Implementing Legislation for the BWC in Eastern Europe 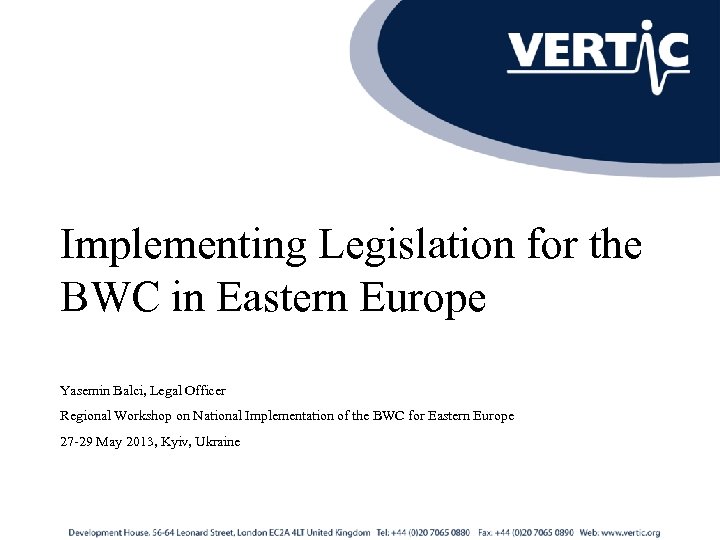 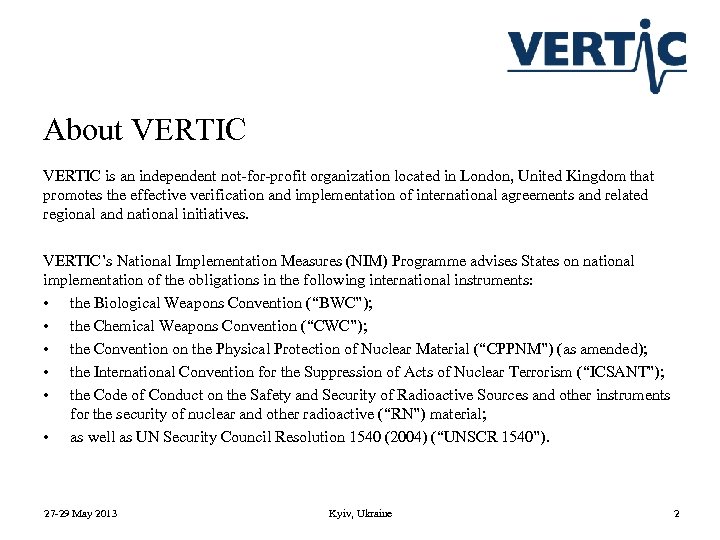 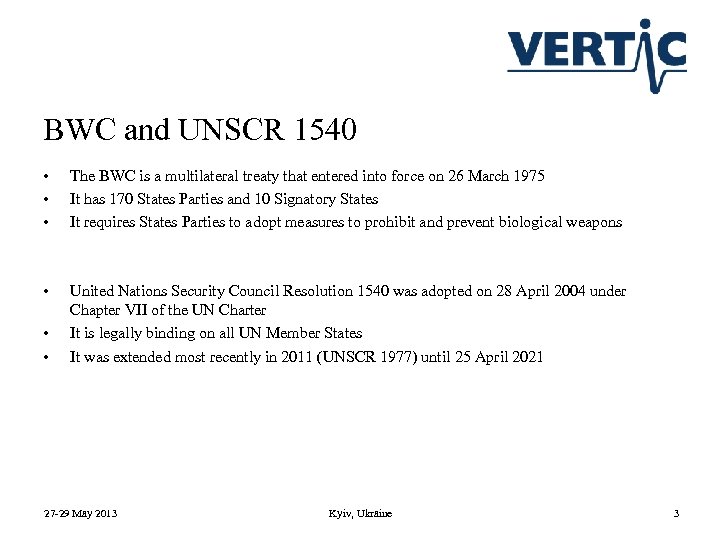 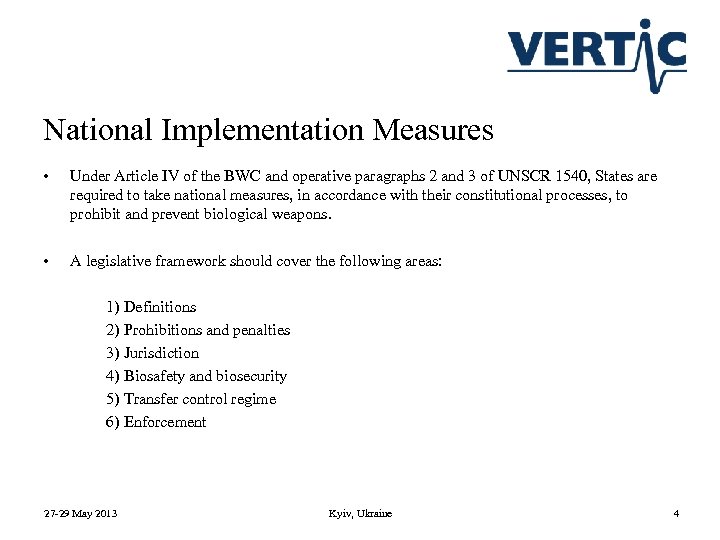 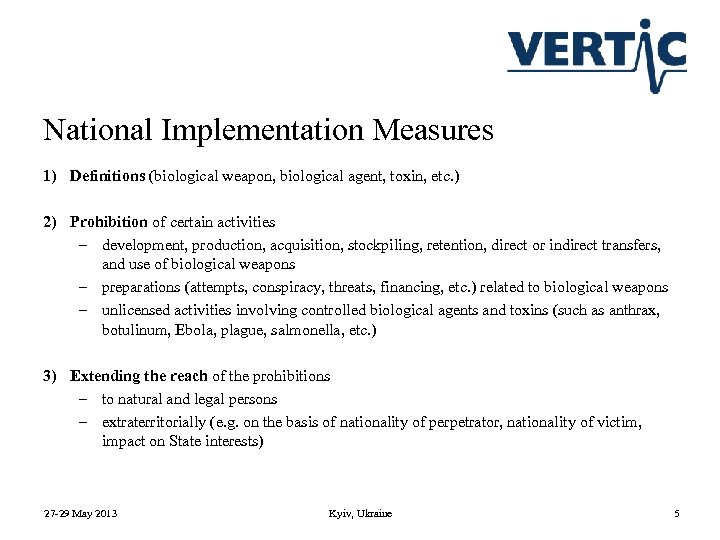 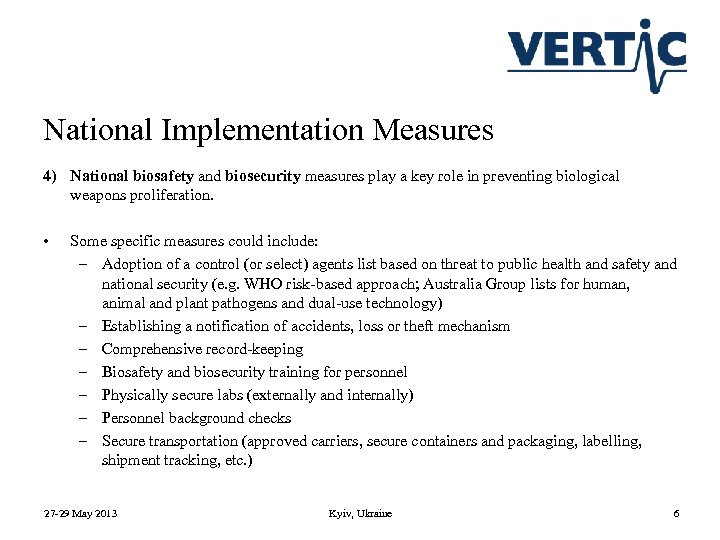 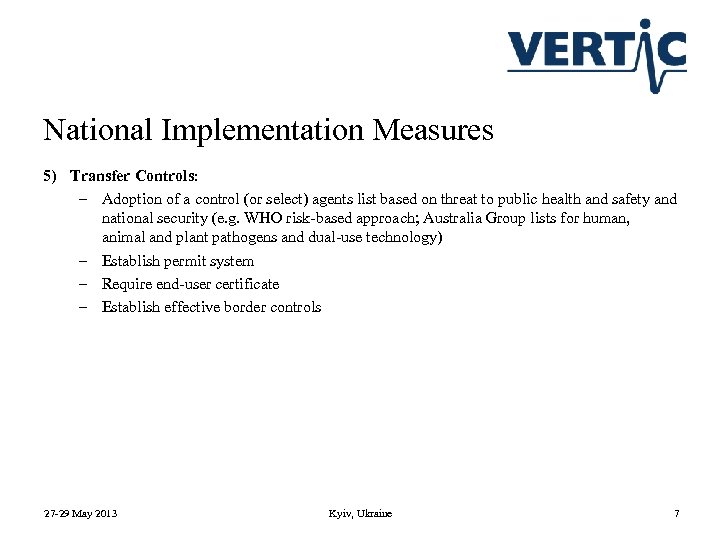 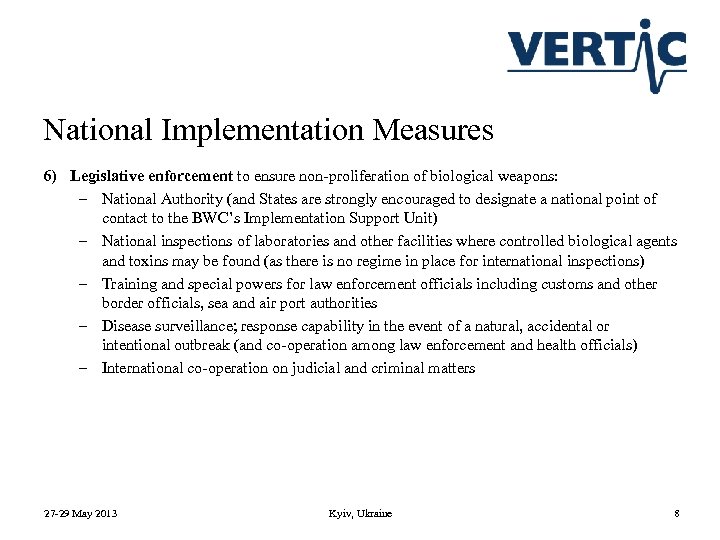 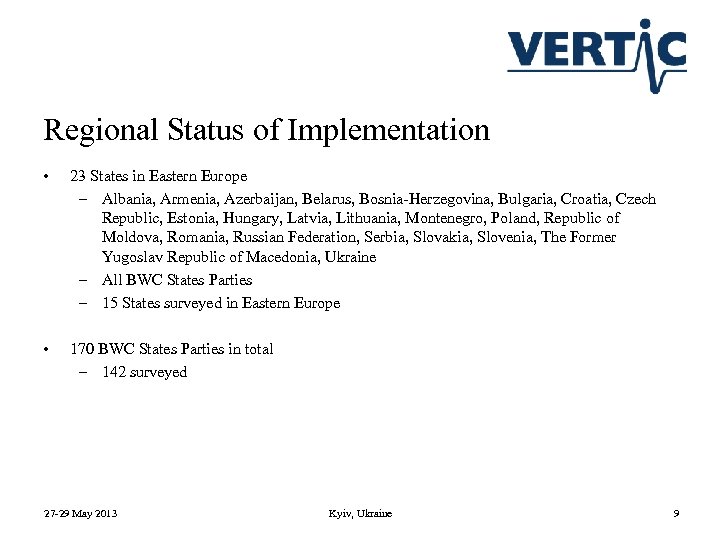 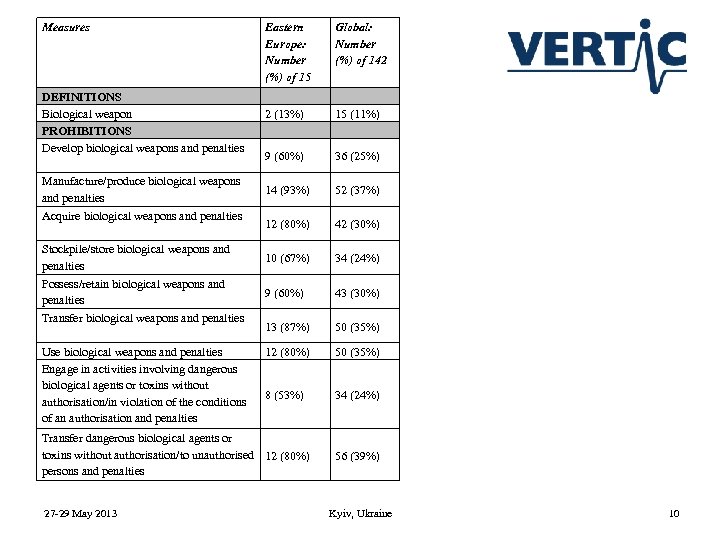 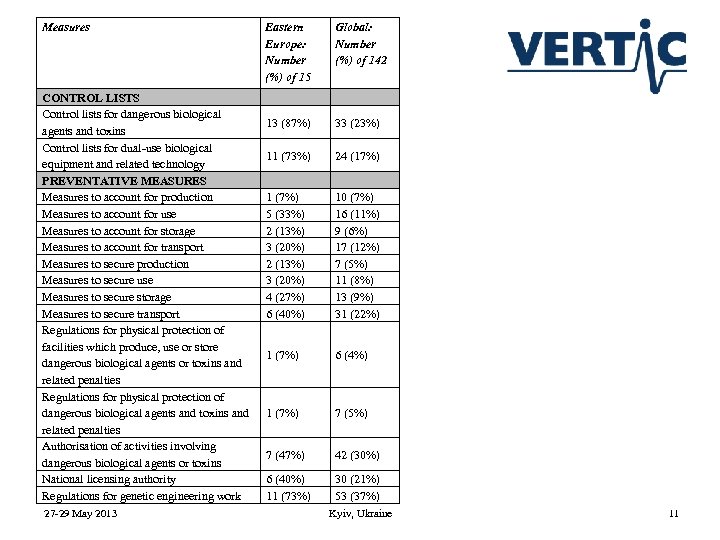 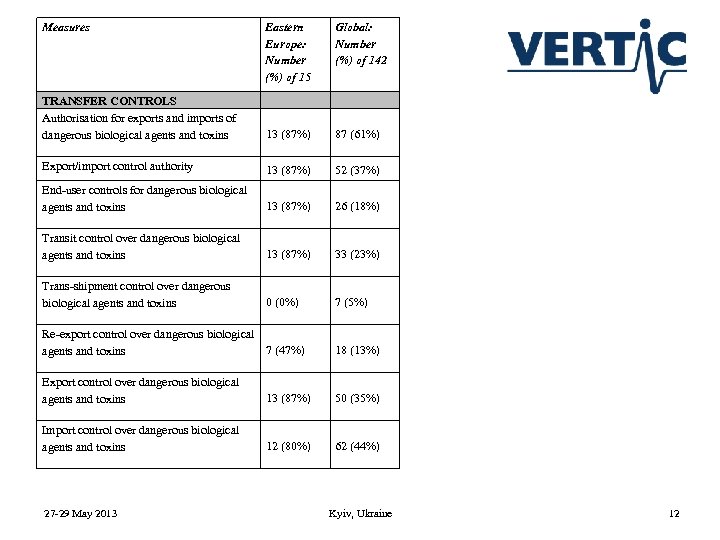 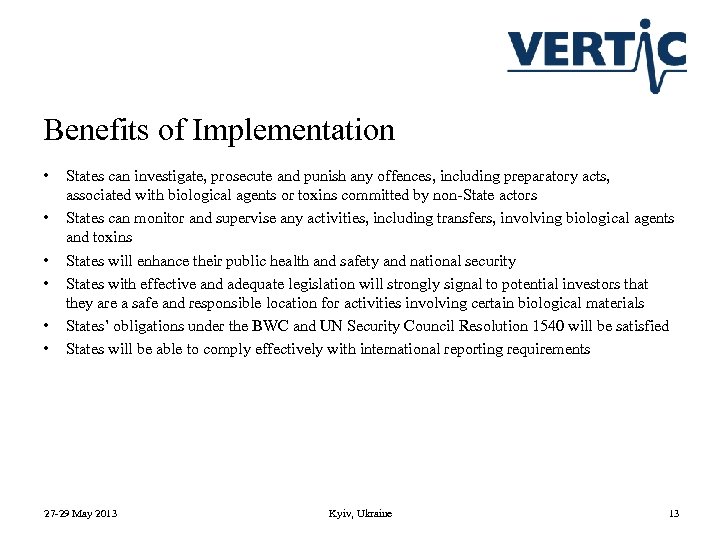 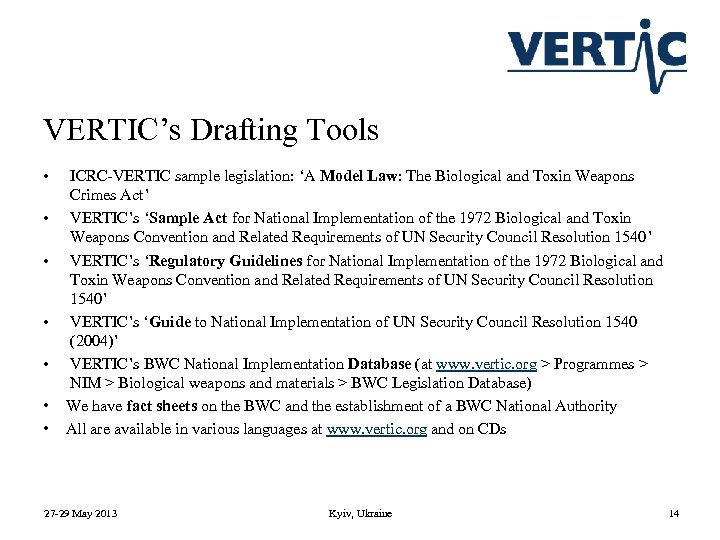 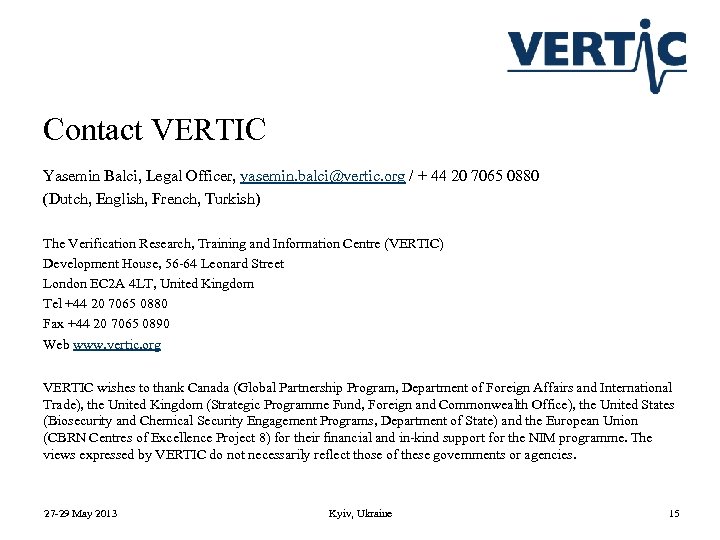 Скачать презентацию Implementing Legislation for the BWC in Eastern Europe

Implementing Legislation for the BWC in Eastern Europe Yasemin Balci, Legal Officer Regional Workshop on National Implementation of the BWC for Eastern Europe 27 -29 May 2013, Kyiv, Ukraine

About VERTIC is an independent not-for-profit organization located in London, United Kingdom that promotes the effective verification and implementation of international agreements and related regional and national initiatives. VERTIC’s National Implementation Measures (NIM) Programme advises States on national implementation of the obligations in the following international instruments: • the Biological Weapons Convention (“BWC”); • the Chemical Weapons Convention (“CWC”); • the Convention on the Physical Protection of Nuclear Material (“CPPNM”) (as amended); • the International Convention for the Suppression of Acts of Nuclear Terrorism (“ICSANT”); • the Code of Conduct on the Safety and Security of Radioactive Sources and other instruments for the security of nuclear and other radioactive (“RN”) material; • as well as UN Security Council Resolution 1540 (2004) (“UNSCR 1540”). 27 -29 May 2013 Kyiv, Ukraine 2

BWC and UNSCR 1540 • • • The BWC is a multilateral treaty that entered into force on 26 March 1975 It has 170 States Parties and 10 Signatory States It requires States Parties to adopt measures to prohibit and prevent biological weapons • United Nations Security Council Resolution 1540 was adopted on 28 April 2004 under Chapter VII of the UN Charter It is legally binding on all UN Member States It was extended most recently in 2011 (UNSCR 1977) until 25 April 2021 • • 27 -29 May 2013 Kyiv, Ukraine 3

National Implementation Measures • Under Article IV of the BWC and operative paragraphs 2 and 3 of UNSCR 1540, States are required to take national measures, in accordance with their constitutional processes, to prohibit and prevent biological weapons. • A legislative framework should cover the following areas: 1) Definitions 2) Prohibitions and penalties 3) Jurisdiction 4) Biosafety and biosecurity 5) Transfer control regime 6) Enforcement 27 -29 May 2013 Kyiv, Ukraine 4

National Implementation Measures 6) Legislative enforcement to ensure non-proliferation of biological weapons: – National Authority (and States are strongly encouraged to designate a national point of contact to the BWC’s Implementation Support Unit) – National inspections of laboratories and other facilities where controlled biological agents and toxins may be found (as there is no regime in place for international inspections) – Training and special powers for law enforcement officials including customs and other border officials, sea and air port authorities – Disease surveillance; response capability in the event of a natural, accidental or intentional outbreak (and co-operation among law enforcement and health officials) – International co-operation on judicial and criminal matters 27 -29 May 2013 Kyiv, Ukraine 8

Benefits of Implementation • • • States can investigate, prosecute and punish any offences, including preparatory acts, associated with biological agents or toxins committed by non-State actors States can monitor and supervise any activities, including transfers, involving biological agents and toxins States will enhance their public health and safety and national security States with effective and adequate legislation will strongly signal to potential investors that they are a safe and responsible location for activities involving certain biological materials States’ obligations under the BWC and UN Security Council Resolution 1540 will be satisfied States will be able to comply effectively with international reporting requirements 27 -29 May 2013 Kyiv, Ukraine 13