Impact of a GM Bankruptcy 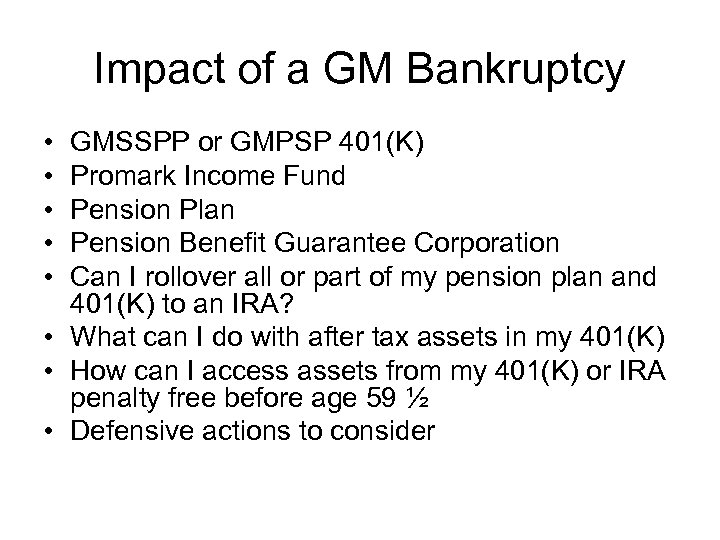 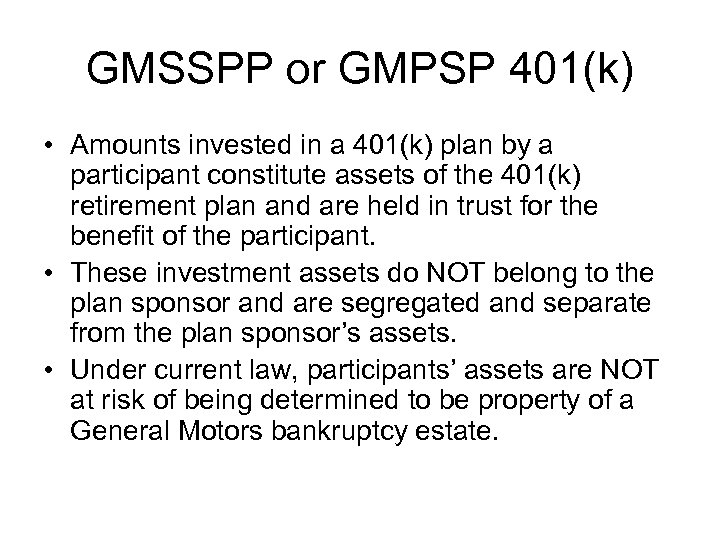 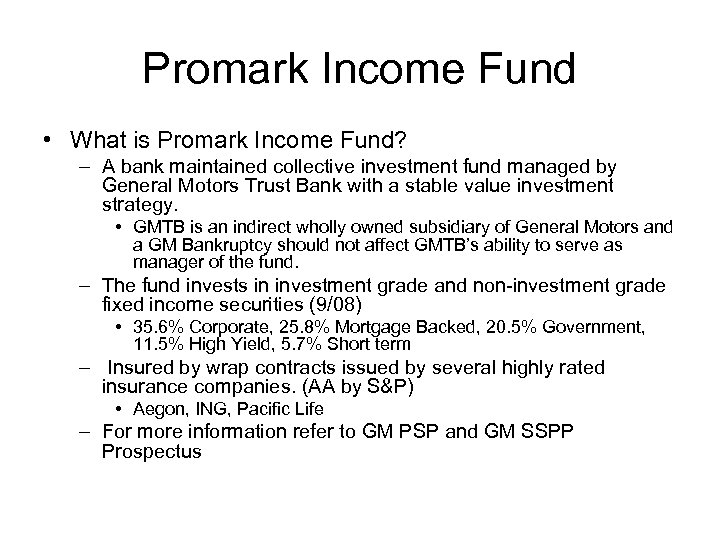 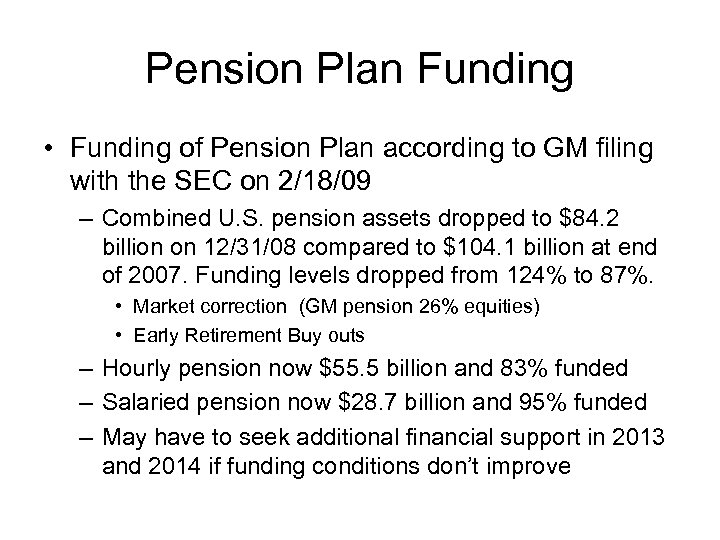 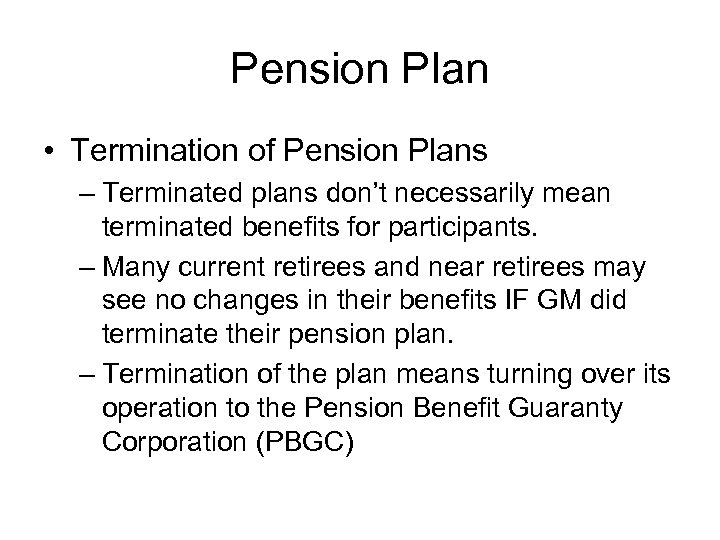 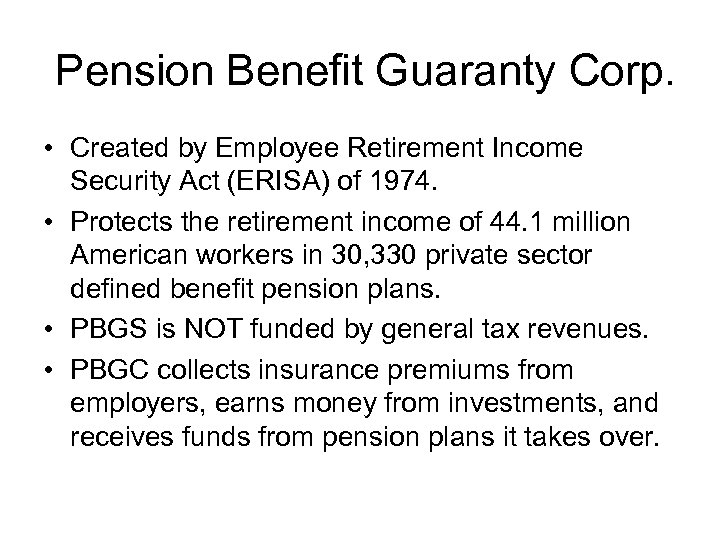 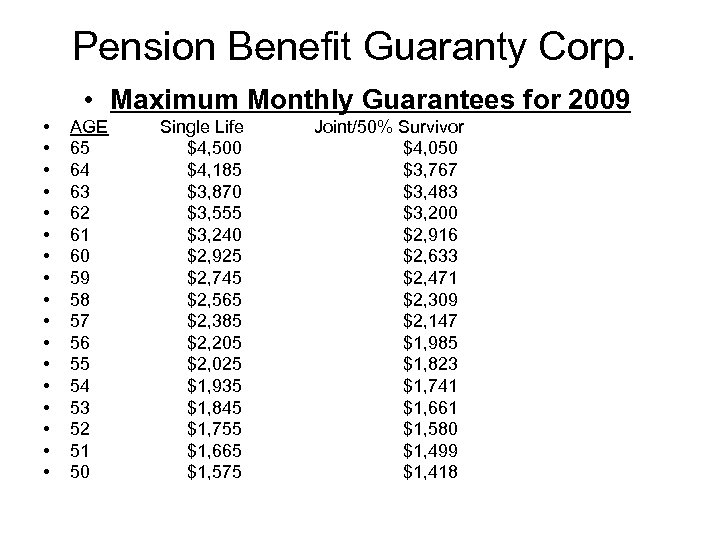 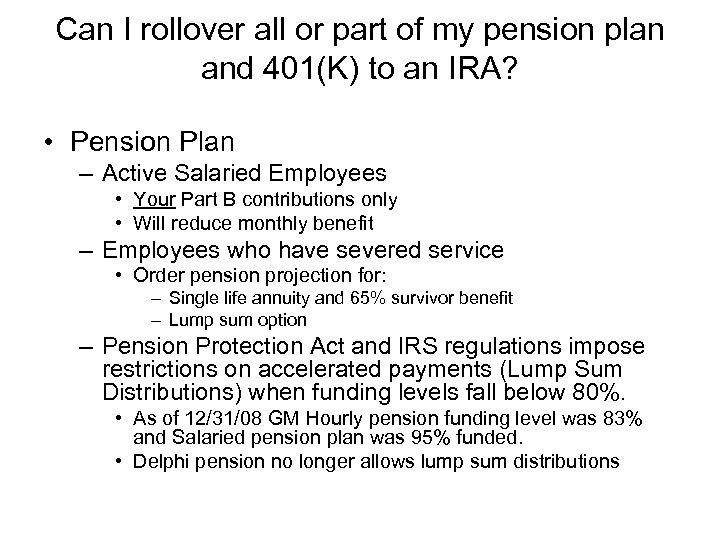 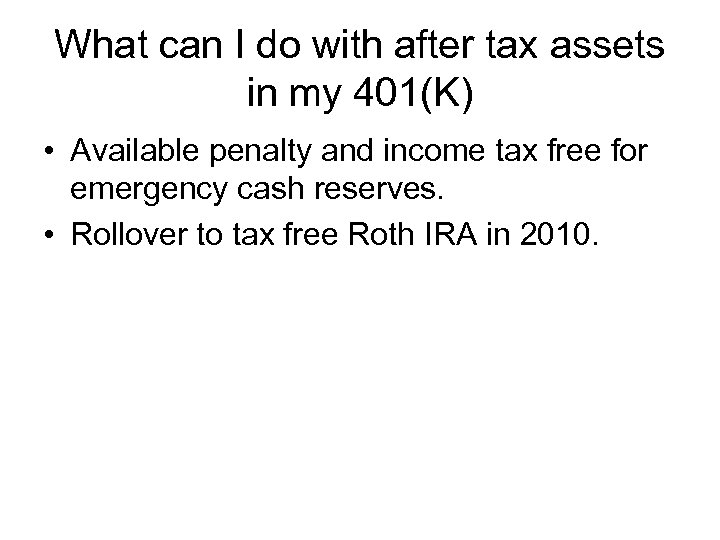 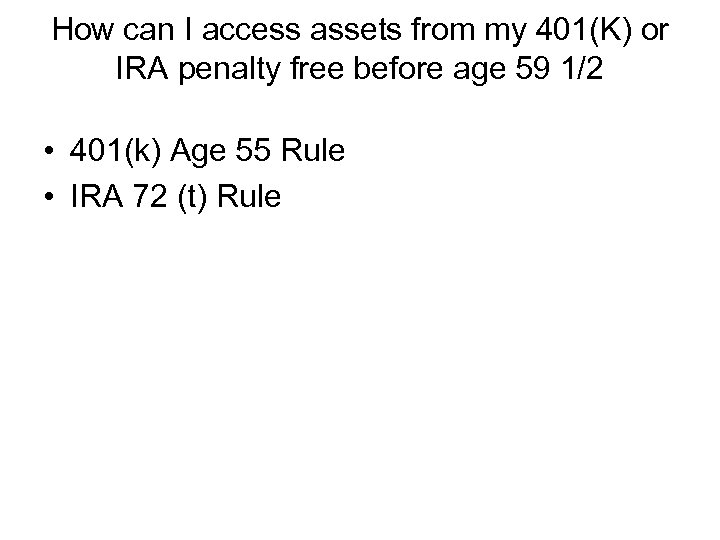 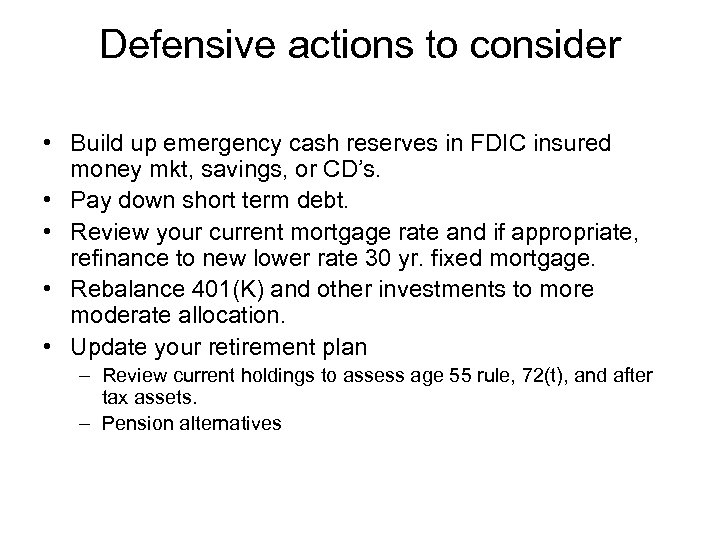 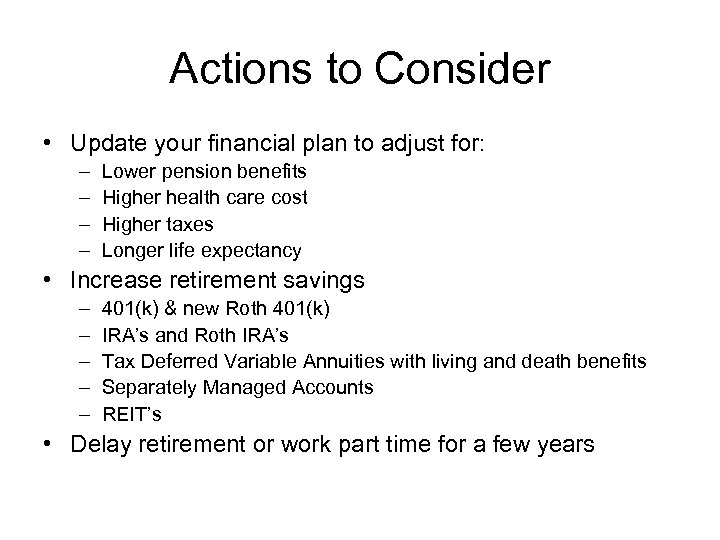 Impact of a GM Bankruptcy • • • GMSSPP or GMPSP 401(K) Promark Income Fund Pension Plan Pension Benefit Guarantee Corporation Can I rollover all or part of my pension plan and 401(K) to an IRA? • What can I do with after tax assets in my 401(K) • How can I access assets from my 401(K) or IRA penalty free before age 59 ½ • Defensive actions to consider

GMSSPP or GMPSP 401(k) • Amounts invested in a 401(k) plan by a participant constitute assets of the 401(k) retirement plan and are held in trust for the benefit of the participant. • These investment assets do NOT belong to the plan sponsor and are segregated and separate from the plan sponsor’s assets. • Under current law, participants’ assets are NOT at risk of being determined to be property of a General Motors bankruptcy estate.

Pension Plan • Will bankruptcy affect my pension? – Much more complex than 401(k) issue – It is possible that GM Bankruptcy will have no current affect of on the pension plan. – Pension plan could continue to operate through bankruptcy proceedings and could continue to be an obligation of a post-bankruptcy GM. – In some cases, bankrupt companies do choose to terminate their pension plans as part of their reorganization.

Pension Plan • Termination of Pension Plans – Terminated plans don’t necessarily mean terminated benefits for participants. – Many current retirees and near retirees may see no changes in their benefits IF GM did terminate their pension plan. – Termination of the plan means turning over its operation to the Pension Benefit Guaranty Corporation (PBGC)

Pension Benefit Guaranty Corp. • If your plan ends without sufficient money to pay all benefits, PBGC will pay you the benefit provided by your plan up to the limits provided by law. • Now pays monthly retirement benefits to about 683, 000 retirees in 3, 595 pension plans that ended. • The maximum pension benefit guaranteed by PBGC is set by law and adjusted yearly. • For plans ended in 2009, workers who retire at age 65 can receive up to $4, 500 per month ($54, 000 yr. ) Single life annuity or $4, 050 per month ($48, 600 yr. ) Joint and 50% Survivor Annuity. The guarantee is lower for those who retire early. The guarantee increase for those who retire after age 65. • For additional information- www. pbgc. gov

Pension Benefit Guaranty Corp. • In a recent interview, the acting director of the PBGC Vince Snowbarger noted that GM is not expected to terminate its pension plan in bankruptcy. • Uncertainties of bankruptcy makes the issue of pension plan termination a very volatile and fluid situation.

Can I rollover all or part of my pension plan and 401(K) to an IRA? • Pension Plan – Active Salaried Employees • Your Part B contributions only • Will reduce monthly benefit – Employees who have severed service • Order pension projection for: – Single life annuity and 65% survivor benefit – Lump sum option – Pension Protection Act and IRS regulations impose restrictions on accelerated payments (Lump Sum Distributions) when funding levels fall below 80%. • As of 12/31/08 GM Hourly pension funding level was 83% and Salaried pension plan was 95% funded. • Delphi pension no longer allows lump sum distributions

What can I do with after tax assets in my 401(K) • Available penalty and income tax free for emergency cash reserves. • Rollover to tax free Roth IRA in 2010.