IMMORALITY ON THE BORDER Lesson 11 for the 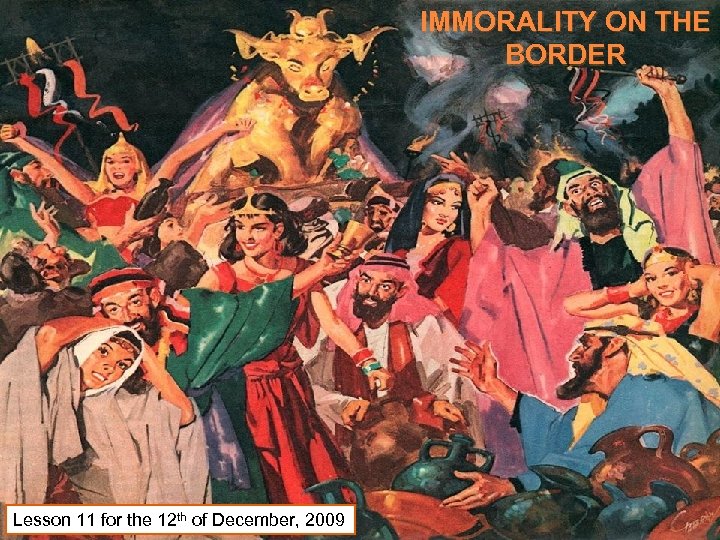 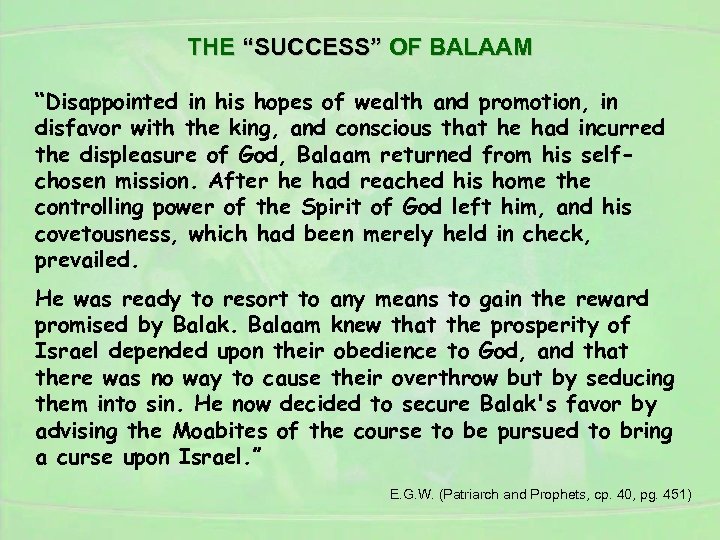 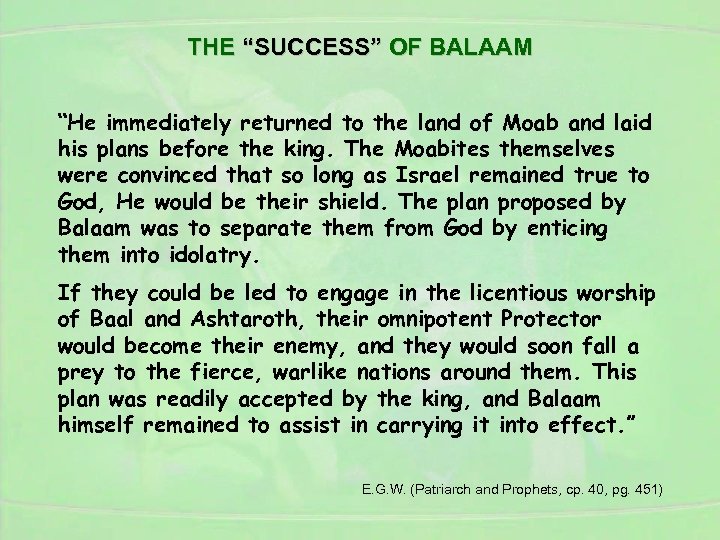 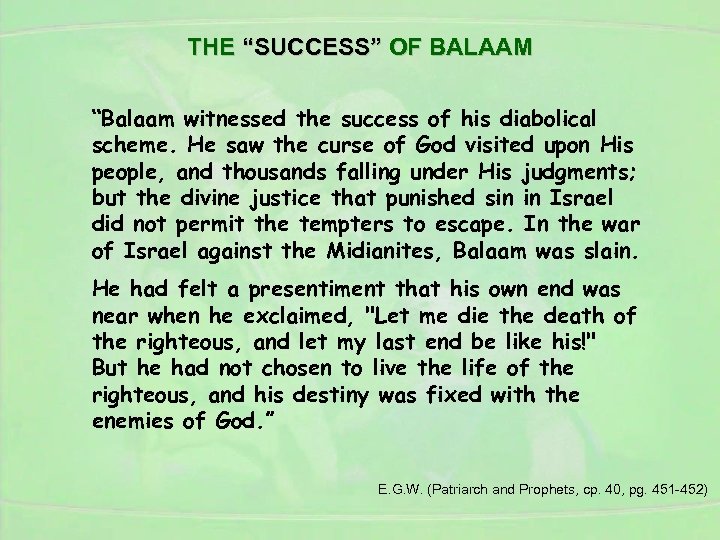 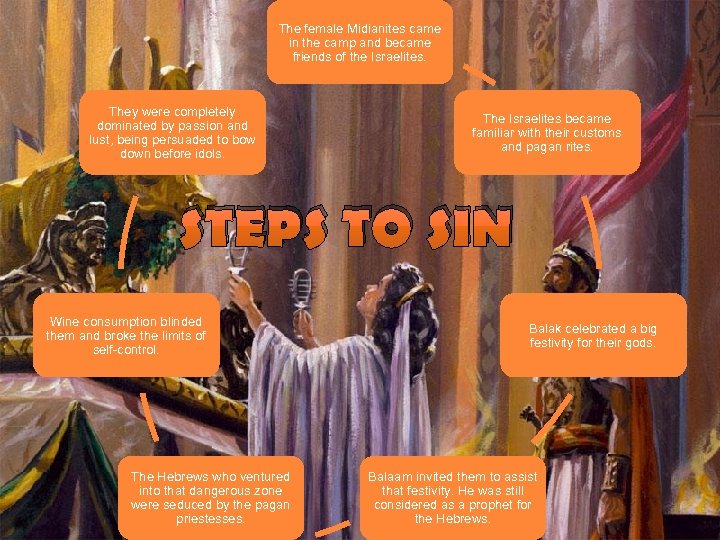 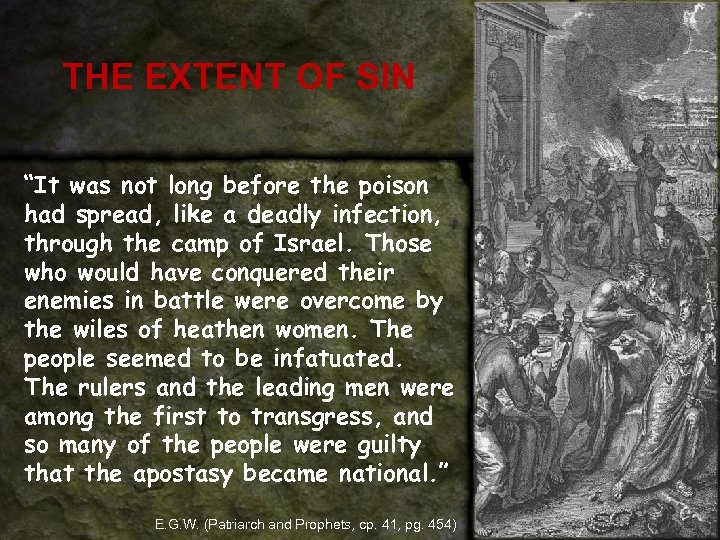 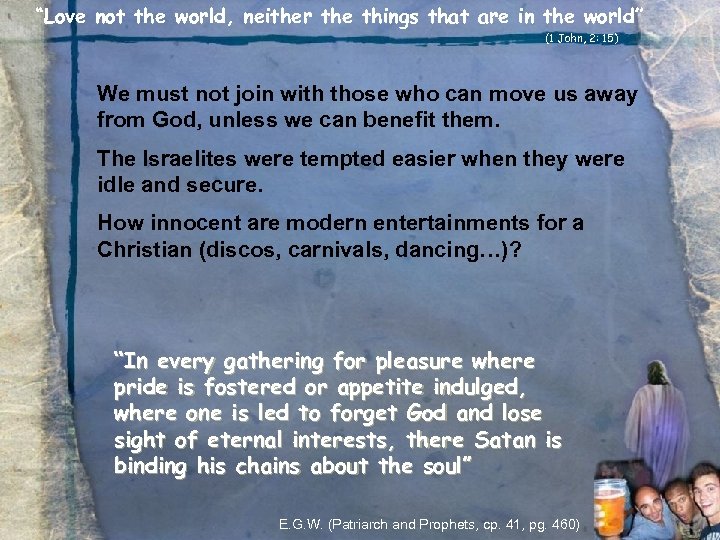 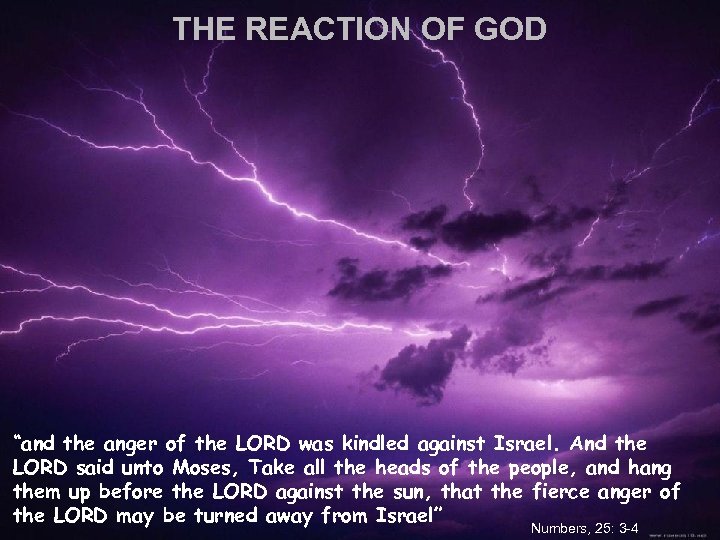 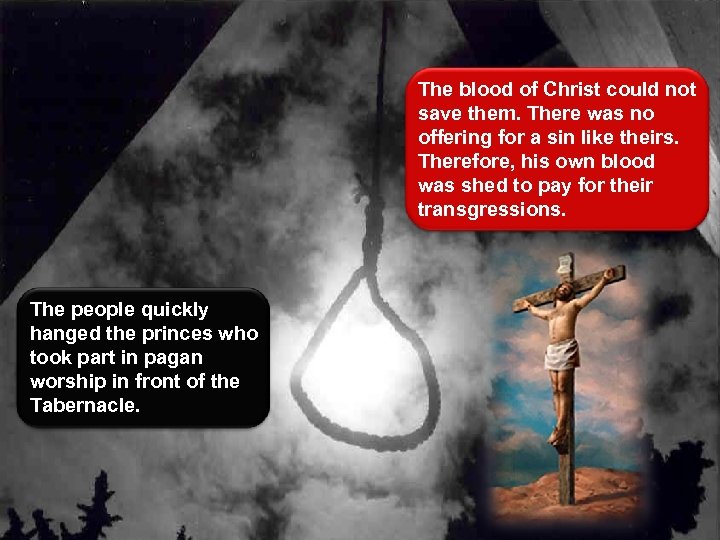 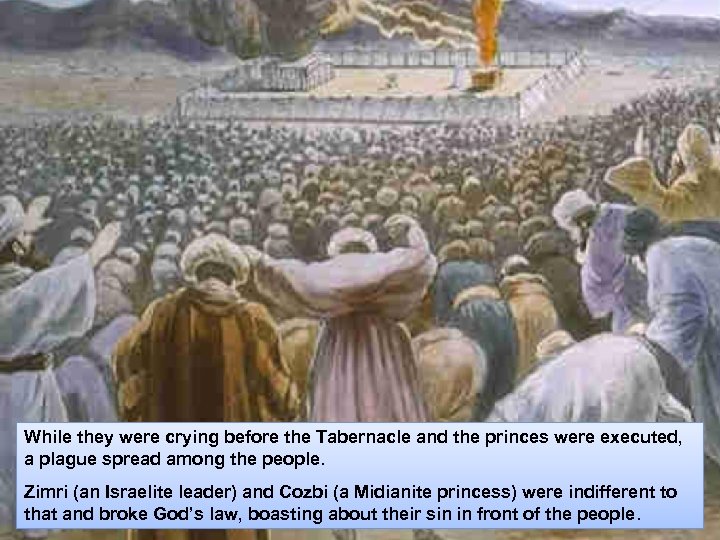 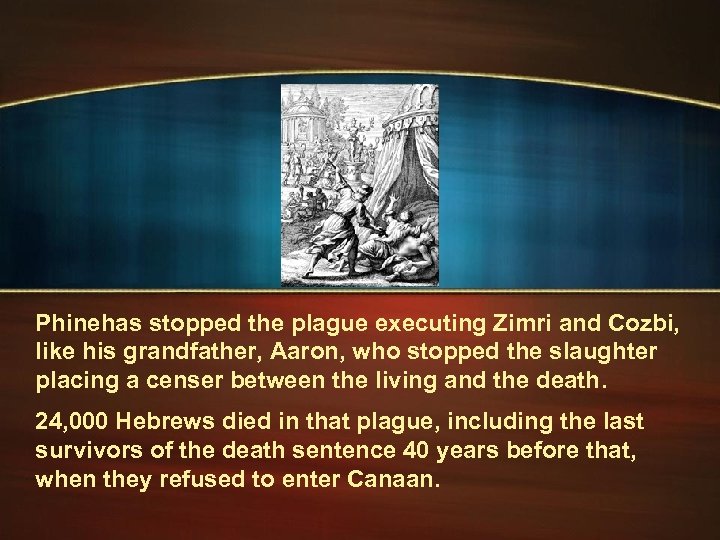 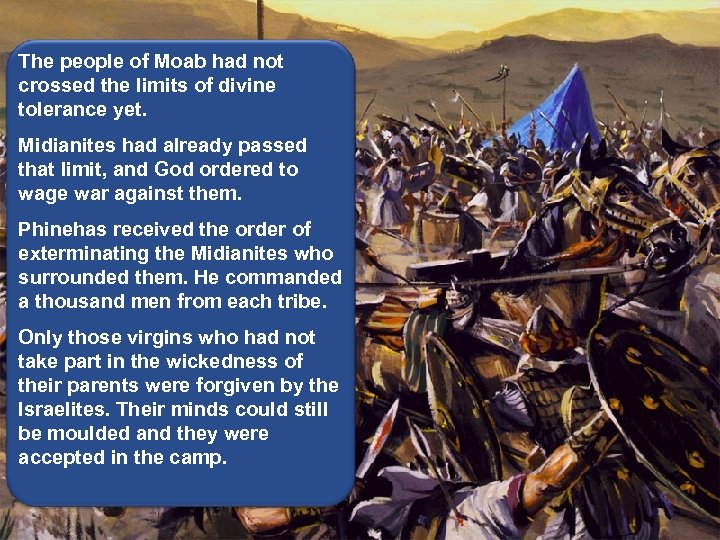 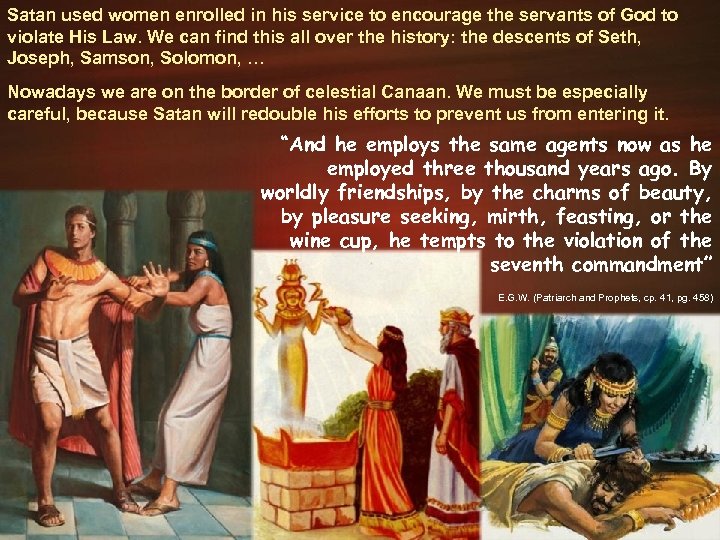 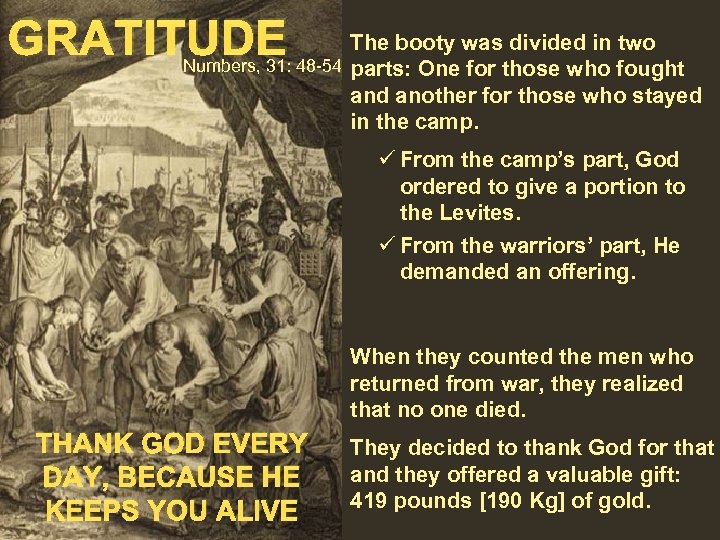 Скачать презентацию IMMORALITY ON THE BORDER Lesson 11 for the

THE “SUCCESS” OF BALAAM “Disappointed in his hopes of wealth and promotion, in disfavor with the king, and conscious that he had incurred the displeasure of God, Balaam returned from his selfchosen mission. After he had reached his home the controlling power of the Spirit of God left him, and his covetousness, which had been merely held in check, prevailed. He was ready to resort to any means to gain the reward promised by Balak. Balaam knew that the prosperity of Israel depended upon their obedience to God, and that there was no way to cause their overthrow but by seducing them into sin. He now decided to secure Balak's favor by advising the Moabites of the course to be pursued to bring a curse upon Israel. ” E. G. W. (Patriarch and Prophets, cp. 40, pg. 451)

THE “SUCCESS” OF BALAAM “He immediately returned to the land of Moab and laid his plans before the king. The Moabites themselves were convinced that so long as Israel remained true to God, He would be their shield. The plan proposed by Balaam was to separate them from God by enticing them into idolatry. If they could be led to engage in the licentious worship of Baal and Ashtaroth, their omnipotent Protector would become their enemy, and they would soon fall a prey to the fierce, warlike nations around them. This plan was readily accepted by the king, and Balaam himself remained to assist in carrying it into effect. ” E. G. W. (Patriarch and Prophets, cp. 40, pg. 451)

THE “SUCCESS” OF BALAAM “Balaam witnessed the success of his diabolical scheme. He saw the curse of God visited upon His people, and thousands falling under His judgments; but the divine justice that punished sin in Israel did not permit the tempters to escape. In the war of Israel against the Midianites, Balaam was slain. He had felt a presentiment that his own end was near when he exclaimed, "Let me die the death of the righteous, and let my last end be like his!" But he had not chosen to live the life of the righteous, and his destiny was fixed with the enemies of God. ” E. G. W. (Patriarch and Prophets, cp. 40, pg. 451 -452)

The female Midianites came in the camp and became friends of the Israelites. They were completely dominated by passion and lust, being persuaded to bow down before idols. The Israelites became familiar with their customs and pagan rites. STEPS TO SIN Wine consumption blinded them and broke the limits of self-control. The Hebrews who ventured into that dangerous zone were seduced by the pagan priestesses. Balak celebrated a big festivity for their gods. Balaam invited them to assist that festivity. He was still considered as a prophet for the Hebrews.

THE EXTENT OF SIN “It was not long before the poison had spread, like a deadly infection, through the camp of Israel. Those who would have conquered their enemies in battle were overcome by the wiles of heathen women. The people seemed to be infatuated. The rulers and the leading men were among the first to transgress, and so many of the people were guilty that the apostasy became national. ” E. G. W. (Patriarch and Prophets, cp. 41, pg. 454)

“Love not the world, neither the things that are in the world” (1 John, 2: 15) We must not join with those who can move us away from God, unless we can benefit them. The Israelites were tempted easier when they were idle and secure. How innocent are modern entertainments for a Christian (discos, carnivals, dancing…)? “In every gathering for pleasure where pride is fostered or appetite indulged, where one is led to forget God and lose sight of eternal interests, there Satan is binding his chains about the soul” E. G. W. (Patriarch and Prophets, cp. 41, pg. 460)

THE REACTION OF GOD “and the anger of the LORD was kindled against Israel. And the LORD said unto Moses, Take all the heads of the people, and hang them up before the LORD against the sun, that the fierce anger of the LORD may be turned away from Israel” Numbers, 25: 3 -4

The blood of Christ could not save them. There was no offering for a sin like theirs. Therefore, his own blood was shed to pay for their transgressions. The people quickly hanged the princes who took part in pagan worship in front of the Tabernacle.

While they were crying before the Tabernacle and the princes were executed, a plague spread among the people. Zimri (an Israelite leader) and Cozbi (a Midianite princess) were indifferent to that and broke God’s law, boasting about their sin in front of the people.

Phinehas stopped the plague executing Zimri and Cozbi, like his grandfather, Aaron, who stopped the slaughter placing a censer between the living and the death. 24, 000 Hebrews died in that plague, including the last survivors of the death sentence 40 years before that, when they refused to enter Canaan.

The people of Moab had not crossed the limits of divine tolerance yet. Midianites had already passed that limit, and God ordered to wage war against them. Phinehas received the order of exterminating the Midianites who surrounded them. He commanded a thousand men from each tribe. Only those virgins who had not take part in the wickedness of their parents were forgiven by the Israelites. Their minds could still be moulded and they were accepted in the camp.

Satan used women enrolled in his service to encourage the servants of God to violate His Law. We can find this all over the history: the descents of Seth, Joseph, Samson, Solomon, … Nowadays we are on the border of celestial Canaan. We must be especially careful, because Satan will redouble his efforts to prevent us from entering it. “And he employs the same agents now as he employed three thousand years ago. By worldly friendships, by the charms of beauty, by pleasure seeking, mirth, feasting, or the wine cup, he tempts to the violation of the seventh commandment” E. G. W. (Patriarch and Prophets, cp. 41, pg. 458)

GRATITUDE The booty was divided in two Numbers, 31: 48 -54 parts: One for those who fought and another for those who stayed in the camp. ü From the camp’s part, God ordered to give a portion to the Levites. ü From the warriors’ part, He demanded an offering. When they counted the men who returned from war, they realized that no one died. THANK GOD EVERY DAY, BECAUSE HE KEEPS YOU ALIVE They decided to thank God for that and they offered a valuable gift: 419 pounds [190 Kg] of gold.