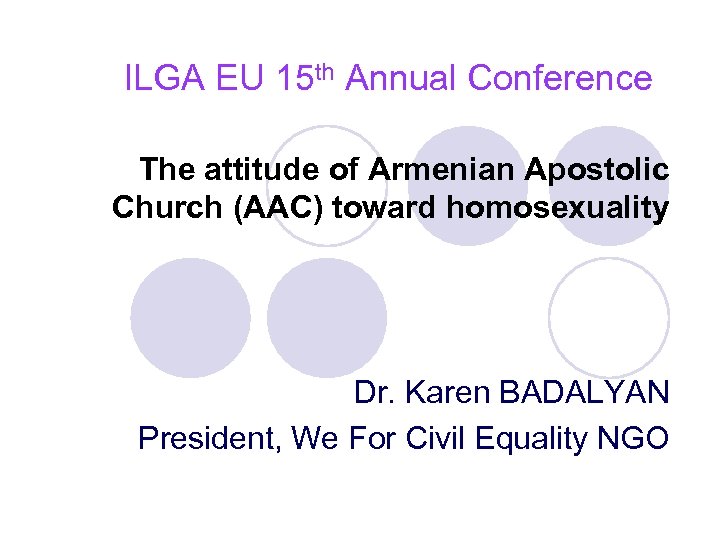 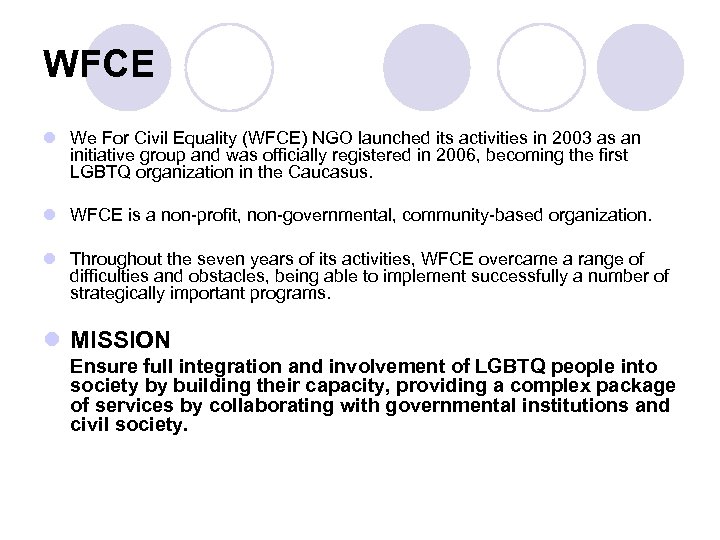 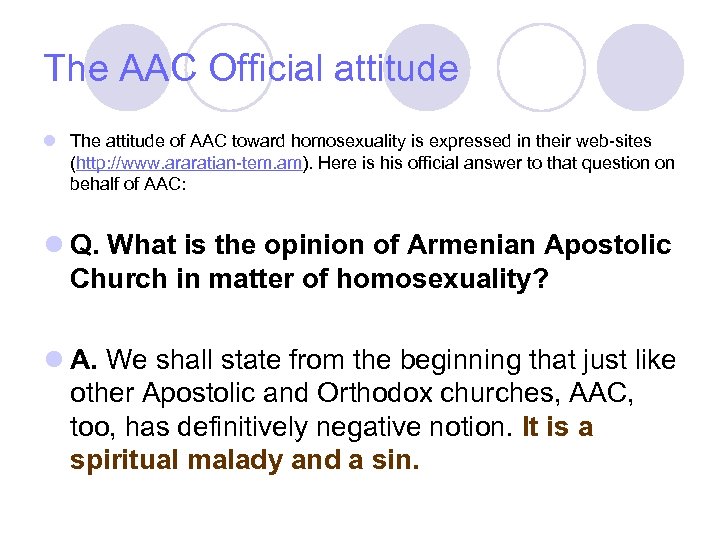 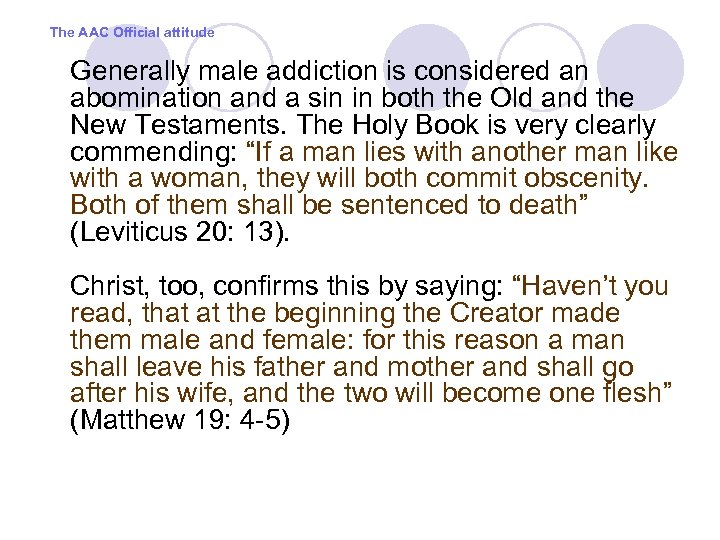 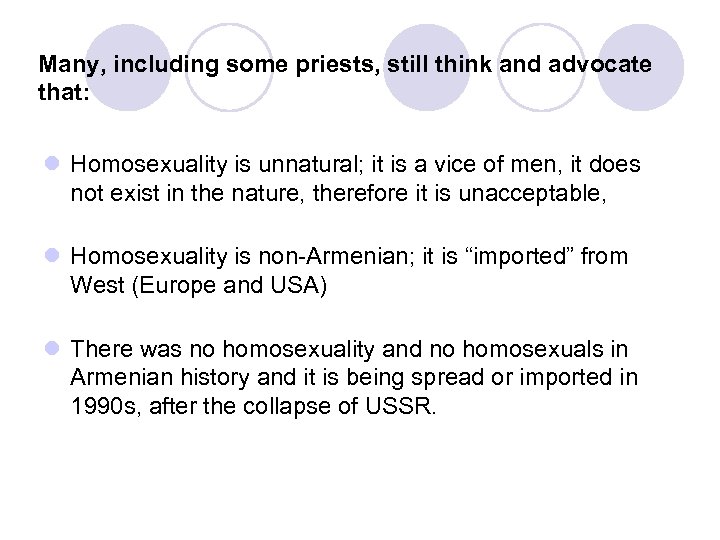 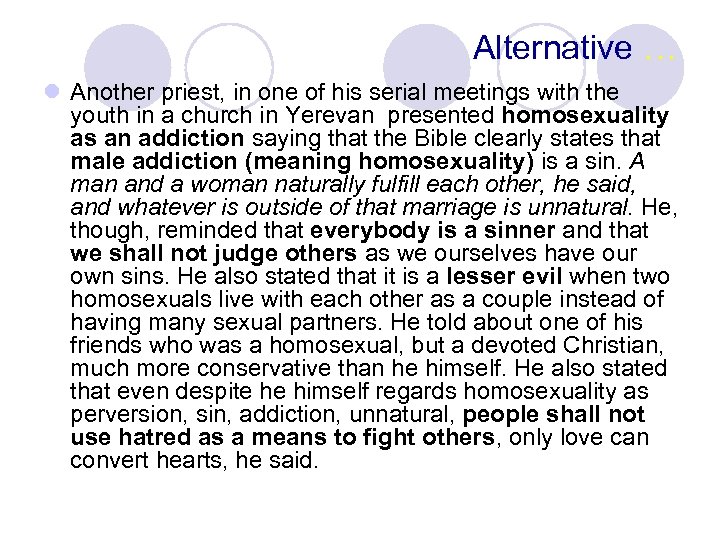 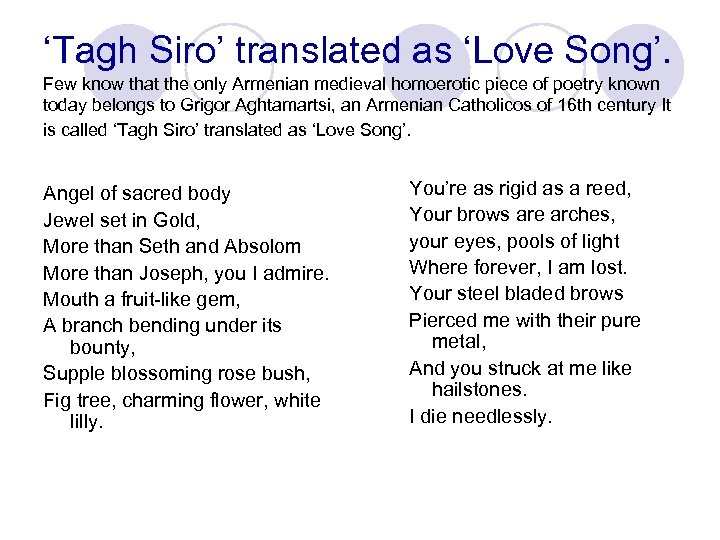 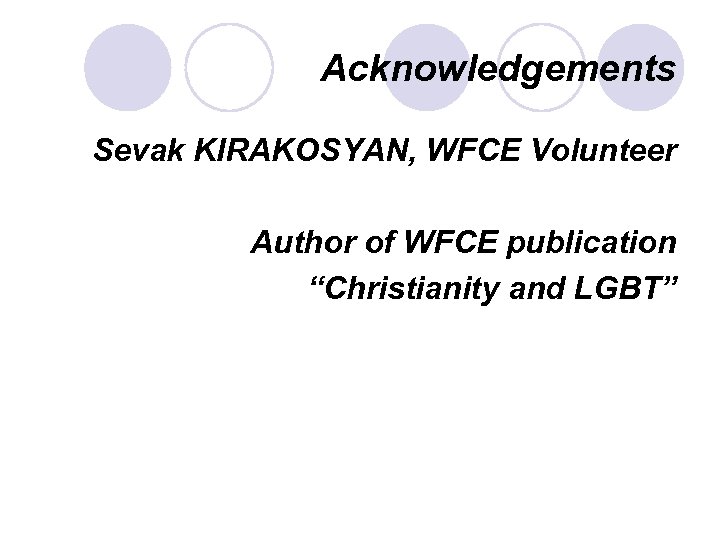 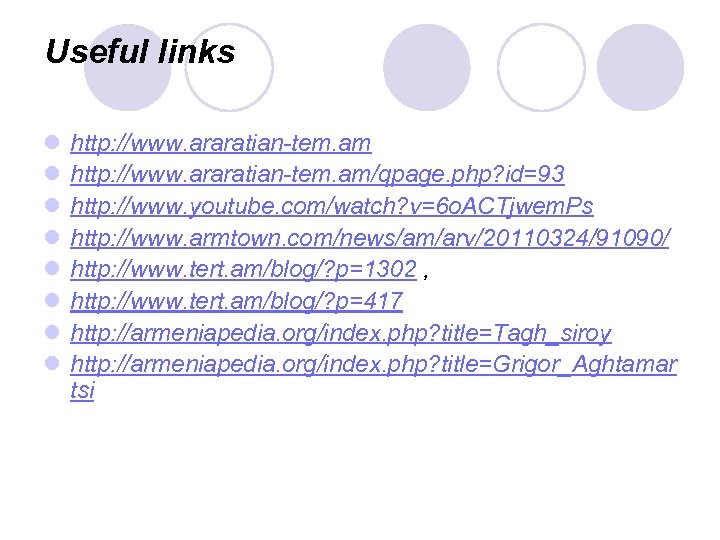 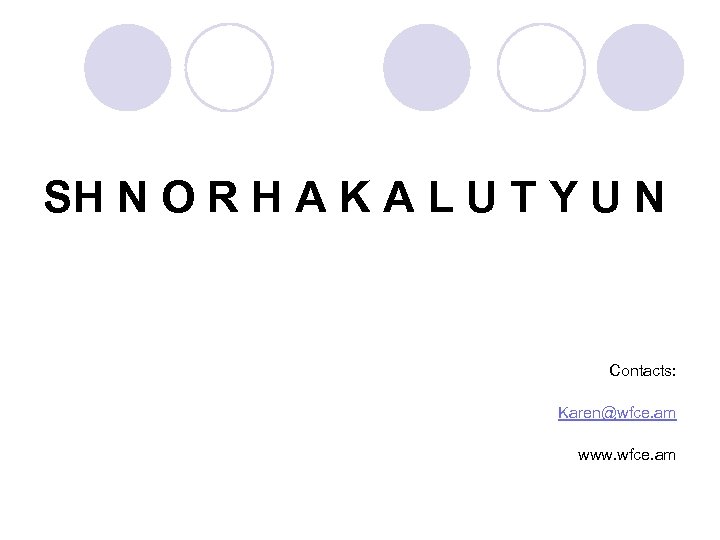 WFCE l We For Civil Equality (WFCE) NGO launched its activities in 2003 as an initiative group and was officially registered in 2006, becoming the first LGBTQ organization in the Caucasus. l WFCE is a non-profit, non-governmental, community-based organization. l Throughout the seven years of its activities, WFCE overcame a range of difficulties and obstacles, being able to implement successfully a number of strategically important programs. l MISSION Ensure full integration and involvement of LGBTQ people into society by building their capacity, providing a complex package of services by collaborating with governmental institutions and civil society.

The AAC Official attitude l The attitude of AAC toward homosexuality is expressed in their web-sites (http: //www. araratian-tem. am). Here is his official answer to that question on behalf of AAC: l Q. What is the opinion of Armenian Apostolic Church in matter of homosexuality? l A. We shall state from the beginning that just like other Apostolic and Orthodox churches, AAC, too, has definitively negative notion. It is a spiritual malady and a sin.

The AAC Official attitude Generally male addiction is considered an abomination and a sin in both the Old and the New Testaments. The Holy Book is very clearly commending: “If a man lies with another man like with a woman, they will both commit obscenity. Both of them shall be sentenced to death” (Leviticus 20: 13). Christ, too, confirms this by saying: “Haven’t you read, that at the beginning the Creator made them male and female: for this reason a man shall leave his father and mother and shall go after his wife, and the two will become one flesh” (Matthew 19: 4 -5)

Many, including some priests, still think and advocate that: l Homosexuality is unnatural; it is a vice of men, it does not exist in the nature, therefore it is unacceptable, l Homosexuality is non-Armenian; it is “imported” from West (Europe and USA) l There was no homosexuality and no homosexuals in Armenian history and it is being spread or imported in 1990 s, after the collapse of USSR.

Alternative … l Another priest, in one of his serial meetings with the youth in a church in Yerevan presented homosexuality as an addiction saying that the Bible clearly states that male addiction (meaning homosexuality) is a sin. A man and a woman naturally fulfill each other, he said, and whatever is outside of that marriage is unnatural. He, though, reminded that everybody is a sinner and that we shall not judge others as we ourselves have our own sins. He also stated that it is a lesser evil when two homosexuals live with each other as a couple instead of having many sexual partners. He told about one of his friends who was a homosexual, but a devoted Christian, much more conservative than he himself. He also stated that even despite he himself regards homosexuality as perversion, sin, addiction, unnatural, people shall not use hatred as a means to fight others, only love can convert hearts, he said.

‘Tagh Siro’ translated as ‘Love Song’. Few know that the only Armenian medieval homoerotic piece of poetry known today belongs tօ Grigor Aghtamartsi, an Armenian Catholicos of 16 th century It is called ‘Tagh Siro’ translated as ‘Love Song’. Angel of sacred body Jewel set in Gold, More than Seth and Absolom More than Joseph, you I admire. Mouth a fruit-like gem, A branch bending under its bounty, Supple blossoming rose bush, Fig tree, charming flower, white lilly. You’re as rigid as a reed, Your brows are arches, your eyes, pools of light Where forever, I am lost. Your steel bladed brows Pierced me with their pure metal, And you struck at me like hailstones. I die needlessly.