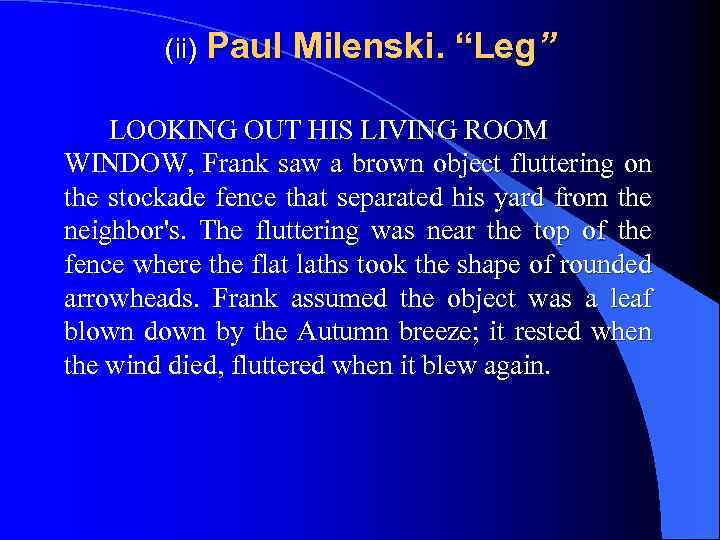 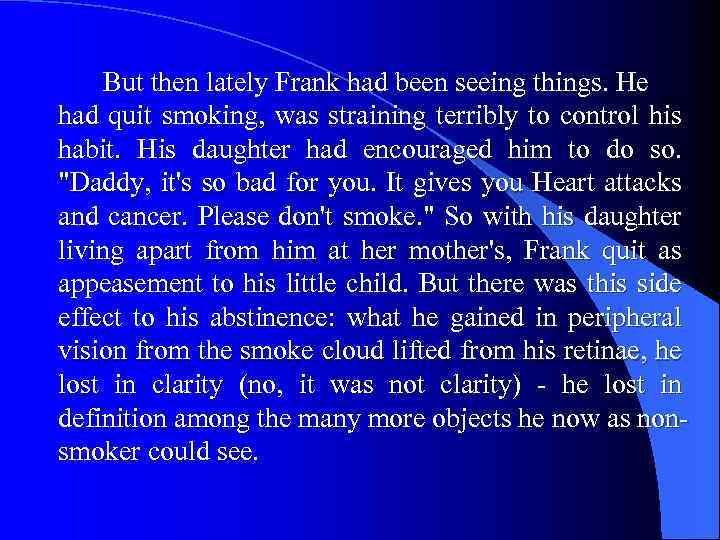 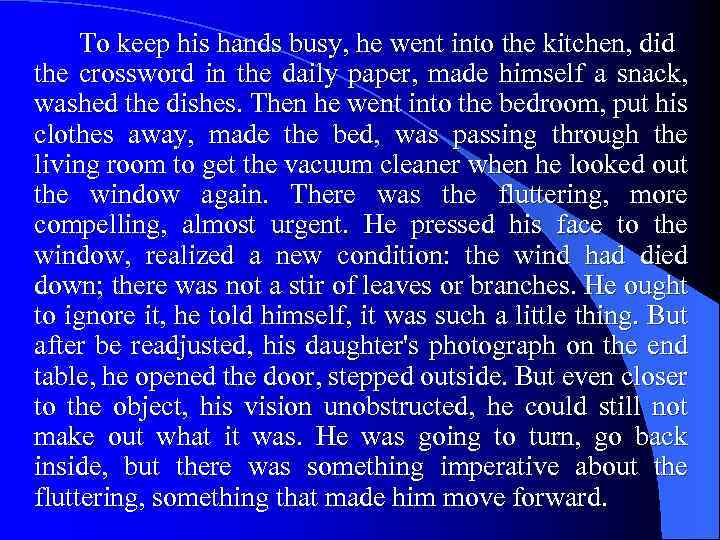 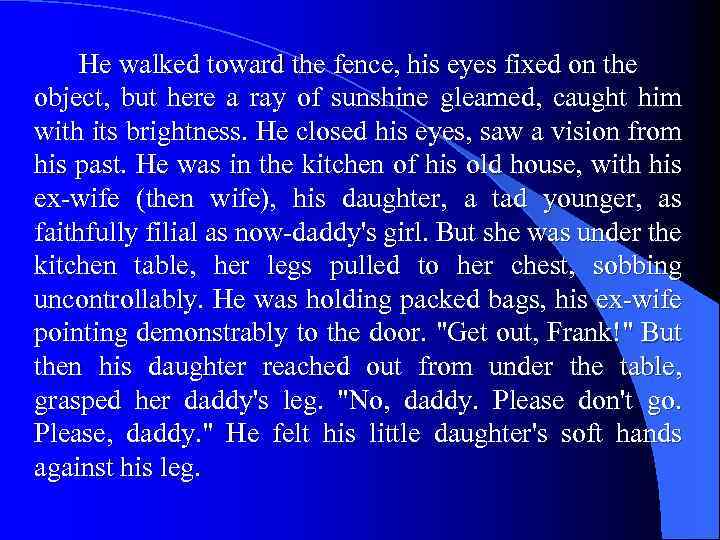 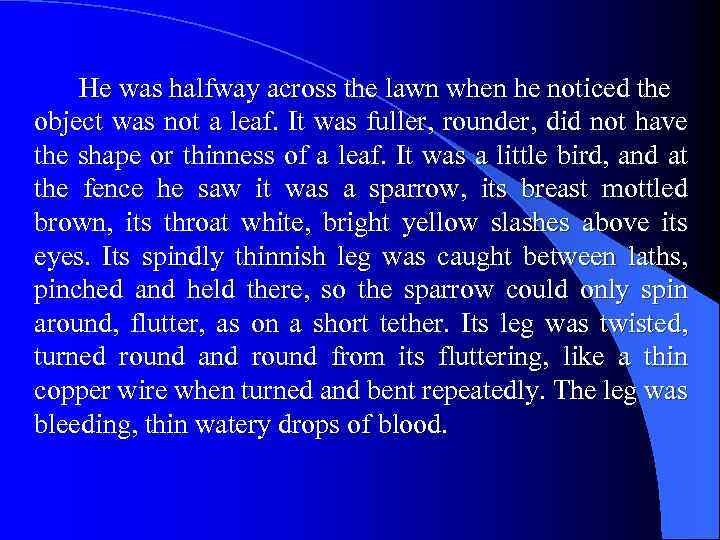 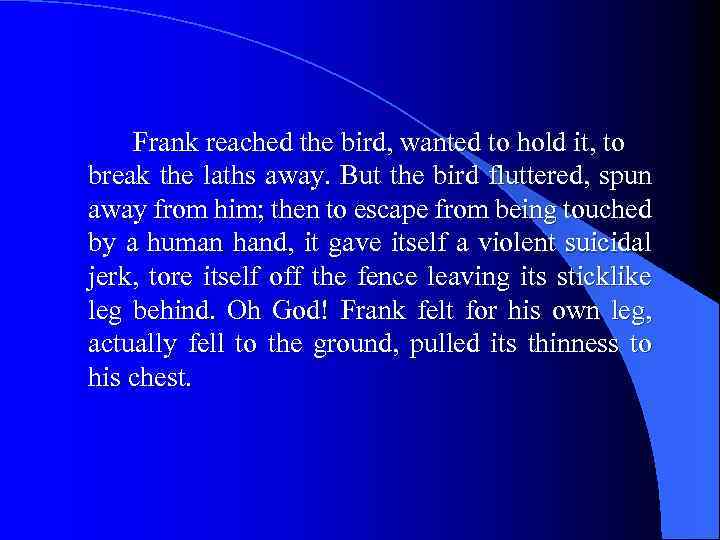 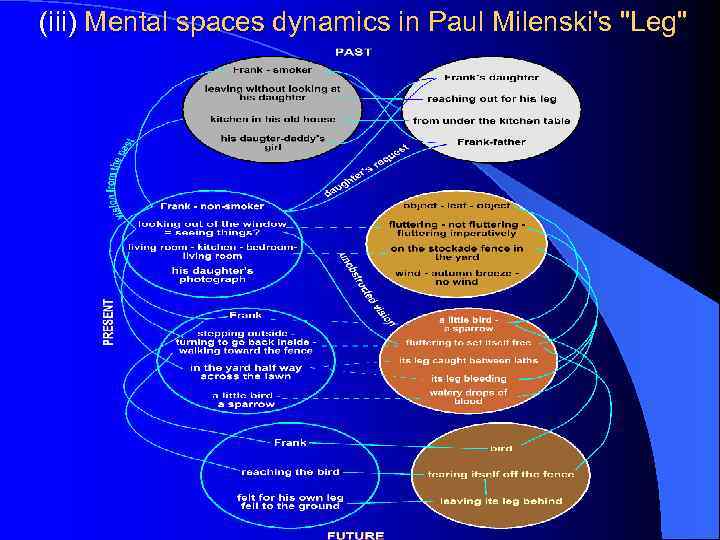 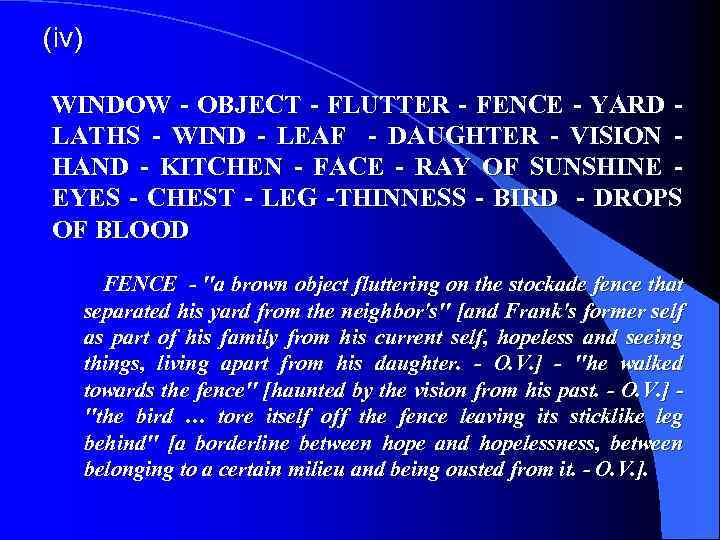 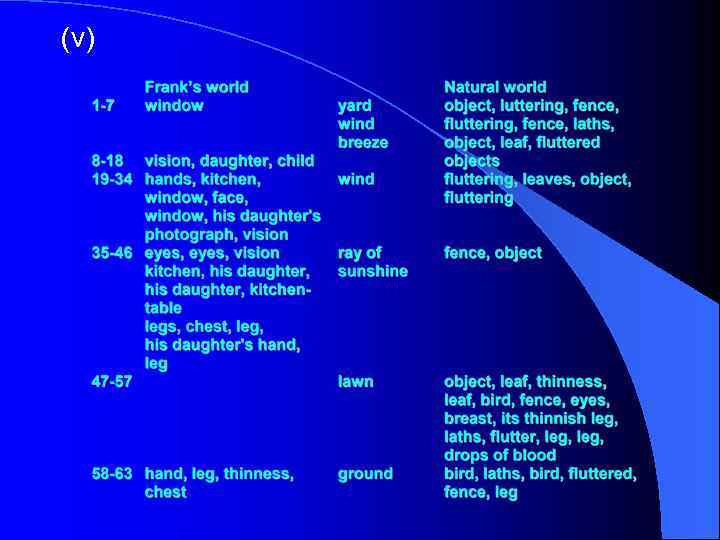 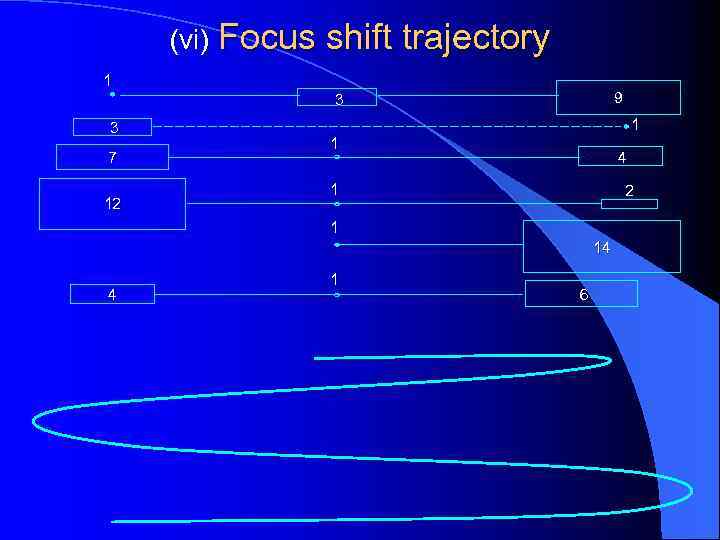 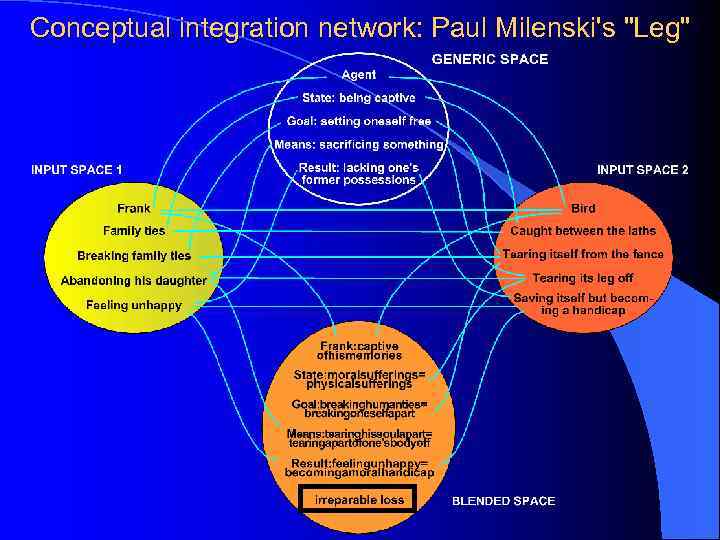 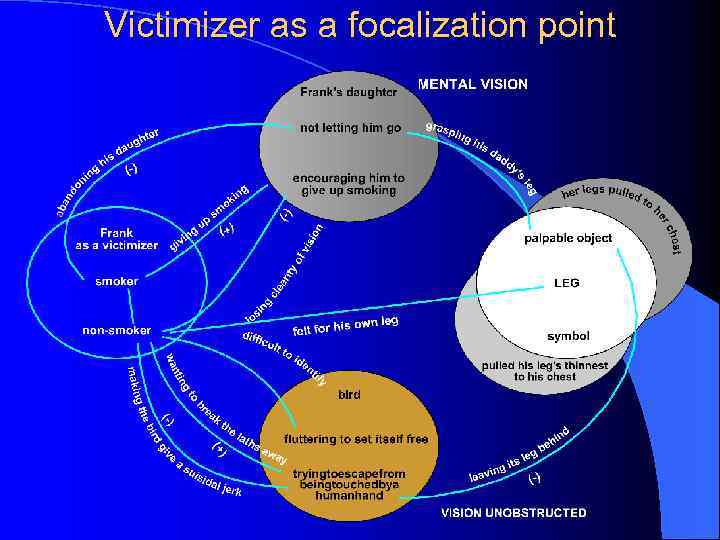 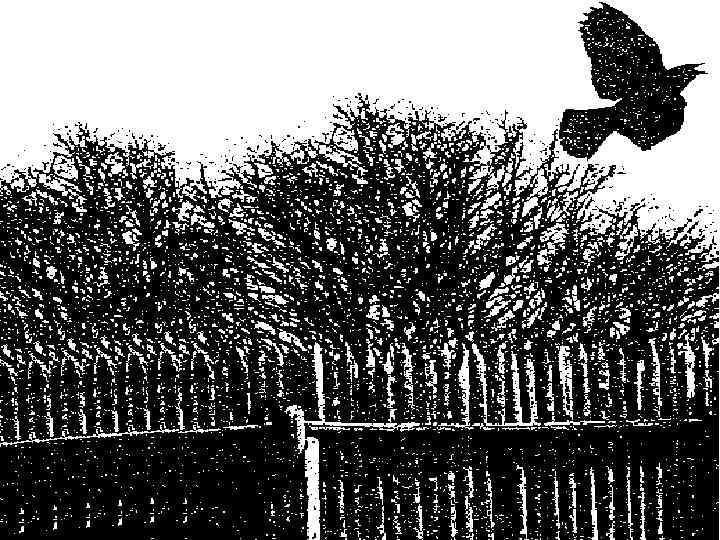 (ii) Paul Milenski. “Leg” LOOKING OUT HIS LIVING ROOM WINDOW, Frank saw a brown object fluttering on the stockade fence that separated his yard from the neighbor's. The fluttering was near the top of the fence where the flat laths took the shape of rounded arrowheads. Frank assumed the object was a leaf blown down by the Autumn breeze; it rested when the wind died, fluttered when it blew again.

But then lately Frank had been seeing things. He had quit smoking, was straining terribly to control his habit. His daughter had encouraged him to do so. "Daddy, it's so bad for you. It gives you Heart attacks and cancer. Please don't smoke. " So with his daughter living apart from him at her mother's, Frank quit as appeasement to his little child. But there was this side effect to his abstinence: what he gained in peripheral vision from the smoke cloud lifted from his retinae, he lost in clarity (no, it was not clarity) - he lost in definition among the many more objects he now as nonsmoker could see.

To keep his hands busy, he went into the kitchen, did the crossword in the daily paper, made himself a snack, washed the dishes. Then he went into the bedroom, put his clothes away, made the bed, was passing through the living room to get the vacuum cleaner when he looked out the window again. There was the fluttering, more compelling, almost urgent. He pressed his face to the window, realized a new condition: the wind had died down; there was not a stir of leaves or branches. He ought to ignore it, he told himself, it was such a little thing. But after be readjusted, his daughter's photograph on the end table, he opened the door, stepped outside. But even closer to the object, his vision unobstructed, he could still not make out what it was. He was going to turn, go back inside, but there was something imperative about the fluttering, something that made him move forward.

He walked toward the fence, his eyes fixed on the object, but here a ray of sunshine gleamed, caught him with its brightness. He closed his eyes, saw a vision from his past. He was in the kitchen of his old house, with his ex-wife (then wife), his daughter, a tad younger, as faithfully filial as now-daddy's girl. But she was under the kitchen table, her legs pulled to her chest, sobbing uncontrollably. He was holding packed bags, his ex-wife pointing demonstrably to the door. "Get out, Frank!" But then his daughter reached out from under the table, grasped her daddy's leg. "No, daddy. Please don't go. Please, daddy. " He felt his little daughter's soft hands against his leg.

He was halfway across the lawn when he noticed the object was not a leaf. It was fuller, rounder, did not have the shape or thinness of a leaf. It was a little bird, and at the fence he saw it was a sparrow, its breast mottled brown, its throat white, bright yellow slashes above its eyes. Its spindly thinnish leg was caught between laths, pinched and held there, so the sparrow could only spin around, flutter, as on a short tether. Its leg was twisted, turned round and round from its fluttering, like a thin copper wire when turned and bent repeatedly. The leg was bleeding, thin watery drops of blood.

Frank reached the bird, wanted to hold it, to break the laths away. But the bird fluttered, spun away from him; then to escape from being touched by a human hand, it gave itself a violent suicidal jerk, tore itself off the fence leaving its sticklike leg behind. Oh God! Frank felt for his own leg, actually fell to the ground, pulled its thinness to his chest.

(iv) WINDOW - OBJECT - FLUTTER - FENCE - YARD LATHS - WIND - LEAF - DAUGHTER - VISION HAND - KITCHEN - FACE - RAY OF SUNSHINE EYES - CHEST - LEG -THINNESS - BIRD - DROPS OF BLOOD FENCE - "a brown object fluttering on the stockade fence that separated his yard from the neighbor's" [and Frank's former self as part of his family from his current self, hopeless and seeing things, living apart from his daughter. - O. V. ] - "he walked towards the fence" [haunted by the vision from his past. - O. V. ] "the bird … tore itself off the fence leaving its sticklike leg behind" [a borderline between hope and hopelessness, between belonging to a certain milieu and being ousted from it. - O. V. ].

Victimizer as a focalization point