I Don t Want No Corny Man A Gospel 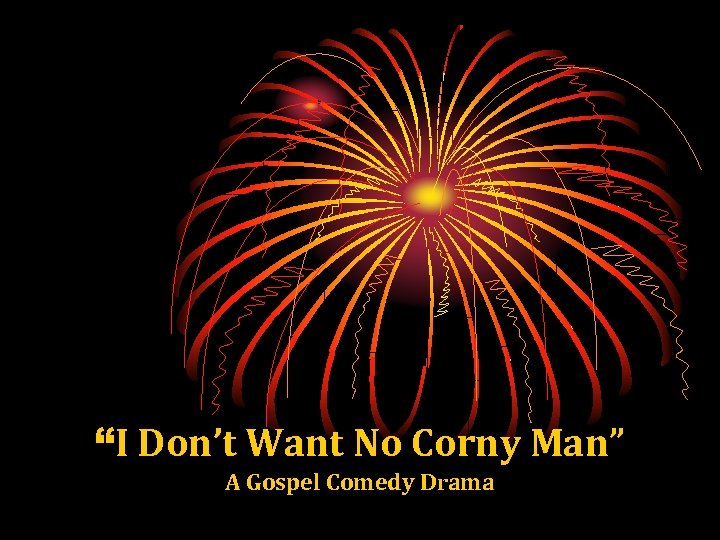 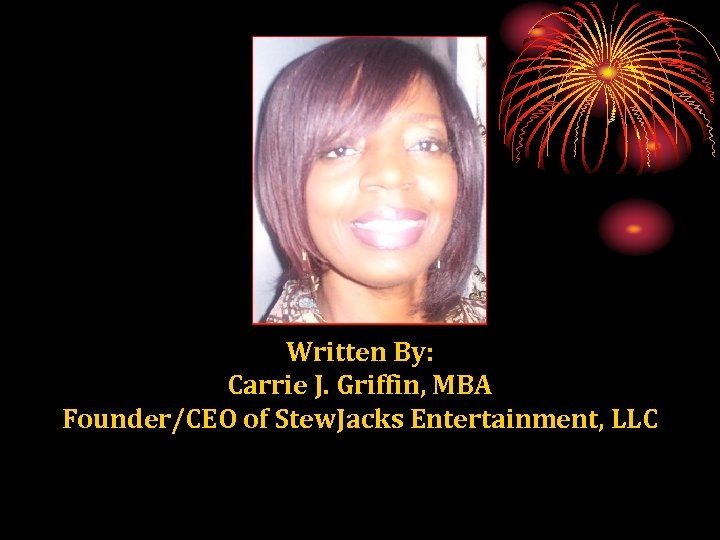 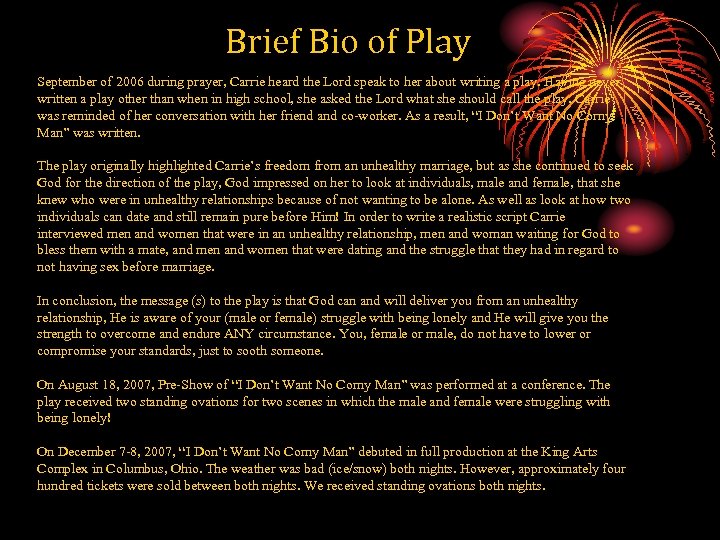 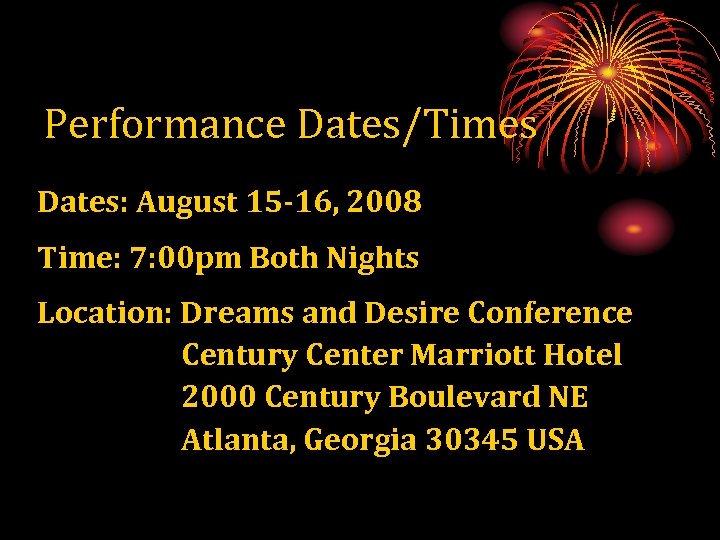 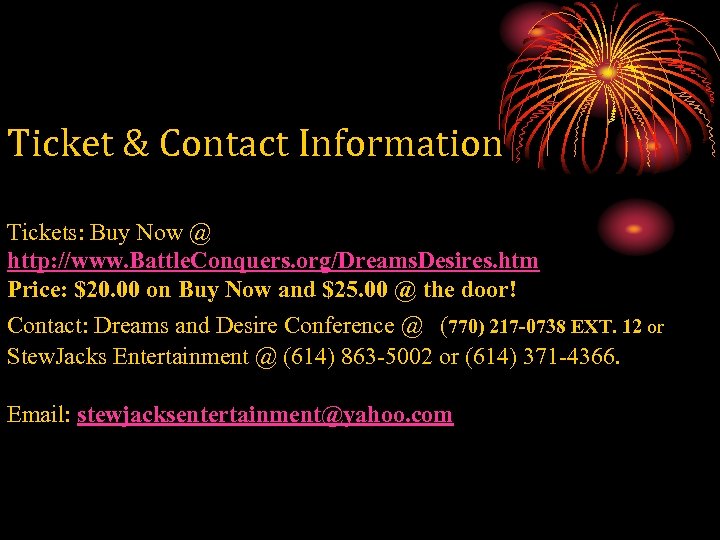 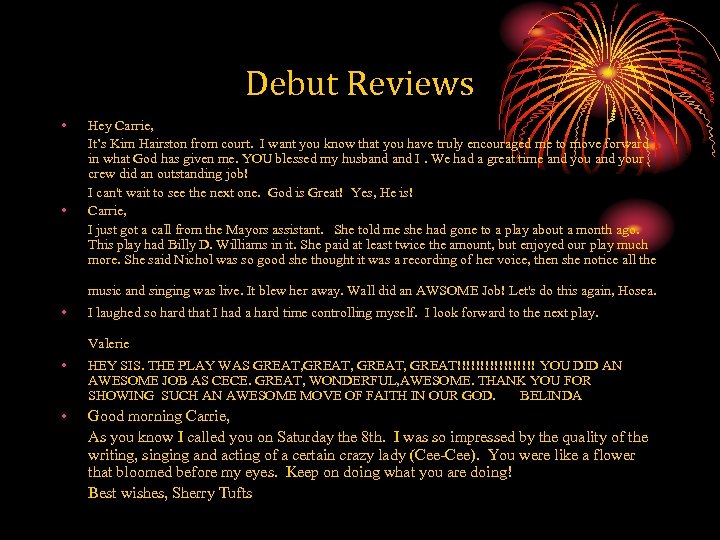 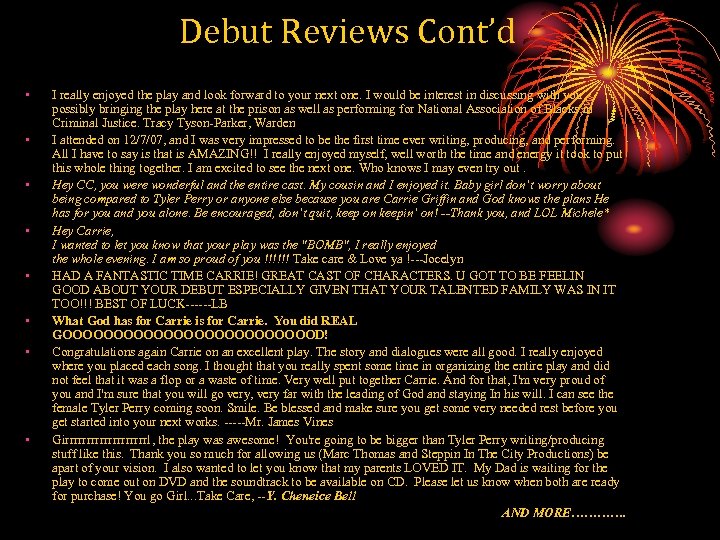 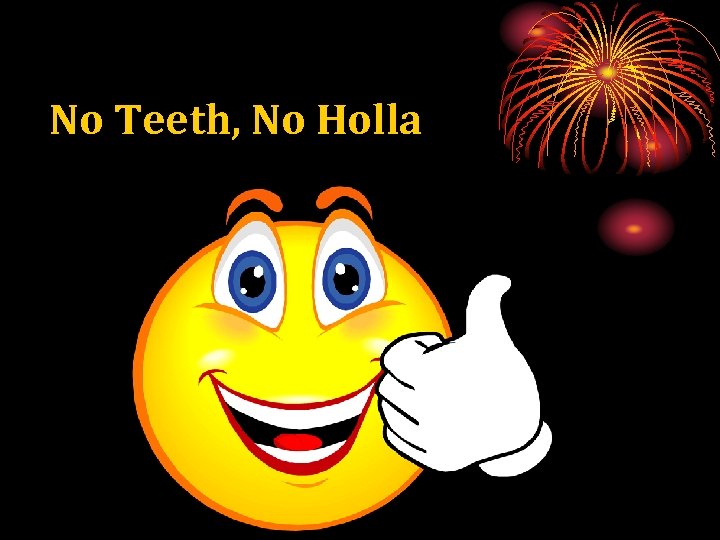 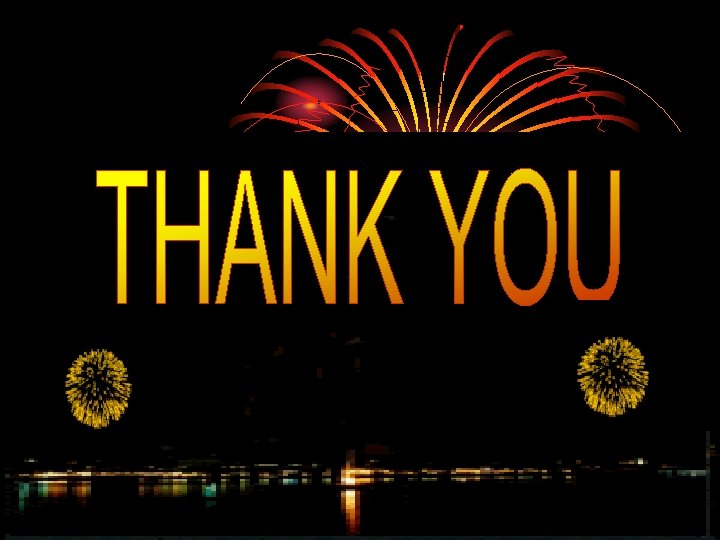 “I Don’t Want No Corny Man” A Gospel Comedy Drama

Brief Bio of Play September of 2006 during prayer, Carrie heard the Lord speak to her about writing a play. Having never written a play other than when in high school, she asked the Lord what she should call the play. Carrie was reminded of her conversation with her friend and co-worker. As a result, “I Don’t Want No Corny Man” was written. The play originally highlighted Carrie’s freedom from an unhealthy marriage, but as she continued to seek God for the direction of the play, God impressed on her to look at individuals, male and female, that she knew who were in unhealthy relationships because of not wanting to be alone. As well as look at how two individuals can date and still remain pure before Him! In order to write a realistic script Carrie interviewed men and women that were in an unhealthy relationship, men and woman waiting for God to bless them with a mate, and men and women that were dating and the struggle that they had in regard to not having sex before marriage. In conclusion, the message (s) to the play is that God can and will deliver you from an unhealthy relationship, He is aware of your (male or female) struggle with being lonely and He will give you the strength to overcome and endure ANY circumstance. You, female or male, do not have to lower or compromise your standards, just to sooth someone. On August 18, 2007, Pre-Show of “I Don’t Want No Corny Man” was performed at a conference. The play received two standing ovations for two scenes in which the male and female were struggling with being lonely! On December 7 -8, 2007, “I Don’t Want No Corny Man” debuted in full production at the King Arts Complex in Columbus, Ohio. The weather was bad (ice/snow) both nights. However, approximately four hundred tickets were sold between both nights. We received standing ovations both nights.

Debut Reviews • • Hey Carrie, It’s Kim Hairston from court. I want you know that you have truly encouraged me to move forward in what God has given me. YOU blessed my husband I. We had a great time and your crew did an outstanding job! I can't wait to see the next one. God is Great! Yes, He is! Carrie, I just got a call from the Mayors assistant. She told me she had gone to a play about a month ago. This play had Billy D. Williams in it. She paid at least twice the amount, but enjoyed our play much more. She said Nichol was so good she thought it was a recording of her voice, then she notice all the music and singing was live. It blew her away. Wall did an AWSOME Job! Let's do this again, Hosea. • I laughed so hard that I had a hard time controlling myself. I look forward to the next play. Valerie • HEY SIS. THE PLAY WAS GREAT, GREAT!!!!!!!!! YOU DID AN AWESOME JOB AS CECE. GREAT, WONDERFUL, AWESOME. THANK YOU FOR SHOWING SUCH AN AWESOME MOVE OF FAITH IN OUR GOD. BELINDA • Good morning Carrie, As you know I called you on Saturday the 8 th. I was so impressed by the quality of the writing, singing and acting of a certain crazy lady (Cee-Cee). You were like a flower that bloomed before my eyes. Keep on doing what you are doing! Best wishes, Sherry Tufts

Debut Reviews Cont’d • • I really enjoyed the play and look forward to your next one. I would be interest in discussing with you possibly bringing the play here at the prison as well as performing for National Association of Blacks in Criminal Justice. Tracy Tyson-Parker, Warden I attended on 12/7/07, and I was very impressed to be the first time ever writing, producing, and performing. All I have to say is that is AMAZING!! I really enjoyed myself, well worth the time and energy it took to put this whole thing together. I am excited to see the next one. Who knows I may even try out. Hey CC, you were wonderful and the entire cast. My cousin and I enjoyed it. Baby girl don’t worry about being compared to Tyler Perry or anyone else because you are Carrie Griffin and God knows the plans He has for you and you alone. Be encouraged, don’t quit, keep on keepin’ on! --Thank you, and LOL Michele* Hey Carrie, I wanted to let you know that your play was the "BOMB", I really enjoyed the whole evening. I am so proud of you !!!!!! Take care & Love ya !---Jocelyn HAD A FANTASTIC TIME CARRIE! GREAT CAST OF CHARACTERS. U GOT TO BE FEELIN GOOD ABOUT YOUR DEBUT ESPECIALLY GIVEN THAT YOUR TALENTED FAMILY WAS IN IT TOO!!! BEST OF LUCK------LB What God has for Carrie is for Carrie. You did REAL GOOOOOOOOOOOOOD! Congratulations again Carrie on an excellent play. The story and dialogues were all good. I really enjoyed where you placed each song. I thought that you really spent some time in organizing the entire play and did not feel that it was a flop or a waste of time. Very well put together Carrie. And for that, I'm very proud of you and I'm sure that you will go very, very far with the leading of God and staying In his will. I can see the female Tyler Perry coming soon. Smile. Be blessed and make sure you get some very needed rest before you get started into your next works. -----Mr. James Vines Girrrrrrrrrrl, the play was awesome! You're going to be bigger than Tyler Perry writing/producing stuff like this. Thank you so much for allowing us (Marc Thomas and Steppin In The City Productions) be apart of your vision. I also wanted to let you know that my parents LOVED IT. My Dad is waiting for the play to come out on DVD and the soundtrack to be available on CD. Please let us know when both are ready for purchase! You go Girl. . . Take Care, --Y. Cheneice Bell AND MORE………….

No Teeth, No Holla