I AM ROMA Romani CRISS Roma Center for 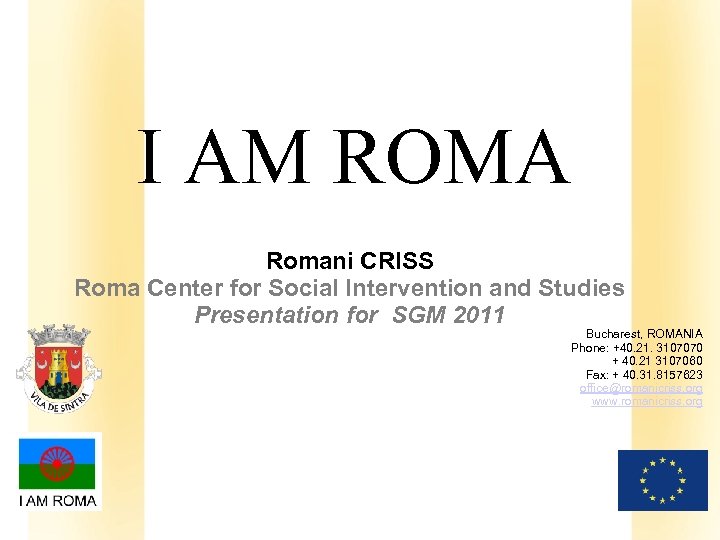 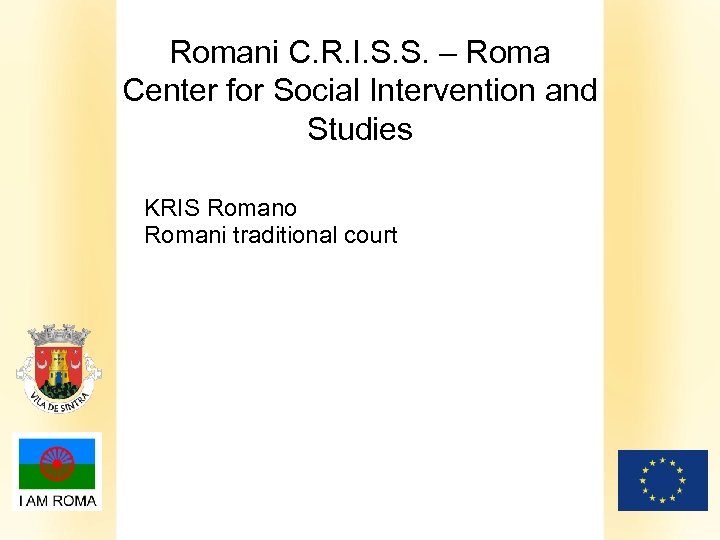 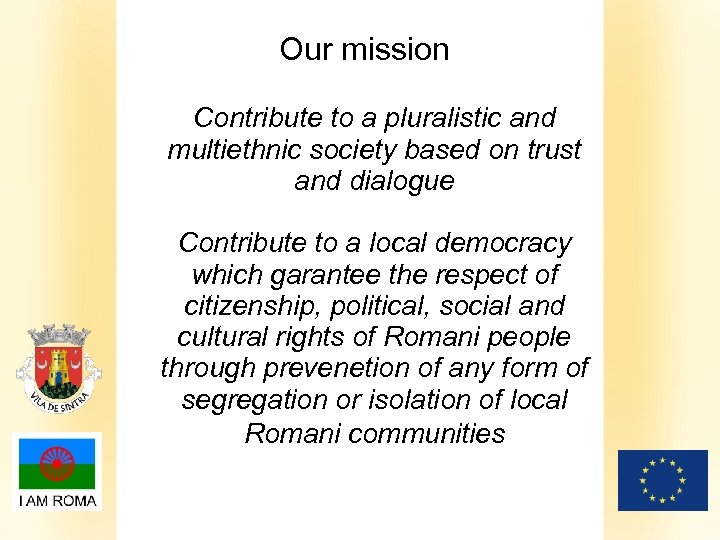 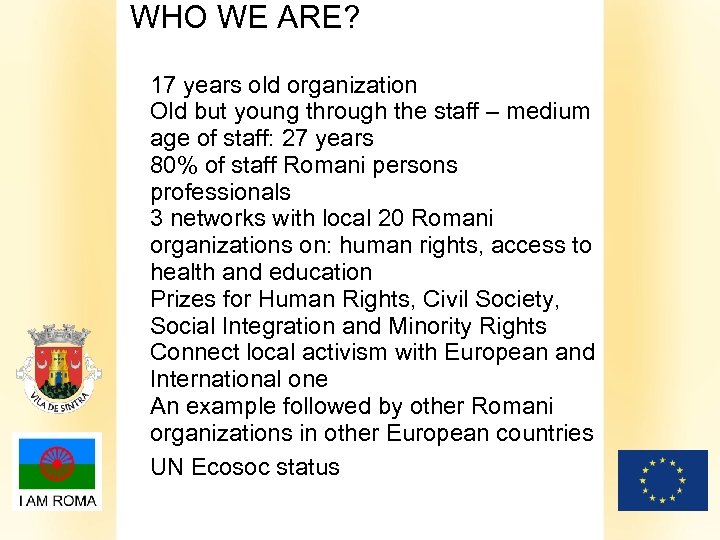 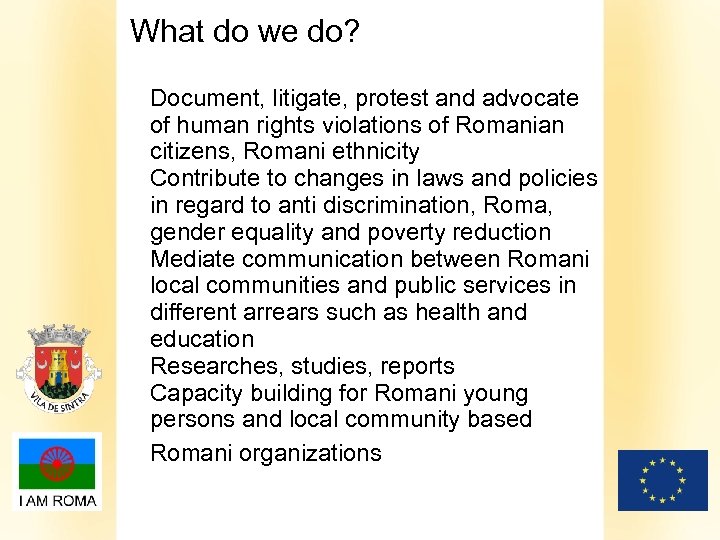 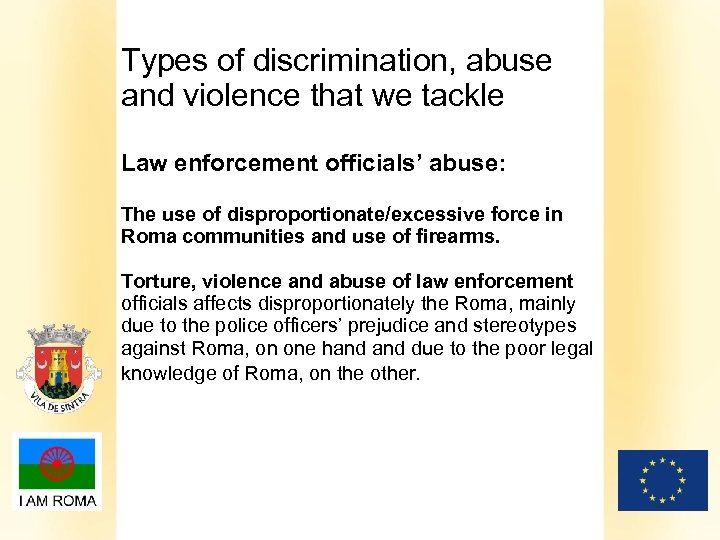 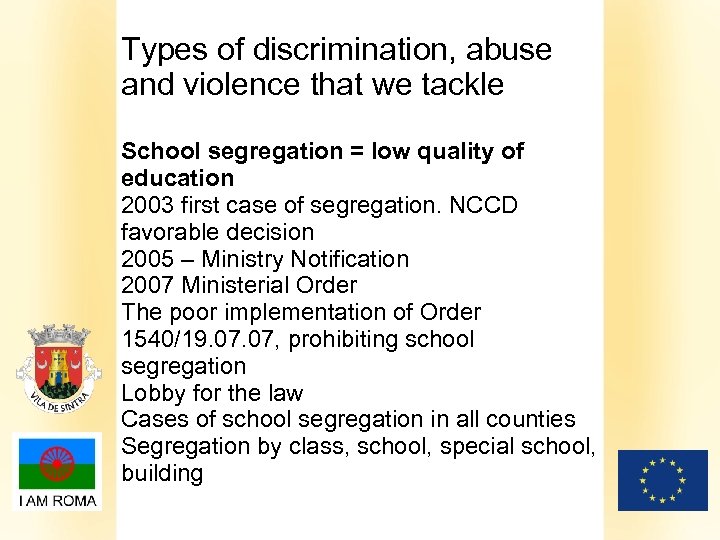 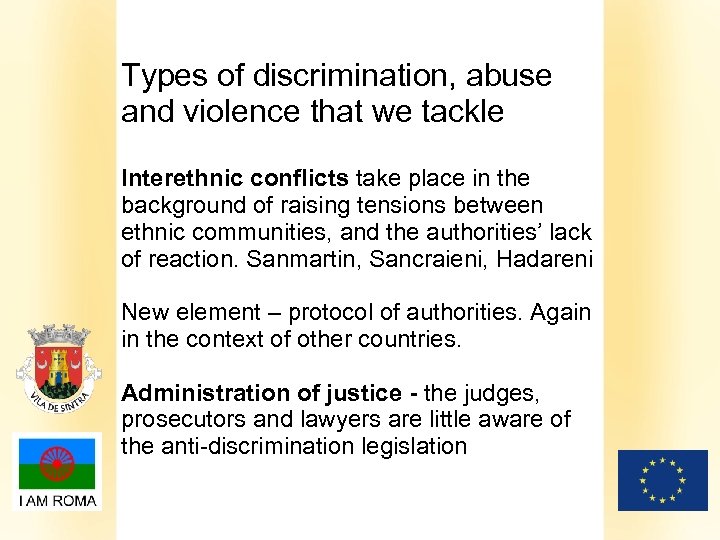 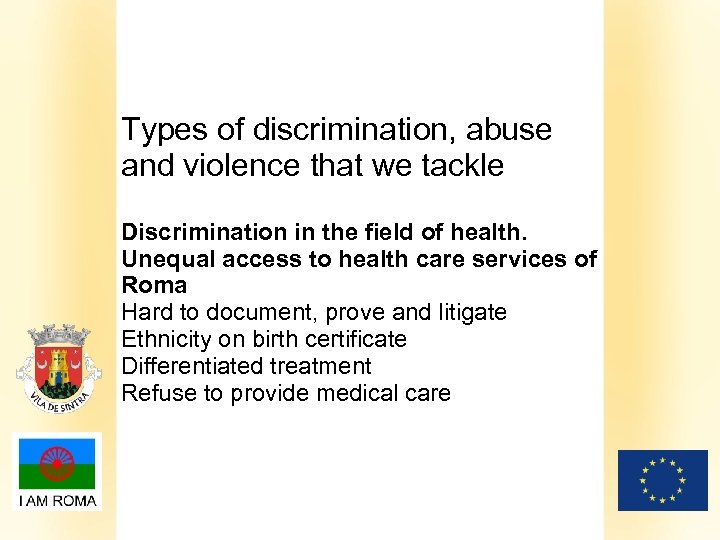 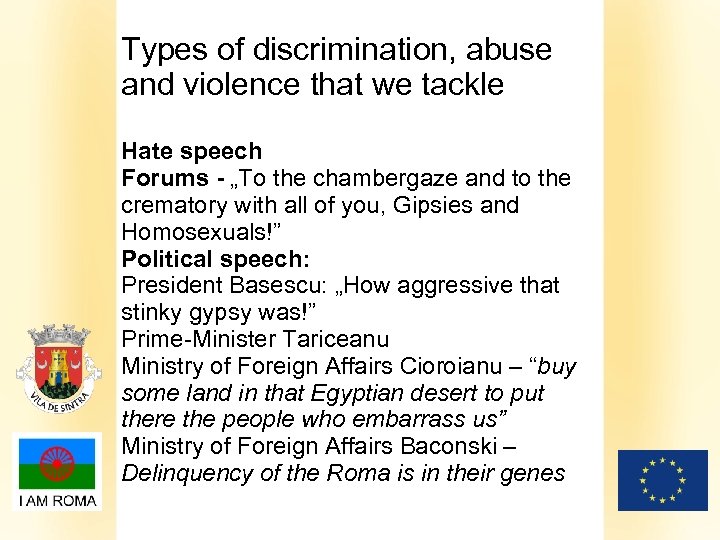 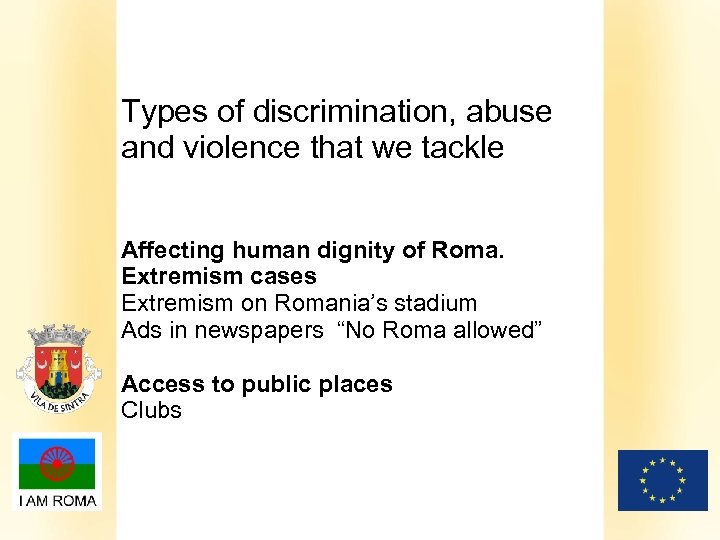 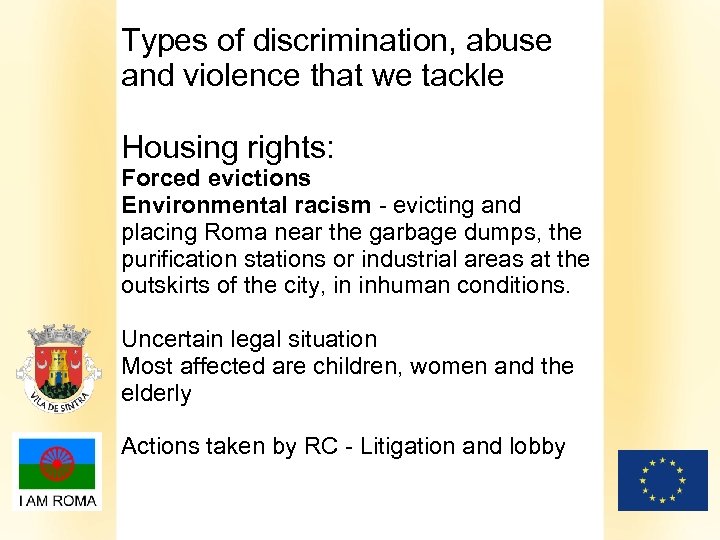 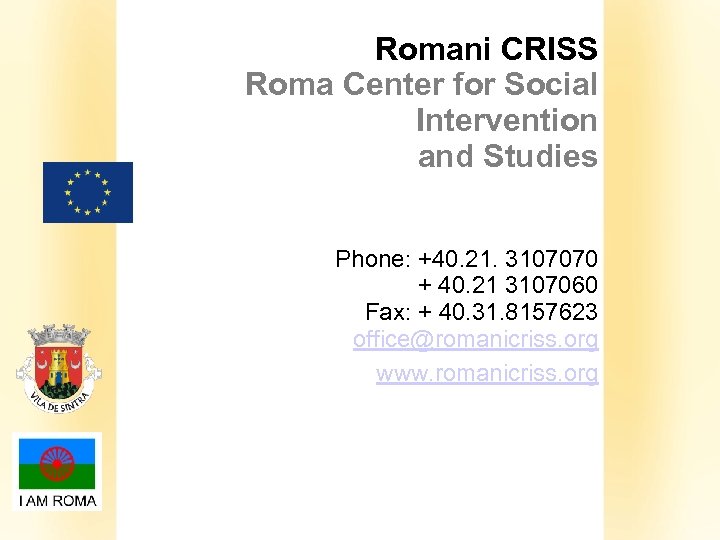 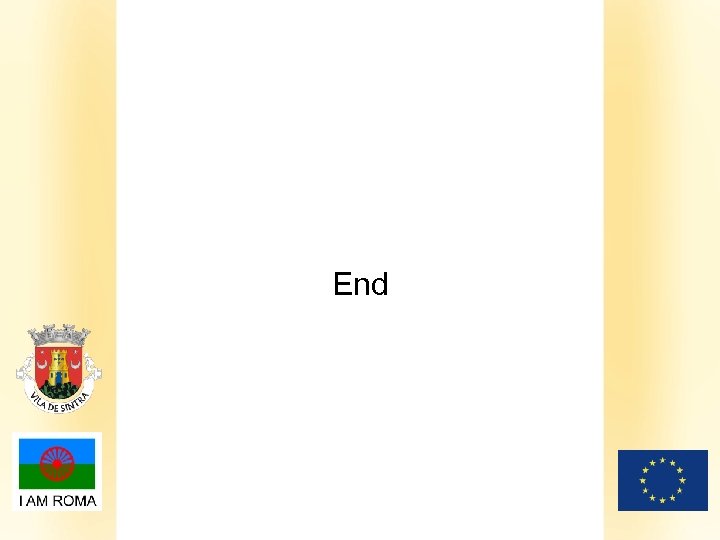 Скачать презентацию I AM ROMA Romani CRISS Roma Center for

Our mission Contribute to a pluralistic and multiethnic society based on trust and dialogue Contribute to a local democracy which garantee the respect of citizenship, political, social and cultural rights of Romani people through prevenetion of any form of segregation or isolation of local Romani communities

WHO WE ARE? 17 years old organization Old but young through the staff – medium age of staff: 27 years 80% of staff Romani persons professionals 3 networks with local 20 Romani organizations on: human rights, access to health and education Prizes for Human Rights, Civil Society, Social Integration and Minority Rights Connect local activism with European and International one An example followed by other Romani organizations in other European countries UN Ecosoc status

What do we do? Document, litigate, protest and advocate of human rights violations of Romanian citizens, Romani ethnicity Contribute to changes in laws and policies in regard to anti discrimination, Roma, gender equality and poverty reduction Mediate communication between Romani local communities and public services in different arrears such as health and education Researches, studies, reports Capacity building for Romani young persons and local community based Romani organizations

Types of discrimination, abuse and violence that we tackle Law enforcement officials’ abuse: The use of disproportionate/excessive force in Roma communities and use of firearms. Torture, violence and abuse of law enforcement officials affects disproportionately the Roma, mainly due to the police officers’ prejudice and stereotypes against Roma, on one hand due to the poor legal knowledge of Roma, on the other.

Types of discrimination, abuse and violence that we tackle Interethnic conflicts take place in the background of raising tensions between ethnic communities, and the authorities’ lack of reaction. Sanmartin, Sancraieni, Hadareni New element – protocol of authorities. Again in the context of other countries. Administration of justice - the judges, prosecutors and lawyers are little aware of the anti-discrimination legislation

Types of discrimination, abuse and violence that we tackle Discrimination in the field of health. Unequal access to health care services of Roma Hard to document, prove and litigate Ethnicity on birth certificate Differentiated treatment Refuse to provide medical care

Types of discrimination, abuse and violence that we tackle Hate speech Forums - „To the chambergaze and to the crematory with all of you, Gipsies and Homosexuals!” Political speech: President Basescu: „How aggressive that stinky gypsy was!” Prime-Minister Tariceanu Ministry of Foreign Affairs Cioroianu – “buy some land in that Egyptian desert to put there the people who embarrass us” Ministry of Foreign Affairs Baconski – Delinquency of the Roma is in their genes

Types of discrimination, abuse and violence that we tackle Housing rights: Forced evictions Environmental racism - evicting and placing Roma near the garbage dumps, the purification stations or industrial areas at the outskirts of the city, in inhuman conditions. Uncertain legal situation Most affected are children, women and the elderly Actions taken by RC - Litigation and lobby