Hyperbole Definition An extreme exaggeration that the 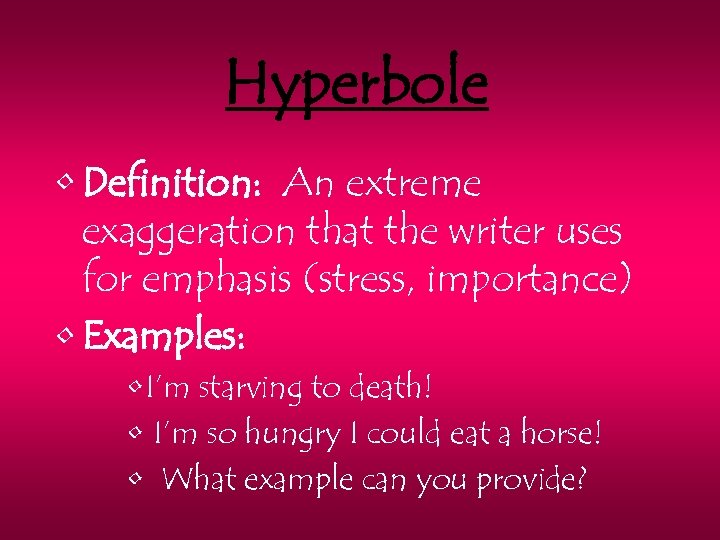 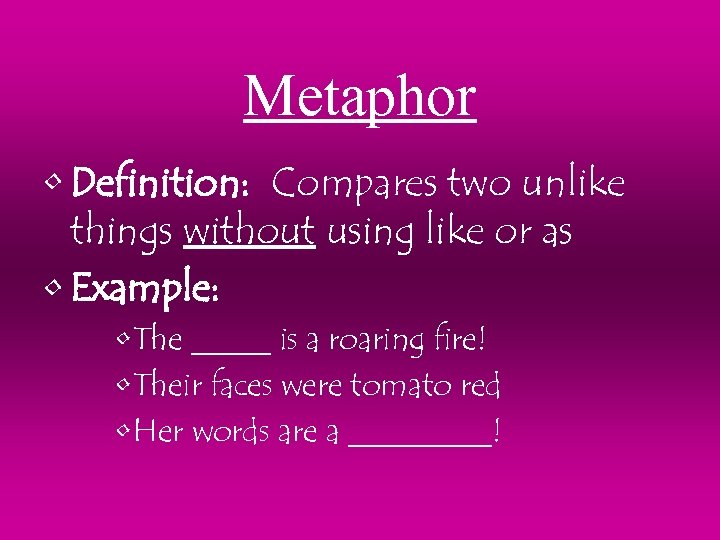 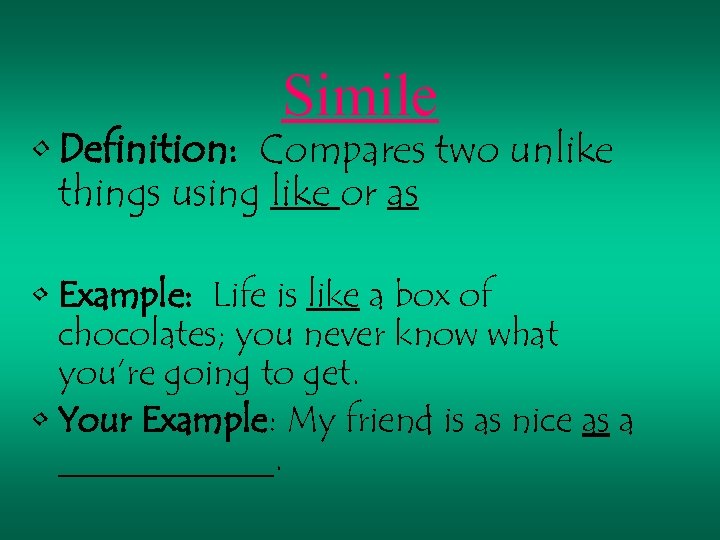 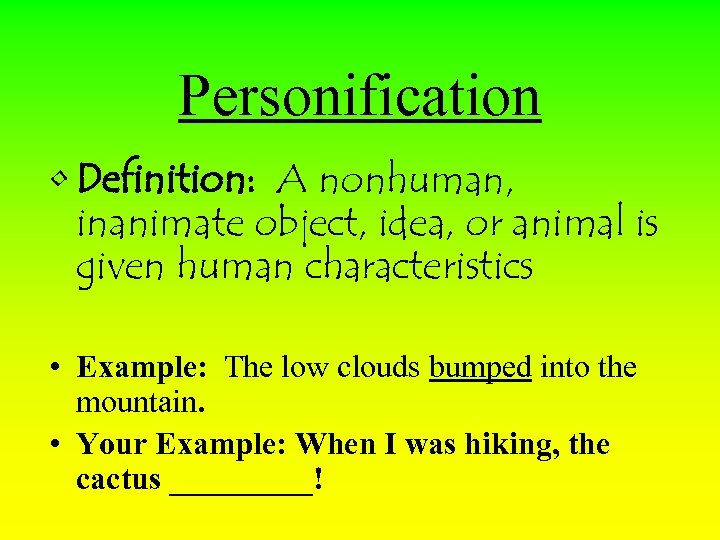 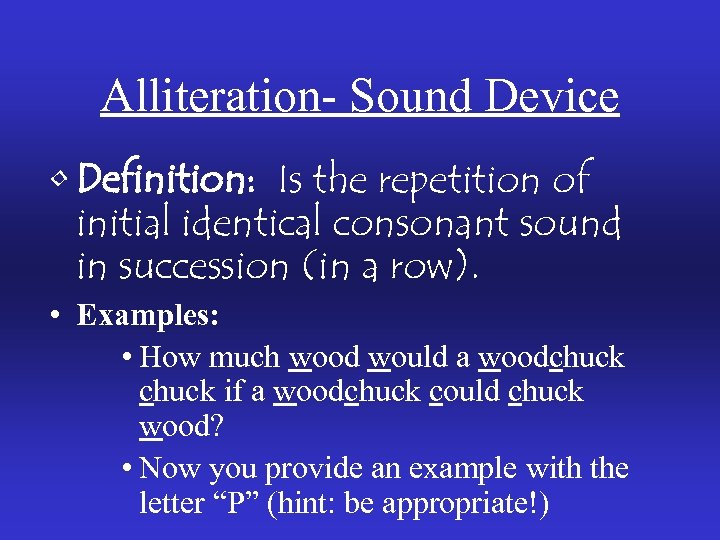 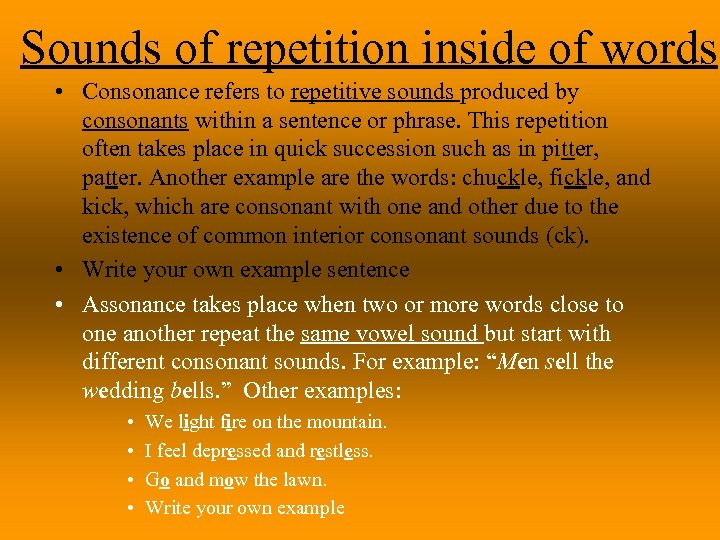 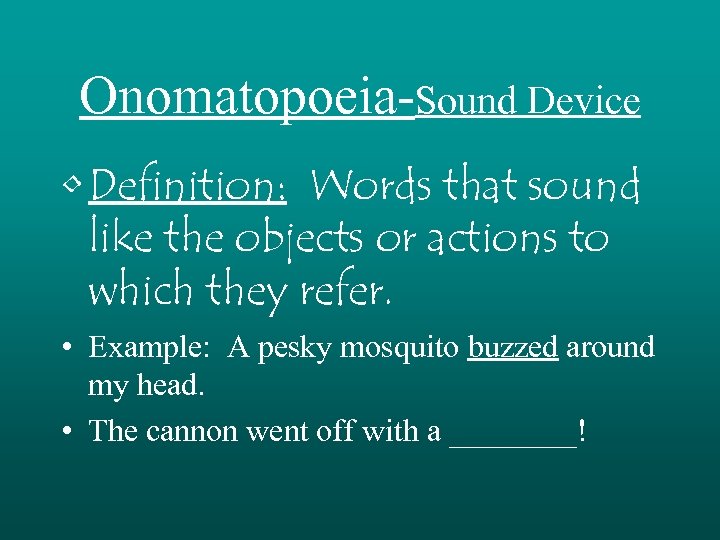 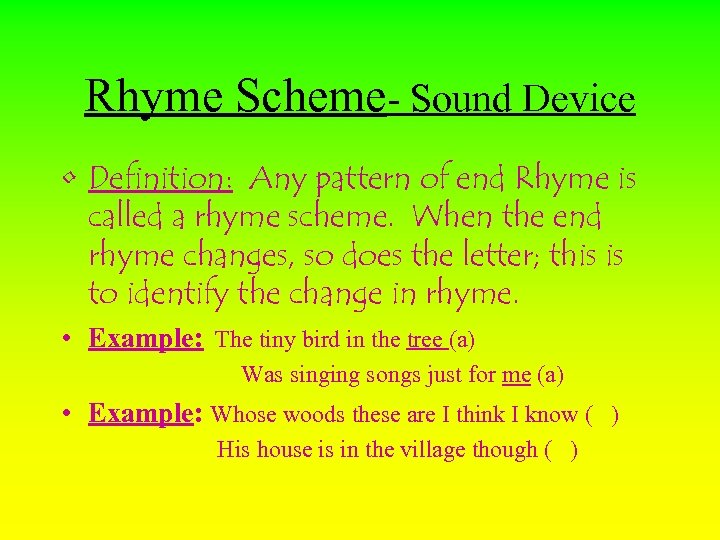 Скачать презентацию Hyperbole Definition An extreme exaggeration that the

Hyperbole • Definition: An extreme exaggeration that the writer uses for emphasis (stress, importance) • Examples: • I’m starving to death! • I’m so hungry I could eat a horse! • What example can you provide?

Metaphor • Definition: Compares two unlike things without using like or as • Example: • The _____ is a roaring fire! • Their faces were tomato red • Her words are a _____!

Simile • Definition: Compares two unlike things using like or as • Example: Life is like a box of chocolates; you never know what you’re going to get. • Your Example: My friend is as nice as a ______.

Personification • Definition: A nonhuman, inanimate object, idea, or animal is given human characteristics • Example: The low clouds bumped into the mountain. • Your Example: When I was hiking, the cactus _____!

Alliteration- Sound Device • Definition: Is the repetition of initial identical consonant sound in succession (in a row). • Examples: • How much wood would a woodchuck if a woodchuck could chuck wood? • Now you provide an example with the letter “P” (hint: be appropriate!)

Sounds of repetition inside of words • Consonance refers to repetitive sounds produced by consonants within a sentence or phrase. This repetition often takes place in quick succession such as in pitter, patter. Another example are the words: chuckle, fickle, and kick, which are consonant with one and other due to the existence of common interior consonant sounds (ck). • Write your own example sentence • Assonance takes place when two or more words close to one another repeat the same vowel sound but start with different consonant sounds. For example: “Men sell the wedding bells. ” Other examples: • • We light fire on the mountain. I feel depressed and restless. Go and mow the lawn. Write your own example

Onomatopoeia-Sound Device • Definition: Words that sound like the objects or actions to which they refer. • Example: A pesky mosquito buzzed around my head. • The cannon went off with a ____!

Rhyme Scheme- Sound Device • Definition: Any pattern of end Rhyme is called a rhyme scheme. When the end rhyme changes, so does the letter; this is to identify the change in rhyme. • Example: The tiny bird in the tree (a) Was singing songs just for me (a) • Example: Whose woods these are I think I know ( ) His house is in the village though ( )