Human Guinea Pig Patience of Job Award For Being 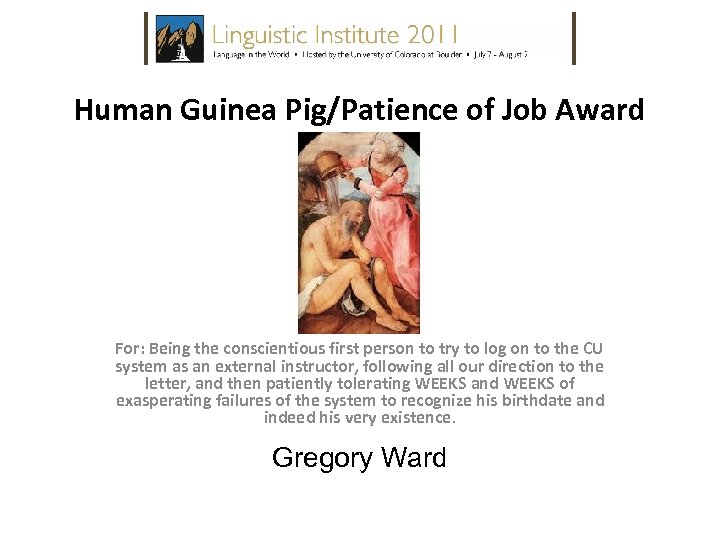 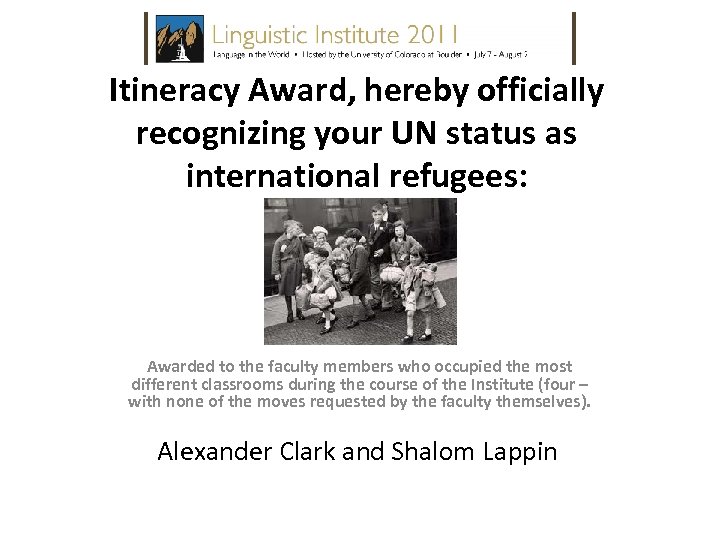 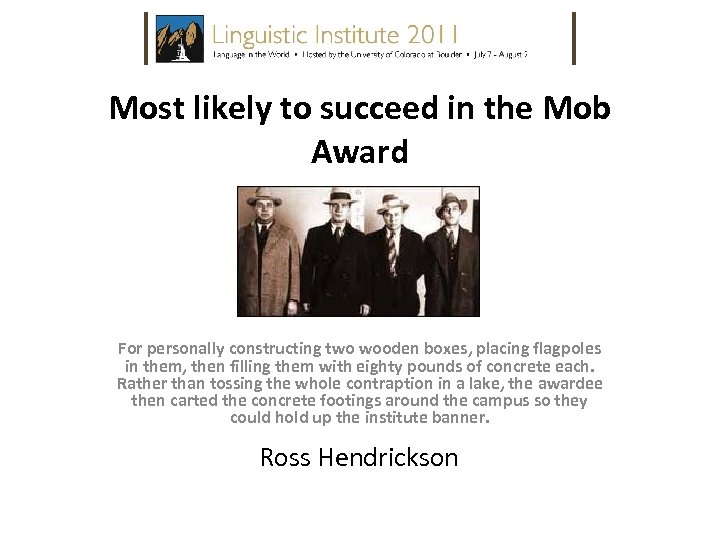 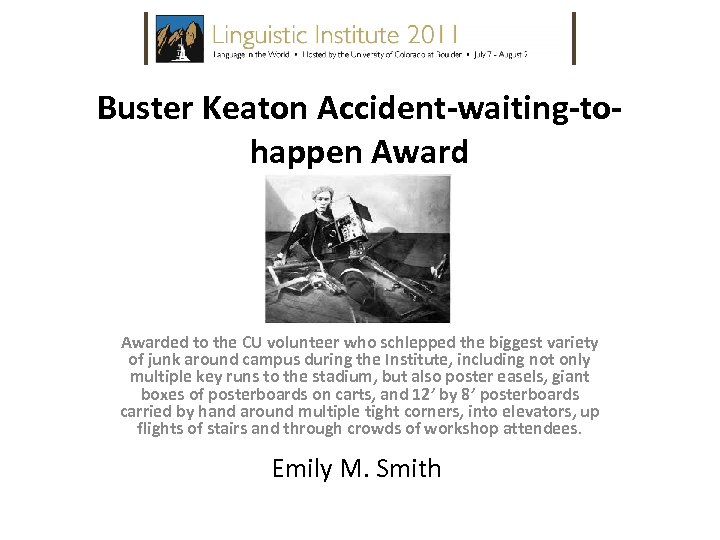 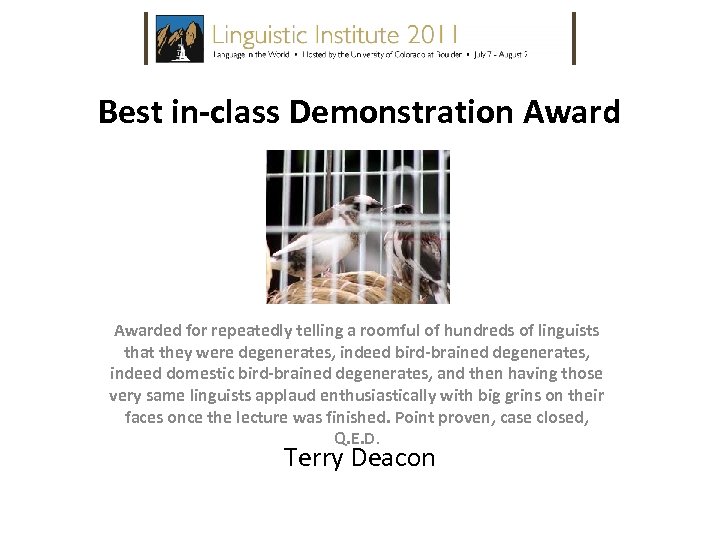 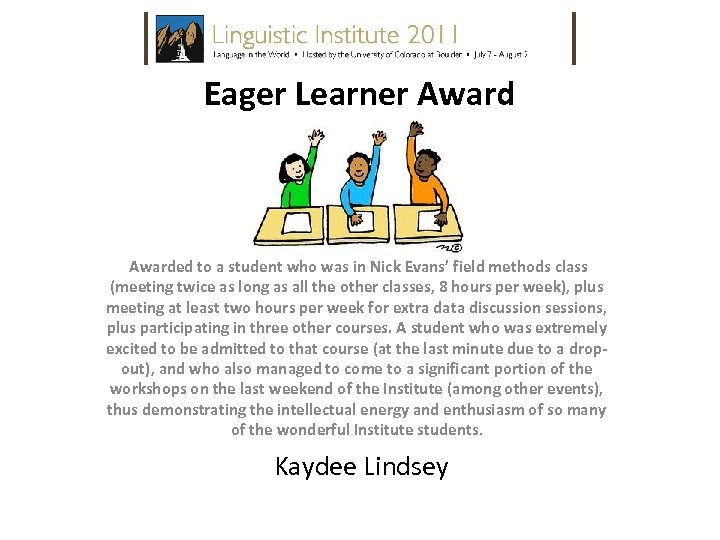 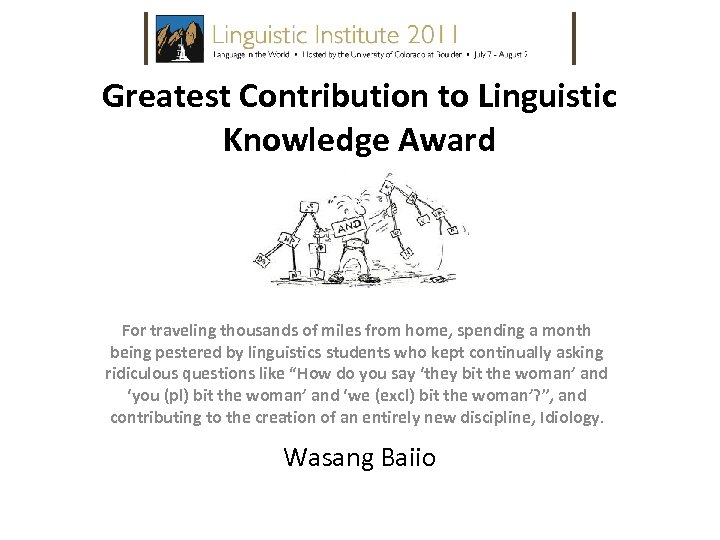 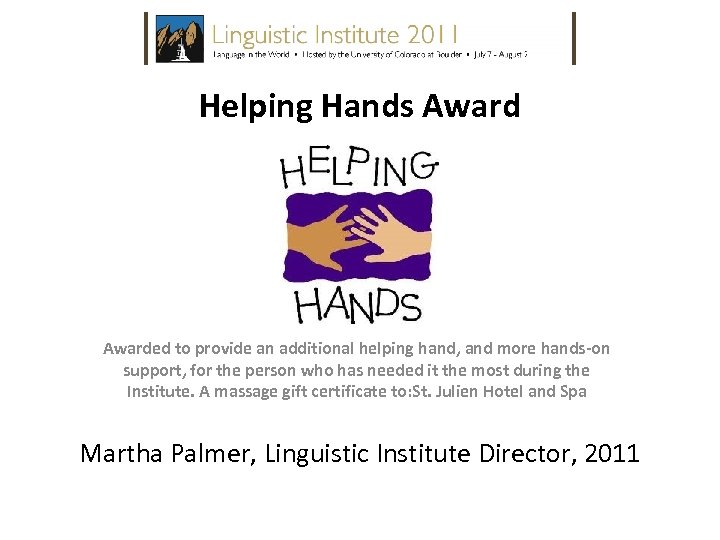 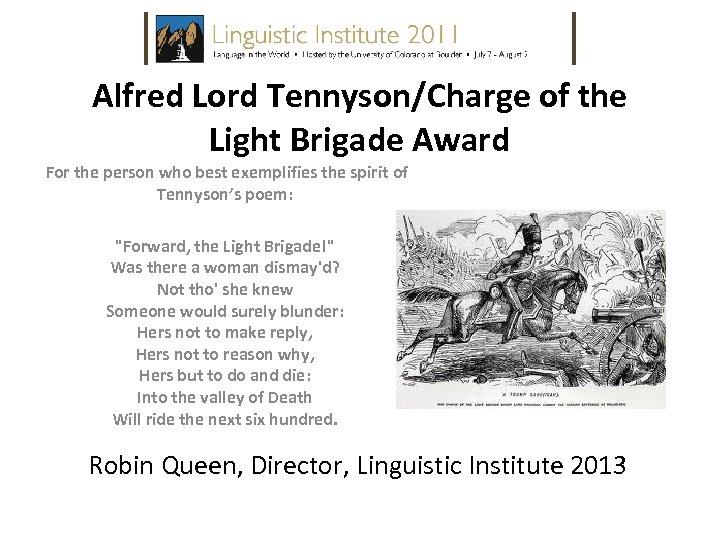 Human Guinea Pig/Patience of Job Award For: Being the conscientious first person to try to log on to the CU system as an external instructor, following all our direction to the letter, and then patiently tolerating WEEKS and WEEKS of exasperating failures of the system to recognize his birthdate and indeed his very existence. Gregory Ward

Itineracy Award, hereby officially recognizing your UN status as international refugees: Awarded to the faculty members who occupied the most different classrooms during the course of the Institute (four – with none of the moves requested by the faculty themselves). Alexander Clark and Shalom Lappin

Most likely to succeed in the Mob Award For personally constructing two wooden boxes, placing flagpoles in them, then filling them with eighty pounds of concrete each. Rather than tossing the whole contraption in a lake, the awardee then carted the concrete footings around the campus so they could hold up the institute banner. Ross Hendrickson

Buster Keaton Accident-waiting-tohappen Awarded to the CU volunteer who schlepped the biggest variety of junk around campus during the Institute, including not only multiple key runs to the stadium, but also poster easels, giant boxes of posterboards on carts, and 12’ by 8’ posterboards carried by hand around multiple tight corners, into elevators, up flights of stairs and through crowds of workshop attendees. Emily M. Smith

Eager Learner Awarded to a student who was in Nick Evans’ field methods class (meeting twice as long as all the other classes, 8 hours per week), plus meeting at least two hours per week for extra data discussion sessions, plus participating in three other courses. A student who was extremely excited to be admitted to that course (at the last minute due to a dropout), and who also managed to come to a significant portion of the workshops on the last weekend of the Institute (among other events), thus demonstrating the intellectual energy and enthusiasm of so many of the wonderful Institute students. Kaydee Lindsey

Greatest Contribution to Linguistic Knowledge Award For traveling thousands of miles from home, spending a month being pestered by linguistics students who kept continually asking ridiculous questions like “How do you say ‘they bit the woman’ and ‘you (pl) bit the woman’ and ‘we (excl) bit the woman’? ”, and contributing to the creation of an entirely new discipline, Idiology. Wasang Baiio

Helping Hands Awarded to provide an additional helping hand, and more hands-on support, for the person who has needed it the most during the Institute. A massage gift certificate to: St. Julien Hotel and Spa Martha Palmer, Linguistic Institute Director, 2011

Alfred Lord Tennyson/Charge of the Light Brigade Award For the person who best exemplifies the spirit of Tennyson’s poem: "Forward, the Light Brigade!" Was there a woman dismay'd? Not tho' she knew Someone would surely blunder: Hers not to make reply, Hers not to reason why, Hers but to do and die: Into the valley of Death Will ride the next six hundred. Robin Queen, Director, Linguistic Institute 2013