How We ve Been Impacted How We re Coping Gregory 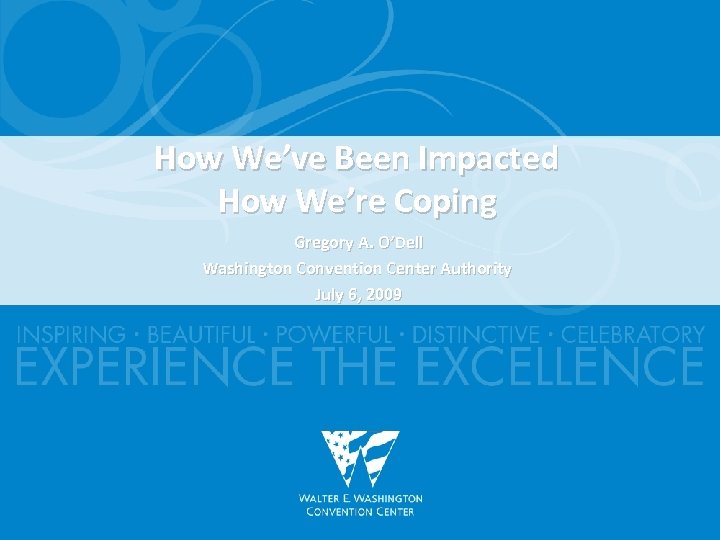 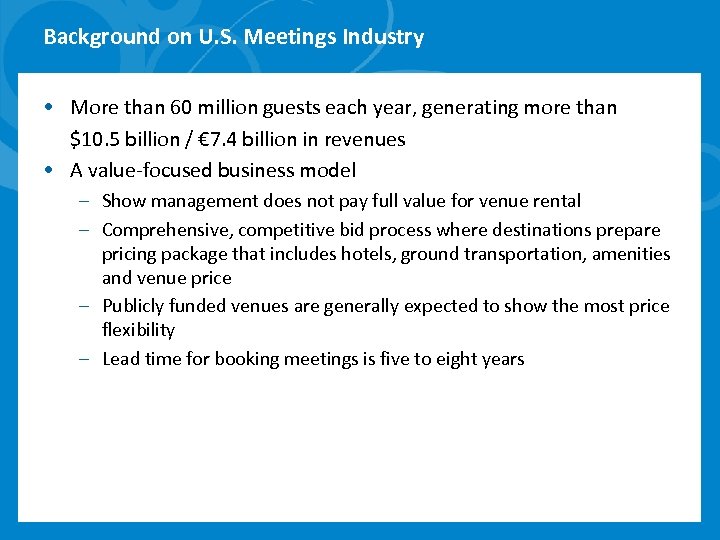 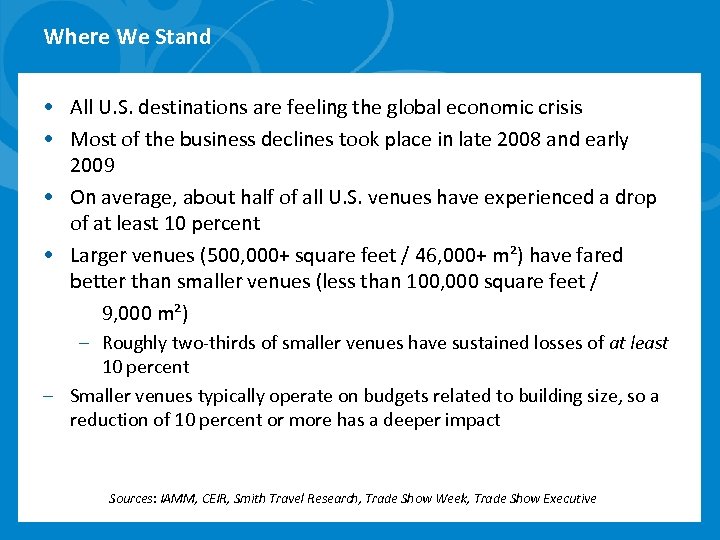 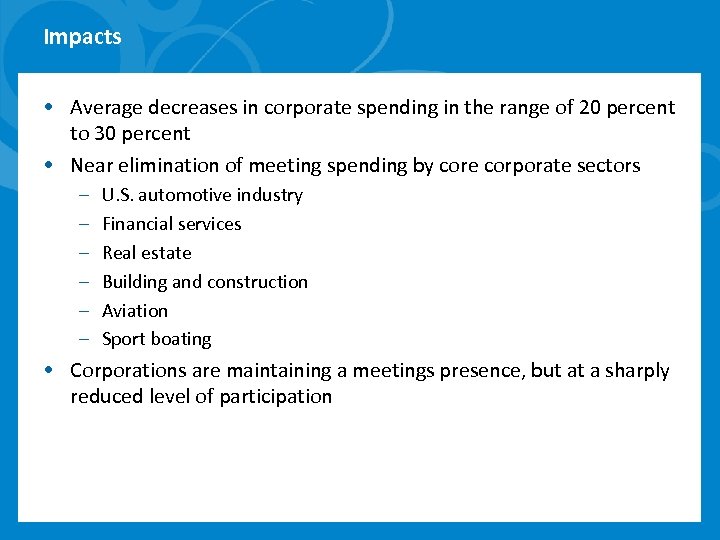 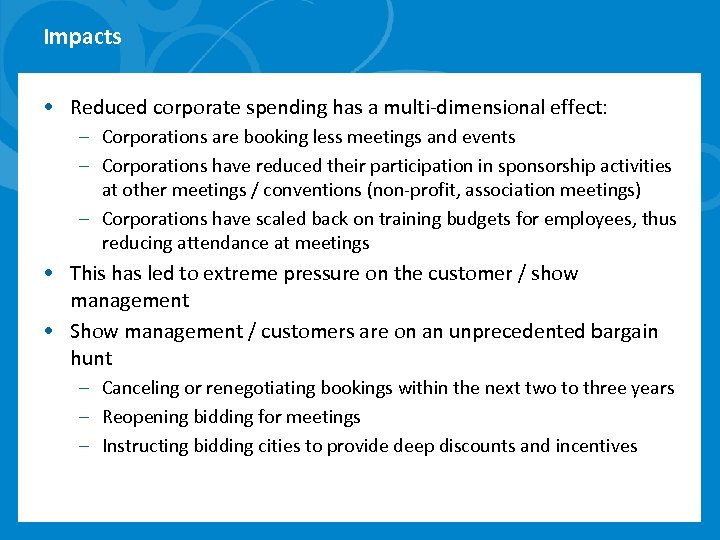 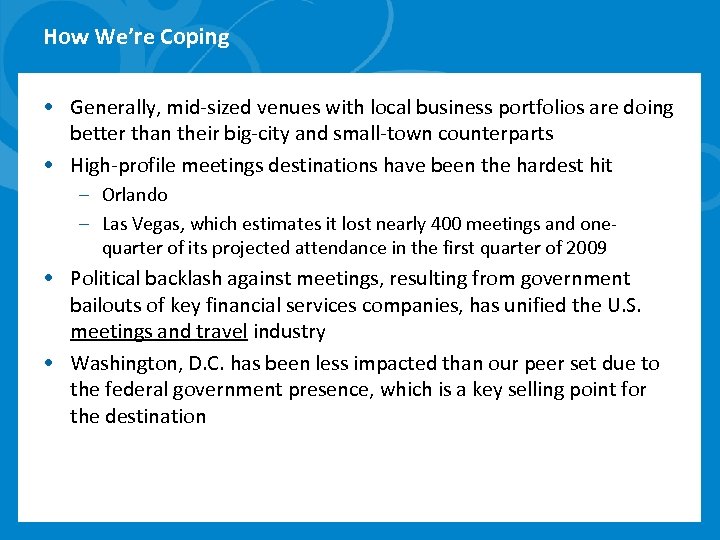 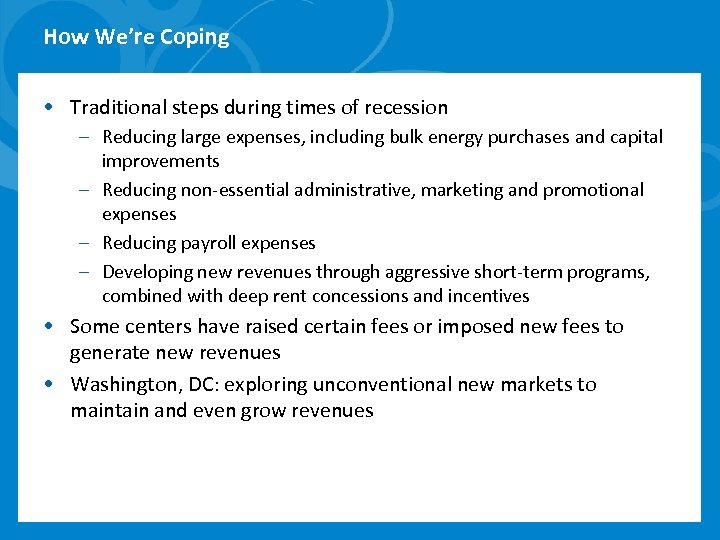 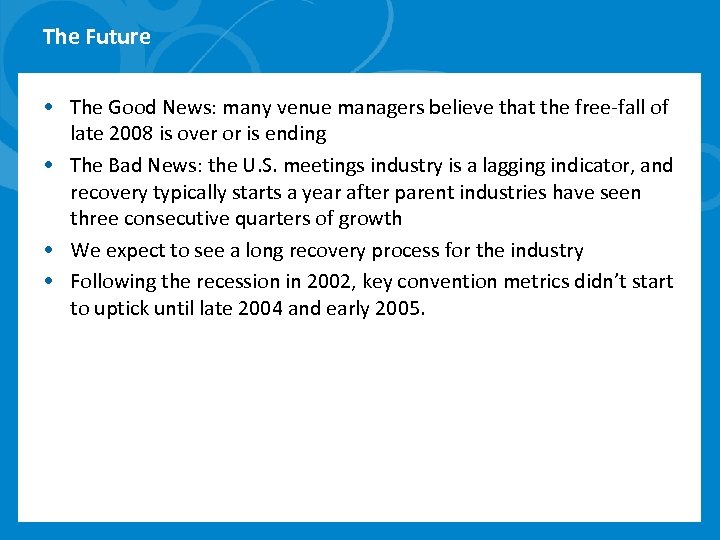 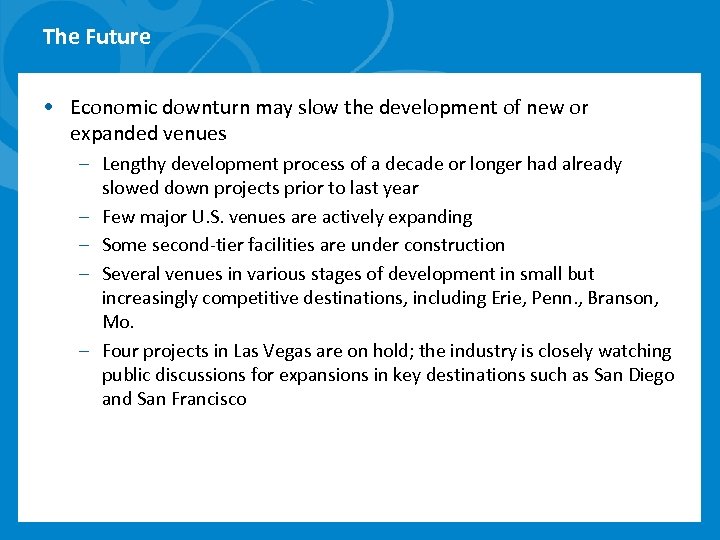 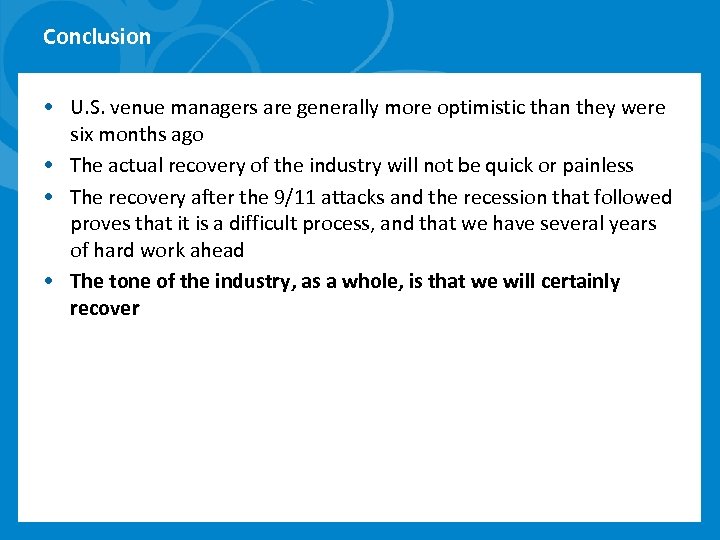 Where We Stand • All U. S. destinations are feeling the global economic crisis • Most of the business declines took place in late 2008 and early 2009 • On average, about half of all U. S. venues have experienced a drop of at least 10 percent • Larger venues (500, 000+ square feet / 46, 000+ m²) have fared better than smaller venues (less than 100, 000 square feet / 9, 000 m²) – Roughly two-thirds of smaller venues have sustained losses of at least 10 percent – Smaller venues typically operate on budgets related to building size, so a reduction of 10 percent or more has a deeper impact Sources: IAMM, CEIR, Smith Travel Research, Trade Show Week, Trade Show Executive

Impacts • Average decreases in corporate spending in the range of 20 percent to 30 percent • Near elimination of meeting spending by core corporate sectors – – – U. S. automotive industry Financial services Real estate Building and construction Aviation Sport boating • Corporations are maintaining a meetings presence, but at a sharply reduced level of participation

Impacts • Reduced corporate spending has a multi-dimensional effect: – Corporations are booking less meetings and events – Corporations have reduced their participation in sponsorship activities at other meetings / conventions (non-profit, association meetings) – Corporations have scaled back on training budgets for employees, thus reducing attendance at meetings • This has led to extreme pressure on the customer / show management • Show management / customers are on an unprecedented bargain hunt – Canceling or renegotiating bookings within the next two to three years – Reopening bidding for meetings – Instructing bidding cities to provide deep discounts and incentives

How We’re Coping • Generally, mid-sized venues with local business portfolios are doing better than their big-city and small-town counterparts • High-profile meetings destinations have been the hardest hit – Orlando – Las Vegas, which estimates it lost nearly 400 meetings and onequarter of its projected attendance in the first quarter of 2009 • Political backlash against meetings, resulting from government bailouts of key financial services companies, has unified the U. S. meetings and travel industry • Washington, D. C. has been less impacted than our peer set due to the federal government presence, which is a key selling point for the destination

The Future • The Good News: many venue managers believe that the free-fall of late 2008 is over or is ending • The Bad News: the U. S. meetings industry is a lagging indicator, and recovery typically starts a year after parent industries have seen three consecutive quarters of growth • We expect to see a long recovery process for the industry • Following the recession in 2002, key convention metrics didn’t start to uptick until late 2004 and early 2005.

The Future • Economic downturn may slow the development of new or expanded venues – Lengthy development process of a decade or longer had already slowed down projects prior to last year – Few major U. S. venues are actively expanding – Some second-tier facilities are under construction – Several venues in various stages of development in small but increasingly competitive destinations, including Erie, Penn. , Branson, Mo. – Four projects in Las Vegas are on hold; the industry is closely watching public discussions for expansions in key destinations such as San Diego and San Francisco

Conclusion • U. S. venue managers are generally more optimistic than they were six months ago • The actual recovery of the industry will not be quick or painless • The recovery after the 9/11 attacks and the recession that followed proves that it is a difficult process, and that we have several years of hard work ahead • The tone of the industry, as a whole, is that we will certainly recover

topic slide Once a man was waiting