How much harder would it be to communicate 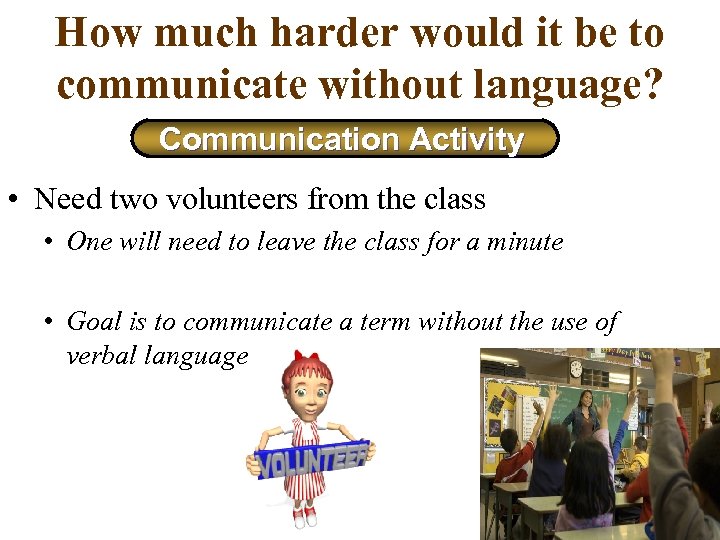 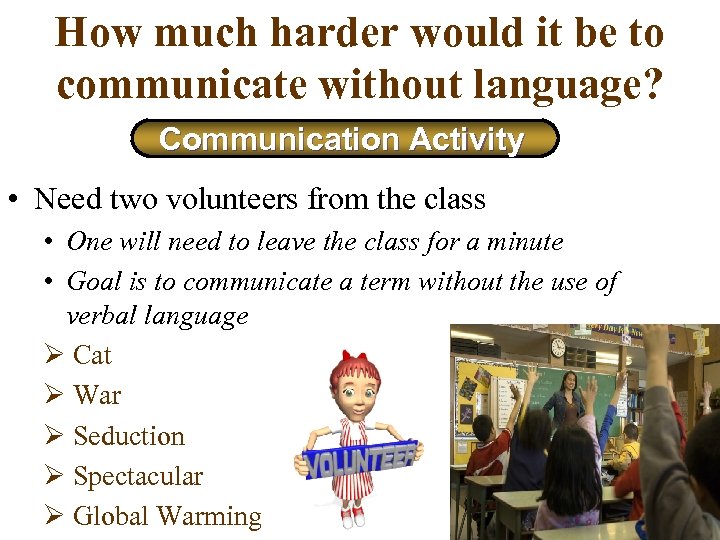 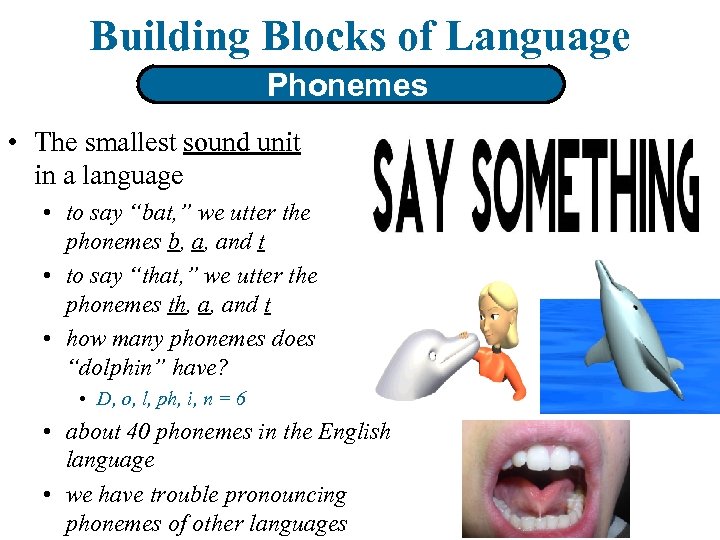 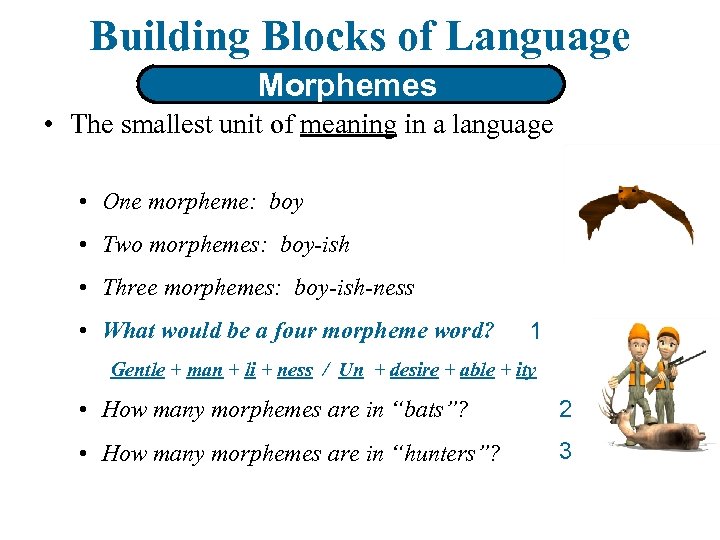 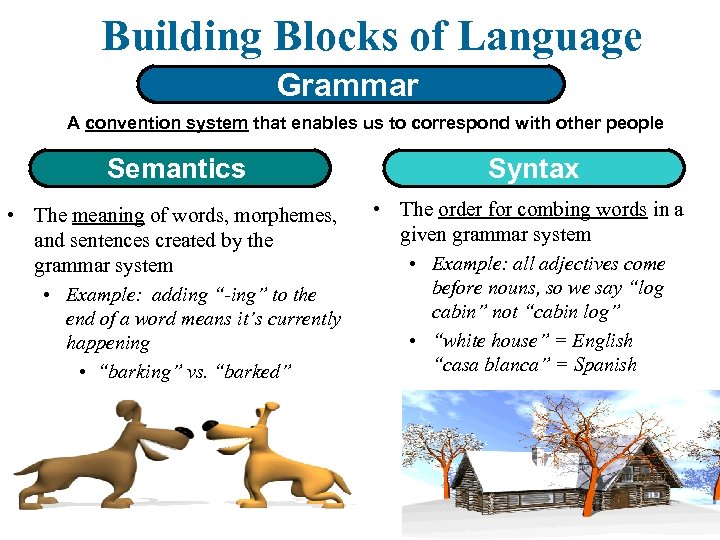 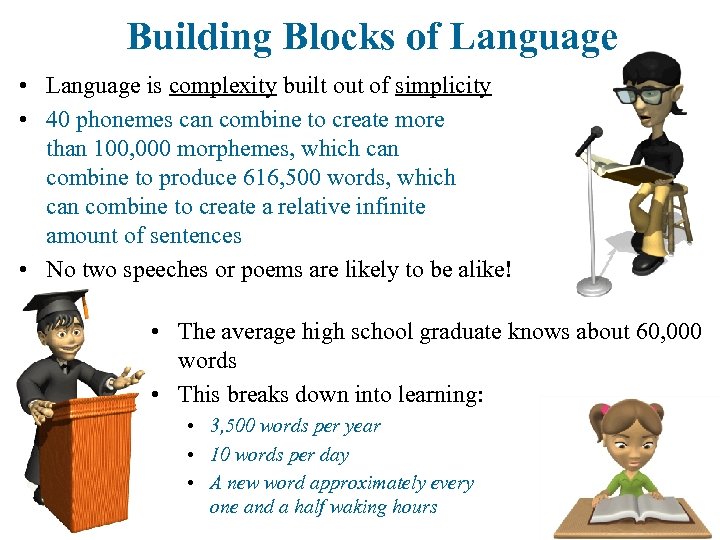 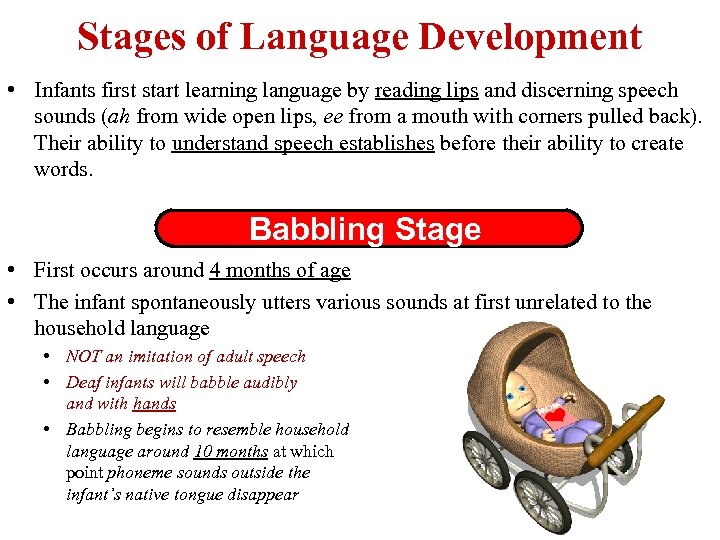 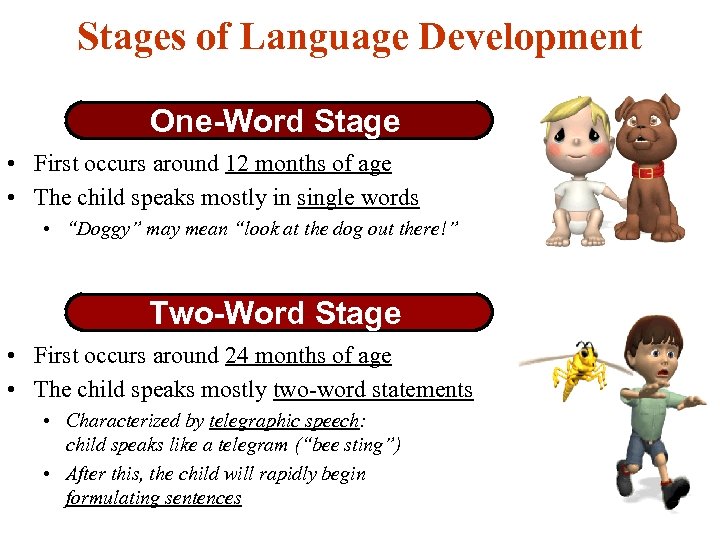 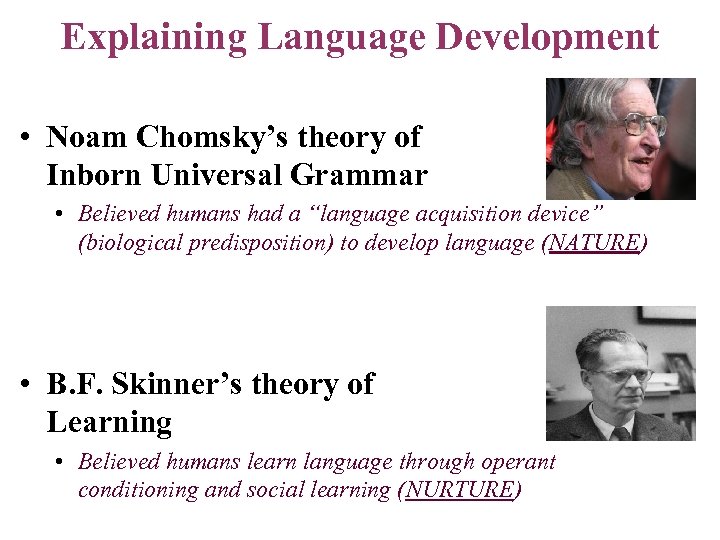 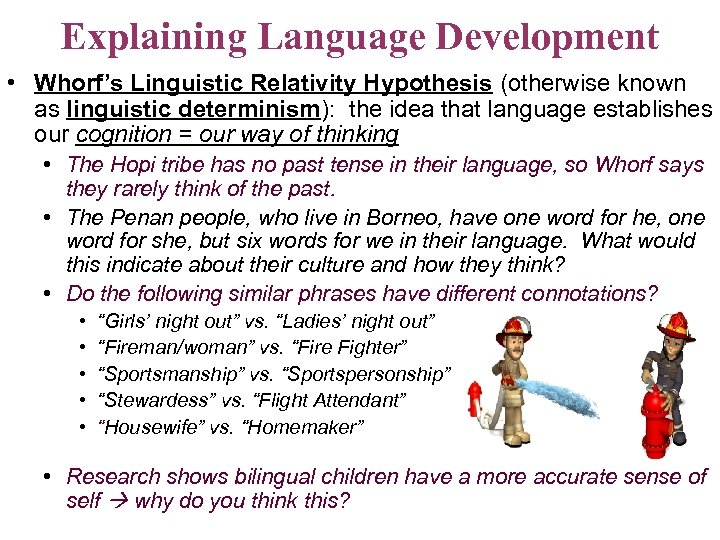 Скачать презентацию How much harder would it be to communicate

How much harder would it be to communicate without language? Communication Activity • Need two volunteers from the class • One will need to leave the class for a minute • Goal is to communicate a term without the use of verbal language

How much harder would it be to communicate without language? Communication Activity • Need two volunteers from the class • One will need to leave the class for a minute • Goal is to communicate a term without the use of verbal language Ø Cat Ø War Ø Seduction Ø Spectacular Ø Global Warming

Building Blocks of Language Grammar A convention system that enables us to correspond with other people Semantics Syntax • The meaning of words, morphemes, and sentences created by the grammar system • Example: adding “-ing” to the • The order for combing words in a given grammar system • Example: all adjectives come end of a word means it’s currently happening • “barking” vs. “barked” before nouns, so we say “log cabin” not “cabin log” • “white house” = English “casa blanca” = Spanish

Building Blocks of Language • Language is complexity built out of simplicity • 40 phonemes can combine to create more than 100, 000 morphemes, which can combine to produce 616, 500 words, which can combine to create a relative infinite amount of sentences • No two speeches or poems are likely to be alike! • The average high school graduate knows about 60, 000 words • This breaks down into learning: • 3, 500 words per year • 10 words per day • A new word approximately every one and a half waking hours

Stages of Language Development • Infants first start learning language by reading lips and discerning speech sounds (ah from wide open lips, ee from a mouth with corners pulled back). Their ability to understand speech establishes before their ability to create words. Babbling Stage • First occurs around 4 months of age • The infant spontaneously utters various sounds at first unrelated to the household language • NOT an imitation of adult speech • Deaf infants will babble audibly and with hands • Babbling begins to resemble household language around 10 months at which point phoneme sounds outside the infant’s native tongue disappear

Explaining Language Development • Whorf’s Linguistic Relativity Hypothesis (otherwise known as linguistic determinism): the idea that language establishes our cognition = our way of thinking • The Hopi tribe has no past tense in their language, so Whorf says they rarely think of the past. • The Penan people, who live in Borneo, have one word for he, one word for she, but six words for we in their language. What would this indicate about their culture and how they think? • Do the following similar phrases have different connotations? • • • “Girls’ night out” vs. “Ladies’ night out” “Fireman/woman” vs. “Fire Fighter” “Sportsmanship” vs. “Sportspersonship” “Stewardess” vs. “Flight Attendant” “Housewife” vs. “Homemaker” • Research shows bilingual children have a more accurate sense of self why do you think this?