How a Bill Becomes a Law The Journey 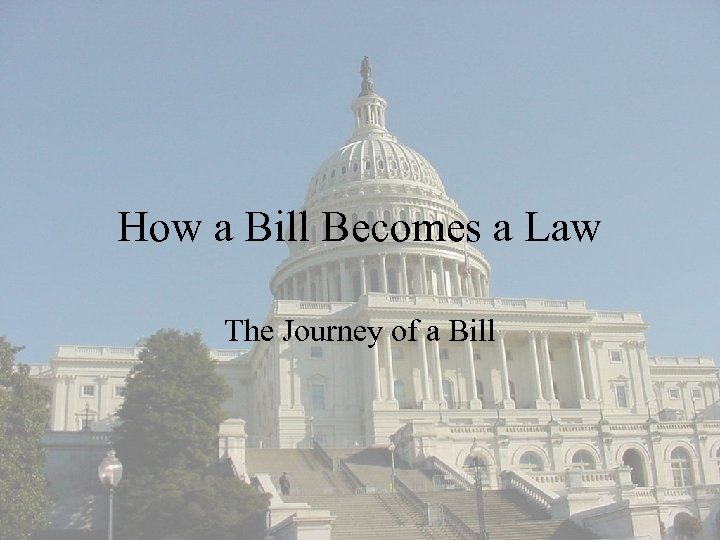 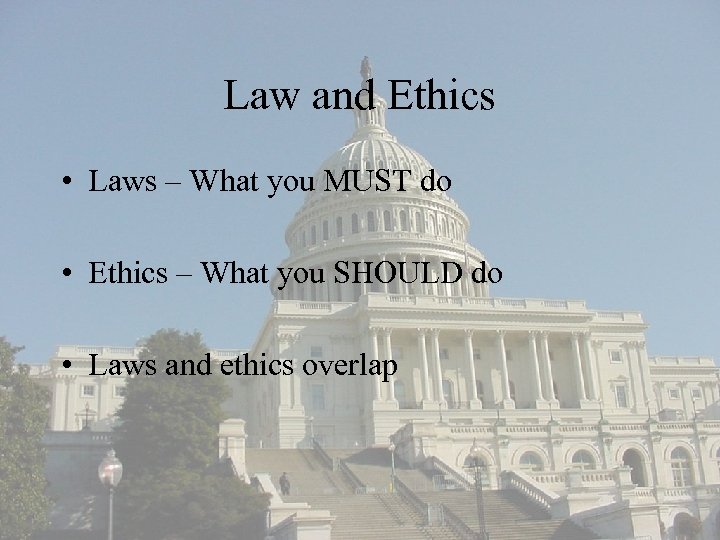 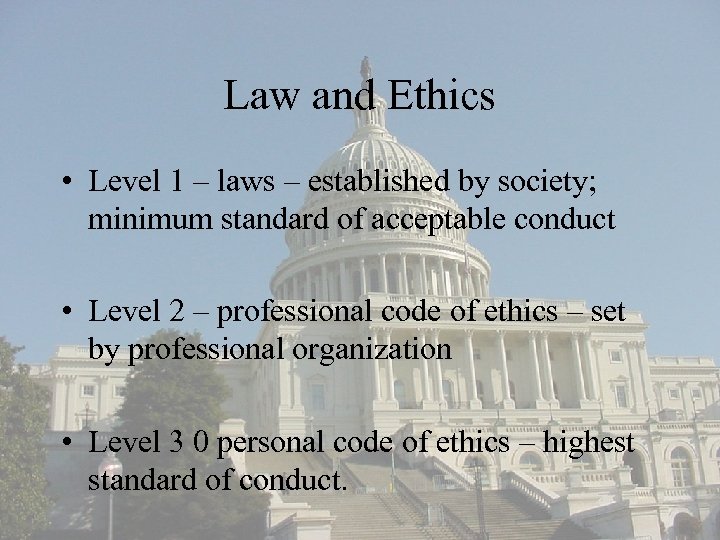 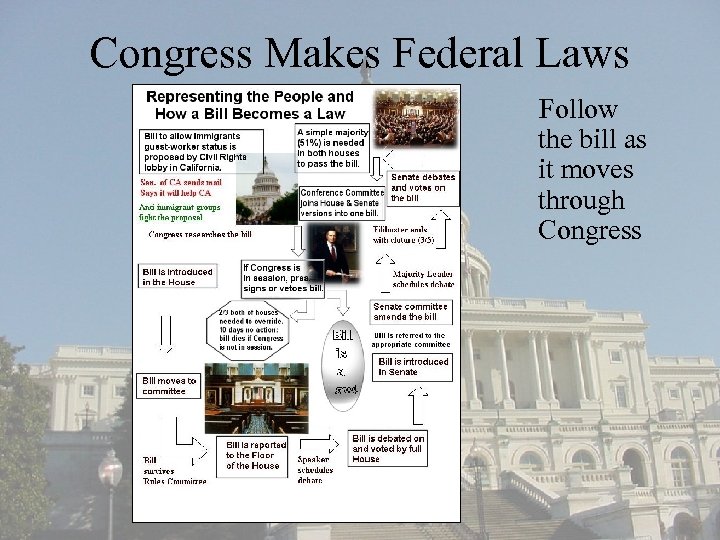 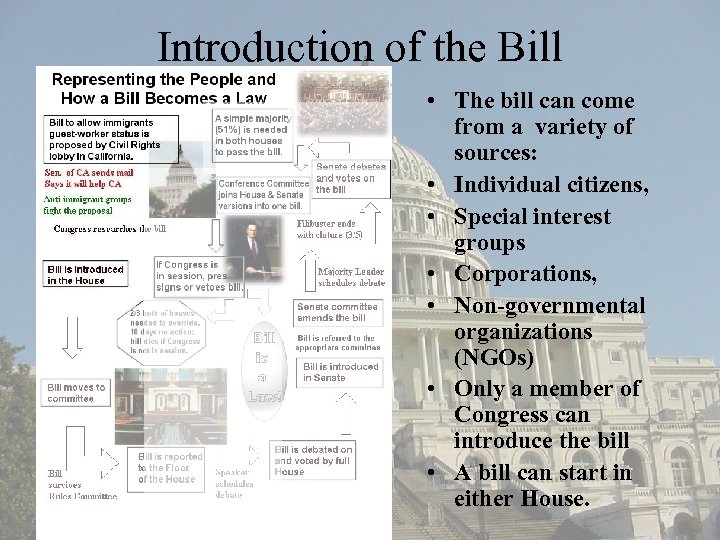 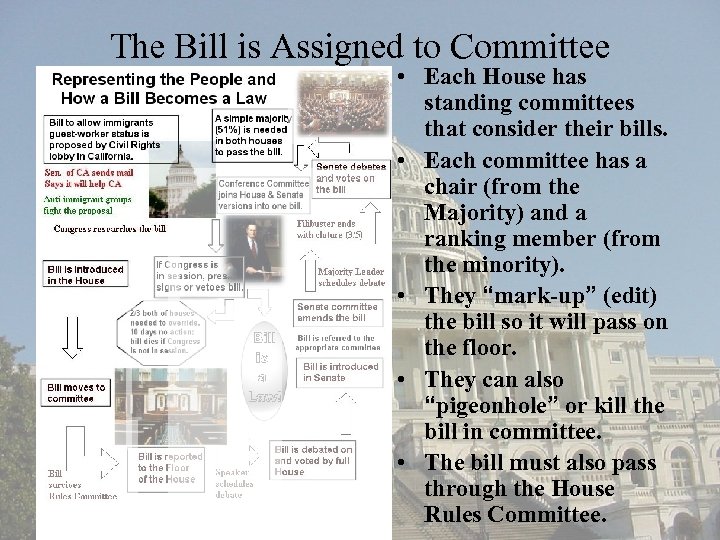 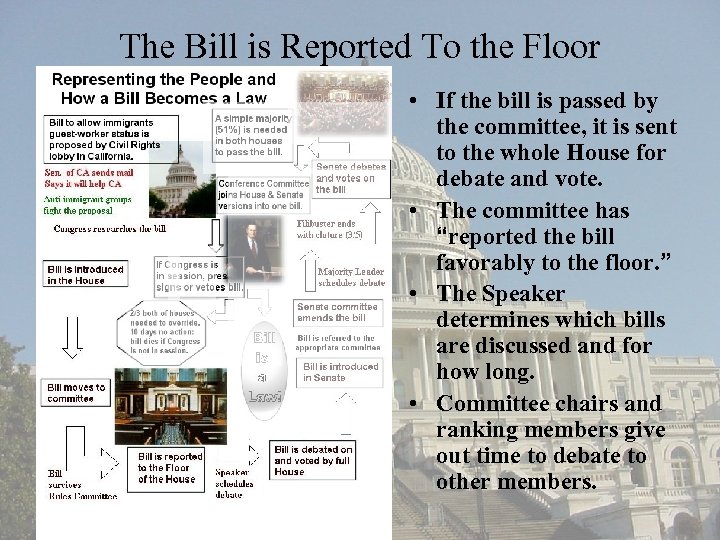 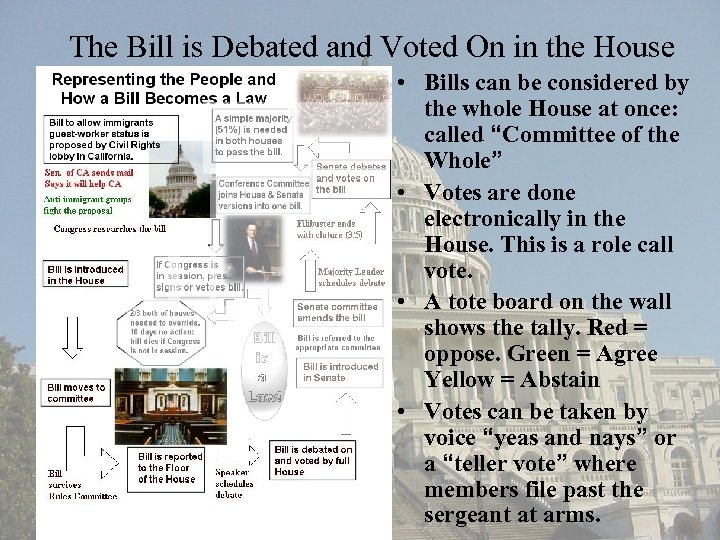 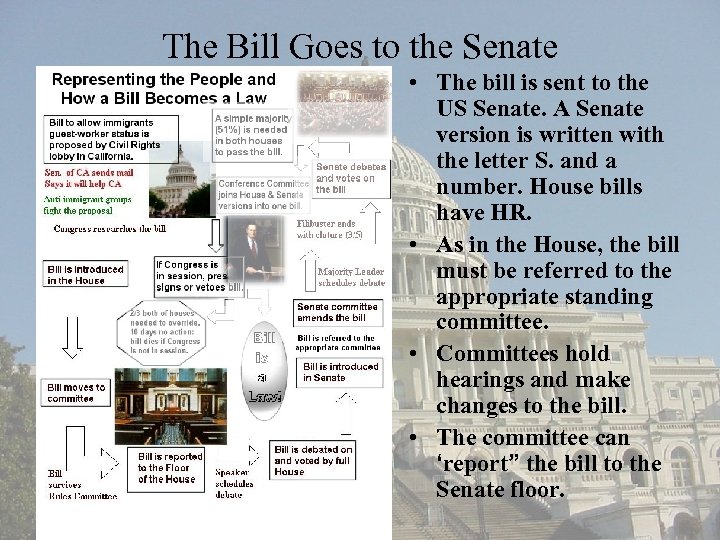 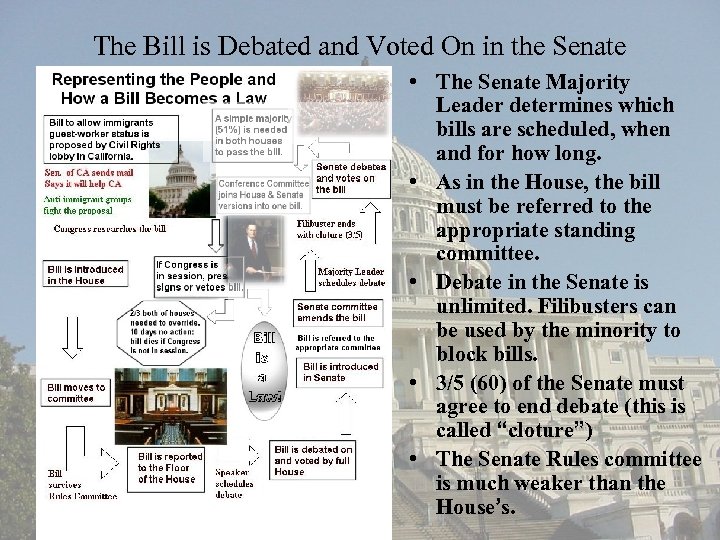 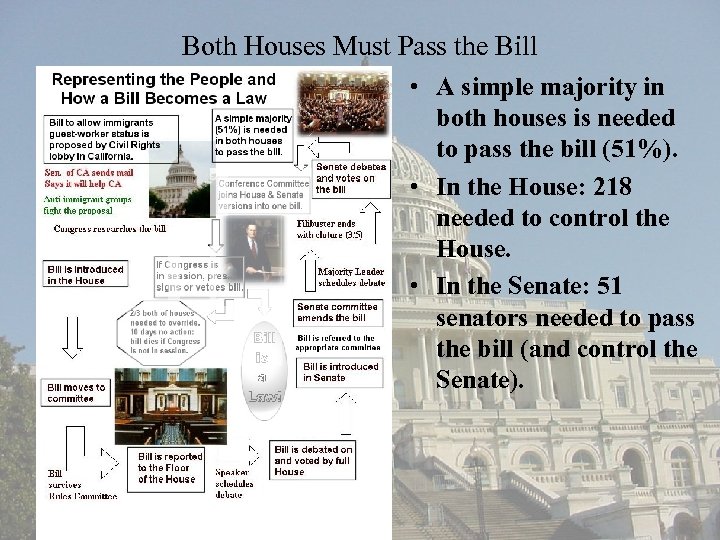 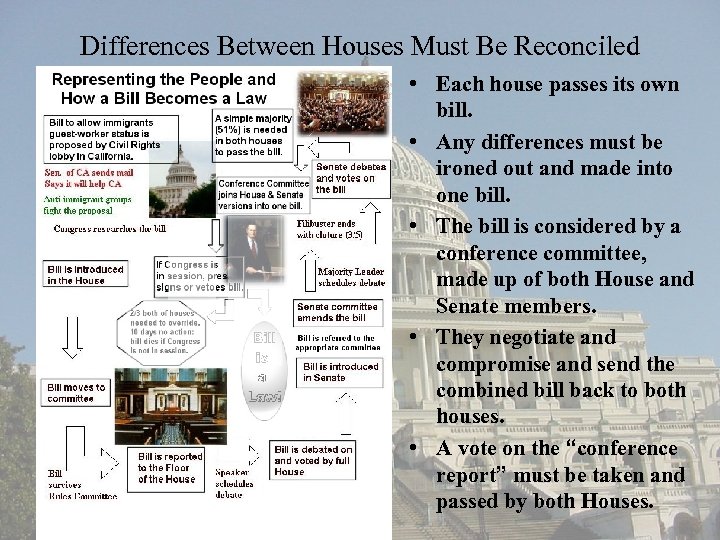 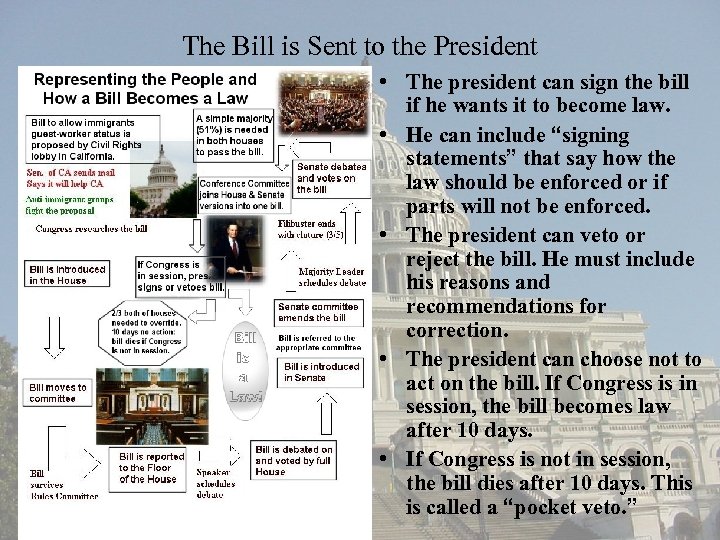 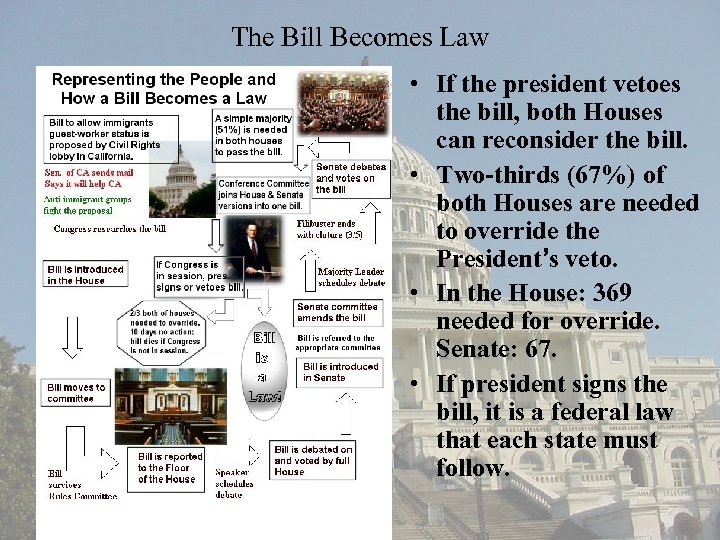 Скачать презентацию How a Bill Becomes a Law The Journey

How a Bill Becomes a Law The Journey of a Bill

Introduction of the Bill • The bill can come from a variety of sources: • Individual citizens, • Special interest groups • Corporations, • Non-governmental organizations (NGOs) • Only a member of Congress can introduce the bill • A bill can start in either House.

The Bill is Assigned to Committee • Each House has standing committees that consider their bills. • Each committee has a chair (from the Majority) and a ranking member (from the minority). • They “mark-up” (edit) the bill so it will pass on the floor. • They can also “pigeonhole” or kill the bill in committee. • The bill must also pass through the House Rules Committee.

The Bill is Reported To the Floor • If the bill is passed by the committee, it is sent to the whole House for debate and vote. • The committee has “reported the bill favorably to the floor. ” • The Speaker determines which bills are discussed and for how long. • Committee chairs and ranking members give out time to debate to other members.

The Bill is Debated and Voted On in the House • Bills can be considered by the whole House at once: called “Committee of the Whole” • Votes are done electronically in the House. This is a role call vote. • A tote board on the wall shows the tally. Red = oppose. Green = Agree Yellow = Abstain • Votes can be taken by voice “yeas and nays” or a “teller vote” where members file past the sergeant at arms.

The Bill Goes to the Senate • The bill is sent to the US Senate. A Senate version is written with the letter S. and a number. House bills have HR. • As in the House, the bill must be referred to the appropriate standing committee. • Committees hold hearings and make changes to the bill. • The committee can ‘report” the bill to the Senate floor.

The Bill is Debated and Voted On in the Senate • The Senate Majority Leader determines which bills are scheduled, when and for how long. • As in the House, the bill must be referred to the appropriate standing committee. • Debate in the Senate is unlimited. Filibusters can be used by the minority to block bills. • 3/5 (60) of the Senate must agree to end debate (this is called “cloture”) • The Senate Rules committee is much weaker than the House’s.

Differences Between Houses Must Be Reconciled • Each house passes its own bill. • Any differences must be ironed out and made into one bill. • The bill is considered by a conference committee, made up of both House and Senate members. • They negotiate and compromise and send the combined bill back to both houses. • A vote on the “conference report” must be taken and passed by both Houses.

The Bill Becomes Law • If the president vetoes the bill, both Houses can reconsider the bill. • Two-thirds (67%) of both Houses are needed to override the President’s veto. • In the House: 369 needed for override. Senate: 67. • If president signs the bill, it is a federal law that each state must follow.