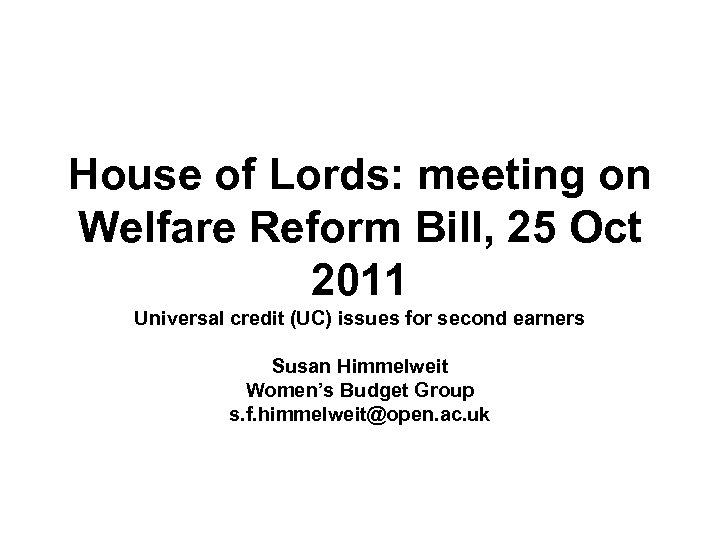 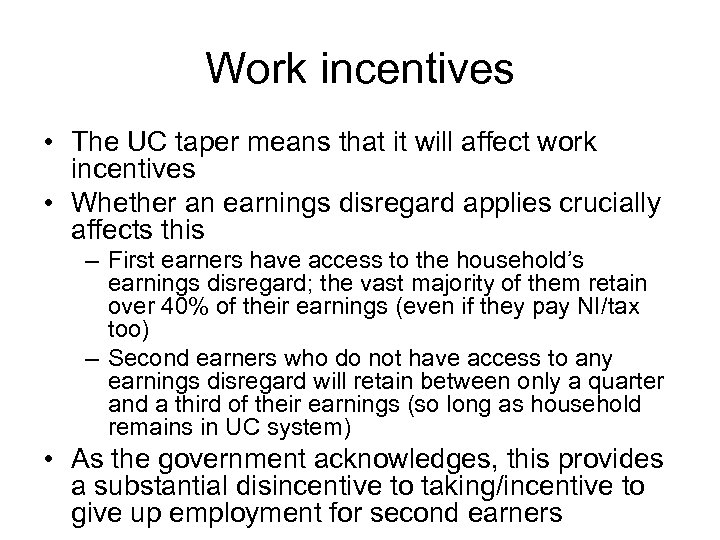 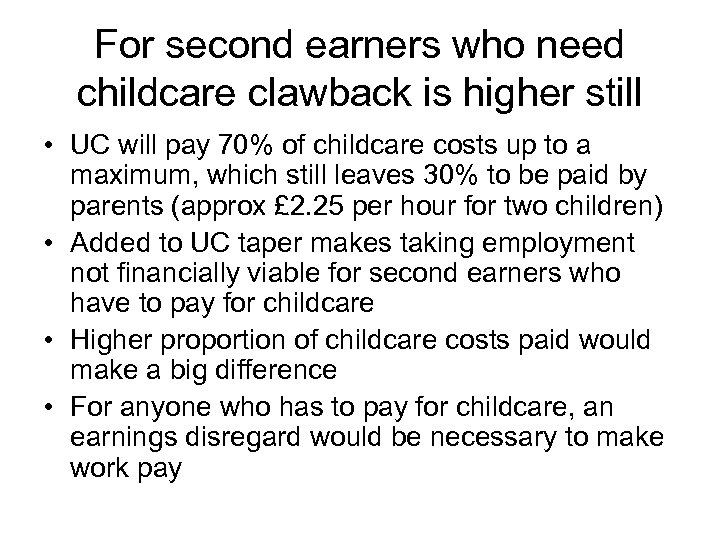 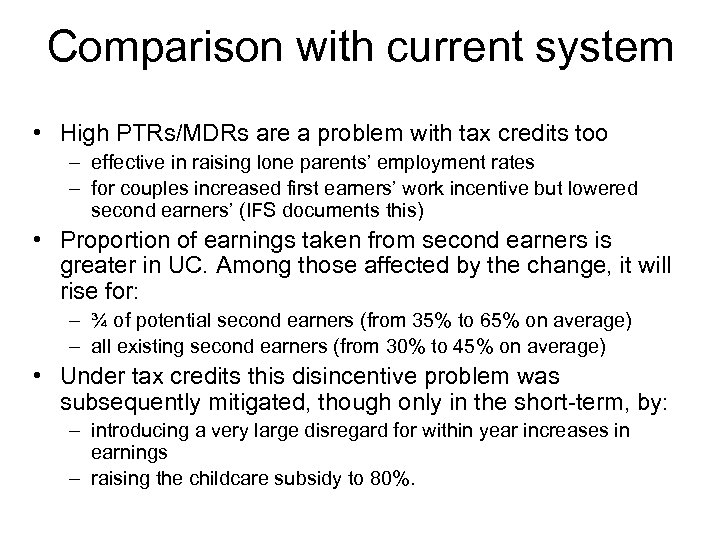 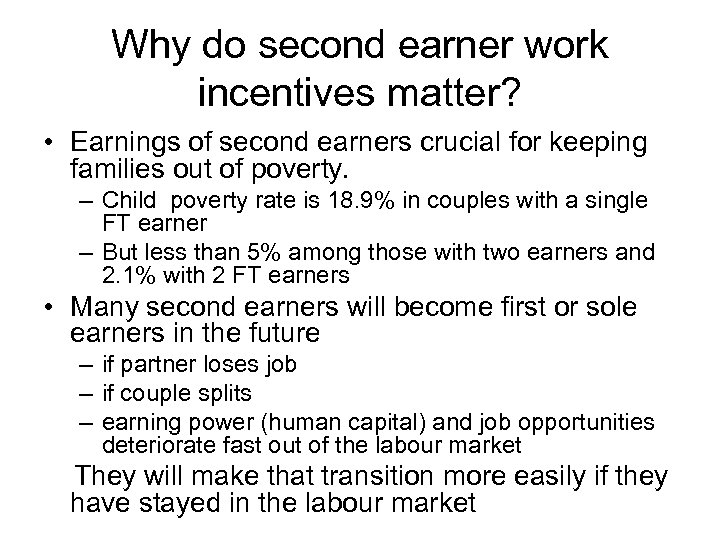 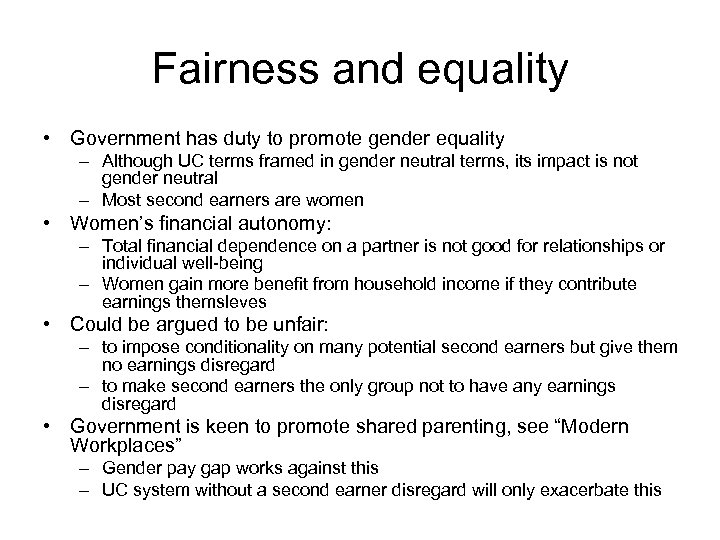 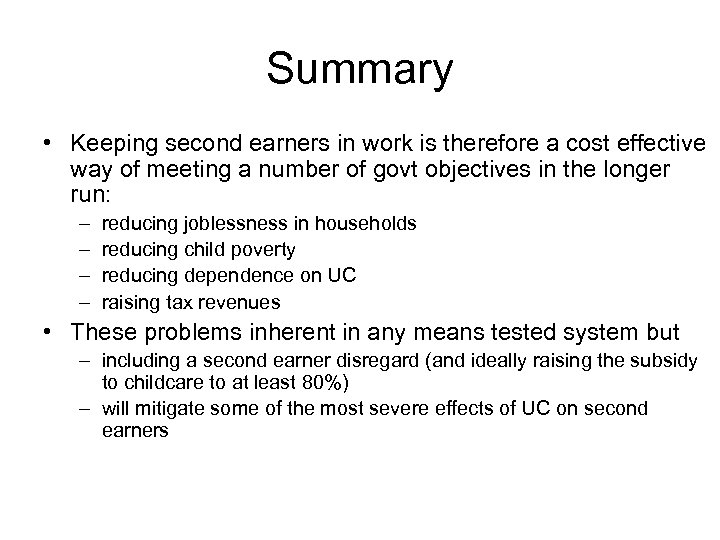 Work incentives • The UC taper means that it will affect work incentives • Whether an earnings disregard applies crucially affects this – First earners have access to the household’s earnings disregard; the vast majority of them retain over 40% of their earnings (even if they pay NI/tax too) – Second earners who do not have access to any earnings disregard will retain between only a quarter and a third of their earnings (so long as household remains in UC system) • As the government acknowledges, this provides a substantial disincentive to taking/incentive to give up employment for second earners

For second earners who need childcare clawback is higher still • UC will pay 70% of childcare costs up to a maximum, which still leaves 30% to be paid by parents (approx £ 2. 25 per hour for two children) • Added to UC taper makes taking employment not financially viable for second earners who have to pay for childcare • Higher proportion of childcare costs paid would make a big difference • For anyone who has to pay for childcare, an earnings disregard would be necessary to make work pay

Comparison with current system • High PTRs/MDRs are a problem with tax credits too – effective in raising lone parents’ employment rates – for couples increased first earners’ work incentive but lowered second earners’ (IFS documents this) • Proportion of earnings taken from second earners is greater in UC. Among those affected by the change, it will rise for: – ¾ of potential second earners (from 35% to 65% on average) – all existing second earners (from 30% to 45% on average) • Under tax credits this disincentive problem was subsequently mitigated, though only in the short-term, by: – introducing a very large disregard for within year increases in earnings – raising the childcare subsidy to 80%.

Why do second earner work incentives matter? • Earnings of second earners crucial for keeping families out of poverty. – Child poverty rate is 18. 9% in couples with a single FT earner – But less than 5% among those with two earners and 2. 1% with 2 FT earners • Many second earners will become first or sole earners in the future – if partner loses job – if couple splits – earning power (human capital) and job opportunities deteriorate fast out of the labour market They will make that transition more easily if they have stayed in the labour market

Fairness and equality • Government has duty to promote gender equality – Although UC terms framed in gender neutral terms, its impact is not gender neutral – Most second earners are women • Women’s financial autonomy: – Total financial dependence on a partner is not good for relationships or individual well-being – Women gain more benefit from household income if they contribute earnings themsleves • Could be argued to be unfair: – to impose conditionality on many potential second earners but give them no earnings disregard – to make second earners the only group not to have any earnings disregard • Government is keen to promote shared parenting, see “Modern Workplaces” – Gender pay gap works against this – UC system without a second earner disregard will only exacerbate this

Summary • Keeping second earners in work is therefore a cost effective way of meeting a number of govt objectives in the longer run: – – reducing joblessness in households reducing child poverty reducing dependence on UC raising tax revenues • These problems inherent in any means tested system but – including a second earner disregard (and ideally raising the subsidy to childcare to at least 80%) – will mitigate some of the most severe effects of UC on second earners