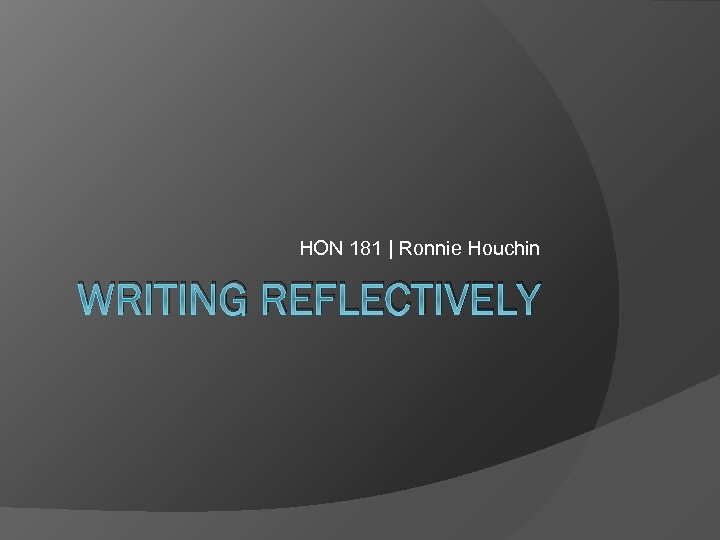 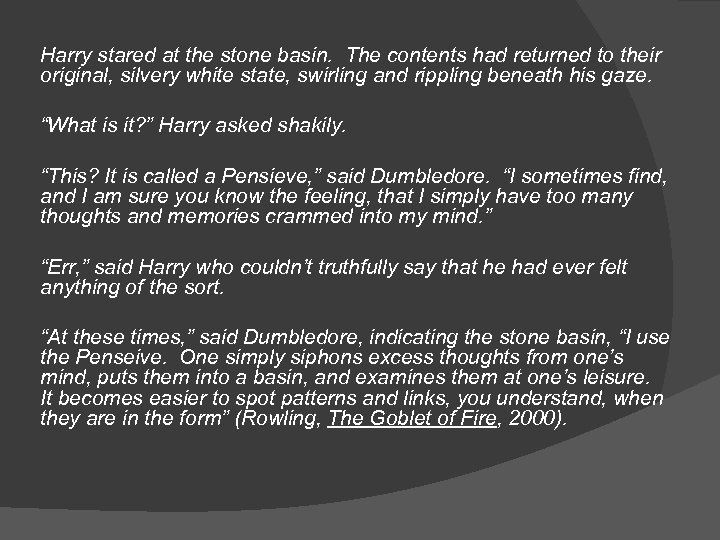 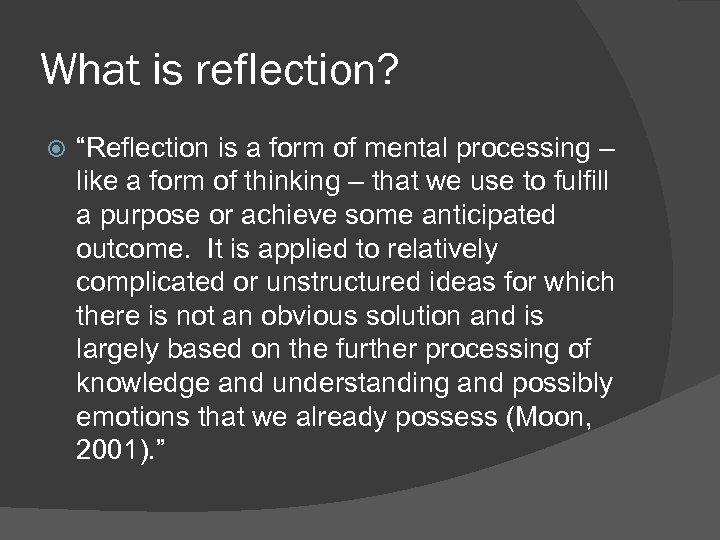 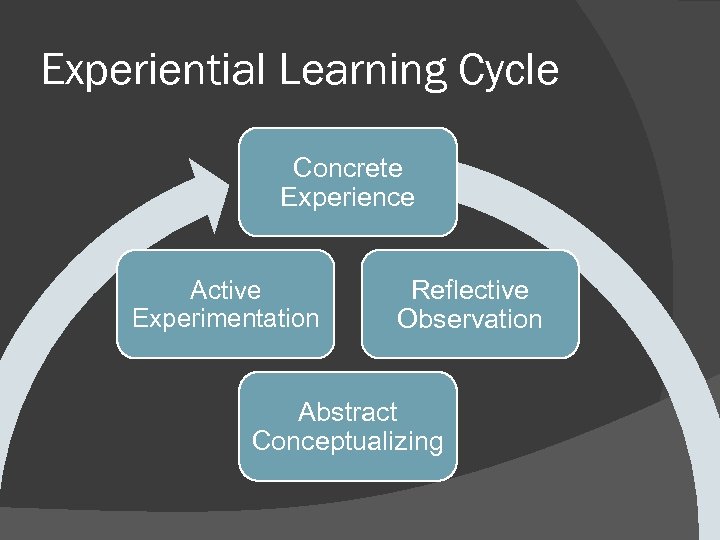 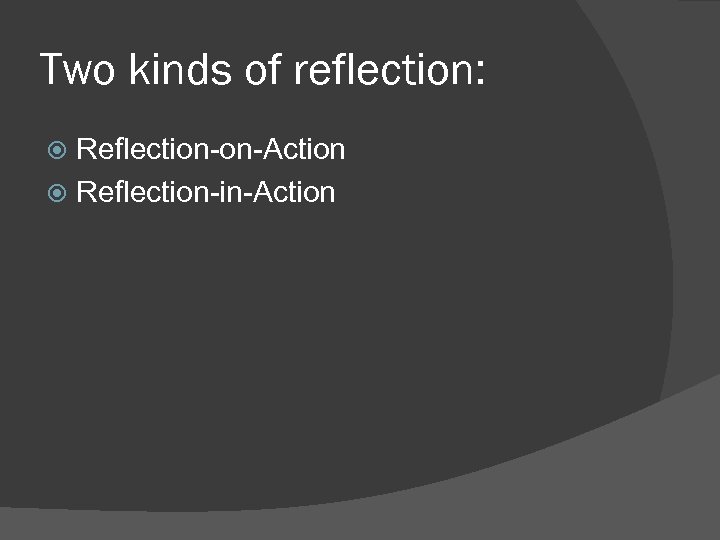 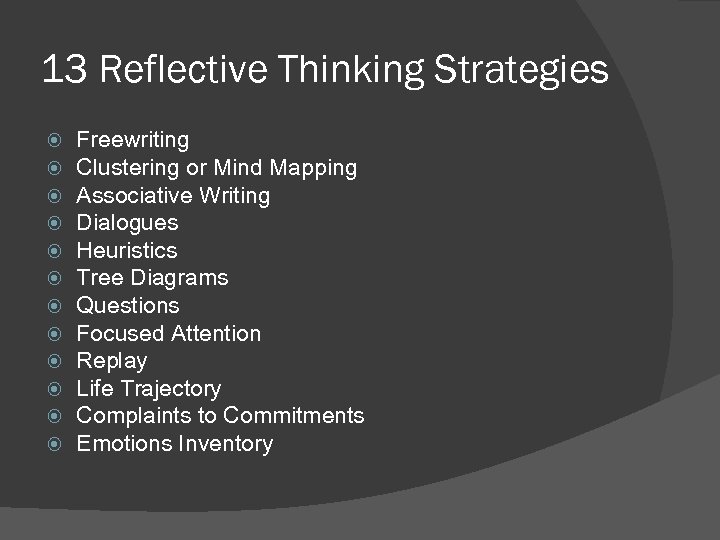 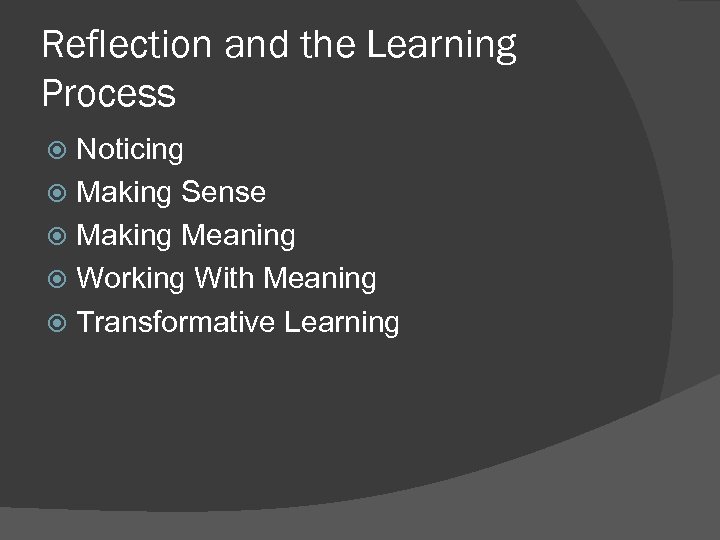 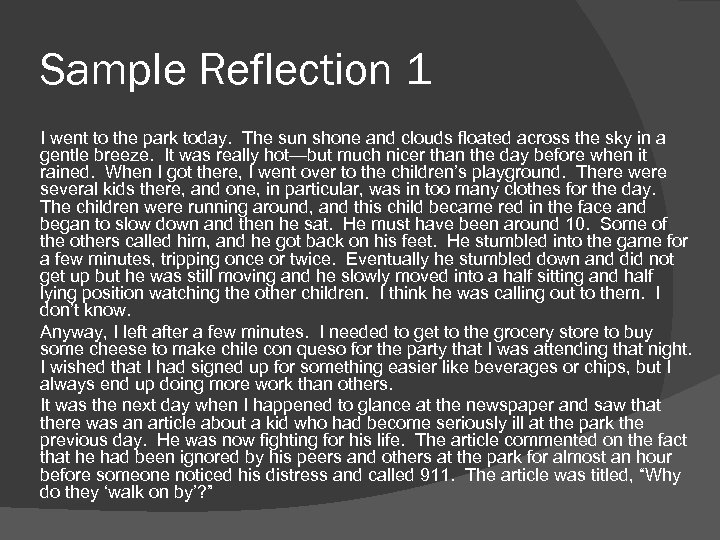 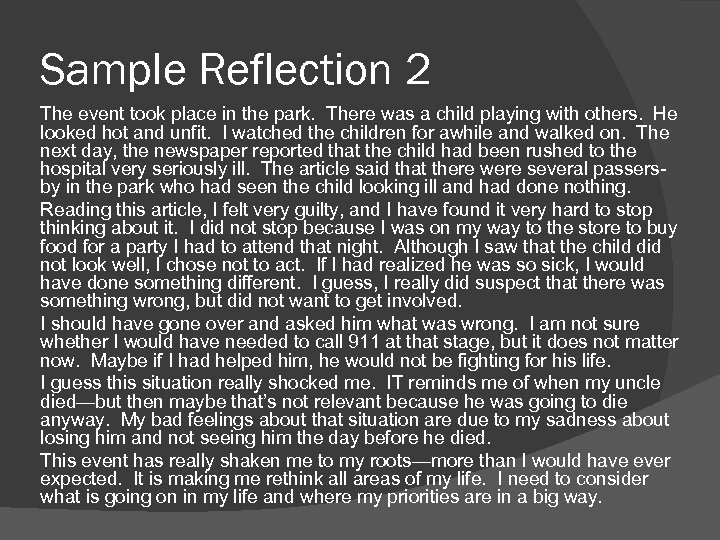 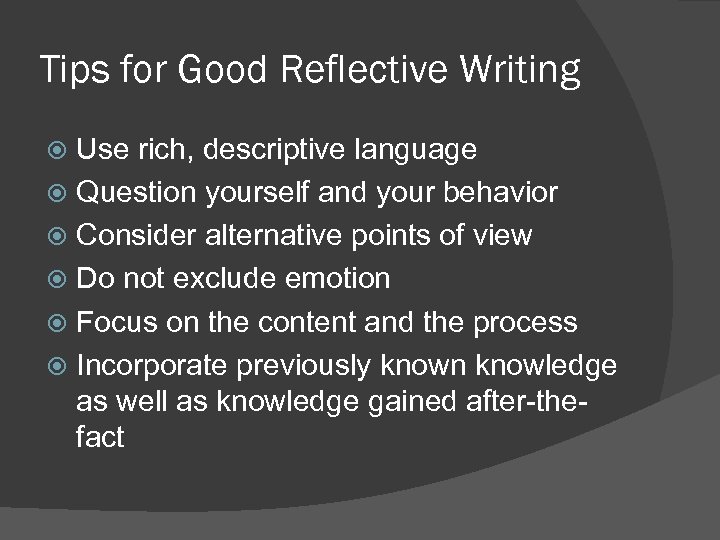 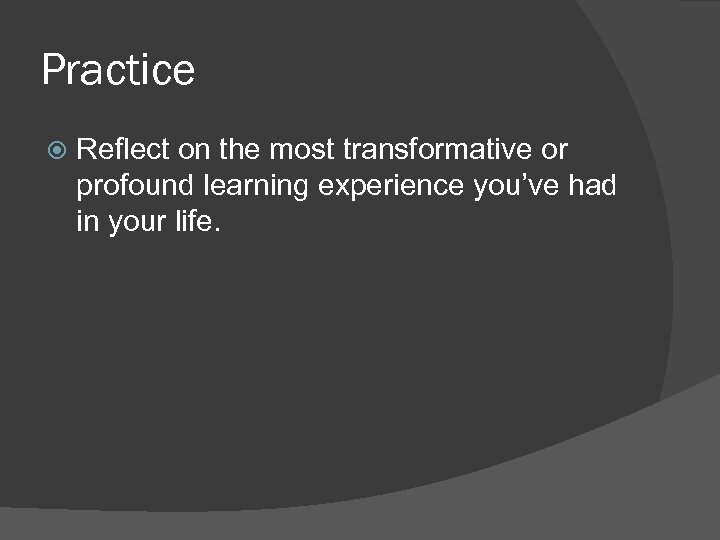 Harry stared at the stone basin. The contents had returned to their original, silvery white state, swirling and rippling beneath his gaze. “What is it? ” Harry asked shakily. “This? It is called a Pensieve, ” said Dumbledore. “I sometimes find, and I am sure you know the feeling, that I simply have too many thoughts and memories crammed into my mind. ” “Err, ” said Harry who couldn’t truthfully say that he had ever felt anything of the sort. “At these times, ” said Dumbledore, indicating the stone basin, “I use the Penseive. One simply siphons excess thoughts from one’s mind, puts them into a basin, and examines them at one’s leisure. It becomes easier to spot patterns and links, you understand, when they are in the form” (Rowling, The Goblet of Fire, 2000).

What is reflection? “Reflection is a form of mental processing – like a form of thinking – that we use to fulfill a purpose or achieve some anticipated outcome. It is applied to relatively complicated or unstructured ideas for which there is not an obvious solution and is largely based on the further processing of knowledge and understanding and possibly emotions that we already possess (Moon, 2001). ”

Why reflect? Surface Learning vs. Deep Learning Surface Learning: concerned with memorization of material for short-term retention Deep Learning: concerned with understanding the material and the synthesis of knowledge “It is not sufficiently simply to have an experience in order to learn. Without reflecting upon this experience, it may quickly be forgotten, or its learning potential lost. It is from the feelings and thoughts emerging from this reflection that generalizations or concepts can be generated. And it is generalizations that allow new situations to be tackled effectively (Gibbs, 1998). ”

Sample Reflection 1 I went to the park today. The sun shone and clouds floated across the sky in a gentle breeze. It was really hot—but much nicer than the day before when it rained. When I got there, I went over to the children’s playground. There were several kids there, and one, in particular, was in too many clothes for the day. The children were running around, and this child became red in the face and began to slow down and then he sat. He must have been around 10. Some of the others called him, and he got back on his feet. He stumbled into the game for a few minutes, tripping once or twice. Eventually he stumbled down and did not get up but he was still moving and he slowly moved into a half sitting and half lying position watching the other children. I think he was calling out to them. I don’t know. Anyway, I left after a few minutes. I needed to get to the grocery store to buy some cheese to make chile con queso for the party that I was attending that night. I wished that I had signed up for something easier like beverages or chips, but I always end up doing more work than others. It was the next day when I happened to glance at the newspaper and saw that there was an article about a kid who had become seriously ill at the park the previous day. He was now fighting for his life. The article commented on the fact that he had been ignored by his peers and others at the park for almost an hour before someone noticed his distress and called 911. The article was titled, “Why do they ‘walk on by’? ”

Sample Reflection 2 The event took place in the park. There was a child playing with others. He looked hot and unfit. I watched the children for awhile and walked on. The next day, the newspaper reported that the child had been rushed to the hospital very seriously ill. The article said that there were several passersby in the park who had seen the child looking ill and had done nothing. Reading this article, I felt very guilty, and I have found it very hard to stop thinking about it. I did not stop because I was on my way to the store to buy food for a party I had to attend that night. Although I saw that the child did not look well, I chose not to act. If I had realized he was so sick, I would have done something different. I guess, I really did suspect that there was something wrong, but did not want to get involved. I should have gone over and asked him what was wrong. I am not sure whether I would have needed to call 911 at that stage, but it does not matter now. Maybe if I had helped him, he would not be fighting for his life. I guess this situation really shocked me. IT reminds me of when my uncle died—but then maybe that’s not relevant because he was going to die anyway. My bad feelings about that situation are due to my sadness about losing him and not seeing him the day before he died. This event has really shaken me to my roots—more than I would have ever expected. It is making me rethink all areas of my life. I need to consider what is going on in my life and where my priorities are in a big way.

Tips for Good Reflective Writing Use rich, descriptive language Question yourself and your behavior Consider alternative points of view Do not exclude emotion Focus on the content and the process Incorporate previously known knowledge as well as knowledge gained after-thefact

Practice Reflect on the most transformative or profound learning experience you’ve had in your life.

ACADEMIC WRITING Part 2 What we shall

Academic writing The Structure of Course: