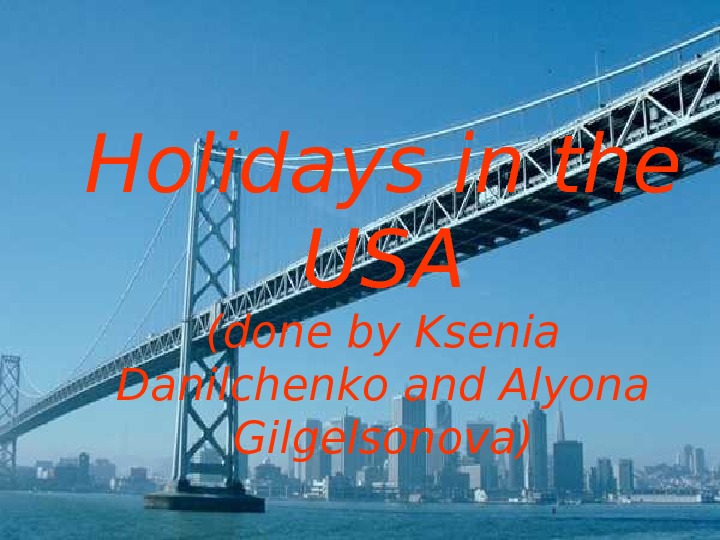 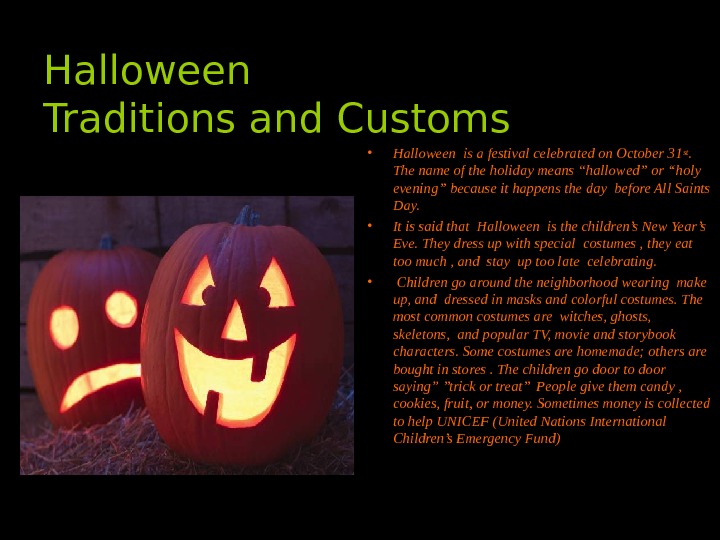 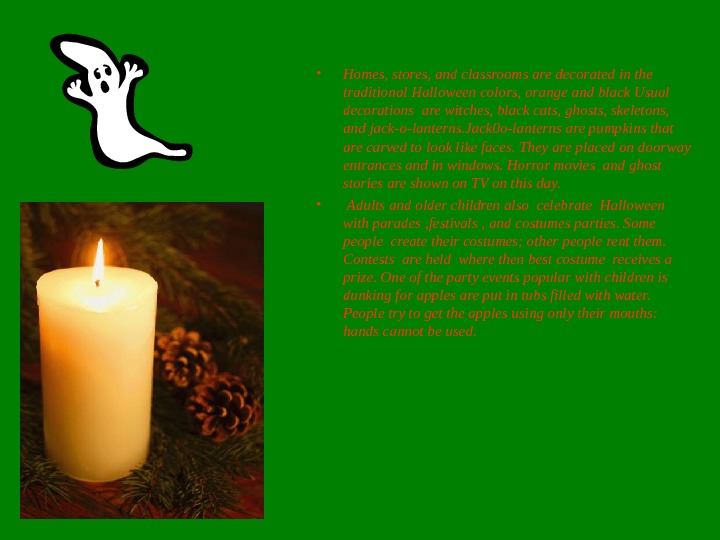 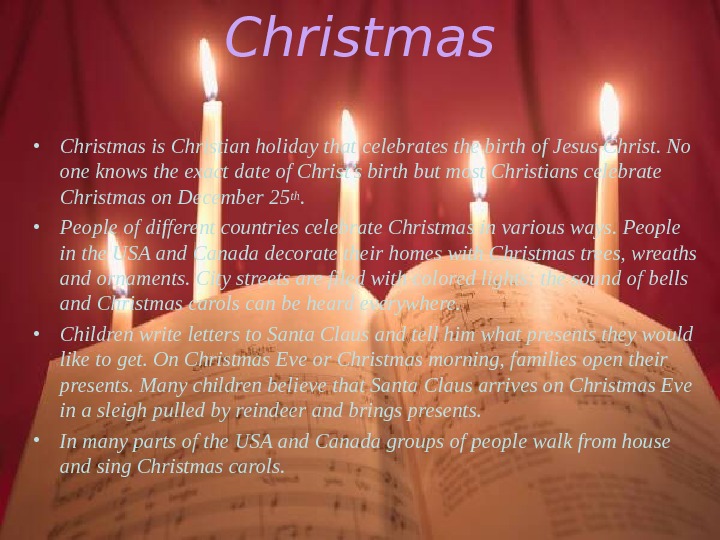 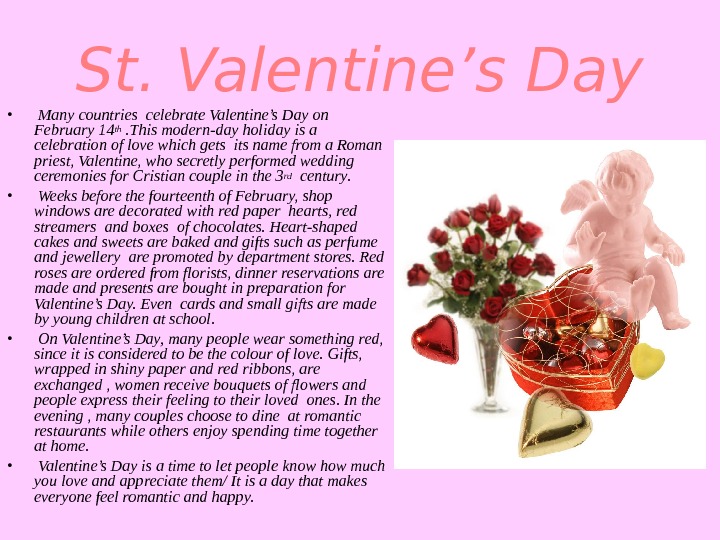 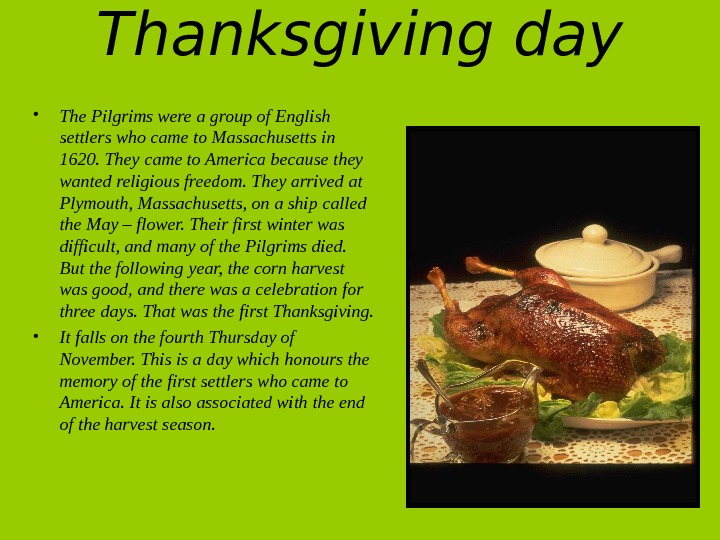 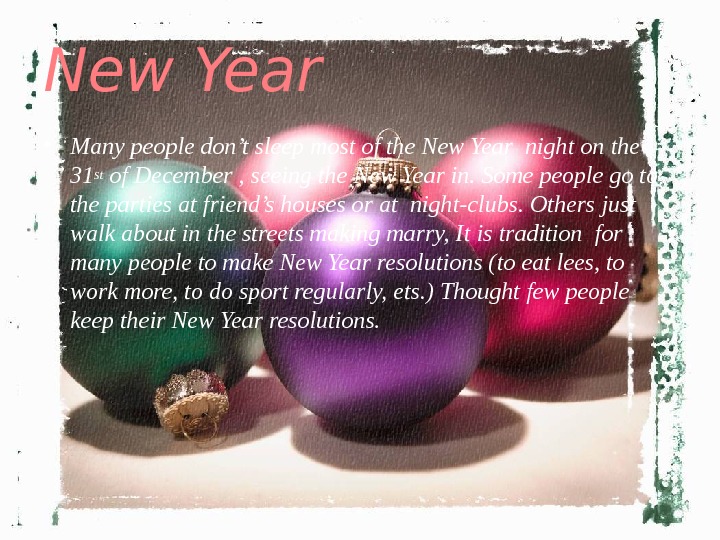 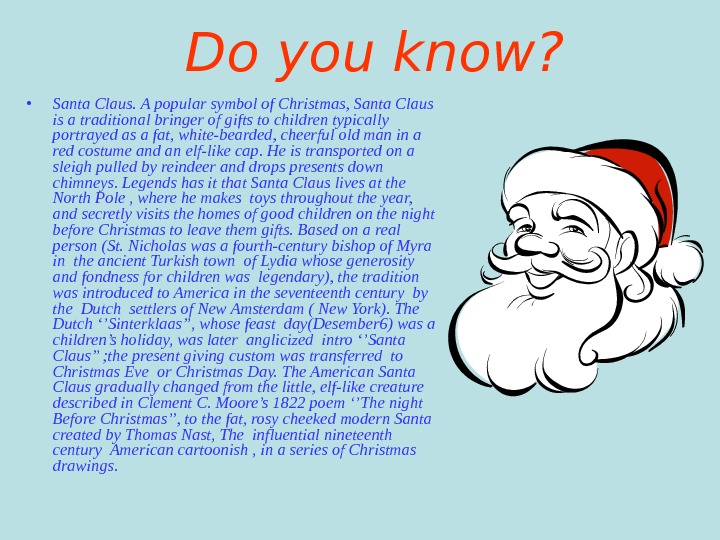 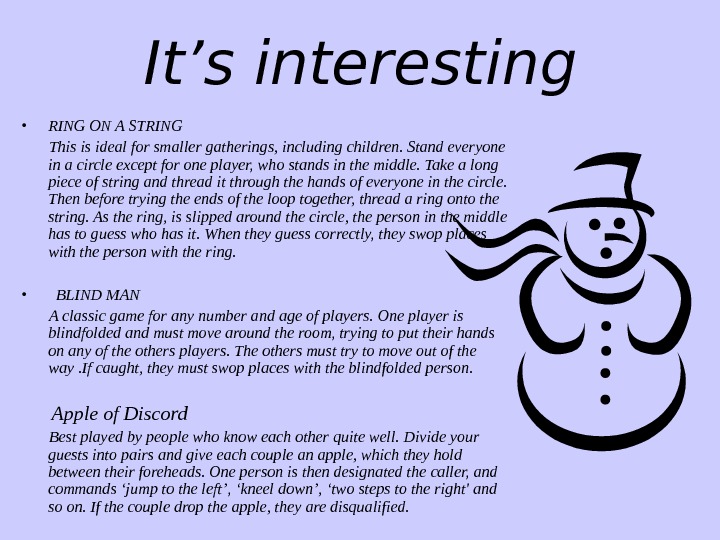 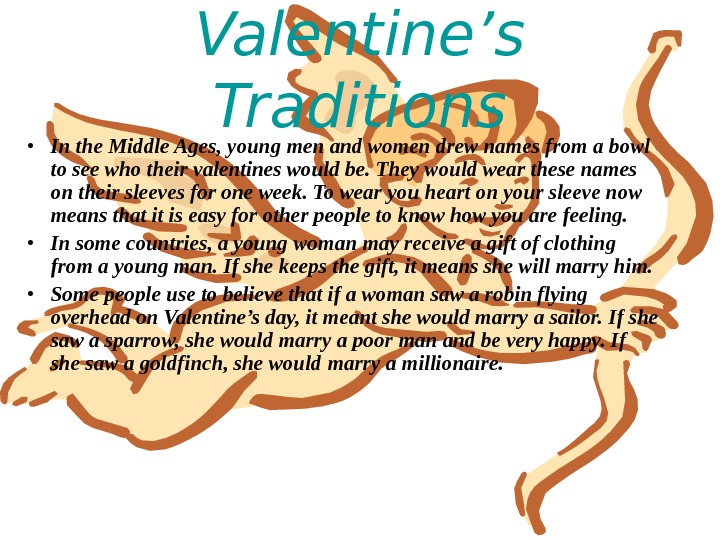 Скачать презентацию Holidays in the USA ( done by Ksenia

Holidays in the USA ( done by Ksenia Danilchenko and Alyona Gilgelsonova)

Halloween Traditions and Customs • Halloween is a festival celebrated on October 31 st. The name of the holiday means “hallowed” or “holy evening” because it happens the day before All Saints Day. • It is said that Halloween is the children’s New Year’s Eve. They dress up with special costumes , they eat too much , and stay up too late celebrating. • Children go around the neighborhood wearing make up, and dressed in masks and colorful costumes. The most common costumes are witches, ghosts, skeletons, and popular TV, movie and storybook characters. Some costumes are homemade; others are bought in stores. The children go door to door saying” ’’trick or treat’’ People give them candy , cookies, fruit, or money. Sometimes money is collected to help UNICEF (United Nations International Children’s Emergency Fund)

• Homes, stores, and classrooms are decorated in the traditional Halloween colors, orange and black Usual decorations are witches, black cats, ghosts, skeletons, and jack-o-lanterns. Jack 0 o-lanterns are pumpkins that are carved to look like faces. They are placed on doorway entrances and in windows. Horror movies and ghost stories are shown on TV on this day. • Adults and older children also celebrate Halloween with parades , festivals , and costumes parties. Some people create their costumes; other people rent them. Contests are held where then best costume receives a prize. One of the party events popular with children is dunking for apples are put in tubs filled with water. People try to get the apples using only their mouths: hands cannot be used.

Christmas • Christmas is Christian holiday that celebrates the birth of Jesus Christ. No one knows the exact date of Christ’s birth but most Christians celebrate Christmas on December 25 th. • People of different countries celebrate Christmas in various ways. People in the USA and Canada decorate their homes with Christmas trees, wreaths and ornaments. City streets are filed with colored lights: the sound of bells and Christmas carols can be heard everywhere. • Children write letters to Santa Claus and tell him what presents they would like to get. On Christmas Eve or Christmas morning, families open their presents. Many children believe that Santa Claus arrives on Christmas Eve in a sleigh pulled by reindeer and brings presents. • In many parts of the USA and Canada groups of people walk from house and sing Christmas carols.

St. Valentine’s Day • Many countries celebrate Valentine’s Day on February 14 th . This modern-day holiday is a celebration of love which gets its name from a Roman priest, Valentine, who secretly performed wedding ceremonies for Cristian couple in the 3 rd century. • Weeks before the fourteenth of February, shop windows are decorated with red paper hearts, red streamers and boxes of chocolates. Heart-shaped cakes and sweets are baked and gifts such as perfume and jewellery are promoted by department stores. Red roses are ordered from florists, dinner reservations are made and presents are bought in preparation for Valentine’s Day. Even cards and small gifts are made by young children at school. • On Valentine’s Day, many people wear something red, since it is considered to be the colour of love. Gifts, wrapped in shiny paper and red ribbons, are exchanged , women receive bouquets of flowers and people express their feeling to their loved ones. In the evening , many couples choose to dine at romantic restaurants while others enjoy spending time together at home. • Valentine’s Day is a time to let people know how much you love and appreciate them/ It is a day that makes everyone feel romantic and happy.

Thanksgiving day • The Pilgrims were a group of English settlers who came to Massachusetts in 1620. They came to America because they wanted religious freedom. They arrived at Plymouth, Massachusetts, on a ship called the May – flower. Their first winter was difficult, and many of the Pilgrims died. But the following year, the corn harvest was good, and there was a celebration for three days. That was the first Thanksgiving. • It falls on the fourth Thursday of November. This is a day which honours the memory of the first settlers who came to America. It is also associated with the end of the harvest season.

New Year • Many people don’t sleep most of the New Year night on the 31 st of December , seeing the New Year in. Some people go to the parties at friend’s houses or at night-clubs. Others just walk about in the streets making marry, It is tradition for many people to make New Year resolutions (to eat lees, to work more, to do sport regularly, ets. ) Thought few people keep their New Year resolutions.

Do you know? • Santa Claus. A popular symbol of Christmas, Santa Claus is a traditional bringer of gifts to children typically portrayed as a fat, white-bearded, cheerful old man in a red costume and an elf-like cap. He is transported on a sleigh pulled by reindeer and drops presents down chimneys. Legends has it that Santa Claus lives at the North Pole , where he makes toys throughout the year, and secretly visits the homes of good children on the night before Christmas to leave them gifts. Based on a real person (St. Nicholas was a fourth-century bishop of Myra in the ancient Turkish town of Lydia whose generosity and fondness for children was legendary), the tradition was introduced to America in the seventeenth century by the Dutch settlers of New Amsterdam ( New York). The Dutch ‘’Sinterklaas’’, whose feast day(Desember 6) was a children’s holiday, was later anglicized intro ‘’Santa Claus’’ ; the present giving custom was transferred to Christmas Eve or Christmas Day. The American Santa Claus gradually changed from the little, elf-like creature described in Clement C. Moore’s 1822 poem ‘’The night Before Christmas’’, to the fat, rosy cheeked modern Santa created by Thomas Nast, The influential nineteenth century American cartoonish , in a series of Christmas drawings.

It’s interesting • RING ON A STRING This is ideal for smaller gatherings, including children. Stand everyone in a circle except for one player, who stands in the middle. Take a long piece of string and thread it through the hands of everyone in the circle. Then before trying the ends of the loop together, thread a ring onto the string. As the ring, is slipped around the circle, the person in the middle has to guess who has it. When they guess correctly, they swop places with the person with the ring. • BLIND MAN A classic game for any number and age of players. One player is blindfolded and must move around the room, trying to put their hands on any of the others players. The others must try to move out of the way. If caught, they must swop places with the blindfolded person. Apple of Discord Best played by people who know each other quite well. Divide your guests into pairs and give each couple an apple, which they hold between their foreheads. One person is then designated the caller, and commands ‘jump to the left’, ‘kneel down’, ‘two steps to the right’ and so on. If the couple drop the apple, they are disqualified.

Valentine’s Traditions • In the Middle Ages, young men and women drew names from a bowl to see who their valentines would be. They would wear these names on their sleeves for one week. To wear you heart on your sleeve now means that it is easy for other people to know how you are feeling. • In some countries, a young woman may receive a gift of clothing from a young man. If she keeps the gift, it means she will marry him. • Some people use to believe that if a woman saw a robin flying overhead on Valentine’s day, it meant she would marry a sailor. If she saw a sparrow, she would marry a poor man and be very happy. If she saw a goldfinch, she would marry a millionaire.