History of ISO 9000 and Quality Improvement By 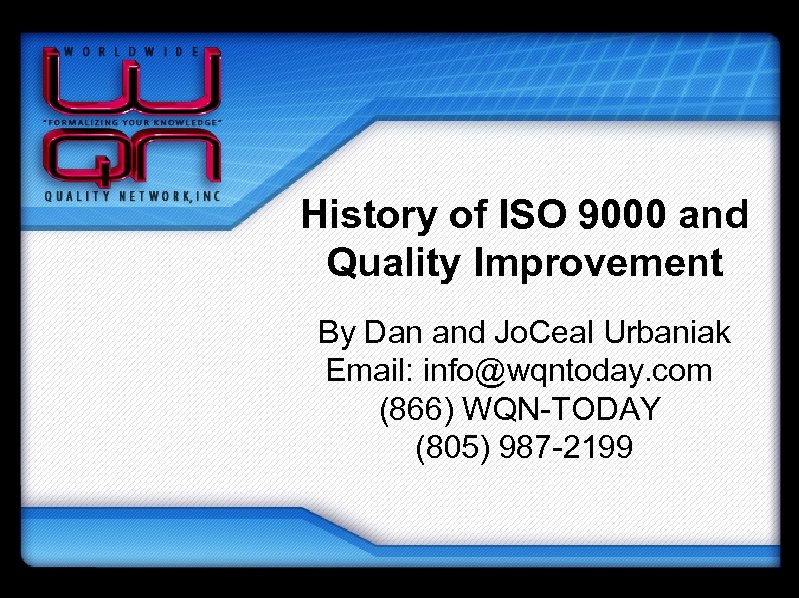 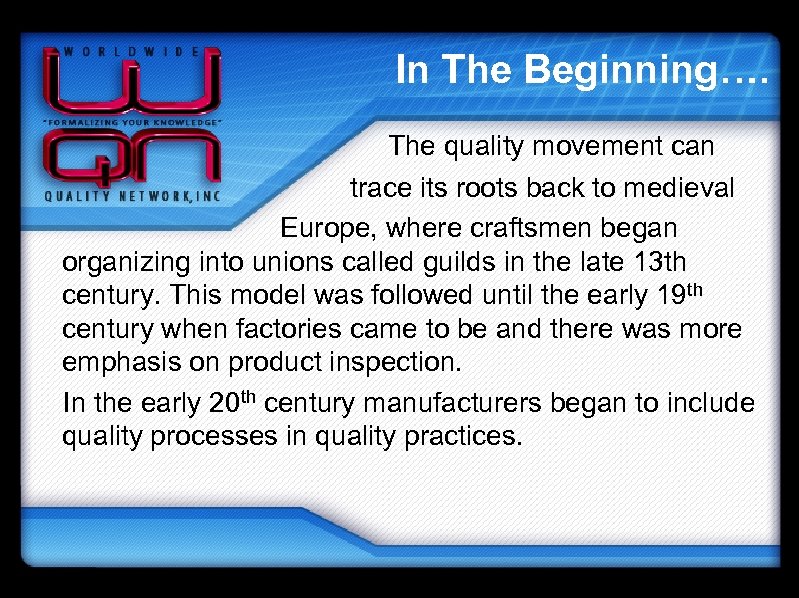 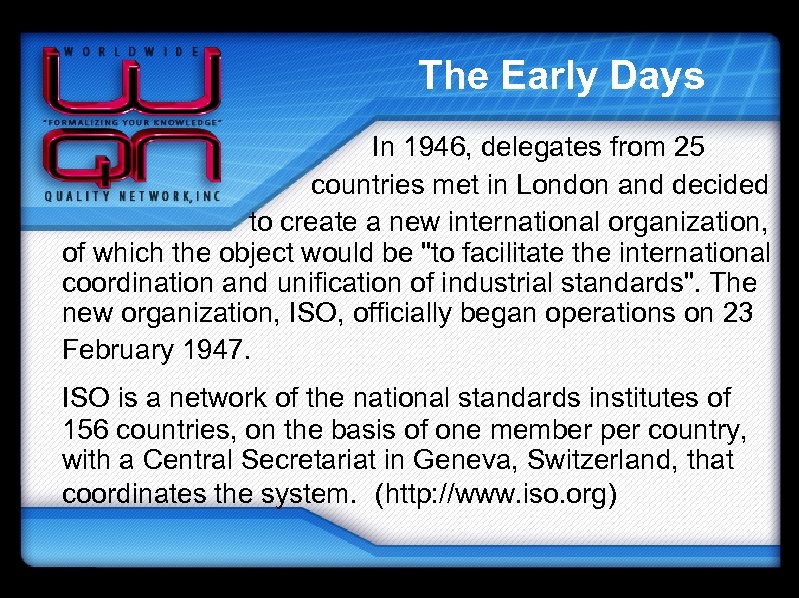 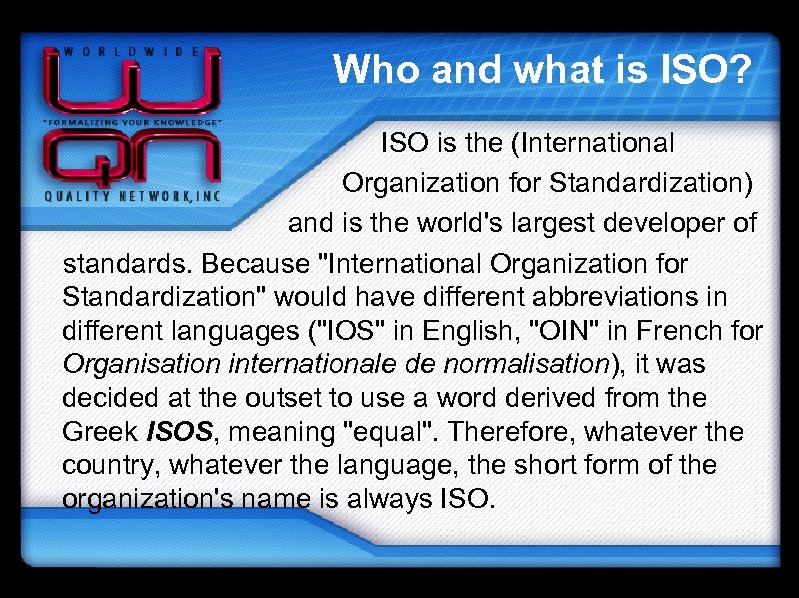 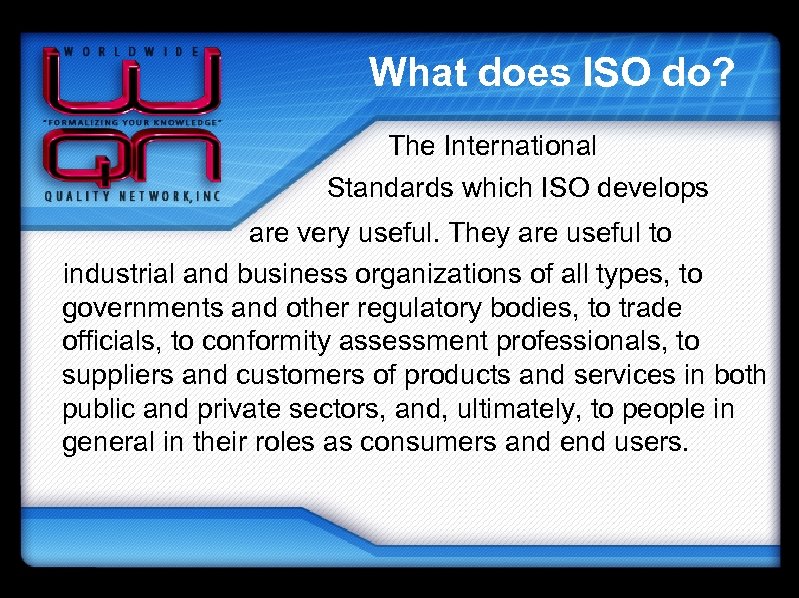 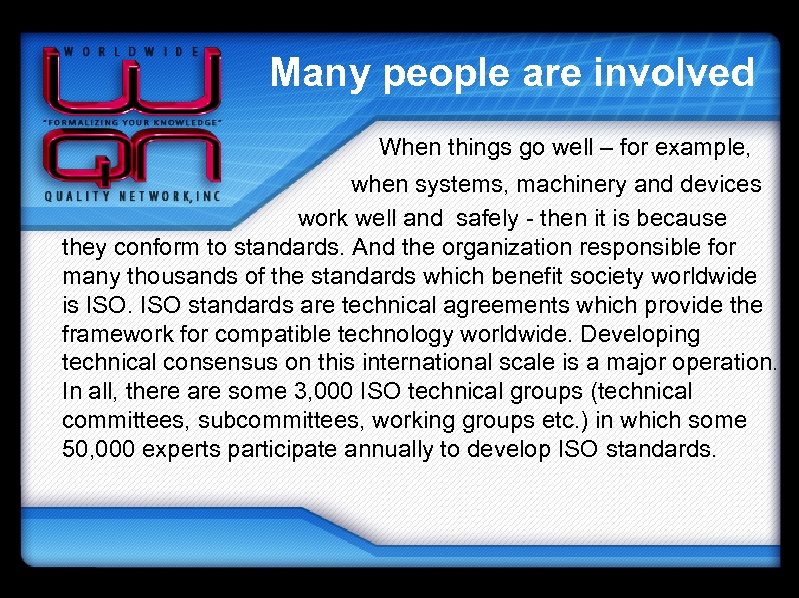 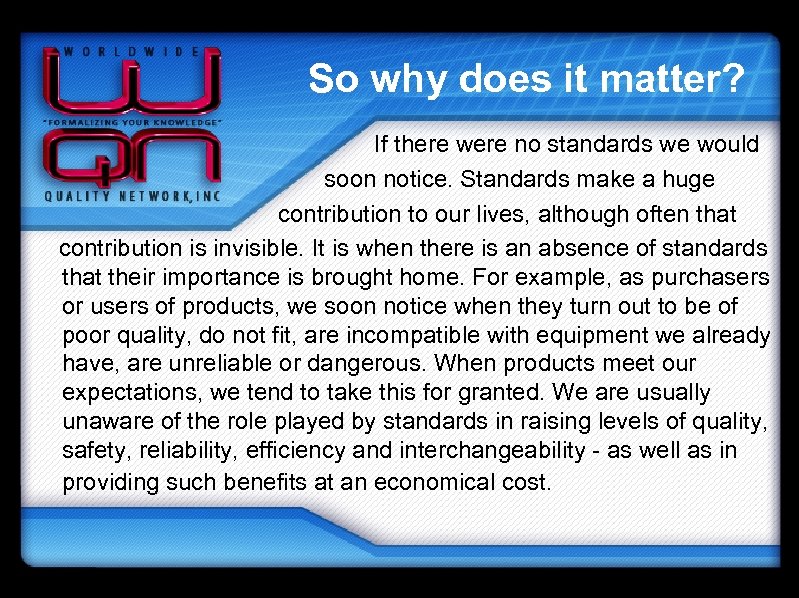 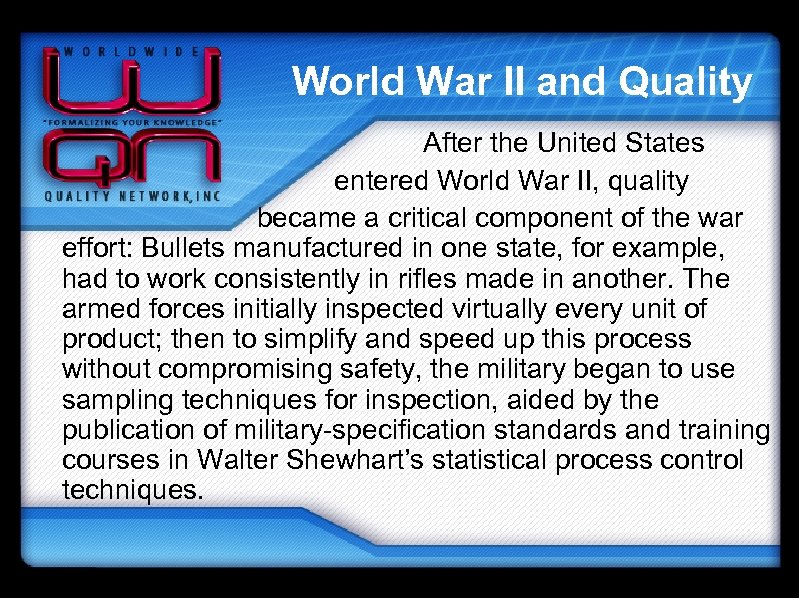 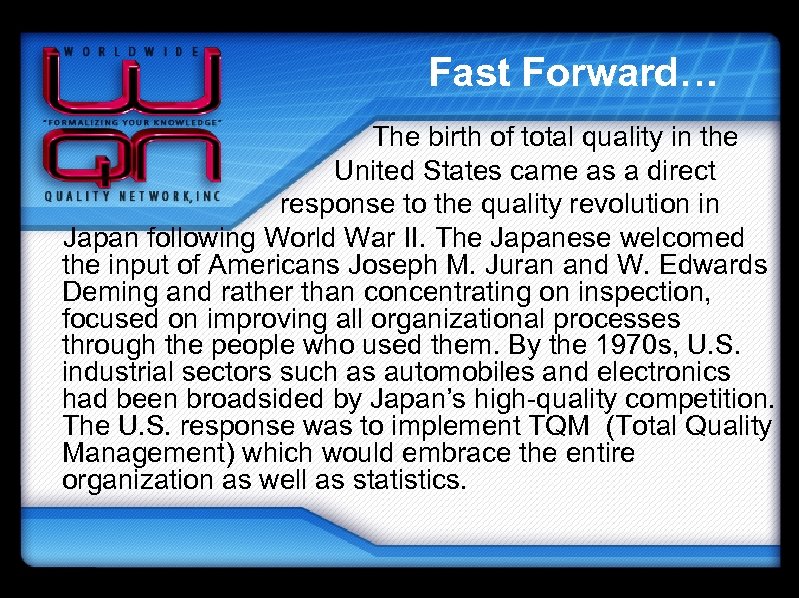 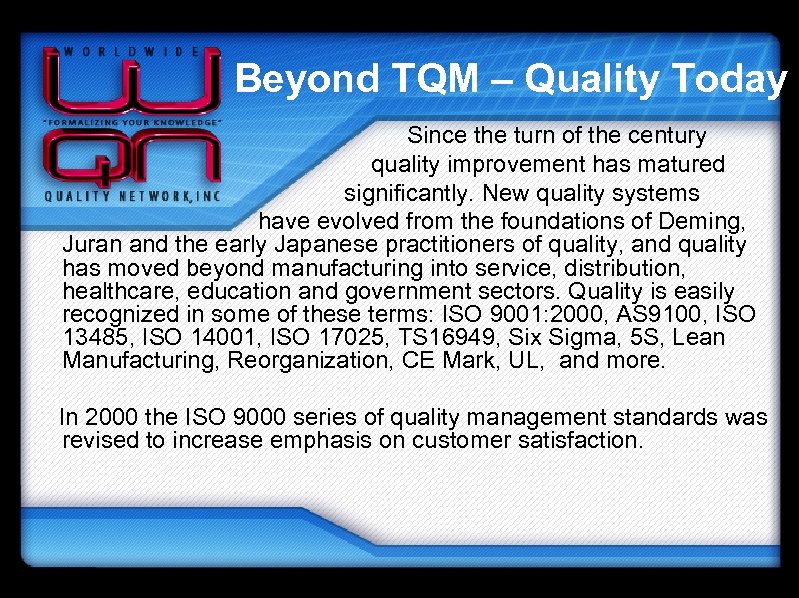 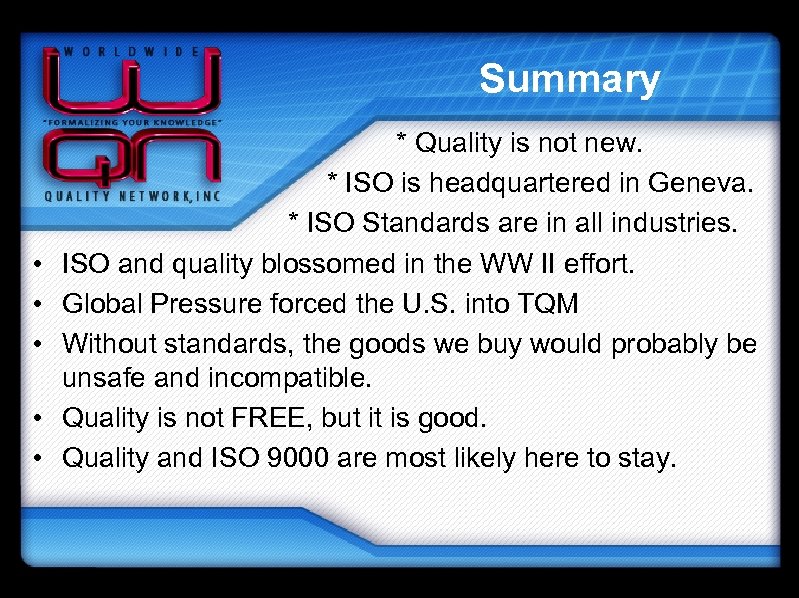 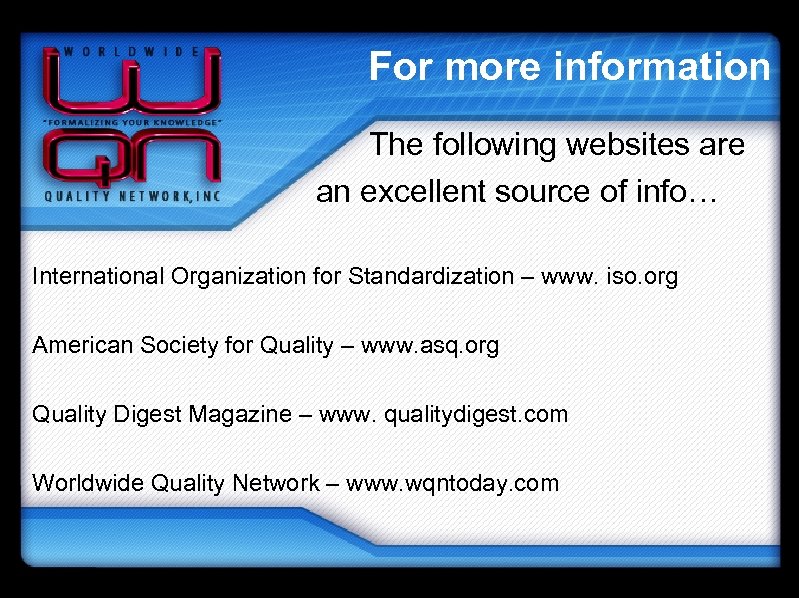 Скачать презентацию History of ISO 9000 and Quality Improvement By

In The Beginning…. The quality movement can trace its roots back to medieval Europe, where craftsmen began organizing into unions called guilds in the late 13 th century. This model was followed until the early 19 th century when factories came to be and there was more emphasis on product inspection. In the early 20 th century manufacturers began to include quality processes in quality practices.

The Early Days In 1946, delegates from 25 countries met in London and decided to create a new international organization, of which the object would be "to facilitate the international coordination and unification of industrial standards". The new organization, ISO, officially began operations on 23 February 1947. ISO is a network of the national standards institutes of 156 countries, on the basis of one member per country, with a Central Secretariat in Geneva, Switzerland, that coordinates the system. (http: //www. iso. org)

Who and what is ISO? ISO is the (International Organization for Standardization) and is the world's largest developer of standards. Because "International Organization for Standardization" would have different abbreviations in different languages ("IOS" in English, "OIN" in French for Organisation internationale de normalisation), it was decided at the outset to use a word derived from the Greek ISOS, meaning "equal". Therefore, whatever the country, whatever the language, the short form of the organization's name is always ISO.

What does ISO do? The International Standards which ISO develops are very useful. They are useful to industrial and business organizations of all types, to governments and other regulatory bodies, to trade officials, to conformity assessment professionals, to suppliers and customers of products and services in both public and private sectors, and, ultimately, to people in general in their roles as consumers and end users.

ISO makes the world better ISO standards contribute to making the development, manufacturing and supply of products and services more efficient, safer and cleaner. They make trade between countries easier and fairer. They provide governments with a technical base for health, safety and environmental legislation. They aid in transferring technology to developing countries. ISO standards also serve to safeguard consumers, and users in general, of products and services - as well as to make their lives simpler.

Many people are involved When things go well – for example, when systems, machinery and devices work well and safely - then it is because they conform to standards. And the organization responsible for many thousands of the standards which benefit society worldwide is ISO standards are technical agreements which provide the framework for compatible technology worldwide. Developing technical consensus on this international scale is a major operation. In all, there are some 3, 000 ISO technical groups (technical committees, subcommittees, working groups etc. ) in which some 50, 000 experts participate annually to develop ISO standards.

So why does it matter? If there were no standards we would soon notice. Standards make a huge contribution to our lives, although often that contribution is invisible. It is when there is an absence of standards that their importance is brought home. For example, as purchasers or users of products, we soon notice when they turn out to be of poor quality, do not fit, are incompatible with equipment we already have, are unreliable or dangerous. When products meet our expectations, we tend to take this for granted. We are usually unaware of the role played by standards in raising levels of quality, safety, reliability, efficiency and interchangeability - as well as in providing such benefits at an economical cost.

World War II and Quality After the United States entered World War II, quality became a critical component of the war effort: Bullets manufactured in one state, for example, had to work consistently in rifles made in another. The armed forces initially inspected virtually every unit of product; then to simplify and speed up this process without compromising safety, the military began to use sampling techniques for inspection, aided by the publication of military-specification standards and training courses in Walter Shewhart’s statistical process control techniques.

Fast Forward… The birth of total quality in the United States came as a direct response to the quality revolution in Japan following World War II. The Japanese welcomed the input of Americans Joseph M. Juran and W. Edwards Deming and rather than concentrating on inspection, focused on improving all organizational processes through the people who used them. By the 1970 s, U. S. industrial sectors such as automobiles and electronics had been broadsided by Japan’s high-quality competition. The U. S. response was to implement TQM (Total Quality Management) which would embrace the entire organization as well as statistics.

Beyond TQM – Quality Today Since the turn of the century quality improvement has matured significantly. New quality systems have evolved from the foundations of Deming, Juran and the early Japanese practitioners of quality, and quality has moved beyond manufacturing into service, distribution, healthcare, education and government sectors. Quality is easily recognized in some of these terms: ISO 9001: 2000, AS 9100, ISO 13485, ISO 14001, ISO 17025, TS 16949, Six Sigma, 5 S, Lean Manufacturing, Reorganization, CE Mark, UL, and more. In 2000 the ISO 9000 series of quality management standards was revised to increase emphasis on customer satisfaction.

Summary • • • * Quality is not new. * ISO is headquartered in Geneva. * ISO Standards are in all industries. ISO and quality blossomed in the WW II effort. Global Pressure forced the U. S. into TQM Without standards, the goods we buy would probably be unsafe and incompatible. Quality is not FREE, but it is good. Quality and ISO 9000 are most likely here to stay.