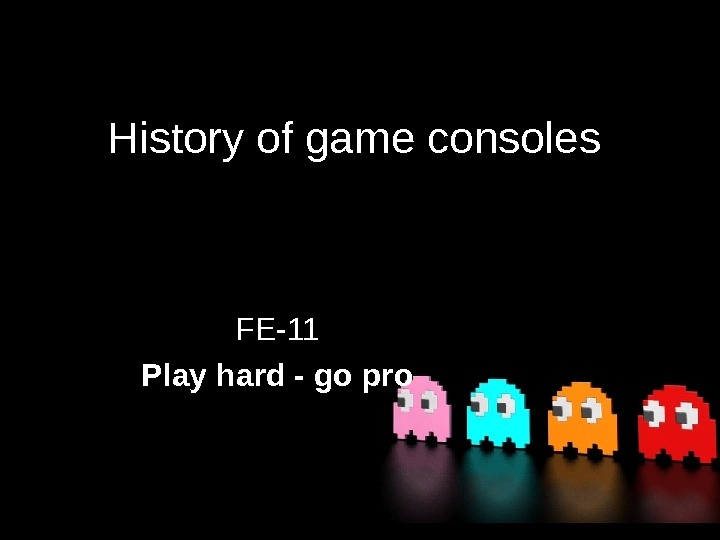 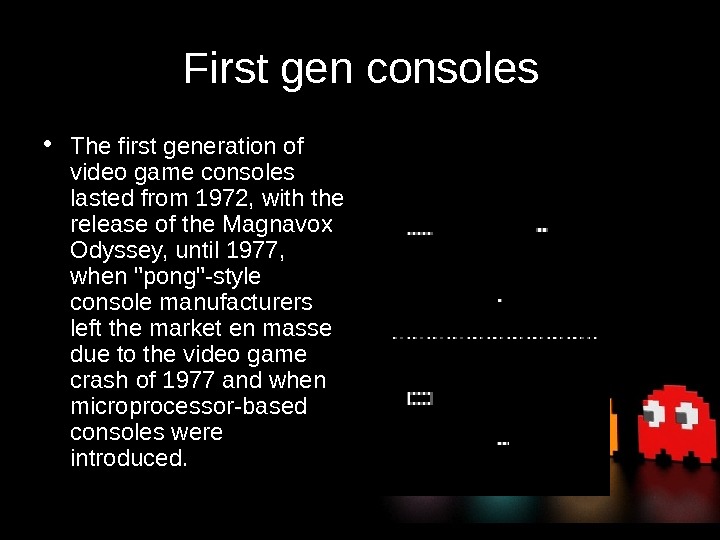 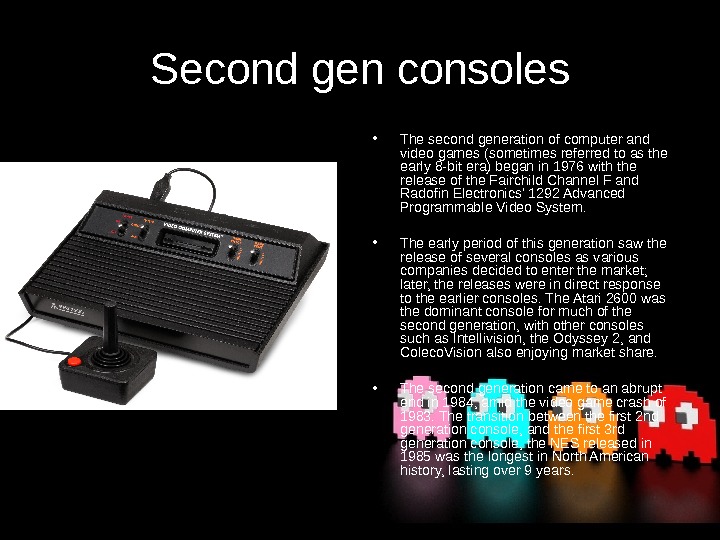 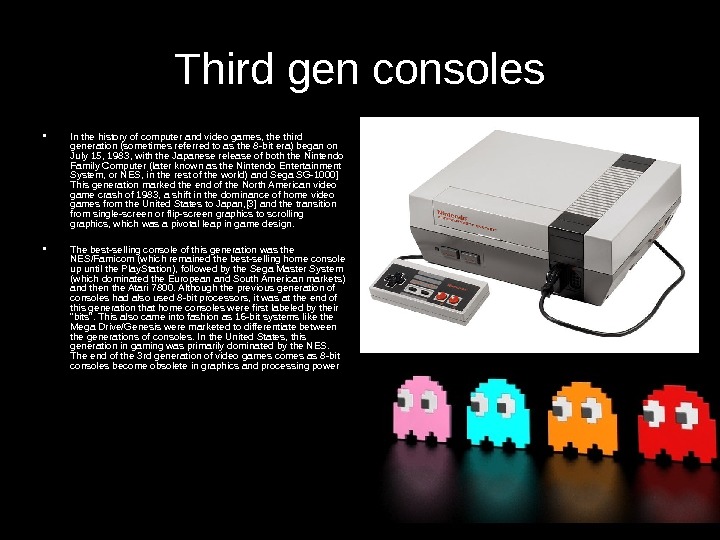 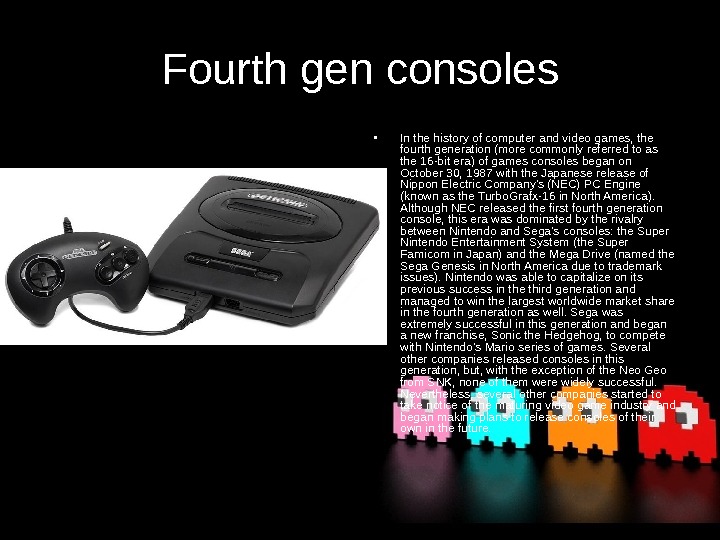 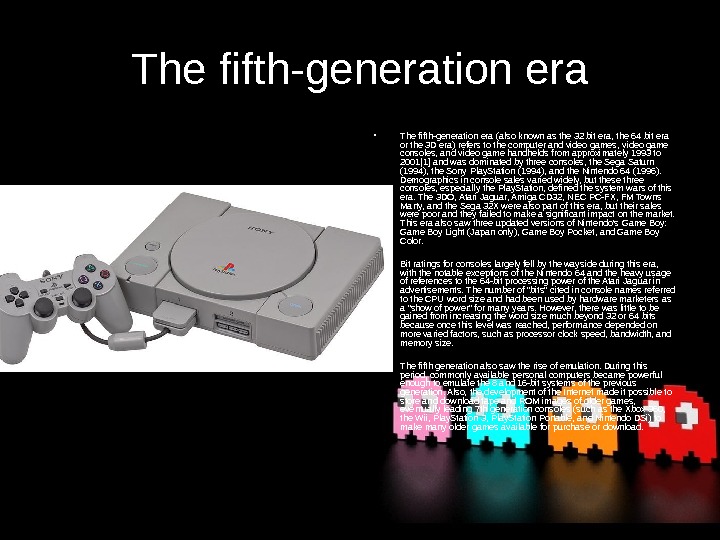 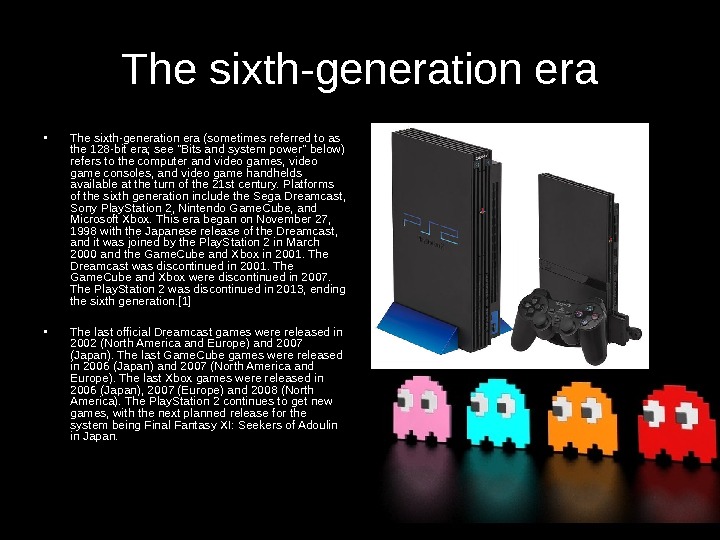 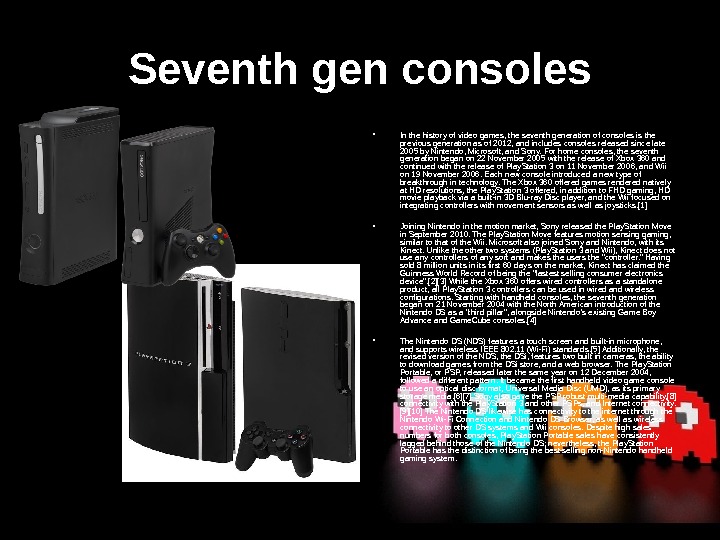 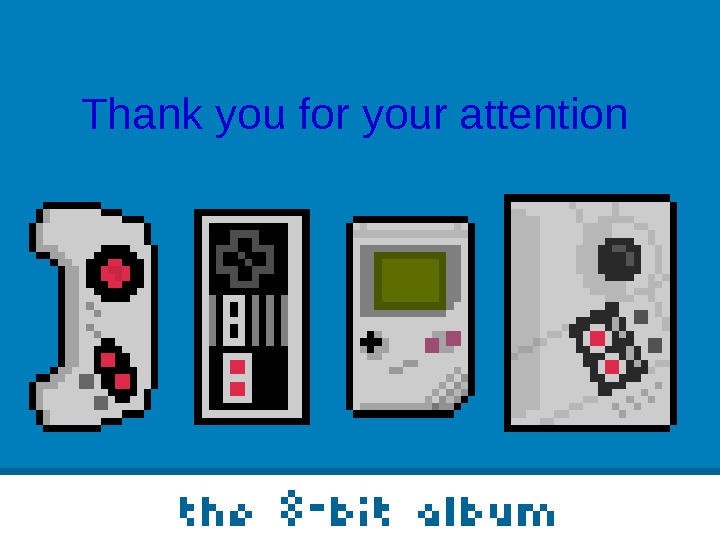 First gen consoles • The first generation of video game consoles lasted from 1972, with the release of the Magnavox Odyssey, until 1977, when «pong»-style console manufacturers left the market en masse due to the video game crash of 1977 and when microprocessor-based consoles were introduced.

Second gen consoles • The second generation of computer and video games (sometimes referred to as the early 8 -bit era) began in 1976 with the release of the Fairchild Channel F and Radofin Electronics’ 1292 Advanced Programmable Video System. • The early period of this generation saw the release of several consoles as various companies decided to enter the market; later, the releases were in direct response to the earlier consoles. The Atari 2600 was the dominant console for much of the second generation, with other consoles such as Intellivision, the Odyssey 2, and Coleco. Vision also enjoying market share. • The second generation came to an abrupt end in 1984, amid the video game crash of 1983. The transition between the first 2 nd generation console, and the first 3 rd generation console, the NES released in 1985 was the longest in North American history, lasting over 9 years.

Third gen consoles • In the history of computer and video games, the third generation (sometimes referred to as the 8 -bit era) began on July 15, 1983, with the Japanese release of both the Nintendo Family Computer (later known as the Nintendo Entertainment System, or NES, in the rest of the world) and Sega SG-1000] This generation marked the end of the North American video game crash of 1983, a shift in the dominance of home video games from the United States to Japan, [3] and the transition from single-screen or flip-screen graphics to scrolling graphics, which was a pivotal leap in game design. • The best-selling console of this generation was the NES/Famicom (which remained the best-selling home console up until the Play. Station), followed by the Sega Master System (which dominated the European and South American markets) and then the Atari 7800. Although the previous generation of consoles had also used 8 -bit processors, it was at the end of this generation that home consoles were first labeled by their «bits». This also came into fashion as 16 -bit systems like the Mega Drive/Genesis were marketed to differentiate between the generations of consoles. In the United States, this generation in gaming was primarily dominated by the NES. The end of the 3 rd generation of video games comes as 8 -bit consoles become obsolete in graphics and processing power compared to 16 -bit consoles.

Fourth gen consoles • In the history of computer and video games, the fourth generation (more commonly referred to as the 16 -bit era) of games consoles began on October 30, 1987 with the Japanese release of Nippon Electric Company’s (NEC) PC Engine (known as the Turbo. Grafx-16 in North America). Although NEC released the first fourth generation console, this era was dominated by the rivalry between Nintendo and Sega’s consoles: the Super Nintendo Entertainment System (the Super Famicom in Japan) and the Mega Drive (named the Sega Genesis in North America due to trademark issues). Nintendo was able to capitalize on its previous success in the third generation and managed to win the largest worldwide market share in the fourth generation as well. Sega was extremely successful in this generation and began a new franchise, Sonic the Hedgehog, to compete with Nintendo’s Mario series of games. Several other companies released consoles in this generation, but, with the exception of the Neo Geo from SNK, none of them were widely successful. Nevertheless, several other companies started to take notice of the maturing video game industry and began making plans to release consoles of their own in the future.

The fifth-generation era • The fifth-generation era (also known as the 32 bit era, the 64 bit era or the 3 D era) refers to the computer and video games, video game consoles, and video game handhelds from approximately 1993 to 2001[1] and was dominated by three consoles, the Sega Saturn (1994), the Sony Play. Station (1994), and the Nintendo 64 (1996). Demographics in console sales varied widely, but these three consoles, especially the Play. Station, defined the system wars of this era. The 3 DO, Atari Jaguar, Amiga CD 32, NEC PC-FX, FM Towns Marty, and the Sega 32 X were also part of this era, but their sales were poor and they failed to make a significant impact on the market. This era also saw three updated versions of Nintendo’s Game Boy: Game Boy Light (Japan only), Game Boy Pocket, and Game Boy Color. • Bit ratings for consoles largely fell by the wayside during this era, with the notable exceptions of the Nintendo 64 and the heavy usage of references to the 64 -bit processing power of the Atari Jaguar in advertisements. The number of «bits» cited in console names referred to the CPU word size and had been used by hardware marketers as a «show of power» for many years. However, there was little to be gained from increasing the word size much beyond 32 or 64 bits because once this level was reached, performance depended on more varied factors, such as processor clock speed, bandwidth, and memory size. • The fifth generation also saw the rise of emulation. During this period, commonly available personal computers became powerful enough to emulate the 8 and 16 -bit systems of the previous generation. Also, the development of the Internet made it possible to store and download tape and ROM images of older games, eventually leading 7 th generation consoles (such as the Xbox 360, the Wii, Play. Station 3, Play. Station Portable, and Nintendo DSi) to make many older games available for purchase or download.

The sixth-generation era • The sixth-generation era (sometimes referred to as the 128 -bit era; see «Bits and system power» below) refers to the computer and video games, video game consoles, and video game handhelds available at the turn of the 21 st century. Platforms of the sixth generation include the Sega Dreamcast, Sony Play. Station 2, Nintendo Game. Cube, and Microsoft Xbox. This era began on November 27, 1998 with the Japanese release of the Dreamcast, and it was joined by the Play. Station 2 in March 2000 and the Game. Cube and Xbox in 2001. The Dreamcast was discontinued in 2001. The Game. Cube and Xbox were discontinued in 2007. The Play. Station 2 was discontinued in 2013, ending the sixth generation. [1] • The last official Dreamcast games were released in 2002 (North America and Europe) and 2007 (Japan). The last Game. Cube games were released in 2006 (Japan) and 2007 (North America and Europe). The last Xbox games were released in 2006 (Japan), 2007 (Europe) and 2008 (North America). The Play. Station 2 continues to get new games, with the next planned release for the system being Final Fantasy XI: Seekers of Adoulin in Japan.

Seventh gen consoles • In the history of video games, the seventh generation of consoles is the previous generation as of 2012, and includes consoles released since late 2005 by Nintendo, Microsoft, and Sony. For home consoles, the seventh generation began on 22 November 2005 with the release of Xbox 360 and continued with the release of Play. Station 3 on 11 November 2006, and Wii on 19 November 2006. Each new console introduced a new type of breakthrough in technology. The Xbox 360 offered games rendered natively at HD resolutions, the Play. Station 3 offered, in addition to FHD gaming, HD movie playback via a built-in 3 D Blu-ray Disc player, and the Wii focused on integrating controllers with movement sensors as well as joysticks. [1] • Joining Nintendo in the motion market, Sony released the Play. Station Move in September 2010. The Play. Station Move features motion sensing gaming, similar to that of the Wii. Microsoft also joined Sony and Nintendo, with its Kinect. Unlike the other two systems (Play. Station 3 and Wii), Kinect does not use any controllers of any sort and makes the users the «controller. » Having sold 8 million units in its first 60 days on the market, Kinect has claimed the Guinness World Record of being the «fastest selling consumer electronics device». [2][3] While the Xbox 360 offers wired controllers as a standalone product, all Play. Station 3 controllers can be used in wired and wireless configurations. Starting with handheld consoles, the seventh generation began on 21 November 2004 with the North American introduction of the Nintendo DS as a «third pillar», alongside Nintendo’s existing Game Boy Advance and Game. Cube consoles. [4] • The Nintendo DS (NDS) features a touch screen and built-in microphone, and supports wireless IEEE 802. 11 (Wi-Fi) standards. [5] Additionally, the revised version of the NDS, the DSi, features two built in cameras, the ability to download games from the DSi store, and a web browser. The Play. Station Portable, or PSP, released later the same year on 12 December 2004, followed a different pattern. It became the first handheld video game console to use an optical disc format, Universal Media Disc (UMD), as its primary storage media. [6][7] Sony also gave the PSP robust multi-media capability, [8] connectivity with the Play. Station 3 and other PSPs, and Internet connectivity. [9][10] The Nintendo DS likewise has connectivity to the internet through the Nintendo Wi-Fi Connection and Nintendo DS Browser, as well as wireless connectivity to other DS systems and Wii consoles. Despite high sales numbers for both consoles, Play. Station Portable sales have consistently lagged behind those of the Nintendo DS; nevertheless, the Play. Station Portable has the distinction of being the best-selling non-Nintendo handheld gaming system.