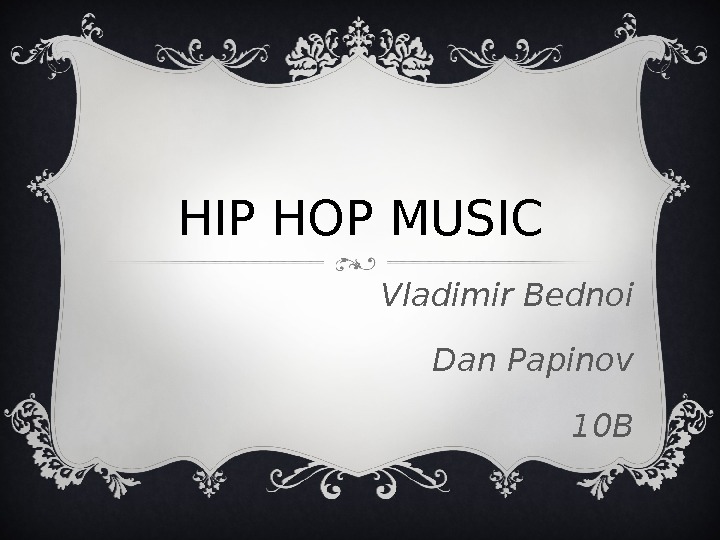 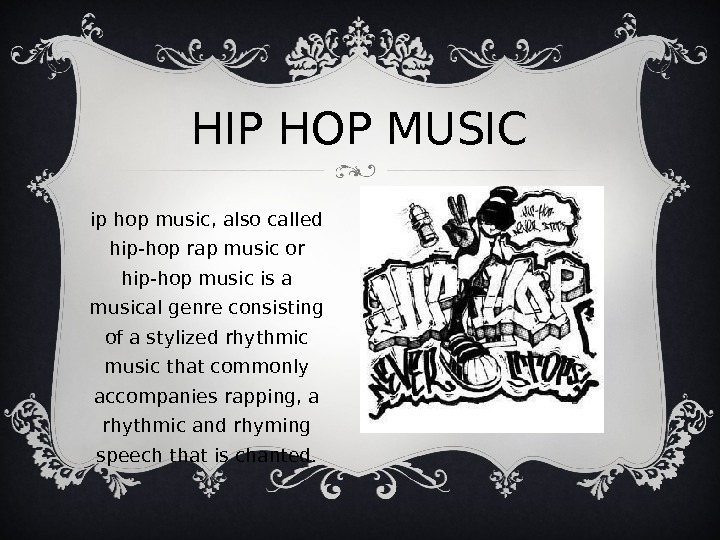 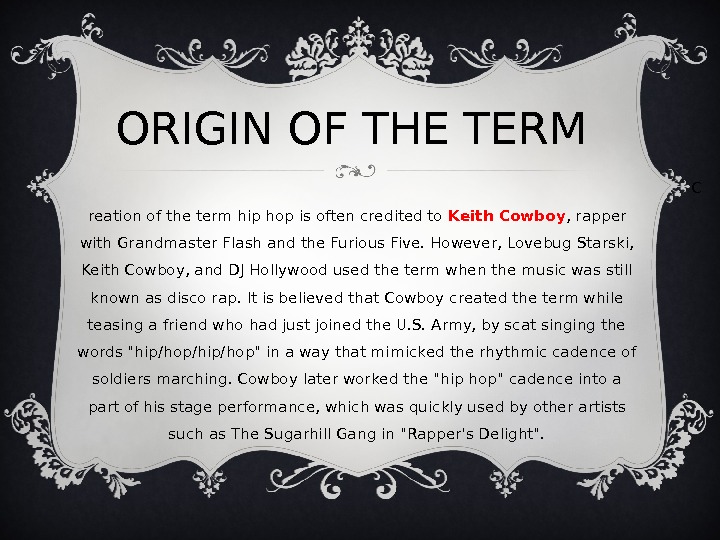 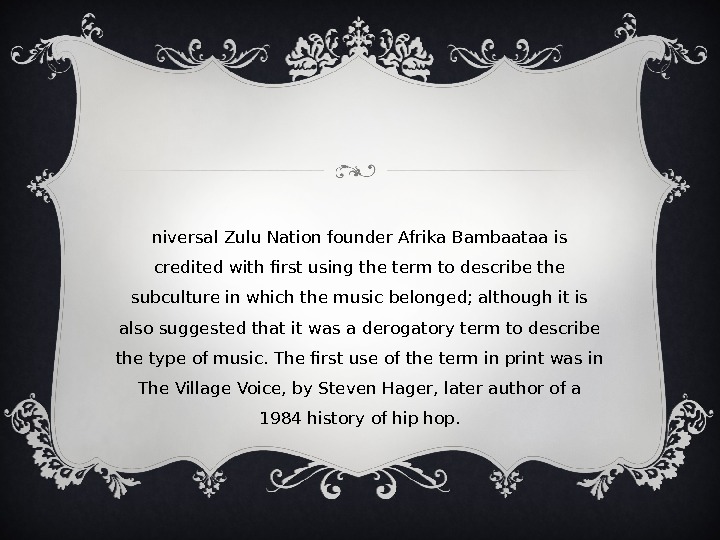 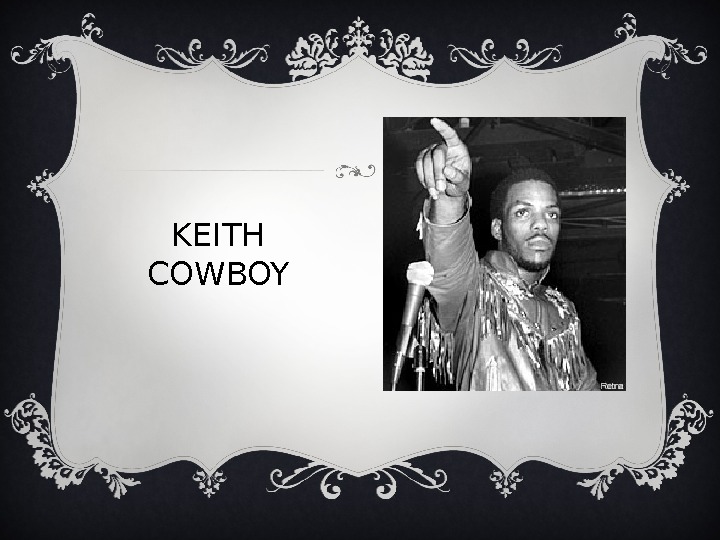 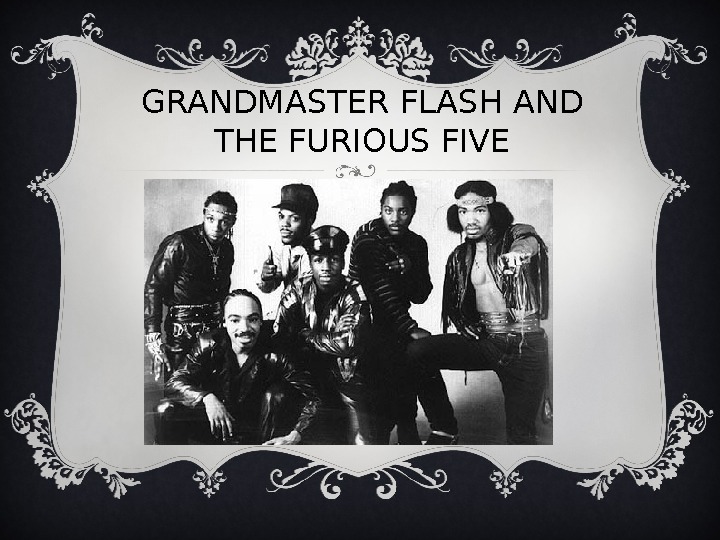 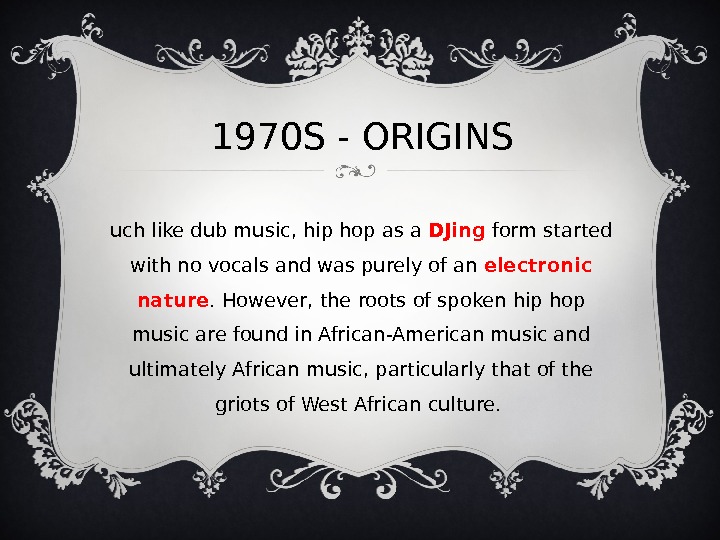 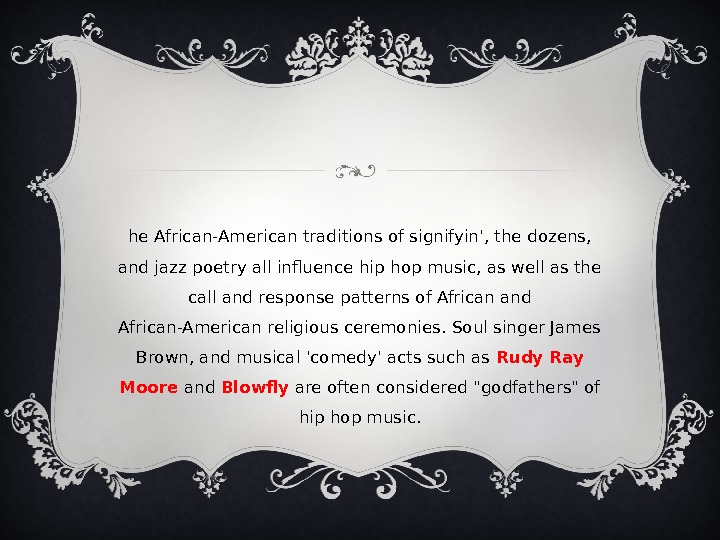 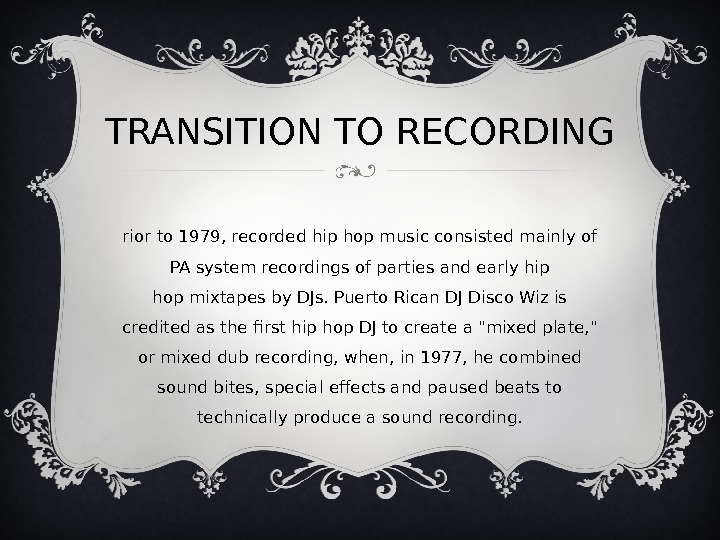 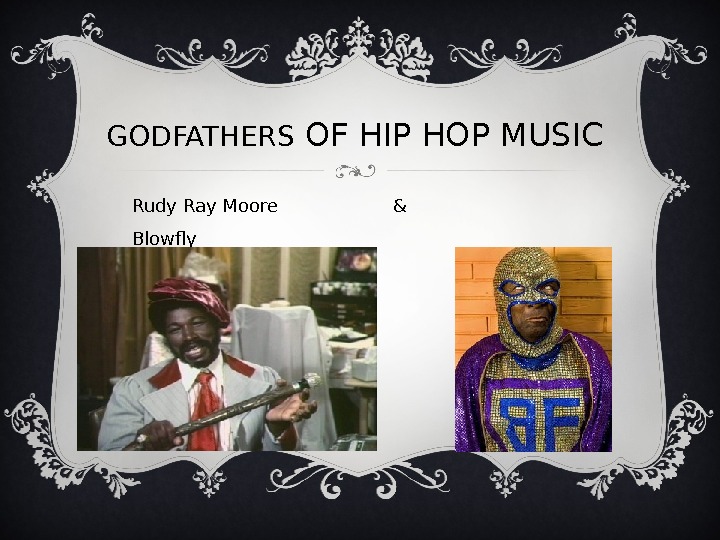 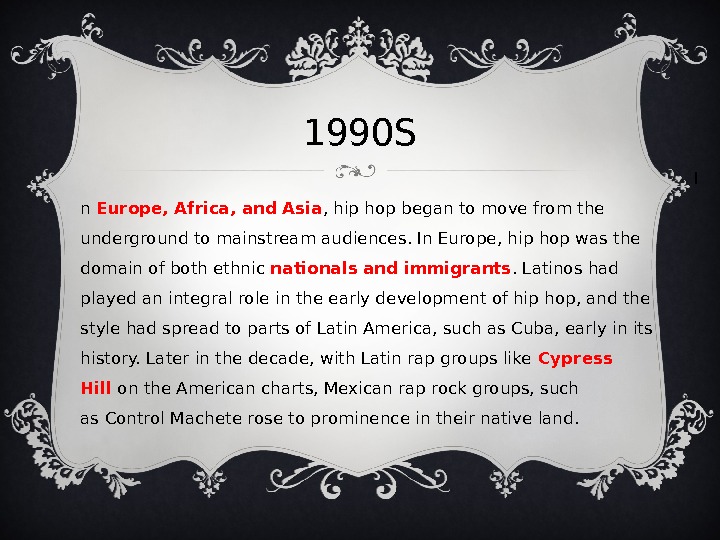 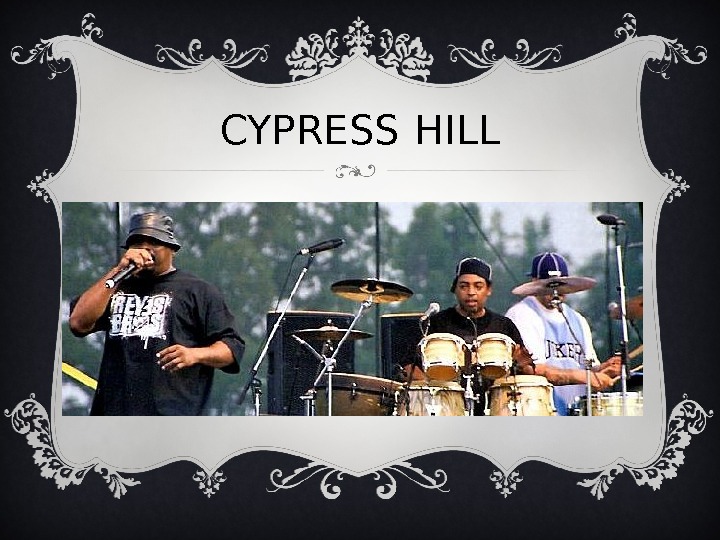 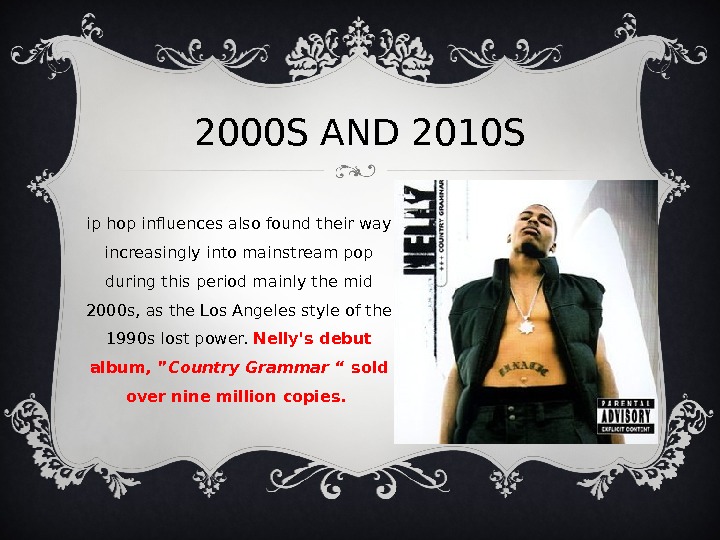 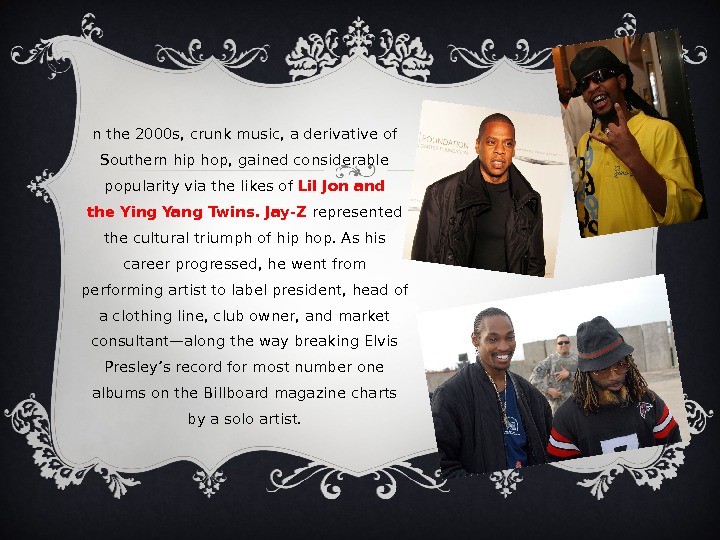 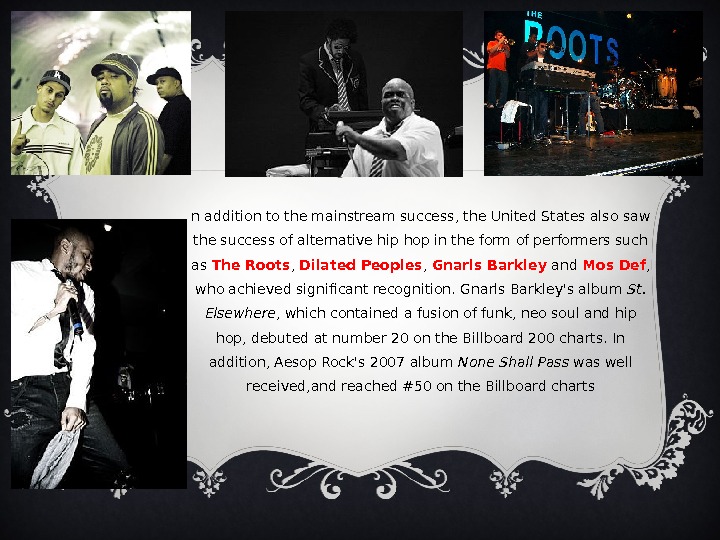 ORIGIN OF THE TERM C reation of the term hip hop is often credited to Keith Cowboy , rapper with Grandmaster Flash and the Furious Five. However, Lovebug Starski, Keith Cowboy, and DJ Hollywood used the term when the music was still known as disco rap. It is believed that Cowboy created the term while teasing a friend who had just joined the U. S. Army, by scat singing the words «hip/hop/hip/hop» in a way that mimicked the rhythmic cadence of soldiers marching. Cowboy later worked the «hip hop» cadence into a part of his stage performance, which was quickly used by other artists such as The Sugarhill Gang in «Rapper’s Delight».

U niversal Zulu Nation founder Afrika Bambaataa is credited with first using the term to describe the subculture in which the music belonged; although it is also suggested that it was a derogatory term to describe the type of music. The first use of the term in print was in The Village Voice, by Steven Hager, later author of a 1984 history of hip hop.

GRANDMASTER FLASH AND THE FURIOUS FIV

1970 S — ORIGINS M uch like dub music, hip hop as a DJing form started with no vocals and was purely of an electronic nature. However, the roots of spoken hip hop music are found in African-American music and ultimately African music, particularly that of the griots of West African culture.

T he African-American traditions of signifyin’, the dozens, and jazz poetry all influence hip hop music, as well as the call and response patterns of African and African-American religious ceremonies. Soul singer James Brown, and musical ‘comedy’ acts such as Rudy Ray Moore and Blowfly are often considered «godfathers» of hip hop music.

1990 S I n Europe, Africa, and Asia , hip hop began to move from the underground to mainstream audiences. In Europe, hip hop was the domain of both ethnic nationals and immigrants. Latinos had played an integral role in the early development of hip hop, and the style had spread to parts of Latin America, such as Cuba, early in its history. Later in the decade, with Latin rap groups like Cypress Hill on the American charts, Mexican rap rock groups, such as. Control Machete rose to prominence in their native land.

I n the 2000 s, crunk music, a derivative of Southern hip hop, gained considerable popularity via the likes of Lil Jonand the. Ying Yang Twins. Jay-Z represented the cultural triumph of hip hop. As his career progressed, he went from performing artist to label president, head of a clothing line, club owner, and market consultant—along the way breaking Elvis Presley’s record for most number one albums on the Billboard magazine charts by a solo artist.

I n addition to the mainstream success, the United States also saw the success ofalternative hip hopin the form of performers such as The Roots , Dilated Peoples , Gnarls Barkley and Mos Def , who achieved significant recognition. Gnarls Barkley’s album St. Elsewhere , which contained a fusion of funk, neo soul and hip hop, debuted at number 20 on the Billboard 200 charts. In addition, Aesop Rock’s 2007 album None Shall Pass was well received, and reached #50 on the Billboard charts