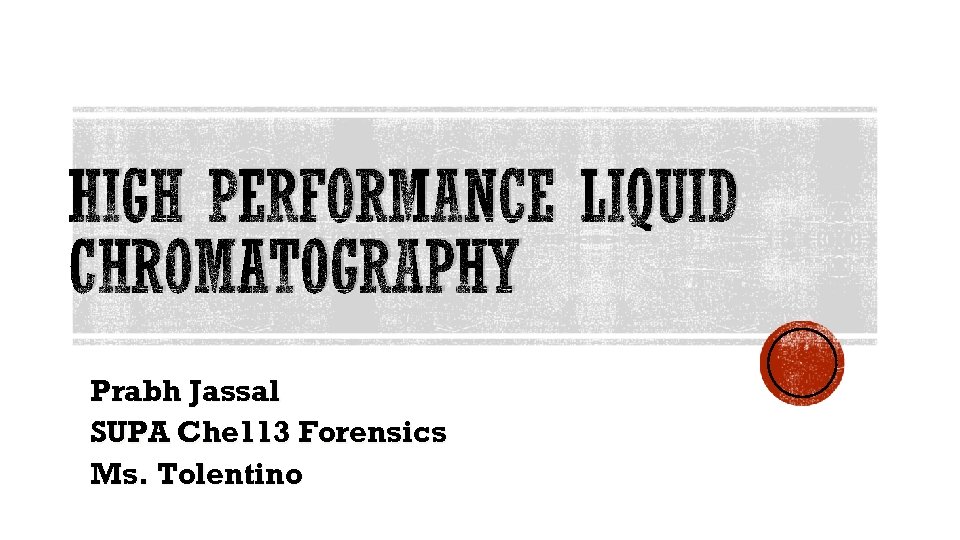 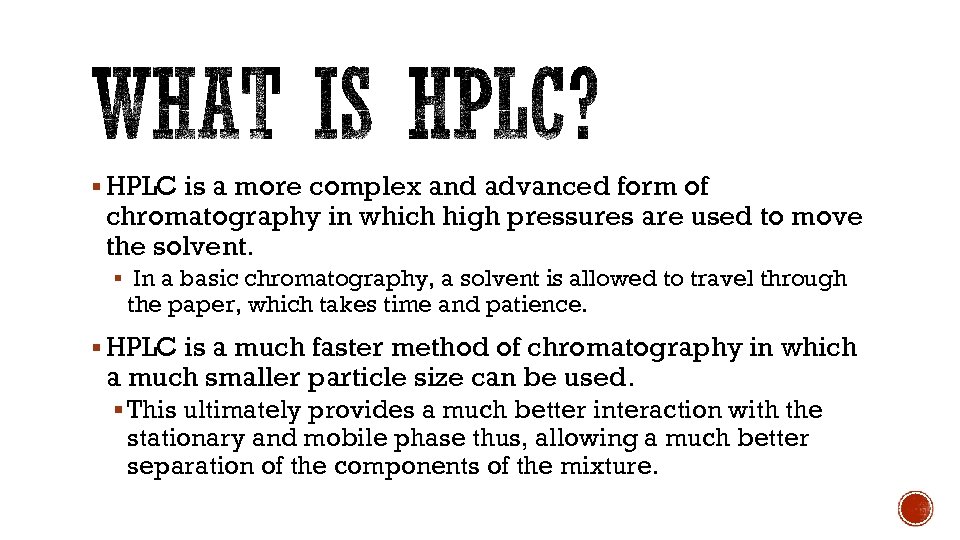 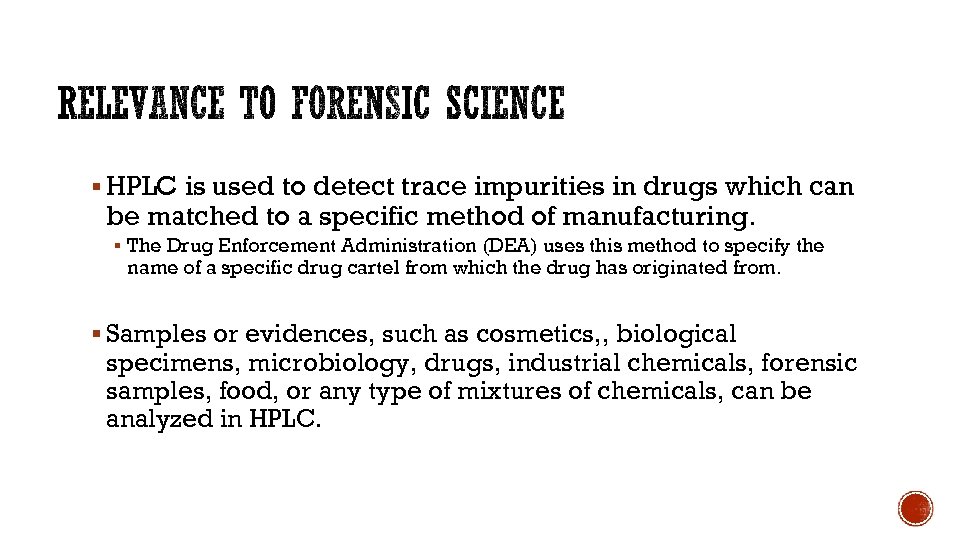 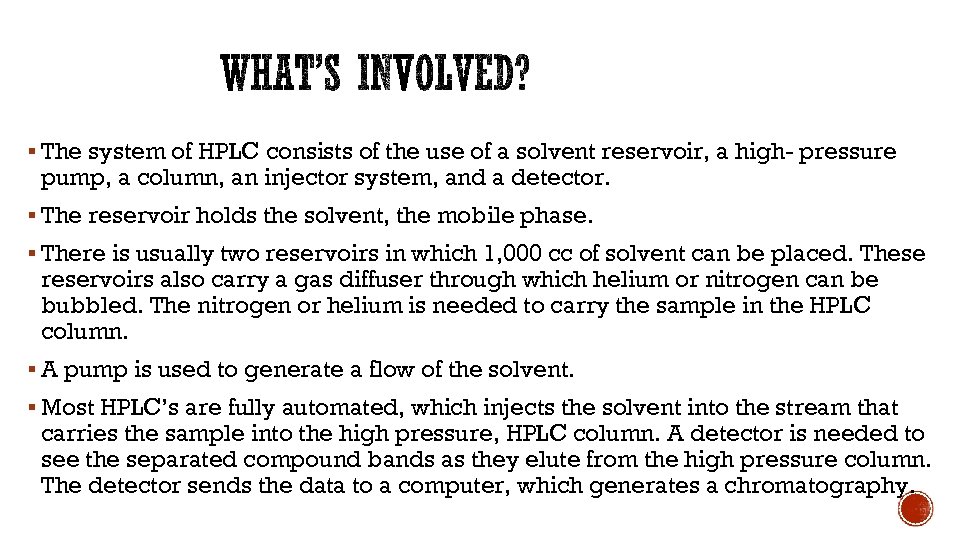 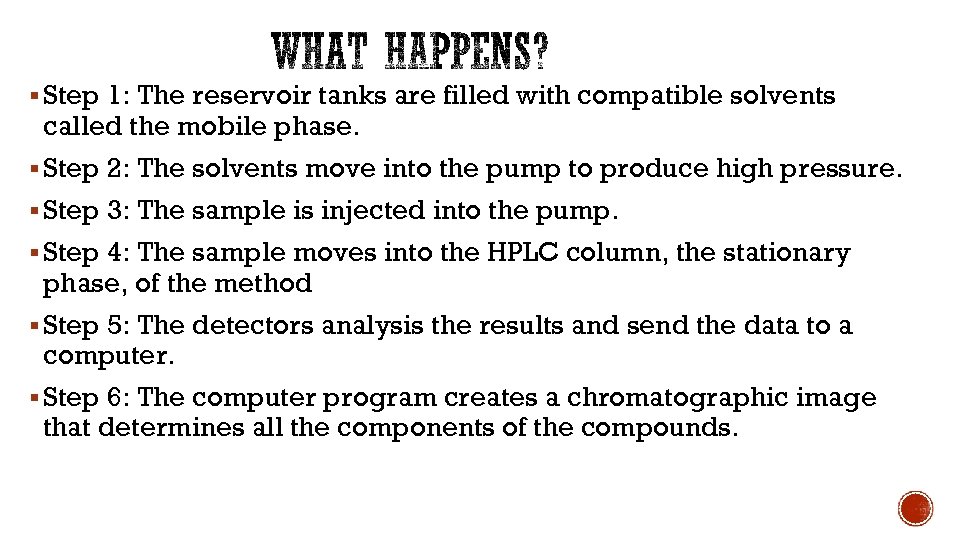 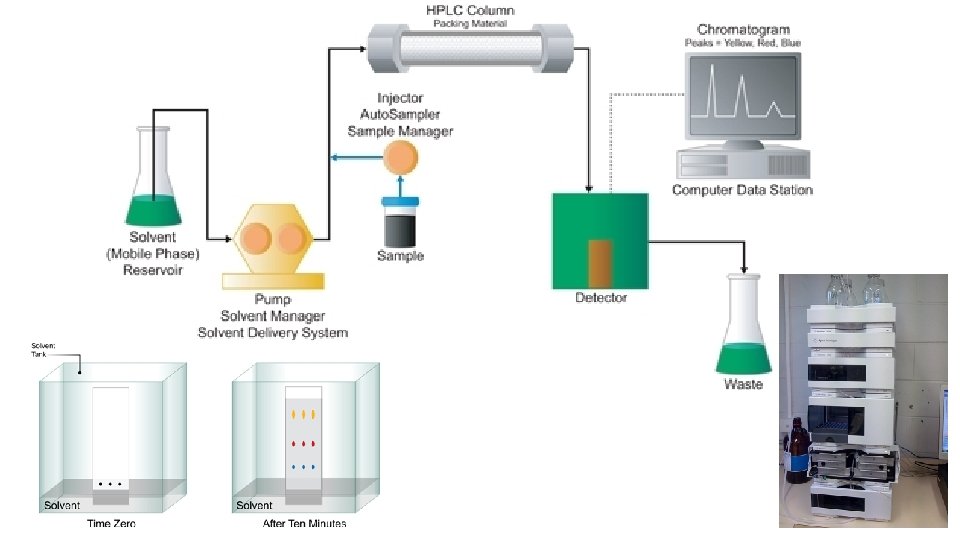 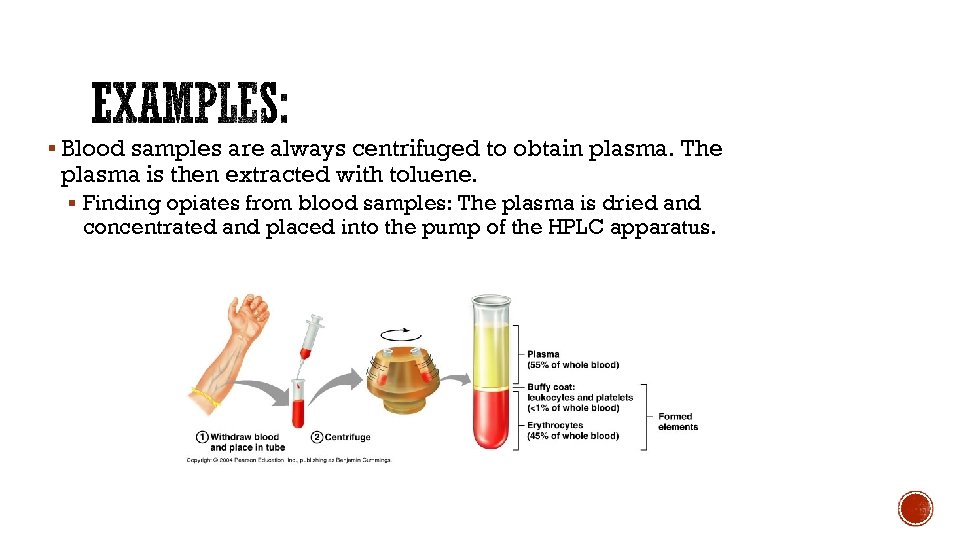 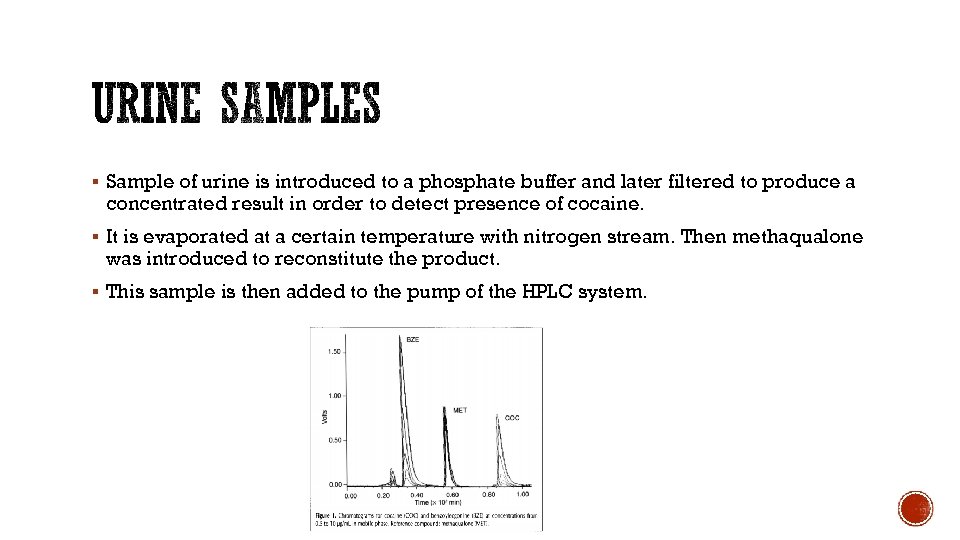 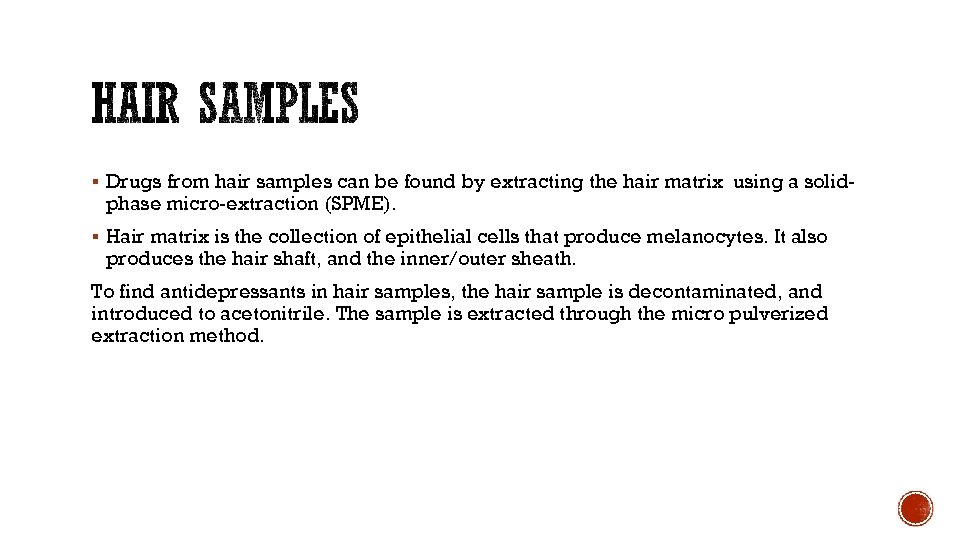 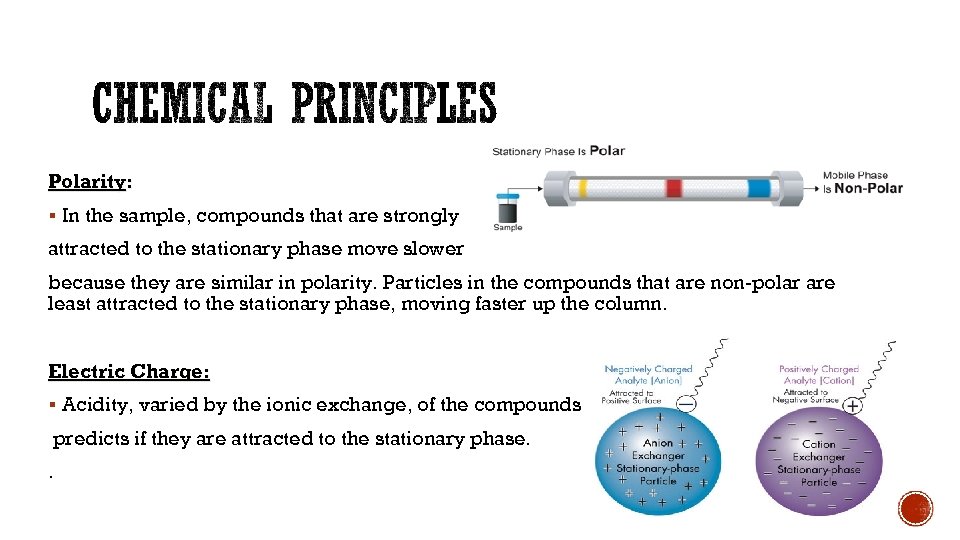 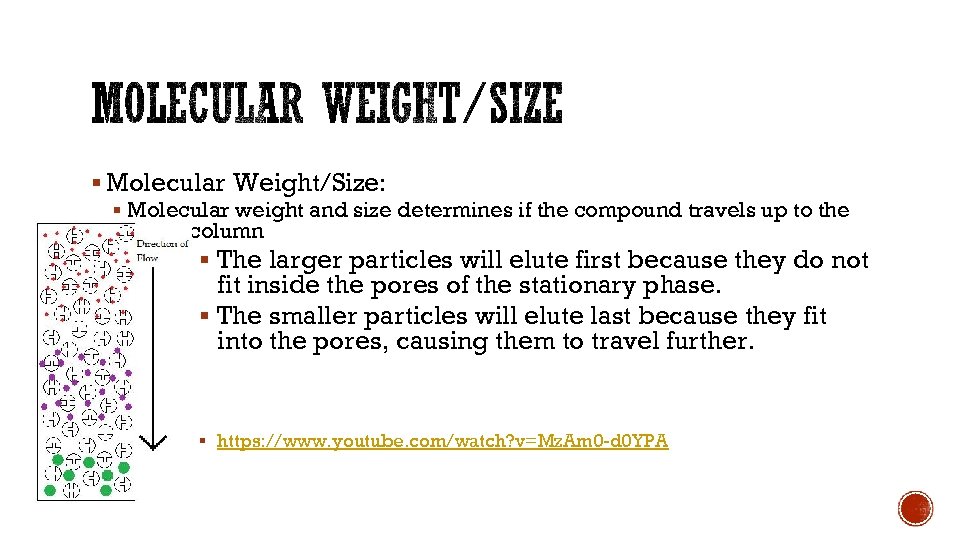 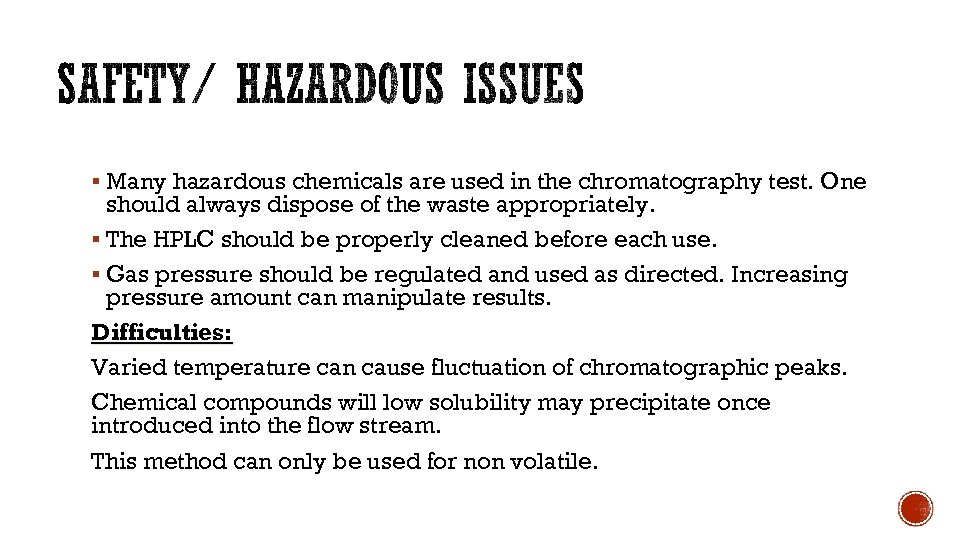 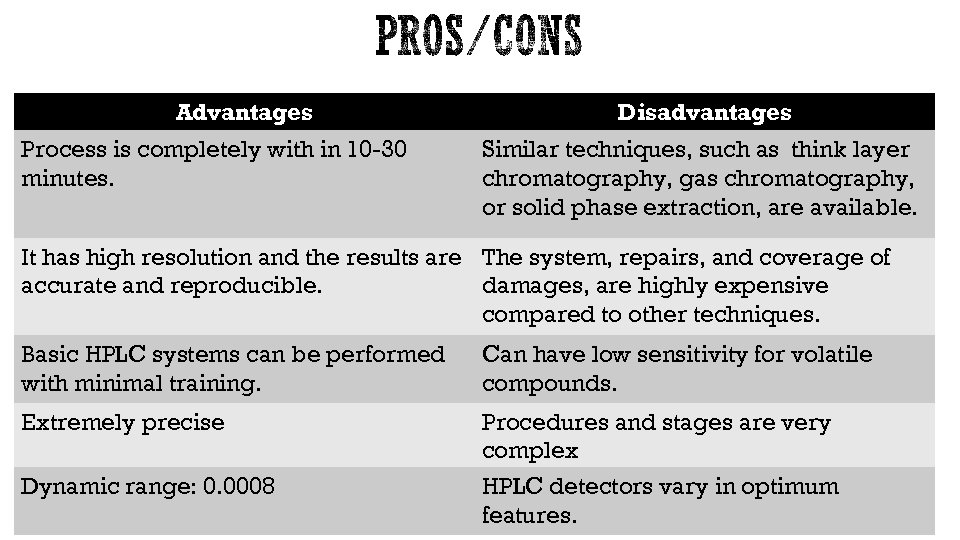 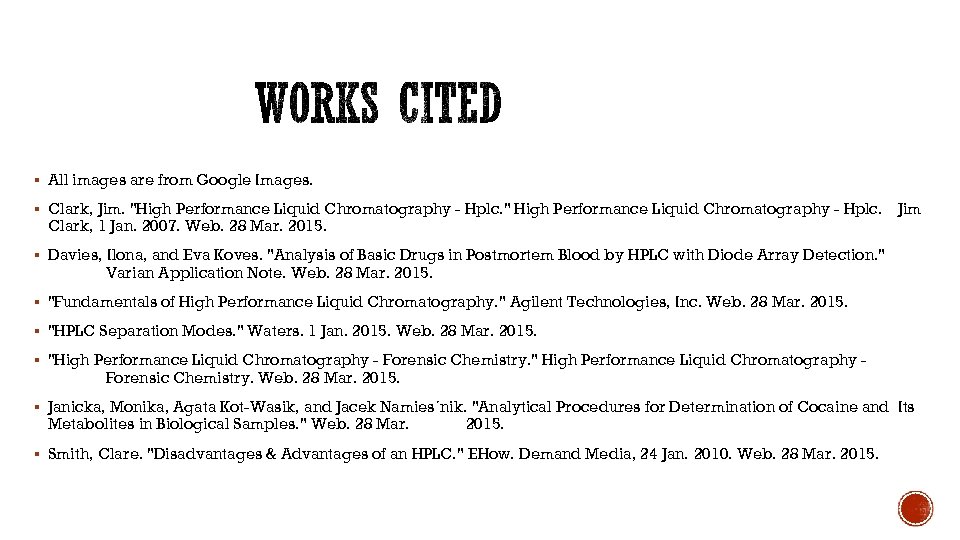 § HPLC is used to detect trace impurities in drugs which can be matched to a specific method of manufacturing. § The Drug Enforcement Administration (DEA) uses this method to specify the name of a specific drug cartel from which the drug has originated from. § Samples or evidences, such as cosmetics, , biological specimens, microbiology, drugs, industrial chemicals, forensic samples, food, or any type of mixtures of chemicals, can be analyzed in HPLC.

§ The system of HPLC consists of the use of a solvent reservoir, a high- pressure pump, a column, an injector system, and a detector. § The reservoir holds the solvent, the mobile phase. § There is usually two reservoirs in which 1, 000 cc of solvent can be placed. These reservoirs also carry a gas diffuser through which helium or nitrogen can be bubbled. The nitrogen or helium is needed to carry the sample in the HPLC column. § A pump is used to generate a flow of the solvent. § Most HPLC’s are fully automated, which injects the solvent into the stream that carries the sample into the high pressure, HPLC column. A detector is needed to see the separated compound bands as they elute from the high pressure column. The detector sends the data to a computer, which generates a chromatography.

§ Step 1: The reservoir tanks are filled with compatible solvents called the mobile phase. § Step 2: The solvents move into the pump to produce high pressure. § Step 3: The sample is injected into the pump. § Step 4: The sample moves into the HPLC column, the stationary phase, of the method § Step 5: The detectors analysis the results and send the data to a computer. § Step 6: The computer program creates a chromatographic image that determines all the components of the compounds.

§ Blood samples are always centrifuged to obtain plasma. The plasma is then extracted with toluene. § Finding opiates from blood samples: The plasma is dried and concentrated and placed into the pump of the HPLC apparatus.

§ Sample of urine is introduced to a phosphate buffer and later filtered to produce a concentrated result in order to detect presence of cocaine. § It is evaporated at a certain temperature with nitrogen stream. Then methaqualone was introduced to reconstitute the product. § This sample is then added to the pump of the HPLC system.

§ Drugs from hair samples can be found by extracting the hair matrix using a solid- phase micro-extraction (SPME). § Hair matrix is the collection of epithelial cells that produce melanocytes. It also produces the hair shaft, and the inner/outer sheath. To find antidepressants in hair samples, the hair sample is decontaminated, and introduced to acetonitrile. The sample is extracted through the micro pulverized extraction method.

§ Molecular Weight/Size: § Molecular weight and size determines if the compound travels up to the HPLC column § The larger particles will elute first because they do not fit inside the pores of the stationary phase. § The smaller particles will elute last because they fit into the pores, causing them to travel further. § https: //www. youtube. com/watch? v=Mz. Am 0 -d 0 YPA

§ Many hazardous chemicals are used in the chromatography test. One should always dispose of the waste appropriately. § The HPLC should be properly cleaned before each use. § Gas pressure should be regulated and used as directed. Increasing pressure amount can manipulate results. Difficulties: Varied temperature can cause fluctuation of chromatographic peaks. Chemical compounds will low solubility may precipitate once introduced into the flow stream. This method can only be used for non volatile.

Advantages Process is completely with in 10 -30 minutes. Disadvantages Similar techniques, such as think layer chromatography, gas chromatography, or solid phase extraction, are available. It has high resolution and the results are The system, repairs, and coverage of accurate and reproducible. damages, are highly expensive compared to other techniques. Basic HPLC systems can be performed with minimal training. Can have low sensitivity for volatile compounds. Extremely precise Procedures and stages are very complex HPLC detectors vary in optimum features. Dynamic range: 0. 0008