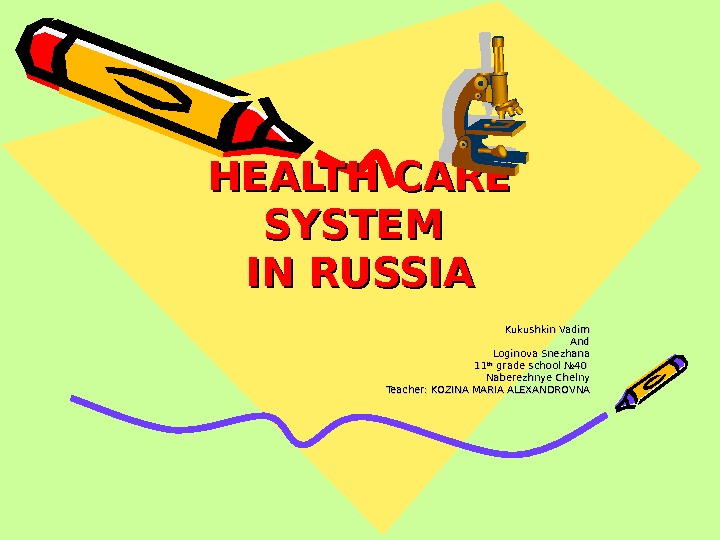 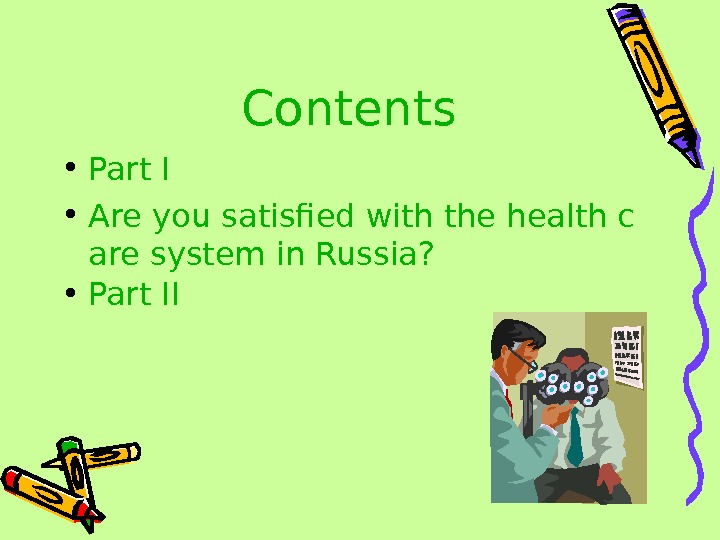 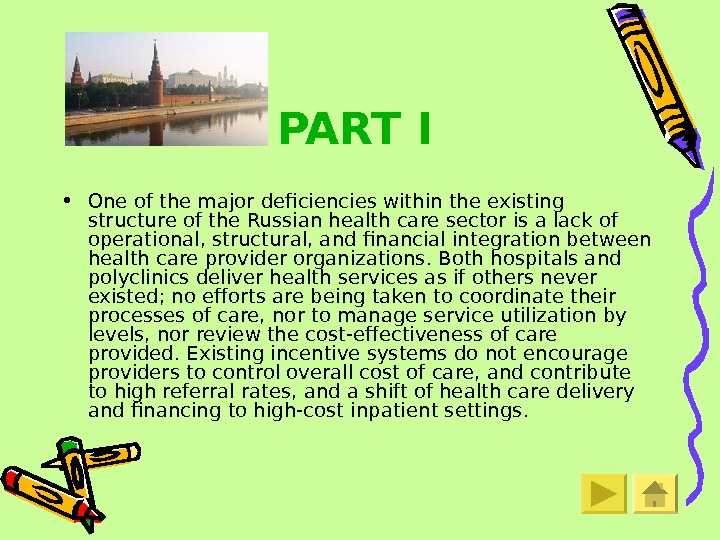 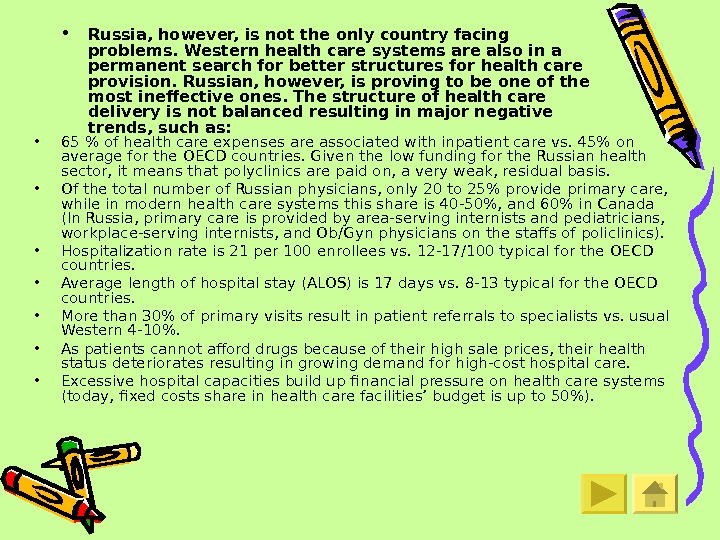 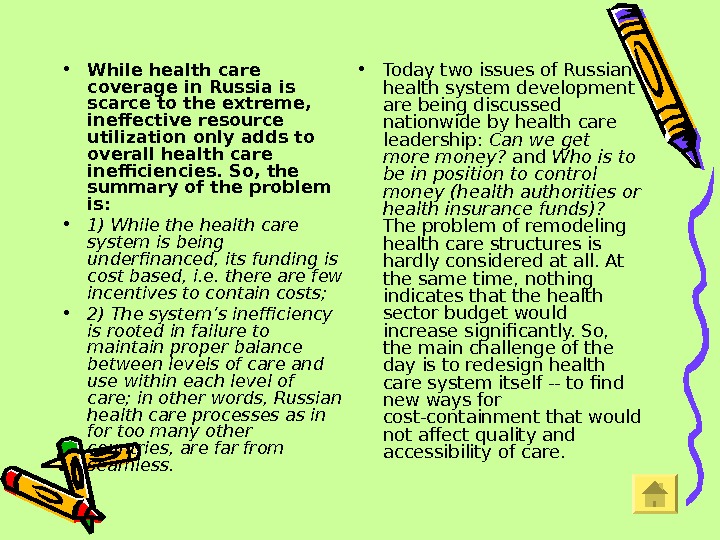 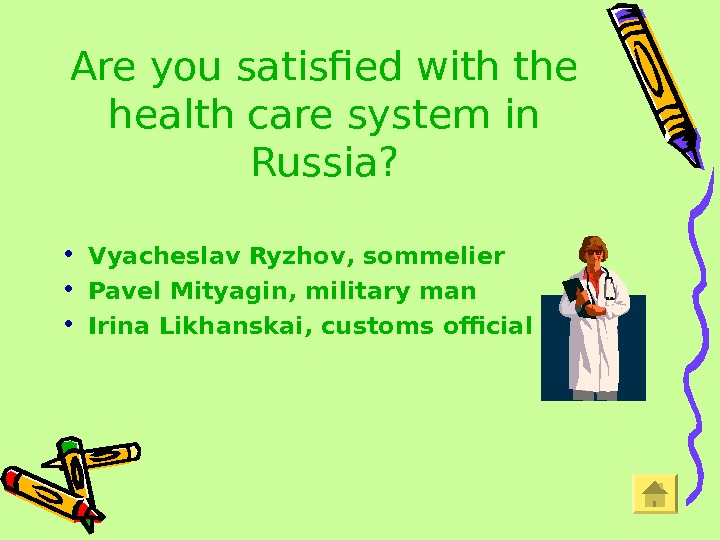 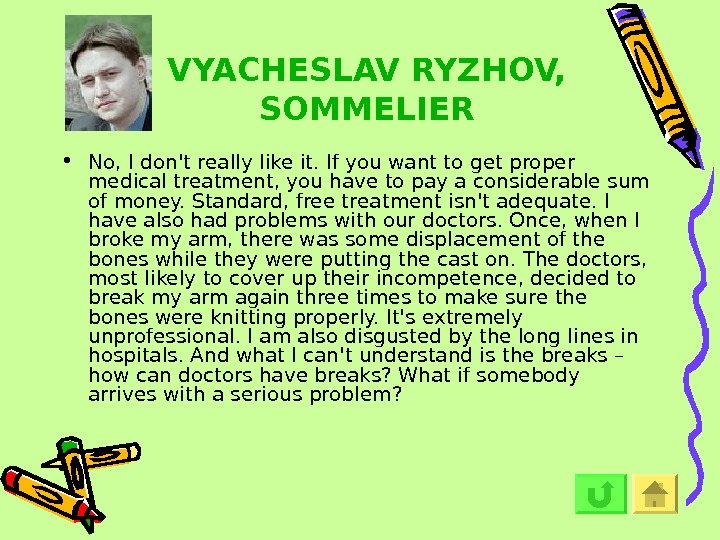 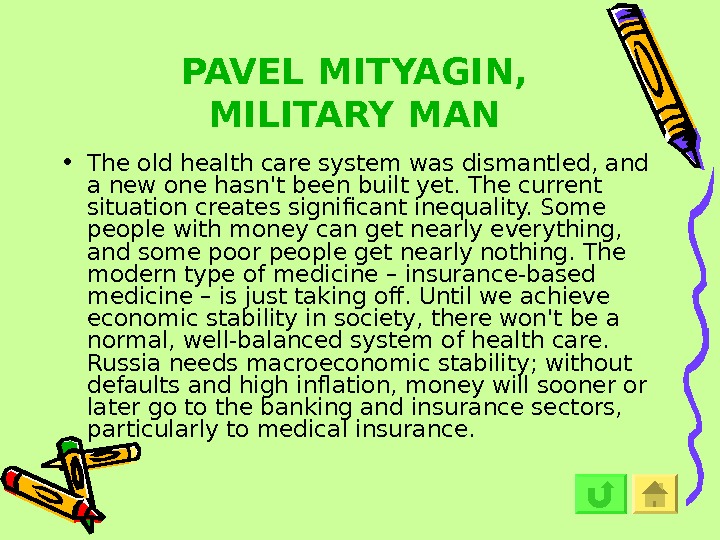 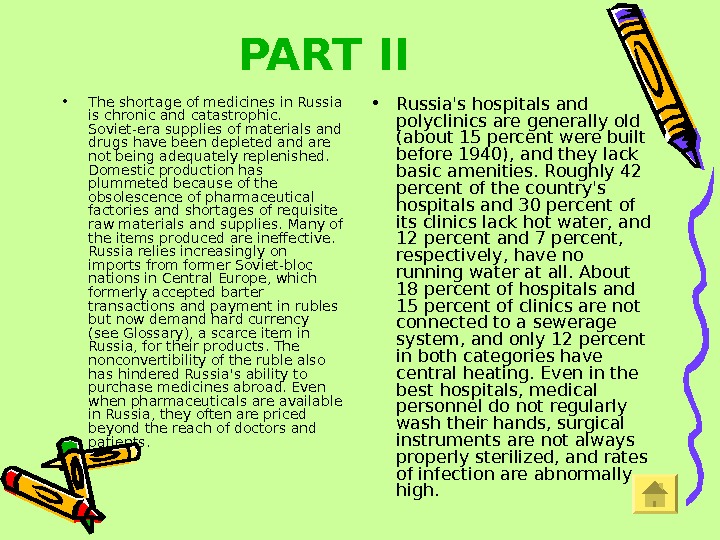 Contents • Part I • Are you satisfied with the health c are system in Russia? • Part II

PART I • One of the major deficiencies within the existing structure of the Russian health care sector is a lack of operational, structural, and financial integration between health care provider organizations. Both hospitals and polyclinics deliver health services as if others never existed; no efforts are being taken to coordinate their processes of care, nor to manage service utilization by levels, nor review the cost-effectiveness of care provided. Existing incentive systems do not encourage providers to control overall cost of care, and contribute to high referral rates, and a shift of health care delivery and financing to high-cost inpatient settings.

• Russia, however, is not the only country facing problems. Western health care systems are also in a permanent search for better structures for health care provision. Russian, however, is proving to be one of the most ineffective ones. The structure of health care delivery is not balanced resulting in major negative trends, such as: • 65 % of health care expenses are associated with inpatient care vs. 45% on average for the OECD countries. Given the low funding for the Russian health sector, it means that polyclinics are paid on, a very weak, residual basis. • Of the total number of Russian physicians, only 20 to 25% provide primary care, while in modern health care systems this share is 40 -50%, and 60% in Canada (In Russia, primary care is provided by area-serving internists and pediatricians, workplace-serving internists, and Ob/Gyn physicians on the staffs of policlinics). • Hospitalization rate is 21 per 100 enrollees vs. 12 -17/100 typical for the OECD countries. • Average length of hospital stay (ALOS) is 17 days vs. 8 -13 typical for the OECD countries. • More than 30% of primary visits result in patient referrals to specialists vs. usual Western 4 -10%. • As patients cannot afford drugs because of their high sale prices, their health status deteriorates resulting in growing demand for high-cost hospital care. • Excessive hospital capacities build up financial pressure on health care systems (today, fixed costs share in health care facilities’ budget is up to 50%).

• While health care coverage in Russia is scarce to the extreme, ineffective resource utilization only adds to overall health care inefficiencies. So, the summary of the problem is: • 1) While the health care system is being underfinanced, its funding is cost based, i. e. there are few incentives to contain costs; • 2) The system’s inefficiency is rooted in failure to maintain proper balance between levels of care and use within each level of care; in other words, Russian health care processes as in for too many other countries, are far from seamless. • Today two issues of Russian health system development are being discussed nationwide by health care leadership: Can we get more money? and Who is to be in position to control money (health authorities or health insurance funds)? The problem of remodeling health care structures is hardly considered at all. At the same time, nothing indicates that the health sector budget would increase significantly. So, the main challenge of the day is to redesign health care system itself — to find new ways for cost-containment that would not affect quality and accessibility of care.

VYACHESLAV RYZHOV, SOMMELIER • No, I don’t really like it. If you want to get proper medical treatment, you have to pay a considerable sum of money. Standard, free treatment isn’t adequate. I have also had problems with our doctors. Once, when I broke my arm, there was some displacement of the bones while they were putting the cast on. The doctors, most likely to cover up their incompetence, decided to break my arm again three times to make sure the bones were knitting properly. It’s extremely unprofessional. I am also disgusted by the long lines in hospitals. And what I can’t understand is the breaks – how can doctors have breaks? What if somebody arrives with a serious problem?

PAVEL MITYAGIN, MILITARY MAN • The old health care system was dismantled, and a new one hasn’t been built yet. The current situation creates significant inequality. Some people with money can get nearly everything, and some poor people get nearly nothing. The modern type of medicine – insurance-based medicine – is just taking off. Until we achieve economic stability in society, there won’t be a normal, well-balanced system of health care. Russia needs macroeconomic stability; without defaults and high inflation, money will sooner or later go to the banking and insurance sectors, particularly to medical insurance.

IRINA LIKHANSKAI, CUSTOMS OFFICIAL • I’m not satisfied with the quality of medical services in Russia. Sometimes neither state-run nor private hospitals provide adequate treatment. Some doctors lack professional skills, and in medicine professionalism is essential. Sometimes there are long waiting periods for certain surgical procedures. One of my acquaintances was on a waiting list for free surgery. But, unfortunately, someone with money obtained the right to be hospitalized before him, and my friend died while waiting for the surgery. I’m for equal treatment of the wealthy and penniless.

PART II • The shortage of medicines in Russia is chronic and catastrophic. Soviet-era supplies of materials and drugs have been depleted and are not being adequately replenished. Domestic production has plummeted because of the obsolescence of pharmaceutical factories and shortages of requisite raw materials and supplies. Many of the items produced are ineffective. Russia relies increasingly on imports from former Soviet-bloc nations in Central Europe, which formerly accepted barter transactions and payment in rubles but now demand hard currency (see Glossary), a scarce item in Russia, for their products. The nonconvertibility of the ruble also has hindered Russia’s ability to purchase medicines abroad. Even when pharmaceuticals are available in Russia, they often are priced beyond the reach of doctors and patients. • Russia’s hospitals and polyclinics are generally old (about 15 percent were built before 1940), and they lack basic amenities. Roughly 42 percent of the country’s hospitals and 30 percent of its clinics lack hot water, and 12 percent and 7 percent, respectively, have no running water at all. About 18 percent of hospitals and 15 percent of clinics are not connected to a sewerage system, and only 12 percent in both categories have central heating. Even in the best hospitals, medical personnel do not regularly wash their hands, surgical instruments are not always properly sterilized, and rates of infection are abnormally high.