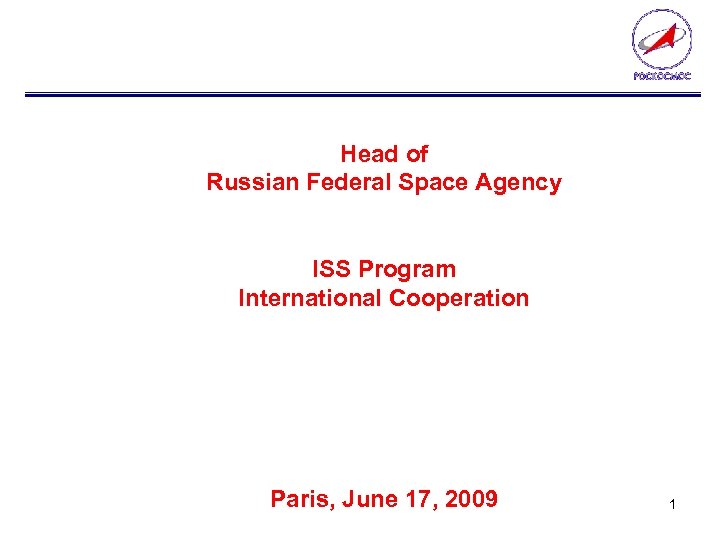 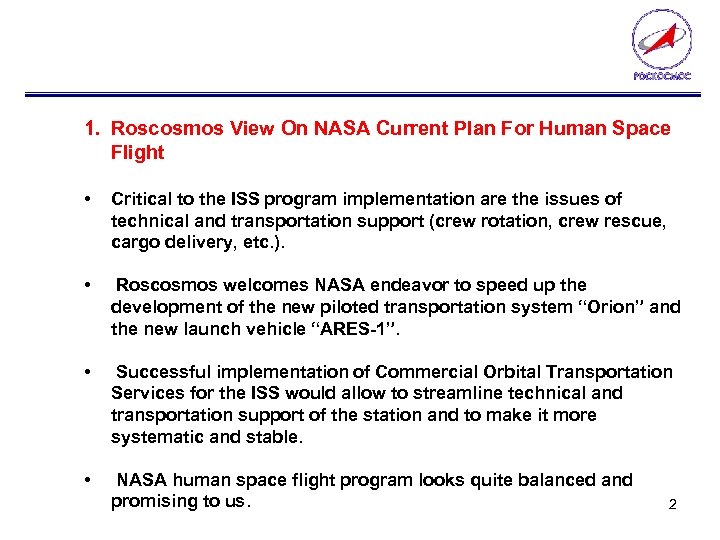 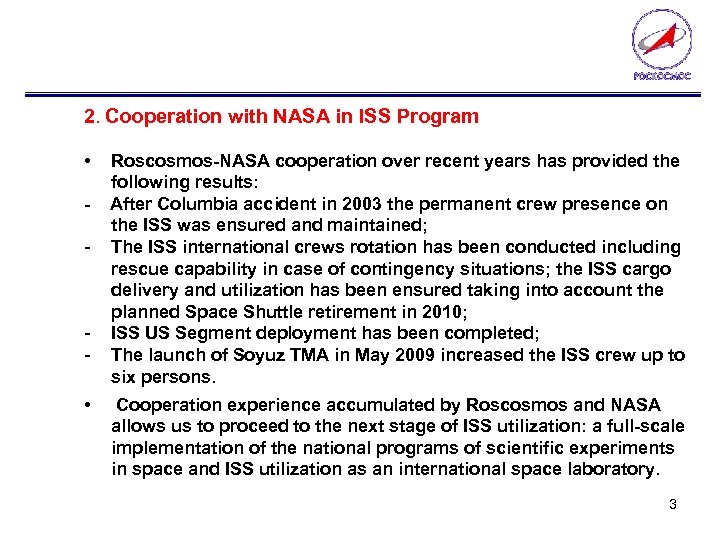 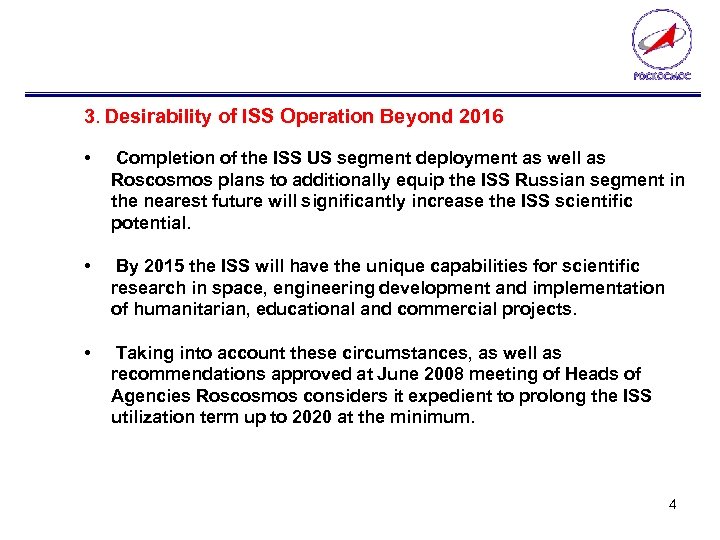 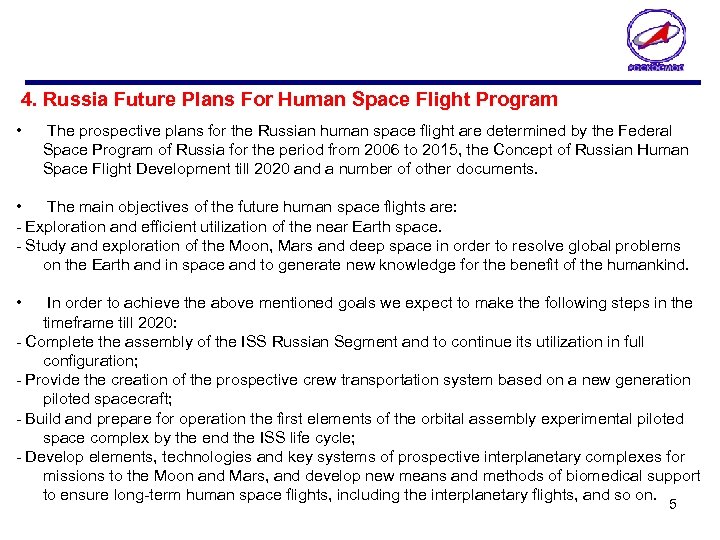 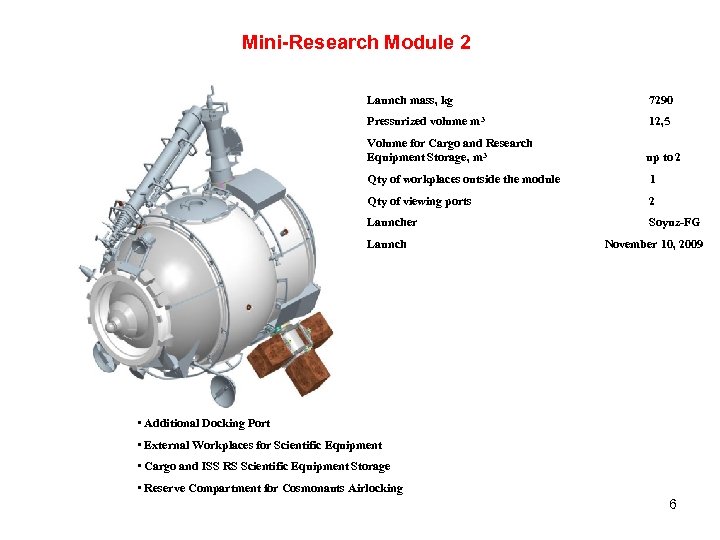 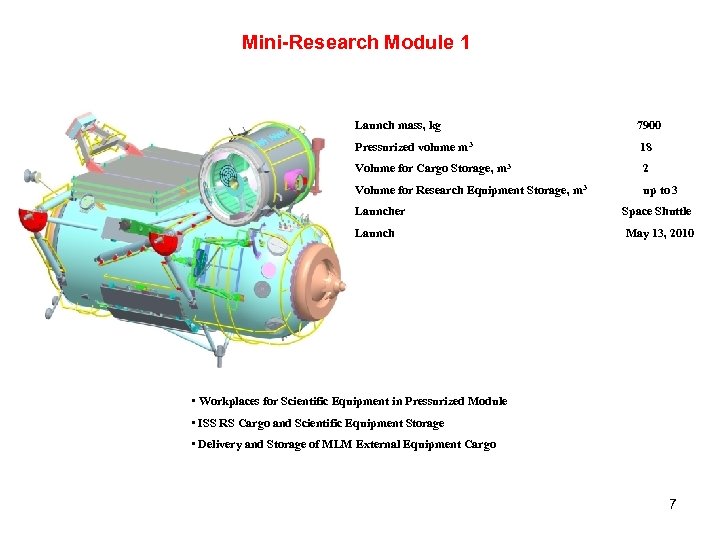 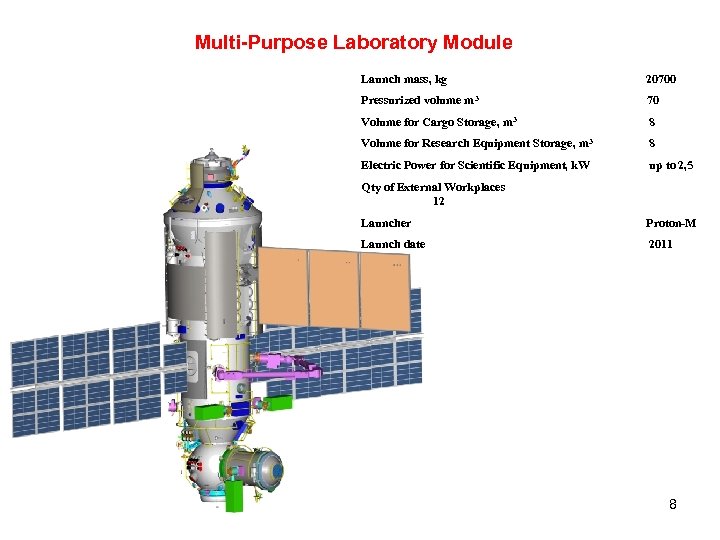 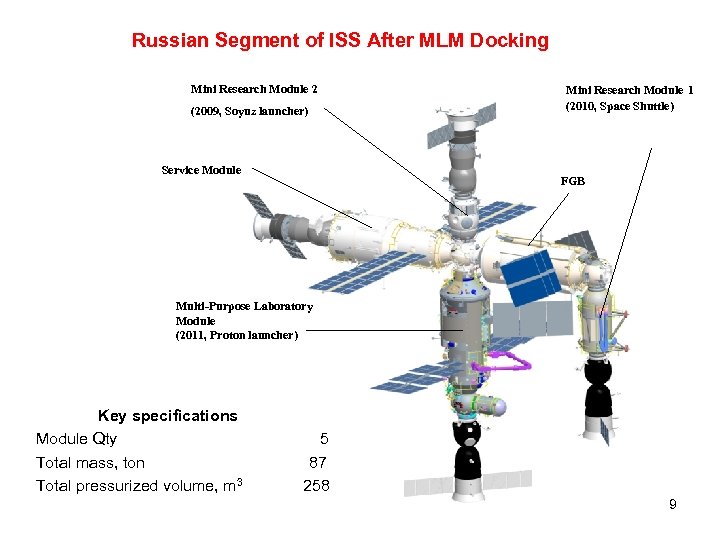 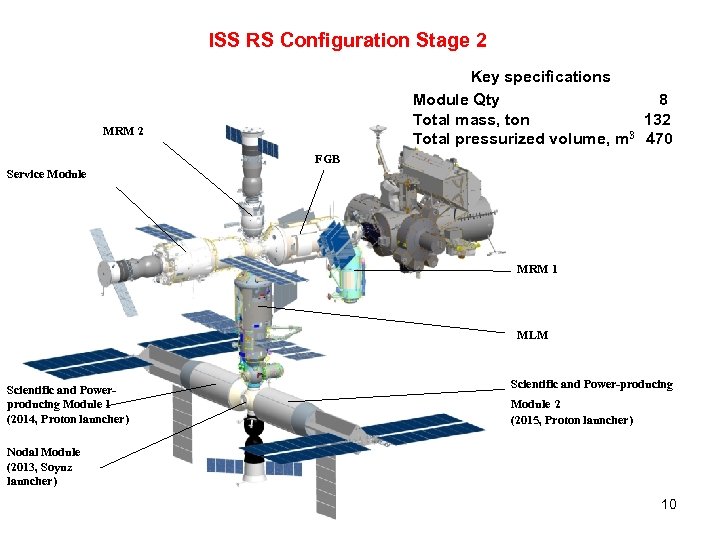 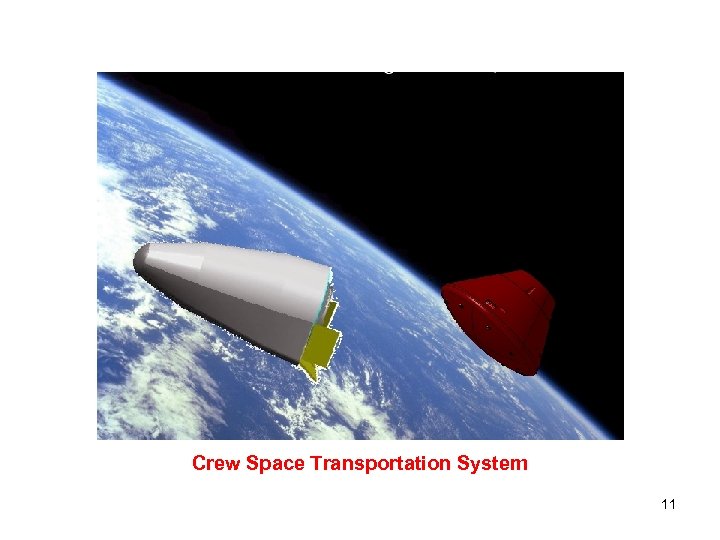 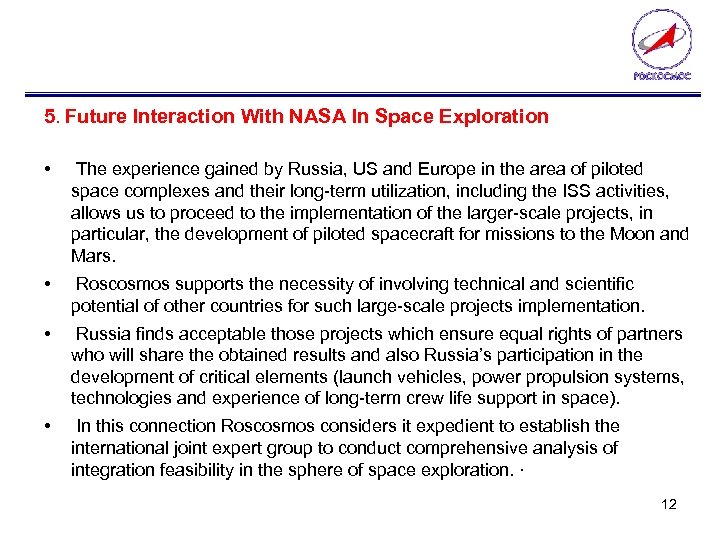 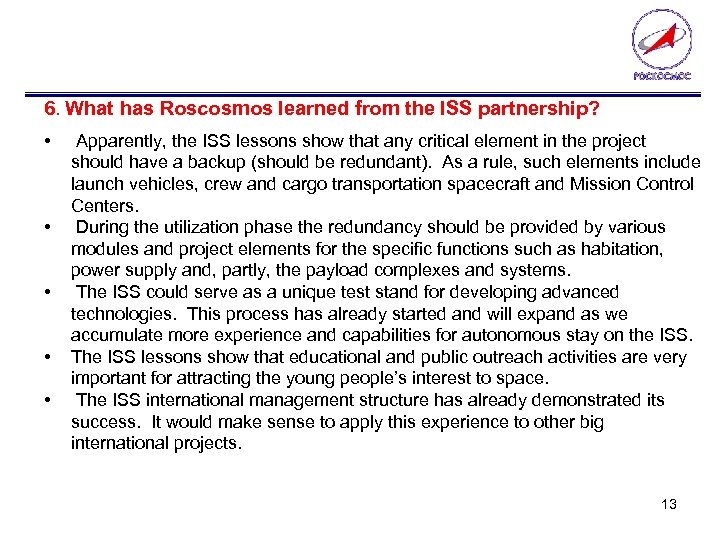 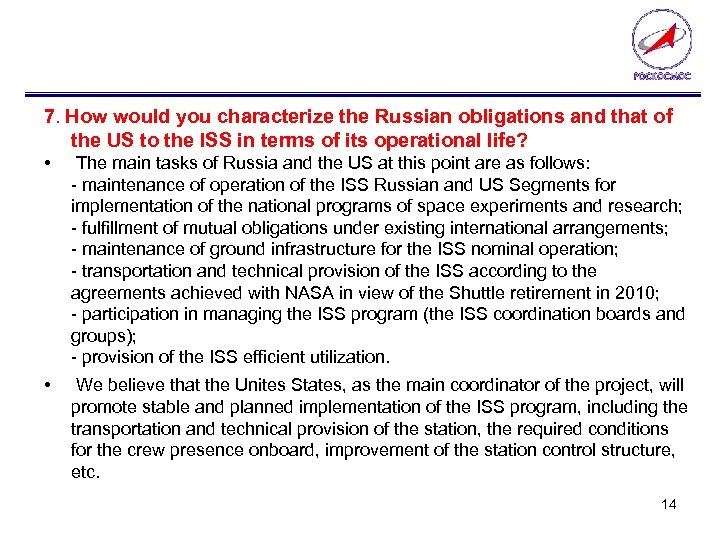 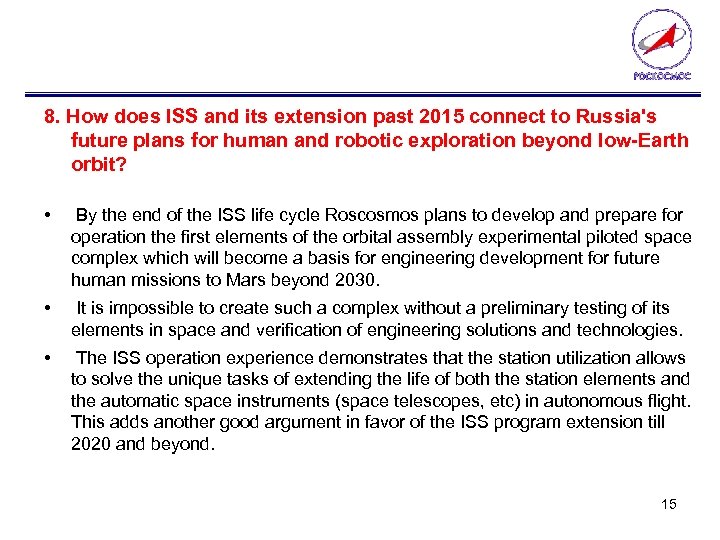 1. Roscosmos View On NASA Current Plan For Human Space Flight • Critical to the ISS program implementation are the issues of technical and transportation support (crew rotation, crew rescue, cargo delivery, etc. ). • Roscosmos welcomes NASA endeavor to speed up the development of the new piloted transportation system “Orion” and the new launch vehicle “ARES-1”. • Successful implementation of Commercial Orbital Transportation Services for the ISS would allow to streamline technical and transportation support of the station and to make it more systematic and stable. • NASA human space flight program looks quite balanced and promising to us. 2

2. Cooperation with NASA in ISS Program • - - • Roscosmos-NASA cooperation over recent years has provided the following results: After Columbia accident in 2003 the permanent crew presence on the ISS was ensured and maintained; The ISS international crews rotation has been conducted including rescue capability in case of contingency situations; the ISS cargo delivery and utilization has been ensured taking into account the planned Space Shuttle retirement in 2010; ISS US Segment deployment has been completed; The launch of Soyuz TMA in May 2009 increased the ISS crew up to six persons. Cooperation experience accumulated by Roscosmos and NASA allows us to proceed to the next stage of ISS utilization: a full-scale implementation of the national programs of scientific experiments in space and ISS utilization as an international space laboratory. 3

3. Desirability of ISS Operation Beyond 2016 • Completion of the ISS US segment deployment as well as Roscosmos plans to additionally equip the ISS Russian segment in the nearest future will significantly increase the ISS scientific potential. • By 2015 the ISS will have the unique capabilities for scientific research in space, engineering development and implementation of humanitarian, educational and commercial projects. • Taking into account these circumstances, as well as recommendations approved at June 2008 meeting of Heads of Agencies Roscosmos considers it expedient to prolong the ISS utilization term up to 2020 at the minimum. 4

4. Russia Future Plans For Human Space Flight Program • The prospective plans for the Russian human space flight are determined by the Federal Space Program of Russia for the period from 2006 to 2015, the Concept of Russian Human Space Flight Development till 2020 and a number of other documents. • The main objectives of the future human space flights are: - Exploration and efficient utilization of the near Earth space. - Study and exploration of the Moon, Mars and deep space in order to resolve global problems on the Earth and in space and to generate new knowledge for the benefit of the humankind. • In order to achieve the above mentioned goals we expect to make the following steps in the timeframe till 2020: - Complete the assembly of the ISS Russian Segment and to continue its utilization in full configuration; - Provide the creation of the prospective crew transportation system based on a new generation piloted spacecraft; - Build and prepare for operation the first elements of the orbital assembly experimental piloted space complex by the end the ISS life cycle; - Develop elements, technologies and key systems of prospective interplanetary complexes for missions to the Moon and Mars, and develop new means and methods of biomedical support to ensure long-term human space flights, including the interplanetary flights, and so on. 5

5. Future Interaction With NASA In Space Exploration • The experience gained by Russia, US and Europe in the area of piloted space complexes and their long-term utilization, including the ISS activities, allows us to proceed to the implementation of the larger-scale projects, in particular, the development of piloted spacecraft for missions to the Moon and Mars. • Roscosmos supports the necessity of involving technical and scientific potential of other countries for such large-scale projects implementation. • Russia finds acceptable those projects which ensure equal rights of partners who will share the obtained results and also Russia’s participation in the development of critical elements (launch vehicles, power propulsion systems, technologies and experience of long-term crew life support in space). • In this connection Roscosmos considers it expedient to establish the international joint expert group to conduct comprehensive analysis of integration feasibility in the sphere of space exploration. · 12

6. What has Roscosmos learned from the ISS partnership? • • • Apparently, the ISS lessons show that any critical element in the project should have a backup (should be redundant). As a rule, such elements include launch vehicles, crew and cargo transportation spacecraft and Mission Control Centers. During the utilization phase the redundancy should be provided by various modules and project elements for the specific functions such as habitation, power supply and, partly, the payload complexes and systems. The ISS could serve as a unique test stand for developing advanced technologies. This process has already started and will expand as we accumulate more experience and capabilities for autonomous stay on the ISS. The ISS lessons show that educational and public outreach activities are very important for attracting the young people’s interest to space. The ISS international management structure has already demonstrated its success. It would make sense to apply this experience to other big international projects. 13

7. How would you characterize the Russian obligations and that of the US to the ISS in terms of its operational life? • The main tasks of Russia and the US at this point are as follows: - maintenance of operation of the ISS Russian and US Segments for implementation of the national programs of space experiments and research; - fulfillment of mutual obligations under existing international arrangements; - maintenance of ground infrastructure for the ISS nominal operation; - transportation and technical provision of the ISS according to the agreements achieved with NASA in view of the Shuttle retirement in 2010; - participation in managing the ISS program (the ISS coordination boards and groups); - provision of the ISS efficient utilization. • We believe that the Unites States, as the main coordinator of the project, will promote stable and planned implementation of the ISS program, including the transportation and technical provision of the station, the required conditions for the crew presence onboard, improvement of the station control structure, etc. 14

8. How does ISS and its extension past 2015 connect to Russia's future plans for human and robotic exploration beyond low-Earth orbit? • By the end of the ISS life cycle Roscosmos plans to develop and prepare for operation the first elements of the orbital assembly experimental piloted space complex which will become a basis for engineering development for future human missions to Mars beyond 2030. • It is impossible to create such a complex without a preliminary testing of its elements in space and verification of engineering solutions and technologies. • The ISS operation experience demonstrates that the station utilization allows to solve the unique tasks of extending the life of both the station elements and the automatic space instruments (space telescopes, etc) in autonomous flight. This adds another good argument in favor of the ISS program extension till 2020 and beyond. 15