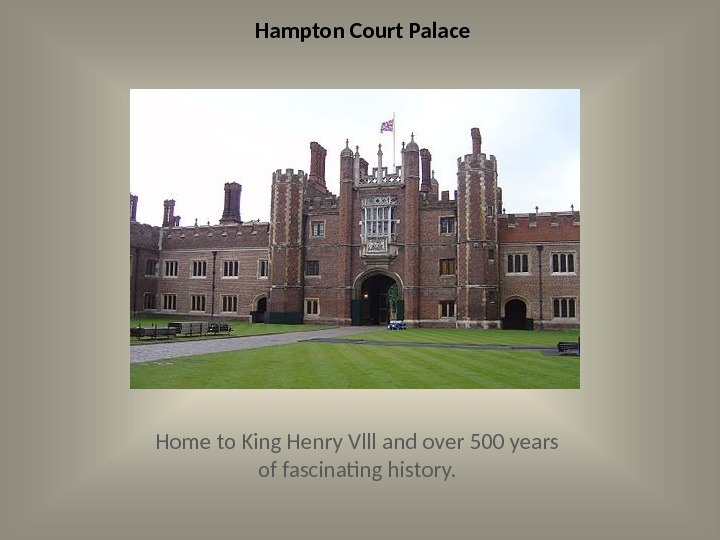 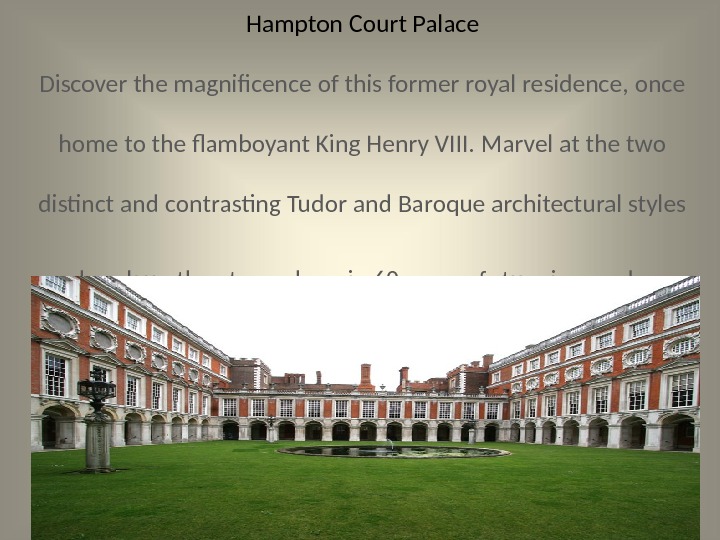 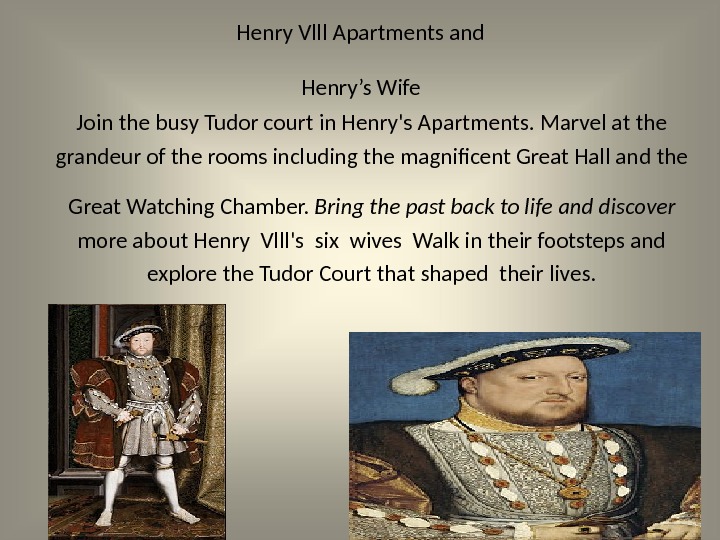 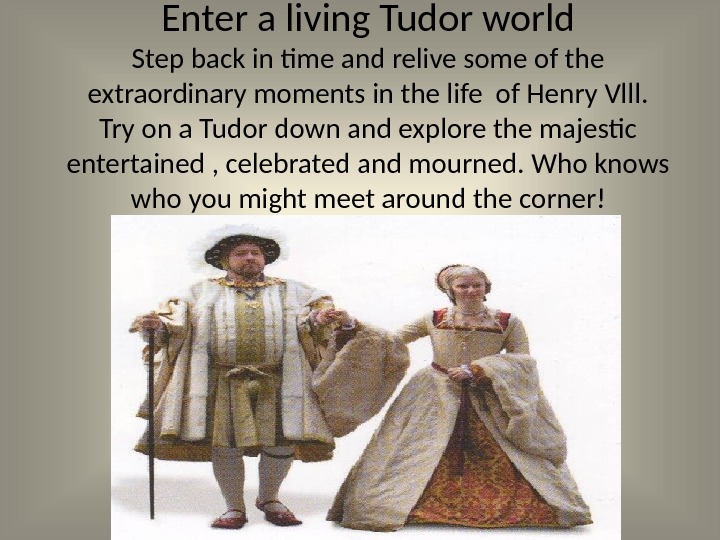 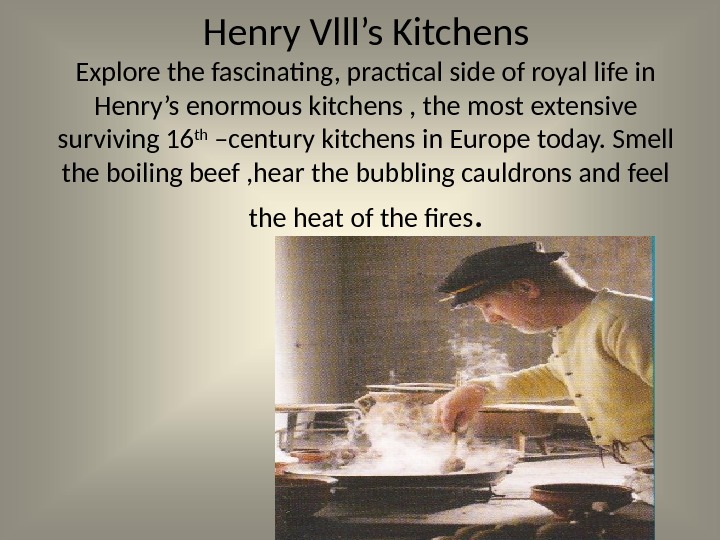 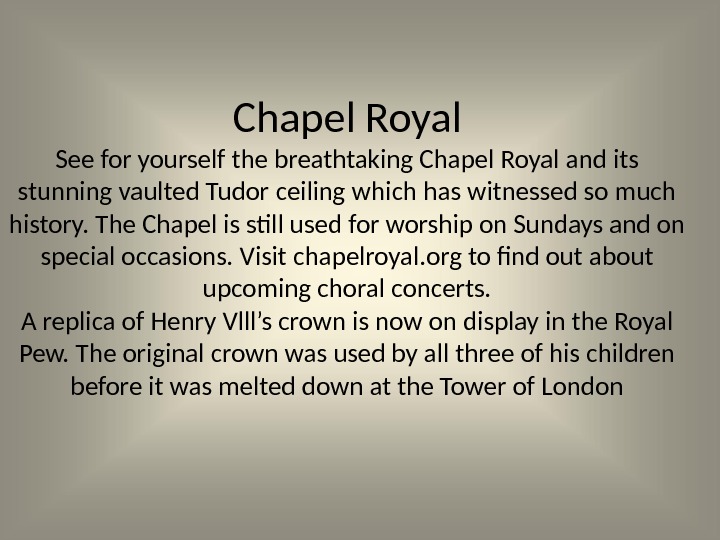 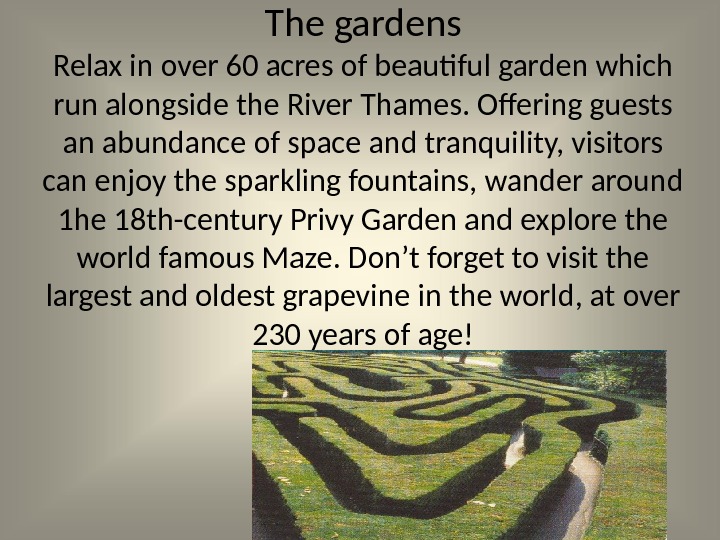 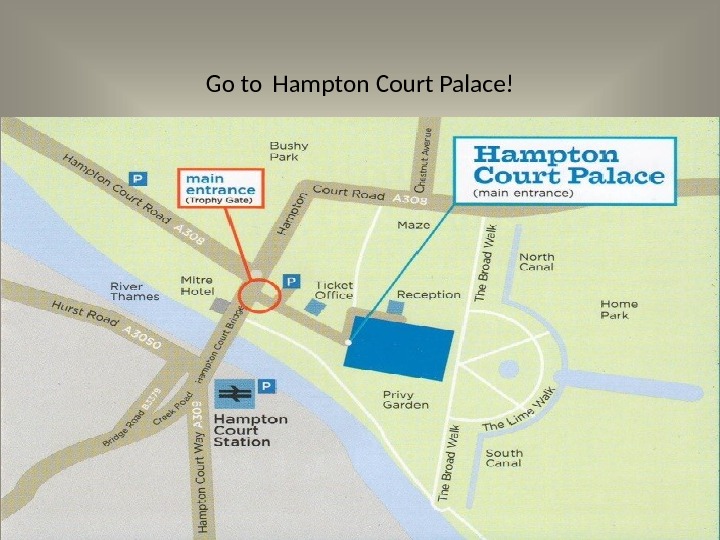 Hampton Court Palace Discover the magnificence of this former royal residence, once home to the flamboyant King Henry VIII. Marvel at the two distinct and contrasting Tudor and Baroque architectural styles and soak up the atmosphere in 60 acres of stunning gardens.

Henry Vlll Apartments and Henry’s Wife Join the busy Tudor court in Henry’s Apartments. Marvel at the grandeur of the rooms including the magnificent Great Hall and the Great Watching Chamber. Bring the past back to life and discover more about Henry Vlll’s six wives Walk in their footsteps and explore the Tudor Court that shaped their lives.

Enter a living Tudor world Step back in time and relive some of the extraordinary moments in the life of Henry Vlll. Try on a Tudor down and explore the majestic entertained , celebrated and mourned. Who knows who you might meet around the corner!

Henry Vlll’s Apartments and Henry wives. Join the busy Tudor court in Henry’s Apartaments. Marvel at the grandeur of the rooms including the magnificent Great Hall and the Great Watching Chamber. Bring the past back to life and discover more about Henry Vlll’s six wives. Walk in their footsteps and explore the Tudor Court that shaped their lives.

Henry Vlll’s Kitchens Explore the fascinating, practical side of royal life in Henry’s enormous kitchens , the most extensive surviving 16 th –century kitchens in Europe today. Smell the boiling beef , hear the bubbling cauldrons and feel the heat of the fires.

Chapel Royal See for yourself the breathtaking Chapel Royal and its stunning vaulted Tudor ceiling which has witnessed so much history. The Chapel is still used for worship on Sundays and on special occasions. Visit chapelroyal. org to find out about upcoming choral concerts. A replica of Henry Vlll’s crown is now on display in the Royal Pew. The original crown was used by all three of his children before it was melted down at the Tower of London

The gardens Relax in over 60 acres of beautiful garden which run alongside the River Thames. Offering guests an abundance of space and tranquility, visitors can enjoy the sparkling fountains, wander around 1 he 18 th-century Privy Garden and explore the world famous Maze. Don’t forget to visit the largest and oldest grapevine in the world, at over 230 years of age!

A tale of two palaces Henry Vlll wasn’t the monarch to leave his mark on Hampton Court. In the 17 th -century, William lll and Mary ll commissioned Christopher Wren to transform the palace in the elegant Baroque fashion. However, Wren’s grand designs were never completed, leaving a palace of two halves: one Tudor, one Baroque. Today, you can marvel at the opulent William lll and Mary ll’s Apartments and wander through the comparative intimacy of the Georgian Private Apartments. Come and decide which half you prefer