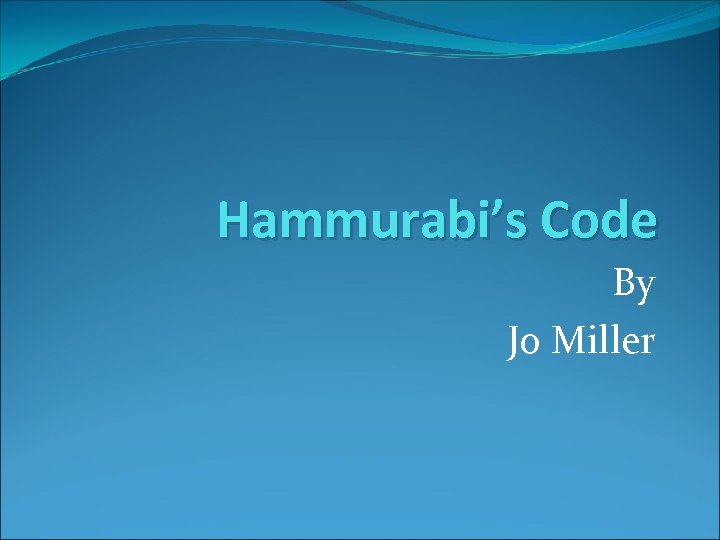 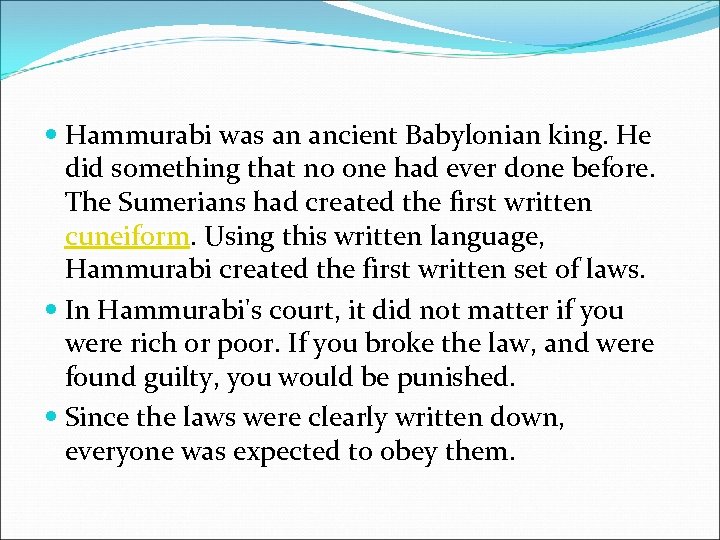 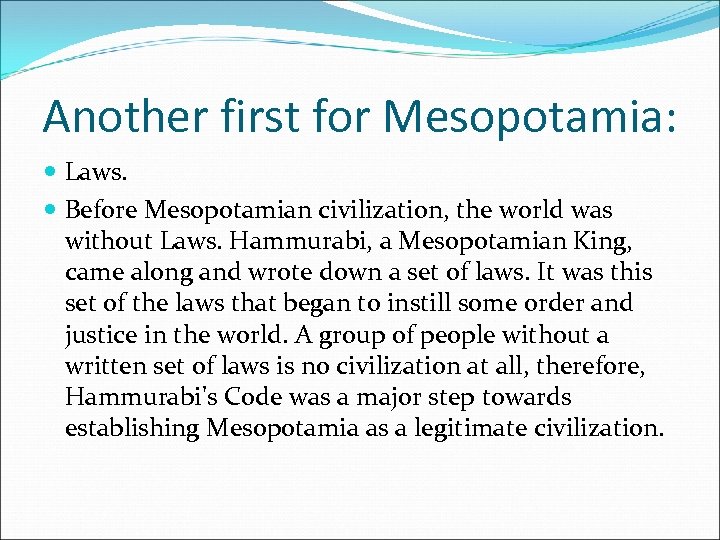 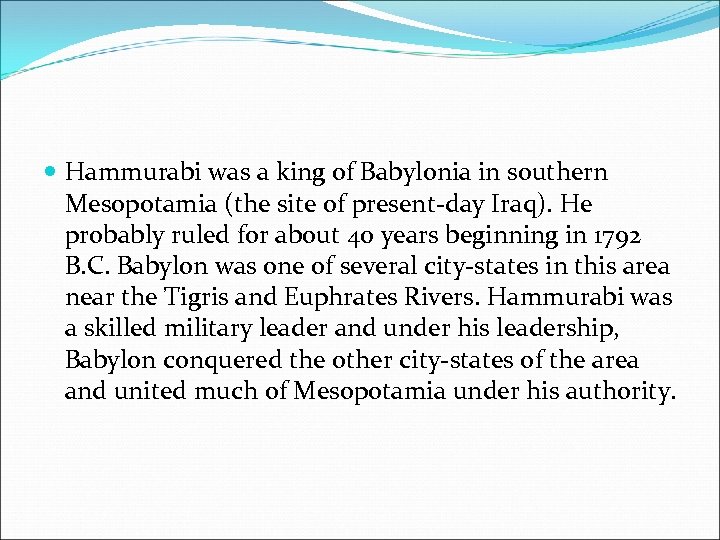 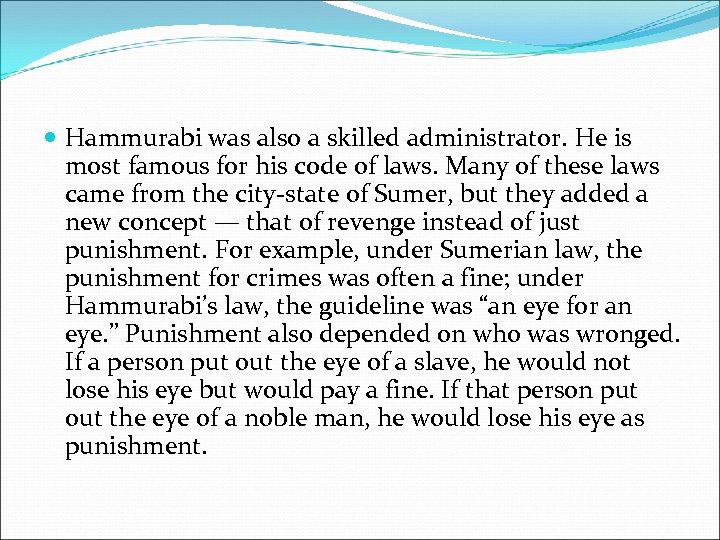 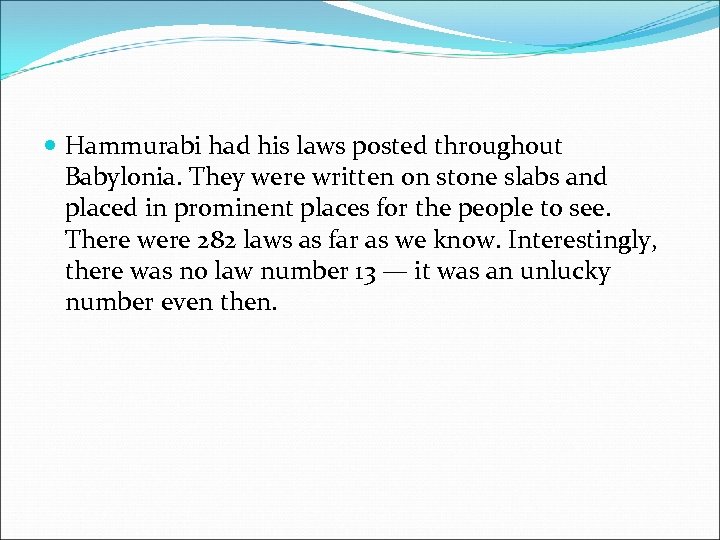 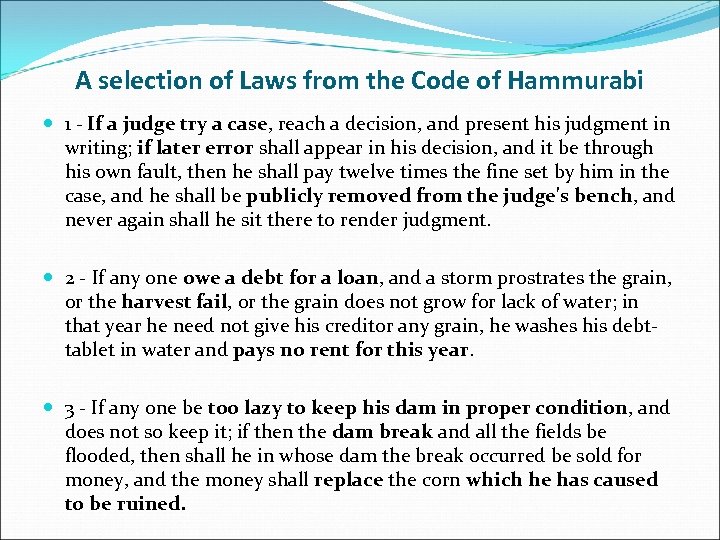 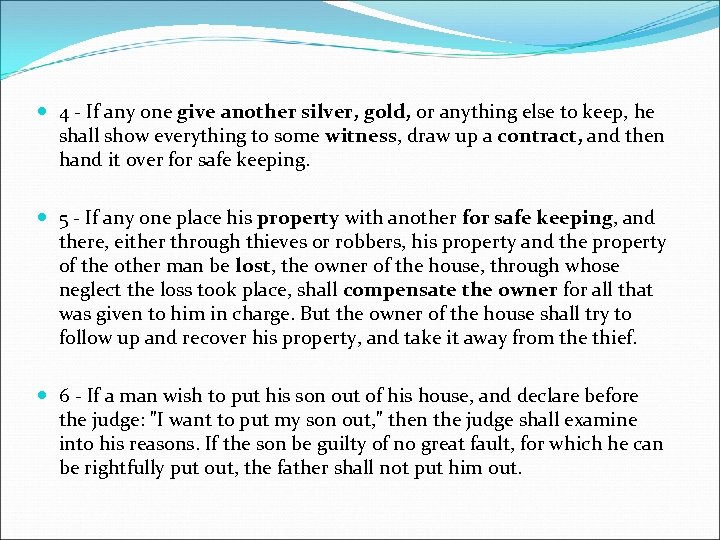 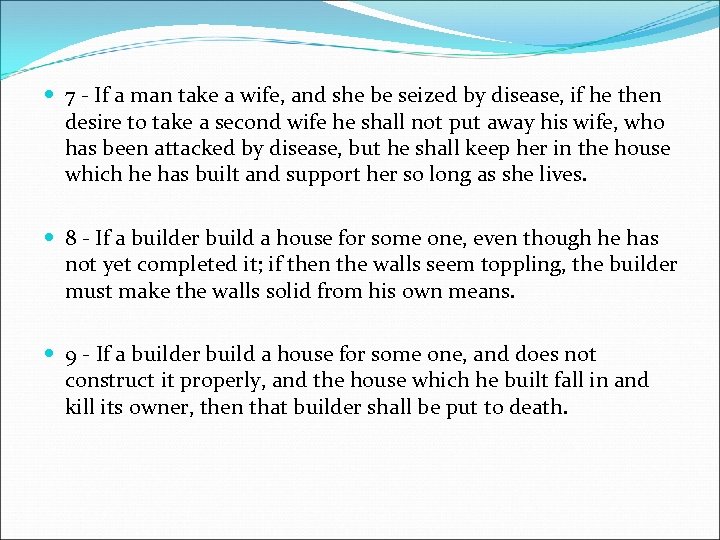 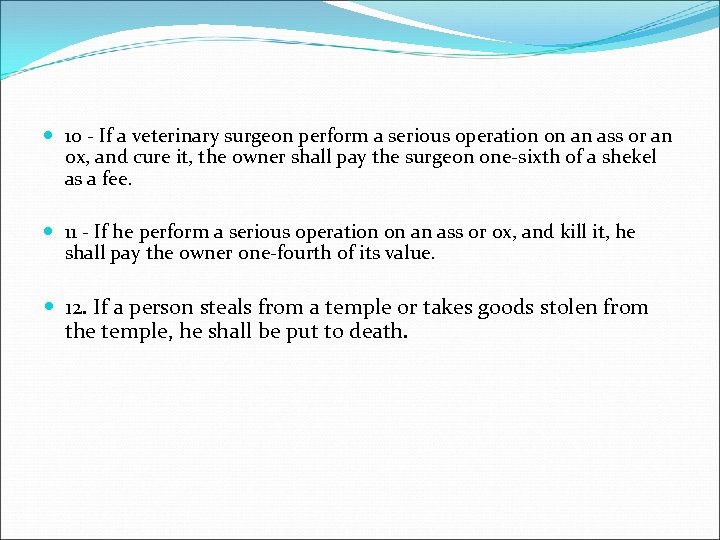 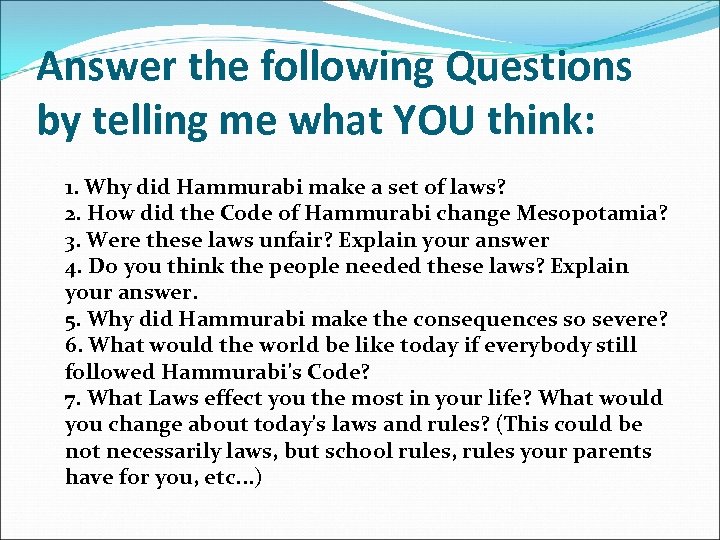 Hammurabi was an ancient Babylonian king. He did something that no one had ever done before. The Sumerians had created the first written cuneiform. Using this written language, Hammurabi created the first written set of laws. In Hammurabi's court, it did not matter if you were rich or poor. If you broke the law, and were found guilty, you would be punished. Since the laws were clearly written down, everyone was expected to obey them.

Another first for Mesopotamia: Laws. Before Mesopotamian civilization, the world was without Laws. Hammurabi, a Mesopotamian King, came along and wrote down a set of laws. It was this set of the laws that began to instill some order and justice in the world. A group of people without a written set of laws is no civilization at all, therefore, Hammurabi's Code was a major step towards establishing Mesopotamia as a legitimate civilization.

Hammurabi was a king of Babylonia in southern Mesopotamia (the site of present-day Iraq). He probably ruled for about 40 years beginning in 1792 B. C. Babylon was one of several city-states in this area near the Tigris and Euphrates Rivers. Hammurabi was a skilled military leader and under his leadership, Babylon conquered the other city-states of the area and united much of Mesopotamia under his authority.

Hammurabi was also a skilled administrator. He is most famous for his code of laws. Many of these laws came from the city-state of Sumer, but they added a new concept — that of revenge instead of just punishment. For example, under Sumerian law, the punishment for crimes was often a fine; under Hammurabi’s law, the guideline was “an eye for an eye. ” Punishment also depended on who was wronged. If a person put out the eye of a slave, he would not lose his eye but would pay a fine. If that person put out the eye of a noble man, he would lose his eye as punishment.

Hammurabi had his laws posted throughout Babylonia. They were written on stone slabs and placed in prominent places for the people to see. There were 282 laws as far as we know. Interestingly, there was no law number 13 — it was an unlucky number even then.

A selection of Laws from the Code of Hammurabi 1 - If a judge try a case, reach a decision, and present his judgment in writing; if later error shall appear in his decision, and it be through his own fault, then he shall pay twelve times the fine set by him in the case, and he shall be publicly removed from the judge's bench, and never again shall he sit there to render judgment. 2 - If any one owe a debt for a loan, and a storm prostrates the grain, or the harvest fail, or the grain does not grow for lack of water; in that year he need not give his creditor any grain, he washes his debttablet in water and pays no rent for this year. 3 - If any one be too lazy to keep his dam in proper condition, and does not so keep it; if then the dam break and all the fields be flooded, then shall he in whose dam the break occurred be sold for money, and the money shall replace the corn which he has caused to be ruined.

4 - If any one give another silver, gold, or anything else to keep, he shall show everything to some witness, draw up a contract, and then hand it over for safe keeping. 5 - If any one place his property with another for safe keeping, and there, either through thieves or robbers, his property and the property of the other man be lost, the owner of the house, through whose neglect the loss took place, shall compensate the owner for all that was given to him in charge. But the owner of the house shall try to follow up and recover his property, and take it away from the thief. 6 - If a man wish to put his son out of his house, and declare before the judge: "I want to put my son out, " then the judge shall examine into his reasons. If the son be guilty of no great fault, for which he can be rightfully put out, the father shall not put him out.

7 - If a man take a wife, and she be seized by disease, if he then desire to take a second wife he shall not put away his wife, who has been attacked by disease, but he shall keep her in the house which he has built and support her so long as she lives. 8 - If a builder build a house for some one, even though he has not yet completed it; if then the walls seem toppling, the builder must make the walls solid from his own means. 9 - If a builder build a house for some one, and does not construct it properly, and the house which he built fall in and kill its owner, then that builder shall be put to death.

Answer the following Questions by telling me what YOU think: 1. Why did Hammurabi make a set of laws? 2. How did the Code of Hammurabi change Mesopotamia? 3. Were these laws unfair? Explain your answer 4. Do you think the people needed these laws? Explain your answer. 5. Why did Hammurabi make the consequences so severe? 6. What would the world be like today if everybody still followed Hammurabi's Code? 7. What Laws effect you the most in your life? What would you change about today's laws and rules? (This could be not necessarily laws, but school rules, rules your parents have for you, etc. . . )