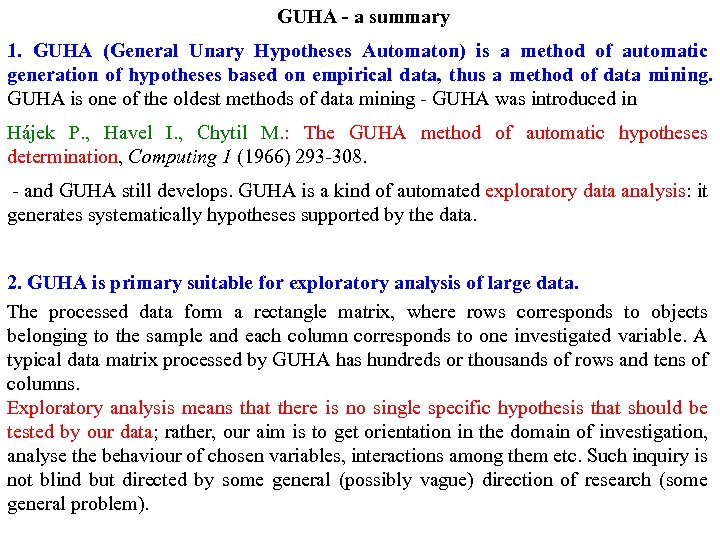 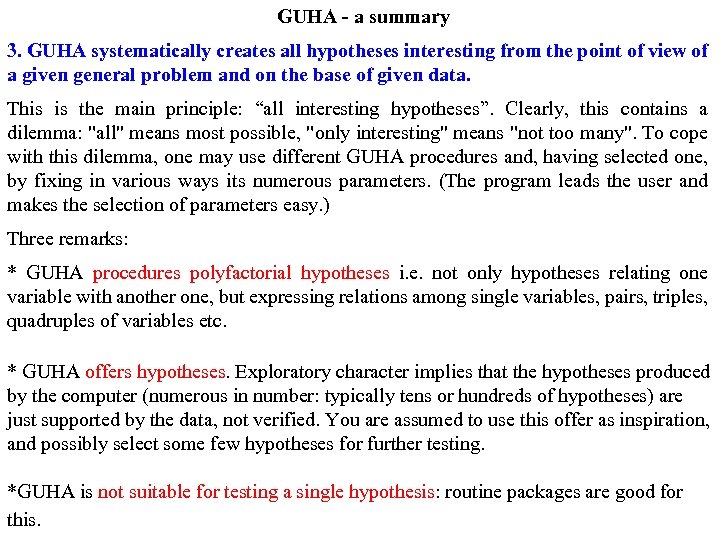 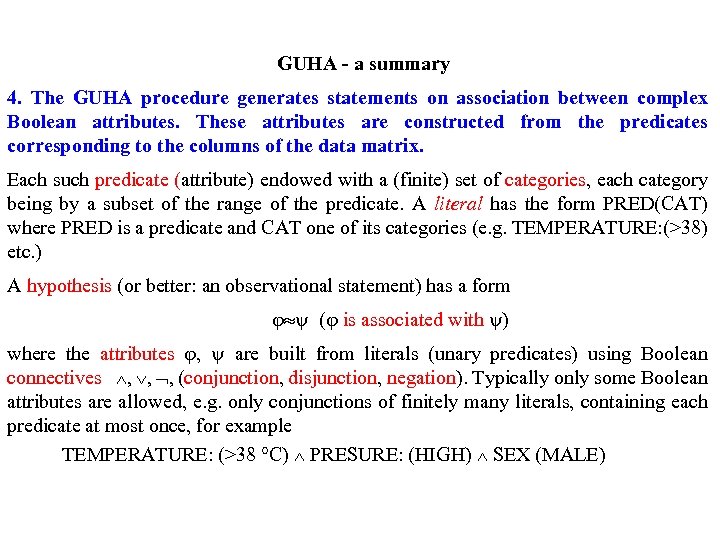 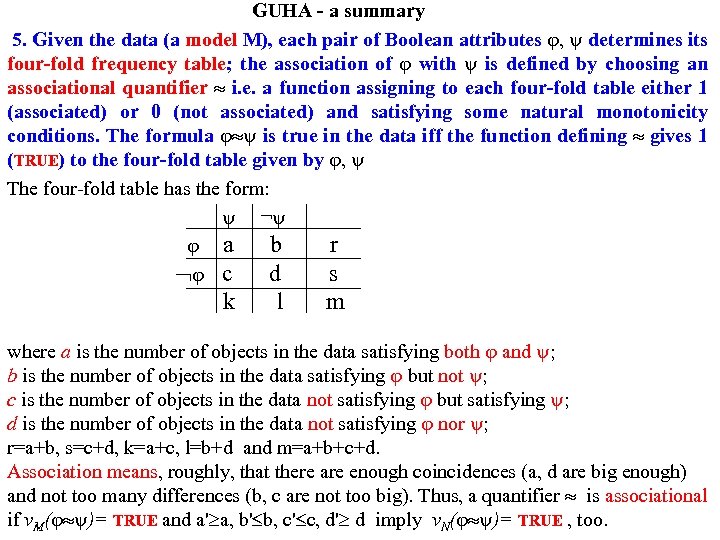 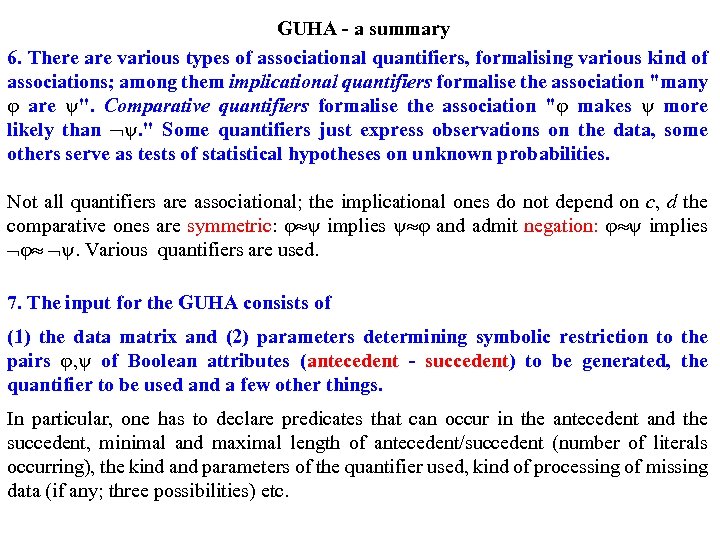 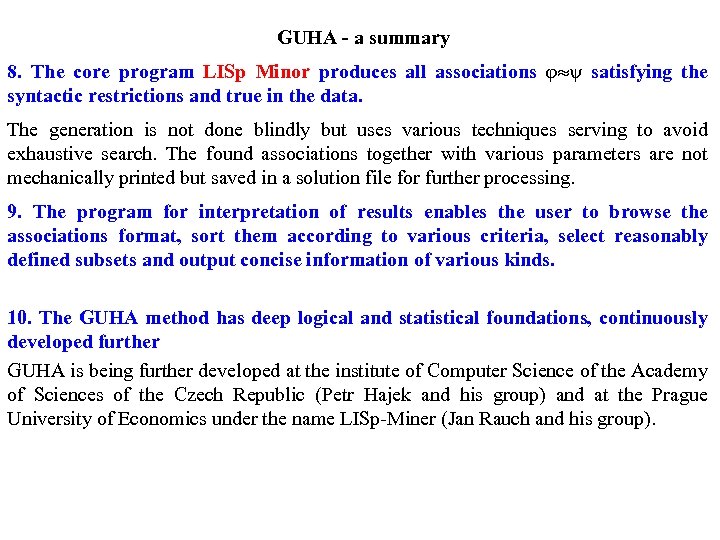 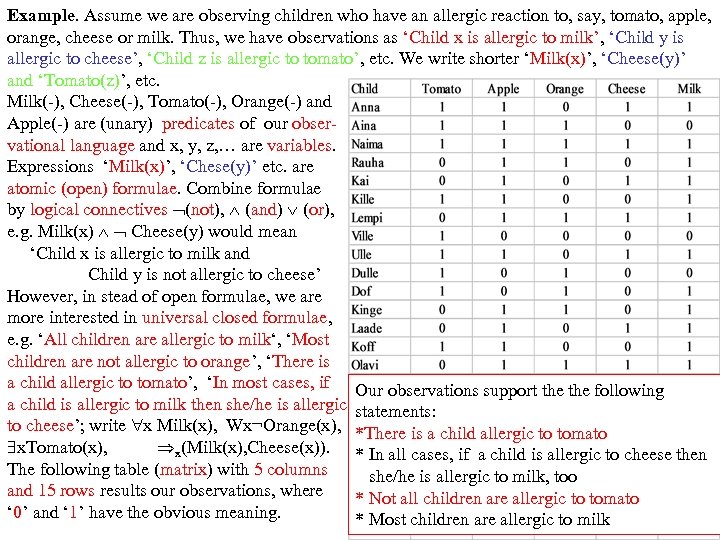 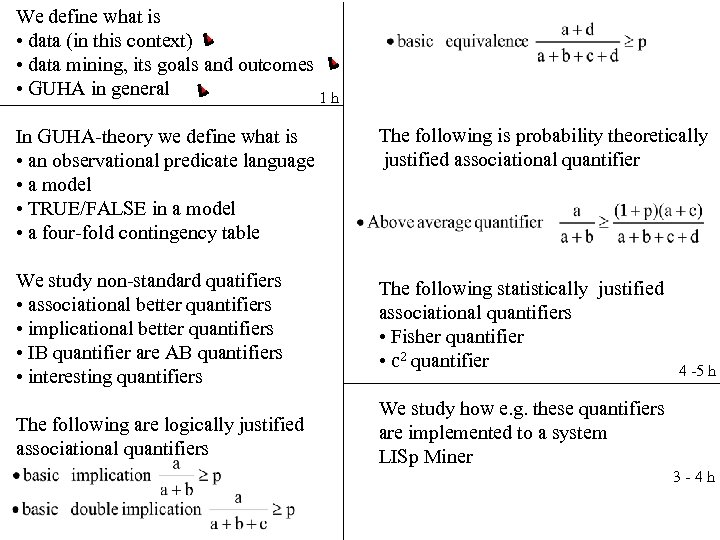 GUHA - a summary 1. GUHA (General Unary Hypotheses Automaton) is a method of automatic generation of hypotheses based on empirical data, thus a method of data mining. GUHA is one of the oldest methods of data mining - GUHA was introduced in Hájek P. , Havel I. , Chytil M. : The GUHA method of automatic hypotheses determination, Computing 1 (1966) 293 -308. - and GUHA still develops. GUHA is a kind of automated exploratory data analysis: it generates systematically hypotheses supported by the data. 2. GUHA is primary suitable for exploratory analysis of large data. The processed data form a rectangle matrix, where rows corresponds to objects belonging to the sample and each column corresponds to one investigated variable. A typical data matrix processed by GUHA has hundreds or thousands of rows and tens of columns. Exploratory analysis means that there is no single specific hypothesis that should be tested by our data; rather, our aim is to get orientation in the domain of investigation, analyse the behaviour of chosen variables, interactions among them etc. Such inquiry is not blind but directed by some general (possibly vague) direction of research (some general problem).

GUHA - a summary 3. GUHA systematically creates all hypotheses interesting from the point of view of a given general problem and on the base of given data. This is the main principle: “all interesting hypotheses”. Clearly, this contains a dilemma: "all'' means most possible, "only interesting'' means "not too many''. To cope with this dilemma, one may use different GUHA procedures and, having selected one, by fixing in various ways its numerous parameters. (The program leads the user and makes the selection of parameters easy. ) Three remarks: * GUHA procedures polyfactorial hypotheses i. e. not only hypotheses relating one variable with another one, but expressing relations among single variables, pairs, triples, quadruples of variables etc. * GUHA offers hypotheses. Exploratory character implies that the hypotheses produced by the computer (numerous in number: typically tens or hundreds of hypotheses) are just supported by the data, not verified. You are assumed to use this offer as inspiration, and possibly select some few hypotheses for further testing. *GUHA is not suitable for testing a single hypothesis: routine packages are good for this.

GUHA - a summary 4. The GUHA procedure generates statements on association between complex Boolean attributes. These attributes are constructed from the predicates corresponding to the columns of the data matrix. Each such predicate (attribute) endowed with a (finite) set of categories, each category being by a subset of the range of the predicate. A literal has the form PRED(CAT) where PRED is a predicate and CAT one of its categories (e. g. TEMPERATURE: (>38) etc. ) A hypothesis (or better: an observational statement) has a form ( is associated with ) where the attributes , are built from literals (unary predicates) using Boolean connectives , , , (conjunction, disjunction, negation). Typically only some Boolean attributes are allowed, e. g. only conjunctions of finitely many literals, containing each predicate at most once, for example TEMPERATURE: (>38 °C) PRESURE: (HIGH) SEX (MALE)

GUHA - a summary 6. There are various types of associational quantifiers, formalising various kind of associations; among them implicational quantifiers formalise the association "many are ''. Comparative quantifiers formalise the association " makes more likely than . '' Some quantifiers just express observations on the data, some others serve as tests of statistical hypotheses on unknown probabilities. Not all quantifiers are associational; the implicational ones do not depend on c, d the comparative ones are symmetric: implies and admit negation: implies . Various quantifiers are used. 7. The input for the GUHA consists of (1) the data matrix and (2) parameters determining symbolic restriction to the pairs , of Boolean attributes (antecedent - succedent) to be generated, the quantifier to be used and a few other things. In particular, one has to declare predicates that can occur in the antecedent and the succedent, minimal and maximal length of antecedent/succedent (number of literals occurring), the kind and parameters of the quantifier used, kind of processing of missing data (if any; three possibilities) etc.

GUHA - a summary 8. The core program LISp Minor produces all associations satisfying the syntactic restrictions and true in the data. The generation is not done blindly but uses various techniques serving to avoid exhaustive search. The found associations together with various parameters are not mechanically printed but saved in a solution file for further processing. 9. The program for interpretation of results enables the user to browse the associations format, sort them according to various criteria, select reasonably defined subsets and output concise information of various kinds. 10. The GUHA method has deep logical and statistical foundations, continuously developed further GUHA is being further developed at the institute of Computer Science of the Academy of Sciences of the Czech Republic (Petr Hajek and his group) and at the Prague University of Economics under the name LISp-Miner (Jan Rauch and his group).