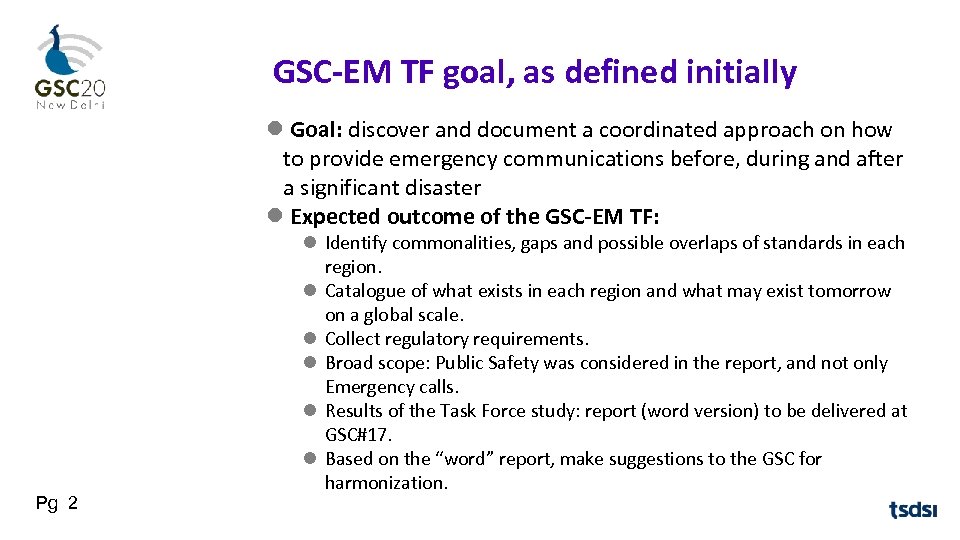 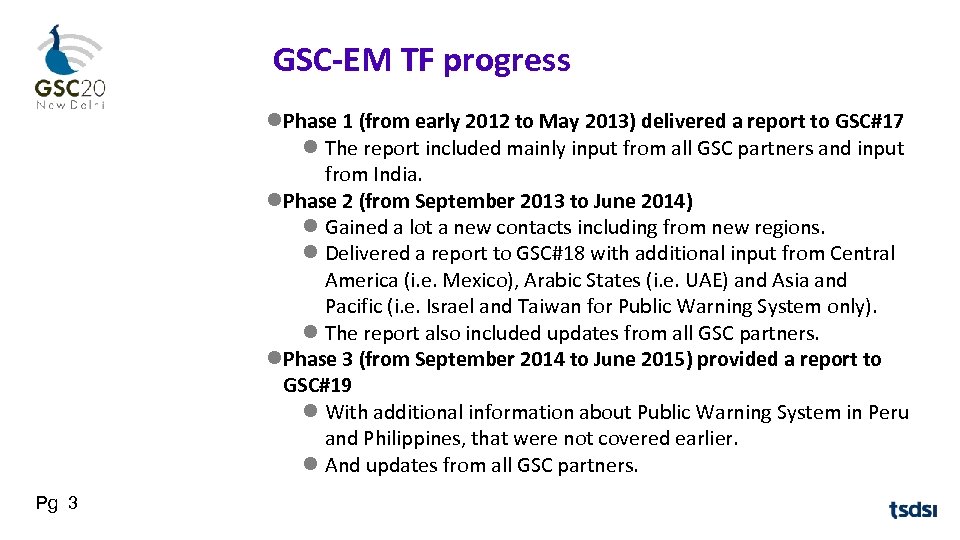 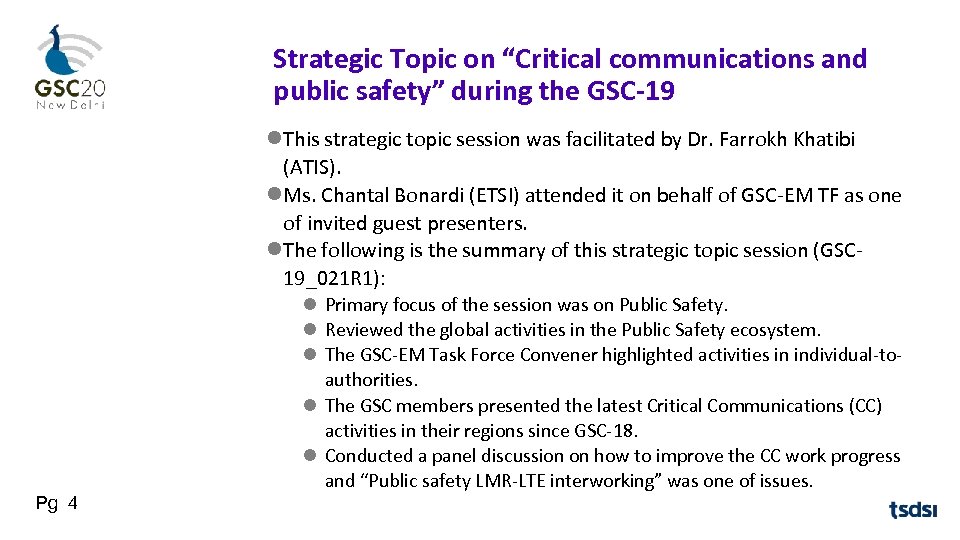 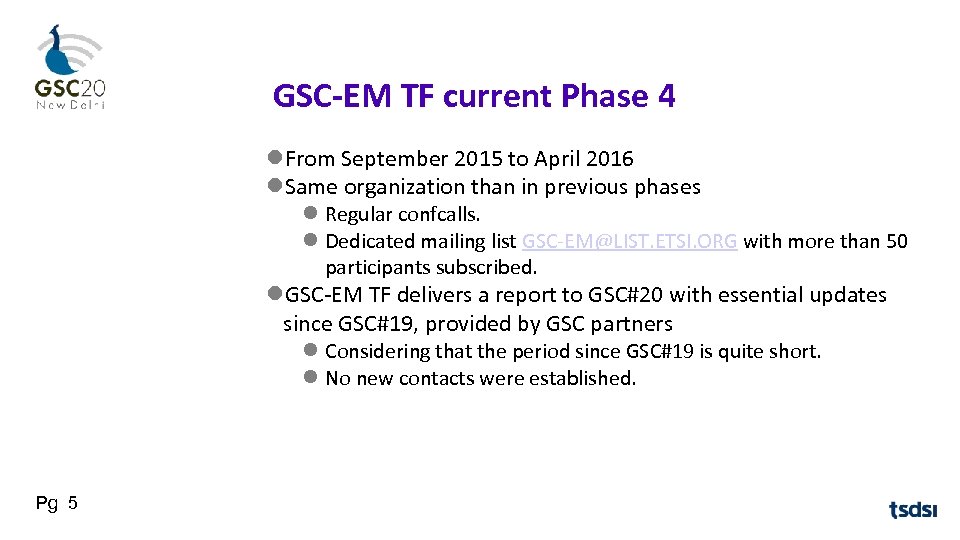 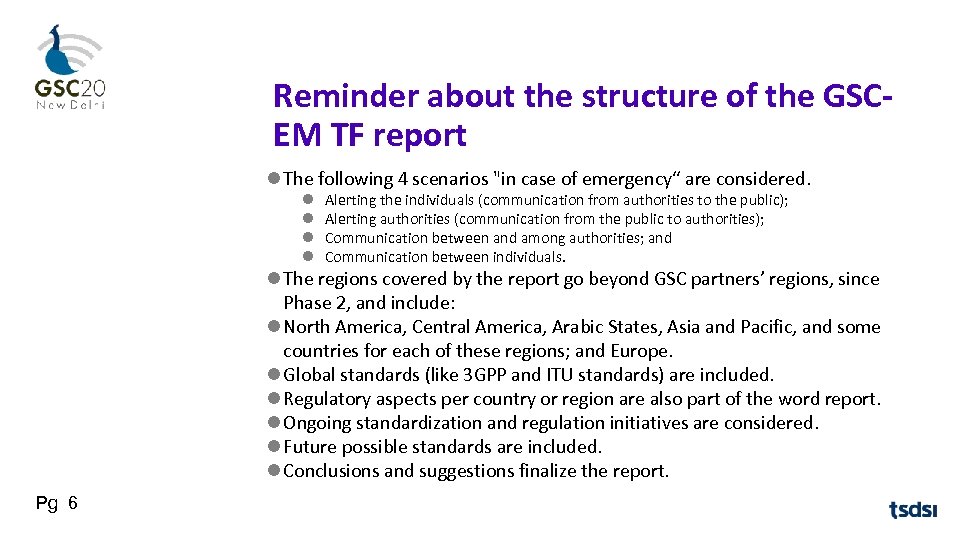 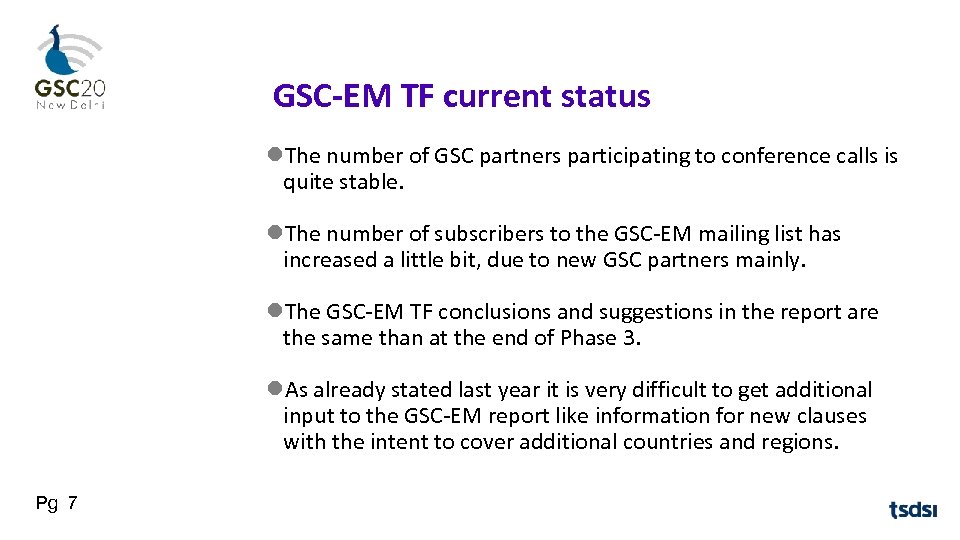 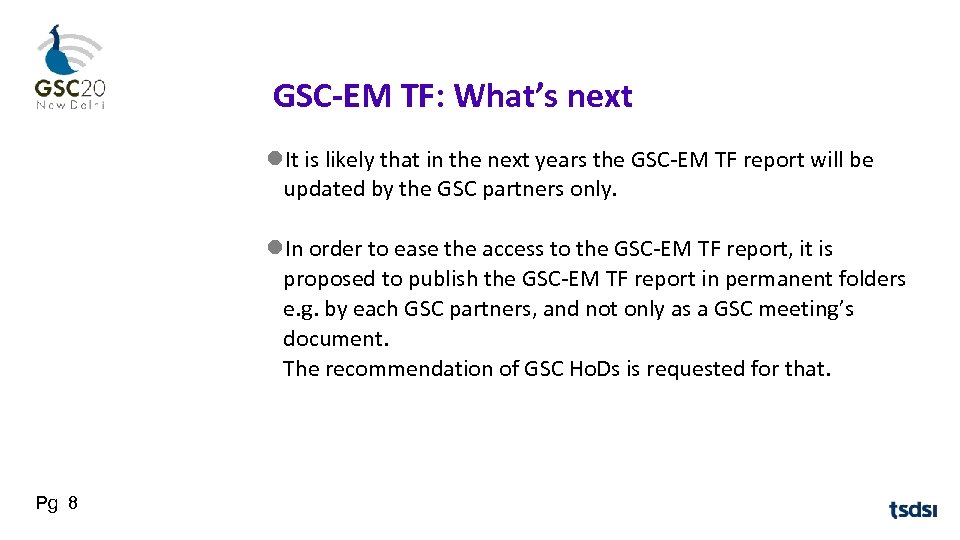 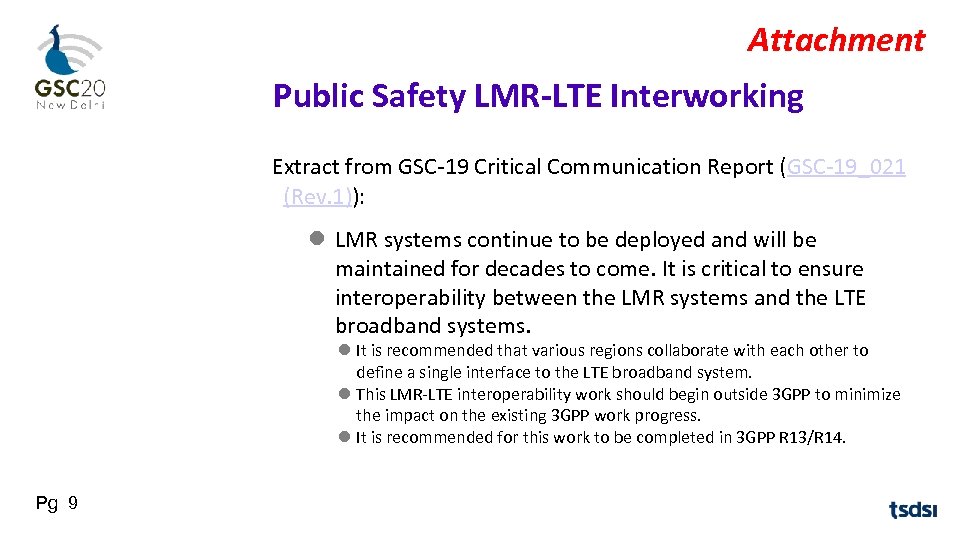 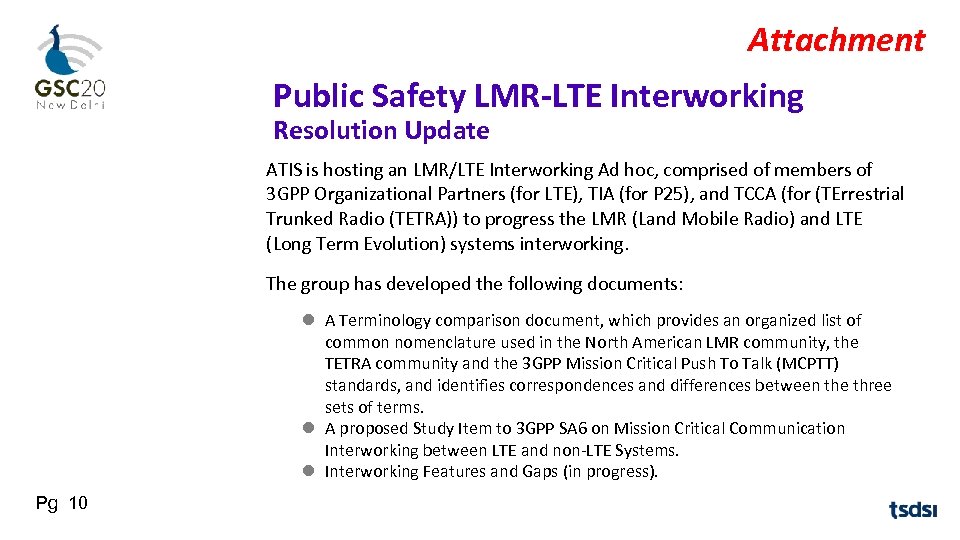 GSC-EM TF goal, as defined initially Goal: discover and document a coordinated approach on how to provide emergency communications before, during and after a significant disaster Expected outcome of the GSC-EM TF: Pg 2 Identify commonalities, gaps and possible overlaps of standards in each region. Catalogue of what exists in each region and what may exist tomorrow on a global scale. Collect regulatory requirements. Broad scope: Public Safety was considered in the report, and not only Emergency calls. Results of the Task Force study: report (word version) to be delivered at GSC#17. Based on the “word” report, make suggestions to the GSC for harmonization.

GSC-EM TF progress Phase 1 (from early 2012 to May 2013) delivered a report to GSC#17 The report included mainly input from all GSC partners and input from India. Phase 2 (from September 2013 to June 2014) Gained a lot a new contacts including from new regions. Delivered a report to GSC#18 with additional input from Central America (i. e. Mexico), Arabic States (i. e. UAE) and Asia and Pacific (i. e. Israel and Taiwan for Public Warning System only). The report also included updates from all GSC partners. Phase 3 (from September 2014 to June 2015) provided a report to GSC#19 With additional information about Public Warning System in Peru and Philippines, that were not covered earlier. And updates from all GSC partners. Pg 3

Strategic Topic on “Critical communications and public safety” during the GSC-19 This strategic topic session was facilitated by Dr. Farrokh Khatibi (ATIS). Ms. Chantal Bonardi (ETSI) attended it on behalf of GSC-EM TF as one of invited guest presenters. The following is the summary of this strategic topic session (GSC 19_021 R 1): Primary focus of the session was on Public Safety. Reviewed the global activities in the Public Safety ecosystem. The GSC-EM Task Force Convener highlighted activities in individual-toauthorities. The GSC members presented the latest Critical Communications (CC) activities in their regions since GSC-18. Conducted a panel discussion on how to improve the CC work progress and “Public safety LMR-LTE interworking” was one of issues. Pg 4

GSC-EM TF current Phase 4 From September 2015 to April 2016 Same organization than in previous phases Regular confcalls. Dedicated mailing list [email protected] ETSI. ORG with more than 50 participants subscribed. GSC-EM TF delivers a report to GSC#20 with essential updates since GSC#19, provided by GSC partners Considering that the period since GSC#19 is quite short. No new contacts were established. Pg 5

Reminder about the structure of the GSCEM TF report The following 4 scenarios "in case of emergency“ are considered. Alerting the individuals (communication from authorities to the public); Alerting authorities (communication from the public to authorities); Communication between and among authorities; and Communication between individuals. The regions covered by the report go beyond GSC partners’ regions, since Phase 2, and include: North America, Central America, Arabic States, Asia and Pacific, and some countries for each of these regions; and Europe. Global standards (like 3 GPP and ITU standards) are included. Regulatory aspects per country or region are also part of the word report. Ongoing standardization and regulation initiatives are considered. Future possible standards are included. Conclusions and suggestions finalize the report. Pg 6

GSC-EM TF current status The number of GSC partners participating to conference calls is quite stable. The number of subscribers to the GSC-EM mailing list has increased a little bit, due to new GSC partners mainly. The GSC-EM TF conclusions and suggestions in the report are the same than at the end of Phase 3. As already stated last year it is very difficult to get additional input to the GSC-EM report like information for new clauses with the intent to cover additional countries and regions. Pg 7

Attachment Public Safety LMR-LTE Interworking Extract from GSC-19 Critical Communication Report (GSC-19_021 (Rev. 1)): LMR systems continue to be deployed and will be maintained for decades to come. It is critical to ensure interoperability between the LMR systems and the LTE broadband systems. It is recommended that various regions collaborate with each other to define a single interface to the LTE broadband system. This LMR-LTE interoperability work should begin outside 3 GPP to minimize the impact on the existing 3 GPP work progress. It is recommended for this work to be completed in 3 GPP R 13/R 14. Pg 9