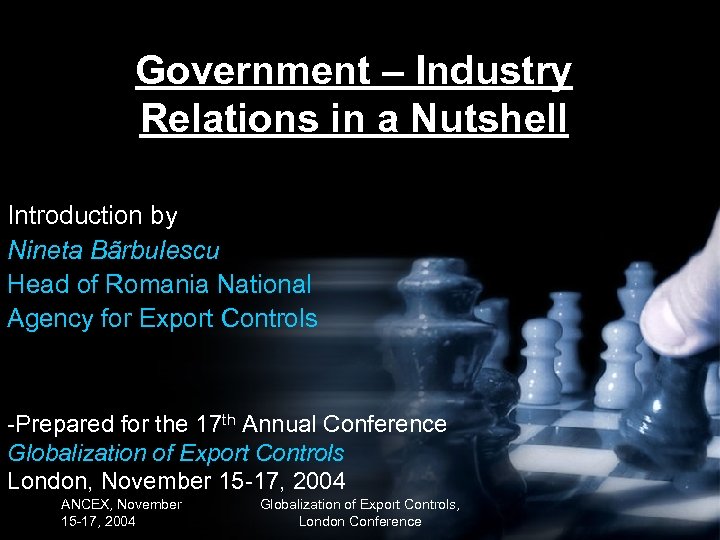 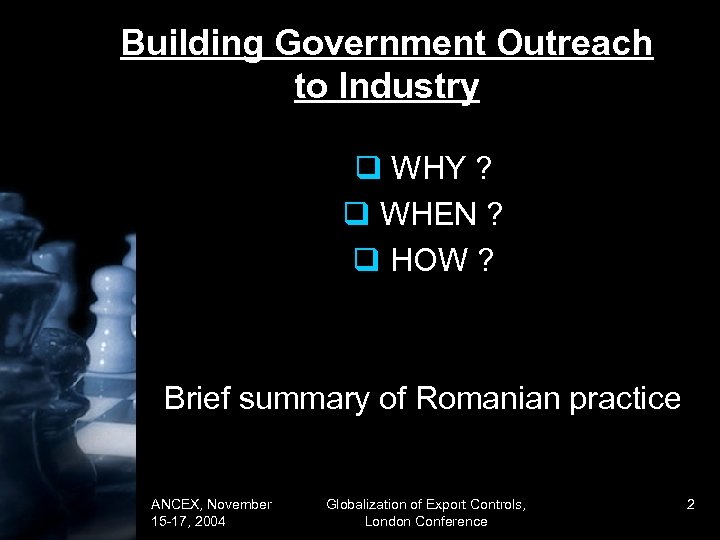 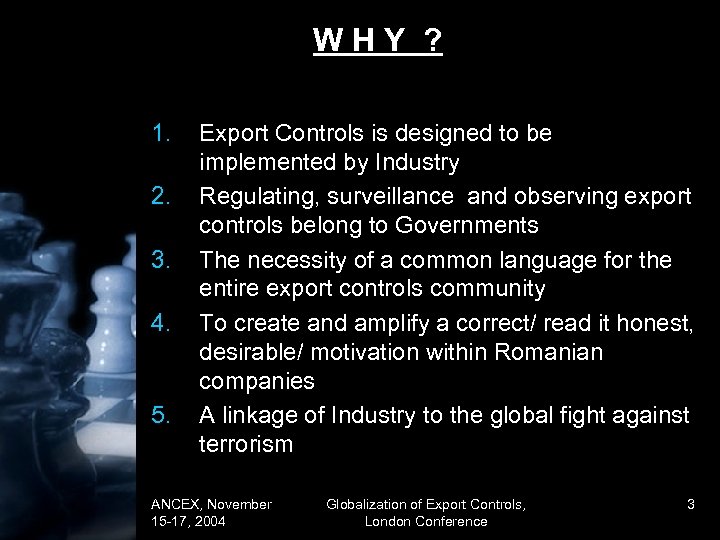 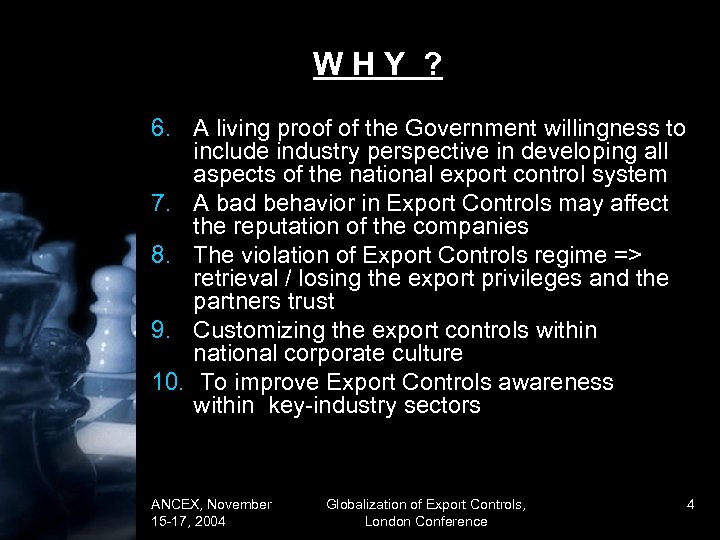 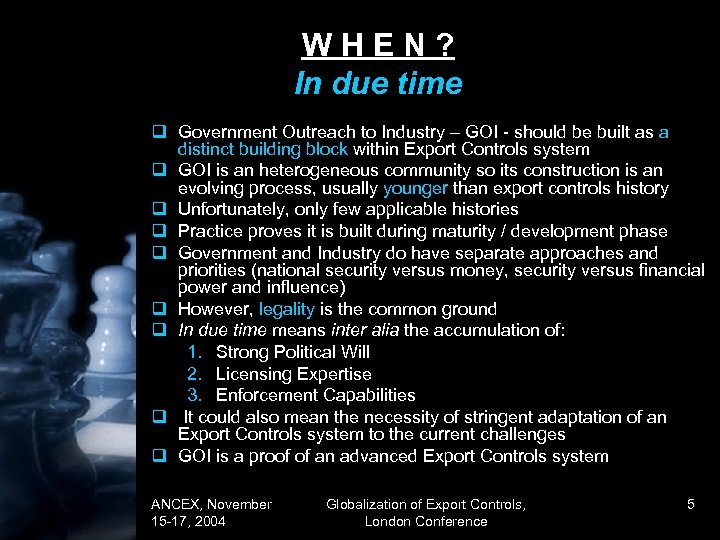 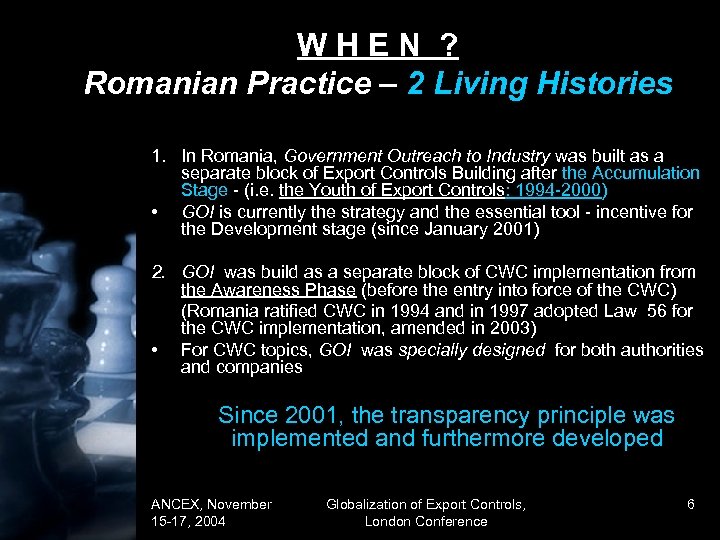 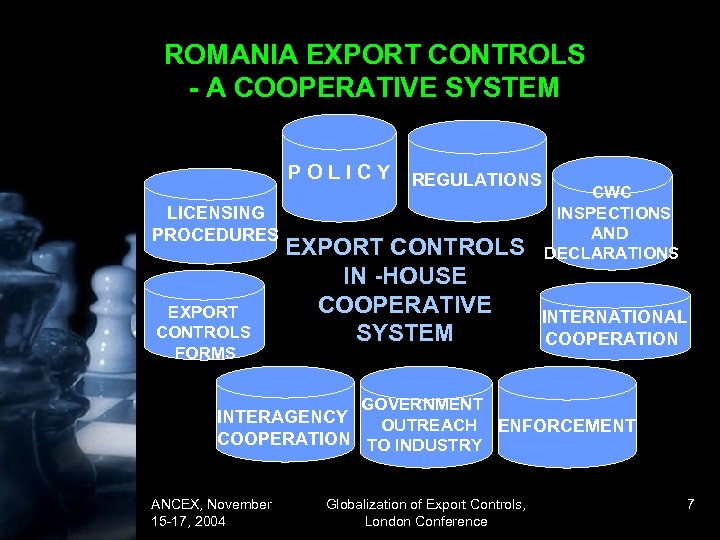 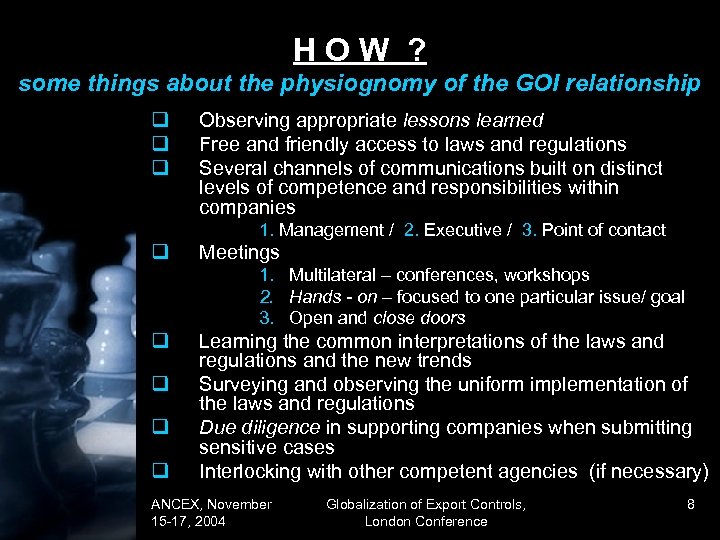 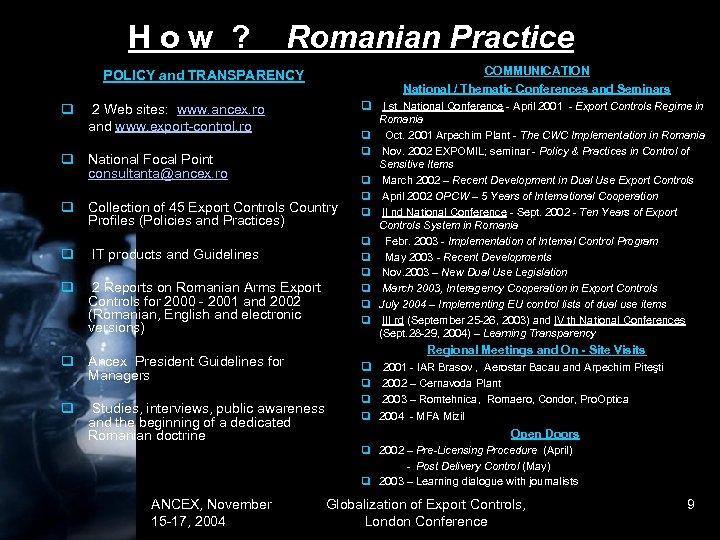 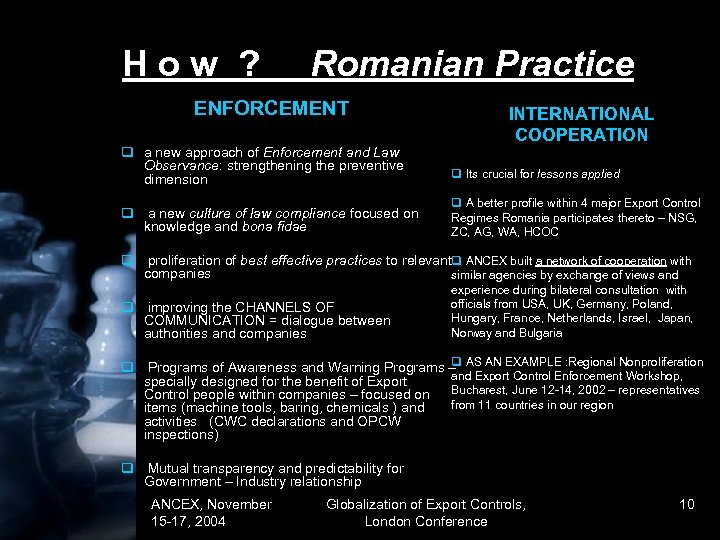 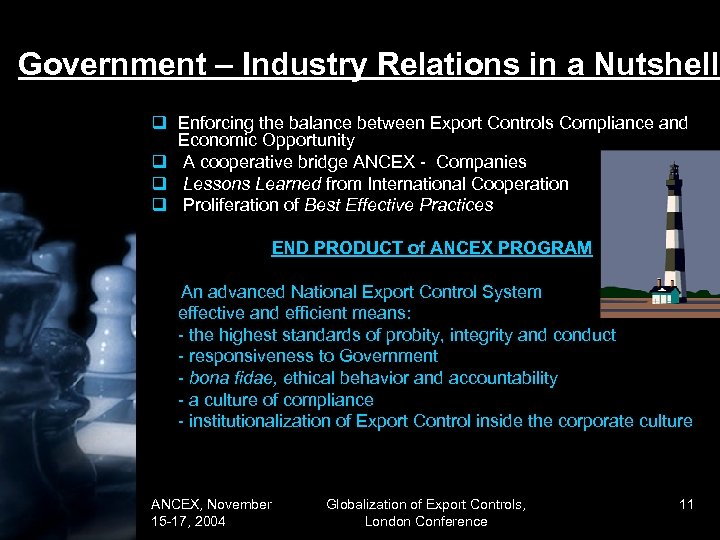 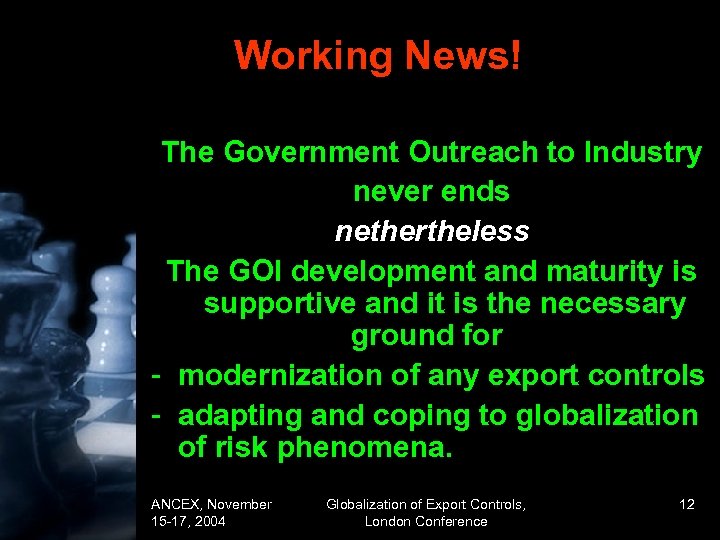 WHY ? 1. 2. 3. 4. 5. Export Controls is designed to be implemented by Industry Regulating, surveillance and observing export controls belong to Governments The necessity of a common language for the entire export controls community To create and amplify a correct/ read it honest, desirable/ motivation within Romanian companies A linkage of Industry to the global fight against terrorism ANCEX, November 15 -17, 2004 Globalization of Export Controls, London Conference 3

WHEN? In due time q Government Outreach to Industry – GOI - should be built as a distinct building block within Export Controls system q GOI is an heterogeneous community so its construction is an evolving process, usually younger than export controls history q Unfortunately, only few applicable histories q Practice proves it is built during maturity / development phase q Government and Industry do have separate approaches and priorities (national security versus money, security versus financial power and influence) q However, legality is the common ground q In due time means inter alia the accumulation of: 1. Strong Political Will 2. Licensing Expertise 3. Enforcement Capabilities q It could also mean the necessity of stringent adaptation of an Export Controls system to the current challenges q GOI is a proof of an advanced Export Controls system ANCEX, November 15 -17, 2004 Globalization of Export Controls, London Conference 5

WHEN ? Romanian Practice – 2 Living Histories 1. In Romania, Government Outreach to Industry was built as a separate block of Export Controls Building after the Accumulation Stage - (i. e. the Youth of Export Controls: 1994 -2000) • GOI is currently the strategy and the essential tool - incentive for the Development stage (since January 2001) 2. GOI was build as a separate block of CWC implementation from the Awareness Phase (before the entry into force of the CWC) (Romania ratified CWC in 1994 and in 1997 adopted Law 56 for the CWC implementation, amended in 2003) • For CWC topics, GOI was specially designed for both authorities and companies Since 2001, the transparency principle was implemented and furthermore developed ANCEX, November 15 -17, 2004 Globalization of Export Controls, London Conference 6

HOW ? some things about the physiognomy of the GOI relationship q q q Observing appropriate lessons learned Free and friendly access to laws and regulations Several channels of communications built on distinct levels of competence and responsibilities within companies 1. Management / 2. Executive / 3. Point of contact q Meetings 1. Multilateral – conferences, workshops 2. Hands - on – focused to one particular issue/ goal 3. Open and close doors q q Learning the common interpretations of the laws and regulations and the new trends Surveying and observing the uniform implementation of the laws and regulations Due diligence in supporting companies when submitting sensitive cases Interlocking with other competent agencies (if necessary) ANCEX, November 15 -17, 2004 Globalization of Export Controls, London Conference 8

Working News! The Government Outreach to Industry never ends nethertheless The GOI development and maturity is supportive and it is the necessary ground for - modernization of any export controls - adapting and coping to globalization of risk phenomena. ANCEX, November 15 -17, 2004 Globalization of Export Controls, London Conference 12