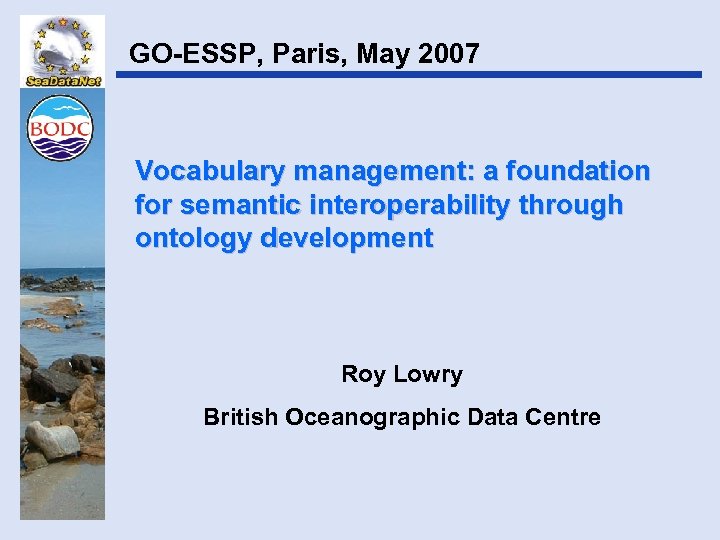 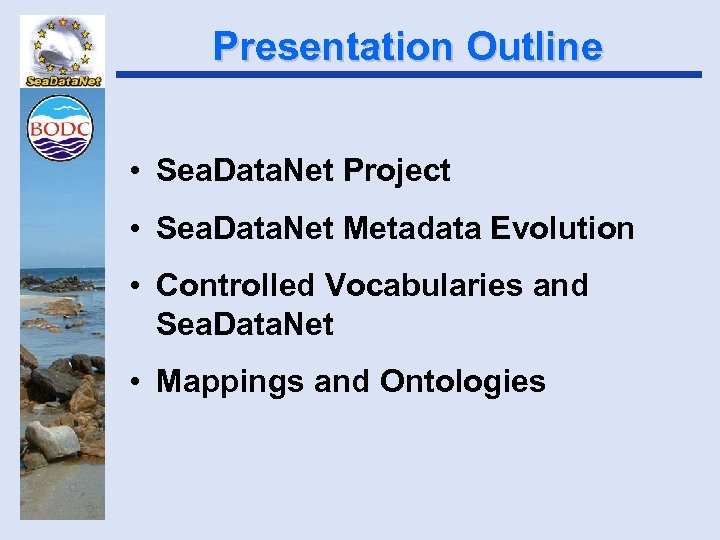 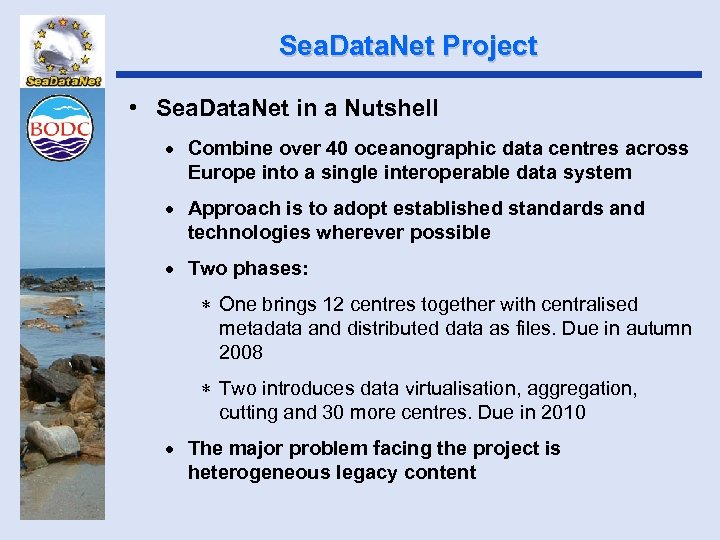 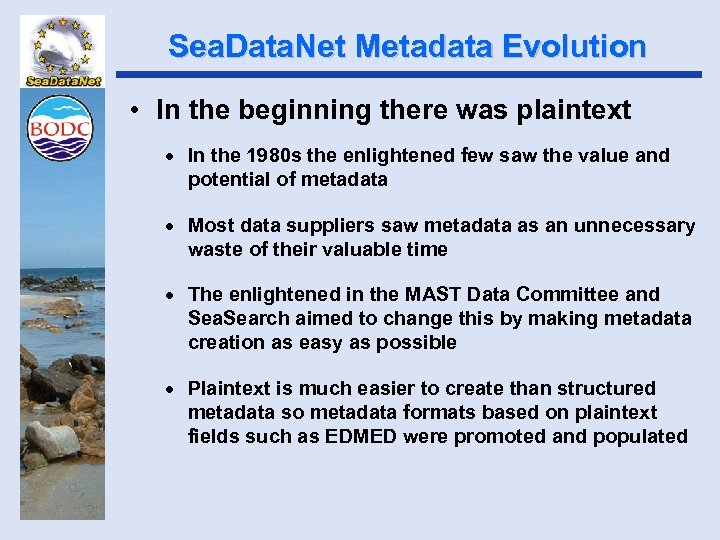 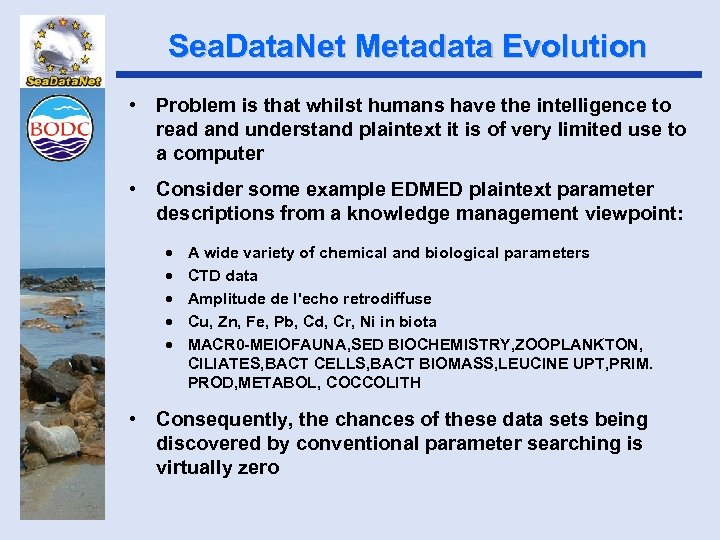 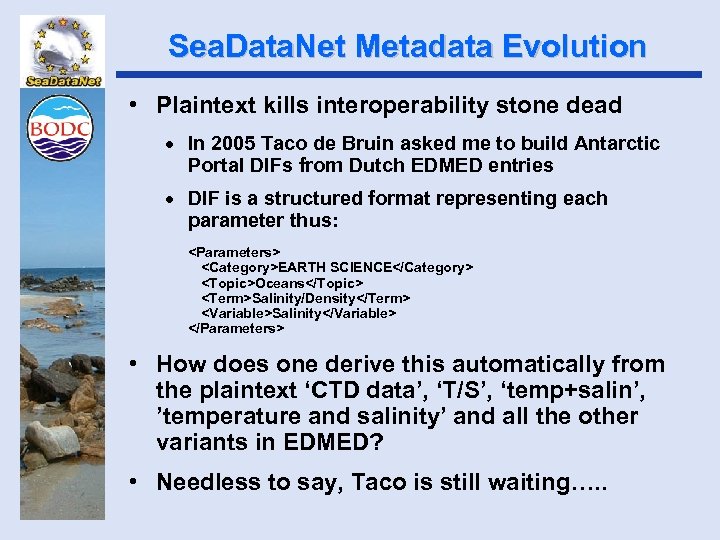 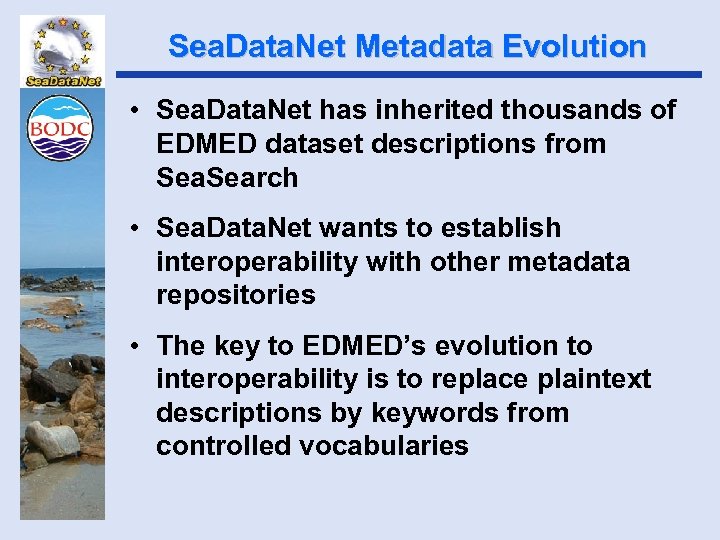 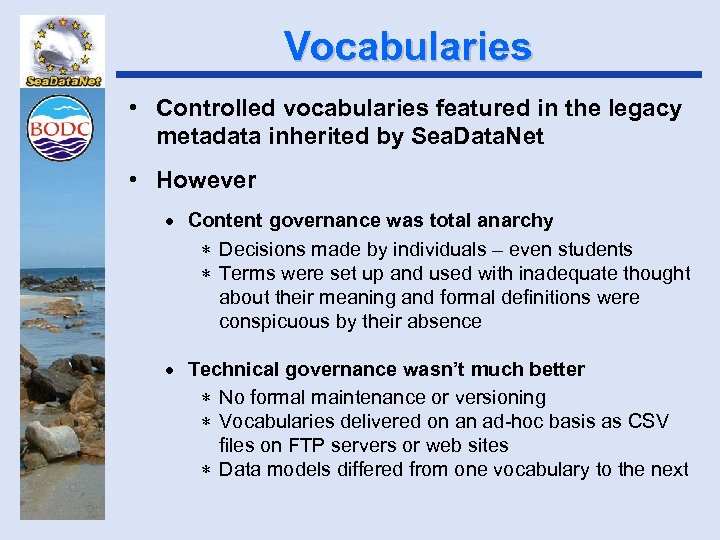 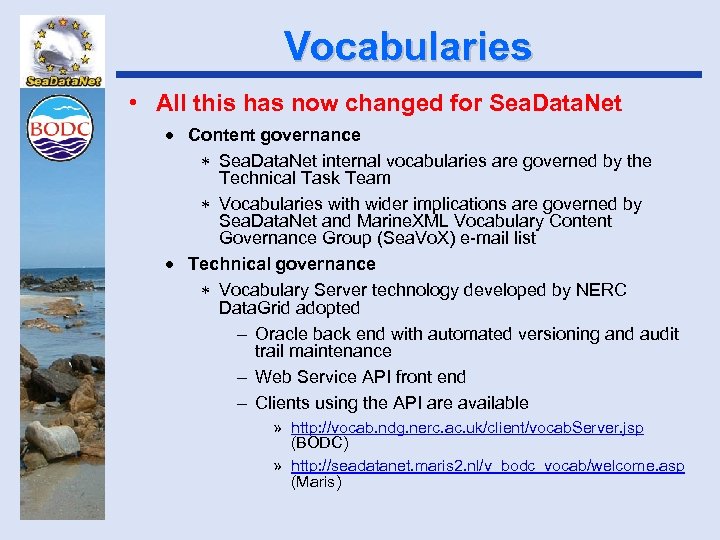 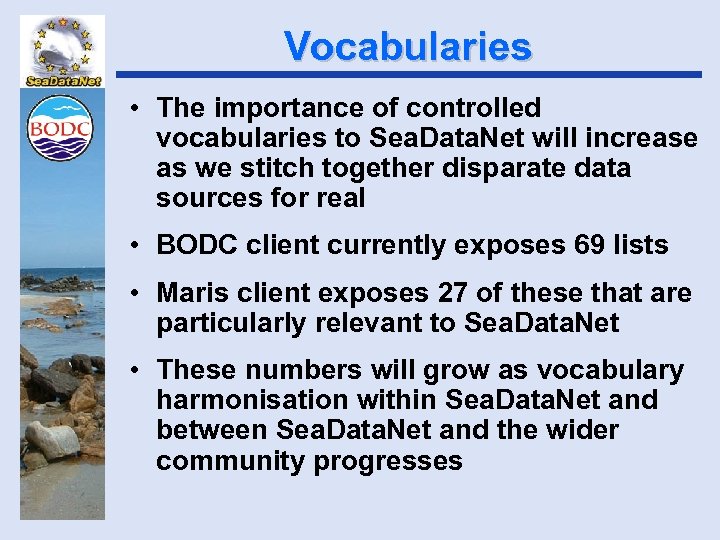 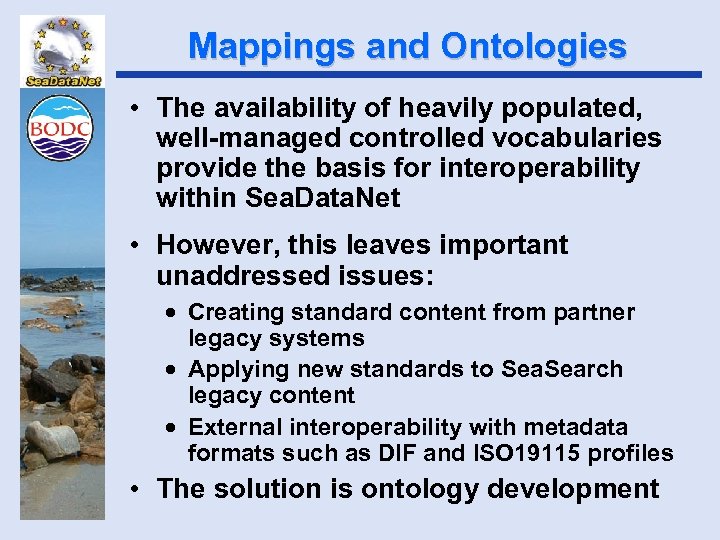 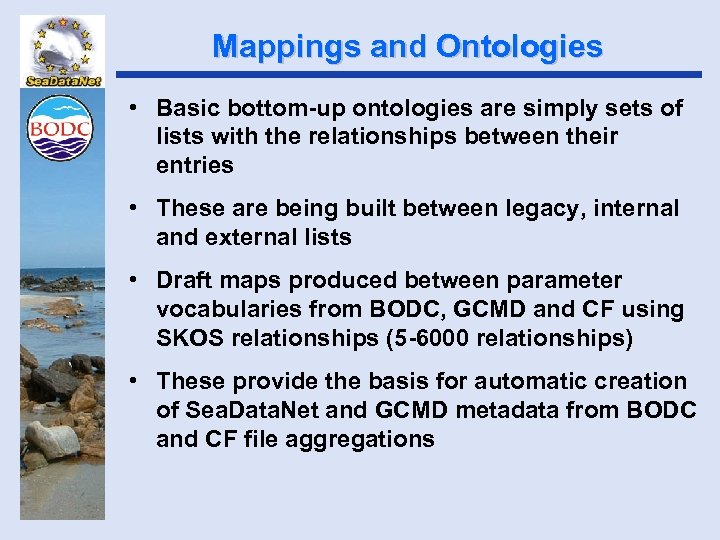 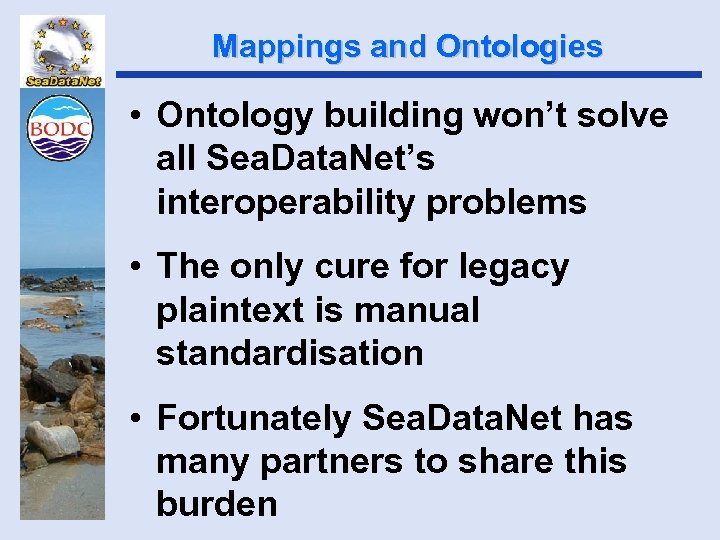 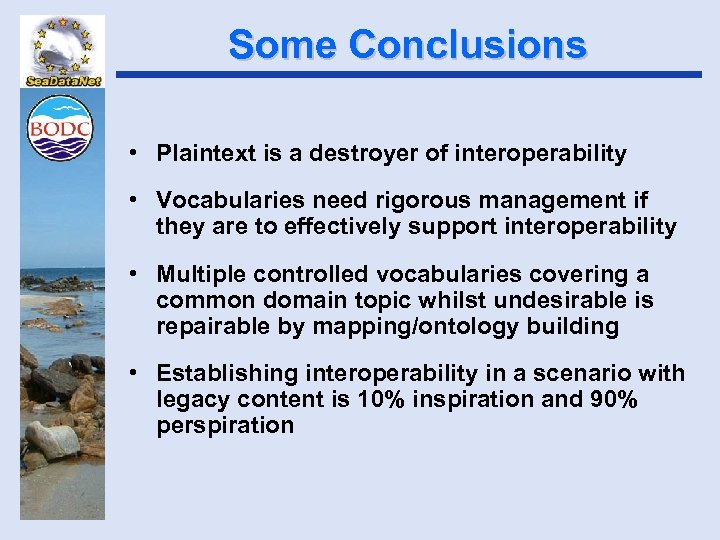 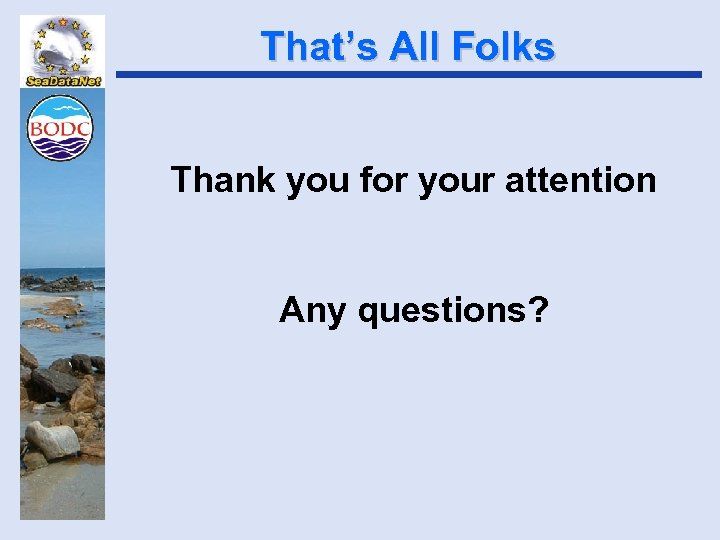 Sea. Data. Net Project • Sea. Data. Net in a Nutshell · Combine over 40 oceanographic data centres across Europe into a single interoperable data system · Approach is to adopt established standards and technologies wherever possible · Two phases: * One brings 12 centres together with centralised metadata and distributed data as files. Due in autumn 2008 * Two introduces data virtualisation, aggregation, cutting and 30 more centres. Due in 2010 · The major problem facing the project is heterogeneous legacy content

Sea. Data. Net Metadata Evolution • In the beginning there was plaintext · In the 1980 s the enlightened few saw the value and potential of metadata · Most data suppliers saw metadata as an unnecessary waste of their valuable time · The enlightened in the MAST Data Committee and Search aimed to change this by making metadata creation as easy as possible · Plaintext is much easier to create than structured metadata so metadata formats based on plaintext fields such as EDMED were promoted and populated

Sea. Data. Net Metadata Evolution • Plaintext kills interoperability stone dead · In 2005 Taco de Bruin asked me to build Antarctic Portal DIFs from Dutch EDMED entries · DIF is a structured format representing each parameter thus: • How does one derive this automatically from the plaintext ‘CTD data’, ‘T/S’, ‘temp+salin’, ’temperature and salinity’ and all the other variants in EDMED? • Needless to say, Taco is still waiting…. .

Vocabularies • Controlled vocabularies featured in the legacy metadata inherited by Sea. Data. Net • However · Content governance was total anarchy * Decisions made by individuals – even students * Terms were set up and used with inadequate thought about their meaning and formal definitions were conspicuous by their absence · Technical governance wasn’t much better * No formal maintenance or versioning * Vocabularies delivered on an ad-hoc basis as CSV files on FTP servers or web sites * Data models differed from one vocabulary to the next

Mappings and Ontologies • Basic bottom-up ontologies are simply sets of lists with the relationships between their entries • These are being built between legacy, internal and external lists • Draft maps produced between parameter vocabularies from BODC, GCMD and CF using SKOS relationships (5 -6000 relationships) • These provide the basis for automatic creation of Sea. Data. Net and GCMD metadata from BODC and CF file aggregations

Mappings and Ontologies • Ontology building won’t solve all Sea. Data. Net’s interoperability problems • The only cure for legacy plaintext is manual standardisation • Fortunately Sea. Data. Net has many partners to share this burden

That’s All Folks Thank you for your attention Any questions?