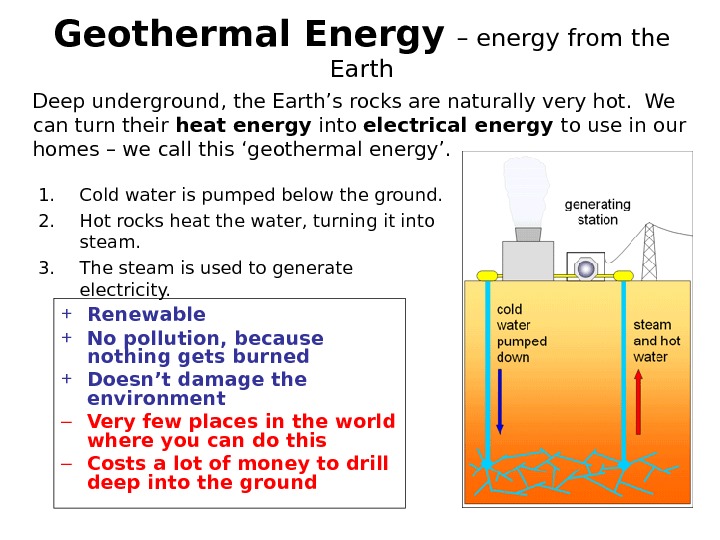 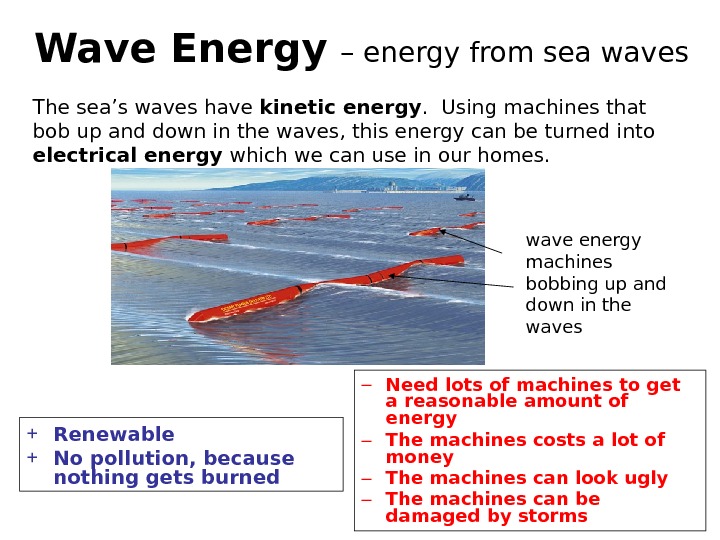 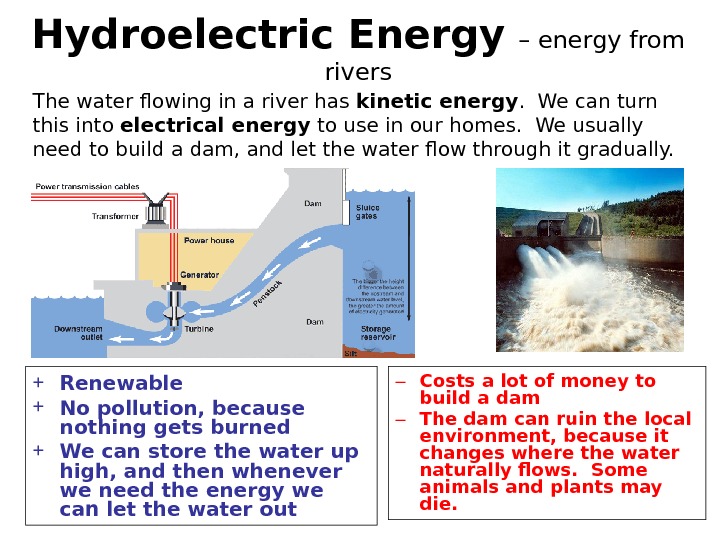 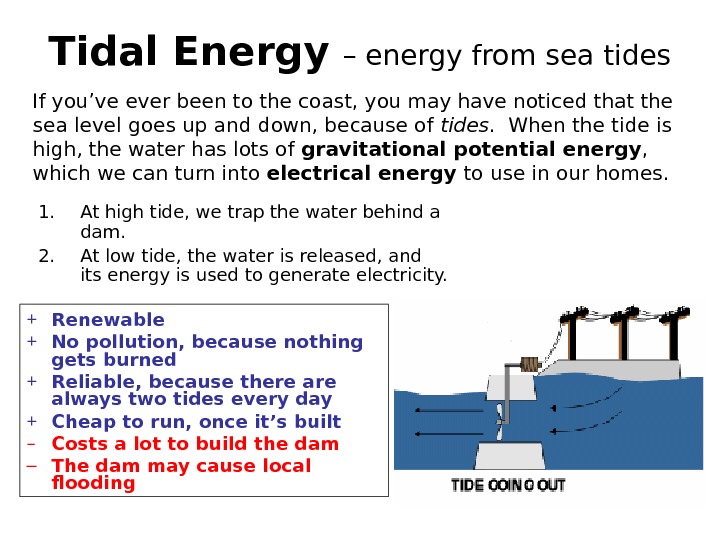 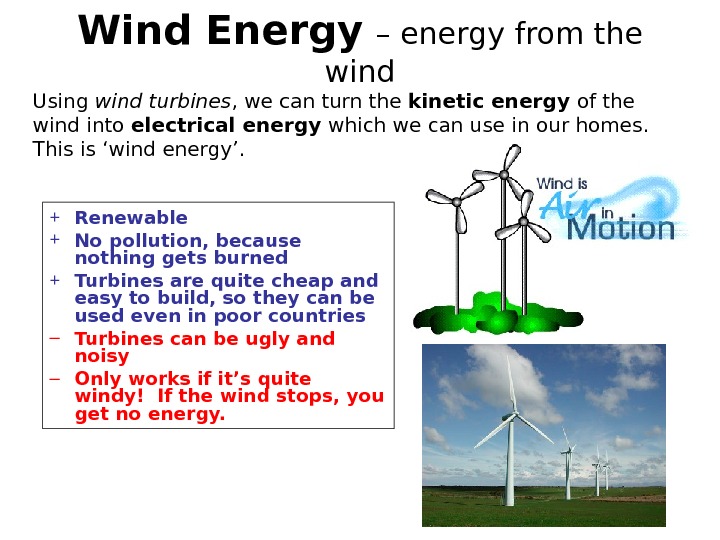 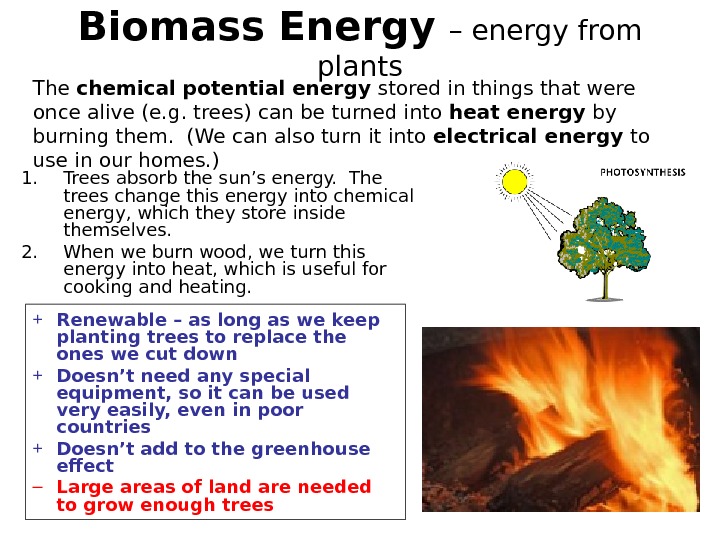 Geothermal Energy – energy from the Earth 1. Cold water is pumped below the ground. 2. Hot rocks heat the water, turning it into steam. 3. The steam is used to generate electricity. + Renewable + No pollution, because nothing gets burned + Doesn’t damage the environment – Very few places in the world where you can do this – Costs a lot of money to drill deep into the ground. Deep underground, the Earth’s rocks are naturally very hot. We can turn their heat energy into electrical energy to use in our homes – we call this ‘geothermal energy’.

Hydroelectric Energy – energy from rivers + Renewable + No pollution, because nothing gets burned + We can store the water up high, and then whenever we need the energy we can let the water out. The water flowing in a river has kinetic energy. We can turn this into electrical energy to use in our homes. We usually need to build a dam, and let the water flow through it gradually. – Costs a lot of money to build a dam – The dam can ruin the local environment, because it changes where the water naturally flows. Some animals and plants may die.

Tidal Energy – energy from sea tides 1. At high tide, we trap the water behind a dam. 2. At low tide, the water is released, and its energy is used to generate electricity. + Renewable + No pollution, because nothing gets burned + Reliable, because there always two tides every day + Cheap to run, once it’s built – Costs a lot to build the dam – The dam may cause local flooding. If you’ve ever been to the coast, you may have noticed that the sea level goes up and down, because of tides. When the tide is high, the water has lots of gravitational potential energy , which we can turn into electrical energy to use in our homes.

Solar Energy – energy from the Sun + Renewable + No pollution, because nothing gets burned – Solar cells and solar panels are expensive – Only works if it’s sunny! The Earth gets heat and light energy from the sun all the time. Can we use it – yes we can! The Sun’s energy can either be: 1. changed into electrical energy to use in homes, using solar cells ; 2. or used to heat water for homes, using solar panels.

Wind Energy – energy from the wind + Renewable + No pollution, because nothing gets burned + Turbines are quite cheap and easy to build, so they can be used even in poor countries – Turbines can be ugly and noisy – Only works if it’s quite windy! If the wind stops, you get no energy. Using wind turbines , we can turn the kinetic energy of the wind into electrical energy which we can use in our homes. This is ‘wind energy’.

Biomass Energy – energy from plants 1. Trees absorb the sun’s energy. The trees change this energy into chemical energy, which they store inside themselves. 2. When we burn wood, we turn this energy into heat, which is useful for cooking and heating. + Renewable – as long as we keep planting trees to replace the ones we cut down + Doesn’t need any special equipment, so it can be used very easily, even in poor countries + Doesn’t add to the greenhouse effect – Large areas of land are needed to grow enough trees. The chemical potential energy stored in things that were once alive (e. g. trees) can be turned into heat energy by burning them. (We can also turn it into electrical energy to use in our homes. )