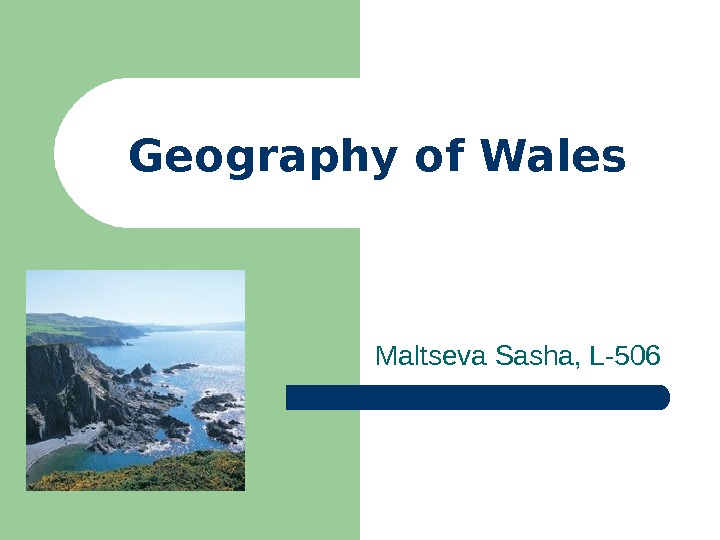 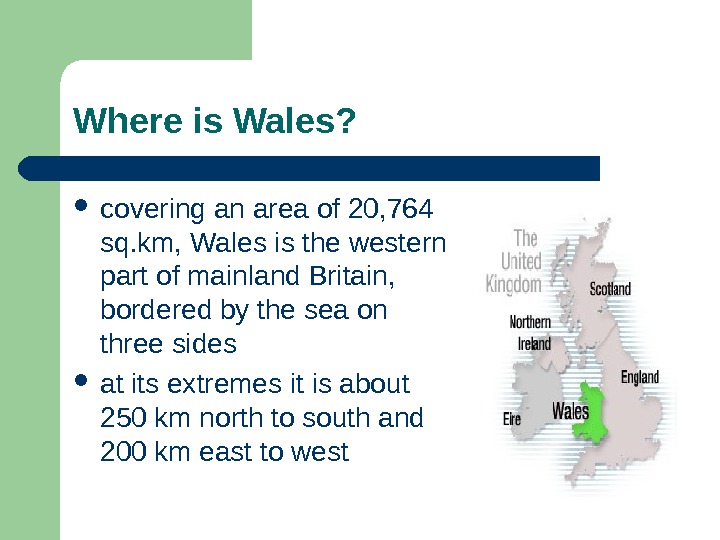 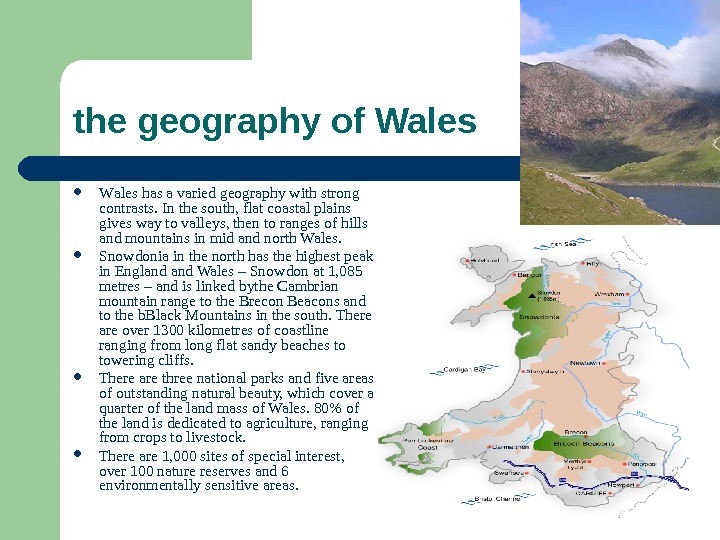 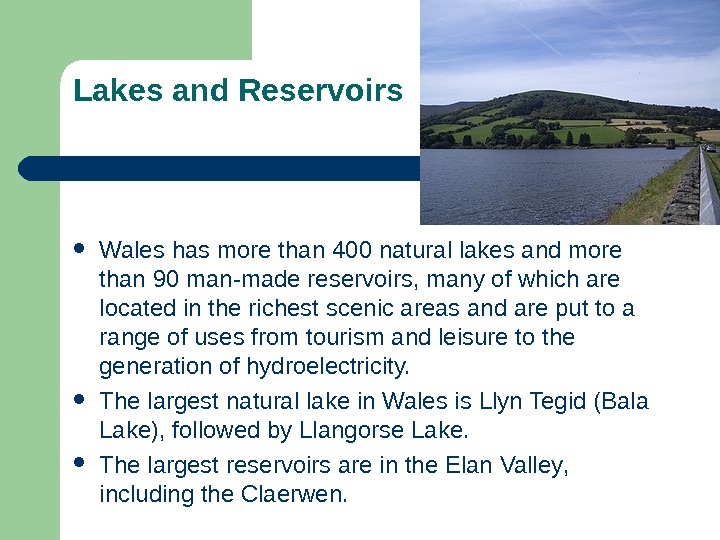 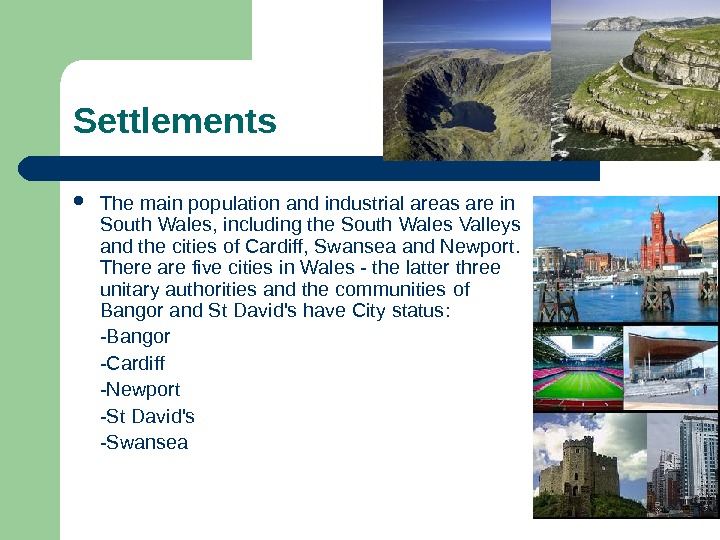 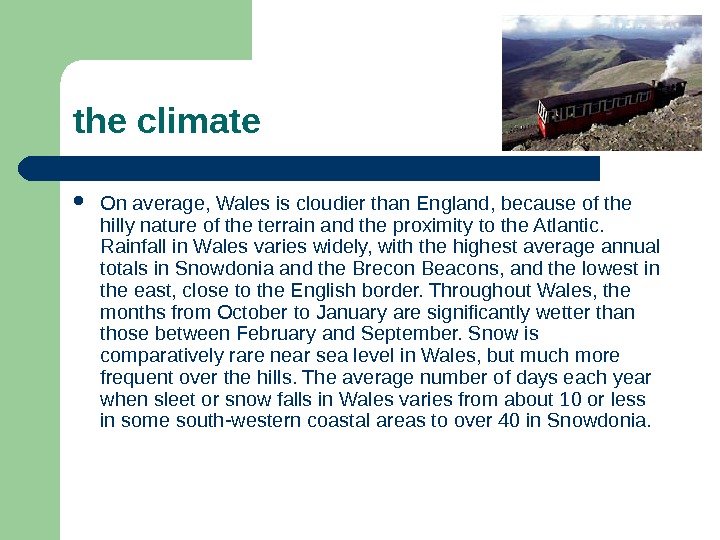 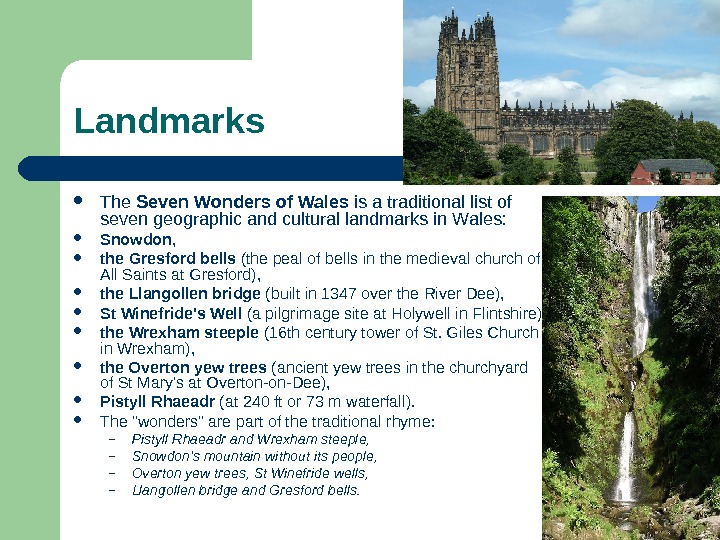 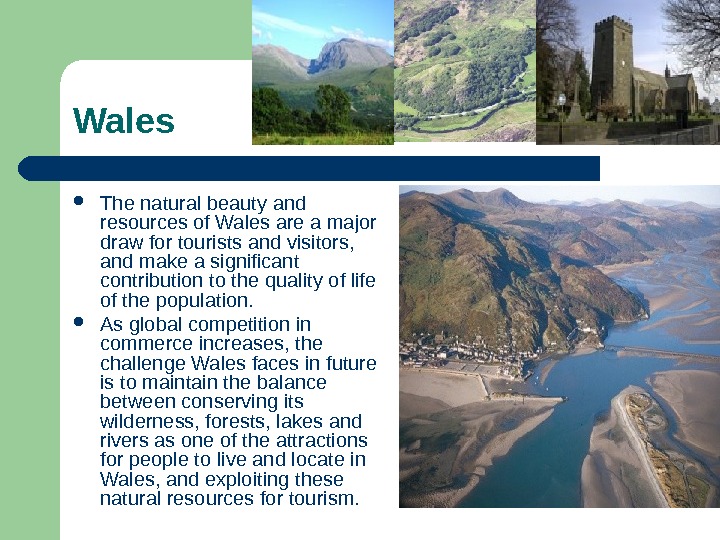 Where is Wales? covering an area of 20, 764 sq. km, Wales is the western part of mainland Britain, bordered by the sea on three sides at its extremes it is about 250 km north to south and 200 km east to west

the geography of Wales W ales has a varied geography with strong contrasts. In the south, flat coastal plains gives way to valleys, then to ranges of hills and mountains in mid and north Wales. Snowdonia in the north has the highest peak in England Wales – Snowdon at 1, 085 metres – and is linked bythe Cambrian mountain range to the Brecon Beacons and to the b. Black Mountains in the south. There are over 1300 kilometres of coastline ranging from long flat sandy beaches to towering cliffs. There are three national parks and five areas of outstanding natural beauty, which cover a quarter of the land mass of Wales. 80% of the land is dedicated to agriculture, ranging from crops to livestock. There are 1, 000 sites of special interest, over 100 nature reserves and 6 environmentally sensitive areas.

Lakes and Reservoirs Wales has more than 400 natural lakes and more than 90 man-made reservoirs, many of which are located in the richest scenic areas and are put to a range of uses from tourism and leisure to the generation of hydroelectricity. The largest natural lake in Wales is Llyn Tegid (Bala Lake), followed by Llangorse Lake. The largest reservoirs are in the Elan Valley , including the Claerwen.

Settlements The main population and industrial areas are in South Wales , including the South Wales Valleys and the cities of Cardiff , Swansea and Newport. There are five cities in Wales — the latter three unitary authorities and the communities of Bangor and St David’s have City status : — Bangor — Cardiff — Newport — St David’s — Swansea

the climate On average, Wales is cloudier than England, because of the hilly nature of the terrain and the proximity to the Atlantic. Rainfall in Wales varies widely, with the highest average annual totals in Snowdonia and the Brecon Beacons, and the lowest in the east, close to the English border. Throughout Wales, the months from October to January are significantly wetter than those between February and September. Snow is comparatively rare near sea level in Wales, but much more frequent over the hills. The average number of days each year when sleet or snow falls in Wales varies from about 10 or less in some south-western coastal areas to over 40 in Snowdonia.

Landmarks The Seven Wonders of Wales is a traditional list of seven geographic and cultural landmarks in Wales: Snowdon , the Gresford bells (the peal of bells in the medieval church of All Saints at Gresford ), the Llangollen bridge (built in 1347 over the River Dee ), St Winefride’s Well (a pilgrimage site at Holywell in Flintshire ) the Wrexham steeple (16 th century tower of St. Giles Church in Wrexham ), the Overton yew trees (ancient yew trees in the churchyard of St Mary’s at Overton-on-Dee ) , Pistyll Rhaeadr (at 240 ft or 73 m waterfall ). The «wonders» are part of the traditional rhyme: – Pistyll Rhaeadr and Wrexham steeple, – Snowdon’s mountain without its people, – Overton yew trees, St Winefride wells, – Llangollen bridge and Gresford bells.

Wales The natural beauty and resources of Wales are a major draw for tourists and visitors, and make a significant contribution to the quality of life of the population. As global competition in commerce increases, the challenge Wales faces in future is to maintain the balance between conserving its wilderness, forests, lakes and rivers as one of the attractions for people to live and locate in Wales, and exploiting these natural resources for tourism.