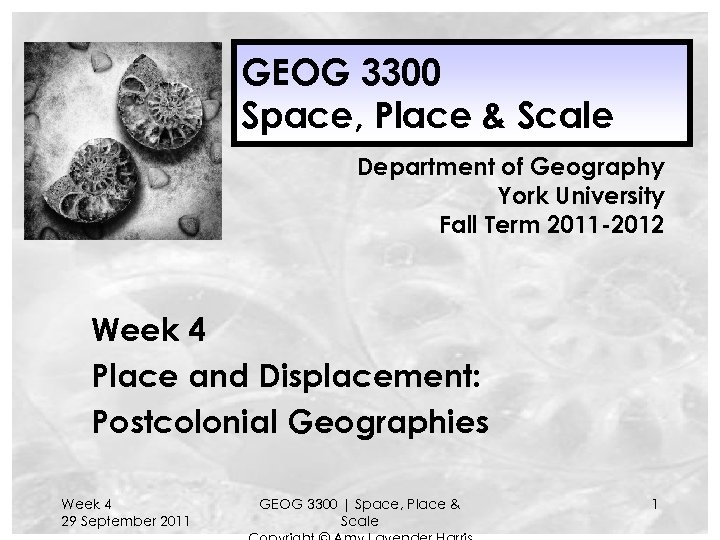 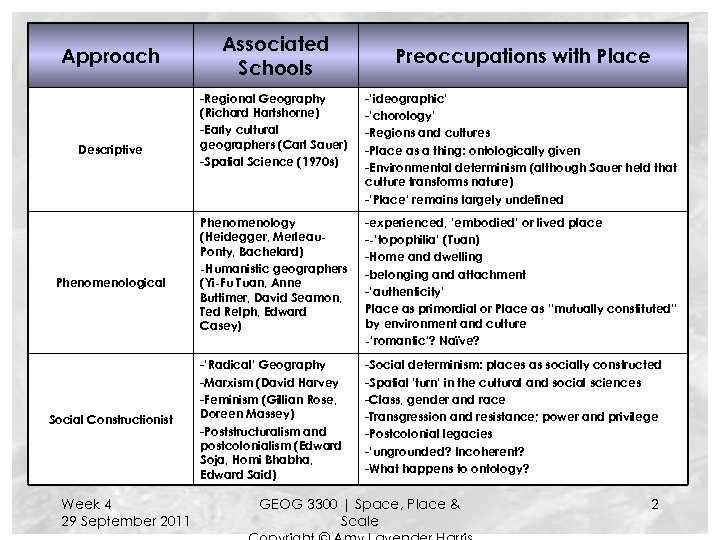 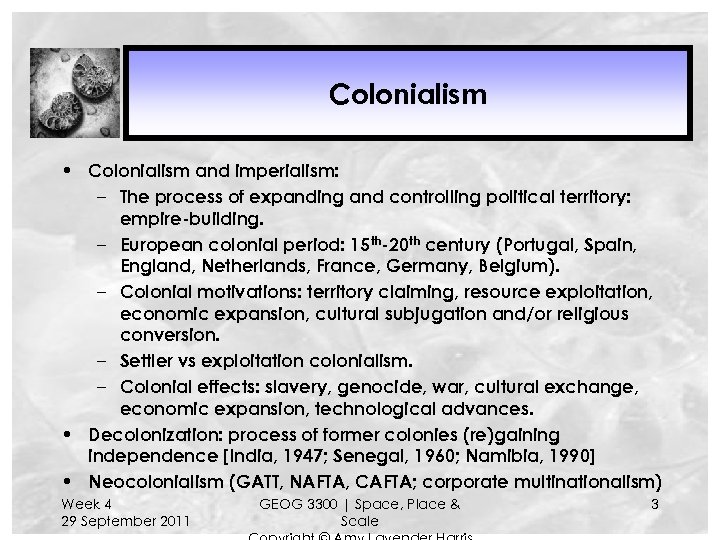 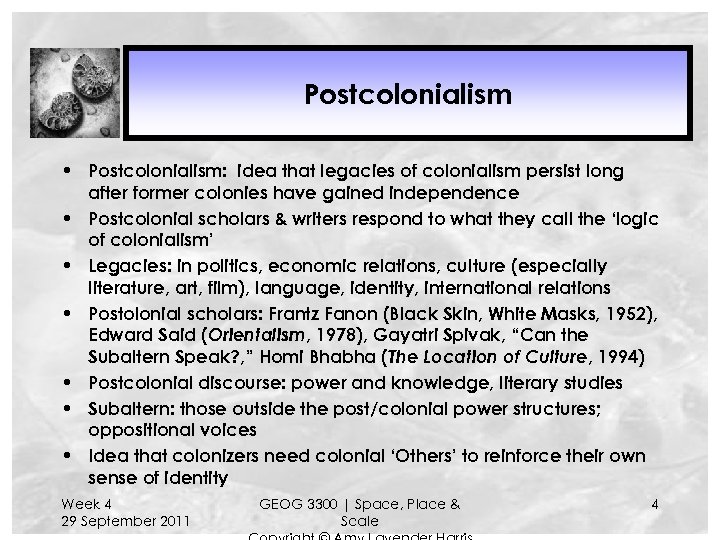 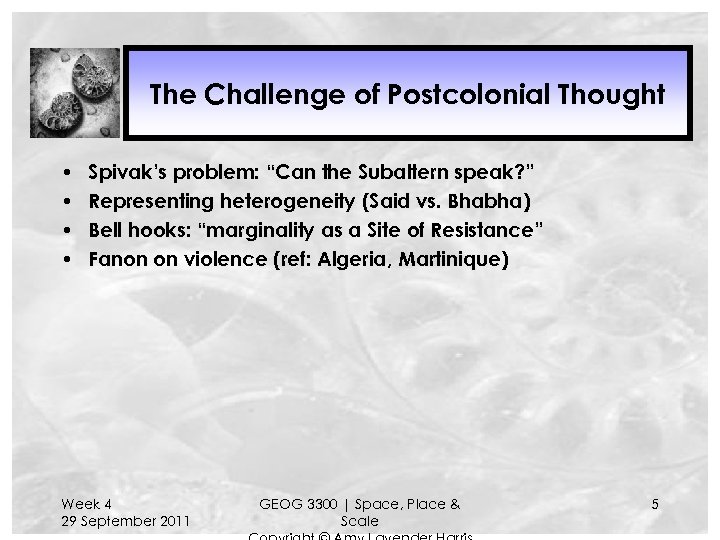 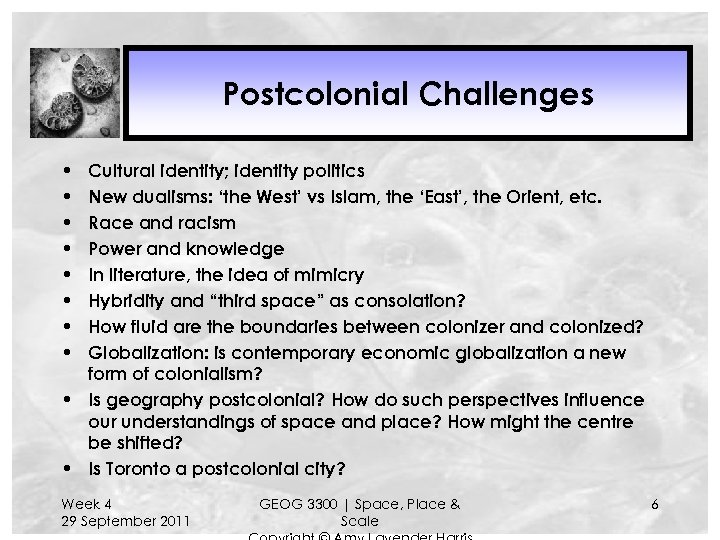 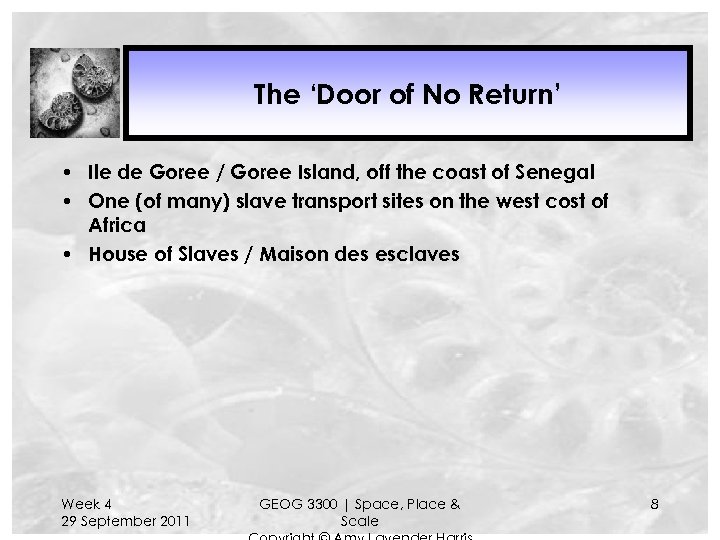 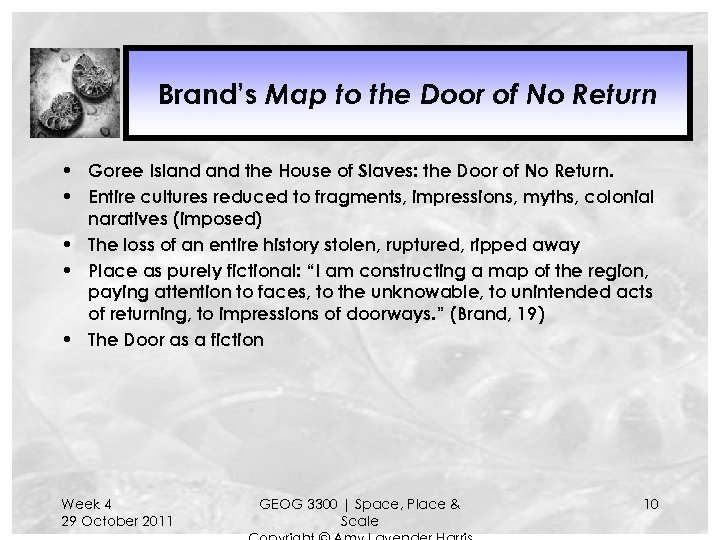 Postcolonial Challenges • • Cultural identity; identity politics New dualisms: ‘the West’ vs Islam, the ‘East’, the Orient, etc. Race and racism Power and knowledge In literature, the idea of mimicry Hybridity and “third space” as consolation? How fluid are the boundaries between colonizer and colonized? Globalization: is contemporary economic globalization a new form of colonialism? • Is geography postcolonial? How do such perspectives influence our understandings of space and place? How might the centre be shifted? • Is Toronto a postcolonial city? Week 4 29 September 2011 GEOG 3300 | Space, Place & Scale 6

No History of Colonialism in Canada? "We are one of the most stable regimes in history. . We are unique in that regard … We also have no history of colonialism. So we have all of the things that many people admire about the great powers but none of the things that threaten or bother them. “ [Canadian Prime Minister Stephen Harper on Canada, comment made at 2009 G 20 Summit in Pittsburgh. Source: http: //www. reuters. com/article/GCAG 20 Pittsburgh/id. USTRE 58 P 05 Z 20090926] Week 4 29 September 2011 GEOG 3300 | Space, Place & Scale 7

Brand’s Map to the Door of No Return • Goree Island the House of Slaves: the Door of No Return. • Entire cultures reduced to fragments, impressions, myths, colonial naratives (imposed) • The loss of an entire history stolen, ruptured, ripped away • Place as purely fictional: “I am constructing a map of the region, paying attention to faces, to the unknowable, to unintended acts of returning, to impressions of doorways. ” (Brand, 19) • The Door as a fiction Week 4 29 October 2011 GEOG 3300 | Space, Place & Scale 10

The Map that Roared • Matthew Sparke on The ‘map that roared’: critical cartographies and postcolonial interpretations of place • Sparke describes a native land claim trial and The Historical Atlas of Canada as “cartographic negotiations of the meanings of space, territory, and state jurisdiction. ” • Hegemonic and counterhegemonic tensions: relations of power are inherent in all places and in all acts of placemaking • Postcolonial theory and colonial legacies • Derrida (indirectly), Edward Said, Homi Bhabha Week 4 29 October 2011 GEOG 3300 | Space, Place & Scale 11