Generation in computer terminology is a 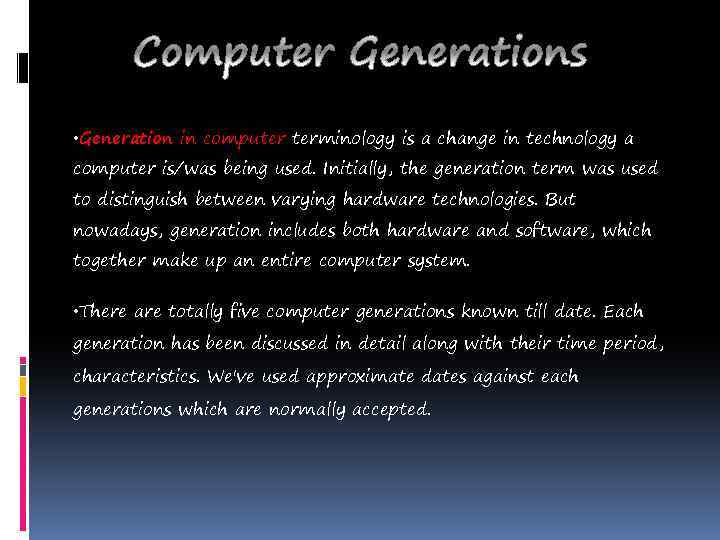 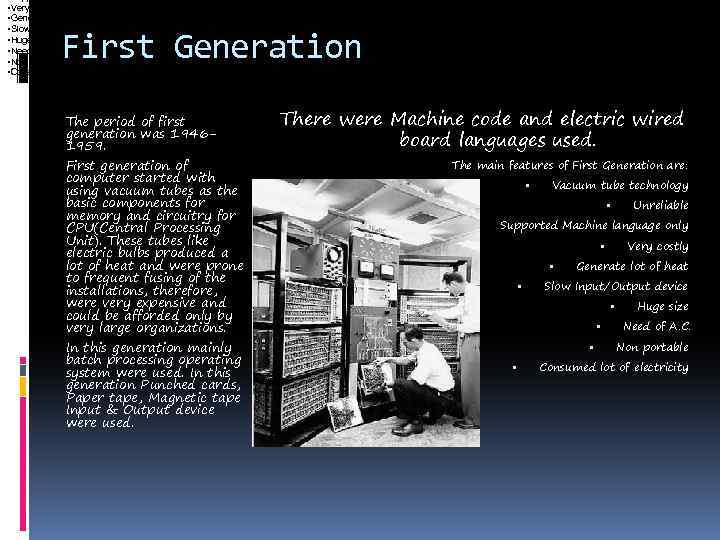 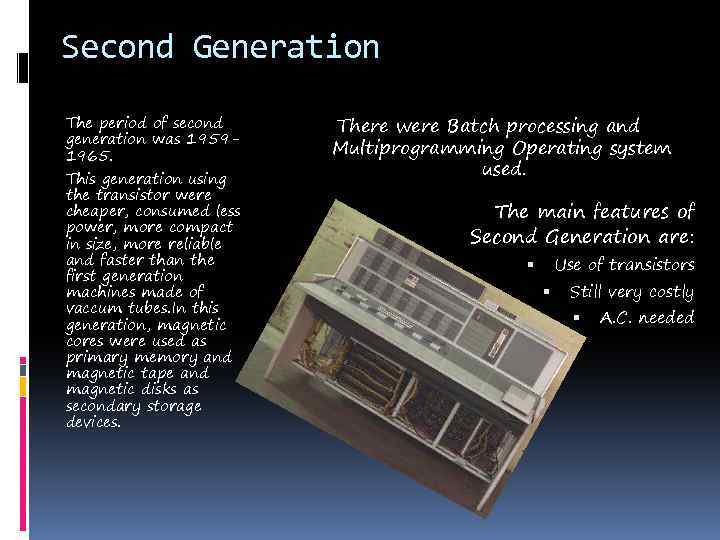 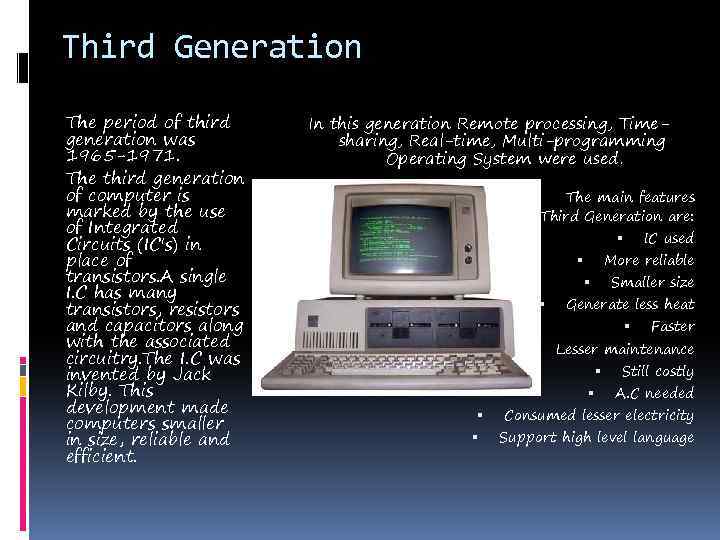 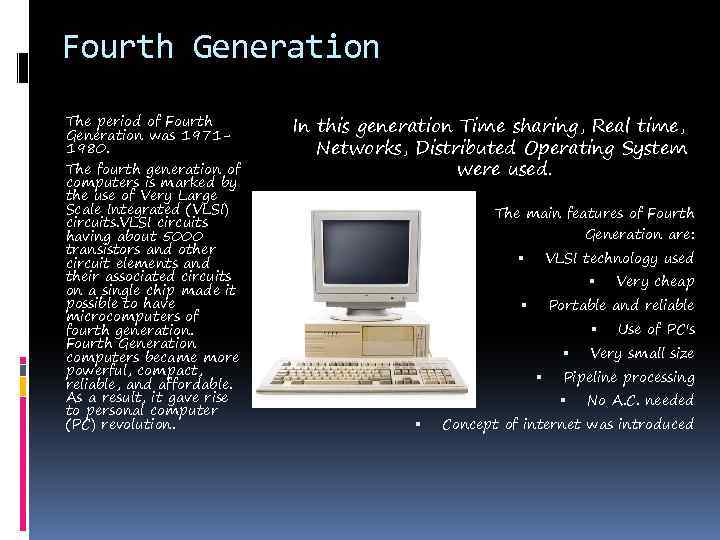 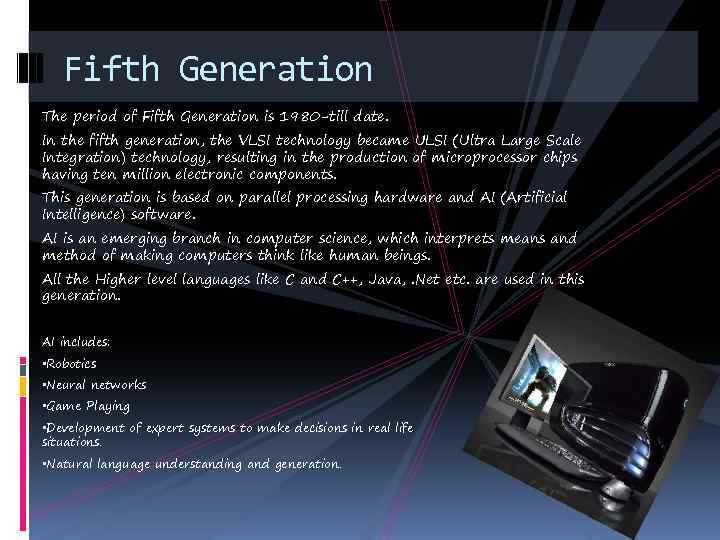 Скачать презентацию Generation in computer terminology is a

• Generation in computer terminology is a change in technology a computer is/was being used. Initially, the generation term was used to distinguish between varying hardware technologies. But nowadays, generation includes both hardware and software, which together make up an entire computer system. • There are totally five computer generations known till date. Each generation has been discussed in detail along with their time period, characteristics. We've used approximate dates against each generations which are normally accepted.

Second Generation The period of second generation was 19591965. This generation using the transistor were cheaper, consumed less power, more compact in size, more reliable and faster than the first generation machines made of vaccum tubes. In this generation, magnetic cores were used as primary memory and magnetic tape and magnetic disks as secondary storage devices. There were Batch processing and Multiprogramming Operating system used. The main features of Second Generation are: Use of transistors Still very costly A. C. needed

Third Generation The period of third generation was 1965 -1971. The third generation of computer is marked by the use of Integrated Circuits (IC's) in place of transistors. A single I. C has many transistors, resistors and capacitors along with the associated circuitry. The I. C was invented by Jack Kilby. This development made computers smaller in size, reliable and efficient. In this generation Remote processing, Timesharing, Real-time, Multi-programming Operating System were used. The main features of Third Generation are: IC used More reliable Smaller size Generate less heat Lesser maintenance Faster Still costly A. C needed Consumed lesser electricity Support high level language

Fourth Generation The period of Fourth Generation was 19711980. The fourth generation of computers is marked by the use of Very Large Scale Integrated (VLSI) circuits. VLSI circuits having about 5000 transistors and other circuit elements and their associated circuits on a single chip made it possible to have microcomputers of fourth generation. Fourth Generation computers became more powerful, compact, reliable, and affordable. As a result, it gave rise to personal computer (PC) revolution. In this generation Time sharing, Real time, Networks, Distributed Operating System were used. The main features of Fourth Generation are: VLSI technology used Portable and reliable Use of PC's Very small size Pipeline processing Very cheap No A. C. needed Concept of internet was introduced

Fifth Generation The period of Fifth Generation is 1980 -till date. In the fifth generation, the VLSI technology became ULSI (Ultra Large Scale Integration) technology, resulting in the production of microprocessor chips having ten million electronic components. This generation is based on parallel processing hardware and AI (Artificial Intelligence) software. AI is an emerging branch in computer science, which interprets means and method of making computers think like human beings. All the Higher level languages like C and C++, Java, . Net etc. are used in this generation. AI includes: • Robotics • Neural networks • Game Playing • Development of expert systems to make decisions in real life situations. • Natural language understanding and generation.

Terminology studies as a science 1930 s