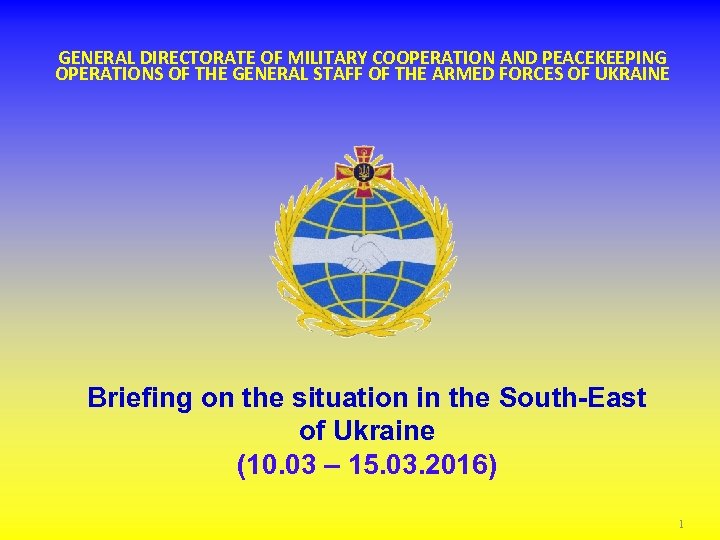 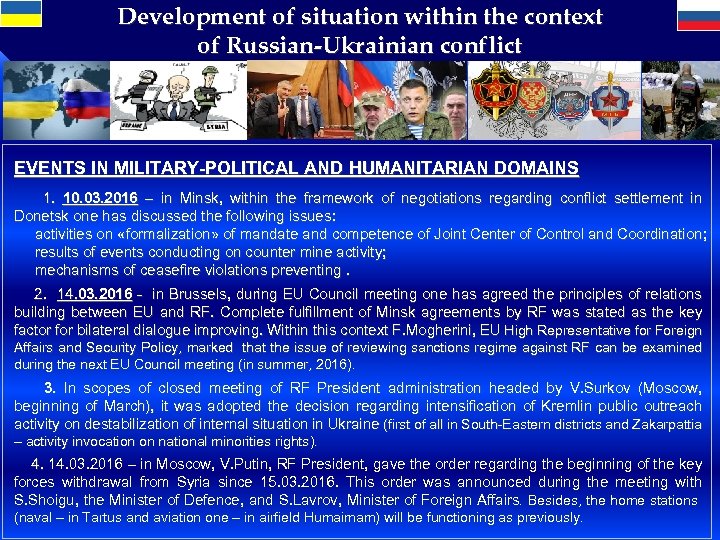 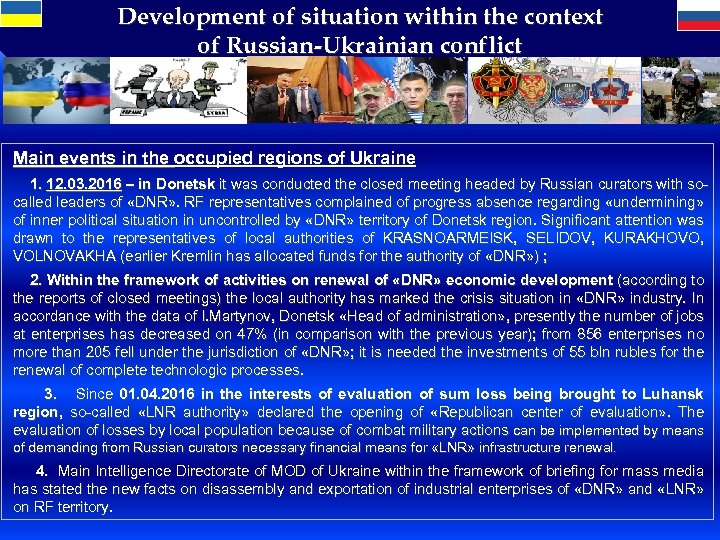 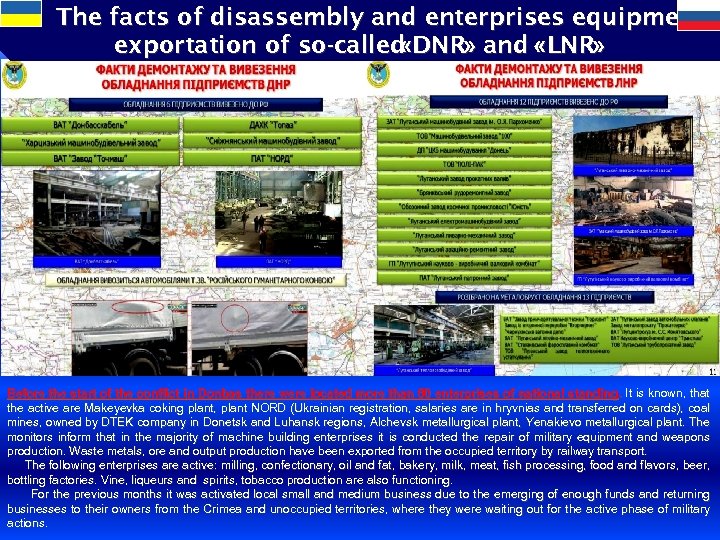 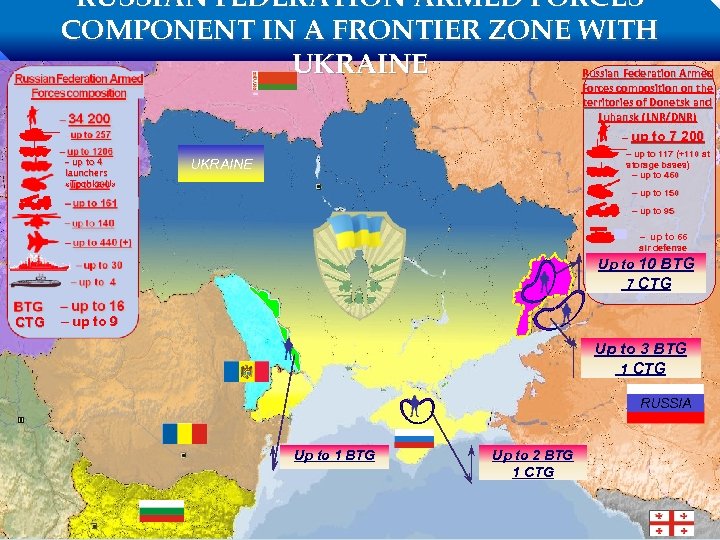 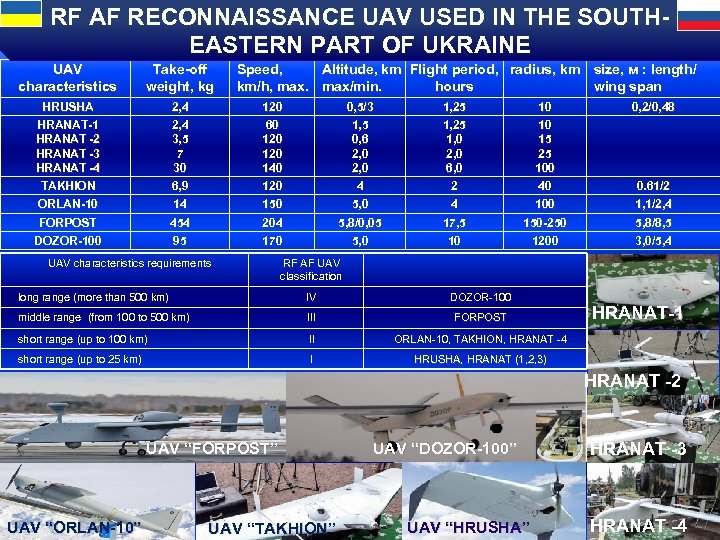 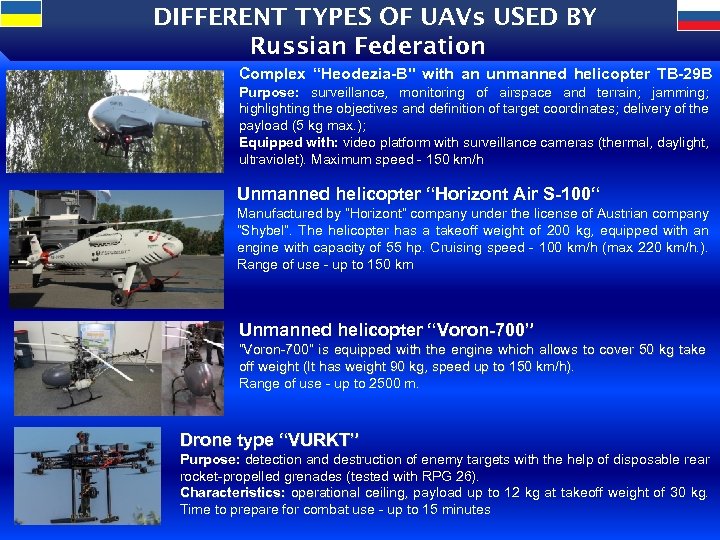 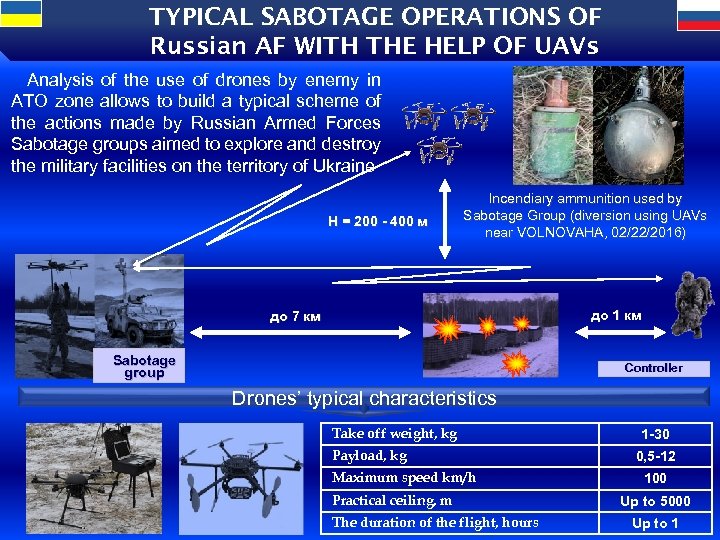 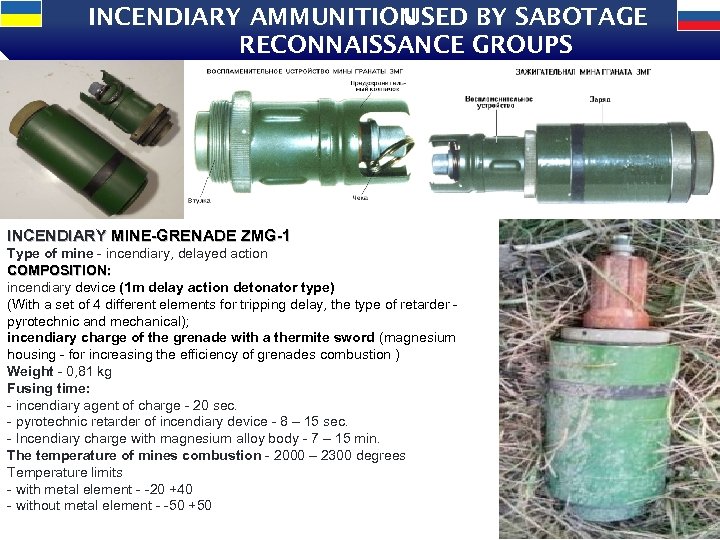 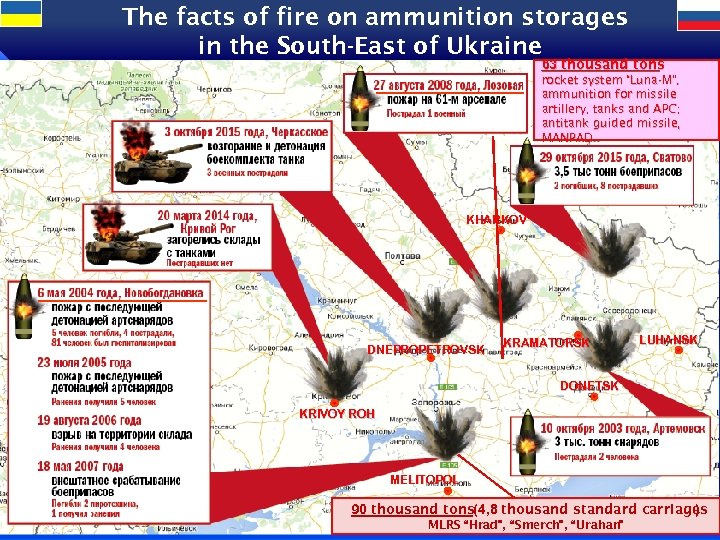 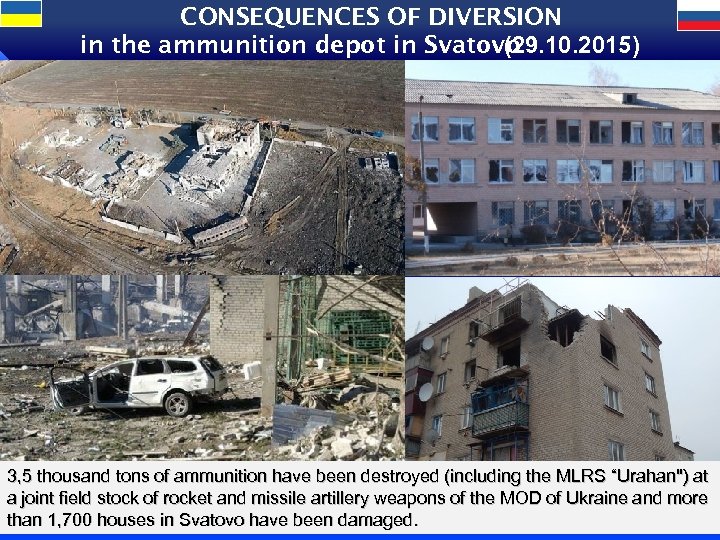 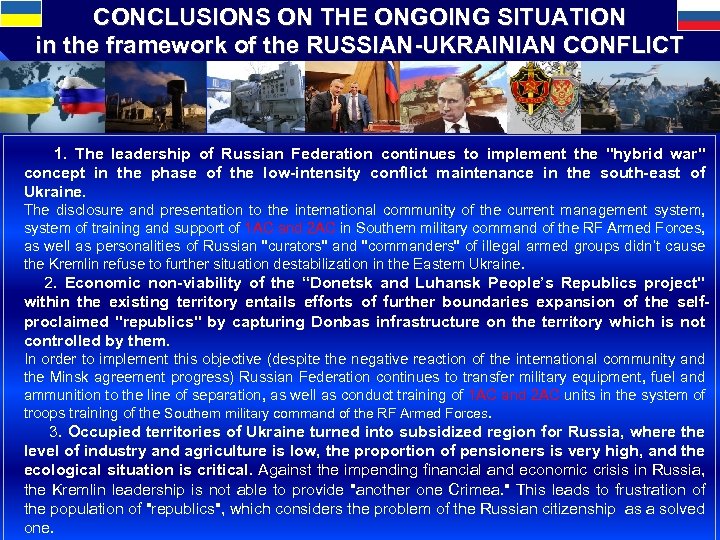 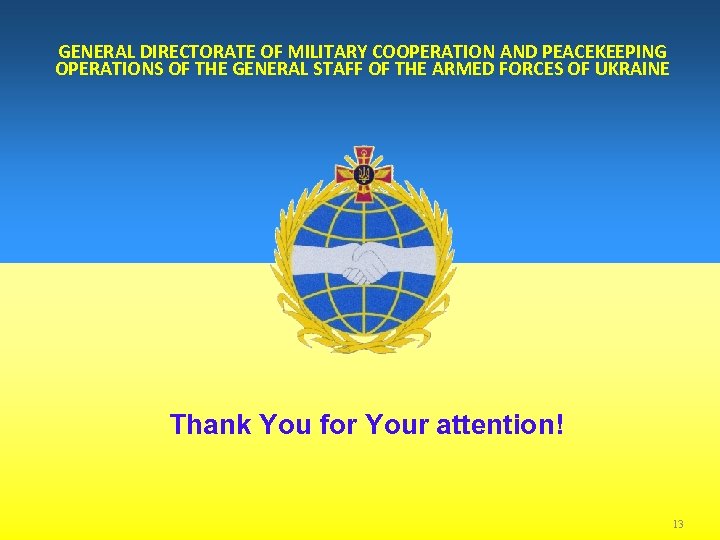 GENERAL DIRECTORATE OF MILITARY COOPERATION AND PEACEKEEPING OPERATIONS OF THE GENERAL STAFF OF THE ARMED FORCES OF UKRAINE Briefing on the situation in the South-East of Ukraine (10. 03 – 15. 03. 2016) 1

Development of situation within the context of Russian-Ukrainian conflict EVENTS IN MILITARY-POLITICAL AND HUMANITARIAN DOMAINS 1. 10. 03. 2016 – in Minsk, within the framework of negotiations regarding conflict settlement in Donetsk one has discussed the following issues: activities on «formalization» of mandate and competence of Joint Center of Control and Coordination; results of events conducting on counter mine activity; mechanisms of ceasefire violations preventing. 2. 14. 03. 2016 - in Brussels, during EU Council meeting one has agreed the principles of relations building between EU and RF. Complete fulfillment of Minsk agreements by RF was stated as the key factor for bilateral dialogue improving. Within this context F. Mogherini, EU High Representative for Foreign Affairs and Security Policy, marked that the issue of reviewing sanctions regime against RF can be examined during the next EU Council meeting (in summer, 2016). 3. In scopes of closed meeting of RF President administration headed by V. Surkov (Moscow, beginning of March), it was adopted the decision regarding intensification of Kremlin public outreach activity on destabilization of internal situation in Ukraine (first of all in South-Eastern districts and Zakarpattia – activity invocation on national minorities rights). 4. 14. 03. 2016 – in Moscow, V. Putin, RF President, gave the order regarding the beginning of the key 4. forces withdrawal from Syria since 15. 03. 2016. This order was announced during the meeting with S. Shoigu, the Minister of Defence, and S. Lavrov, Minister of Foreign Affairs. Besides, the home stations (naval – in Tartus and aviation one – in airfield Humaimam) will be functioning as previously.

Development of situation within the context of Russian-Ukrainian conflict Main events in the occupied regions of Ukraine 1. 12. 03. 2016 – in Donetsk it was conducted the closed meeting headed by Russian curators with socalled leaders of «DNR» . RF representatives complained of progress absence regarding «undermining» of inner political situation in uncontrolled by «DNR» territory of Donetsk region. Significant attention was drawn to the representatives of local authorities of KRASNOARMEISK, SELIDOV, KURAKHOVO, VOLNOVAKHA (earlier Kremlin has allocated funds for the authority of «DNR» ) ; 2. Within the framework of activities on renewal of «DNR» economic development (according to the reports of closed meetings) the local authority has marked the crisis situation in «DNR» industry. In accordance with the data of I. Martynov, Donetsk «Head of administration» , presently the number of jobs at enterprises has decreased on 47% (in comparison with the previous year); from 856 enterprises no more than 205 fell under the jurisdiction of «DNR» ; it is needed the investments of 55 bln rubles for the renewal of complete technologic processes. 3. Since 01. 04. 2016 in the interests of evaluation of sum loss being brought to Luhansk region, so-called «LNR authority» declared the opening of «Republican center of evaluation» . The evaluation of losses by local population because of combat military actions can be implemented by means of demanding from Russian curators necessary financial means for «LNR» infrastructure renewal. 4. Main Intelligence Directorate of MOD of Ukraine within the framework of briefing for mass media has stated the new facts on disassembly and exportation of industrial enterprises of «DNR» and «LNR» on RF territory.

DIFFERENT TYPES OF UAVs USED BY Russian Federation Complex “Heodezia-B" with an unmanned helicopter TB-29 B Purpose: surveillance, monitoring of airspace and terrain; jamming; highlighting the objectives and definition of target coordinates; delivery of the payload (5 kg max. ); Equipped with: video platform with surveillance cameras (thermal, daylight, ultraviolet). Maximum speed - 150 km/h Unmanned helicopter “Horizont Air S-100“ Manufactured by “Horizont” company under the license of Austrian company “Shybel”. The helicopter has a takeoff weight of 200 kg, equipped with an engine with capacity of 55 hp. Cruising speed - 100 km/h (max 220 km/h. ). Range of use - up to 150 km Unmanned helicopter “Voron-700” is equipped with the engine which allows to cover 50 kg take off weight (It has weight 90 kg, speed up to 150 km/h). 150 Range of use - up to 2500 m. Drone type “VURKT” Purpose: detection and destruction of enemy targets with the help of disposable rear rocket-propelled grenades (tested with RPG 26). Characteristics: operational ceiling, payload up to 12 kg at takeoff weight of 30 kg. , Time to prepare for combat use - up to 15 minutes

TYPICAL SABOTAGE OPERATIONS OF Russian AF WITH THE HELP OF UAVs Analysis of the use of drones by enemy in ATO zone allows to build a typical scheme of the actions made by Russian Armed Forces Sabotage groups aimed to explore and destroy the military facilities on the territory of Ukraine H = 200 - 400 м Incendiary ammunition used by Sabotage Group (diversion using UAVs near VOLNOVAHA, 02/22/2016) до 1 км до 7 км Sabotage group Controller Drones’ typical characteristics Take off weight, kg Payload, kg Maximum speed km/h Practical ceiling, m The duration of the flight, hours 1 -30 0, 5 -12 100 Up to 5000 Up to 1

CONSEQUENCES OF DIVERSION in the ammunition depot in Svatovo (29. 10. 2015) 3 3, 5 thousand tons of ammunition have been destroyed (including the MLRS “Urahan") at a joint field stock of rocket and missile artillery weapons of the MOD of Ukraine and more than 1, 700 houses in Svatovo have been damaged.

CONCLUSIONS ON THE ONGOING SITUATION in the framework of the RUSSIAN-UKRAINIAN CONFLICT 1. The leadership of Russian Federation continues to implement the "hybrid war" concept in the phase of the low-intensity conflict maintenance in the south-east of Ukraine. The disclosure and presentation to the international community of the current management system, system of training and support of 1 AC and 2 AC in Southern military command of the RF Armed Forces, as well as personalities of Russian "curators" and "commanders" of illegal armed groups didn’t cause the Kremlin refuse to further situation destabilization in the Eastern Ukraine. 2. Economic non-viability of the “Donetsk and Luhansk People’s Republics project" within the existing territory entails efforts of further boundaries expansion of the selfproclaimed "republics" by capturing Donbas infrastructure on the territory which is not controlled by them. In order to implement this objective (despite the negative reaction of the international community and the Minsk agreement progress) Russian Federation continues to transfer military equipment, fuel and ammunition to the line of separation, as well as conduct training of 1 AC and 2 AC units in the system of troops training of the Southern military command of the RF Armed Forces. 3. Occupied territories of Ukraine turned into subsidized region for Russia, where the level of industry and agriculture is low, the proportion of pensioners is very high, and the ecological situation is critical. Against the impending financial and economic crisis in Russia, the Kremlin leadership is not able to provide "another one Crimea. " This leads to frustration of the population of "republics", which considers the problem of the Russian citizenship as a solved one.

GENERAL DIRECTORATE OF MILITARY COOPERATION AND PEACEKEEPING OPERATIONS OF THE GENERAL STAFF OF THE ARMED FORCES OF UKRAINE Thank You for Your attention! 13