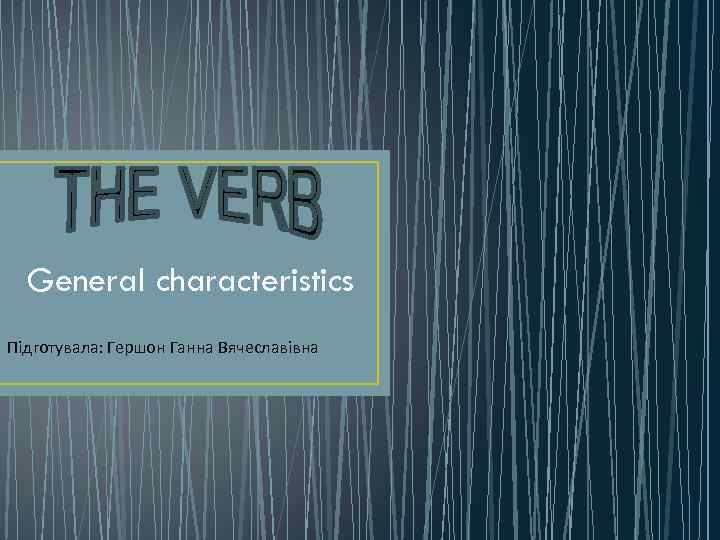 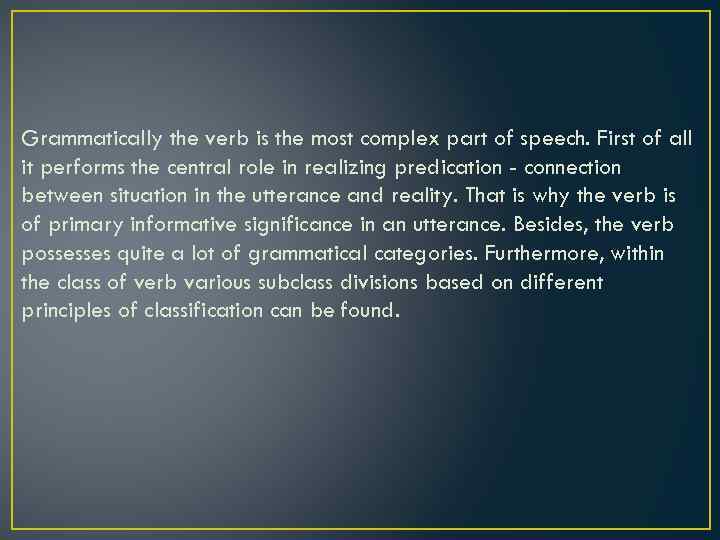 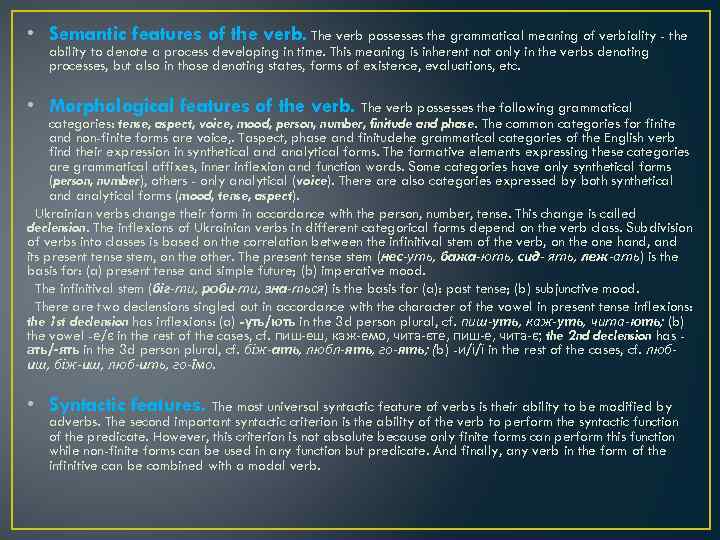 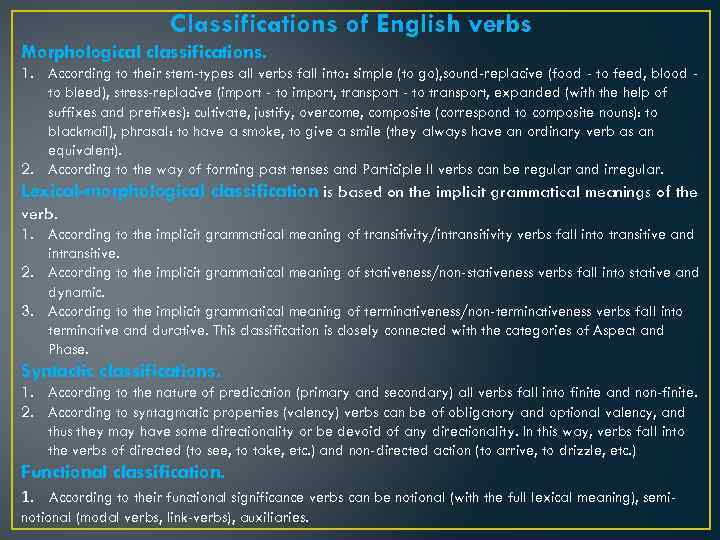 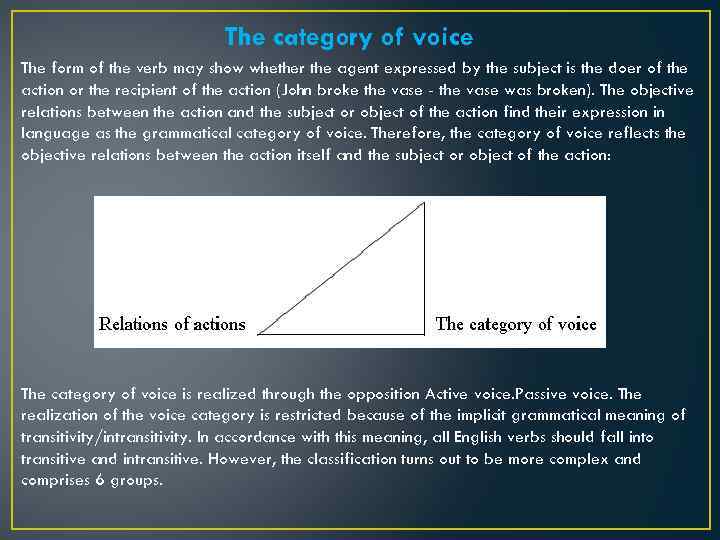 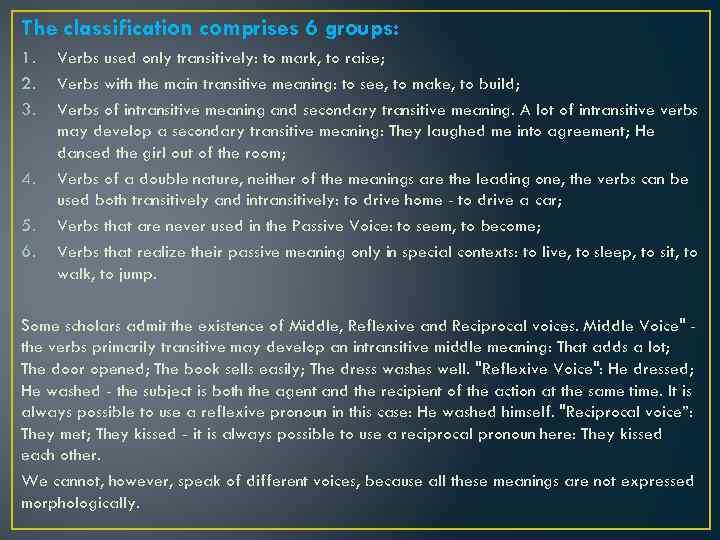 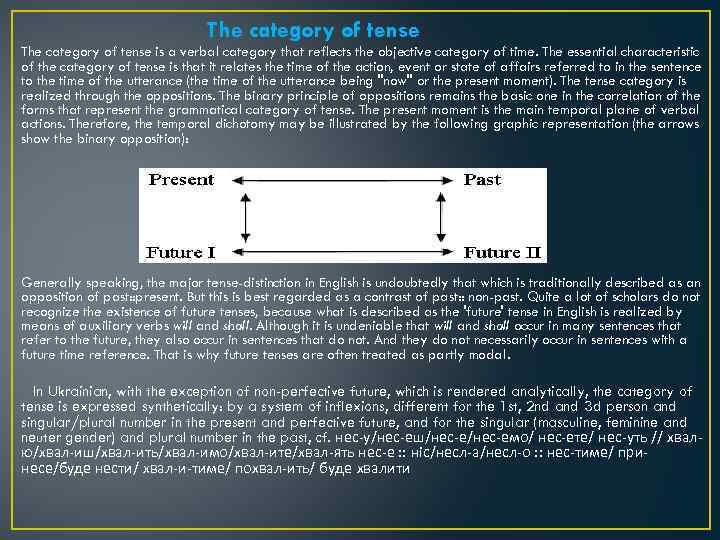 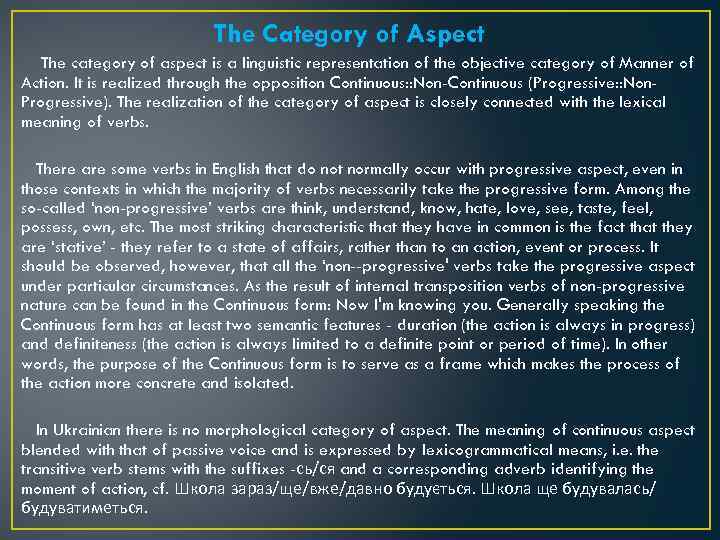 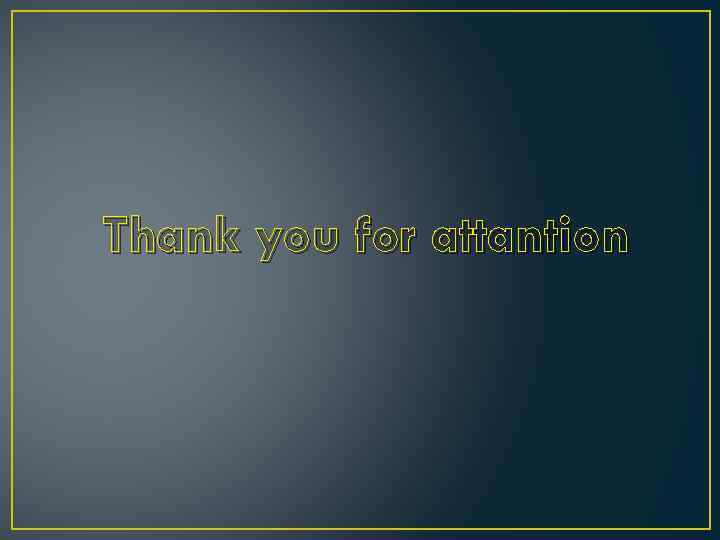 Grammatically the verb is the most complex part of speech. First of all it performs the central role in realizing predication - connection between situation in the utterance and reality. That is why the verb is of primary informative significance in an utterance. Besides, the verb possesses quite a lot of grammatical categories. Furthermore, within the class of verb various subclass divisions based on different principles of classification can be found.

• Semantic features of the verb. The verb possesses the grammatical meaning of verbiality - the ability to denote a process developing in time. This meaning is inherent not only in the verbs denoting processes, but also in those denoting states, forms of existence, evaluations, etc. • Morphological features of the verb. The verb possesses the following grammatical categories: tense, aspect, voice, mood, person, number, finitude and phase. The common categories for finite and non-finite forms are voice, . Taspect, phase and finitudehe grammatical categories of the English verb find their expression in synthetical and analytical forms. The formative elements expressing these categories are grammatical affixes, inner inflexion and function words. Some categories have only synthetical forms (person, number), others - only analytical (voice). There also categories expressed by both synthetical and analytical forms (mood, tense, aspect). Ukrainian verbs change their form in accordance with the person, number, tense. This change is called declension. The inflexions of Ukrainian verbs in different categorical forms depend on the verb class. Subdivision of verbs into classes is based on the correlation between the infinitival stem of the verb, on the one hand, and its present tense stem, on the other. The present tense stem (нес-уть, бажа-ють, сид- ять, леж-ать) is the basis for: (a) present tense and simple future; (b) imperative mood. The infinitival stem (біг-ти, роби-ти, зна-ться) is the basis for (a): past tense; (b) subjunctive mood. There are two declensions singled out in accordance with the character of the vowel in present tense inflexions: the 1 st declension has inflexions: (a) -уть/ють in the 3 d person plural, cf. пиш-уть, каж-уть, чита-ють; (b) the vowel -е/є in the rest of the cases, cf. пиш-еш, каж-емо, чита-єте, пиш-е, чита-є; the 2 nd declension has ать/-ять in the 3 d person plural, cf. біж-ать, любл-ять, го-ять; (b) -и/і/ї in the rest of the cases, cf. любиш, біж-иш, люб-ить, го-їмо. • Syntactic features. The most universal syntactic feature of verbs is their ability to be modified by adverbs. The second important syntactic criterion is the ability of the verb to perform the syntactic function of the predicate. However, this criterion is not absolute because only finite forms can perform this function while non-finite forms can be used in any function but predicate. And finally, any verb in the form of the infinitive can be combined with a modal verb.

The classification comprises 6 groups: 1. 2. 3. 4. 5. 6. Verbs used only transitively: to mark, to raise; Verbs with the main transitive meaning: to see, to make, to build; Verbs of intransitive meaning and secondary transitive meaning. A lot of intransitive verbs may develop a secondary transitive meaning: They laughed me into agreement; He danced the girl out of the room; Verbs of a double nature, neither of the meanings are the leading one, the verbs can be used both transitively and intransitively: to drive home - to drive a car; Verbs that are never used in the Passive Voice: to seem, to become; Verbs that realize their passive meaning only in special contexts: to live, to sleep, to sit, to walk, to jump. Some scholars admit the existence of Middle, Reflexive and Reciprocal voices. Middle Voice" the verbs primarily transitive may develop an intransitive middle meaning: That adds a lot; The door opened; The book sells easily; The dress washes well. "Reflexive Voice": He dressed; He washed - the subject is both the agent and the recipient of the action at the same time. It is always possible to use a reflexive pronoun in this case: He washed himself. "Reciprocal voice”: They met; They kissed - it is always possible to use a reciprocal pronoun here: They kissed each other. We cannot, however, speak of different voices, because all these meanings are not expressed morphologically.

The category of tense is a verbal category that reflects the objective category of time. The essential characteristic of the category of tense is that it relates the time of the action, event or state of affairs referred to in the sentence to the time of the utterance (the time of the utterance being "now" or the present moment). The tense category is realized through the oppositions. The binary principle of oppositions remains the basic one in the correlation of the forms that represent the grammatical category of tense. The present moment is the main temporal plane of verbal actions. Therefore, the temporal dichotomy may be illustrated by the following graphic representation (the arrows show the binary opposition): Generally speaking, the major tense-distinction in English is undoubtedly that which is traditionally described as an opposition of past: : present. But this is best regarded as a contrast of past: : non-past. Quite a lot of scholars do not recognize the existence of future tenses, because what is described as the 'future' tense in English is realized by means of auxiliary verbs will and shall. Although it is undeniable that will and shall occur in many sentences that refer to the future, they also occur in sentences that do not. And they do not necessarily occur in sentences with a future time reference. That is why future tenses are often treated as partly modal. In Ukrainian, with the exception of non-perfective future, which is rendered analytically, the category of tense is expressed synthetically: by a system of inflexions, different for the 1 st, 2 nd and 3 d person and singular/plural number in the present and perfective future, and for the singular (masculine, feminine and neuter gender) and plural number in the past, cf. нес-у/нес-еш/нес-емо/ нес-ете/ нес-уть // хвалю/хвал-иш/хвал-ить/хвал-имо/хвал-ите/хвал-ять нес-е : : ніс/несл-а/несл-о : : нес-тиме/ принесе/буде нести/ хвал-и-тиме/ похвал-ить/ буде хвалити

The Category of Aspect The category of aspect is a linguistic representation of the objective category of Manner of Action. It is realized through the opposition Continuous: : Non-Continuous (Progressive: : Non. Progressive). The realization of the category of aspect is closely connected with the lexical meaning of verbs. There are some verbs in English that do not normally occur with progressive aspect, even in those contexts in which the majority of verbs necessarily take the progressive form. Among the so-called ‘non-progressive’ verbs are think, understand, know, hate, love, see, taste, feel, possess, own, etc. The most striking characteristic that they have in common is the fact that they are ‘stative’ - they refer to a state of affairs, rather than to an action, event or process. It should be observed, however, that all the ‘non- progressive' verbs take the progressive aspect under particular circumstances. As the result of internal transposition verbs of non-progressive nature can be found in the Continuous form: Now I'm knowing you. Generally speaking the Continuous form has at least two semantic features - duration (the action is always in progress) and definiteness (the action is always limited to a definite point or period of time). In other words, the purpose of the Continuous form is to serve as a frame which makes the process of the action more concrete and isolated. In Ukrainian there is no morphological category of aspect. The meaning of continuous aspect blended with that of passive voice and is expressed by lexicogrammatical means, i. e. the transitive verb stems with the suffixes -сь/ся and a corresponding adverb identifying the moment of action, cf. Школа зараз/ще/вже/давно будується. Школа ще будувалась/ будуватиметься.