From Human Prehistory to the Early Civilizations 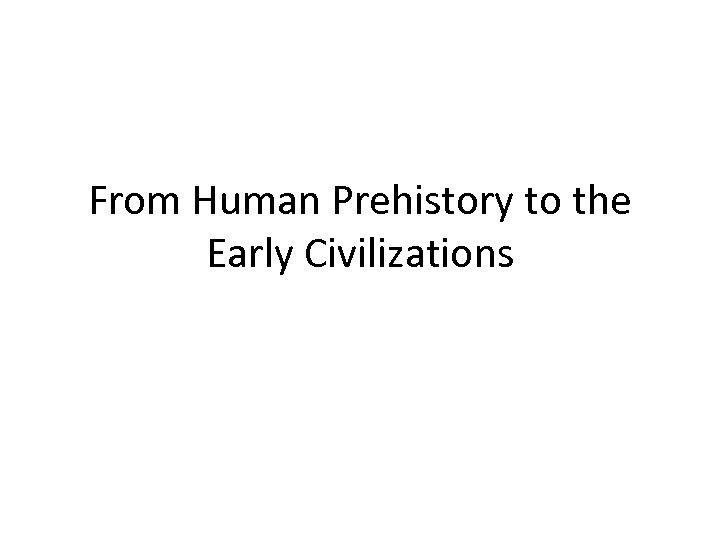 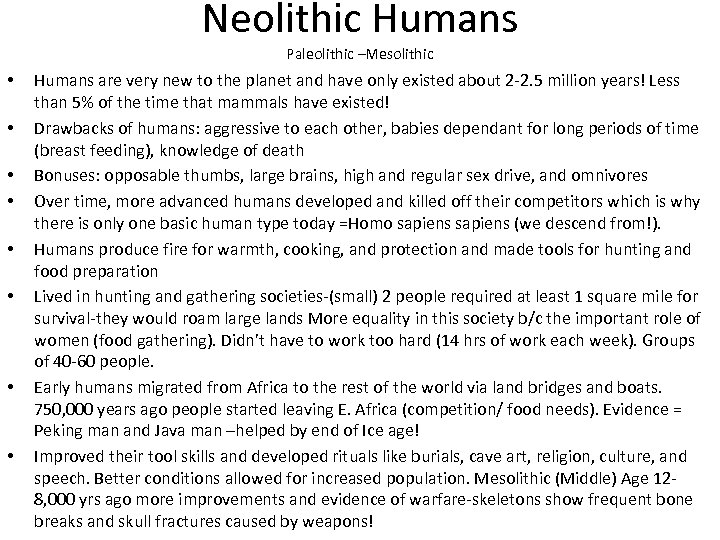 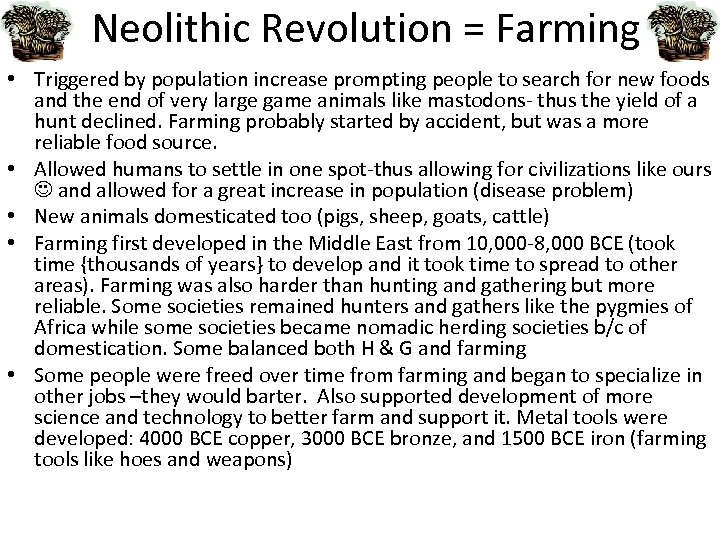 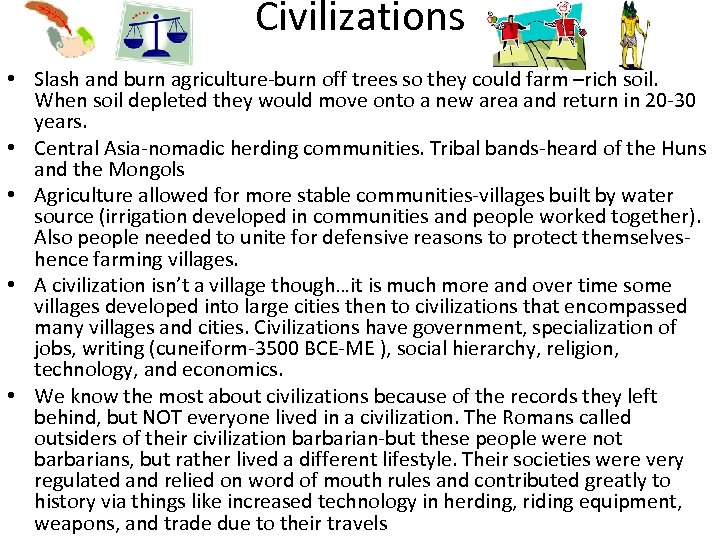 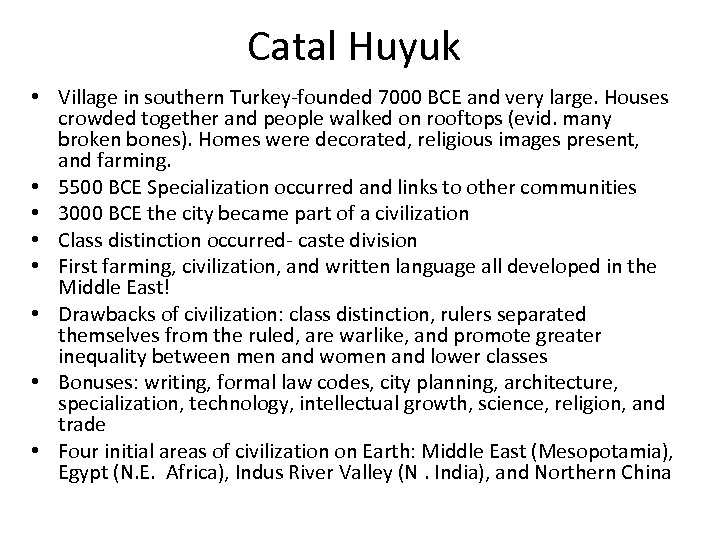 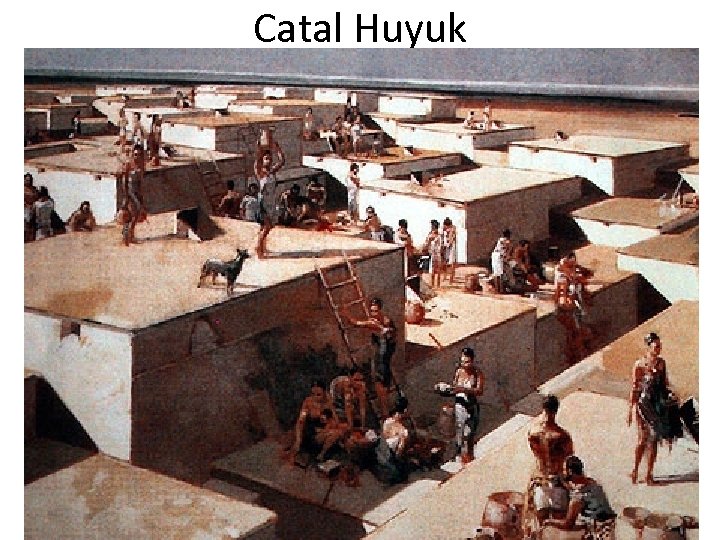 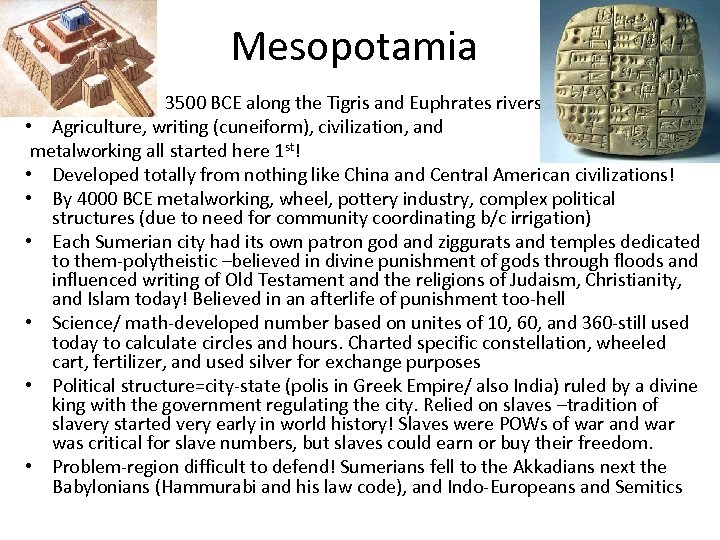 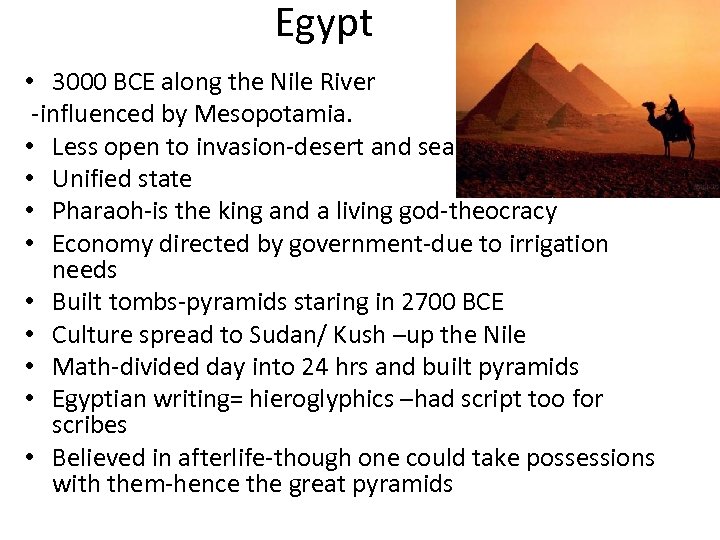 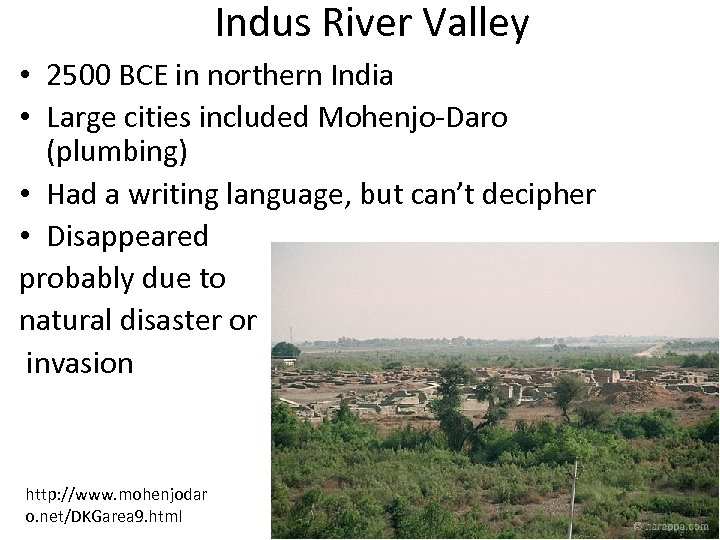 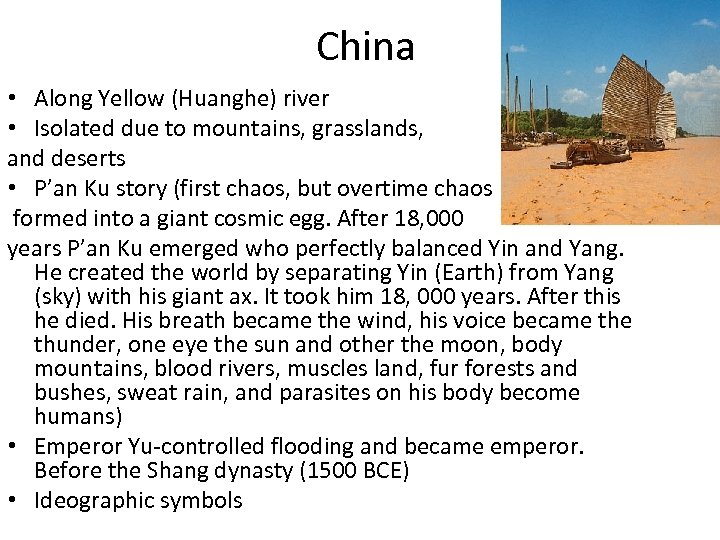 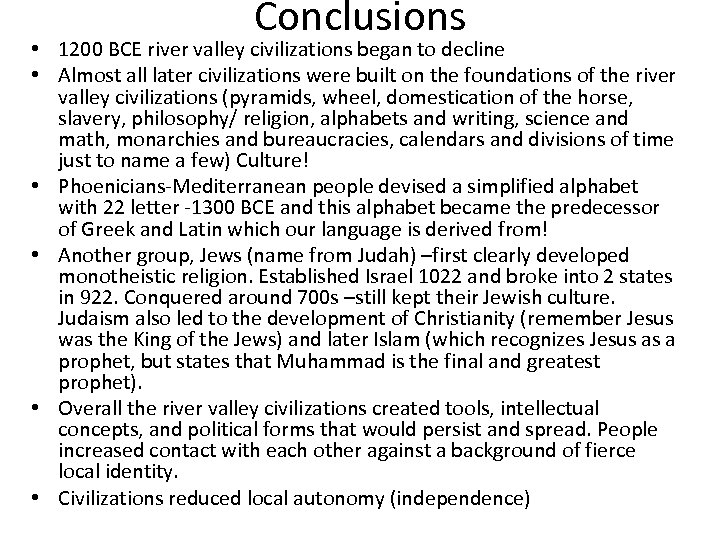 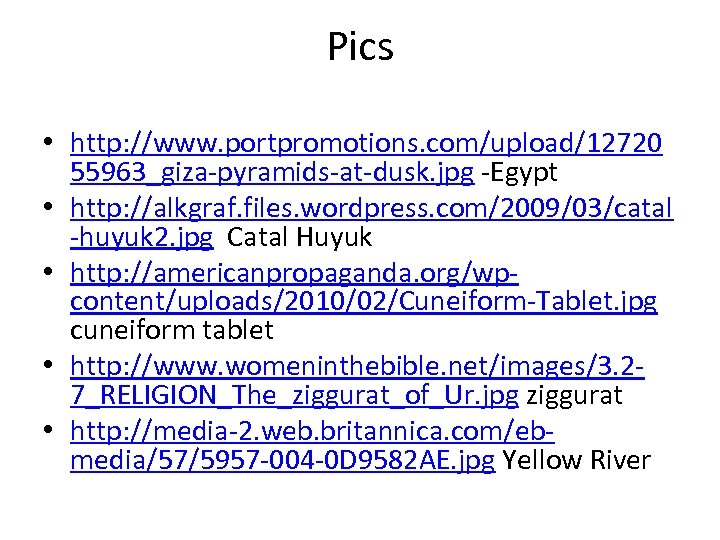 Скачать презентацию From Human Prehistory to the Early Civilizations

From Human Prehistory to the Early Civilizations

Neolithic Humans Paleolithic –Mesolithic • • Humans are very new to the planet and have only existed about 2 -2. 5 million years! Less than 5% of the time that mammals have existed! Drawbacks of humans: aggressive to each other, babies dependant for long periods of time (breast feeding), knowledge of death Bonuses: opposable thumbs, large brains, high and regular sex drive, and omnivores Over time, more advanced humans developed and killed off their competitors which is why there is only one basic human type today =Homo sapiens (we descend from!). Humans produce fire for warmth, cooking, and protection and made tools for hunting and food preparation Lived in hunting and gathering societies-(small) 2 people required at least 1 square mile for survival-they would roam large lands More equality in this society b/c the important role of women (food gathering). Didn’t have to work too hard (14 hrs of work each week). Groups of 40 -60 people. Early humans migrated from Africa to the rest of the world via land bridges and boats. 750, 000 years ago people started leaving E. Africa (competition/ food needs). Evidence = Peking man and Java man –helped by end of Ice age! Improved their tool skills and developed rituals like burials, cave art, religion, culture, and speech. Better conditions allowed for increased population. Mesolithic (Middle) Age 128, 000 yrs ago more improvements and evidence of warfare-skeletons show frequent bone breaks and skull fractures caused by weapons!

Neolithic Revolution = Farming • Triggered by population increase prompting people to search for new foods and the end of very large game animals like mastodons- thus the yield of a hunt declined. Farming probably started by accident, but was a more reliable food source. • Allowed humans to settle in one spot-thus allowing for civilizations like ours and allowed for a great increase in population (disease problem) • New animals domesticated too (pigs, sheep, goats, cattle) • Farming first developed in the Middle East from 10, 000 -8, 000 BCE (took time {thousands of years} to develop and it took time to spread to other areas). Farming was also harder than hunting and gathering but more reliable. Some societies remained hunters and gathers like the pygmies of Africa while some societies became nomadic herding societies b/c of domestication. Some balanced both H & G and farming • Some people were freed over time from farming and began to specialize in other jobs –they would barter. Also supported development of more science and technology to better farm and support it. Metal tools were developed: 4000 BCE copper, 3000 BCE bronze, and 1500 BCE iron (farming tools like hoes and weapons)

Civilizations • Slash and burn agriculture-burn off trees so they could farm –rich soil. When soil depleted they would move onto a new area and return in 20 -30 years. • Central Asia-nomadic herding communities. Tribal bands-heard of the Huns and the Mongols • Agriculture allowed for more stable communities-villages built by water source (irrigation developed in communities and people worked together). Also people needed to unite for defensive reasons to protect themselveshence farming villages. • A civilization isn’t a village though…it is much more and over time some villages developed into large cities then to civilizations that encompassed many villages and cities. Civilizations have government, specialization of jobs, writing (cuneiform-3500 BCE-ME ), social hierarchy, religion, technology, and economics. • We know the most about civilizations because of the records they left behind, but NOT everyone lived in a civilization. The Romans called outsiders of their civilization barbarian-but these people were not barbarians, but rather lived a different lifestyle. Their societies were very regulated and relied on word of mouth rules and contributed greatly to history via things like increased technology in herding, riding equipment, weapons, and trade due to their travels

Mesopotamia • 3500 BCE along the Tigris and Euphrates rivers • Agriculture, writing (cuneiform), civilization, and metalworking all started here 1 st! • Developed totally from nothing like China and Central American civilizations! • By 4000 BCE metalworking, wheel, pottery industry, complex political structures (due to need for community coordinating b/c irrigation) • Each Sumerian city had its own patron god and ziggurats and temples dedicated to them-polytheistic –believed in divine punishment of gods through floods and influenced writing of Old Testament and the religions of Judaism, Christianity, and Islam today! Believed in an afterlife of punishment too-hell • Science/ math-developed number based on unites of 10, 60, and 360 -still used today to calculate circles and hours. Charted specific constellation, wheeled cart, fertilizer, and used silver for exchange purposes • Political structure=city-state (polis in Greek Empire/ also India) ruled by a divine king with the government regulating the city. Relied on slaves –tradition of slavery started very early in world history! Slaves were POWs of war and war was critical for slave numbers, but slaves could earn or buy their freedom. • Problem-region difficult to defend! Sumerians fell to the Akkadians next the Babylonians (Hammurabi and his law code), and Indo-Europeans and Semitics

Egypt • 3000 BCE along the Nile River -influenced by Mesopotamia. • Less open to invasion-desert and sea • Unified state • Pharaoh-is the king and a living god-theocracy • Economy directed by government-due to irrigation needs • Built tombs-pyramids staring in 2700 BCE • Culture spread to Sudan/ Kush –up the Nile • Math-divided day into 24 hrs and built pyramids • Egyptian writing= hieroglyphics –had script too for scribes • Believed in afterlife-though one could take possessions with them-hence the great pyramids

China • Along Yellow (Huanghe) river • Isolated due to mountains, grasslands, and deserts • P’an Ku story (first chaos, but overtime chaos formed into a giant cosmic egg. After 18, 000 years P’an Ku emerged who perfectly balanced Yin and Yang. He created the world by separating Yin (Earth) from Yang (sky) with his giant ax. It took him 18, 000 years. After this he died. His breath became the wind, his voice became thunder, one eye the sun and other the moon, body mountains, blood rivers, muscles land, fur forests and bushes, sweat rain, and parasites on his body become humans) • Emperor Yu-controlled flooding and became emperor. Before the Shang dynasty (1500 BCE) • Ideographic symbols

Conclusions • 1200 BCE river valley civilizations began to decline • Almost all later civilizations were built on the foundations of the river valley civilizations (pyramids, wheel, domestication of the horse, slavery, philosophy/ religion, alphabets and writing, science and math, monarchies and bureaucracies, calendars and divisions of time just to name a few) Culture! • Phoenicians-Mediterranean people devised a simplified alphabet with 22 letter -1300 BCE and this alphabet became the predecessor of Greek and Latin which our language is derived from! • Another group, Jews (name from Judah) –first clearly developed monotheistic religion. Established Israel 1022 and broke into 2 states in 922. Conquered around 700 s –still kept their Jewish culture. Judaism also led to the development of Christianity (remember Jesus was the King of the Jews) and later Islam (which recognizes Jesus as a prophet, but states that Muhammad is the final and greatest prophet). • Overall the river valley civilizations created tools, intellectual concepts, and political forms that would persist and spread. People increased contact with each other against a background of fierce local identity. • Civilizations reduced local autonomy (independence)

The Human Condition Some contemplations about the