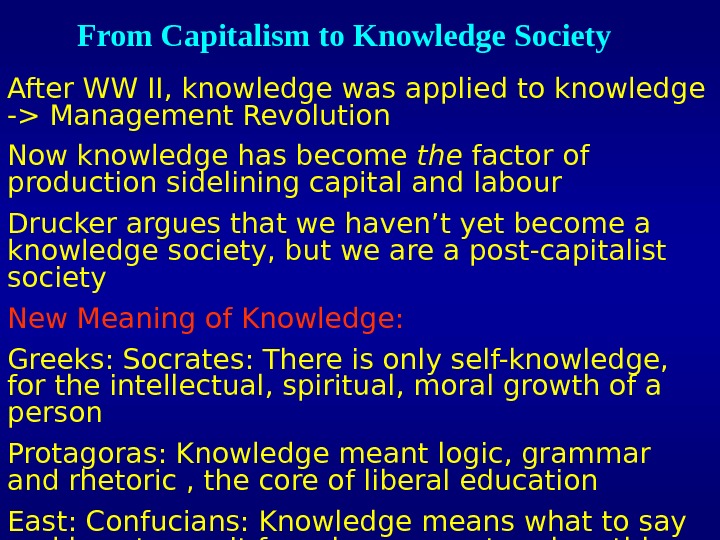 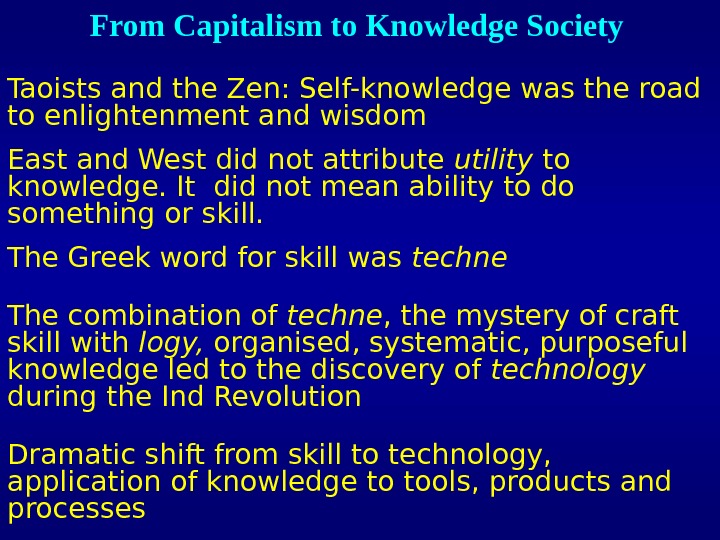 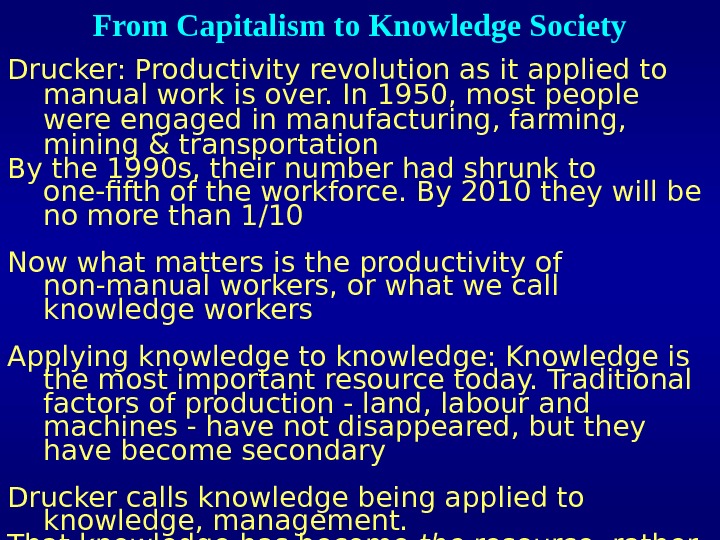 From Capitalism to Knowledge Society Peter Drucker Capitalism and technology conquered the world The transformation of both the East and West was driven by radical changes in the meaning of knowledge Before knowledge was always seen as applying to being Then it began to be applied to doing, it became a resource The application of knowledge to tools, processes, and products led to the Industrial Revolution ~1750 Then around 1880, the application of knowledge to work (Taylorism) led to the Productivity Revolution. In 75 years proletarians were made into middle class

From Capitalism to Knowledge Society After WW II, knowledge was applied to knowledge -> Management Revolution Now knowledge has become the factor of production sidelining capital and labour Drucker argues that we haven’t yet become a knowledge society, but we are a post-capitalist society New Meaning of Knowledge: Greeks: Socrates: There is only self-knowledge, for the intellectual, spiritual, moral growth of a person Protagoras: Knowledge meant logic, grammar and rhetoric , the core of liberal education East: Confucians: Knowledge means what to say and how to say it for advancement and earthly success

From Capitalism to Knowledge Society Taoists and the Zen: Self-knowledge was the road to enlightenment and wisdom East and West did not attribute utility to knowledge. It did not mean ability to do something or skill. The Greek word for skill was techne The combination of techne , the mystery of craft skill with logy, organised, systematic, purposeful knowledge led to the discovery of technology during the Ind Revolution Dramatic shift from skill to technology, application of knowledge to tools, products and processes From household production to factory production: IR, the machine and factory system began in mid 18 th C.

Productivity Revolution: application of knowledge to work Taylor: work could be studied, in manual operations there is only work, no skilled work Work could be analysed and divided into a series of simple repetitive motions to be done in one right way with the right tools Taylor’s intentions were attacked by workers and management. Drucker: The productivity revolution defeated Marxism, Marx’s proletarians did not become affluent, but became middle class From Capitalism to Knowledge Society

From Capitalism to Knowledge Society Drucker: Productivity revolution as it applied to manual work is over. In 1950, most people were engaged in manufacturing, farming, mining & transportation By the 1990 s, their number had shrunk to one-fifth of the workforce. By 2010 they will be no more than 1/10 Now what matters is the productivity of non-manual workers, or what we call knowledge workers Applying knowledge to knowledge: Knowledge is the most important resource today. Traditional factors of production — land, labour and machines — have not disappeared, but they have become secondary Drucker calls knowledge being applied to knowledge, management. That knowledge has become the resource, rather than a resource made our society post-capitalist.