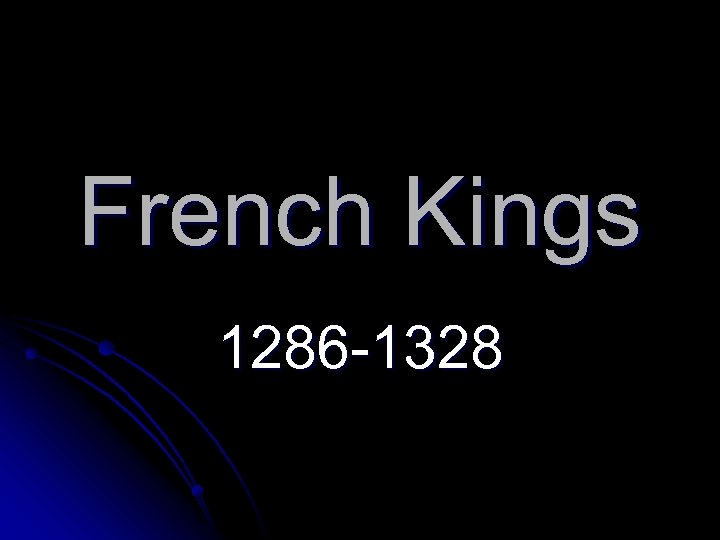 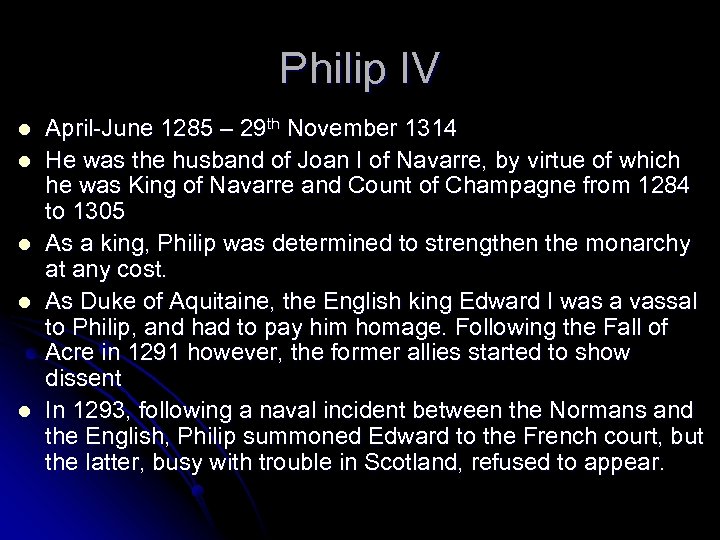 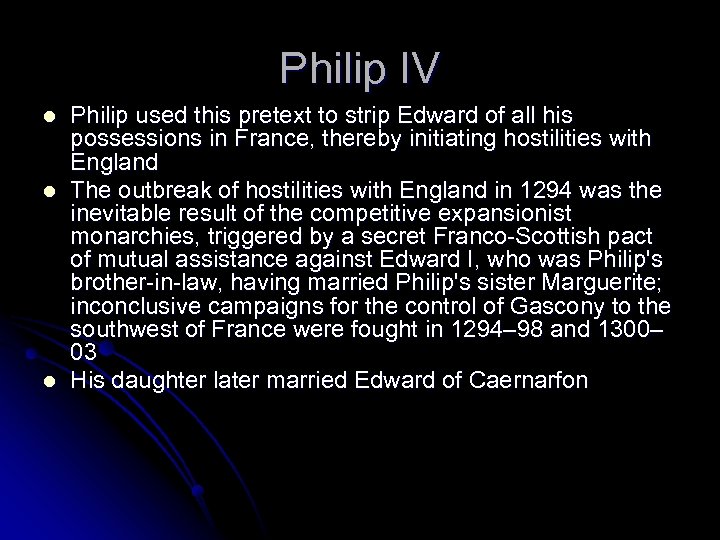 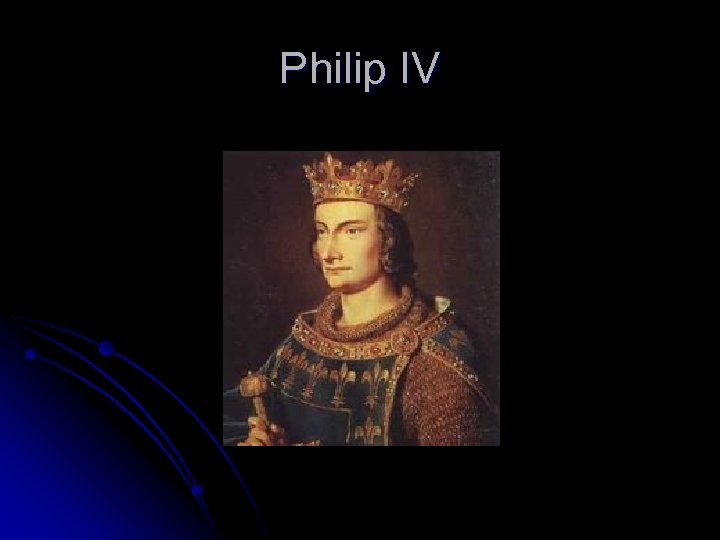 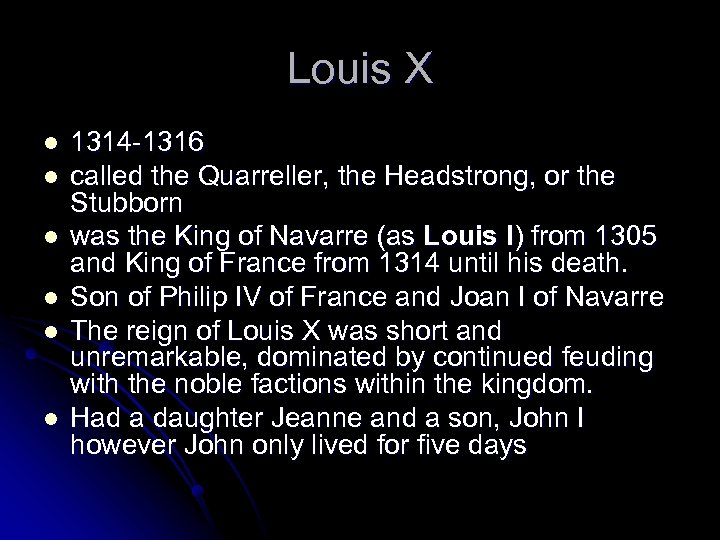 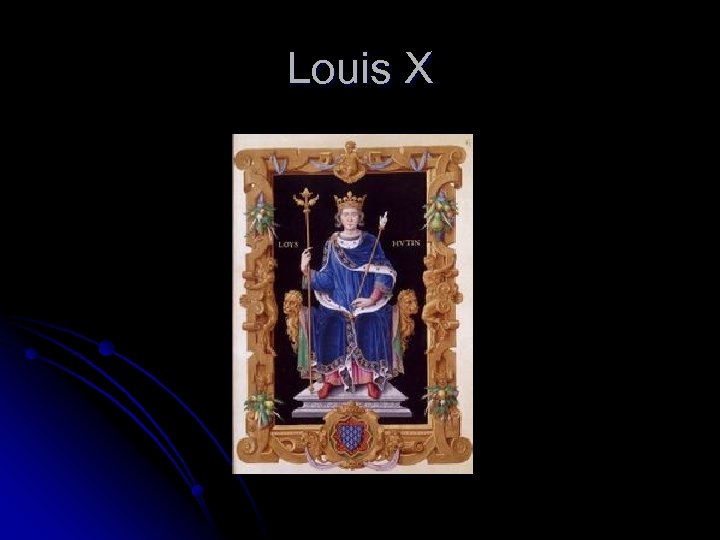 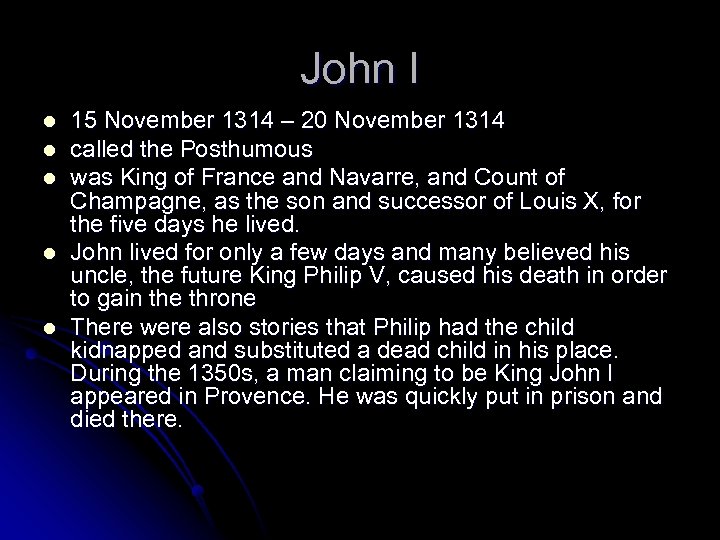 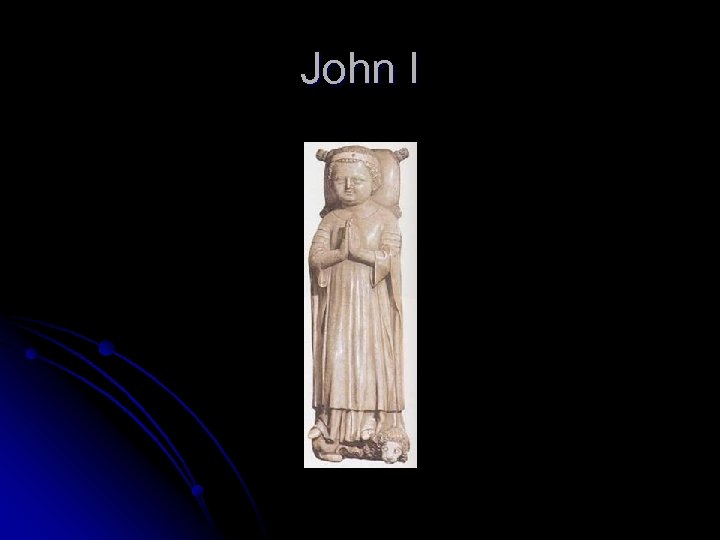 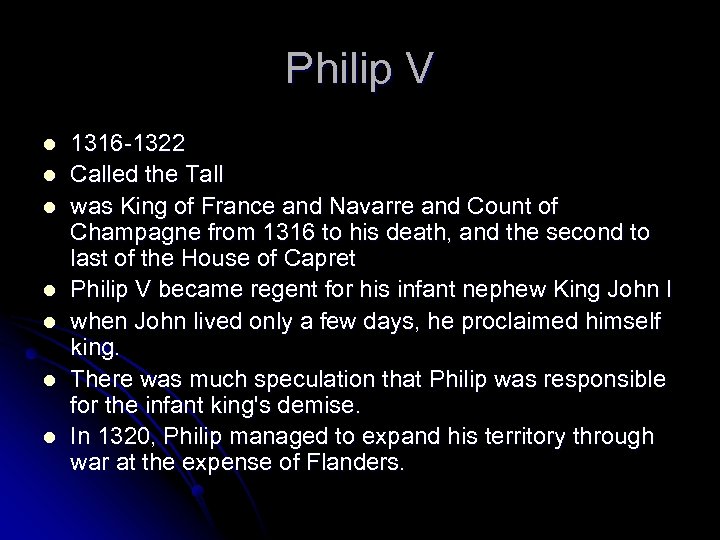 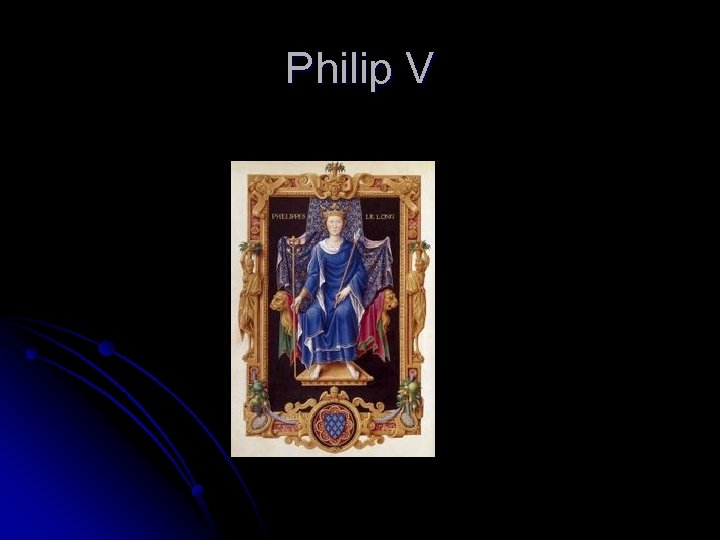 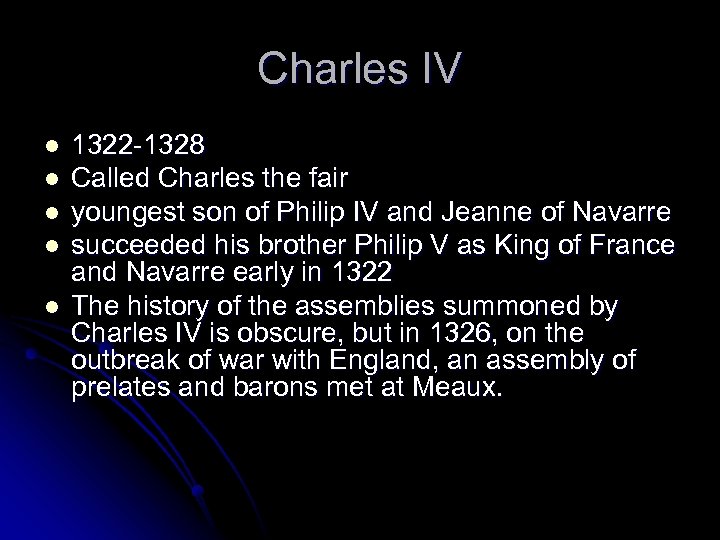 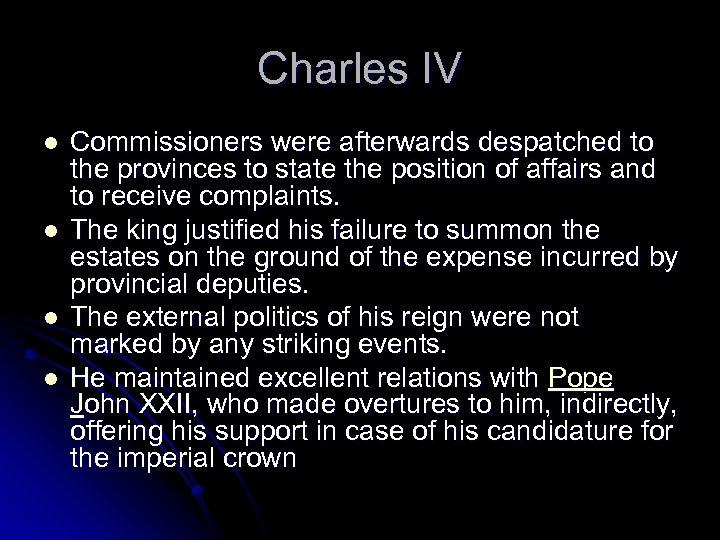 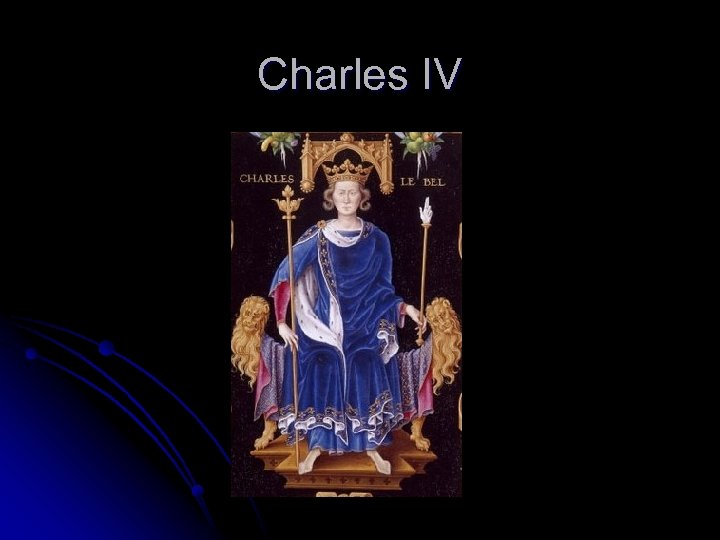 Philip IV l l l April-June 1285 – 29 th November 1314 He was the husband of Joan I of Navarre, by virtue of which he was King of Navarre and Count of Champagne from 1284 to 1305 As a king, Philip was determined to strengthen the monarchy at any cost. As Duke of Aquitaine, the English king Edward I was a vassal to Philip, and had to pay him homage. Following the Fall of Acre in 1291 however, the former allies started to show dissent In 1293, following a naval incident between the Normans and the English, Philip summoned Edward to the French court, but the latter, busy with trouble in Scotland, refused to appear.

Philip IV l l l Philip used this pretext to strip Edward of all his possessions in France, thereby initiating hostilities with England The outbreak of hostilities with England in 1294 was the inevitable result of the competitive expansionist monarchies, triggered by a secret Franco-Scottish pact of mutual assistance against Edward I, who was Philip's brother-in-law, having married Philip's sister Marguerite; inconclusive campaigns for the control of Gascony to the southwest of France were fought in 1294– 98 and 1300– 03 His daughter later married Edward of Caernarfon

Louis X l l l 1314 -1316 called the Quarreller, the Headstrong, or the Stubborn was the King of Navarre (as Louis I) from 1305 and King of France from 1314 until his death. Son of Philip IV of France and Joan I of Navarre The reign of Louis X was short and unremarkable, dominated by continued feuding with the noble factions within the kingdom. Had a daughter Jeanne and a son, John I however John only lived for five days

John I l l l 15 November 1314 – 20 November 1314 called the Posthumous was King of France and Navarre, and Count of Champagne, as the son and successor of Louis X, for the five days he lived. John lived for only a few days and many believed his uncle, the future King Philip V, caused his death in order to gain the throne There were also stories that Philip had the child kidnapped and substituted a dead child in his place. During the 1350 s, a man claiming to be King John I appeared in Provence. He was quickly put in prison and died there.

Philip V l l l l 1316 -1322 Called the Tall was King of France and Navarre and Count of Champagne from 1316 to his death, and the second to last of the House of Capret Philip V became regent for his infant nephew King John I when John lived only a few days, he proclaimed himself king. There was much speculation that Philip was responsible for the infant king's demise. In 1320, Philip managed to expand his territory through war at the expense of Flanders.

Charles IV l l l 1322 -1328 Called Charles the fair youngest son of Philip IV and Jeanne of Navarre succeeded his brother Philip V as King of France and Navarre early in 1322 The history of the assemblies summoned by Charles IV is obscure, but in 1326, on the outbreak of war with England, an assembly of prelates and barons met at Meaux.

Charles IV l l Commissioners were afterwards despatched to the provinces to state the position of affairs and to receive complaints. The king justified his failure to summon the estates on the ground of the expense incurred by provincial deputies. The external politics of his reign were not marked by any striking events. He maintained excellent relations with Pope John XXII, who made overtures to him, indirectly, offering his support in case of his candidature for the imperial crown