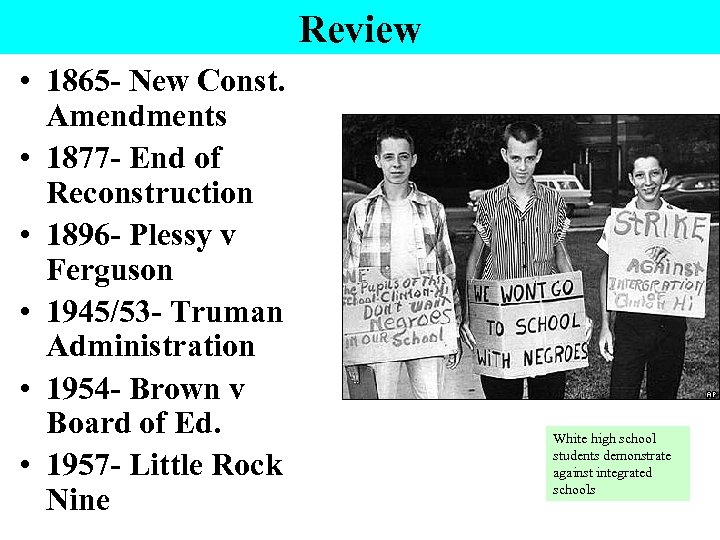 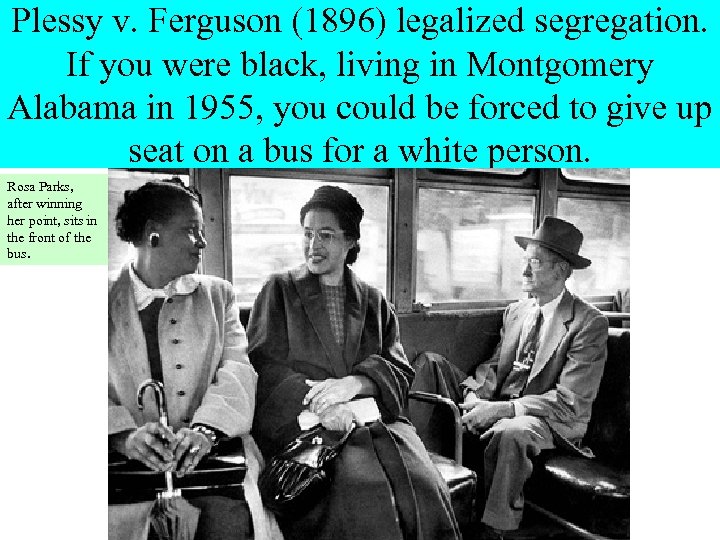 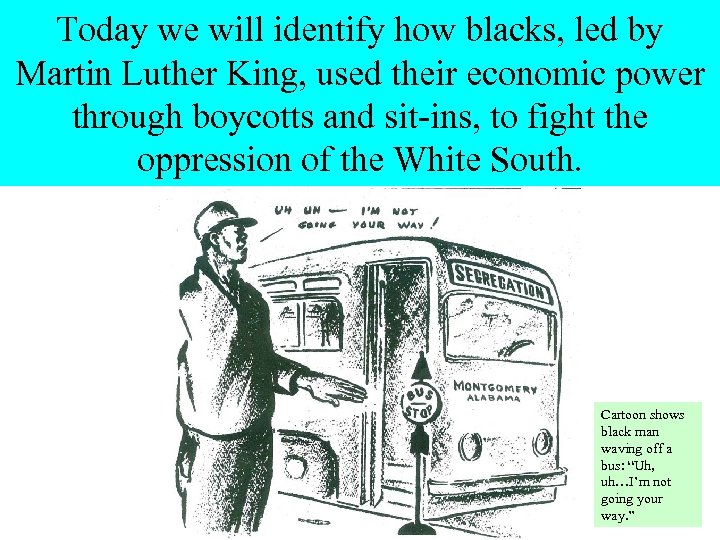 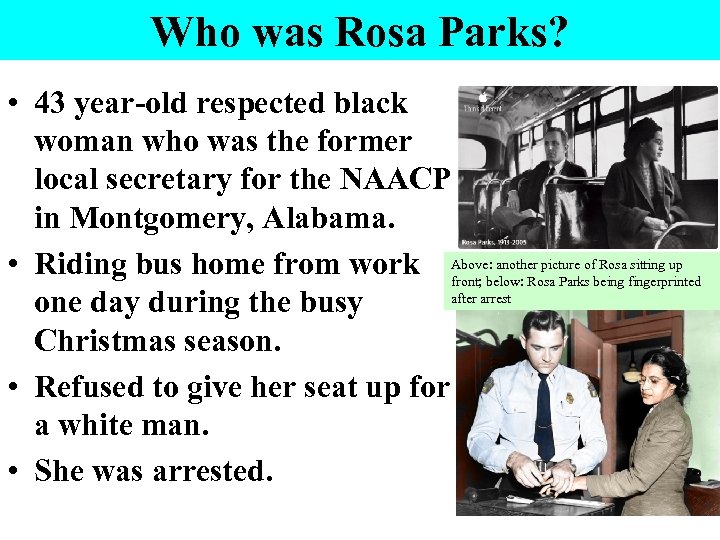 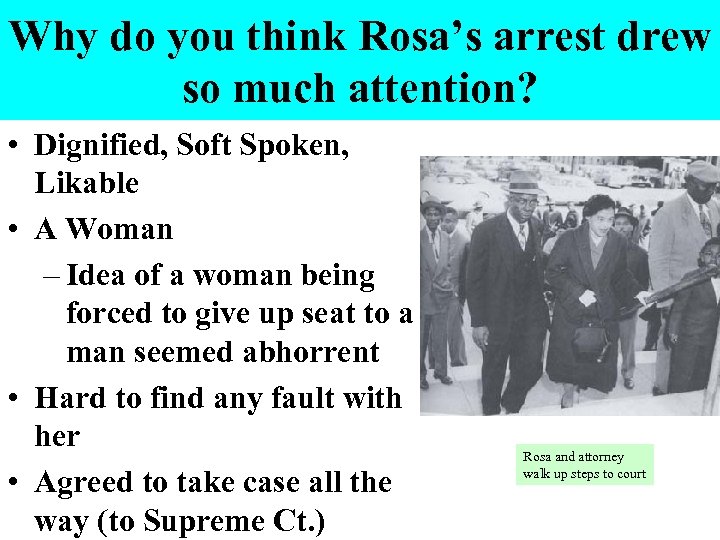 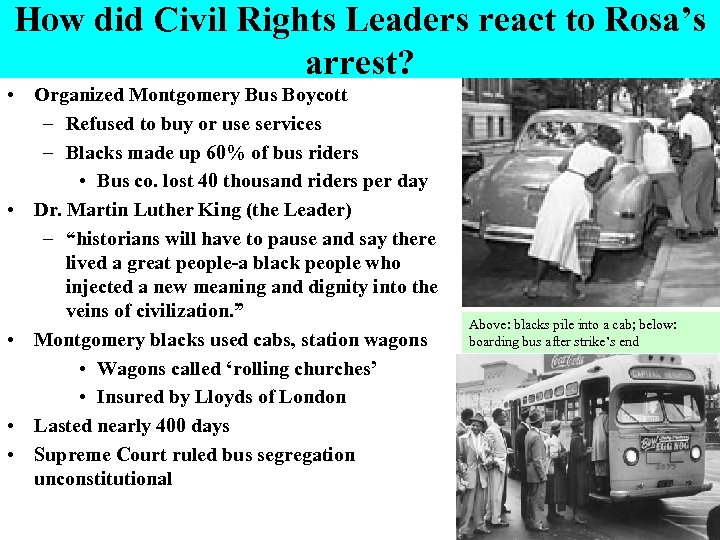 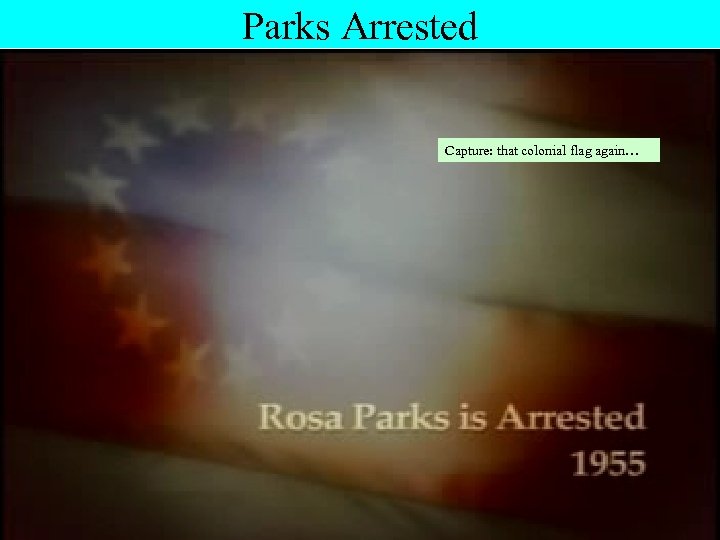 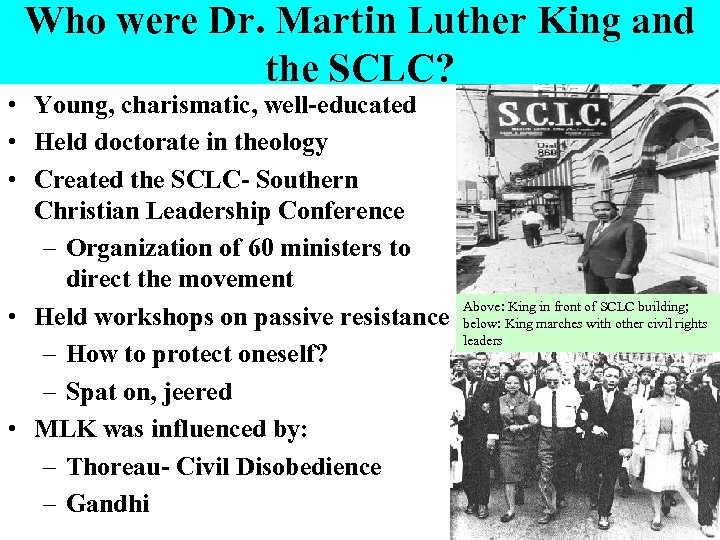 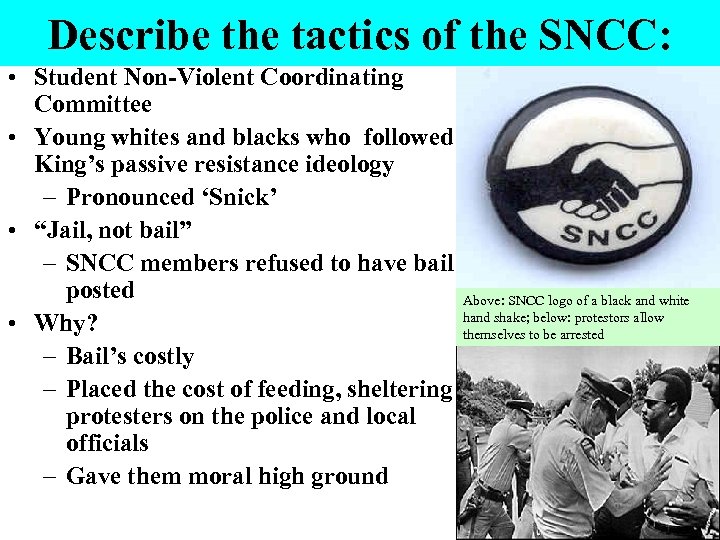 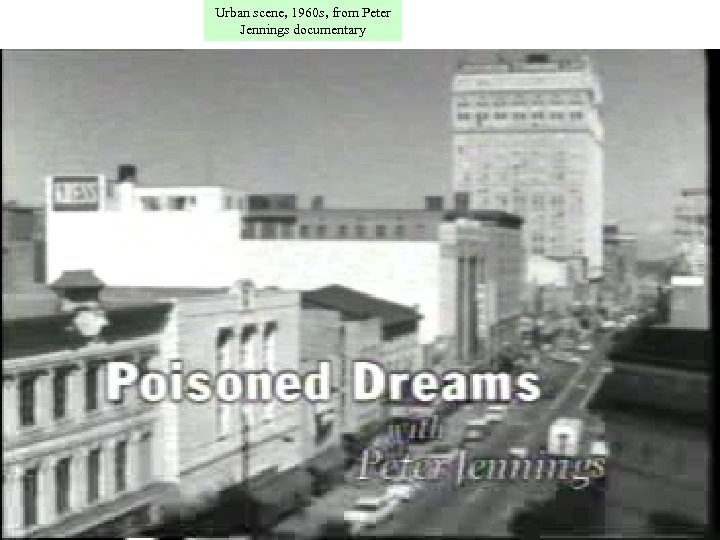 Plessy v. Ferguson (1896) legalized segregation. If you were black, living in Montgomery Alabama in 1955, you could be forced to give up seat on a bus for a white person. Rosa Parks, after winning her point, sits in the front of the bus.

How might you change the injustice of segregation? • • • Use violence Retaliations likely Doesn’t change people’s ‘heart’ Ignore the law May get arrested More dignified Bring a lawsuit (Brown v Board of Education) Legal victory Did not really change things Boycott Refuse to ride the bus – Hits them where it hurts ($)

Today we will identify how blacks, led by Martin Luther King, used their economic power through boycotts and sit-ins, to fight the oppression of the White South. Cartoon shows black man waving off a bus: “Uh, uh…I’m not going your way. ”

Who was Rosa Parks? • 43 year-old respected black woman who was the former local secretary for the NAACP in Montgomery, Alabama. Rosa sitting up • Riding bus home from work Above: another picture ofbeing fingerprinted front; below: Rosa Parks after arrest one day during the busy Christmas season. • Refused to give her seat up for a white man. • She was arrested.

Why do you think Rosa’s arrest drew so much attention? • Dignified, Soft Spoken, Likable • A Woman – Idea of a woman being forced to give up seat to a man seemed abhorrent • Hard to find any fault with her • Agreed to take case all the way (to Supreme Ct. ) Rosa and attorney walk up steps to court

How did Civil Rights Leaders react to Rosa’s arrest? • Organized Montgomery Bus Boycott – Refused to buy or use services – Blacks made up 60% of bus riders • Bus co. lost 40 thousand riders per day • Dr. Martin Luther King (the Leader) – “historians will have to pause and say there lived a great people-a black people who injected a new meaning and dignity into the veins of civilization. ” • Montgomery blacks used cabs, station wagons • Wagons called ‘rolling churches’ • Insured by Lloyds of London • Lasted nearly 400 days • Supreme Court ruled bus segregation unconstitutional Above: blacks pile into a cab; below: boarding bus after strike’s end

Who were Dr. Martin Luther King and the SCLC? • Young, charismatic, well-educated • Held doctorate in theology • Created the SCLC- Southern Christian Leadership Conference – Organization of 60 ministers to direct the movement • Held workshops on passive resistance – How to protect oneself? – Spat on, jeered • MLK was influenced by: – Thoreau- Civil Disobedience – Gandhi Above: King in front of SCLC building; below: King marches with other civil rights leaders

What are Sit-ins? • 4 freshmen in Greensboro, NC sat at all-white lunch counter and refused to move until served • Brought 27 students the next day • 300 by day 5 • Sat in shifts • Sales dropped 33% • Finally served 6 months later • Started a “Grass Roots” Movement. • 1960, 2, 000 students sit-ins – Read-ins, wade-ins (at beaches), kneel-ins (at churches) Above: liquids poured on students at Greensboro lunch counter; below: one of the many copycat demonstrations

Describe the tactics of the SNCC: • Student Non-Violent Coordinating Committee • Young whites and blacks who followed King’s passive resistance ideology – Pronounced ‘Snick’ • “Jail, not bail” – SNCC members refused to have bail posted • Why? – Bail’s costly – Placed the cost of feeding, sheltering protesters on the police and local officials – Gave them moral high ground Above: SNCC logo of a black and white hand shake; below: protestors allow themselves to be arrested