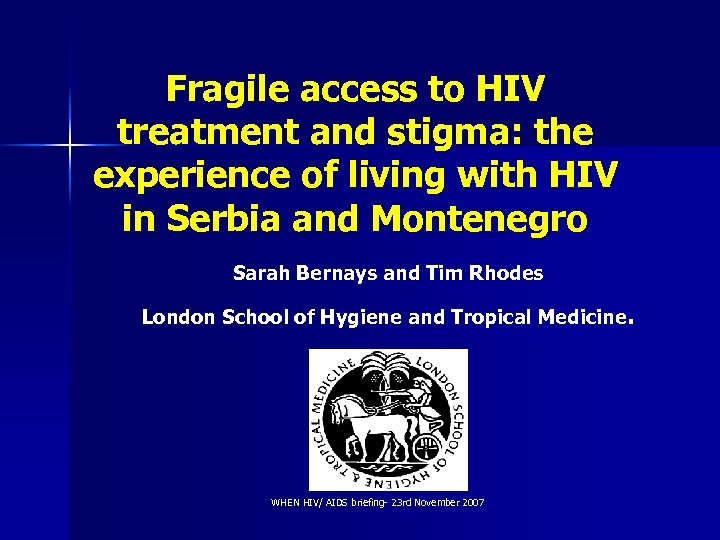 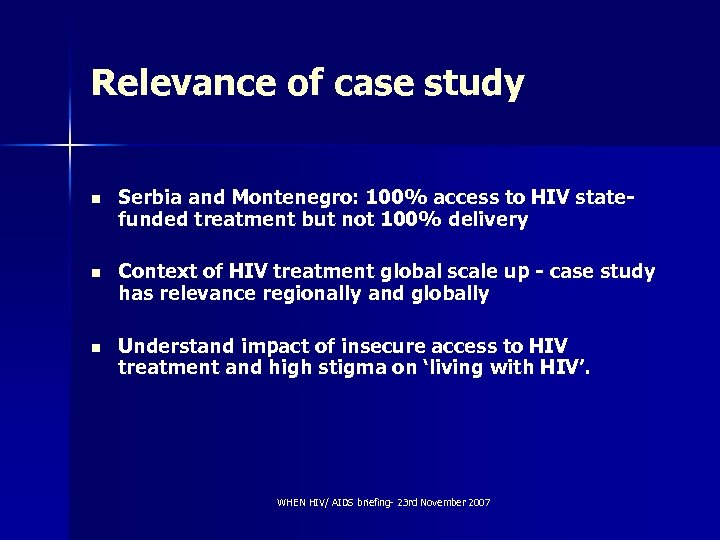 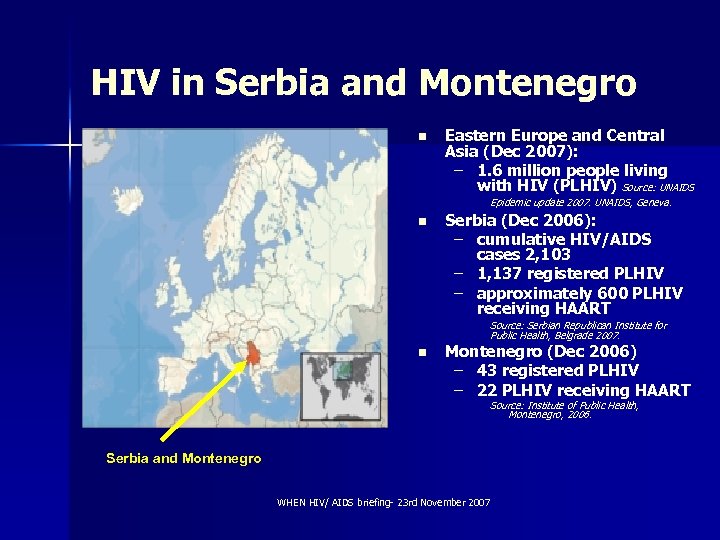 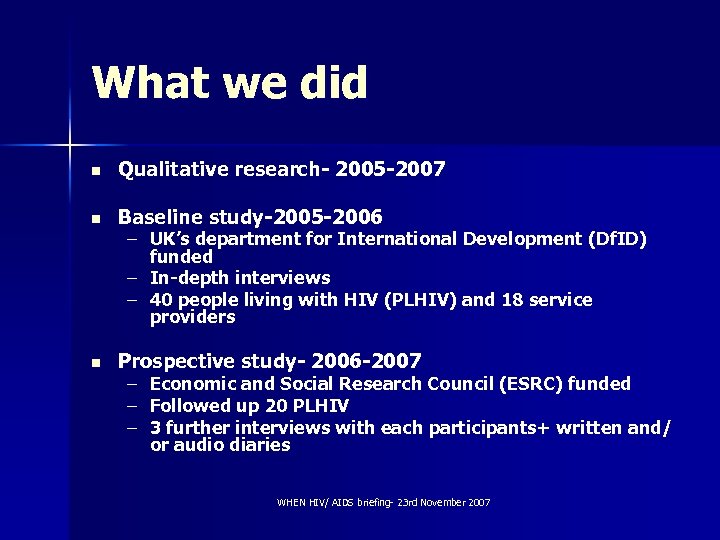 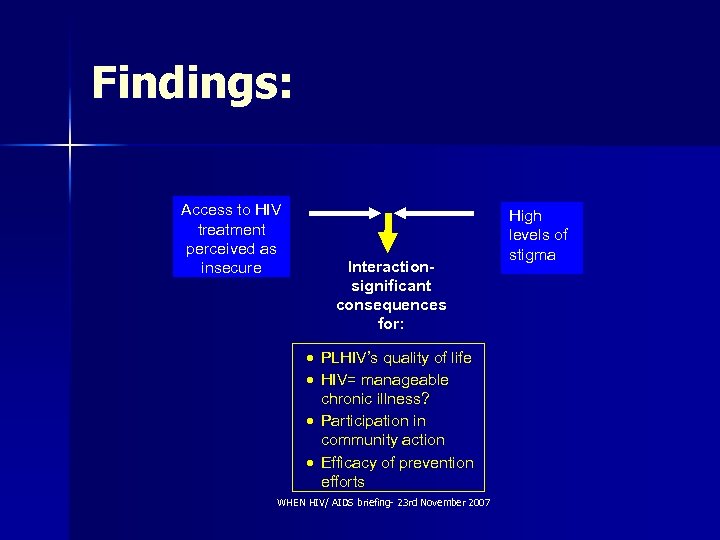 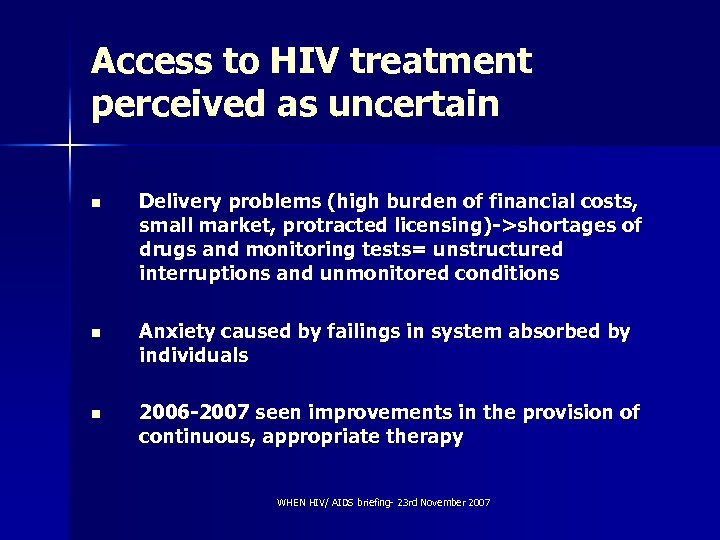 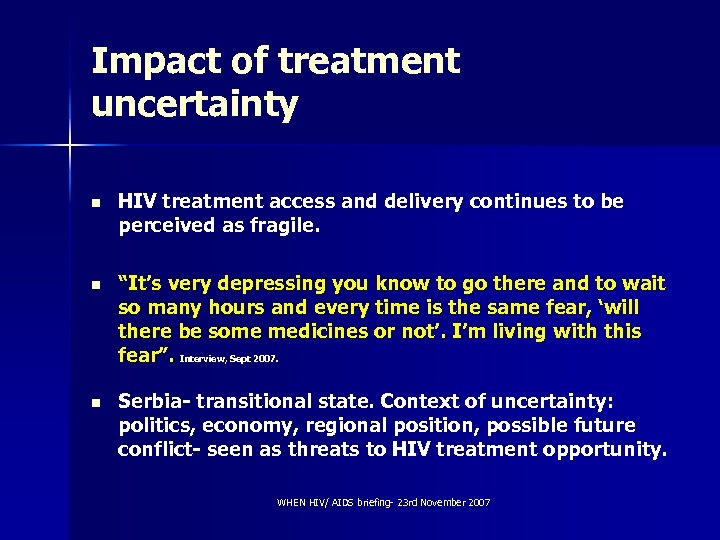 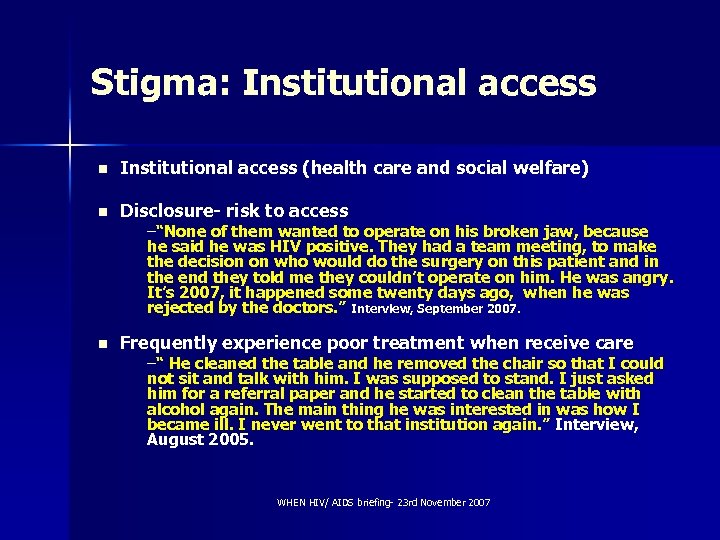 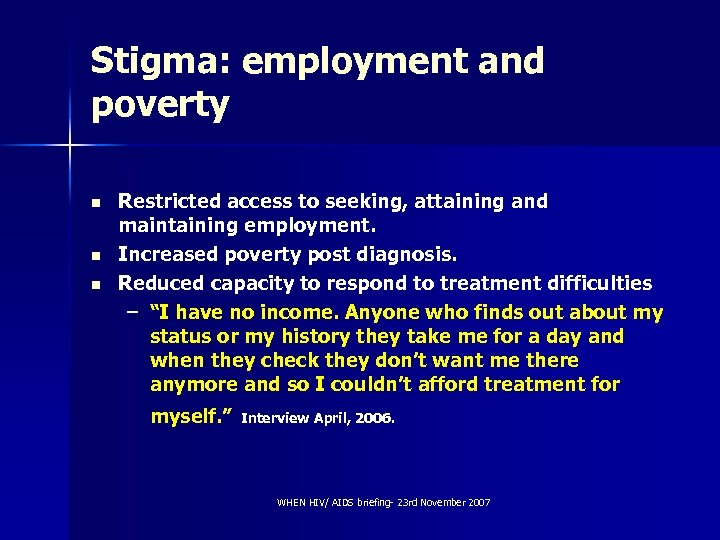 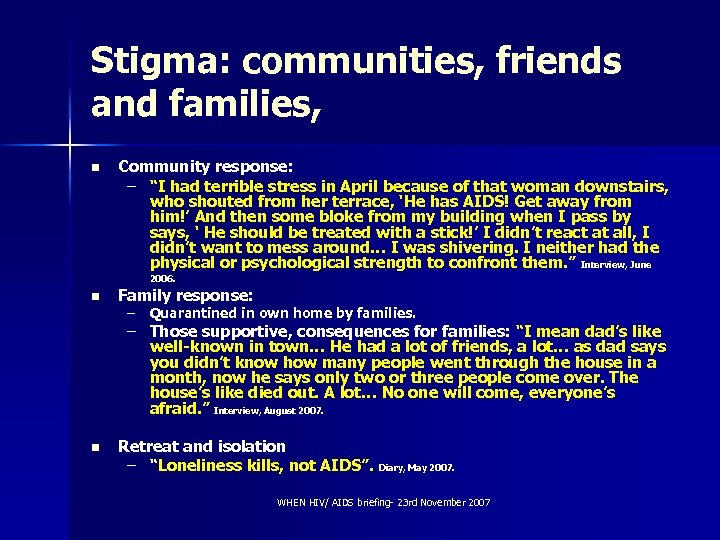 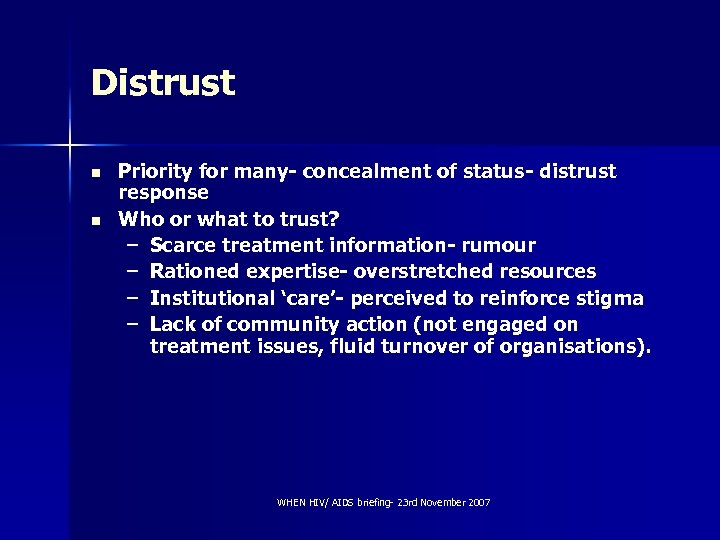 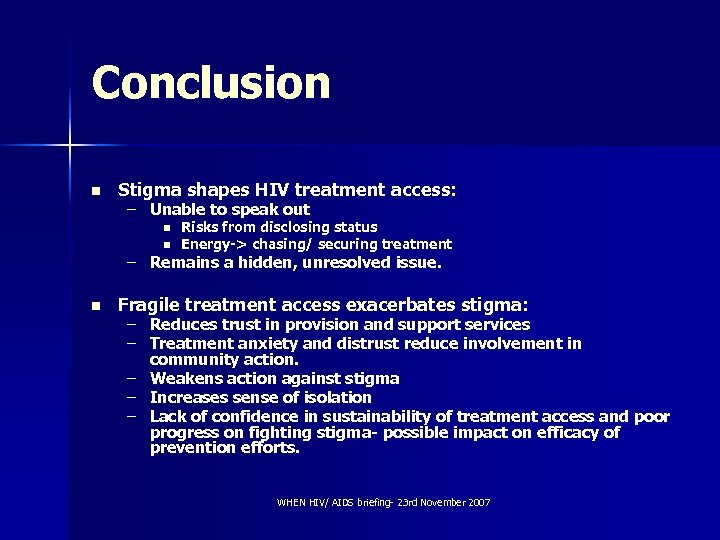 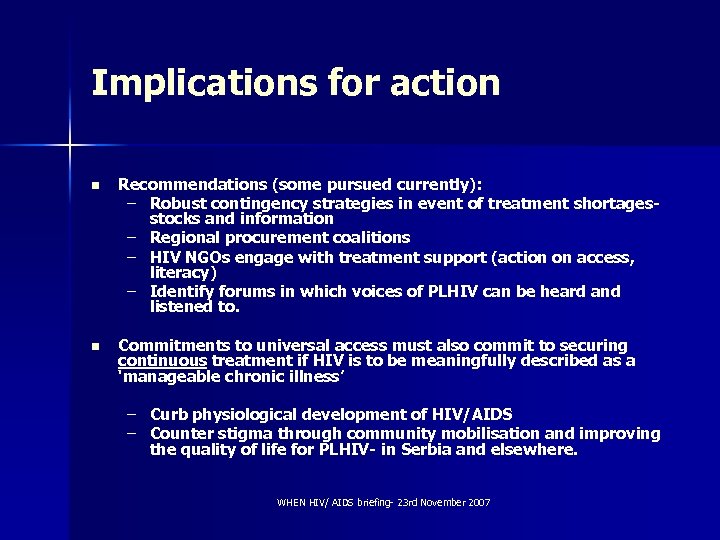 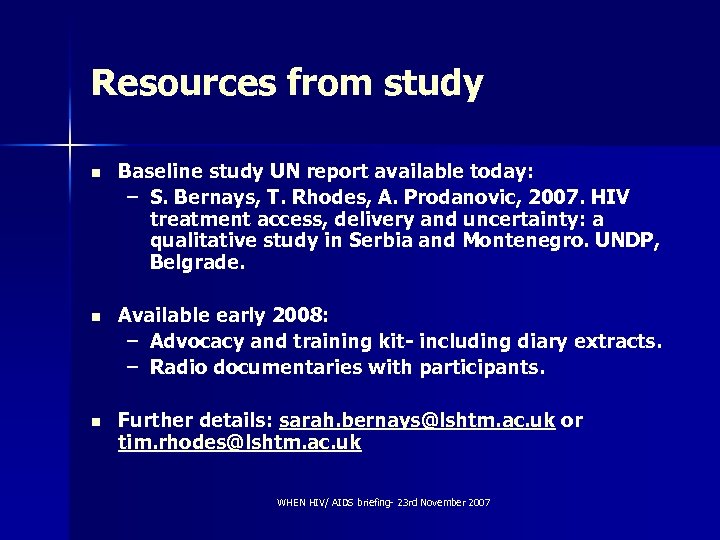 Скачать презентацию Fragile access to HIV treatment and stigma the

Fragile access to HIV treatment and stigma: the experience of living with HIV in Serbia and Montenegro Sarah Bernays and Tim Rhodes London School of Hygiene and Tropical Medicine. WHEN HIV/ AIDS briefing- 23 rd November 2007

Impact of treatment uncertainty n HIV treatment access and delivery continues to be perceived as fragile. n “It’s very depressing you know to go there and to wait so many hours and every time is the same fear, ‘will there be some medicines or not’. I’m living with this fear”. Interview, Sept 2007. n Serbia- transitional state. Context of uncertainty: politics, economy, regional position, possible future conflict- seen as threats to HIV treatment opportunity. WHEN HIV/ AIDS briefing- 23 rd November 2007

Stigma: Institutional access n Institutional access (health care and social welfare) n Disclosure- risk to access n Frequently experience poor treatment when receive care –“None of them wanted to operate on his broken jaw, because he said he was HIV positive. They had a team meeting, to make the decision on who would do the surgery on this patient and in the end they told me they couldn’t operate on him. He was angry. It’s 2007, it happened some twenty days ago, when he was rejected by the doctors. ” Interview, September 2007. –“ He cleaned the table and he removed the chair so that I could not sit and talk with him. I was supposed to stand. I just asked him for a referral paper and he started to clean the table with alcohol again. The main thing he was interested in was how I became ill. I never went to that institution again. ” Interview, August 2005. WHEN HIV/ AIDS briefing- 23 rd November 2007

Stigma: employment and poverty n n n Restricted access to seeking, attaining and maintaining employment. Increased poverty post diagnosis. Reduced capacity to respond to treatment difficulties – “I have no income. Anyone who finds out about my status or my history they take me for a day and when they check they don’t want me there anymore and so I couldn’t afford treatment for myself. ” Interview April, 2006. WHEN HIV/ AIDS briefing- 23 rd November 2007

Stigma: communities, friends and families, n Community response: – “I had terrible stress in April because of that woman downstairs, who shouted from her terrace, ‘He has AIDS! Get away from him!’ And then some bloke from my building when I pass by says, ‘ He should be treated with a stick!’ I didn’t react at all, I didn’t want to mess around… I was shivering. I neither had the physical or psychological strength to confront them. ” Interview, June 2006. n Family response: – Quarantined in own home by families. – Those supportive, consequences for families: “I mean dad’s like well-known in town… He had a lot of friends, a lot… as dad says you didn’t know how many people went through the house in a month, now he says only two or three people come over. The house’s like died out. A lot… No one will come, everyone’s afraid. ” Interview, August 2007. n Retreat and isolation – “Loneliness kills, not AIDS”. Diary, May 2007. WHEN HIV/ AIDS briefing- 23 rd November 2007

Implications for action n Recommendations (some pursued currently): – Robust contingency strategies in event of treatment shortagesstocks and information – Regional procurement coalitions – HIV NGOs engage with treatment support (action on access, literacy) – Identify forums in which voices of PLHIV can be heard and listened to. n Commitments to universal access must also commit to securing continuous treatment if HIV is to be meaningfully described as a ‘manageable chronic illness’ – Curb physiological development of HIV/AIDS – Counter stigma through community mobilisation and improving the quality of life for PLHIV- in Serbia and elsewhere. WHEN HIV/ AIDS briefing- 23 rd November 2007