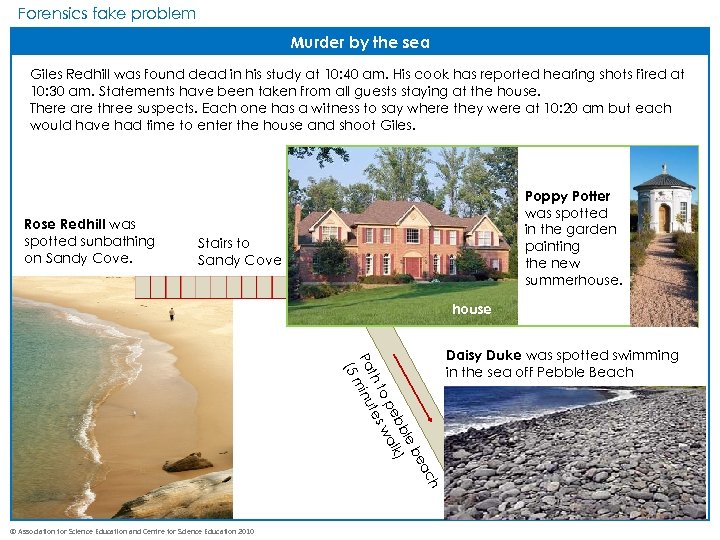 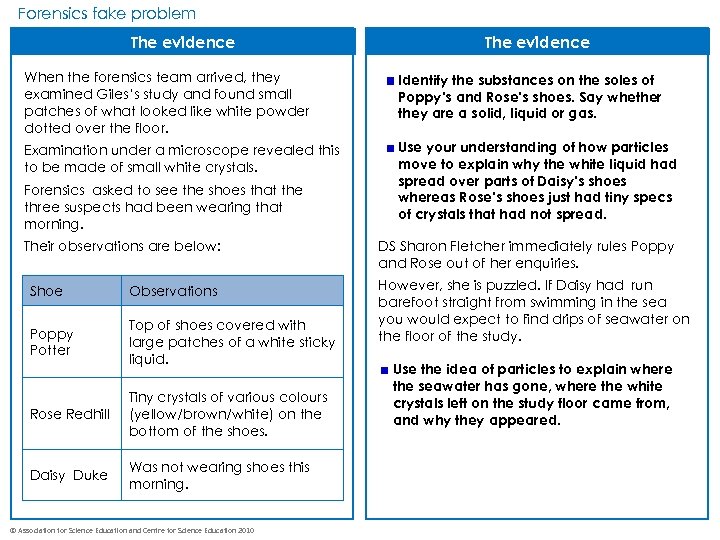 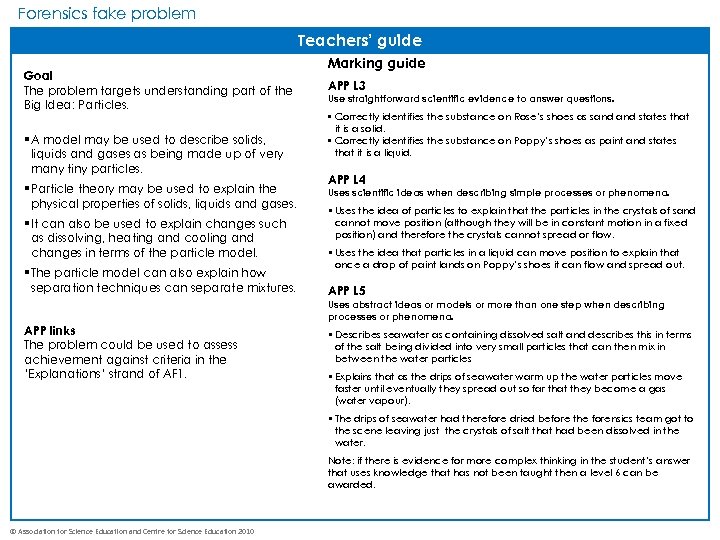 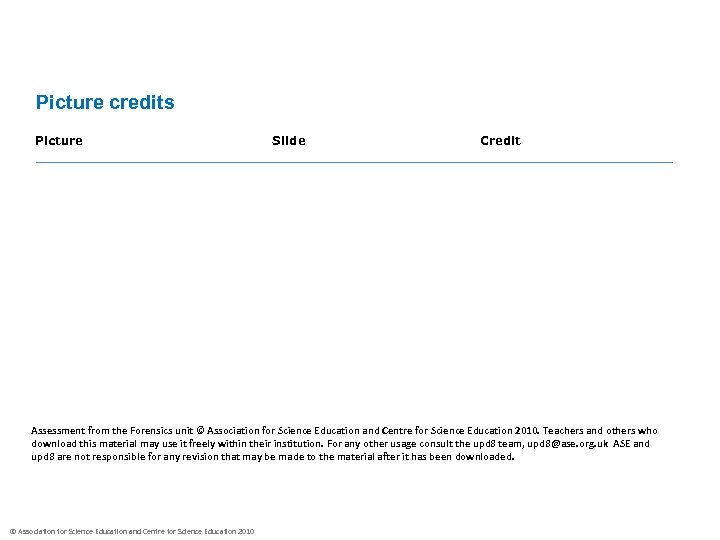 Forensics fake problem Murder by the sea Giles Redhill was found dead in his study at 10: 40 am. His cook has reported hearing shots fired at 10: 30 am. Statements have been taken from all guests staying at the house. There are three suspects. Each one has a witness to say where they were at 10: 20 am but each would have had time to enter the house and shoot Giles. Rose Redhill was spotted sunbathing on Sandy Cove. Poppy Potter was spotted in the garden painting the new summerhouse. Stairs to Sandy Cove house ch a be le bb ) pe alk to es w t th Pa minu (5 © Association for Science Education and Centre for Science Education 2010 Daisy Duke was spotted swimming in the sea off Pebble Beach

Forensics fake problem The evidence When the forensics team arrived, they examined Giles’s study and found small patches of what looked like white powder dotted over the floor. Identify the substances on the soles of Poppy’s and Rose’s shoes. Say whether they are a solid, liquid or gas. Examination under a microscope revealed this to be made of small white crystals. Use your understanding of how particles move to explain why the white liquid had spread over parts of Daisy’s shoes whereas Rose’s shoes just had tiny specs of crystals that had not spread. Forensics asked to see the shoes that the three suspects had been wearing that morning. Their observations are below: Shoe Observations Poppy Potter Top of shoes covered with large patches of a white sticky liquid. Rose Redhill Tiny crystals of various colours (yellow/brown/white) on the bottom of the shoes. Daisy Duke Was not wearing shoes this morning. © Association for Science Education and Centre for Science Education 2010 DS Sharon Fletcher immediately rules Poppy and Rose out of her enquiries. However, she is puzzled. If Daisy had run barefoot straight from swimming in the sea you would expect to find drips of seawater on the floor of the study. Use the idea of particles to explain where the seawater has gone, where the white crystals left on the study floor came from, and why they appeared.

Forensics fake problem Teachers’ guide Goal The problem targets understanding part of the Big Idea: Particles. § A model may be used to describe solids, liquids and gases as being made up of very many tiny particles. § Particle theory may be used to explain the physical properties of solids, liquids and gases. § It can also be used to explain changes such as dissolving, heating and cooling and changes in terms of the particle model. § The particle model can also explain how separation techniques can separate mixtures. Marking guide APP L 3 Use straightforward scientific evidence to answer questions. • Correctly identifies the substance on Rose’s shoes as sand states that it is a solid. • Correctly identifies the substance on Poppy’s shoes as paint and states that it is a liquid. APP L 4 Uses scientific ideas when describing simple processes or phenomena. § Uses the idea of particles to explain that the particles in the crystals of sand cannot move position (although they will be in constant motion in a fixed position) and therefore the crystals cannot spread or flow. § Uses the idea that particles in a liquid can move position to explain that once a drop of paint lands on Poppy’s shoes it can flow and spread out. APP L 5 Uses abstract ideas or models or more than one step when describing processes or phenomena. APP links The problem could be used to assess achievement against criteria in the ‘Explanations’ strand of AF 1. § Describes seawater as containing dissolved salt and describes this in terms of the salt being divided into very small particles that can then mix in between the water particles § Explains that as the drips of seawater warm up the water particles move faster until eventually they spread out so far that they become a gas (water vapour). § The drips of seawater had therefore dried before the forensics team got to the scene leaving just the crystals of salt that had been dissolved in the water. Note: if there is evidence for more complex thinking in the student’s answer that uses knowledge that has not been taught then a level 6 can be awarded. © Association for Science Education and Centre for Science Education 2010