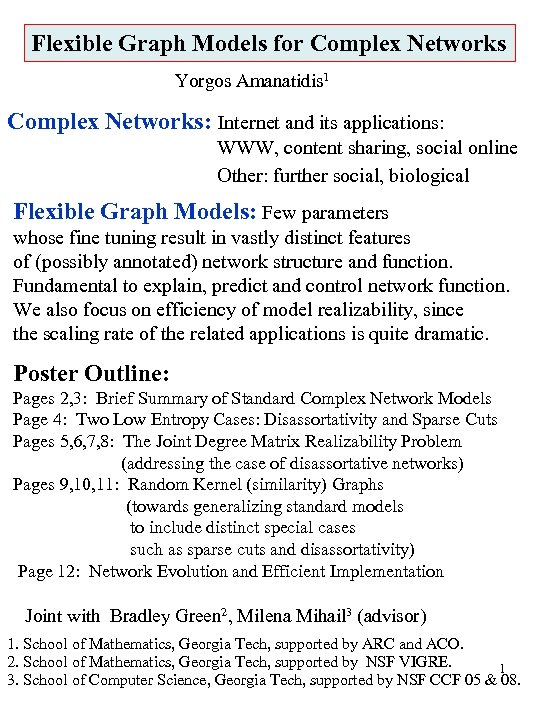 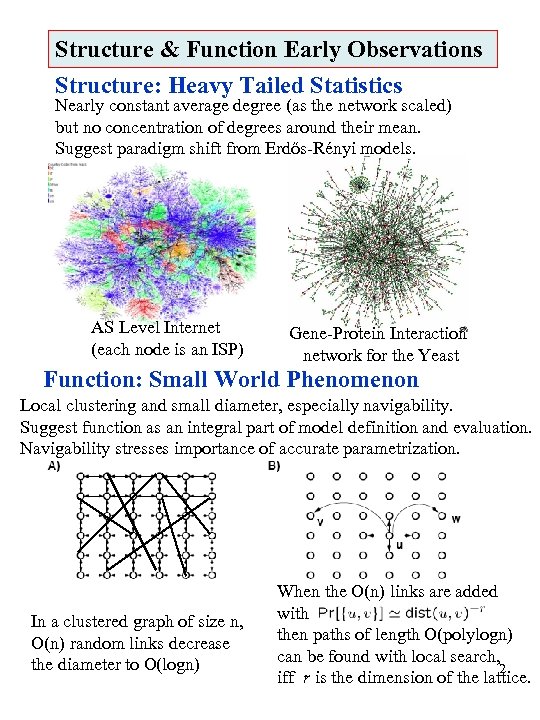 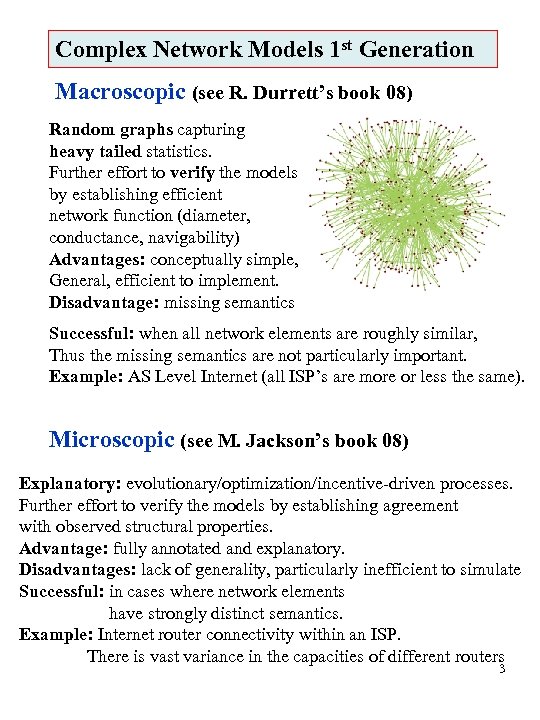 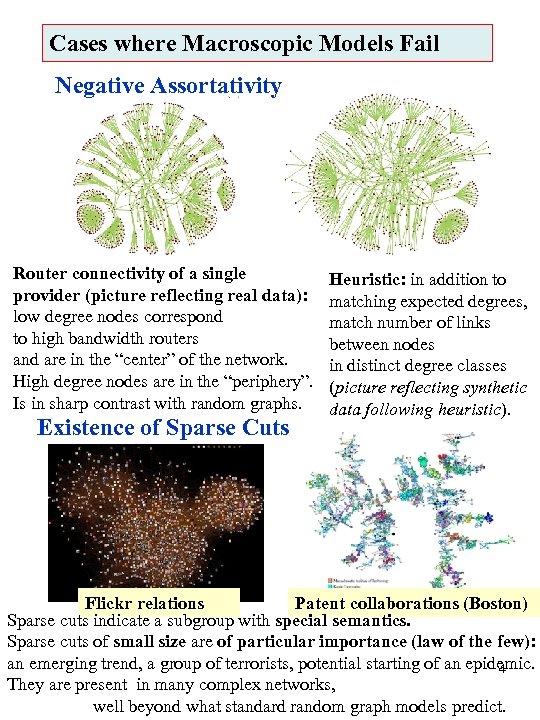 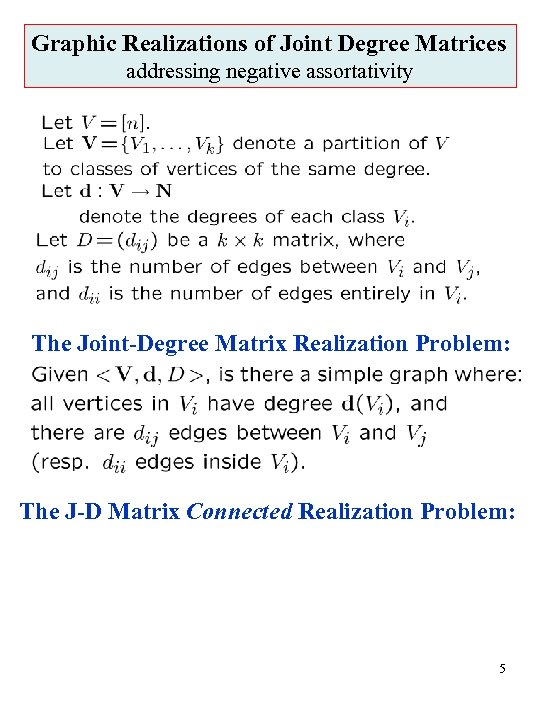 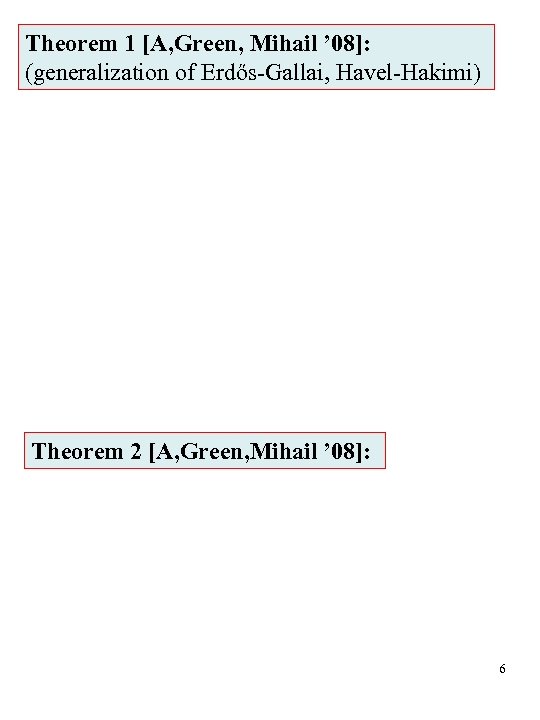 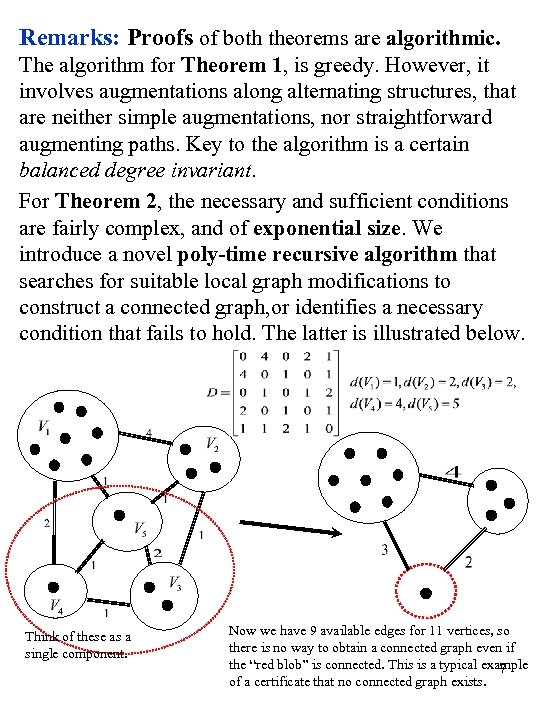 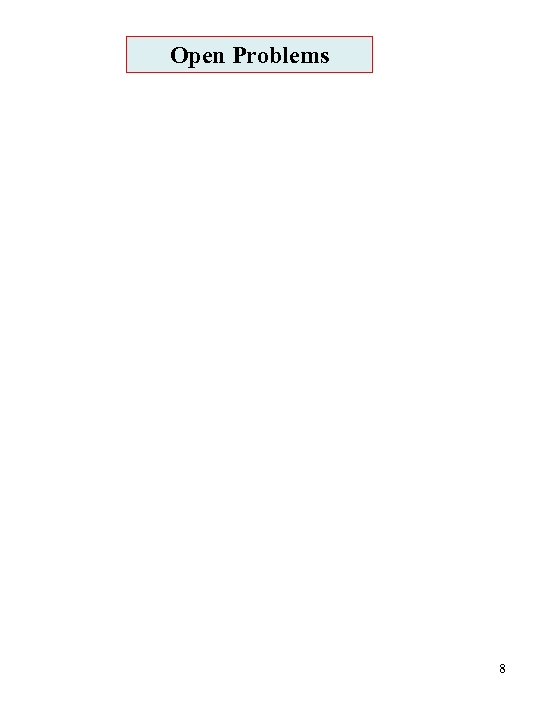 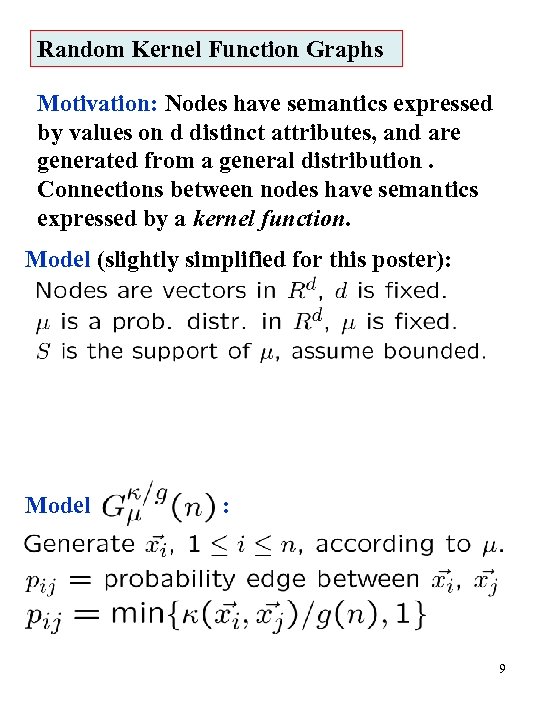 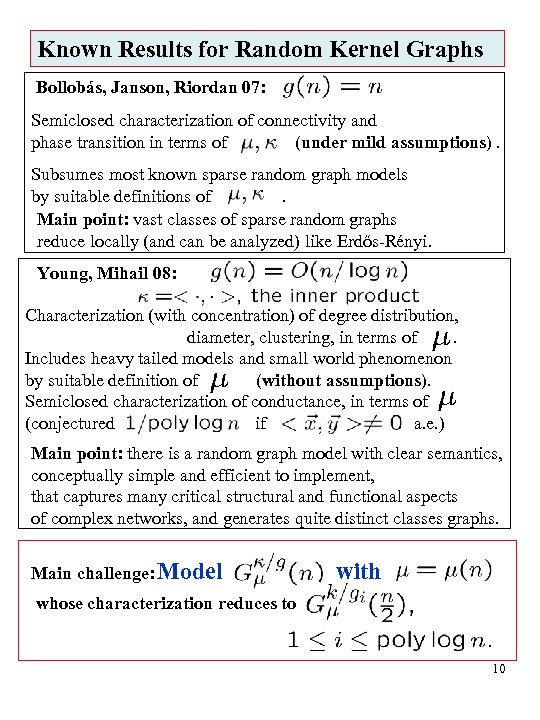 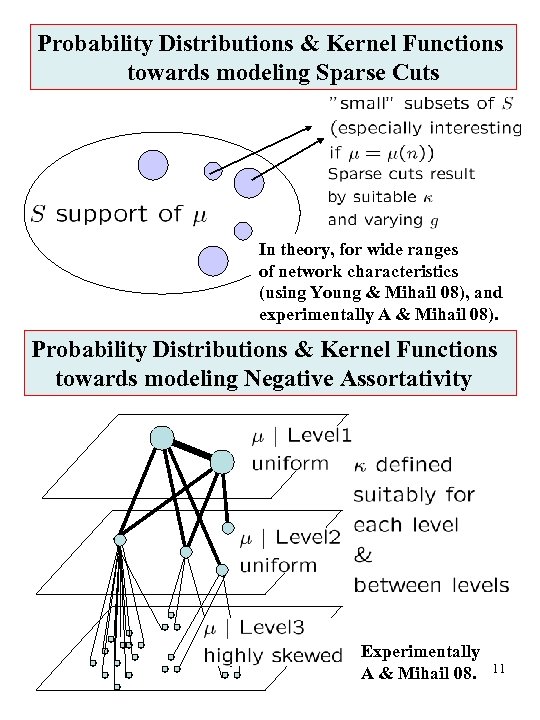 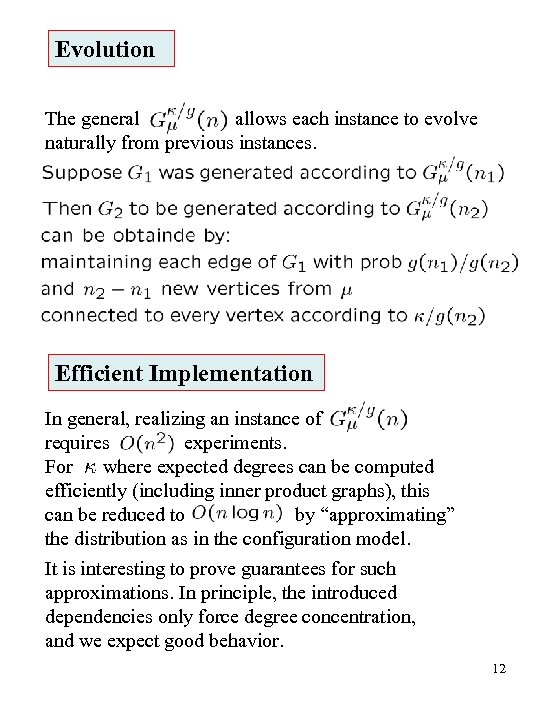 Structure & Function Early Observations Structure: Heavy Tailed Statistics Nearly constant average degree (as the network scaled) but no concentration of degrees around their mean. Suggest paradigm shift from Erdős-Rényi models. AS Level Internet (each node is an ISP) Gene-Protein Interaction network for the Yeast Function: Small World Phenomenon Local clustering and small diameter, especially navigability. Suggest function as an integral part of model definition and evaluation. Navigability stresses importance of accurate parametrization. In a clustered graph of size n, O(n) random links decrease the diameter to O(logn) When the O(n) links are added with then paths of length O(polylogn) can be found with local search, 2 iff r is the dimension of the lattice.

Cases where Macroscopic Models Fail Negative Assortativity Router connectivity of a single provider (picture reflecting real data): low degree nodes correspond to high bandwidth routers and are in the “center” of the network. High degree nodes are in the “periphery”. Is in sharp contrast with random graphs. Existence of Sparse Cuts Heuristic: in addition to matching expected degrees, match number of links between nodes in distinct degree classes (picture reflecting synthetic data following heuristic). Flickr relations Patent collaborations (Boston) Sparse cuts indicate a subgroup with special semantics. Sparse cuts of small size are of particular importance (law of the few): an emerging trend, a group of terrorists, potential starting of an epidemic. 4 They are present in many complex networks, well beyond what standard random graph models predict.

Remarks: Proofs of both theorems are algorithmic. The algorithm for Theorem 1, is greedy. However, it involves augmentations along alternating structures, that are neither simple augmentations, nor straightforward augmenting paths. Key to the algorithm is a certain balanced degree invariant. For Theorem 2, the necessary and sufficient conditions are fairly complex, and of exponential size. We introduce a novel poly-time recursive algorithm that searches for suitable local graph modifications to construct a connected graph, or identifies a necessary condition that fails to hold. The latter is illustrated below. Think of these as a single component. Now we have 9 available edges for 11 vertices, so there is no way to obtain a connected graph even if the “red blob” is connected. This is a typical example 7 of a certificate that no connected graph exists.

Known Results for Random Kernel Graphs Bollobás, Janson, Riordan 07: Semiclosed characterization of connectivity and phase transition in terms of (under mild assumptions). Subsumes most known sparse random graph models by suitable definitions of. Main point: vast classes of sparse random graphs reduce locally (and can be analyzed) like Erdős-Rényi. Young, Mihail 08: Characterization (with concentration) of degree distribution, diameter, clustering, in terms of. Includes heavy tailed models and small world phenomenon by suitable definition of (without assumptions). Semiclosed characterization of conductance, in terms of (conjectured if a. e. ) Main point: there is a random graph model with clear semantics, conceptually simple and efficient to implement, that captures many critical structural and functional aspects of complex networks, and generates quite distinct classes graphs. Main challenge: Model with whose characterization reduces to 10

Evolution The general allows each instance to evolve naturally from previous instances. Efficient Implementation In general, realizing an instance of requires experiments. For where expected degrees can be computed efficiently (including inner product graphs), this can be reduced to by “approximating” the distribution as in the configuration model. It is interesting to prove guarantees for such approximations. In principle, the introduced dependencies only force degree concentration, and we expect good behavior. 12