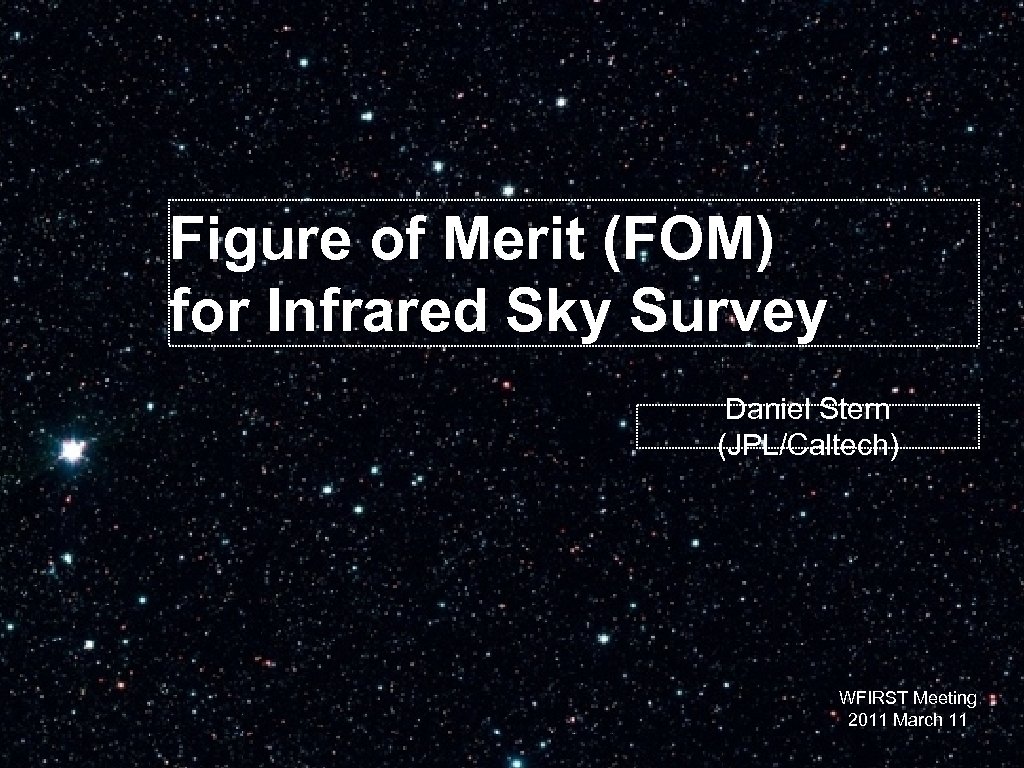 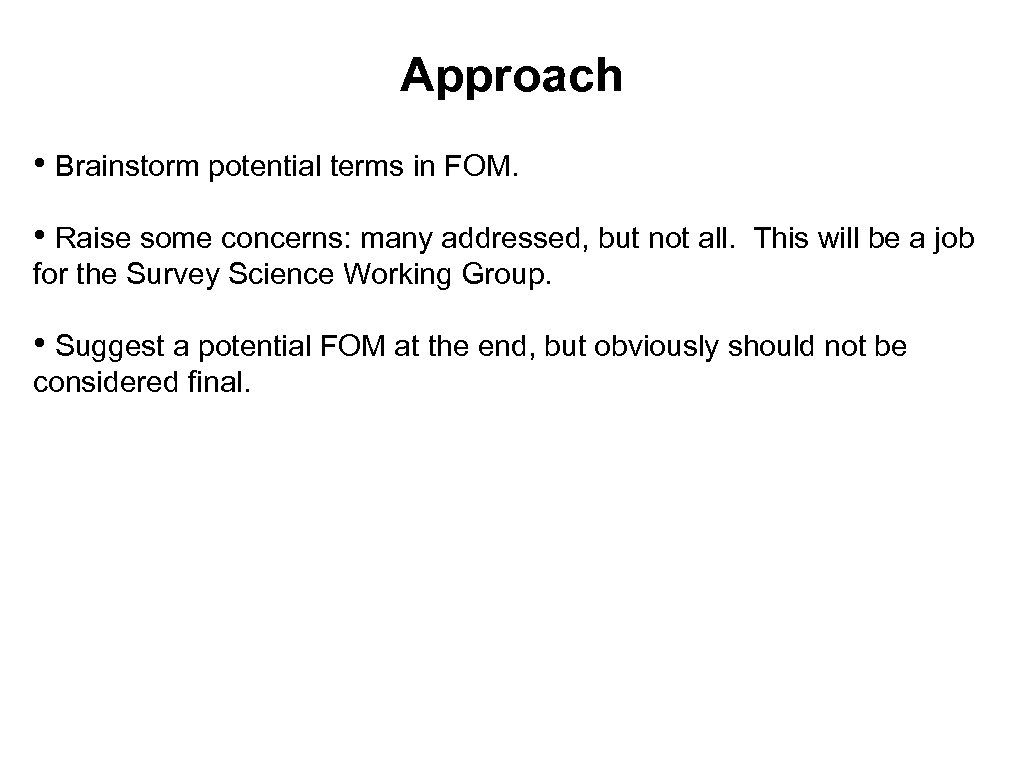 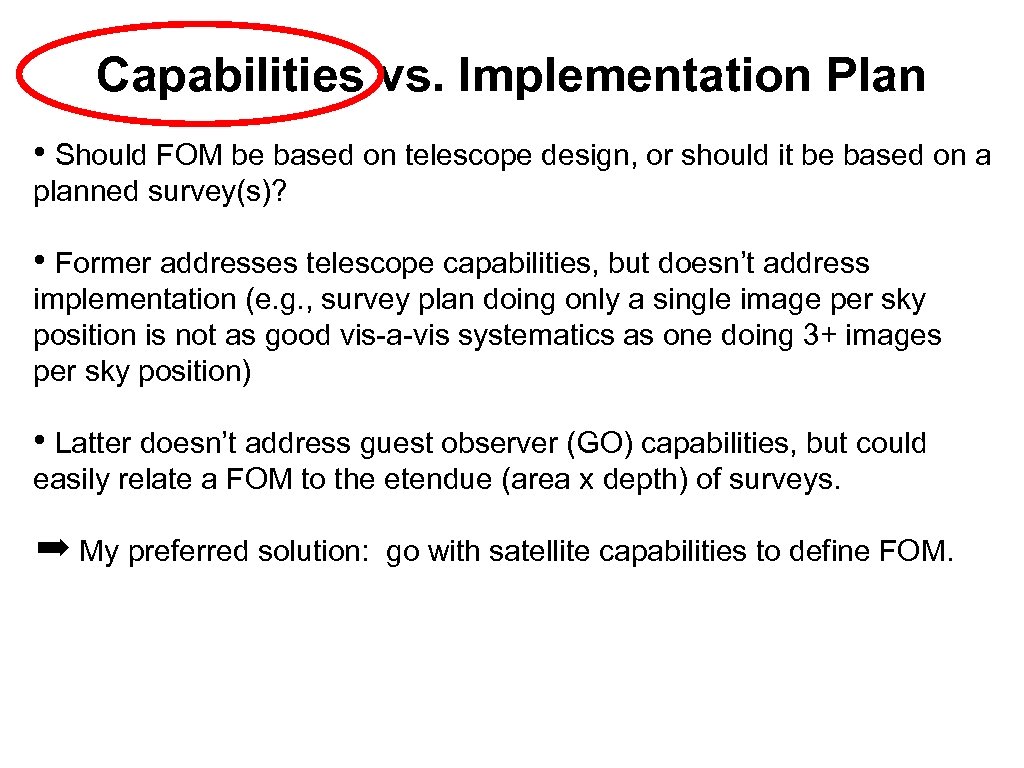 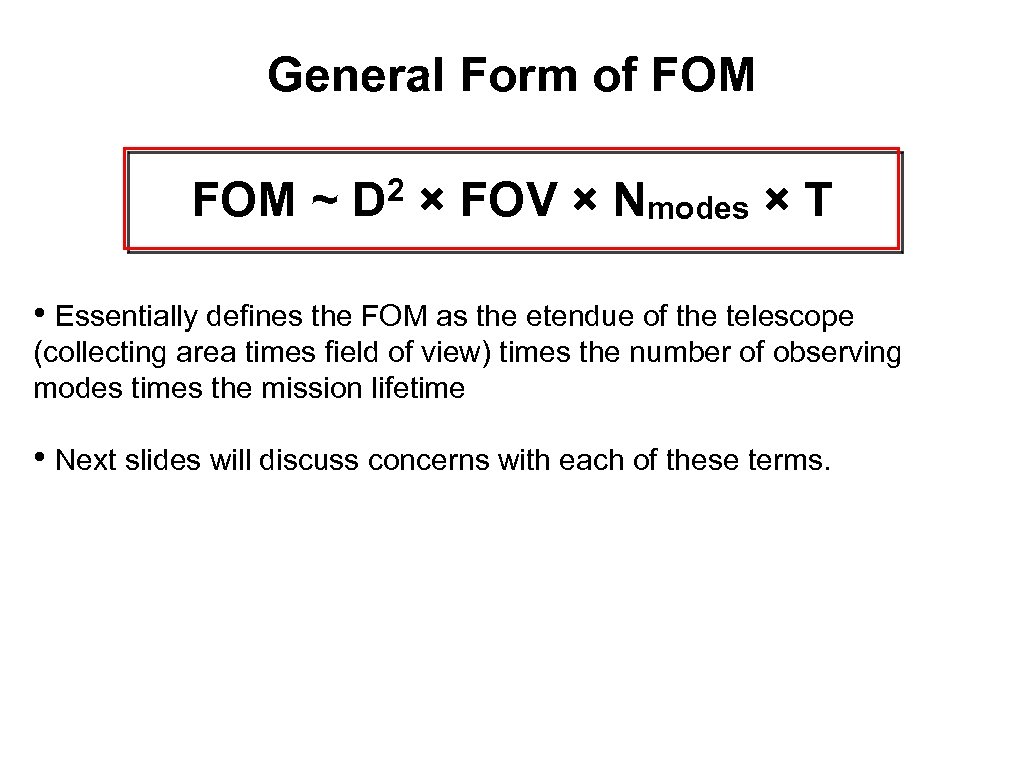 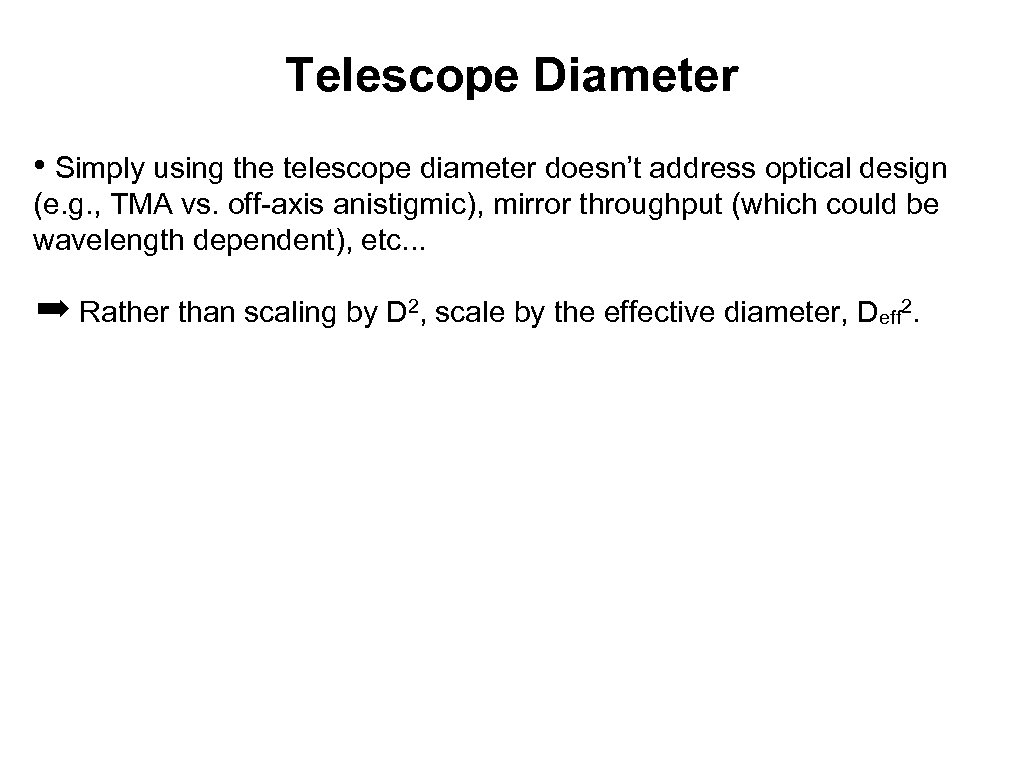 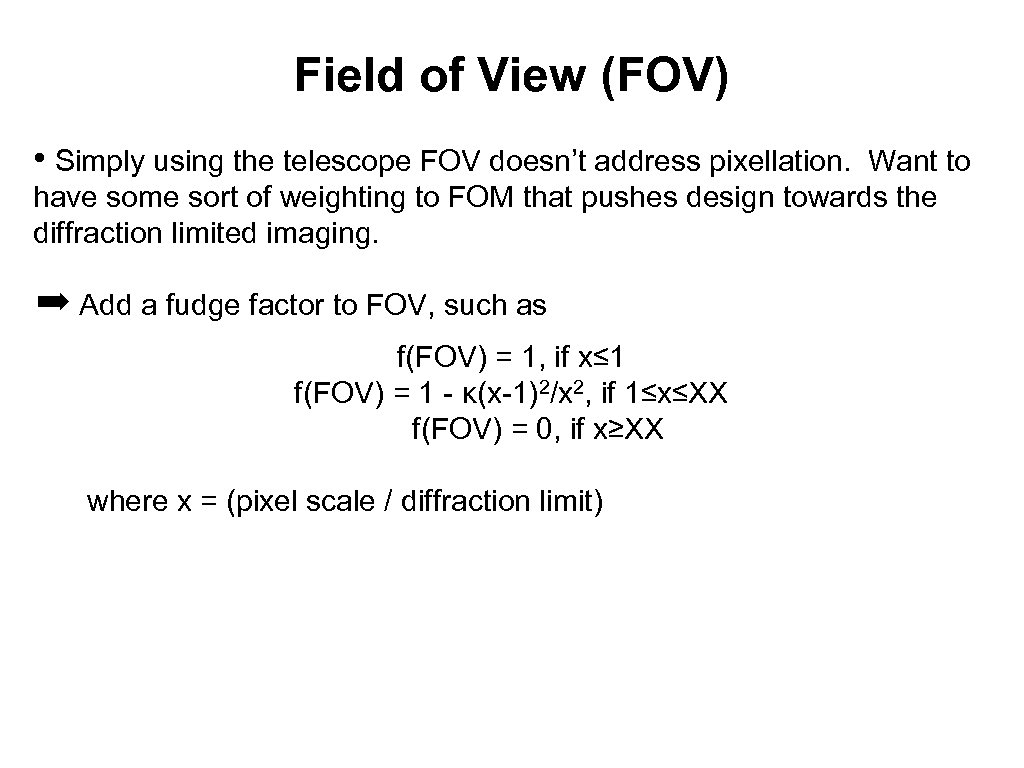 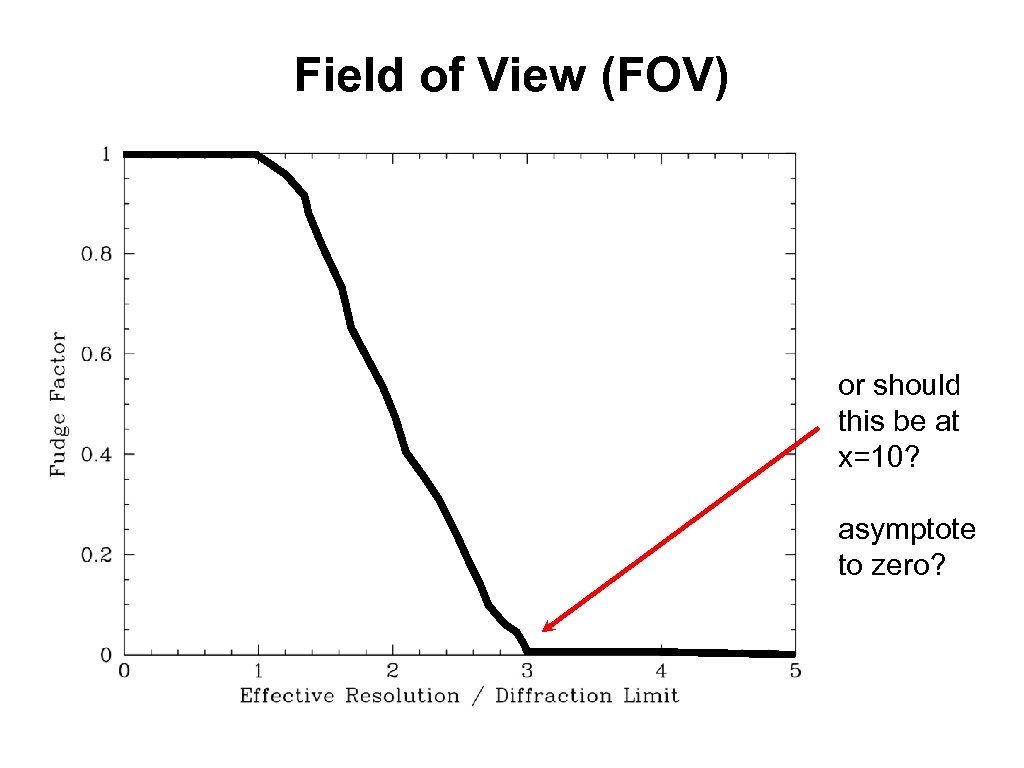 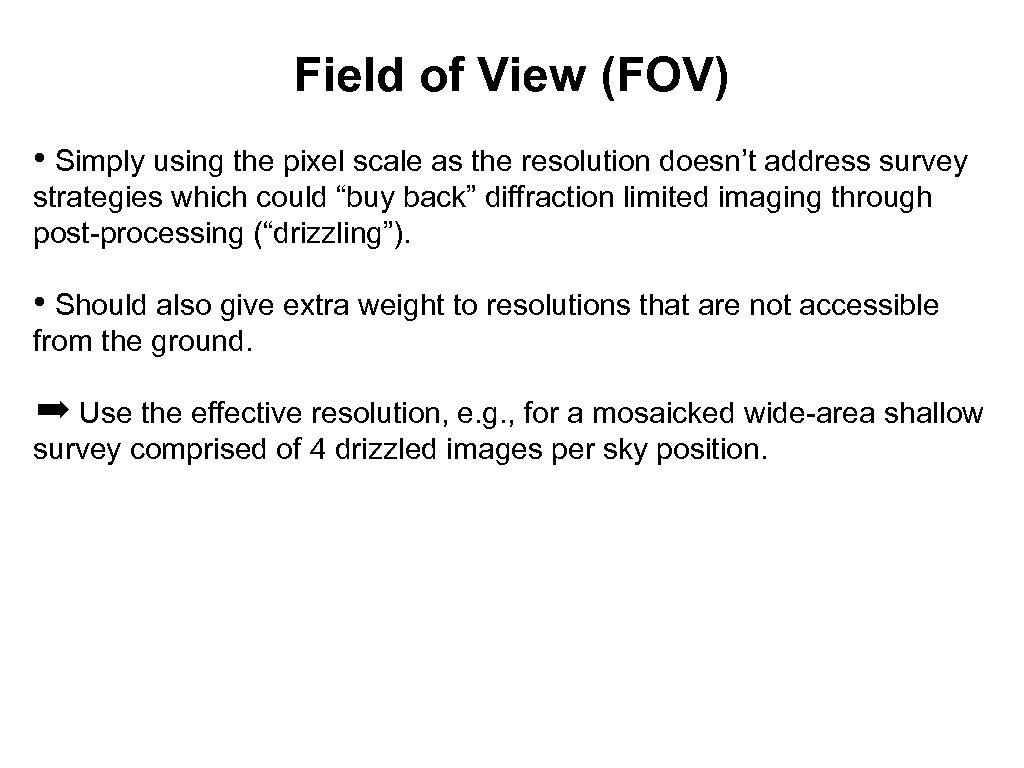 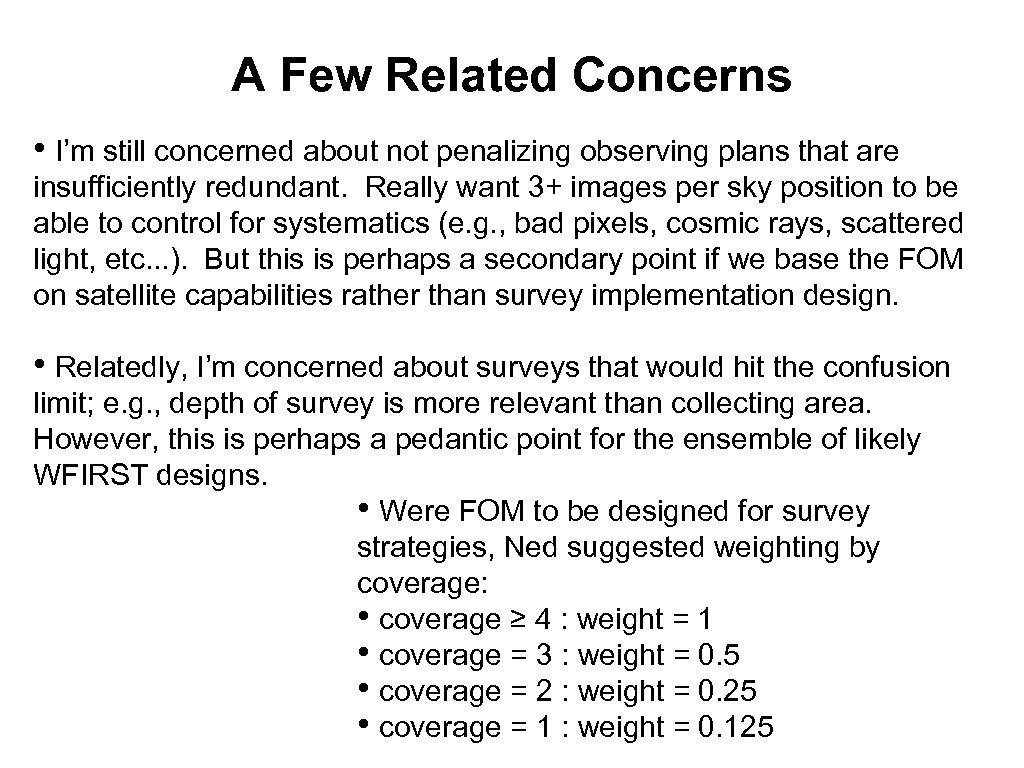 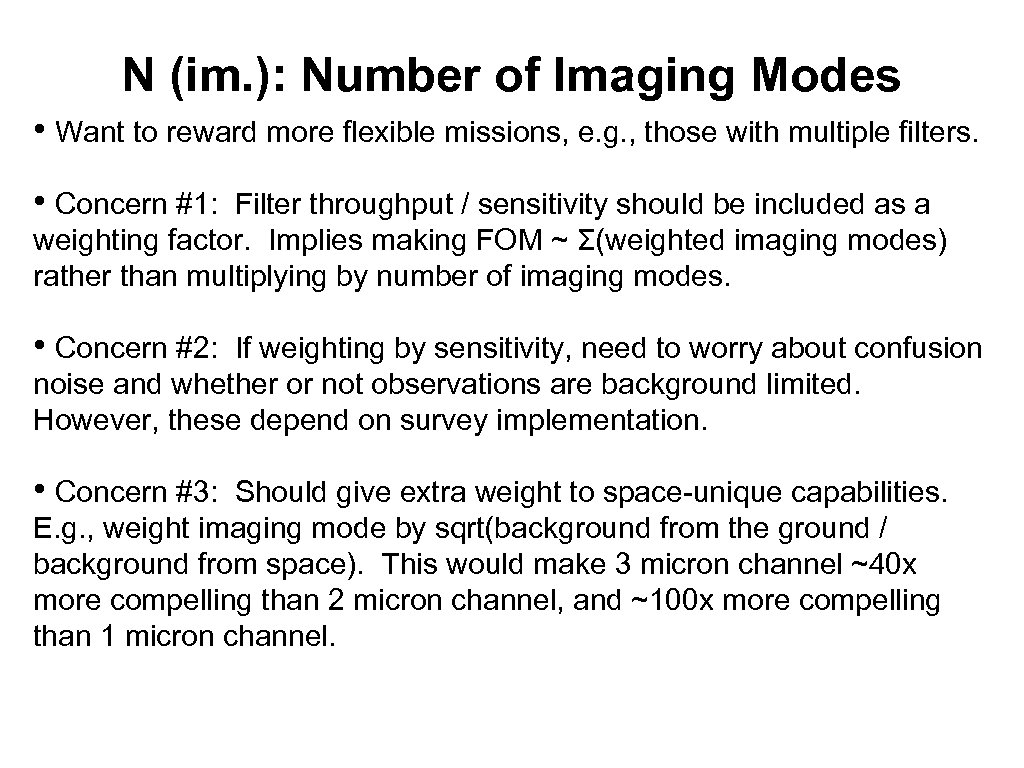 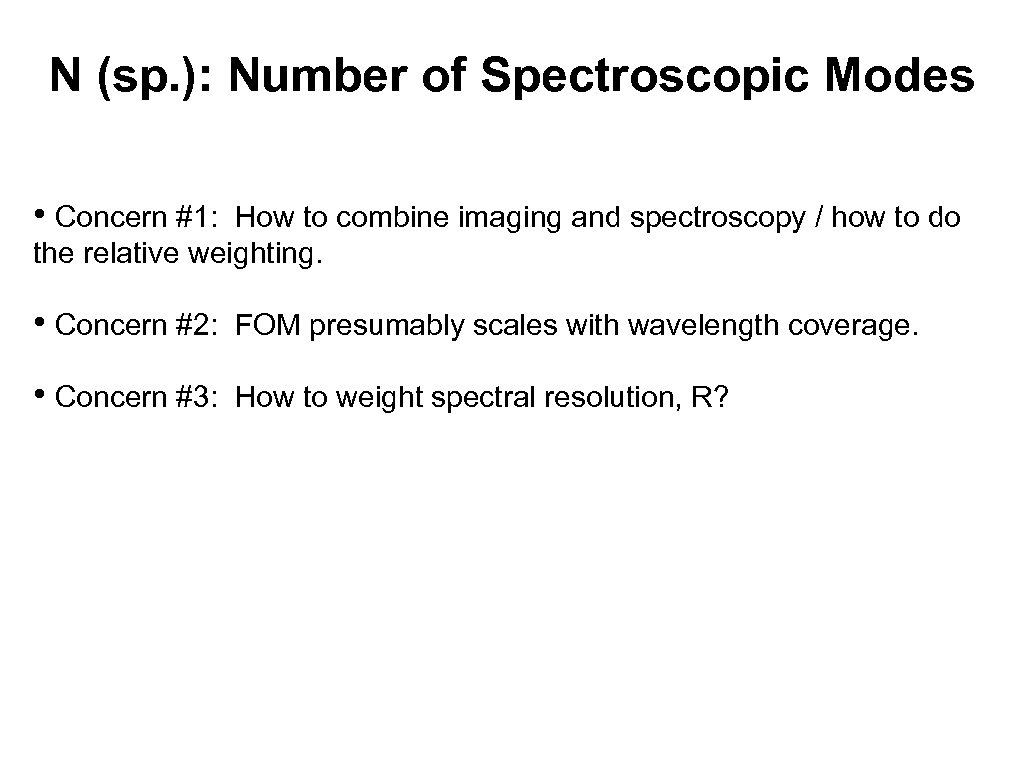 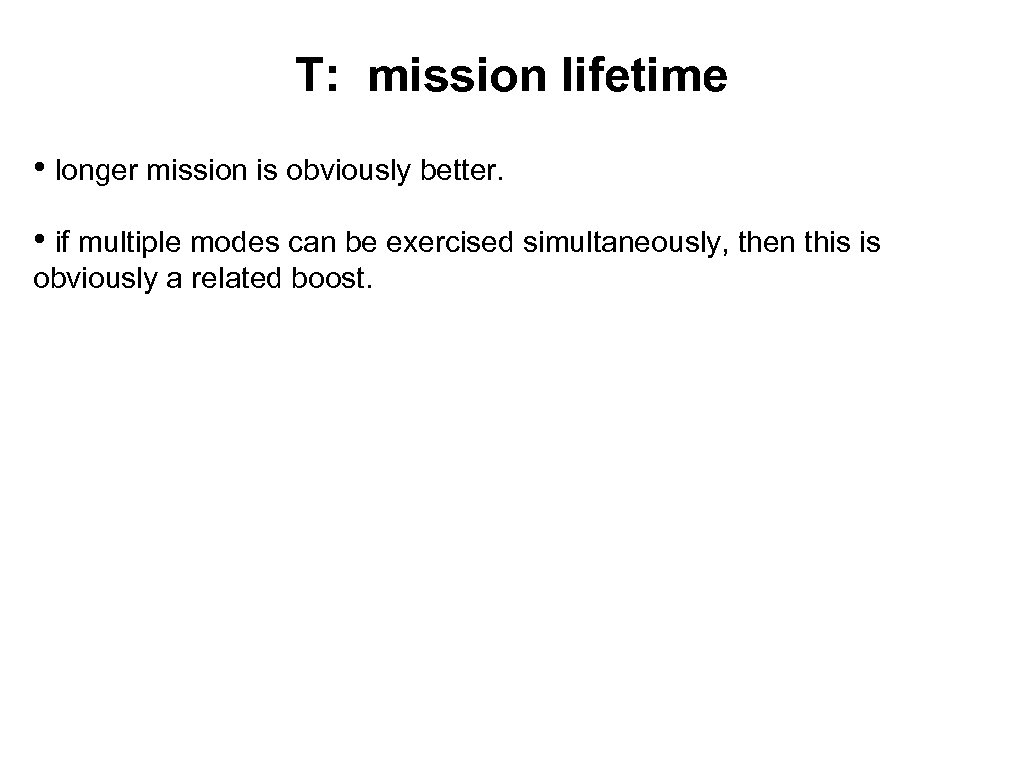 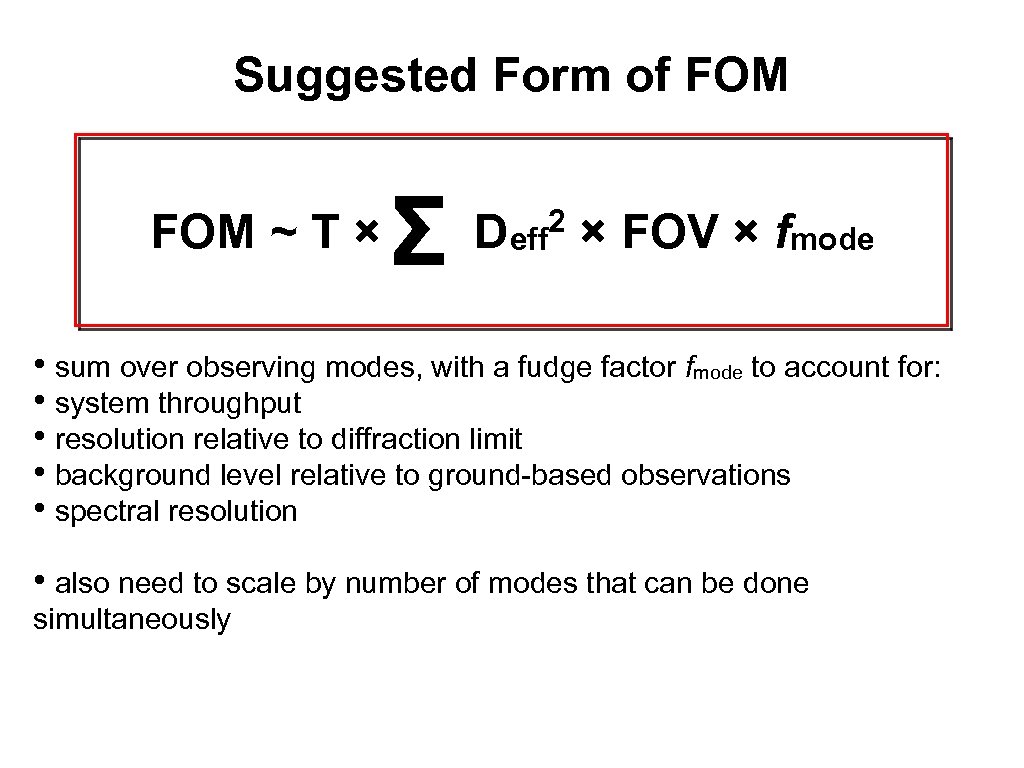 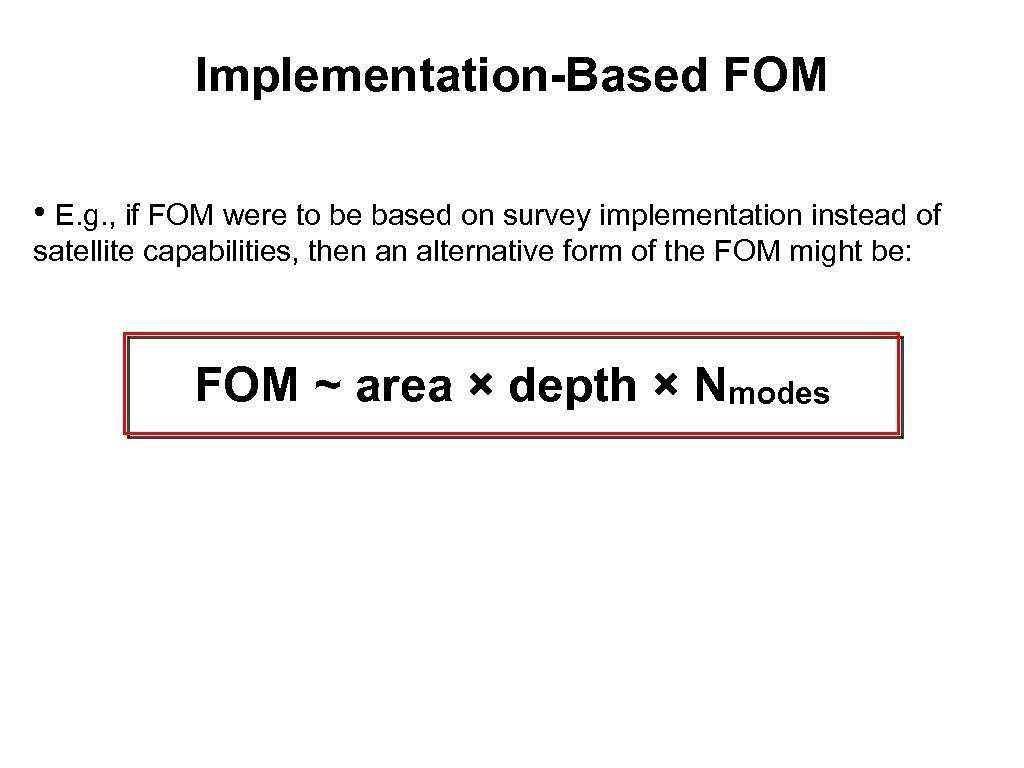 Approach • Brainstorm potential terms in FOM. • Raise some concerns: many addressed, but not all. This will be a job for the Survey Science Working Group. • Suggest a potential FOM at the end, but obviously should not be considered final.

Capabilities vs. Implementation Plan • Should FOM be based on telescope design, or should it be based on a planned survey(s)? • Former addresses telescope capabilities, but doesn’t address implementation (e. g. , survey plan doing only a single image per sky position is not as good vis-a-vis systematics as one doing 3+ images per sky position) • Latter doesn’t address guest observer (GO) capabilities, but could easily relate a FOM to the etendue (area x depth) of surveys. ➡ My preferred solution: go with satellite capabilities to define FOM.

General Form of FOM ~ 2 D × FOV × Nmodes × T • Essentially defines the FOM as the etendue of the telescope (collecting area times field of view) times the number of observing modes times the mission lifetime • Next slides will discuss concerns with each of these terms.

Field of View (FOV) or should this be at x=10? asymptote to zero?

Field of View (FOV) • Simply using the pixel scale as the resolution doesn’t address survey strategies which could “buy back” diffraction limited imaging through post-processing (“drizzling”). • Should also give extra weight to resolutions that are not accessible from the ground. ➡ Use the effective resolution, e. g. , for a mosaicked wide-area shallow survey comprised of 4 drizzled images per sky position.

A Few Related Concerns • I’m still concerned about not penalizing observing plans that are insufficiently redundant. Really want 3+ images per sky position to be able to control for systematics (e. g. , bad pixels, cosmic rays, scattered light, etc. . . ). But this is perhaps a secondary point if we base the FOM on satellite capabilities rather than survey implementation design. • Relatedly, I’m concerned about surveys that would hit the confusion limit; e. g. , depth of survey is more relevant than collecting area. However, this is perhaps a pedantic point for the ensemble of likely WFIRST designs. • Were FOM to be designed for survey strategies, Ned suggested weighting by coverage: • coverage ≥ 4 : weight = 1 • coverage = 3 : weight = 0. 5 • coverage = 2 : weight = 0. 25 • coverage = 1 : weight = 0. 125

N (im. ): Number of Imaging Modes • Want to reward more flexible missions, e. g. , those with multiple filters. • Concern #1: Filter throughput / sensitivity should be included as a weighting factor. Implies making FOM ~ Σ(weighted imaging modes) rather than multiplying by number of imaging modes. • Concern #2: If weighting by sensitivity, need to worry about confusion noise and whether or not observations are background limited. However, these depend on survey implementation. • Concern #3: Should give extra weight to space-unique capabilities. E. g. , weight imaging mode by sqrt(background from the ground / background from space). This would make 3 micron channel ~40 x more compelling than 2 micron channel, and ~100 x more compelling than 1 micron channel.

N (sp. ): Number of Spectroscopic Modes • Concern #1: How to combine imaging and spectroscopy / how to do the relative weighting. • Concern #2: FOM presumably scales with wavelength coverage. • Concern #3: How to weight spectral resolution, R?

T: mission lifetime • longer mission is obviously better. • if multiple modes can be exercised simultaneously, then this is obviously a related boost. • ergo, multiple (focused) missions are also beneficial.

Implementation-Based FOM • E. g. , if FOM were to be based on survey implementation instead of satellite capabilities, then an alternative form of the FOM might be: FOM ~ area × depth × Nmodes