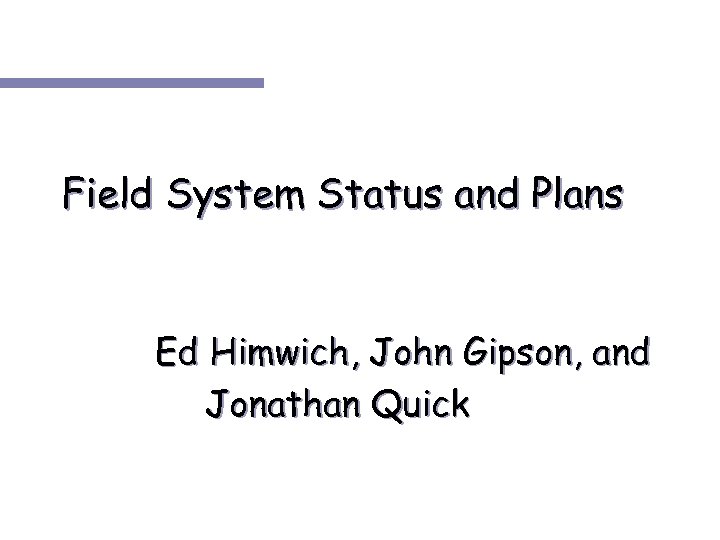 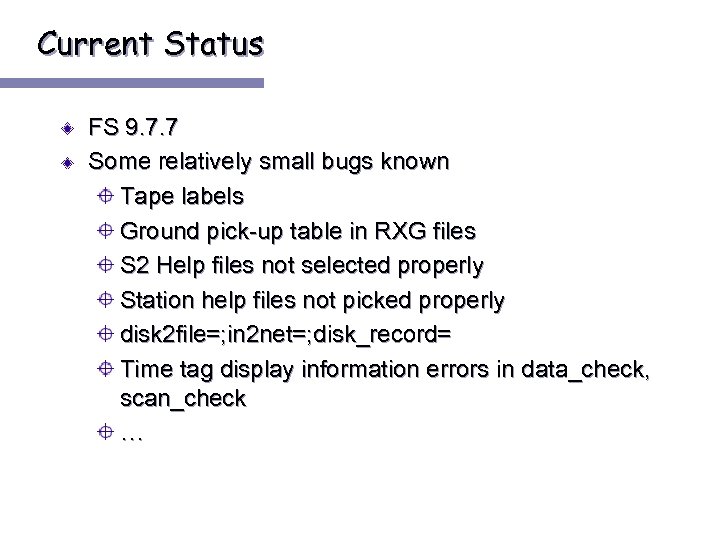 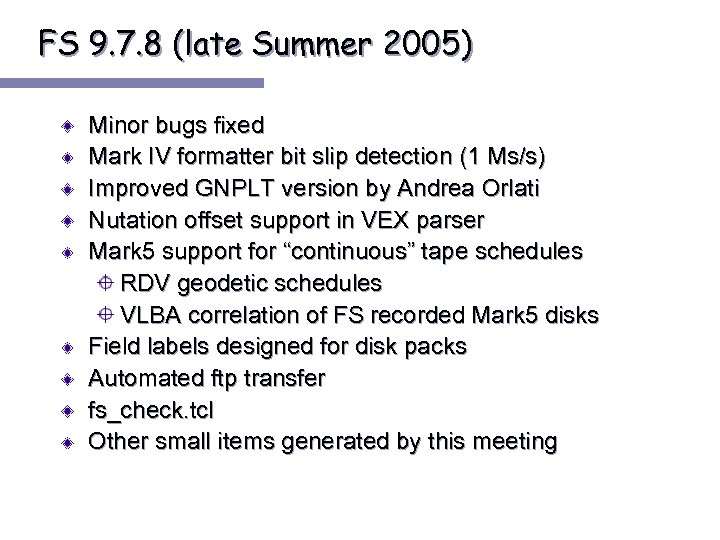 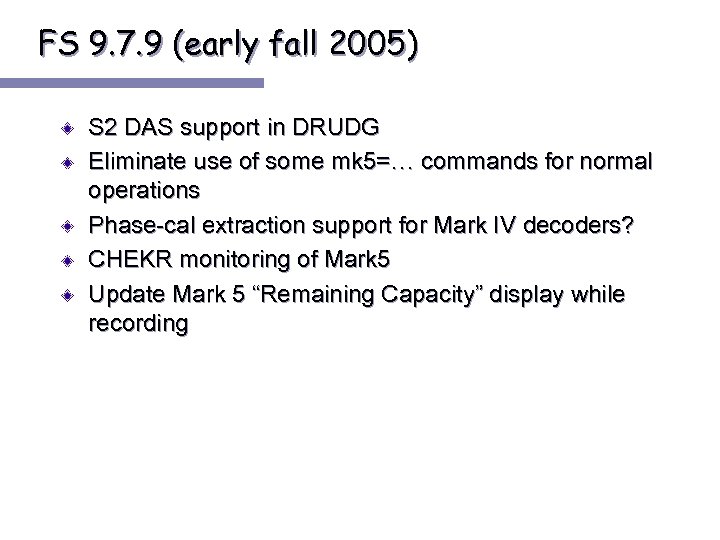 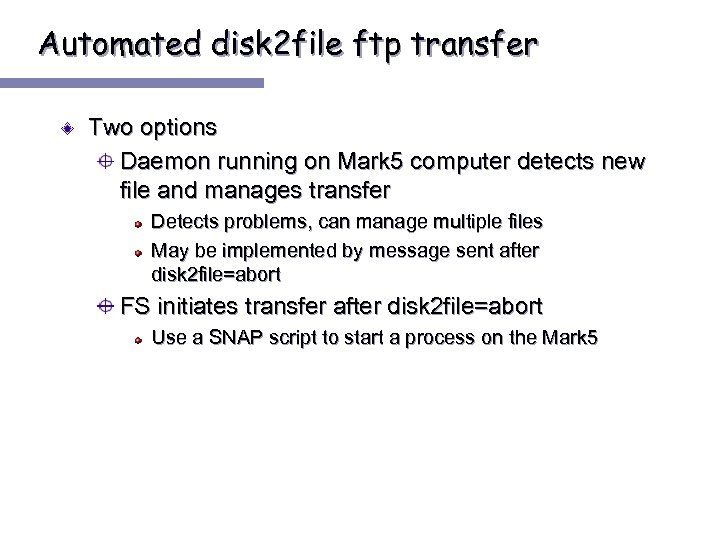 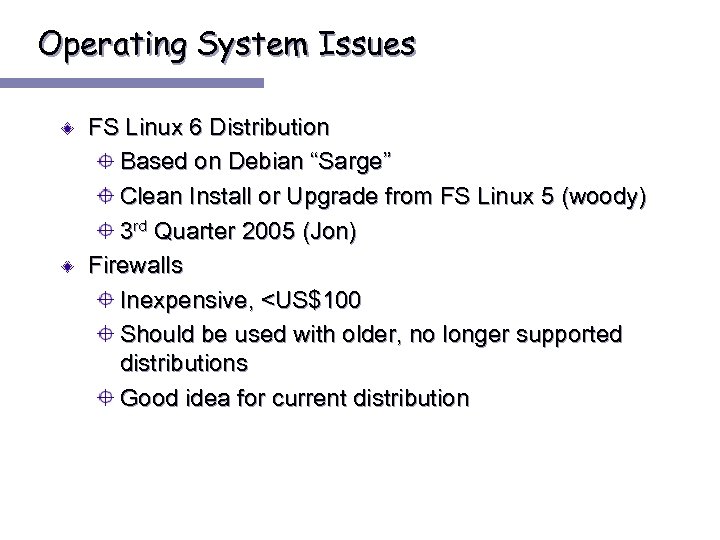 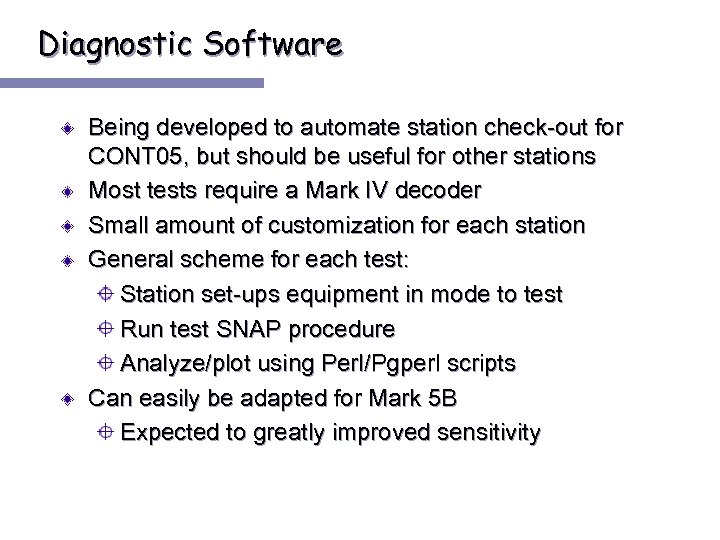 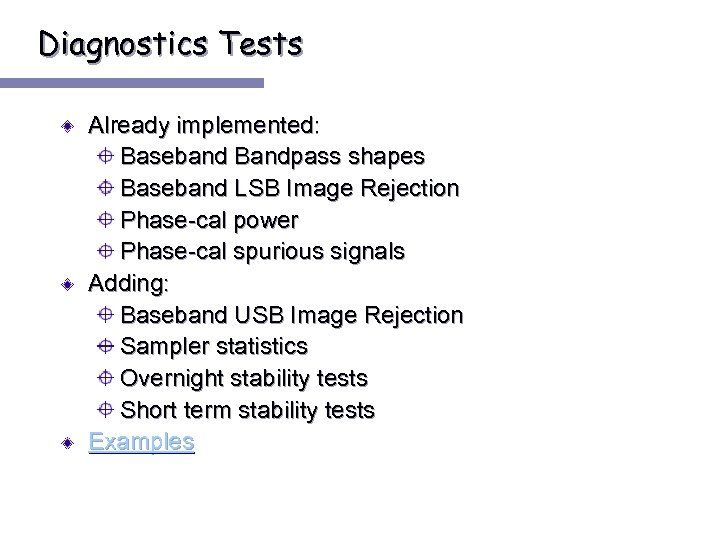 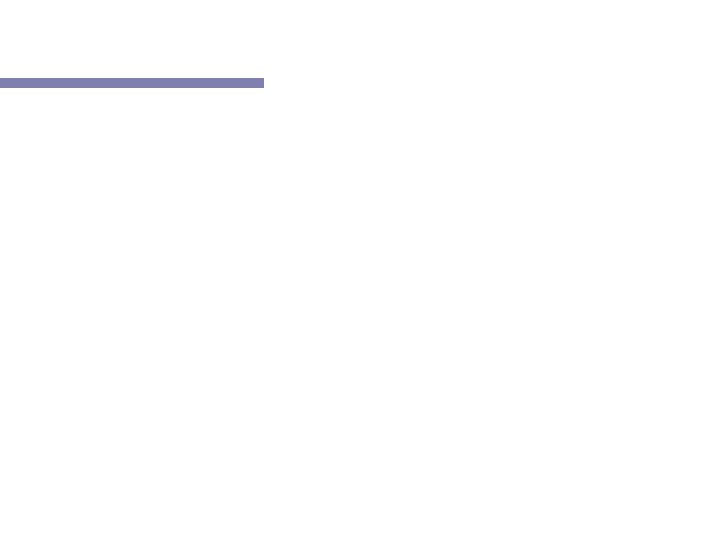 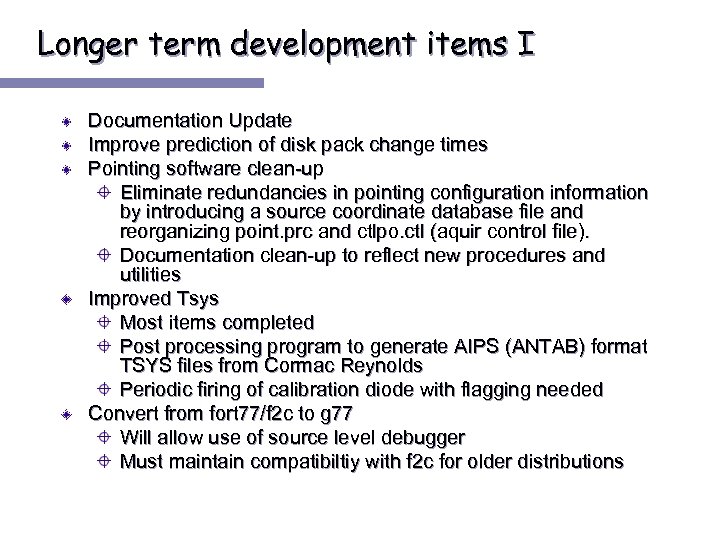 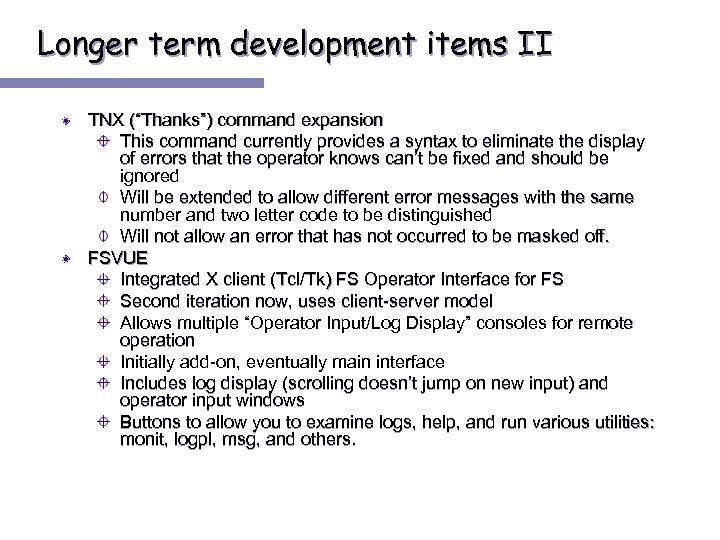 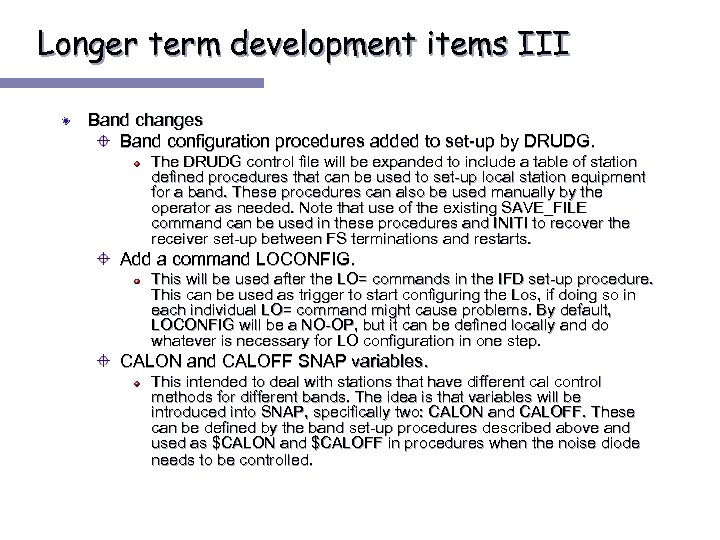 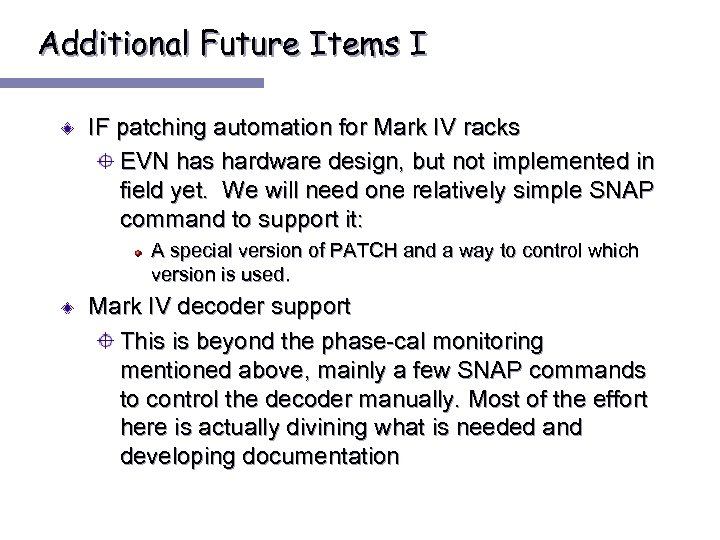 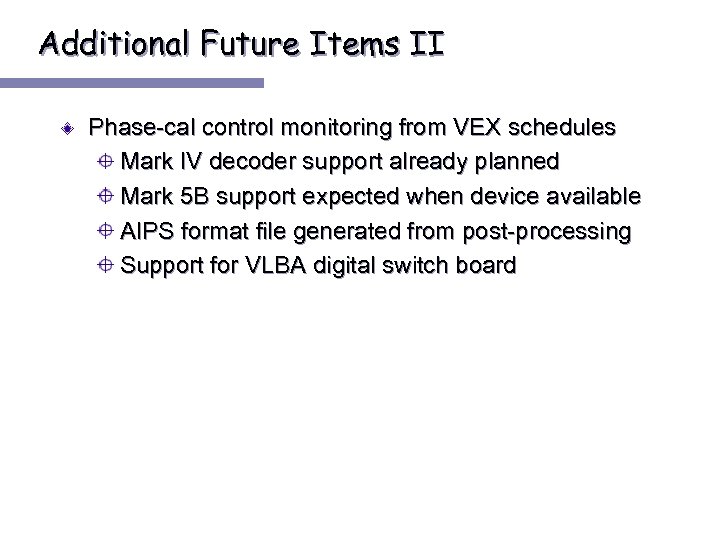 Diagnostic Software Being developed to automate station check-out for CONT 05, but should be useful for other stations Most tests require a Mark IV decoder Small amount of customization for each station General scheme for each test: Station set-ups equipment in mode to test Run test SNAP procedure Analyze/plot using Perl/Pgperl scripts Can easily be adapted for Mark 5 B Expected to greatly improved sensitivity

Longer term development items II TNX (“Thanks”) command expansion This command currently provides a syntax to eliminate the display of errors that the operator knows can’t be fixed and should be ignored Will be extended to allow different error messages with the same number and two letter code to be distinguished Will not allow an error that has not occurred to be masked off. FSVUE Integrated X client (Tcl/Tk) FS Operator Interface for FS Second iteration now, uses client-server model Allows multiple “Operator Input/Log Display” consoles for remote operation Initially add-on, eventually main interface Includes log display (scrolling doesn’t jump on new input) and operator input windows Buttons to allow you to examine logs, help, and run various utilities: monit, logpl, msg, and others.

Longer term development items III Band changes Band configuration procedures added to set-up by DRUDG. The DRUDG control file will be expanded to include a table of station defined procedures that can be used to set-up local station equipment for a band. These procedures can also be used manually by the operator as needed. Note that use of the existing SAVE_FILE command can be used in these procedures and INITI to recover the receiver set-up between FS terminations and restarts. Add a command LOCONFIG. This will be used after the LO= commands in the IFD set-up procedure. This can be used as trigger to start configuring the Los, if doing so in each individual LO= command might cause problems. By default, LOCONFIG will be a NO-OP, but it can be defined locally and do whatever is necessary for LO configuration in one step. CALON and CALOFF SNAP variables. This intended to deal with stations that have different cal control methods for different bands. The idea is that variables will be introduced into SNAP, specifically two: CALON and CALOFF. These can be defined by the band set-up procedures described above and used as $CALON and $CALOFF in procedures when the noise diode needs to be controlled.

Additional Future Items I IF patching automation for Mark IV racks EVN has hardware design, but not implemented in field yet. We will need one relatively simple SNAP command to support it: A special version of PATCH and a way to control which version is used. Mark IV decoder support This is beyond the phase-cal monitoring mentioned above, mainly a few SNAP commands to control the decoder manually. Most of the effort here is actually divining what is needed and developing documentation