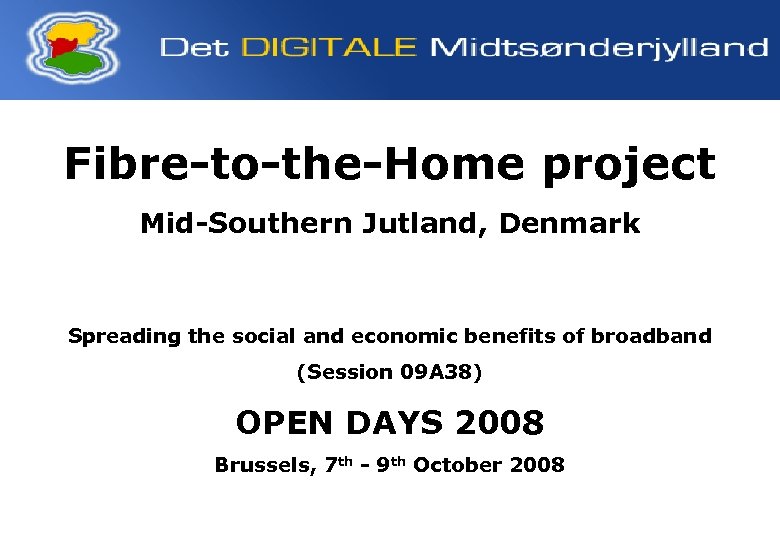 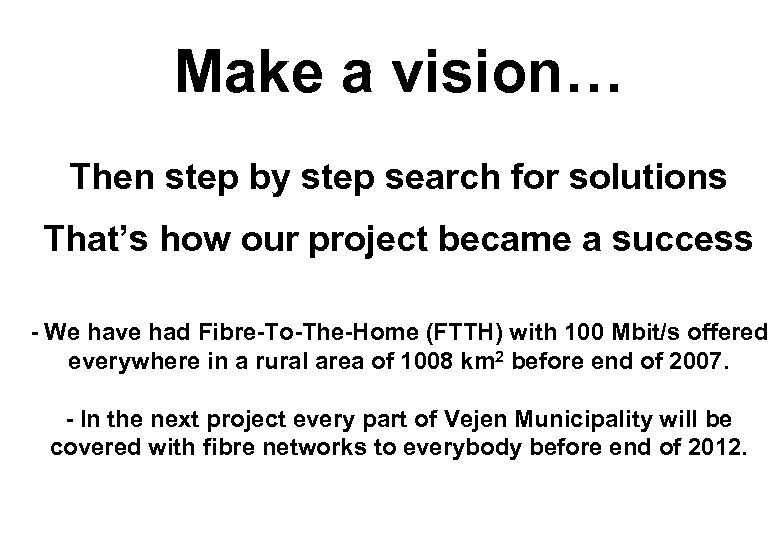 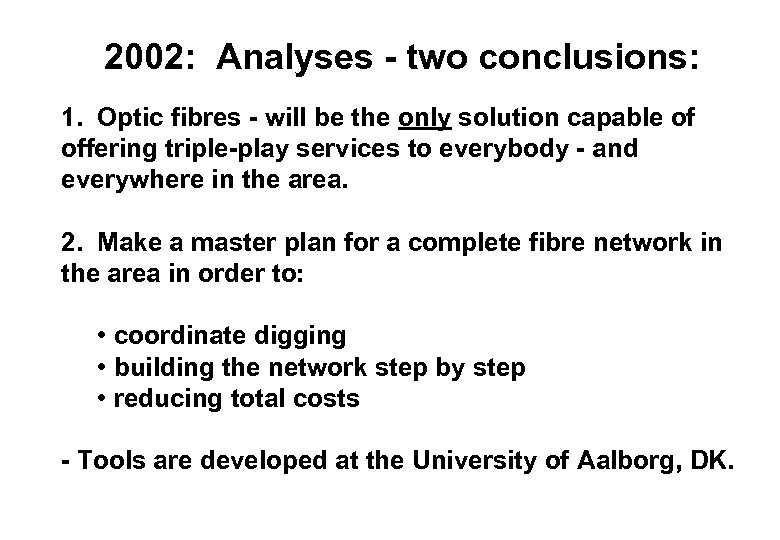 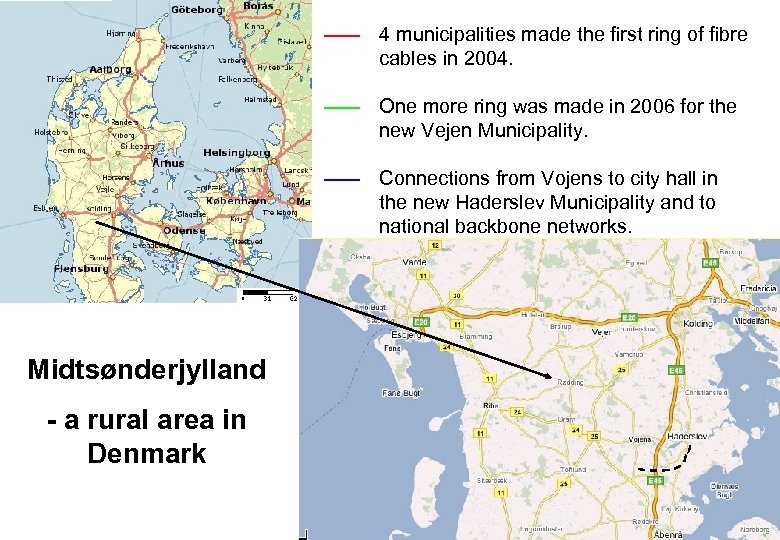 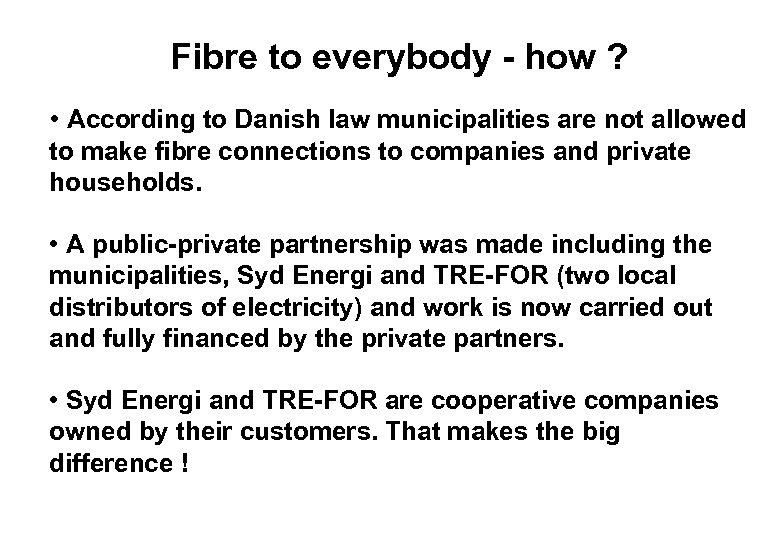 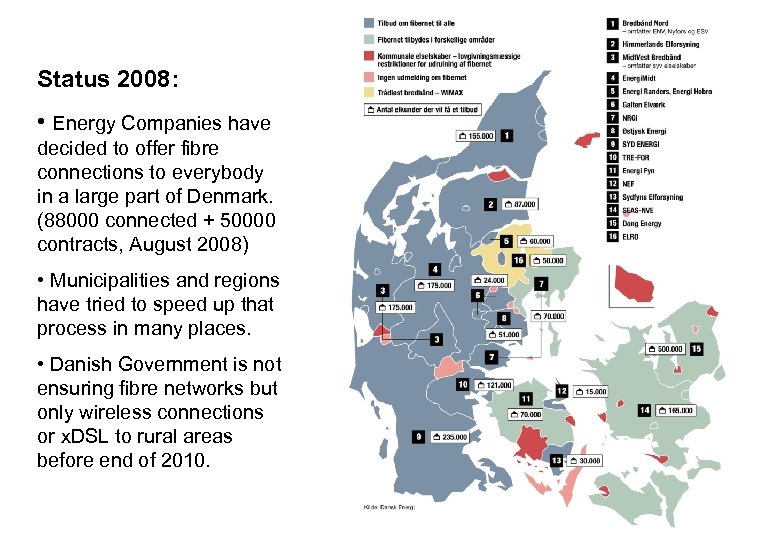 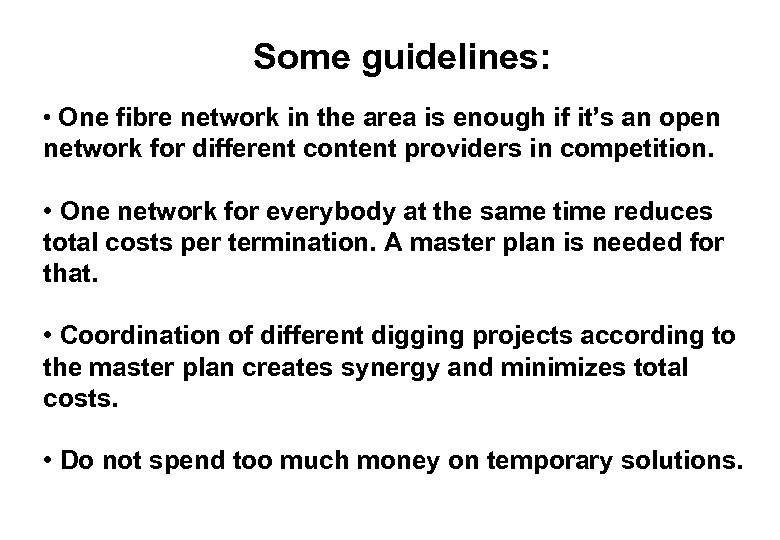 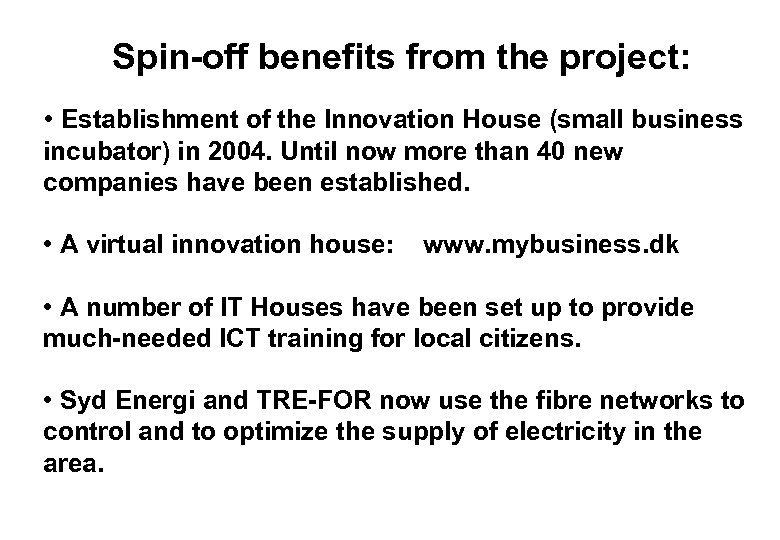 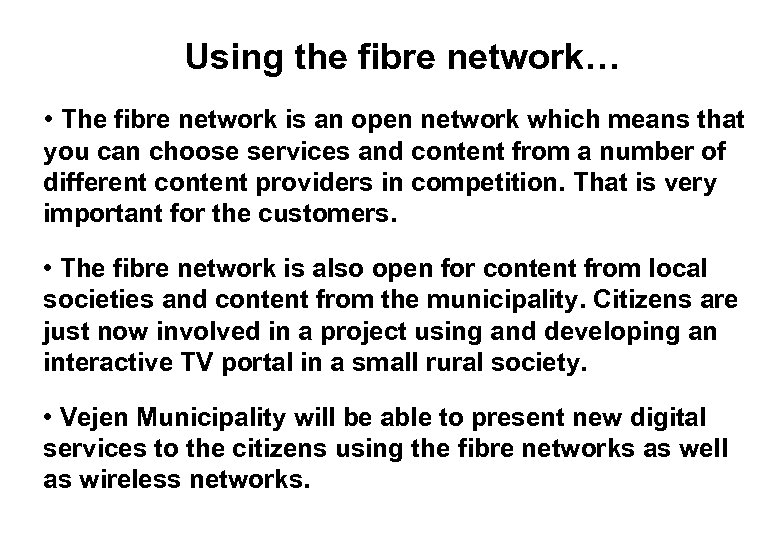 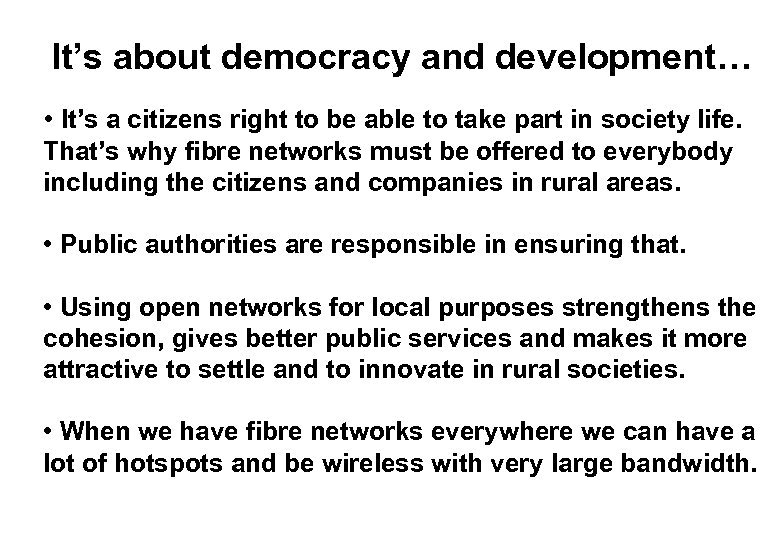 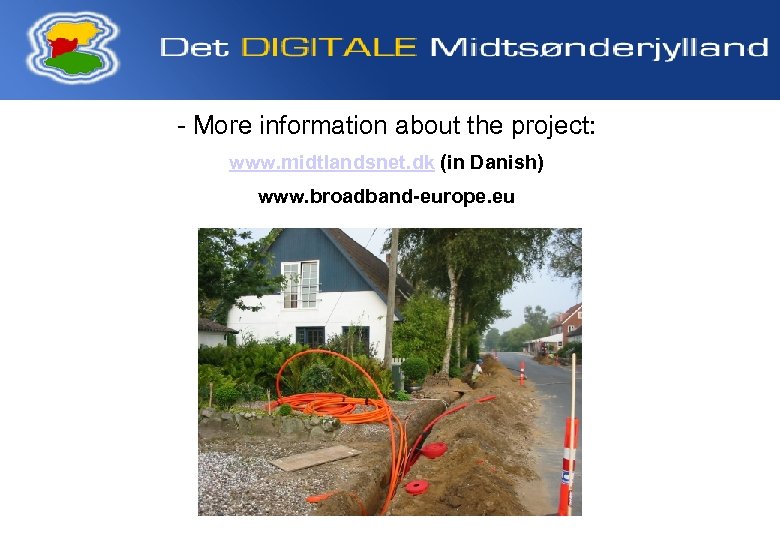 Make a vision… Then step by step search for solutions That’s how our project became a success - We have had Fibre-To-The-Home (FTTH) with 100 Mbit/s offered everywhere in a rural area of 1008 km 2 before end of 2007. - In the next project every part of Vejen Municipality will be covered with fibre networks to everybody before end of 2012.

2002: Analyses - two conclusions: 1. Optic fibres - will be the only solution capable of offering triple-play services to everybody - and everywhere in the area. 2. Make a master plan for a complete fibre network in the area in order to: • coordinate digging • building the network step by step • reducing total costs - Tools are developed at the University of Aalborg, DK.

4 municipalities made the first ring of fibre cables in 2004. One more ring was made in 2006 for the new Vejen Municipality. Connections from Vojens to city hall in the new Haderslev Municipality and to national backbone networks. Midtsønderjylland - a rural area in Denmark

Fibre to everybody - how ? • According to Danish law municipalities are not allowed to make fibre connections to companies and private households. • A public-private partnership was made including the municipalities, Syd Energi and TRE-FOR (two local distributors of electricity) and work is now carried out and fully financed by the private partners. • Syd Energi and TRE-FOR are cooperative companies owned by their customers. That makes the big difference !

Status 2008: • Energy Companies have decided to offer fibre connections to everybody in a large part of Denmark. (88000 connected + 50000 contracts, August 2008) • Municipalities and regions have tried to speed up that process in many places. • Danish Government is not ensuring fibre networks but only wireless connections or x. DSL to rural areas before end of 2010.

Some guidelines: • One fibre network in the area is enough if it’s an open network for different content providers in competition. • One network for everybody at the same time reduces total costs per termination. A master plan is needed for that. • Coordination of different digging projects according to the master plan creates synergy and minimizes total costs. • Do not spend too much money on temporary solutions.

Spin-off benefits from the project: • Establishment of the Innovation House (small business incubator) in 2004. Until now more than 40 new companies have been established. • A virtual innovation house: www. mybusiness. dk • A number of IT Houses have been set up to provide much-needed ICT training for local citizens. • Syd Energi and TRE-FOR now use the fibre networks to control and to optimize the supply of electricity in the area.

It’s about democracy and development… • It’s a citizens right to be able to take part in society life. That’s why fibre networks must be offered to everybody including the citizens and companies in rural areas. • Public authorities are responsible in ensuring that. • Using open networks for local purposes strengthens the cohesion, gives better public services and makes it more attractive to settle and to innovate in rural societies. • When we have fibre networks everywhere we can have a lot of hotspots and be wireless with very large bandwidth.