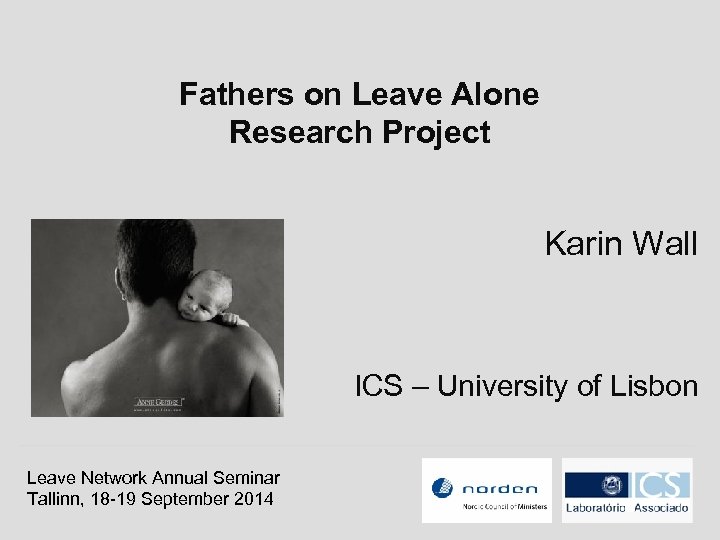 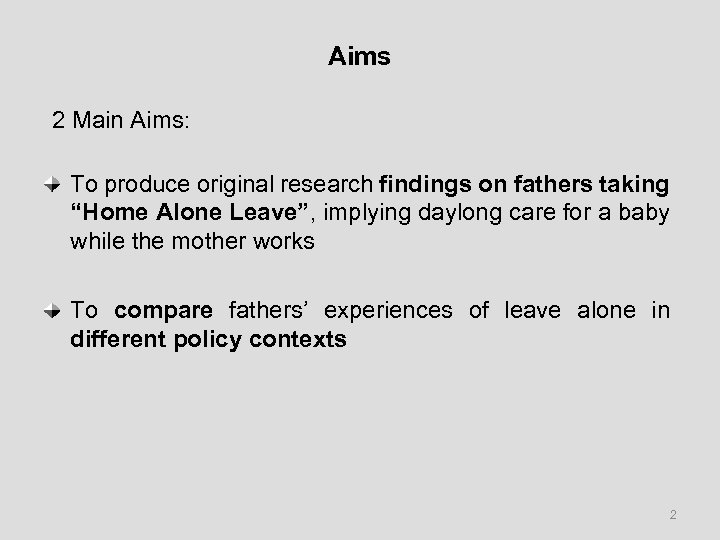 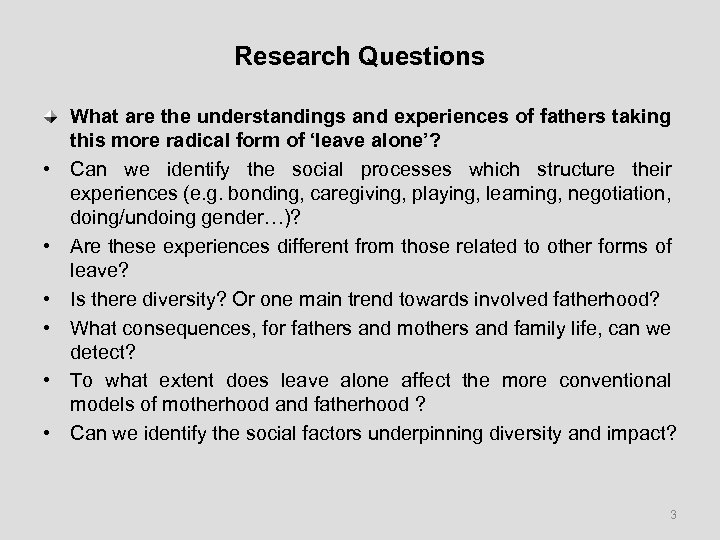 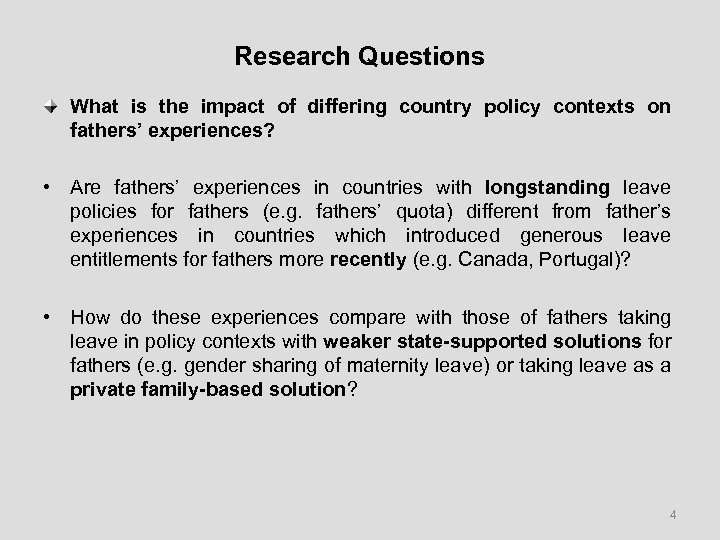 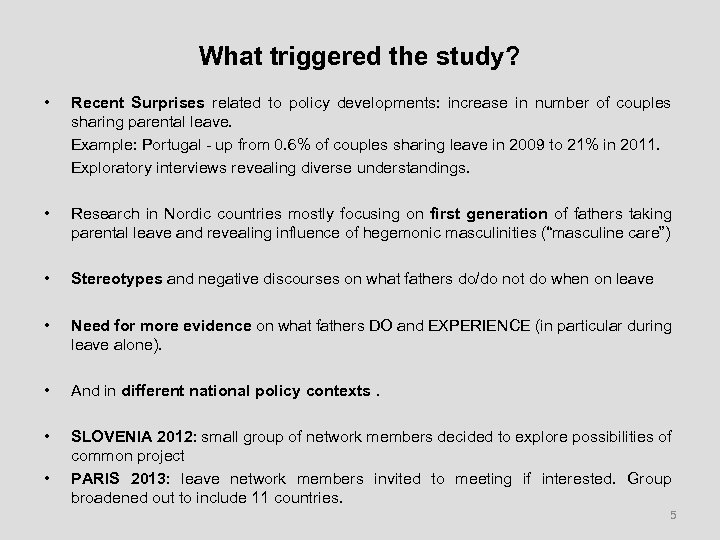 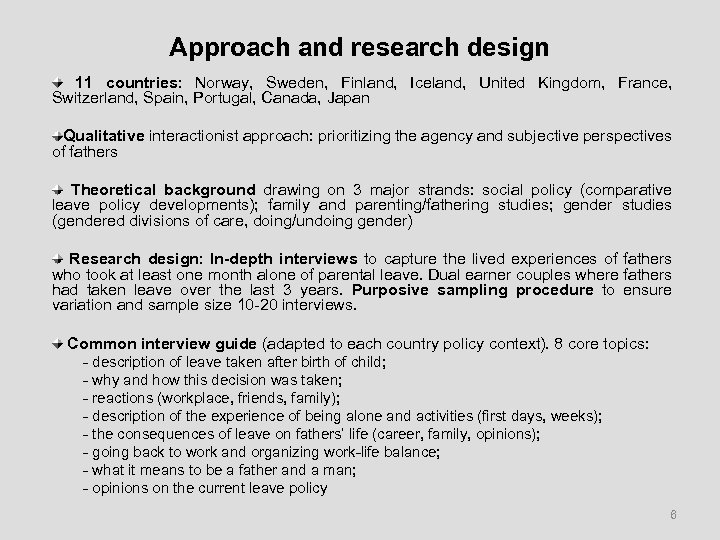 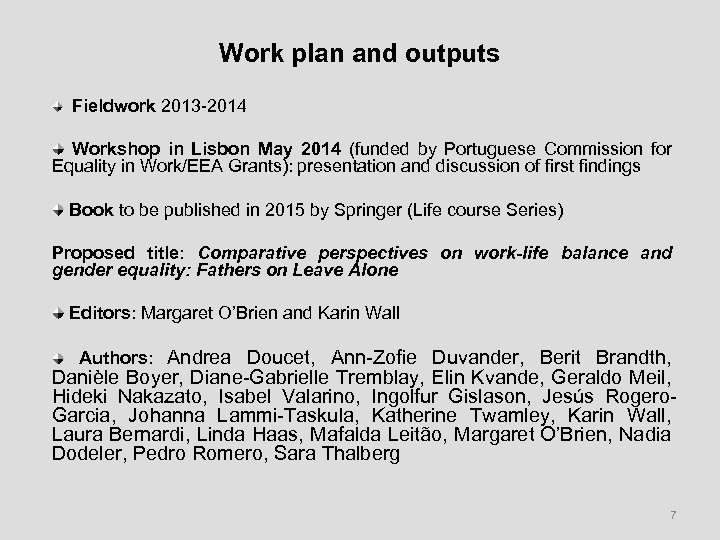 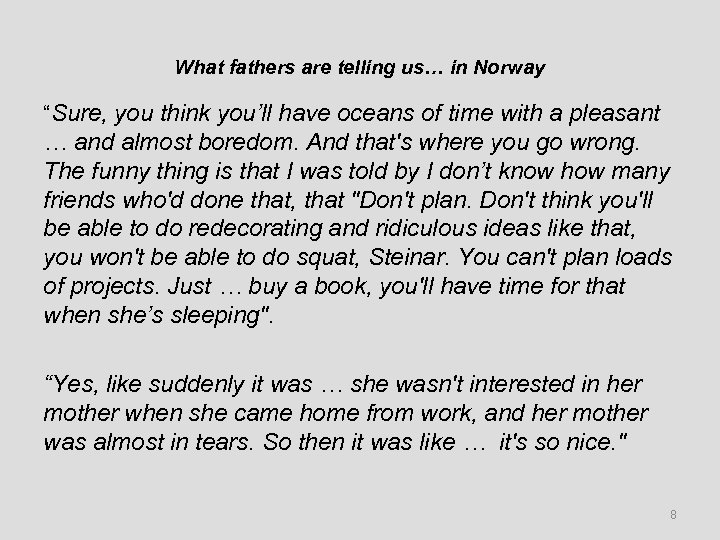 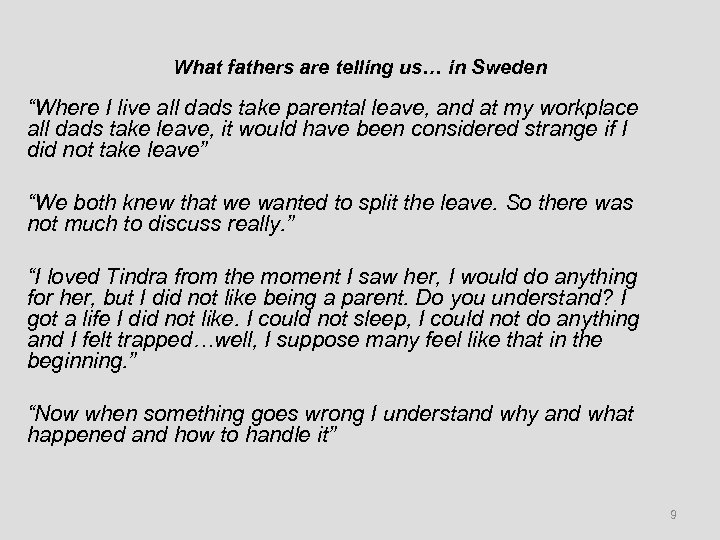 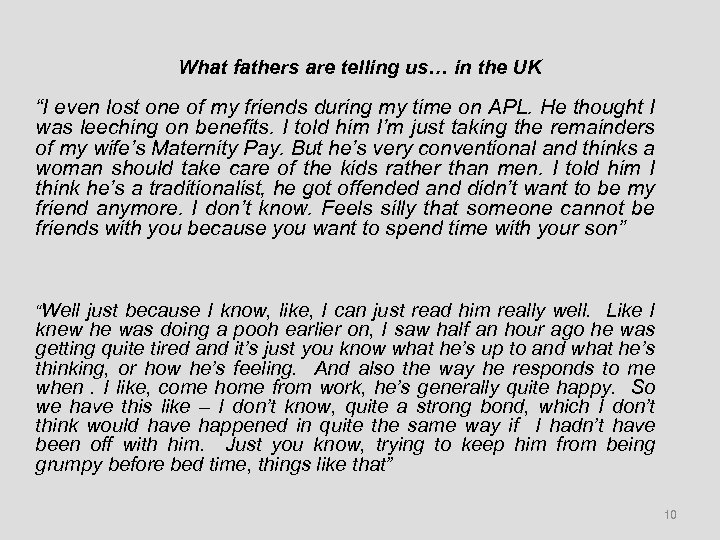 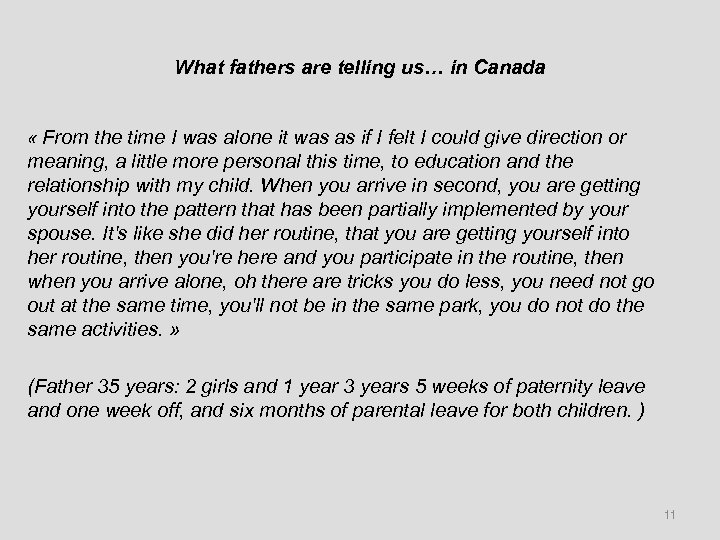 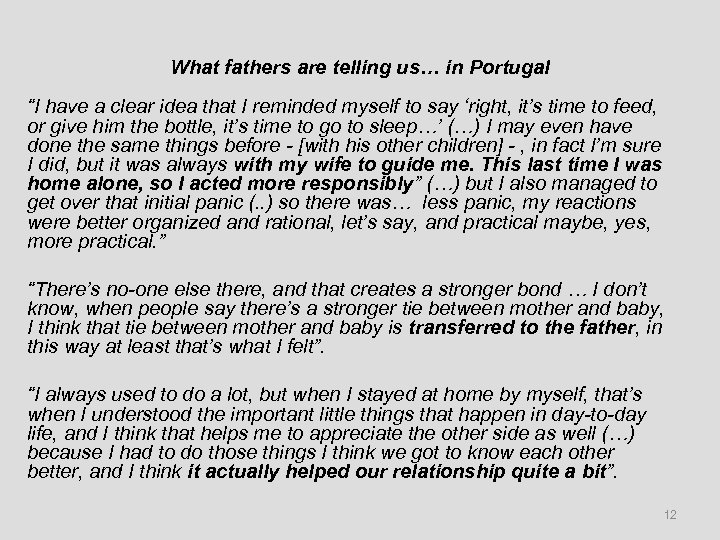 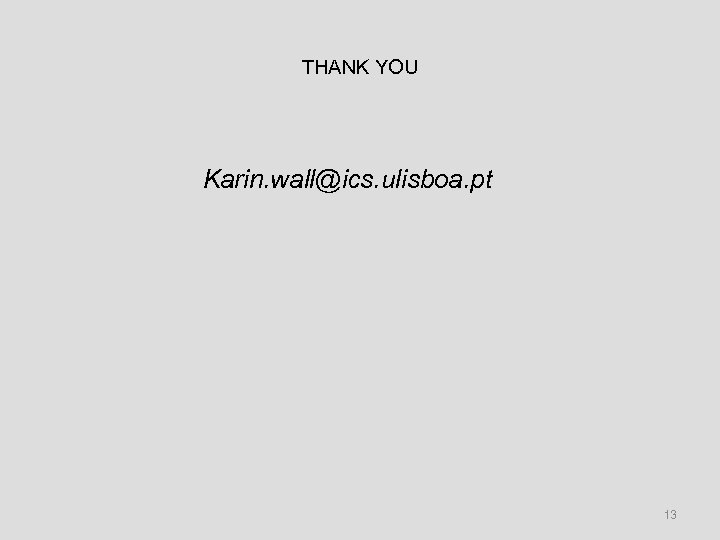 Research Questions • • • What are the understandings and experiences of fathers taking this more radical form of ‘leave alone’? Can we identify the social processes which structure their experiences (e. g. bonding, caregiving, playing, learning, negotiation, doing/undoing gender…)? Are these experiences different from those related to other forms of leave? Is there diversity? Or one main trend towards involved fatherhood? What consequences, for fathers and mothers and family life, can we detect? To what extent does leave alone affect the more conventional models of motherhood and fatherhood ? Can we identify the social factors underpinning diversity and impact? 3

What triggered the study? • Recent Surprises related to policy developments: increase in number of couples sharing parental leave. Example: Portugal - up from 0. 6% of couples sharing leave in 2009 to 21% in 2011. Exploratory interviews revealing diverse understandings. • Research in Nordic countries mostly focusing on first generation of fathers taking parental leave and revealing influence of hegemonic masculinities (“masculine care”) • Stereotypes and negative discourses on what fathers do/do not do when on leave • Need for more evidence on what fathers DO and EXPERIENCE (in particular during leave alone). • And in different national policy contexts. • SLOVENIA 2012: small group of network members decided to explore possibilities of common project PARIS 2013: leave network members invited to meeting if interested. Group broadened out to include 11 countries. • 5

What fathers are telling us… in Norway “Sure, you think you’ll have oceans of time with a pleasant … and almost boredom. And that's where you go wrong. The funny thing is that I was told by I don’t know how many friends who'd done that, that "Don't plan. Don't think you'll be able to do redecorating and ridiculous ideas like that, you won't be able to do squat, Steinar. You can't plan loads of projects. Just … buy a book, you'll have time for that when she’s sleeping". “Yes, like suddenly it was … she wasn't interested in her mother when she came home from work, and her mother was almost in tears. So then it was like … it's so nice. " 8

What fathers are telling us… in Sweden “Where I live all dads take parental leave, and at my workplace all dads take leave, it would have been considered strange if I did not take leave” “We both knew that we wanted to split the leave. So there was not much to discuss really. ” “I loved Tindra from the moment I saw her, I would do anything for her, but I did not like being a parent. Do you understand? I got a life I did not like. I could not sleep, I could not do anything and I felt trapped…well, I suppose many feel like that in the beginning. ” “Now when something goes wrong I understand why and what happened and how to handle it” 9

What fathers are telling us… in the UK “I even lost one of my friends during my time on APL. He thought I was leeching on benefits. I told him I’m just taking the remainders of my wife’s Maternity Pay. But he’s very conventional and thinks a woman should take care of the kids rather than men. I told him I think he’s a traditionalist, he got offended and didn’t want to be my friend anymore. I don’t know. Feels silly that someone cannot be friends with you because you want to spend time with your son” “Well just because I know, like, I can just read him really well. Like I knew he was doing a pooh earlier on, I saw half an hour ago he was getting quite tired and it’s just you know what he’s up to and what he’s thinking, or how he’s feeling. And also the way he responds to me when. I like, come home from work, he’s generally quite happy. So we have this like – I don’t know, quite a strong bond, which I don’t think would have happened in quite the same way if I hadn’t have been off with him. Just you know, trying to keep him from being grumpy before bed time, things like that” 10

What fathers are telling us… in Canada « From the time I was alone it was as if I felt I could give direction or meaning, a little more personal this time, to education and the relationship with my child. When you arrive in second, you are getting yourself into the pattern that has been partially implemented by your spouse. It's like she did her routine, that you are getting yourself into her routine, then you're here and you participate in the routine, then when you arrive alone, oh there are tricks you do less, you need not go out at the same time, you'll not be in the same park, you do not do the same activities. » (Father 35 years: 2 girls and 1 year 3 years 5 weeks of paternity leave and one week off, and six months of parental leave for both children. ) 11

What fathers are telling us… in Portugal “I have a clear idea that I reminded myself to say ‘right, it’s time to feed, or give him the bottle, it’s time to go to sleep…’ (…) I may even have done the same things before - [with his other children] - , in fact I’m sure I did, but it was always with my wife to guide me. This last time I was home alone, so I acted more responsibly” (…) but I also managed to get over that initial panic (. . ) so there was… less panic, my reactions were better organized and rational, let’s say, and practical maybe, yes, more practical. ” “There’s no-one else there, and that creates a stronger bond … I don’t know, when people say there’s a stronger tie between mother and baby, I think that tie between mother and baby is transferred to the father, in this way at least that’s what I felt”. “I always used to do a lot, but when I stayed at home by myself, that’s when I understood the important little things that happen in day-to-day life, and I think that helps me to appreciate the other side as well (…) because I had to do those things I think we got to know each other better, and I think it actually helped our relationship quite a bit”. 12