FASTING Ramadan appears to be in the 9 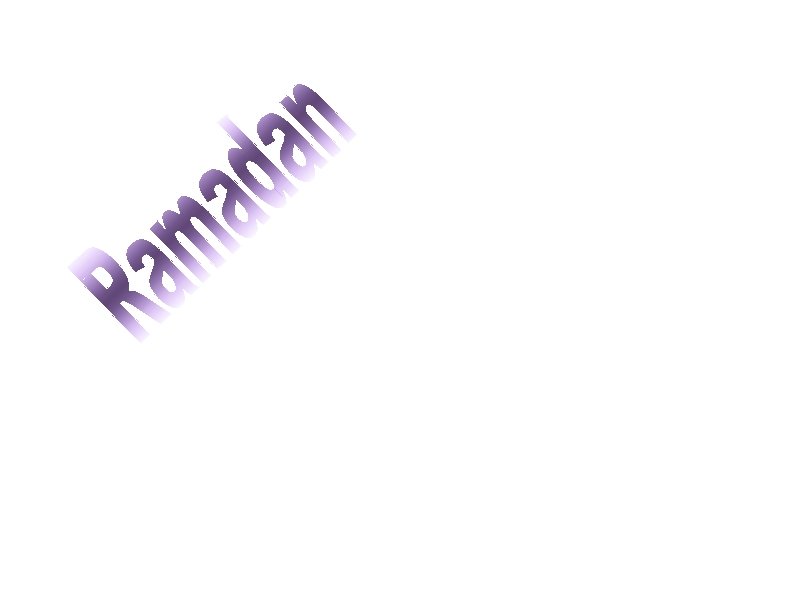 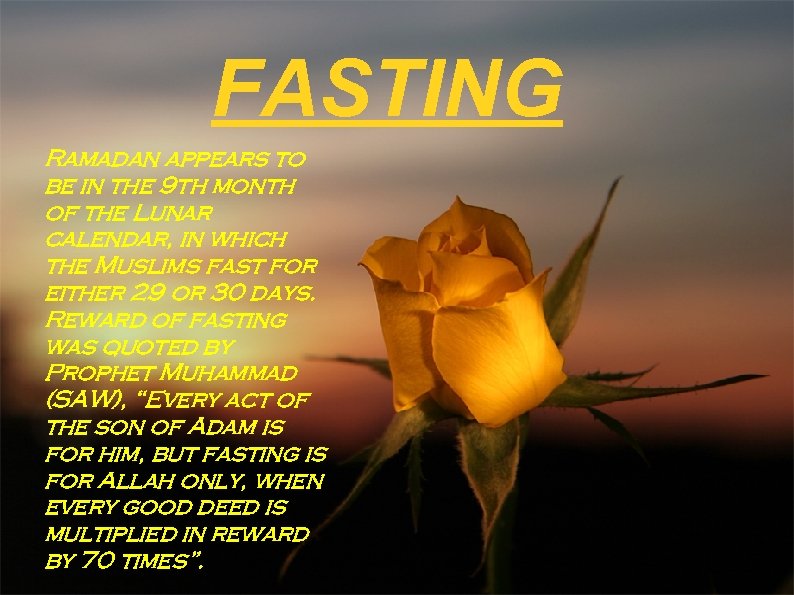 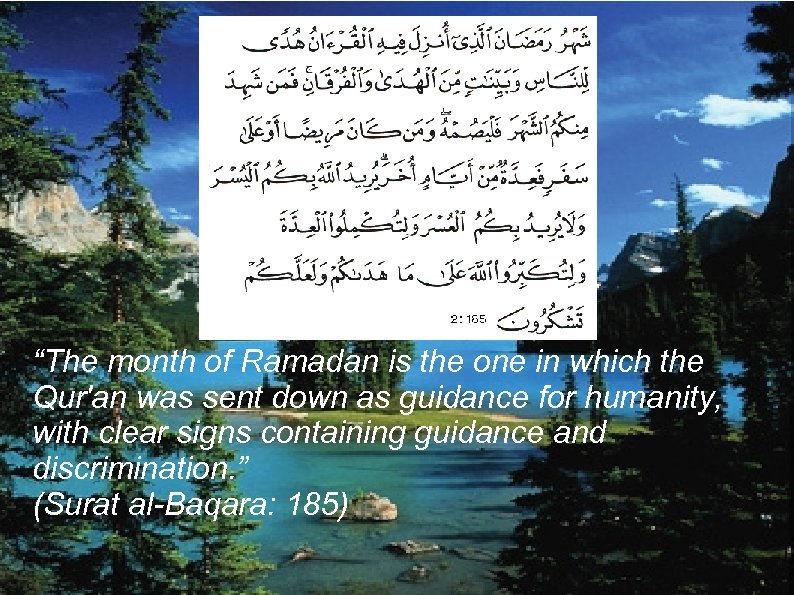 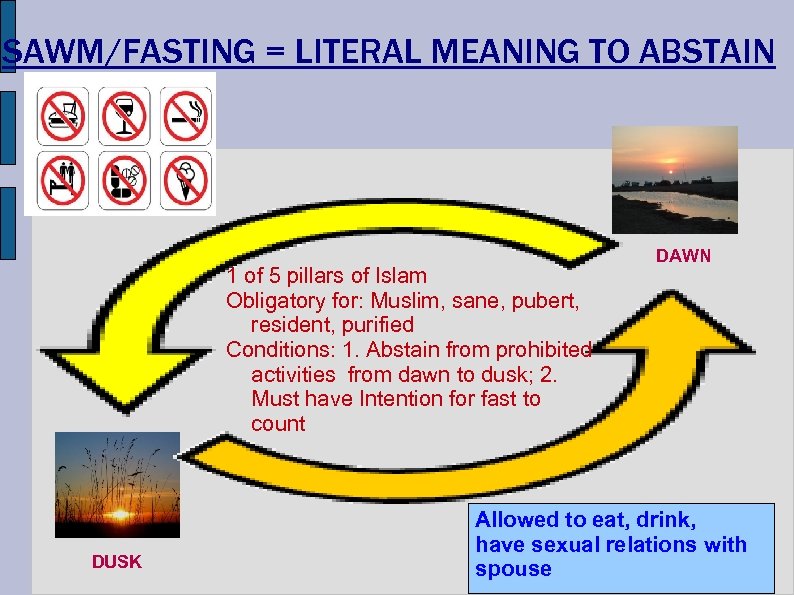 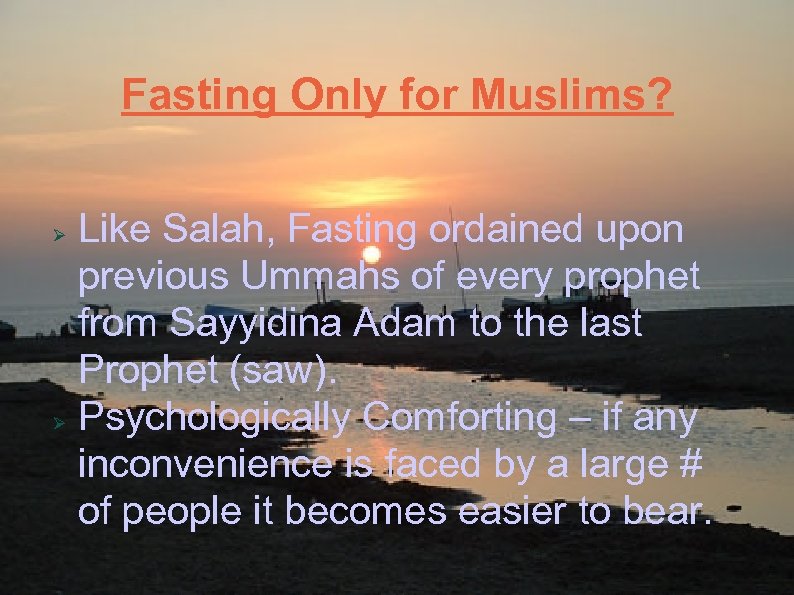 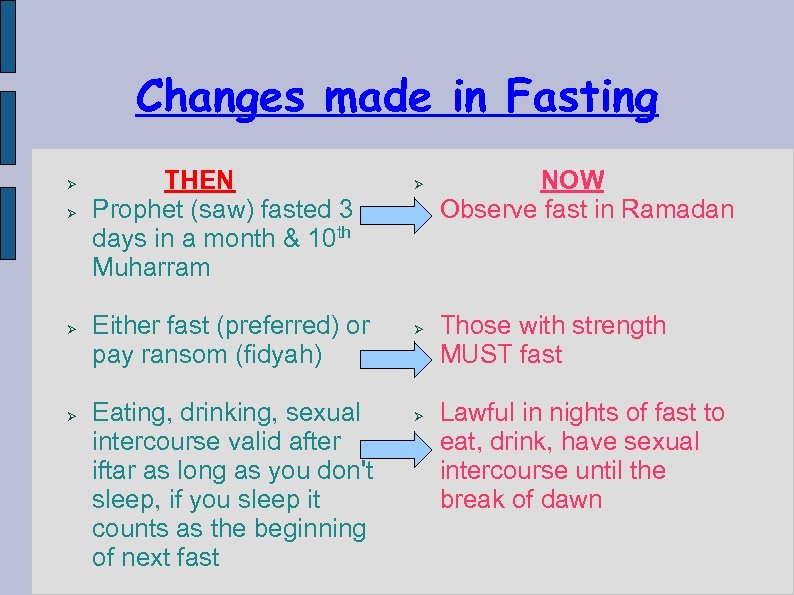 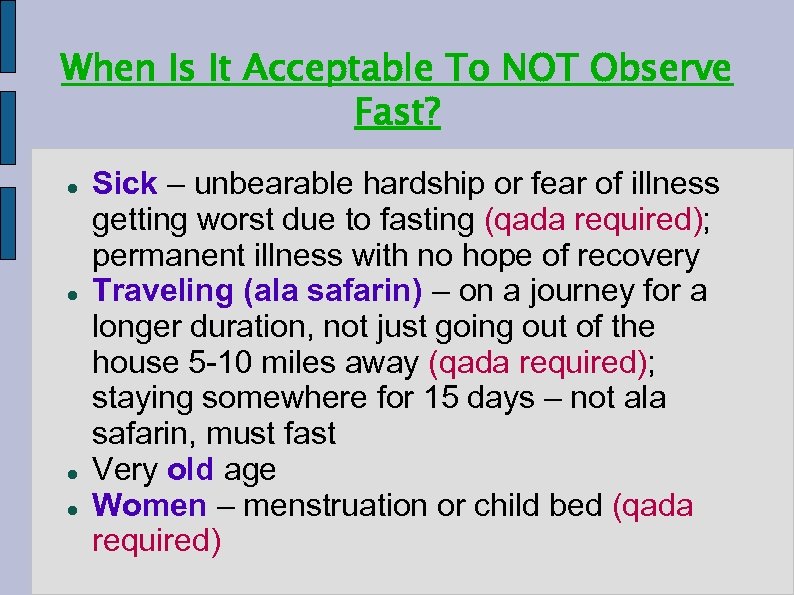 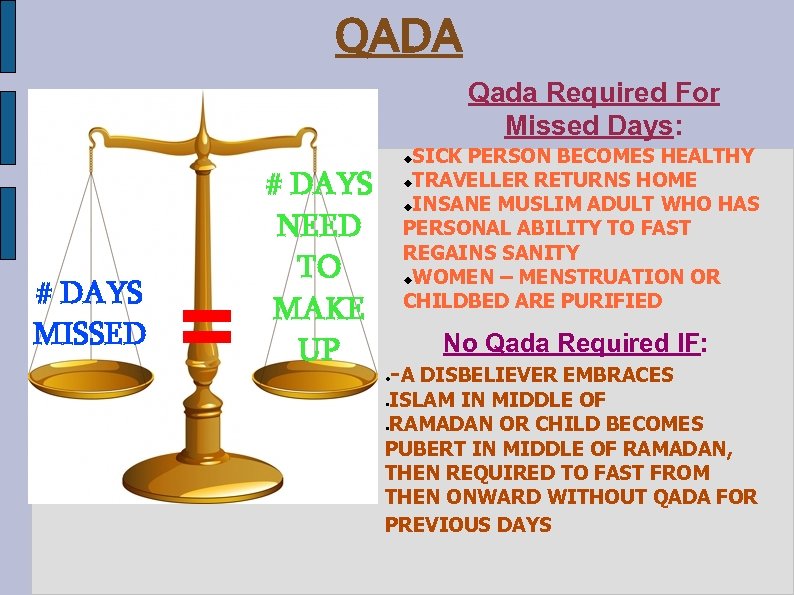 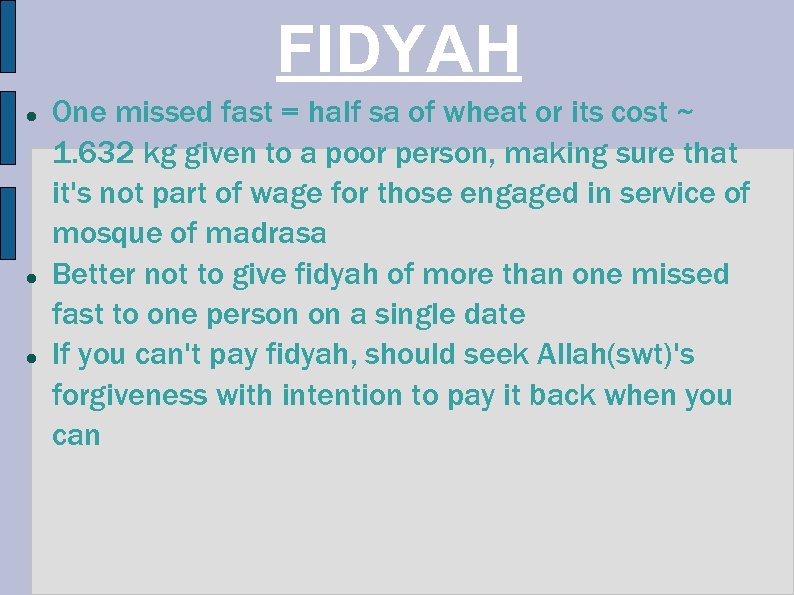 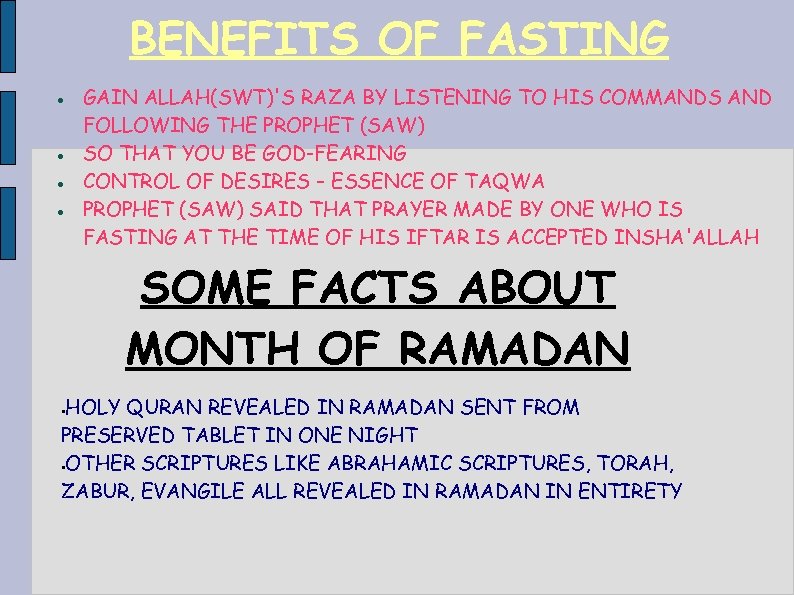 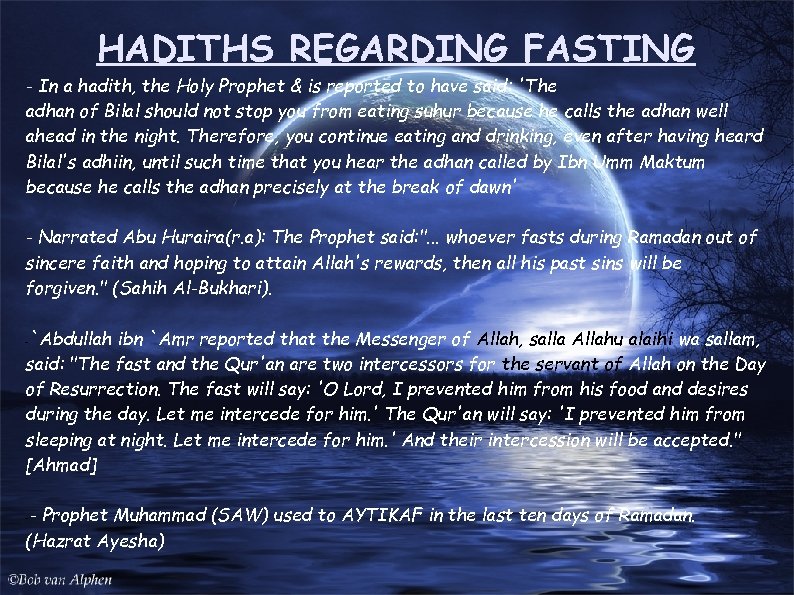 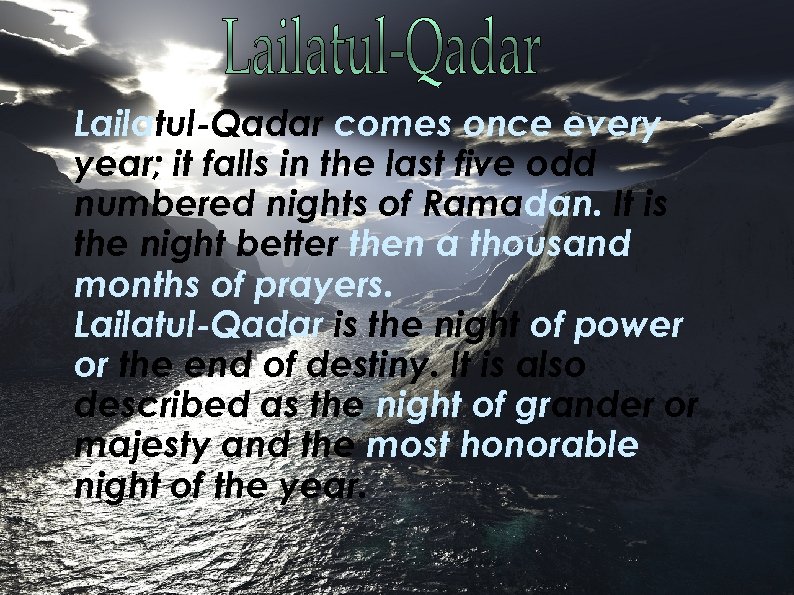 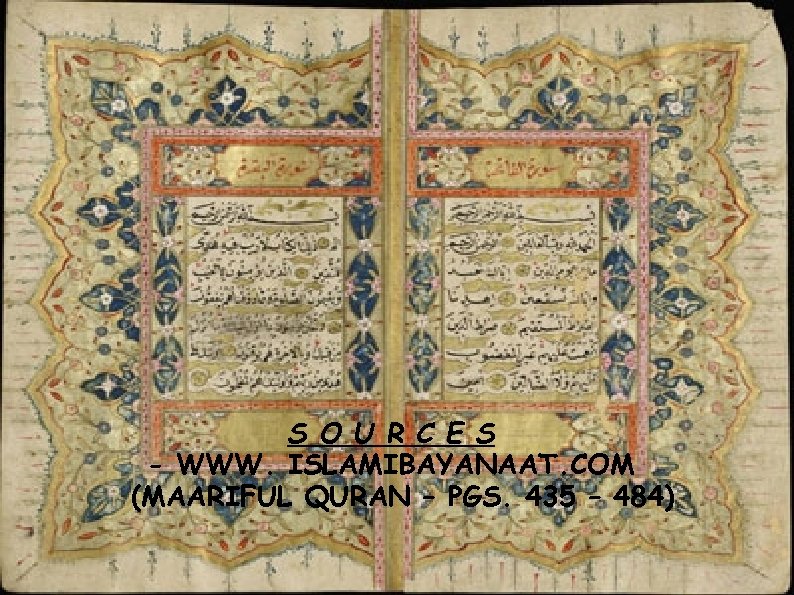 Скачать презентацию FASTING Ramadan appears to be in the 9

FASTING Ramadan appears to be in the 9 th month of the Lunar calendar, in which the Muslims fast for either 29 or 30 days. Reward of fasting was quoted by Prophet Muhammad (SAW), “Every act of the son of Adam is for him, but fasting is for Allah only, when every good deed is multiplied in reward by 70 times”.

“The month of Ramadan is the one in which the Qur'an was sent down as guidance for humanity, with clear signs containing guidance and discrimination. ” (Surat al-Baqara: 185)

SAWM/FASTING = LITERAL MEANING TO ABSTAIN 1 of 5 pillars of Islam Obligatory for: Muslim, sane, pubert, resident, purified Conditions: 1. Abstain from prohibited activities from dawn to dusk; 2. Must have Intention for fast to count DUSK DAWN Allowed to eat, drink, have sexual relations with spouse

Fasting Only for Muslims? Like Salah, Fasting ordained upon previous Ummahs of every prophet from Sayyidina Adam to the last Prophet (saw). Psychologically Comforting – if any inconvenience is faced by a large # of people it becomes easier to bear.

Changes made in Fasting THEN Prophet (saw) fasted 3 days in a month & 10 th Muharram Either fast (preferred) or pay ransom (fidyah) Eating, drinking, sexual intercourse valid after iftar as long as you don't sleep, if you sleep it counts as the beginning of next fast NOW Observe fast in Ramadan Those with strength MUST fast Lawful in nights of fast to eat, drink, have sexual intercourse until the break of dawn

When Is It Acceptable To NOT Observe Fast? Sick – unbearable hardship or fear of illness getting worst due to fasting (qada required); permanent illness with no hope of recovery Traveling (ala safarin) – on a journey for a longer duration, not just going out of the house 5 -10 miles away (qada required); staying somewhere for 15 days – not ala safarin, must fast Very old age Women – menstruation or child bed (qada required)

QADA Qada Required For Missed Days: # DAYS MISSED = SICK PERSON BECOMES HEALTHY TRAVELLER RETURNS HOME INSANE MUSLIM ADULT WHO HAS PERSONAL ABILITY TO FAST REGAINS SANITY WOMEN – MENSTRUATION OR CHILDBED ARE PURIFIED # DAYS NEED TO MAKE UP No Qada Required IF: -A DISBELIEVER EMBRACES ISLAM IN MIDDLE OF RAMADAN OR CHILD BECOMES PUBERT IN MIDDLE OF RAMADAN, THEN REQUIRED TO FAST FROM THEN ONWARD WITHOUT QADA FOR PREVIOUS DAYS

FIDYAH One missed fast = half sa of wheat or its cost ~ 1. 632 kg given to a poor person, making sure that it's not part of wage for those engaged in service of mosque of madrasa Better not to give fidyah of more than one missed fast to one person on a single date If you can't pay fidyah, should seek Allah(swt)'s forgiveness with intention to pay it back when you can

BENEFITS OF FASTING GAIN ALLAH(SWT)'S RAZA BY LISTENING TO HIS COMMANDS AND FOLLOWING THE PROPHET (SAW) SO THAT YOU BE GOD-FEARING CONTROL OF DESIRES – ESSENCE OF TAQWA PROPHET (SAW) SAID THAT PRAYER MADE BY ONE WHO IS FASTING AT THE TIME OF HIS IFTAR IS ACCEPTED INSHA'ALLAH SOME FACTS ABOUT MONTH OF RAMADAN HOLY QURAN REVEALED IN RAMADAN SENT FROM PRESERVED TABLET IN ONE NIGHT OTHER SCRIPTURES LIKE ABRAHAMIC SCRIPTURES, TORAH, ZABUR, EVANGILE ALL REVEALED IN RAMADAN IN ENTIRETY

HADITHS REGARDING FASTING - In a hadith, the Holy Prophet & is reported to have said: 'The adhan of Bilal should not stop you from eating suhur because he calls the adhan well ahead in the night. Therefore, you continue eating and drinking, even after having heard Bilal's adhiin, until such time that you hear the adhan called by Ibn Umm Maktum because he calls the adhan precisely at the break of dawn' - Narrated Abu Huraira(r. a): The Prophet said: ". . . whoever fasts during Ramadan out of sincere faith and hoping to attain Allah's rewards, then all his past sins will be forgiven. " (Sahih Al-Bukhari). `Abdullah ibn `Amr reported that the Messenger of Allah, salla Allahu alaihi wa sallam, said: "The fast and the Qur'an are two intercessors for the servant of Allah on the Day of Resurrection. The fast will say: 'O Lord, I prevented him from his food and desires during the day. Let me intercede for him. ' The Qur'an will say: 'I prevented him from sleeping at night. Let me intercede for him. ' And their intercession will be accepted. " [Ahmad] - - Prophet Muhammad (SAW) used to AYTIKAF in the last ten days of Ramadan. (Hazrat Ayesha) -

Childhood Diseases Information retrieved on 9/20/2006 from: