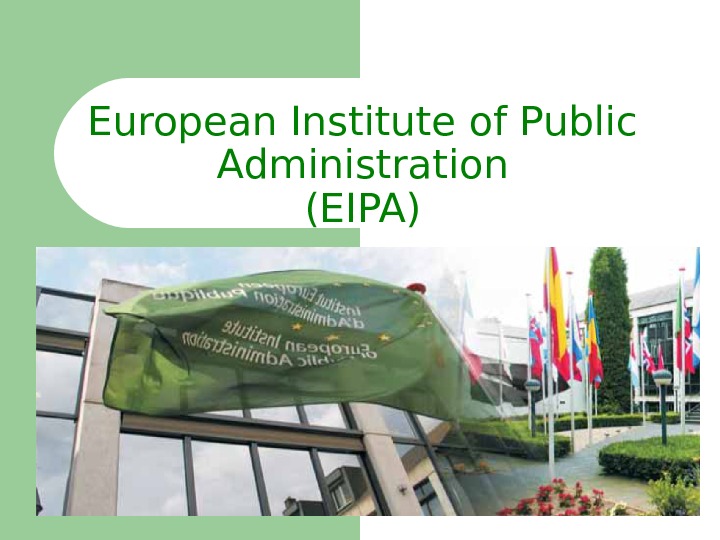 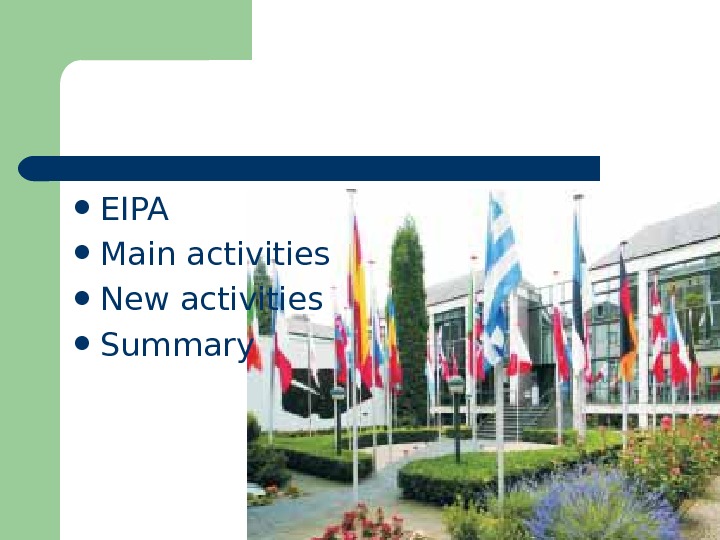 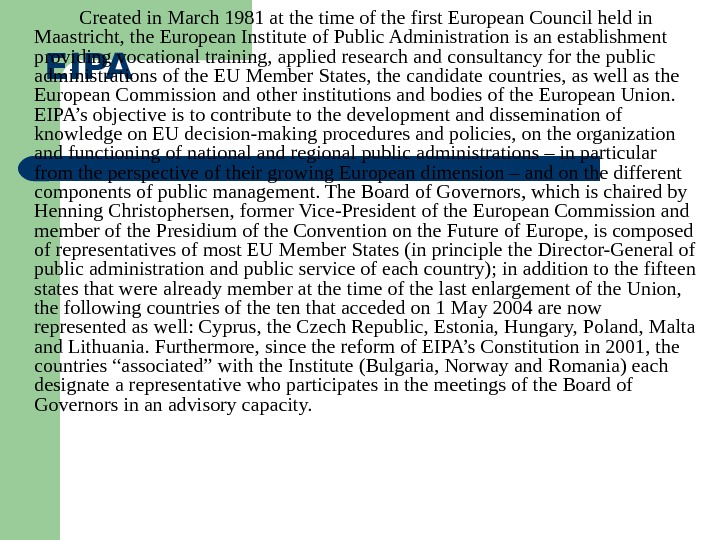 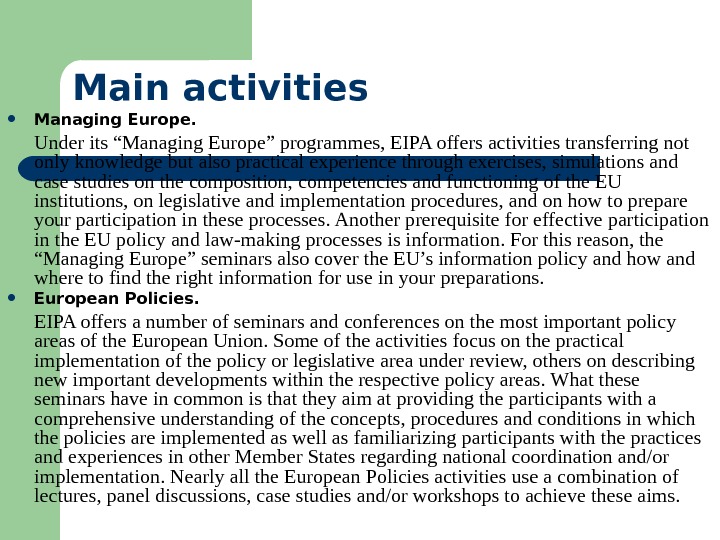 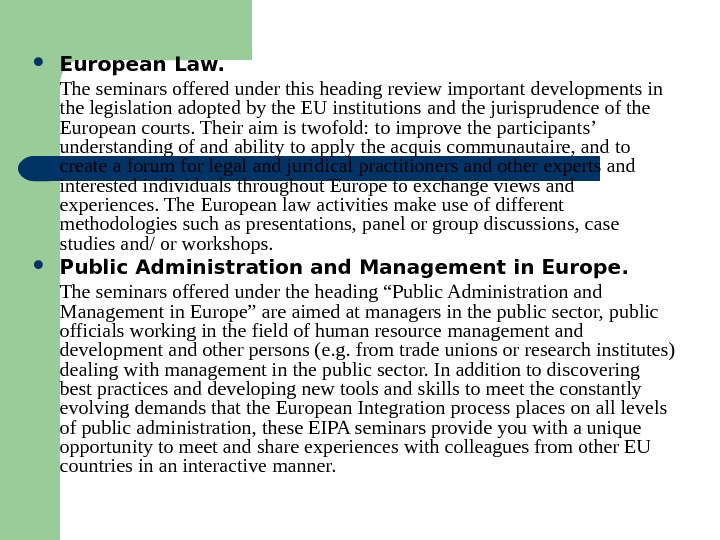 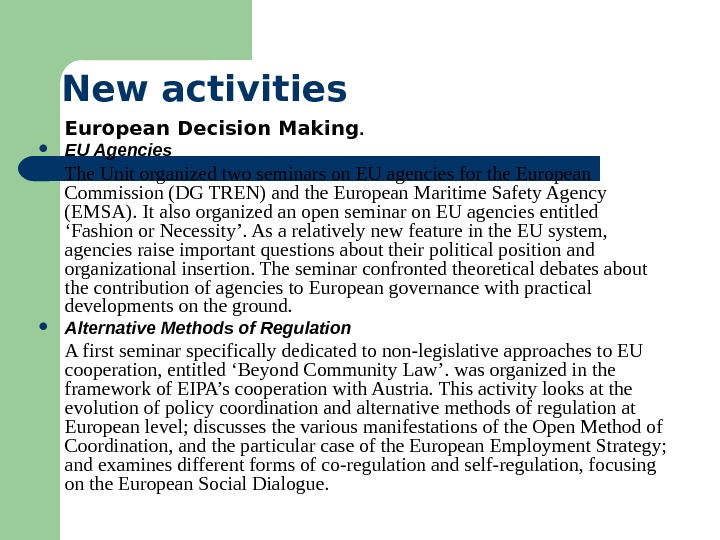 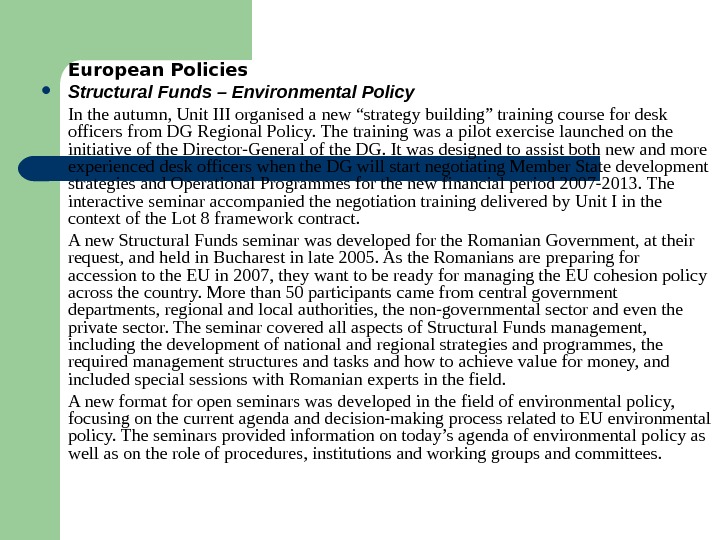 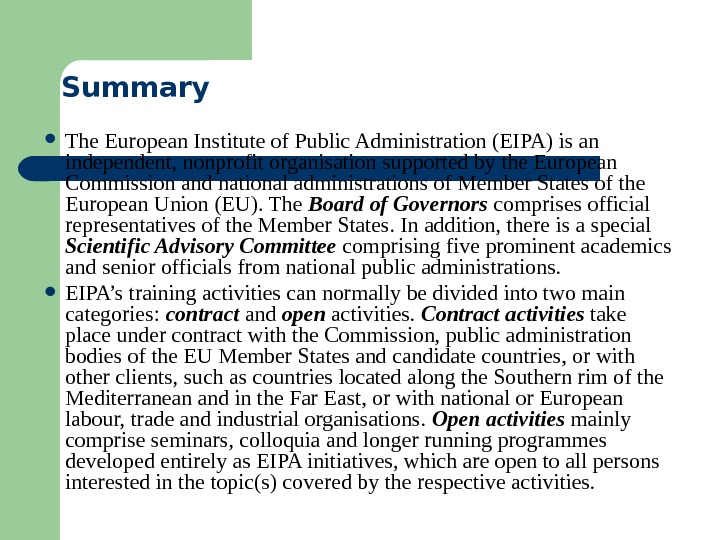 EIPA Created in March 1981 at the time of the first European Council held in Maastricht, the European Institute of Public Administration is an establishment providing vocational training, applied research and consultancy for the public administrations of the EU Member States, the candidate countries, as well as the European Commission and other institutions and bodies of the European Union. EIPA’s objective is to contribute to the development and dissemination of knowledge on EU decision-making procedures and policies, on the organization and functioning of national and regional public administrations – in particular from the perspective of their growing European dimension – and on the different components of public management. The Board of Governors, which is chaired by Henning Christophersen, former Vice-President of the European Commission and member of the Presidium of the Convention on the Future of Europe, is composed of representatives of most EU Member States (in principle the Director-General of public administration and public service of each country); in addition to the fifteen states that were already member at the time of the last enlargement of the Union, the following countries of the ten that acceded on 1 May 2004 are now represented as well: Cyprus, the Czech Republic, Estonia, Hungary, Poland, Malta and Lithuania. Furthermore, since the reform of EIPA’s Constitution in 2001, the countries “associated” with the Institute (Bulgaria, Norway and Romania) each designate a representative who participates in the meetings of the Board of Governors in an advisory capacity.

Main activities Managing Europe. Under its “Managing Europe” programmes, EIPA offers activities transferring not only knowledge but also practical experience through exercises, simulations and case studies on the composition, competencies and functioning of the EU institutions, on legislative and implementation procedures, and on how to prepare your participation in these processes. Another prerequisite for effective participation in the EU policy and law-making processes is information. For this reason, the “Managing Europe” seminars also cover the EU’s information policy and how and where to find the right information for use in your preparations. European Policies. EIPA offers a number of seminars and conferences on the most important policy areas of the European Union. Some of the activities focus on the practical implementation of the policy or legislative area under review, others on describing new important developments within the respective policy areas. What these seminars have in common is that they aim at providing the participants with a comprehensive understanding of the concepts, procedures and conditions in which the policies are implemented as well as familiarizing participants with the practices and experiences in other Member States regarding national coordination and/or implementation. Nearly all the European Policies activities use a combination of lectures, panel discussions, case studies and/or workshops to achieve these aims.

European Law. The seminars offered under this heading review important developments in the legislation adopted by the EU institutions and the jurisprudence of the European courts. Their aim is twofold: to improve the participants’ understanding of and ability to apply the acquis communautaire, and to create a forum for legal and juridical practitioners and other experts and interested individuals throughout Europe to exchange views and experiences. The European law activities make use of different methodologies such as presentations, panel or group discussions, case studies and/ or workshops. Public Administration and Management in Europe. The seminars offered under the heading “Public Administration and Management in Europe” are aimed at managers in the public sector, public officials working in the field of human resource management and development and other persons (e. g. from trade unions or research institutes) dealing with management in the public sector. In addition to discovering best practices and developing new tools and skills to meet the constantly evolving demands that the European Integration process places on all levels of public administration, these EIPA seminars provide you with a unique opportunity to meet and share experiences with colleagues from other EU countries in an interactive manner.

New activities European Decision Making. EU Agencies The Unit organized two seminars on EU agencies for the European Commission (DG TREN) and the European Maritime Safety Agency (EMSA). It also organized an open seminar on EU agencies entitled ‘Fashion or Necessity’. As a relatively new feature in the EU system, agencies raise important questions about their political position and organizational insertion. The seminar confronted theoretical debates about the contribution of agencies to European governance with practical developments on the ground. Alternative Methods of Regulation A first seminar specifically dedicated to non-legislative approaches to EU cooperation, entitled ‘Beyond Community Law’. was organized in the framework of EIPA’s cooperation with Austria. This activity looks at the evolution of policy coordination and alternative methods of regulation at European level; discusses the various manifestations of the Open Method of Coordination, and the particular case of the European Employment Strategy; and examines different forms of co-regulation and self-regulation, focusing on the European Social Dialogue.

European Policies Structural Funds – Environmental Policy In the autumn, Unit III organised a new “strategy building” training course for desk officers from DG Regional Policy. The training was a pilot exercise launched on the initiative of the Director-General of the DG. It was designed to assist both new and more experienced desk officers when the DG will start negotiating Member State development strategies and Operational Programmes for the new financial period 2007 -2013. The interactive seminar accompanied the negotiation training delivered by Unit I in the context of the Lot 8 framework contract. A new Structural Funds seminar was developed for the Romanian Government, at their request, and held in Bucharest in late 2005. As the Romanians are preparing for accession to the EU in 2007, they want to be ready for managing the EU cohesion policy across the country. More than 50 participants came from central government departments, regional and local authorities, the non-governmental sector and even the private sector. The seminar covered all aspects of Structural Funds management, including the development of national and regional strategies and programmes, the required management structures and tasks and how to achieve value for money, and included special sessions with Romanian experts in the field. A new format for open seminars was developed in the field of environmental policy, focusing on the current agenda and decision-making process related to EU environmental policy. The seminars provided information on today’s agenda of environmental policy as well as on the role of procedures, institutions and working groups and committees.

Public Private Partnerships (PPPs) In recent years, public private partnerships have become much more widely used in the EU, mainly because of the gap between the financing needed to implement major EU policies and the public funds available for this. Examples include the completion of the EU Internal Market, i. e. developing the TENs networks, enabling CEE states to comply with EU environmental legislation, etc. They introduced seminars on public private partnerships into the programme in 2005 to help public authorities understand when a PPP is the right solution and show them how to implement it effectively, especially as it often involves complex transactions with a high political profile. One of the seminars was intended for PPP practitioners – public officials responsible for implementing PPPs – using case studies from different sectors (including health, waste water, roads, housing and education) and Member States (e. g. Portugal, France, the UK, Hungary, Romania and Ireland) presented from public and private sector perspectives and with contributions from European institutions.

European Law Applied training activities on topics already covered by the ECJL’s activities, e. g. the infringement procedure, national courts’ preparation of references to the ECJ for preliminary rulings, law approximation and alternative dispute resolution (ADR). The development of these pilot activities started mainly within the framework of contracts with selected clients, but may later be offered as open activities; Training on administrative/managerial aspects of the work of courts. The development of training activities in these fields was launched with a view to implementing the first two open activities in the second half of 2006, namely “CAF for Courts” and “How to Deal with the Press”, intended for judges, prosecutors and lawyers; Train-the-trainer activities specifically focusing on EC/EU law and relating to substance (law) as well as training methodologies and communication aspects. Negotiations took place with donor countries on contracts for the provision of technical assistance in a number of Balkan countries in 2006 incorporating these aspects; Activities related to the implementation of EC law at the national level. To date, the ECJL’s activities have focused on the interpretation of EC/EU law. Targeted developmental work started in 2005 with a view to offering new activities in 2006 focusing on the practical application of EC/EU law as well as on national coordination of the implementation of EC law in the national legal system.

Summary The European Institute of Public Administration (EIPA) is an independent, nonprofit organisation supported by the European Commission and national administrations of Member States of the European Union (EU). The Board of Governors comprises official representatives of the Member States. In addition, there is a special Scientific Advisory Committee comprising five prominent academics and senior officials from national public administrations. EIPA’s training activities can normally be divided into two main categories: contract and open activities. Contract activities take place under contract with the Commission, public administration bodies of the EU Member States and candidate countries, or with other clients, such as countries located along the Southern rim of the Mediterranean and in the Far East, or with national or European labour, trade and industrial organisations. Open activities mainly comprise seminars, colloquia and longer running programmes developed entirely as EIPA initiatives, which are open to all persons interested in the topic(s) covered by the respective activities.