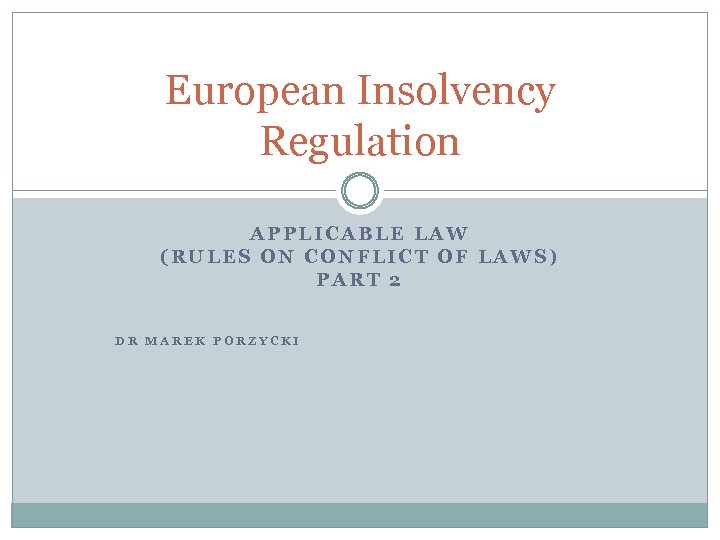 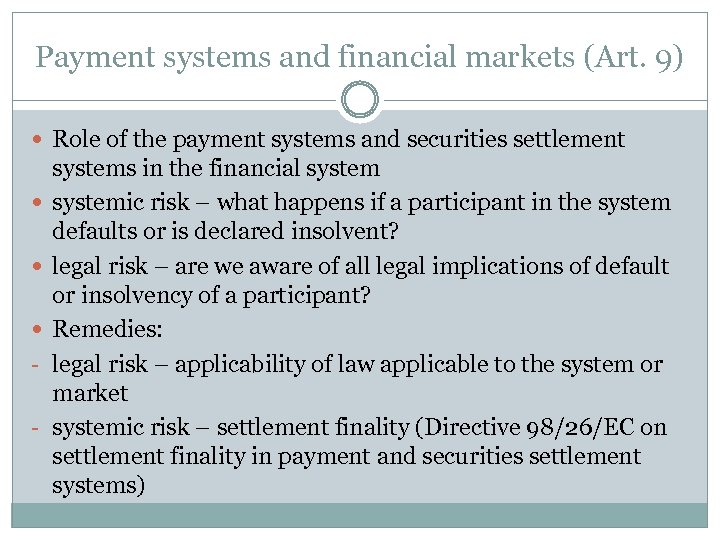 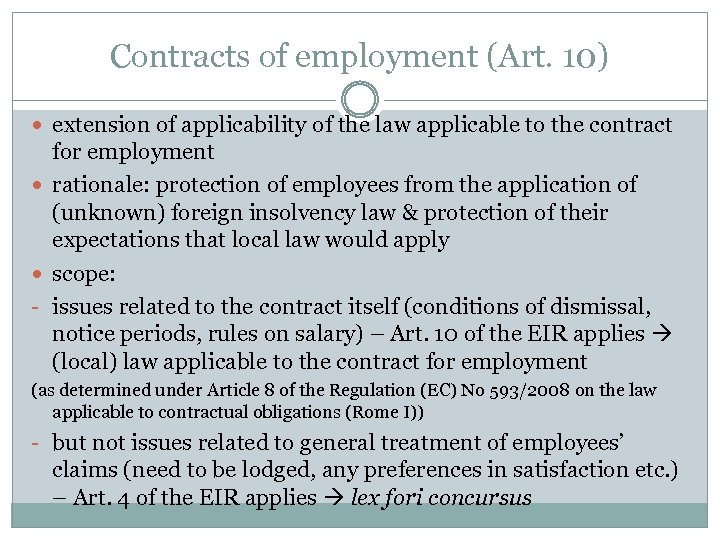 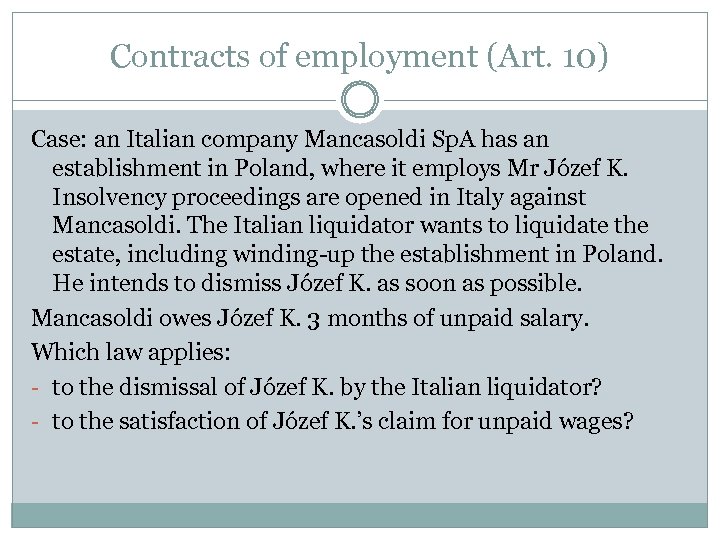 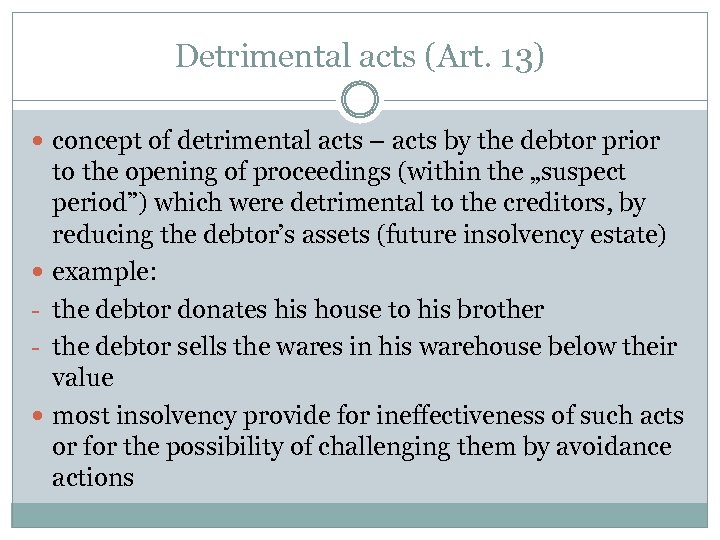 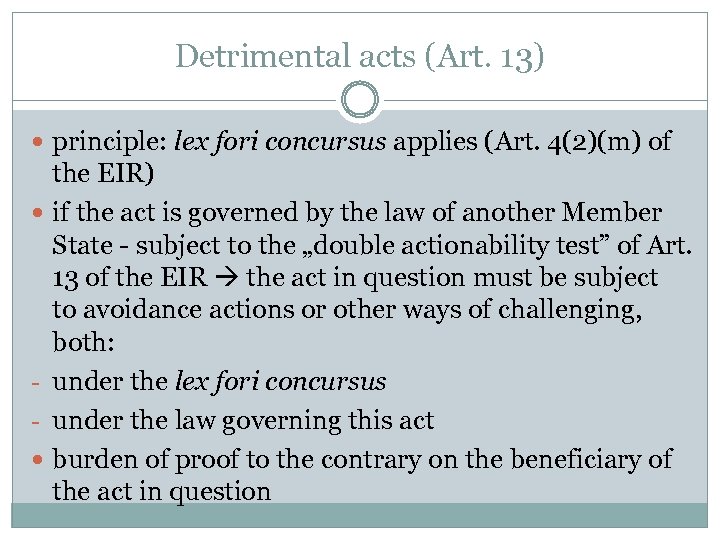 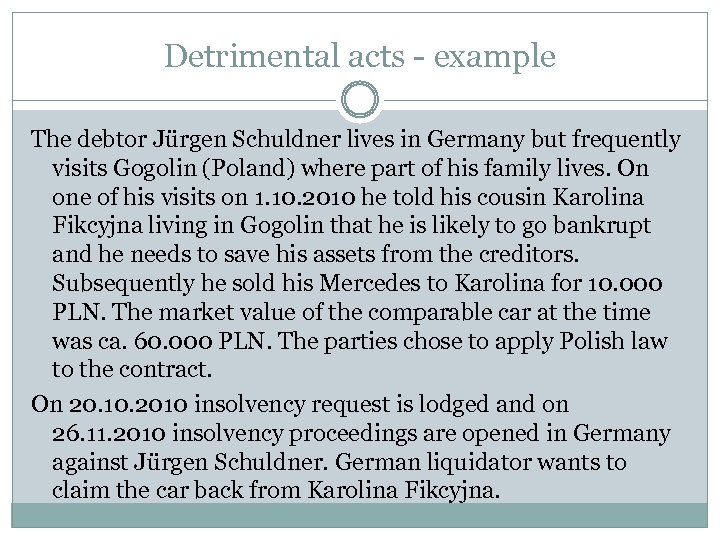 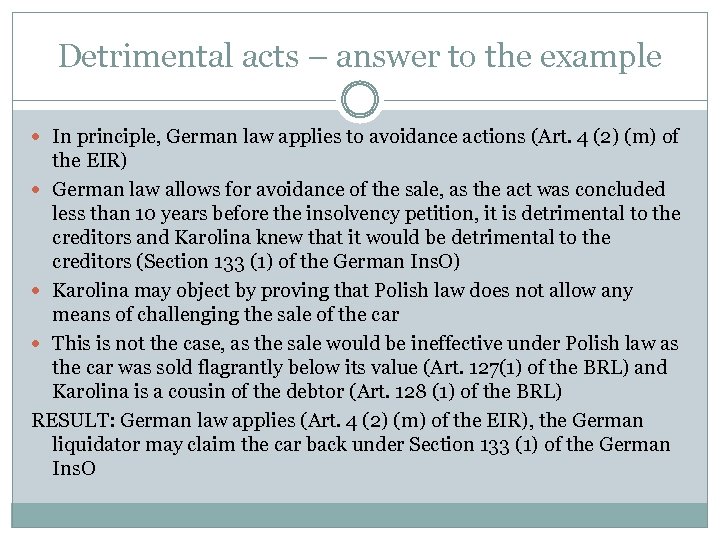 Payment systems and financial markets (Art. 9) Role of the payment systems and securities settlement - systems in the financial systemic risk – what happens if a participant in the system defaults or is declared insolvent? legal risk – are we aware of all legal implications of default or insolvency of a participant? Remedies: legal risk – applicability of law applicable to the system or market systemic risk – settlement finality (Directive 98/26/EC on settlement finality in payment and securities settlement systems)

Contracts of employment (Art. 10) extension of applicability of the law applicable to the contract for employment rationale: protection of employees from the application of (unknown) foreign insolvency law & protection of their expectations that local law would apply scope: - issues related to the contract itself (conditions of dismissal, notice periods, rules on salary) – Art. 10 of the EIR applies (local) law applicable to the contract for employment (as determined under Article 8 of the Regulation (EC) No 593/2008 on the law applicable to contractual obligations (Rome I)) - but not issues related to general treatment of employees’ claims (need to be lodged, any preferences in satisfaction etc. ) – Art. 4 of the EIR applies lex fori concursus

Contracts of employment (Art. 10) Case: an Italian company Mancasoldi Sp. A has an establishment in Poland, where it employs Mr Józef K. Insolvency proceedings are opened in Italy against Mancasoldi. The Italian liquidator wants to liquidate the estate, including winding-up the establishment in Poland. He intends to dismiss Józef K. as soon as possible. Mancasoldi owes Józef K. 3 months of unpaid salary. Which law applies: - to the dismissal of Józef K. by the Italian liquidator? - to the satisfaction of Józef K. ’s claim for unpaid wages?

Detrimental acts (Art. 13) concept of detrimental acts – acts by the debtor prior to the opening of proceedings (within the „suspect period”) which were detrimental to the creditors, by reducing the debtor’s assets (future insolvency estate) example: the debtor donates his house to his brother the debtor sells the wares in his warehouse below their value most insolvency provide for ineffectiveness of such acts or for the possibility of challenging them by avoidance actions

Detrimental acts (Art. 13) principle: lex fori concursus applies (Art. 4(2)(m) of the EIR) if the act is governed by the law of another Member State - subject to the „double actionability test” of Art. 13 of the EIR the act in question must be subject to avoidance actions or other ways of challenging, both: under the lex fori concursus under the law governing this act burden of proof to the contrary on the beneficiary of the act in question

Detrimental acts - example The debtor Jürgen Schuldner lives in Germany but frequently visits Gogolin (Poland) where part of his family lives. On one of his visits on 1. 10. 2010 he told his cousin Karolina Fikcyjna living in Gogolin that he is likely to go bankrupt and he needs to save his assets from the creditors. Subsequently he sold his Mercedes to Karolina for 10. 000 PLN. The market value of the comparable car at the time was ca. 60. 000 PLN. The parties chose to apply Polish law to the contract. On 20. 10. 2010 insolvency request is lodged and on 26. 11. 2010 insolvency proceedings are opened in Germany against Jürgen Schuldner. German liquidator wants to claim the car back from Karolina Fikcyjna.

Detrimental acts – answer to the example In principle, German law applies to avoidance actions (Art. 4 (2) (m) of the EIR) German law allows for avoidance of the sale, as the act was concluded less than 10 years before the insolvency petition, it is detrimental to the creditors and Karolina knew that it would be detrimental to the creditors (Section 133 (1) of the German Ins. O) Karolina may object by proving that Polish law does not allow any means of challenging the sale of the car This is not the case, as the sale would be ineffective under Polish law as the car was sold flagrantly below its value (Art. 127(1) of the BRL) and Karolina is a cousin of the debtor (Art. 128 (1) of the BRL) RESULT: German law applies (Art. 4 (2) (m) of the EIR), the German liquidator may claim the car back under Section 133 (1) of the German Ins. O