EU TWINNING PROGRAM SUPPORT TO THE PARLIAMENT OF 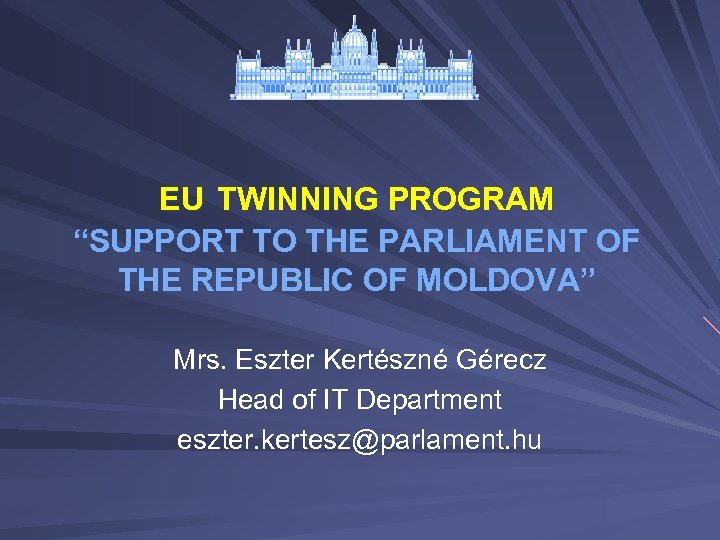 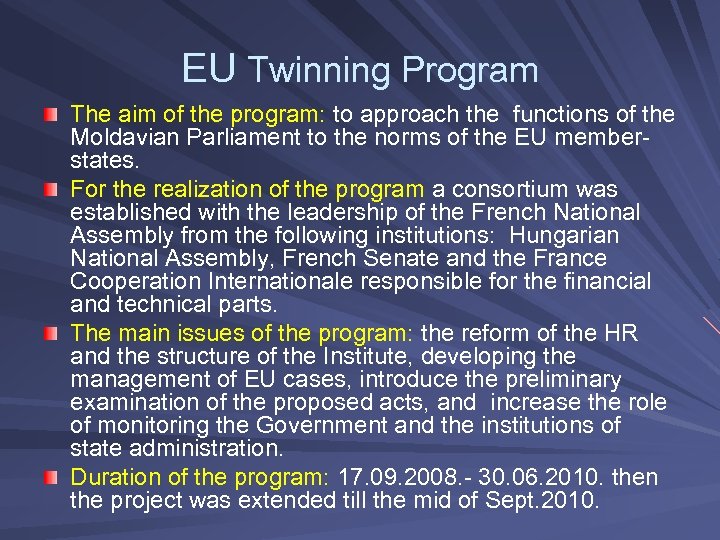 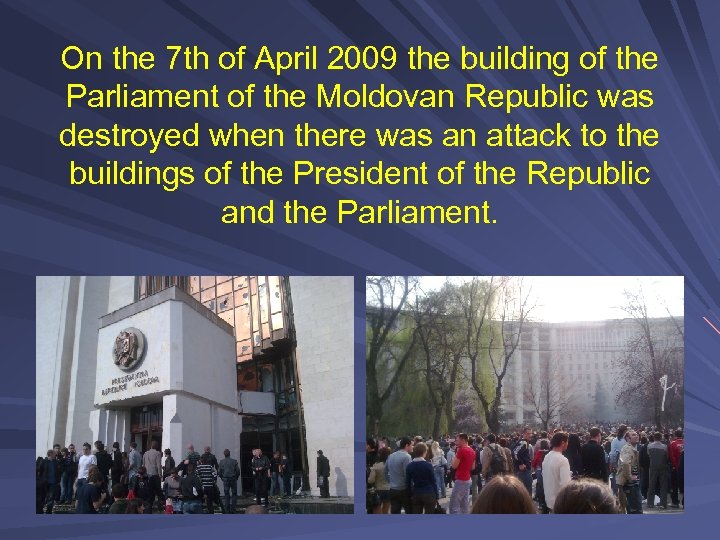 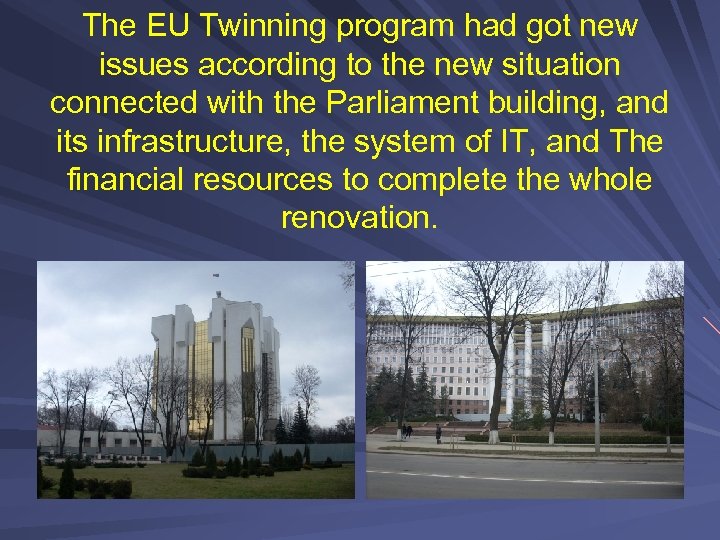 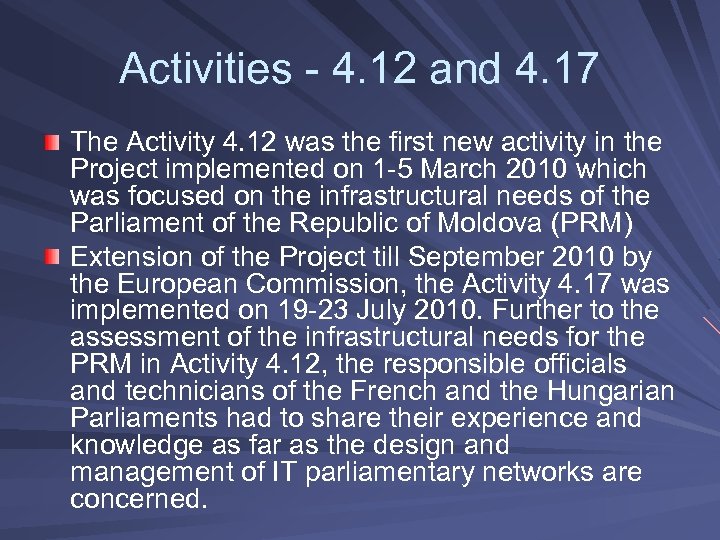 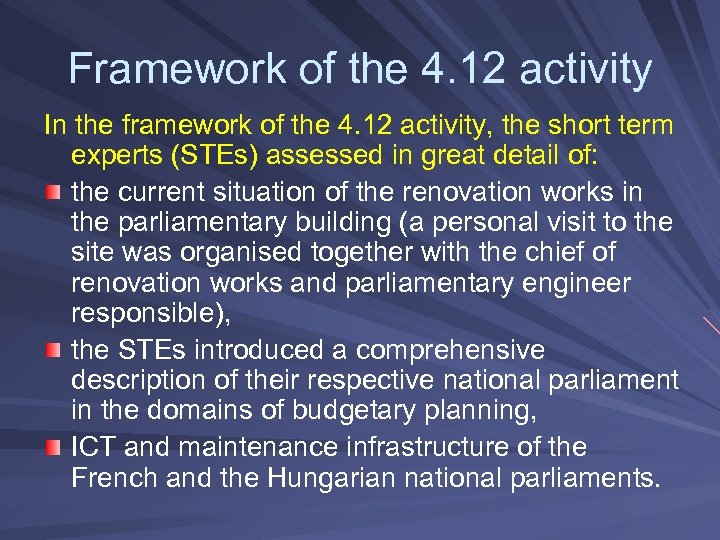 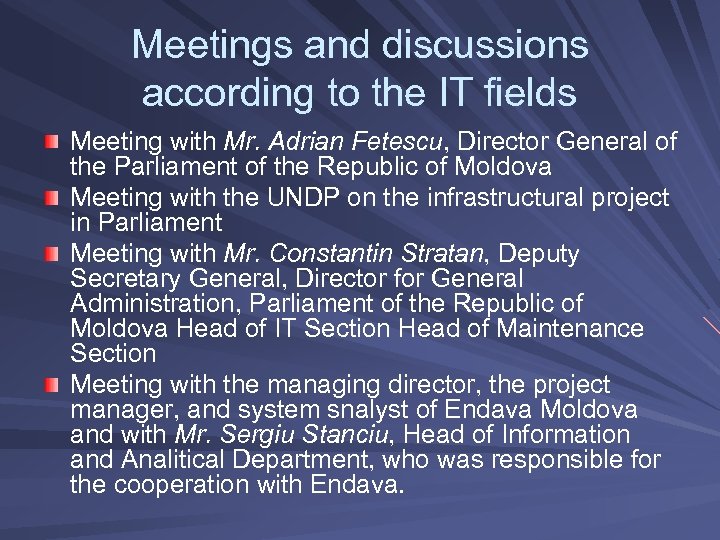 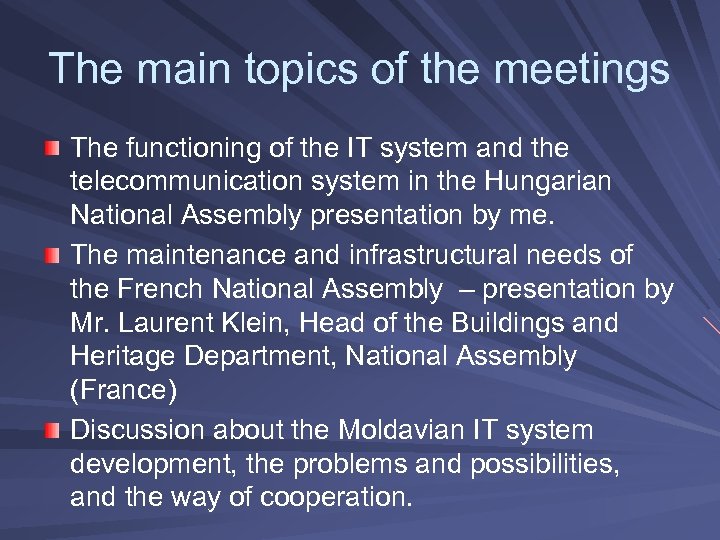 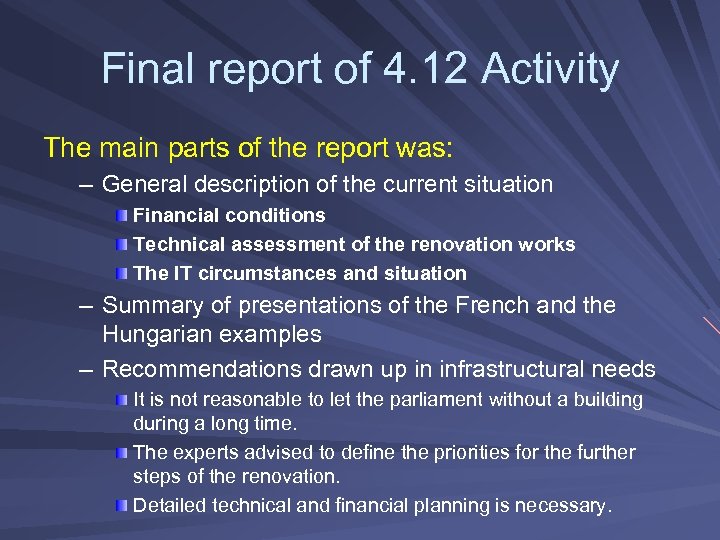 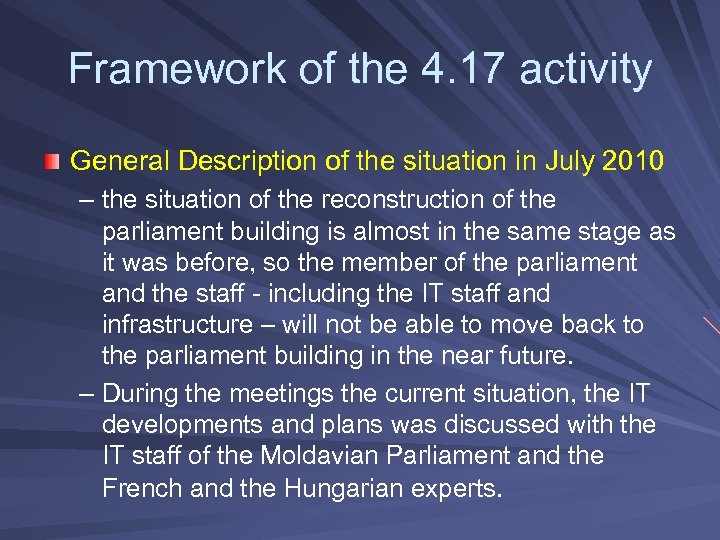 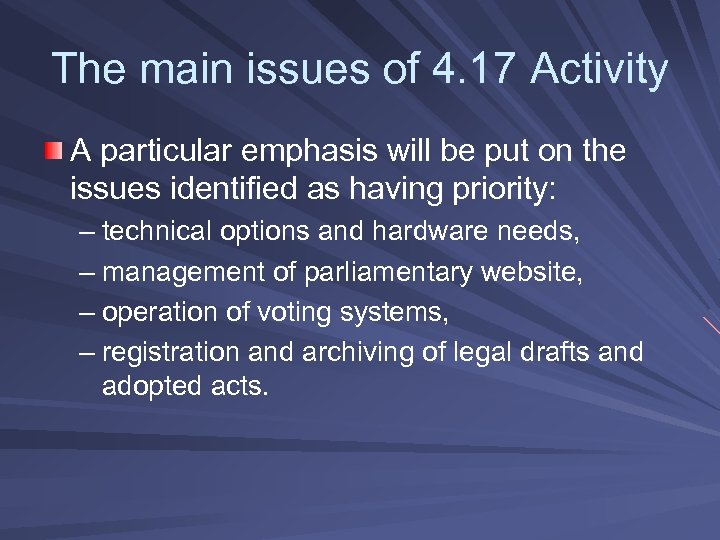 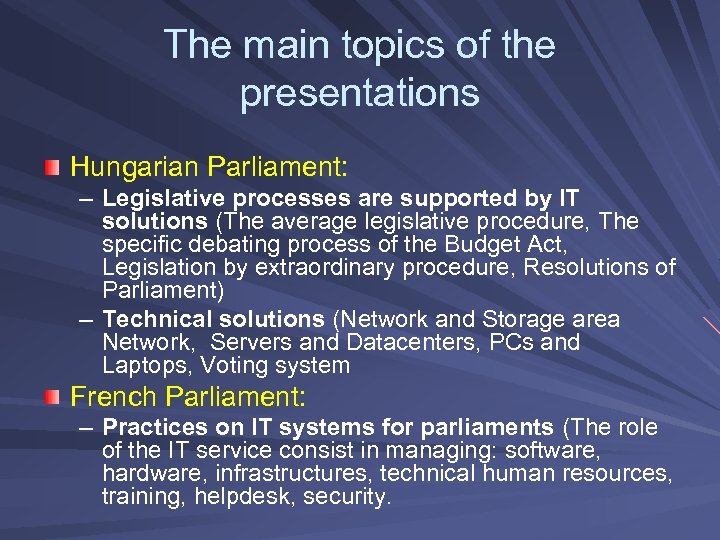 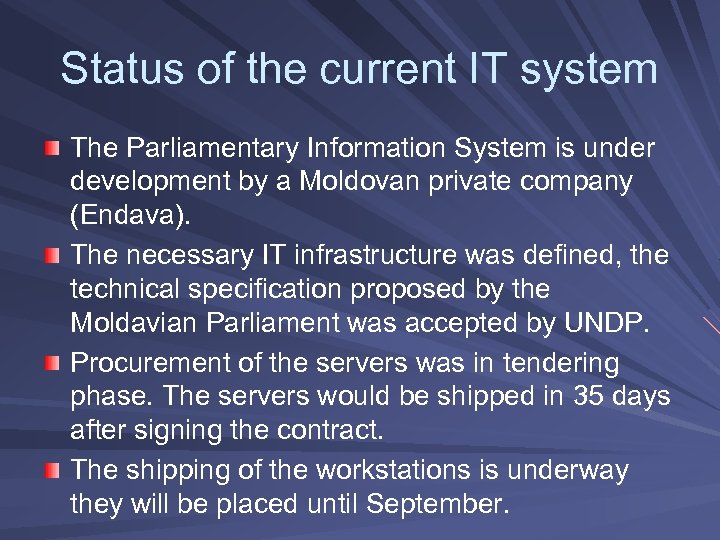 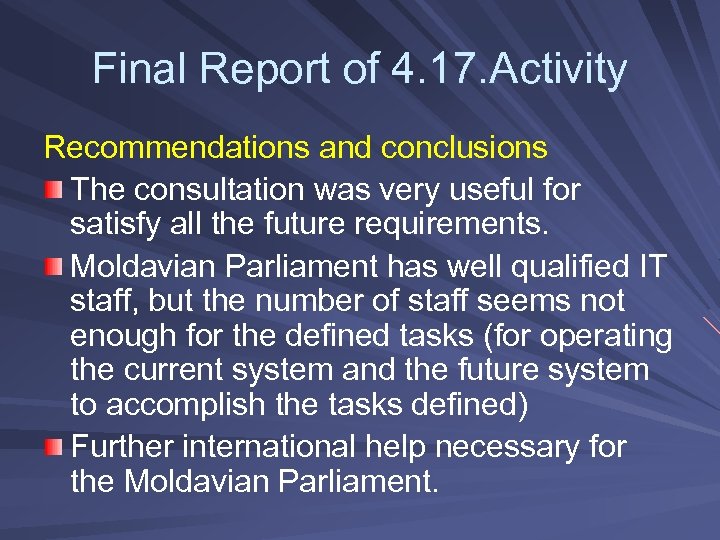 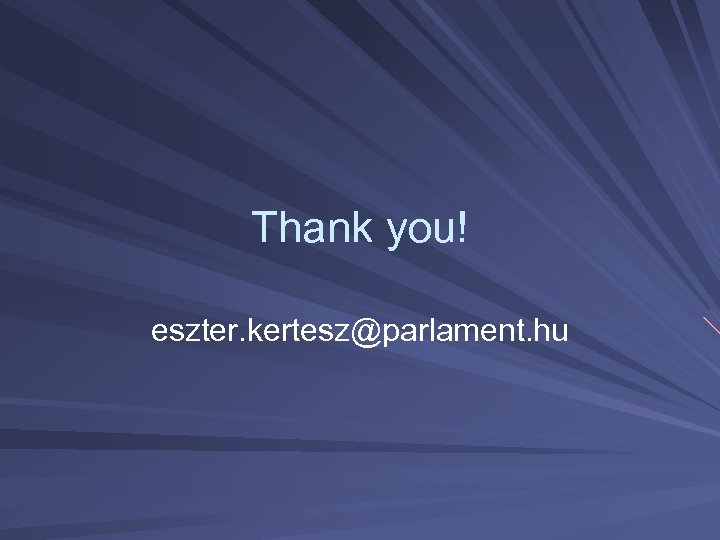 Скачать презентацию EU TWINNING PROGRAM SUPPORT TO THE PARLIAMENT OF

EU Twinning Program The aim of the program: to approach the functions of the Moldavian Parliament to the norms of the EU memberstates. For the realization of the program a consortium was established with the leadership of the French National Assembly from the following institutions: Hungarian National Assembly, French Senate and the France Cooperation Internationale responsible for the financial and technical parts. The main issues of the program: the reform of the HR and the structure of the Institute, developing the management of EU cases, introduce the preliminary examination of the proposed acts, and increase the role of monitoring the Government and the institutions of state administration. Duration of the program: 17. 09. 2008. - 30. 06. 2010. then the project was extended till the mid of Sept. 2010.

The EU Twinning program had got new issues according to the new situation connected with the Parliament building, and its infrastructure, the system of IT, and The financial resources to complete the whole renovation.

Activities - 4. 12 and 4. 17 The Activity 4. 12 was the first new activity in the Project implemented on 1 -5 March 2010 which was focused on the infrastructural needs of the Parliament of the Republic of Moldova (PRM) Extension of the Project till September 2010 by the European Commission, the Activity 4. 17 was implemented on 19 -23 July 2010. Further to the assessment of the infrastructural needs for the PRM in Activity 4. 12, the responsible officials and technicians of the French and the Hungarian Parliaments had to share their experience and knowledge as far as the design and management of IT parliamentary networks are concerned.

Framework of the 4. 12 activity In the framework of the 4. 12 activity, the short term experts (STEs) assessed in great detail of: the current situation of the renovation works in the parliamentary building (a personal visit to the site was organised together with the chief of renovation works and parliamentary engineer responsible), the STEs introduced a comprehensive description of their respective national parliament in the domains of budgetary planning, ICT and maintenance infrastructure of the French and the Hungarian national parliaments.

Meetings and discussions according to the IT fields Meeting with Mr. Adrian Fetescu, Director General of the Parliament of the Republic of Moldova Meeting with the UNDP on the infrastructural project in Parliament Meeting with Mr. Constantin Stratan, Deputy Secretary General, Director for General Administration, Parliament of the Republic of Moldova Head of IT Section Head of Maintenance Section Meeting with the managing director, the project manager, and system snalyst of Endava Moldova and with Mr. Sergiu Stanciu, Head of Information and Analitical Department, who was responsible for the cooperation with Endava.

Final report of 4. 12 Activity The main parts of the report was: – General description of the current situation Financial conditions Technical assessment of the renovation works The IT circumstances and situation – Summary of presentations of the French and the Hungarian examples – Recommendations drawn up in infrastructural needs It is not reasonable to let the parliament without a building during a long time. The experts advised to define the priorities for the further steps of the renovation. Detailed technical and financial planning is necessary.

The main issues of 4. 17 Activity A particular emphasis will be put on the issues identified as having priority: – technical options and hardware needs, – management of parliamentary website, – operation of voting systems, – registration and archiving of legal drafts and adopted acts.

The main topics of the presentations Hungarian Parliament: – Legislative processes are supported by IT solutions (The average legislative procedure, The specific debating process of the Budget Act, Legislation by extraordinary procedure, Resolutions of Parliament) – Technical solutions (Network and Storage area Network, Servers and Datacenters, PCs and Laptops, Voting system French Parliament: – Practices on IT systems for parliaments (The role of the IT service consist in managing: software, hardware, infrastructures, technical human resources, training, helpdesk, security.

Status of the current IT system The Parliamentary Information System is under development by a Moldovan private company (Endava). The necessary IT infrastructure was defined, the technical specification proposed by the Moldavian Parliament was accepted by UNDP. Procurement of the servers was in tendering phase. The servers would be shipped in 35 days after signing the contract. The shipping of the workstations is underway they will be placed until September.

Final Report of 4. 17. Activity Recommendations and conclusions The consultation was very useful for satisfy all the future requirements. Moldavian Parliament has well qualified IT staff, but the number of staff seems not enough for the defined tasks (for operating the current system and the future system to accomplish the tasks defined) Further international help necessary for the Moldavian Parliament.