Ethnicity and Educational Attainment 2 In 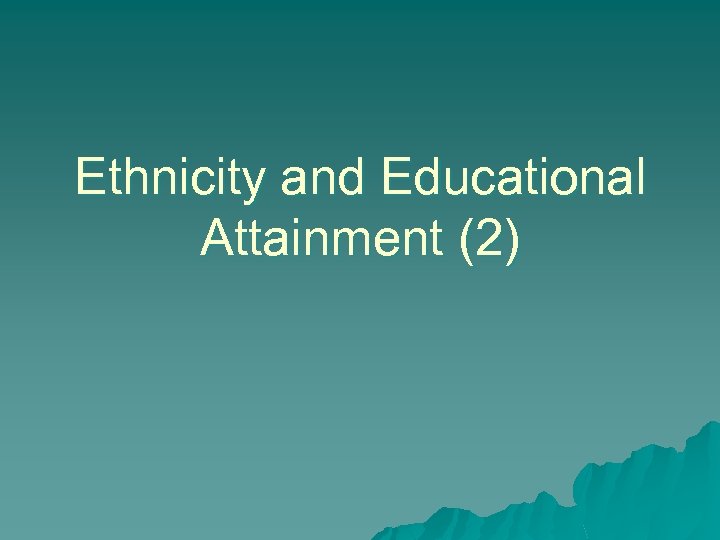 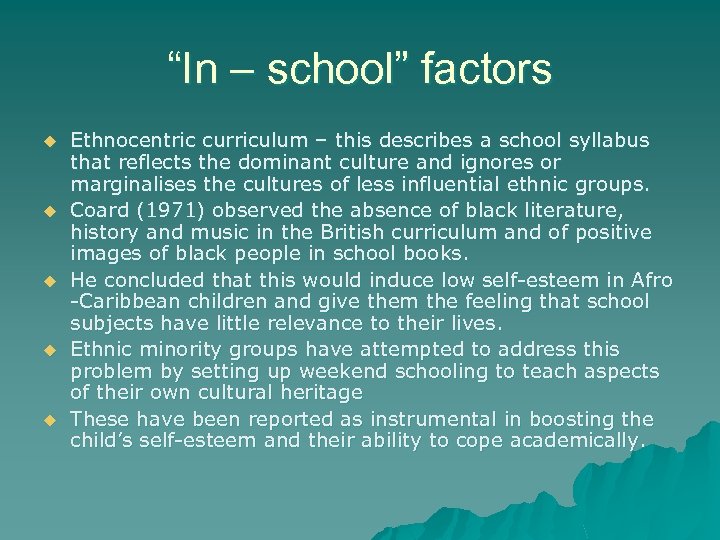 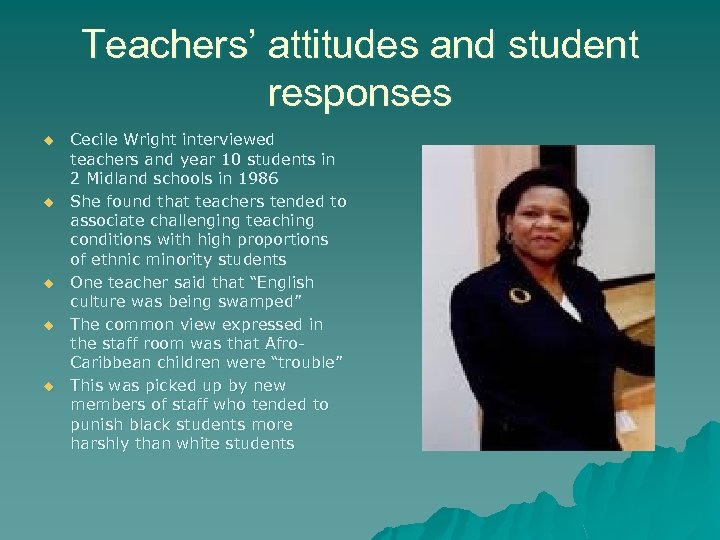 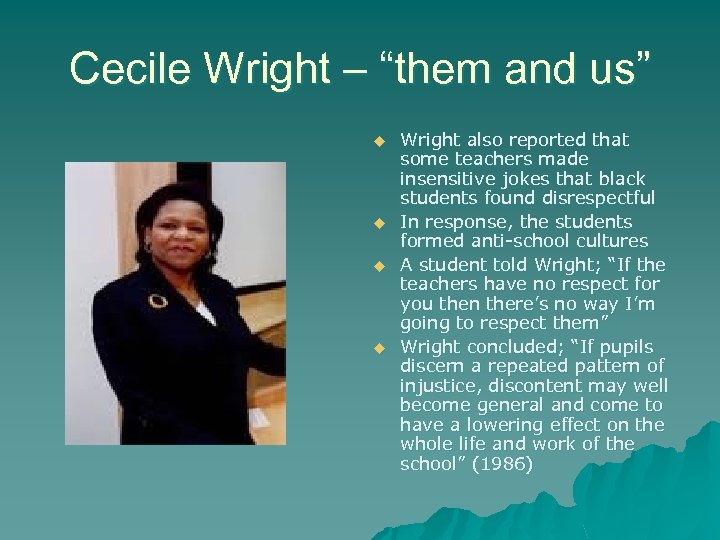 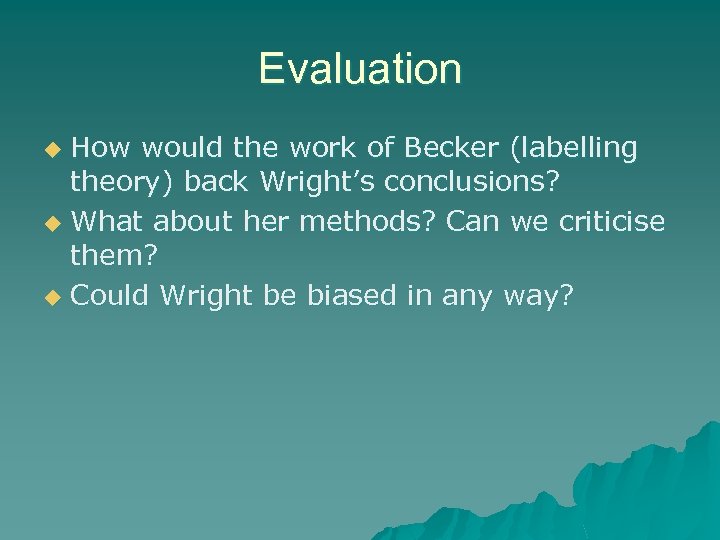 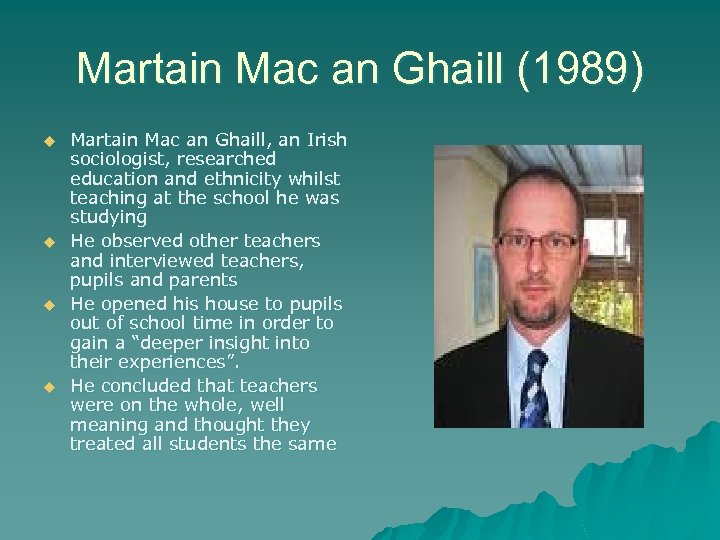 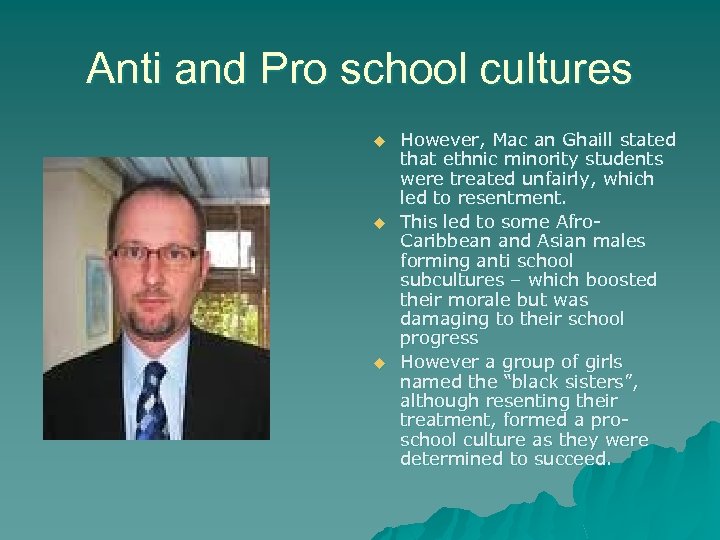 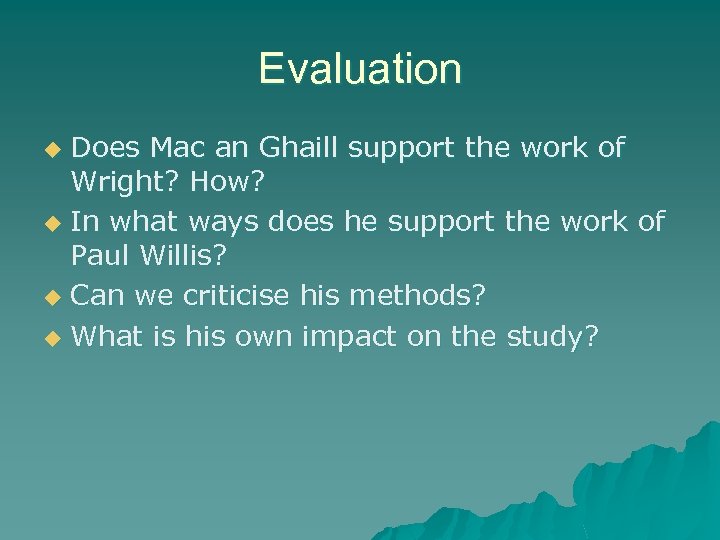 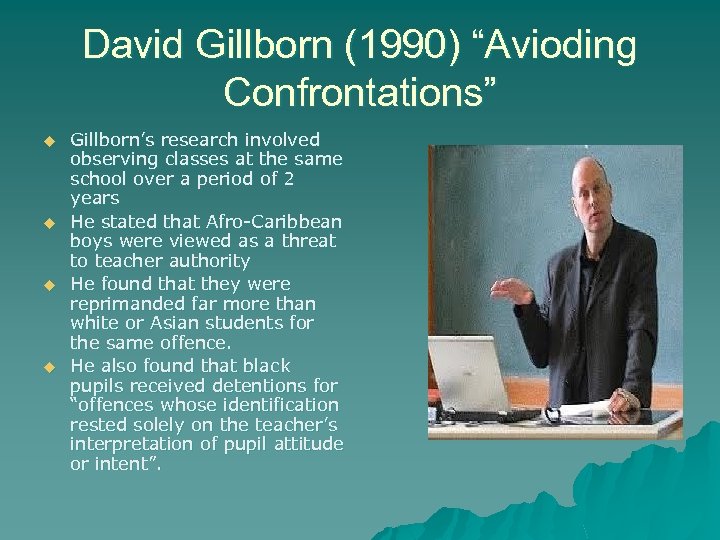 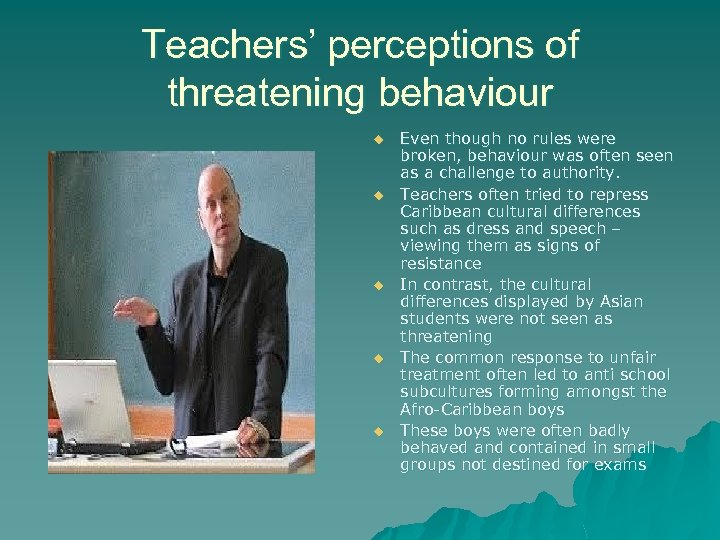 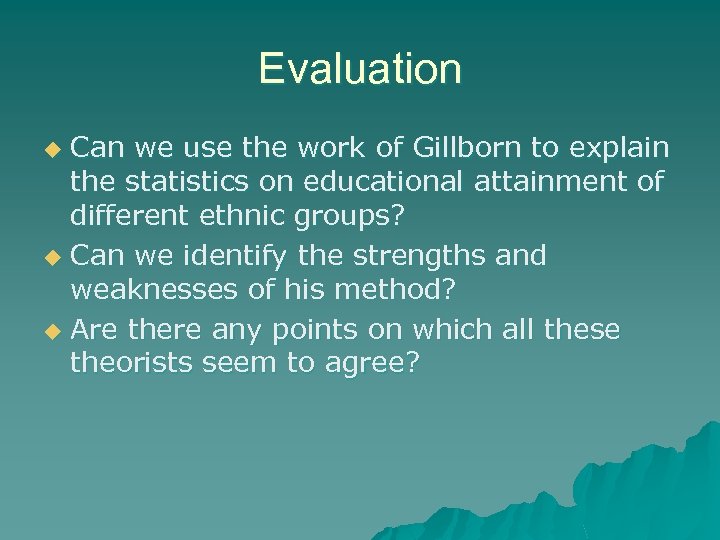 “In – school” factors u u u Ethnocentric curriculum – this describes a school syllabus that reflects the dominant culture and ignores or marginalises the cultures of less influential ethnic groups. Coard (1971) observed the absence of black literature, history and music in the British curriculum and of positive images of black people in school books. He concluded that this would induce low self-esteem in Afro -Caribbean children and give them the feeling that school subjects have little relevance to their lives. Ethnic minority groups have attempted to address this problem by setting up weekend schooling to teach aspects of their own cultural heritage These have been reported as instrumental in boosting the child’s self-esteem and their ability to cope academically.

Teachers’ attitudes and student responses u u u Cecile Wright interviewed teachers and year 10 students in 2 Midland schools in 1986 She found that teachers tended to associate challenging teaching conditions with high proportions of ethnic minority students One teacher said that “English culture was being swamped” The common view expressed in the staff room was that Afro. Caribbean children were “trouble” This was picked up by new members of staff who tended to punish black students more harshly than white students

Cecile Wright – “them and us” u u Wright also reported that some teachers made insensitive jokes that black students found disrespectful In response, the students formed anti-school cultures A student told Wright; “If the teachers have no respect for you then there’s no way I’m going to respect them” Wright concluded; “If pupils discern a repeated pattern of injustice, discontent may well become general and come to have a lowering effect on the whole life and work of the school” (1986)

Evaluation How would the work of Becker (labelling theory) back Wright’s conclusions? u What about her methods? Can we criticise them? u Could Wright be biased in any way? u

Martain Mac an Ghaill (1989) u u Martain Mac an Ghaill, an Irish sociologist, researched education and ethnicity whilst teaching at the school he was studying He observed other teachers and interviewed teachers, pupils and parents He opened his house to pupils out of school time in order to gain a “deeper insight into their experiences”. He concluded that teachers were on the whole, well meaning and thought they treated all students the same

Anti and Pro school cultures u u u However, Mac an Ghaill stated that ethnic minority students were treated unfairly, which led to resentment. This led to some Afro. Caribbean and Asian males forming anti school subcultures – which boosted their morale but was damaging to their school progress However a group of girls named the “black sisters”, although resenting their treatment, formed a proschool culture as they were determined to succeed.

David Gillborn (1990) “Avioding Confrontations” u u Gillborn’s research involved observing classes at the same school over a period of 2 years He stated that Afro-Caribbean boys were viewed as a threat to teacher authority He found that they were reprimanded far more than white or Asian students for the same offence. He also found that black pupils received detentions for “offences whose identification rested solely on the teacher’s interpretation of pupil attitude or intent”.

Teachers’ perceptions of threatening behaviour u u u Even though no rules were broken, behaviour was often seen as a challenge to authority. Teachers often tried to repress Caribbean cultural differences such as dress and speech – viewing them as signs of resistance In contrast, the cultural differences displayed by Asian students were not seen as threatening The common response to unfair treatment often led to anti school subcultures forming amongst the Afro-Caribbean boys These boys were often badly behaved and contained in small groups not destined for exams

Evaluation Can we use the work of Gillborn to explain the statistics on educational attainment of different ethnic groups? u Can we identify the strengths and weaknesses of his method? u Are there any points on which all these theorists seem to agree? u