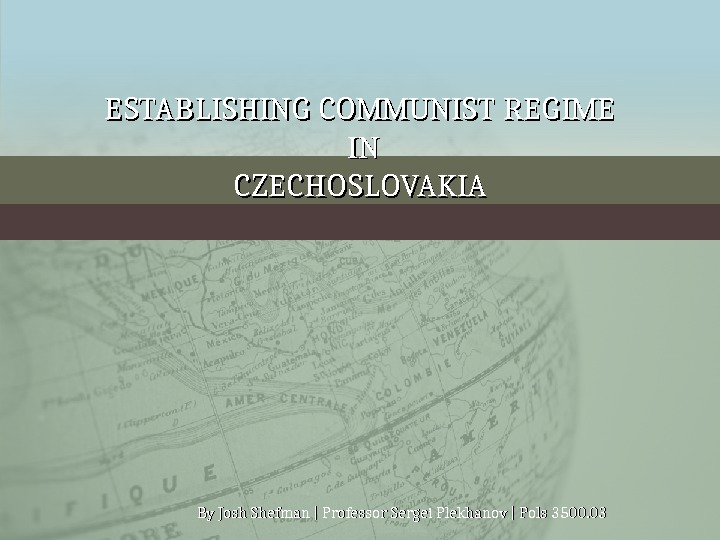 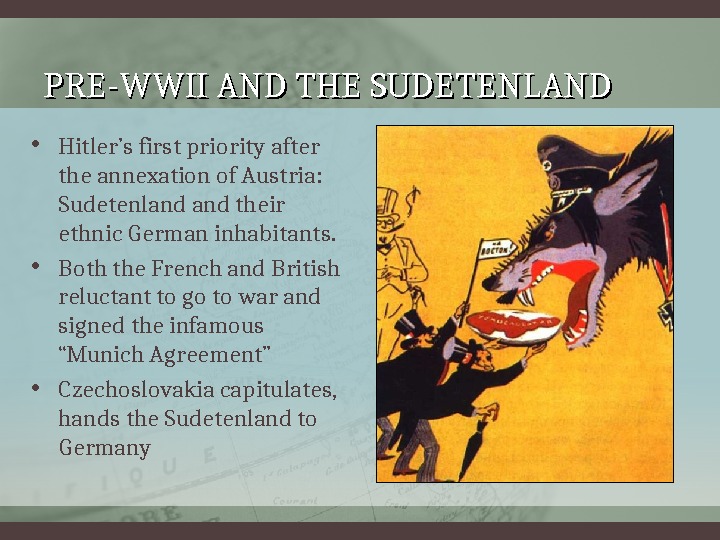 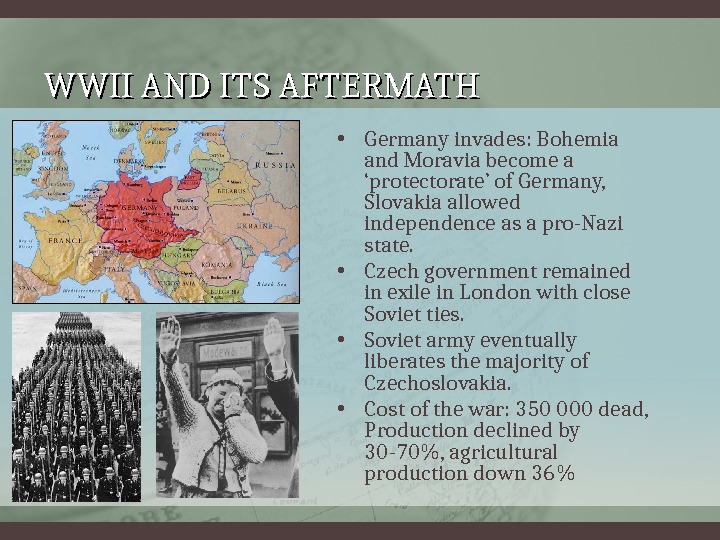 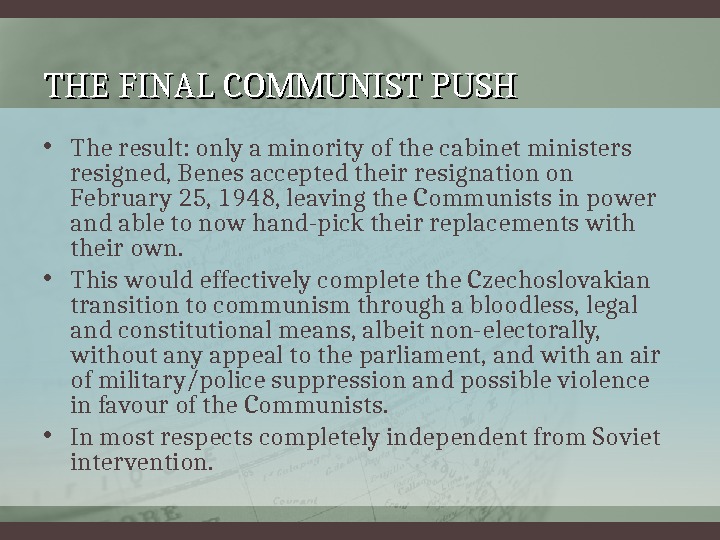 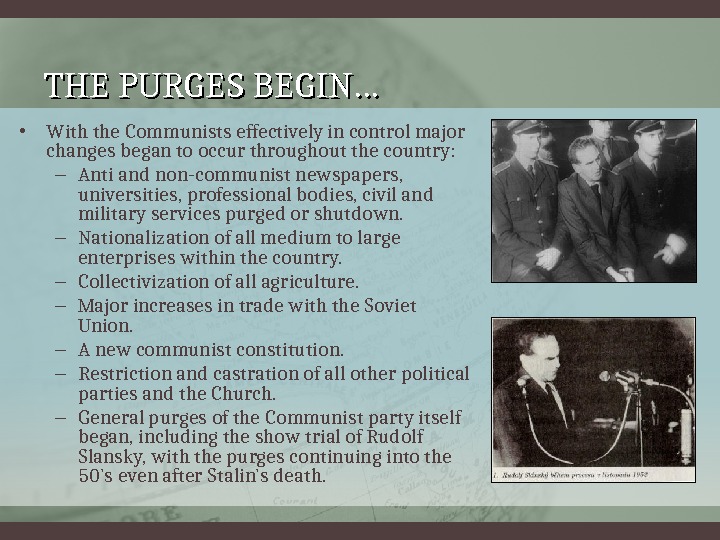 Скачать презентацию ESTABLISHING COMMUNIST REGIME IN IN CZECHOSLOVAKIA By

PRE-WWII AND THE SUDETENLAND • Hitler’s first priority after the annexation of Austria: Sudetenland their ethnic German inhabitants. • Both the French and British reluctant to go to war and signed the infamous “Munich Agreement” • Czechoslovakia capitulates, hands the Sudetenland to Germany

WWII AND ITS AFTERMATH • Germany invades: Bohemia and Moravia become a ‘protectorate’ of Germany, Slovakia allowed independence as a pro-Nazi state. • Czech government remained in exile in London with close Soviet ties. • Soviet army eventually liberates the majority of Czechoslovakia. • Cost of the war: 350 000 dead, Production declined by 30 -70%, agricultural production down 36%

THE AFTERMATH CONT’D • Czech shift towards a more pro-Soviet foreign policy with Beneš realizing the importance of the USSR for security reasons. • Benes wanted Czechoslovakia to act as a bridge between the East and West. • Worked with the Communists in exile in Moscow on the structure of post-war Czechoslovakia. • Czechoslovakia would be reformed into a semi-federalist state including Slovakia.

THE DOWNFALL OF DEMOCRACY • Premiership went to the Communist leader Klement Gottwald. • At the same time following occured. – May 1946: French and Italian communist parties kicked out of their national coalitions. – June 46: US Marshall Plan being touted: Stalin replies that Czechoslovakia must rescind its decision to be apart of it and follows through. – September 46: At the founding of the Cominform, Czech Communist party criticized heavily for their failure “to resolve the question of power”

CABINET TROUBLES AND THE COMMUNIST SEIZURE OF POWER • Communist popularity began to decrease as another election was approaching. • Nevertheless, the Communist minister of the interior began to ‘purge’ the police organization of the remaining non-communists. • February 1948: Non-Communist cabinet ministers pass a resolution to reverse the intended purge. • February 20: Both the interior minister and the Communist party itself ignore the order, and in response 12 cabinet ministers resign hoping for the fall of the cabinet which would never come.

THE FINAL COMMUNIST PUSH • The result: only a minority of the cabinet ministers resigned, Benes accepted their resignation on February 25, 1948, leaving the Communists in power and able to now hand-pick their replacements with their own. • This would effectively complete the Czechoslovakian transition to communism through a bloodless, legal and constitutional means, albeit non-electorally, without any appeal to the parliament, and with an air of military/police suppression and possible violence in favour of the Communists. • In most respects completely independent from Soviet intervention.

THE PURGES BEGIN… • With the Communists effectively in control major changes began to occur throughout the country: – Anti and non-communist newspapers, universities, professional bodies, civil and military services purged or shutdown. – Nationalization of all medium to large enterprises within the country. – Collectivization of all agriculture. – Major increases in trade with the Soviet Union. – A new communist constitution. – Restriction and castration of all other political parties and the Church. – General purges of the Communist party itself began, including the show trial of Rudolf Slansky, with the purges continuing into the 50’s even after Stalin’s death.